Chile’s Poetic Bahá’í Temple by Hariri Pontarini
Designed to last for an eternity, the remarkable building is reaching completion. Architect Siamak Hariri discusses its creation and why a small temple in the Andes is the most important project of his career. 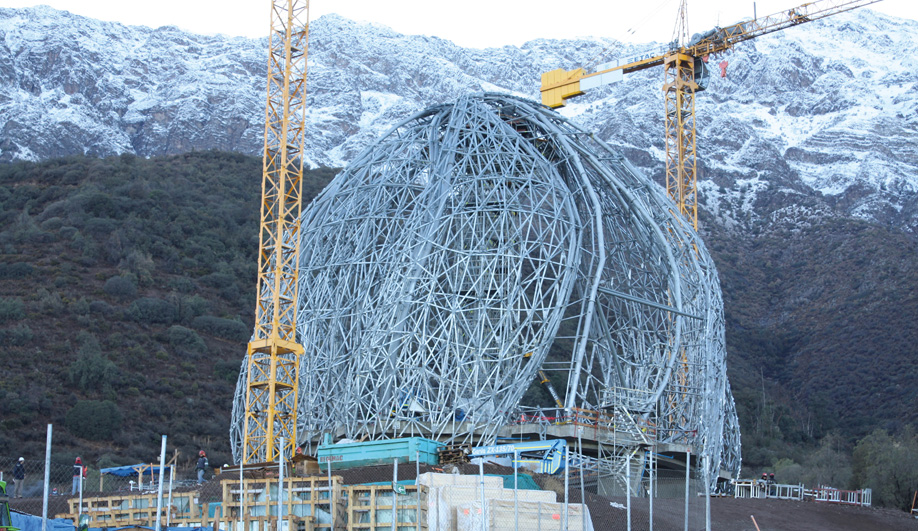 Designed to last for an eternity, the remarkable building is reaching completion. Architect Siamak Hariri discusses its creation and why a small temple in the Andes is the most important project of his career.

“Know whom you’re speaking to,” says Siamak Hariri, the soft-spoken founding partner at Toronto’s Hariri Pontarini Architects. For Hariri, “the mother factor” is paramount. As he explains, “When I was at Yale, a secur­ity guard at Louis Kahn’s University Art Gallery would run his hand along the concrete, and you got the sense he was moved by the light. Making that connection, finding that sense of humanity, is really important in architecture. If you’re building a temple and your mother doesn’t feel comfortable praying in it, then you have a problem.” 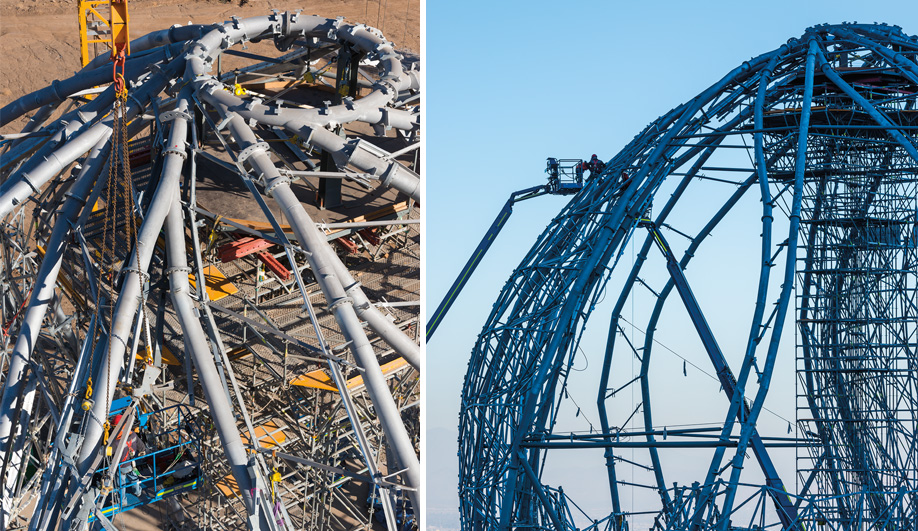 Hariri’s firm, located on the first floor of a reclaimed warehouse on Toronto’s King Street West, is all wood and brick, with intensely concentrating employees filling rows of desks. But that sense of humanity he describes is not forgotten here either. I make a joke about actually seeing, amid the sea of monitors, a pencil sitting on a desk, and he says simply, “The pencil is my best friend,” then points to a variety of sketches pinned to the wall. 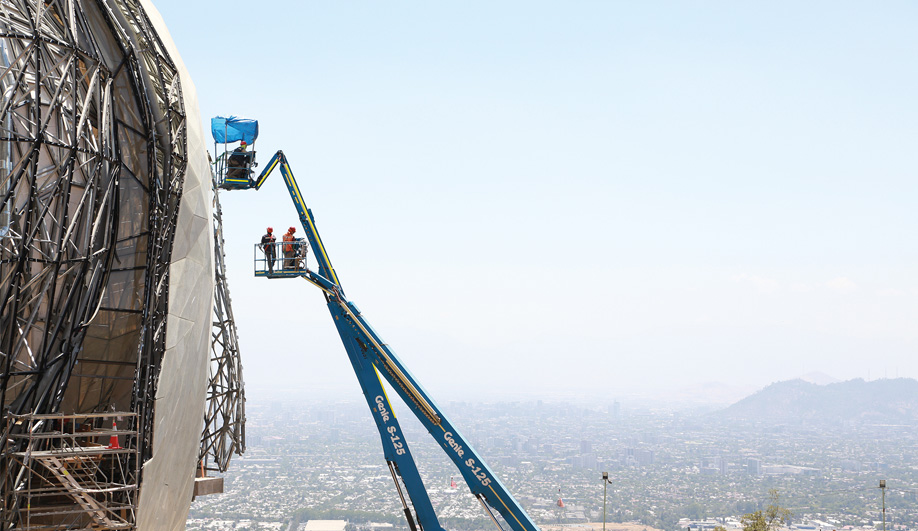 A model of his most ambitious project, the Bahá’í Temple of South America, is modestly mounted on a nondescript table nearby. The commission, won through an international competition, was 13 years in the making, nine of which were devoted to development before construction could start. Over that time, the firm has worked closely with companies from all over the world, including engineering firm Simpson Gumpertz & Heger in the U.S. and German-based Gartner. Taking time to do the project was the only way it could be completed for under $30 million, says Hariri, and his clients understood that the project would require time. “Imagine that,” he says, shaking his head in humility and astonishment. “I had the best client in the world.”

The biggest challenge was finding the right location. Initially, the temple was to be set in the centre of Santiago, as part of bicentennial celebrations planned for 2018. But the decision garnered little popular support, and the present site in the Andes foothills above the Chilean capital was finally selected. A bulbous, shimmering whirl of translucent marble and glass set amid spacious gardens, the temple is a marvel of exquisite design and state-of-the-art engineering, the latter out of necessity: the mandate for the temple, located in an earthquake zone, was that it be built to last for 400 years. “We couldn’t even use silicone for a primary seal, because the technology has only been around for 25 years,” says Hariri. 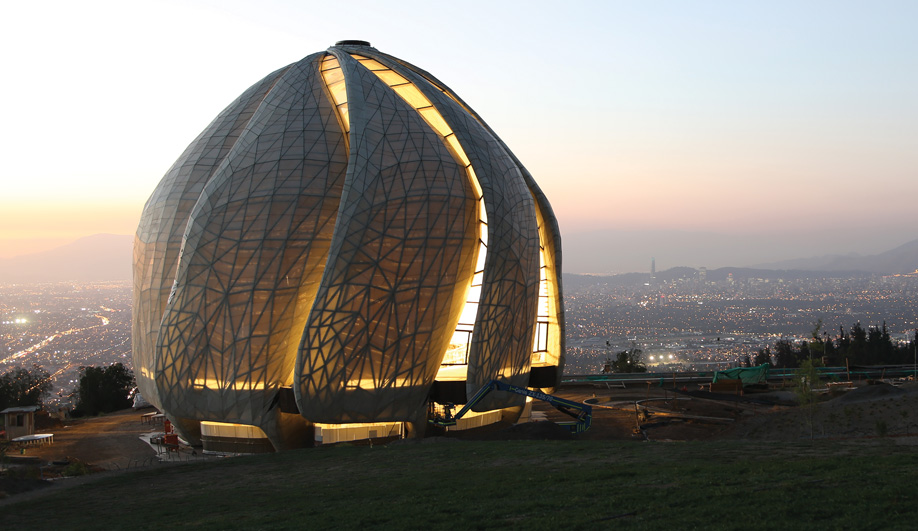 Of the few constraints placed on the design, one was that the building should have nine sides, so that the temple is welcoming in all directions and to people of different faiths.

Mounted on seismic isolation pads, the building stands 30 metres high, with an elaborate metal exoskeleton that supports nine torqued sails of white marble and white glass panels. Each of the 2,000 cast panels is unique, so the seismic load for every one of them had to be tested. The sails converge above a single open space and mezzanine at an apex 2.7 metres wide, where the Bahá’í symbol – “the greatest name” – hangs beneath a clear glass oculus. In all of these elements, light is of the essence. The great slabs appear to collect light during the day and, come night, to disperse it. The temple appears otherworldly, yet of the mountainside and belonging to it.

“It’s not easy to put something up against the Andes,” says Hariri. His tone is confiding, as if what is patently obvious would somehow not be. When I make the comparison to the Shrine of the Báb in Haifa, designed by another Canadian architect, William Sutherland Maxwell, Hariri is delighted. For him, the mother factor – that conversation with people – is occurring at the same time as another dialogue he is having with “the greats.” 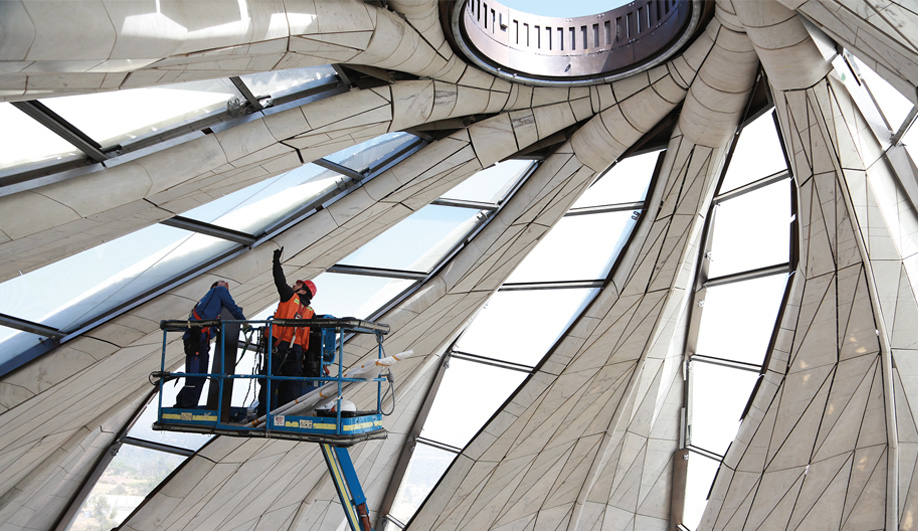 “I have always been impressed that people like Kazuo Shinohara and Frank Gehry are looking over their shoulders and knowing who their greats were,” he says. “You’re always terrorized by the artistic process, of not knowing if you’re nothing but a fraud, then finding yourself turning to the greats and asking, Am I doing okay? Acknowledging that nothingness is helpful, because it actually sets you up to push for excellence.

“What I love about the Shrine of the Báb,” he continues, “is how it holds Mount Carmel, the mountain behind it. That is something very hard for a small building to do, and it’s what I really wanted in the temple. From a long way off, it fits into the profile of the Andes, but at the same time I didn’t want it to be so monumental that it makes a person feel like nothing.” 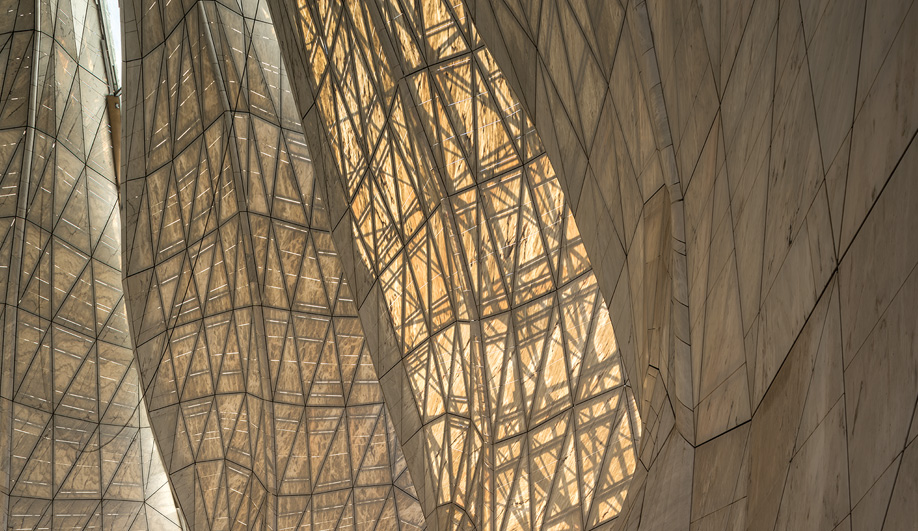 I suggest that from afar it appears like a magnolia imminently to bloom. “I’m glad you are able to see it from your own perspective,” says Hariri – words that, coming from a less gracious speaker, might seem dismissive. Rather than the petals of my imagining, he prefers to speak of the nine surfaces as “wings.” Later on, he compares them to gentle folds of cloth, the imperfections of certain objects like pottery, or the curves of the human face.

Nine, he tells me, is a mystical number in the Bahá’i faith, one that represents a state of perfection. Of the few constraints placed on the design, one specified that the temple should have nine sides so that it is welcoming in all directions and to people of different faiths. If the temple looked like a mosque or a church, then certain people wouldn’t come in, he says. The challenge was to create the feeling of a sacred place, but at the same time one that is architecturally comfortable. 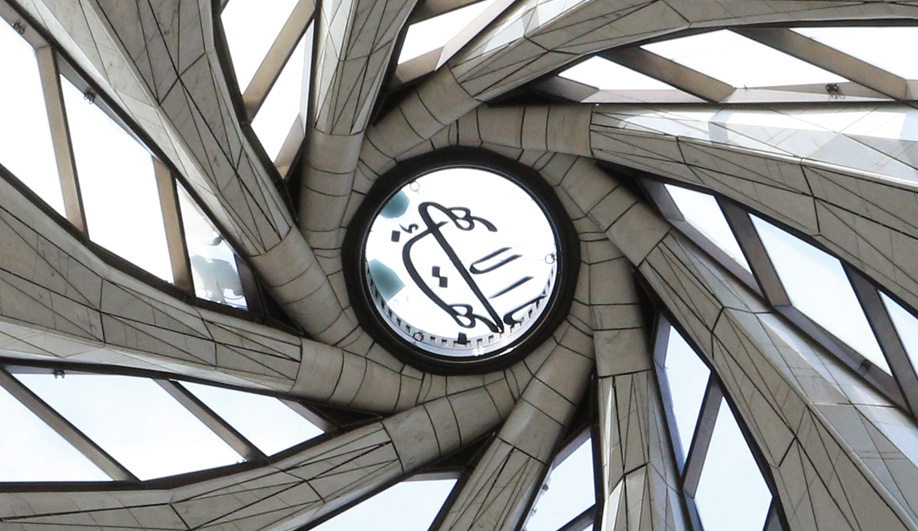 To that end, stepped pathways, water pools and gardens surround the temple, coursing out from its nonagonal geometry. The gardens, by Chilean landscape architect Juan Grimm, are planted with indigenous species that require little maintenance or watering, and as you get closer to the temple the plant life becomes more refined and you discover all sorts of exotic flowers.

We discuss what word might best encapsulate the intent of the approach. “There are a lot of ways in which monumental architecture deliberately seeks to make people feel small,” says Hariri, “but the feeling I wanted was the opposite. The steps are narrow, with gardens on all sides, but you can take your time in the approach. You can rest at the very top or on the side, or you can take a giant arc and avoid the steps entirely.” It is his hope that once people reach the temple at their desired pace, they will look up and think they are gazing at the heavens. 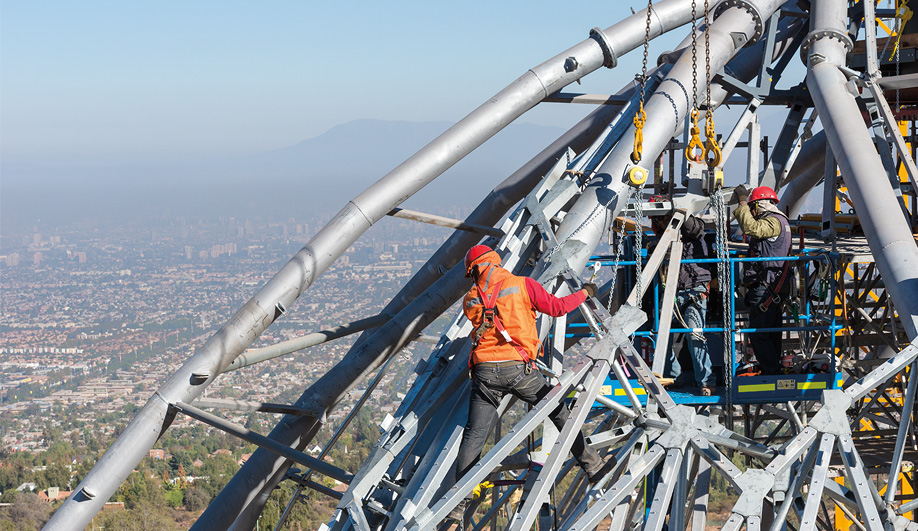 To meet that end, he wanted to create a sense of embodied light that somehow touches the material and causes it to come alive. At first, the firm tried alabaster for the exterior cladding, but it was ruled out, as Santiago’s pollution would have necessitated high-pressure cleaning, which would have quickly eroded the stone. Instead, marble and glass were used, the former because it is stronger than alabaster and able to be cut very thinly. The problem was that most marble is, generally speaking, a little orange, except for one vein found in a quarry in Portugal. The owners had been holding the marble in reserve for seven generations, but when the project was explained to them they let it go. “You have to see it. The light kisses it, and the veining becomes alive. It’s just crazy,” says Hariri.

The cast glass used on the outermost layer, which was developed by Toronto artist Jeff Goodman (who died in 2012), took over a year to finesse. Hundreds of samples were made that were either too thick or too yellow or too chunky and breakable. Eventually, Goodman turned to borosilicate (the stuff of Petri dishes and test tubes), which can get extremely hot, have ice thrown on it and not crack. The studio began breaking the glass rods into a certain pattern, then melting them to just the right point where they would become clear but retain the pattern. 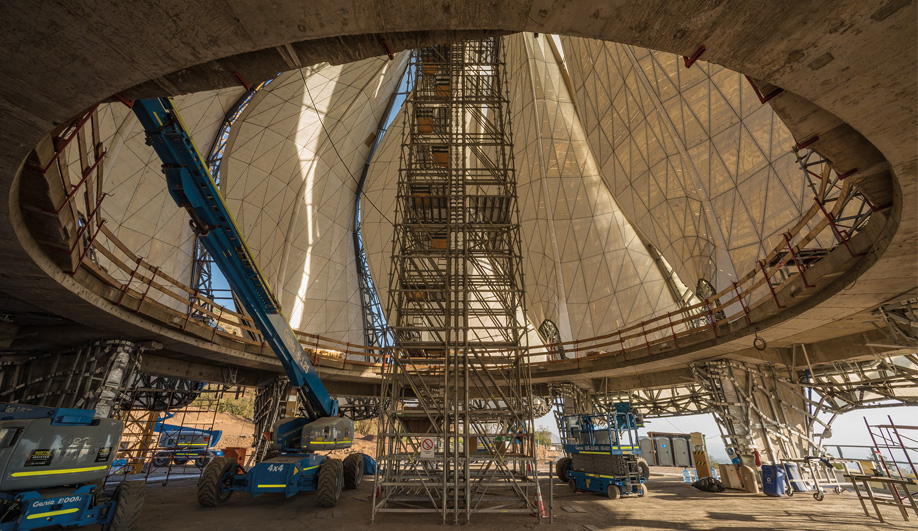 As we discuss Hariri’s penchant for materials to endure, another conversation with the sacred – with time – emerges. I ask him if wanting the work to last, and the sheer audacity of building a temple for the ages, ever leads him to worry about hubris. “You try to fight it, but there is this feeling of trying to touch perfection, and of course this is always beyond your reach.

“This is the first Bahá’í temple in all of South America,” he says introspectively. “It’s like building in the very first days of Christianity or Judaism or Islam, so you can’t just be cowering, and you’re constantly begging that you are connected to some greater will. Believe me, I’m terrified.” 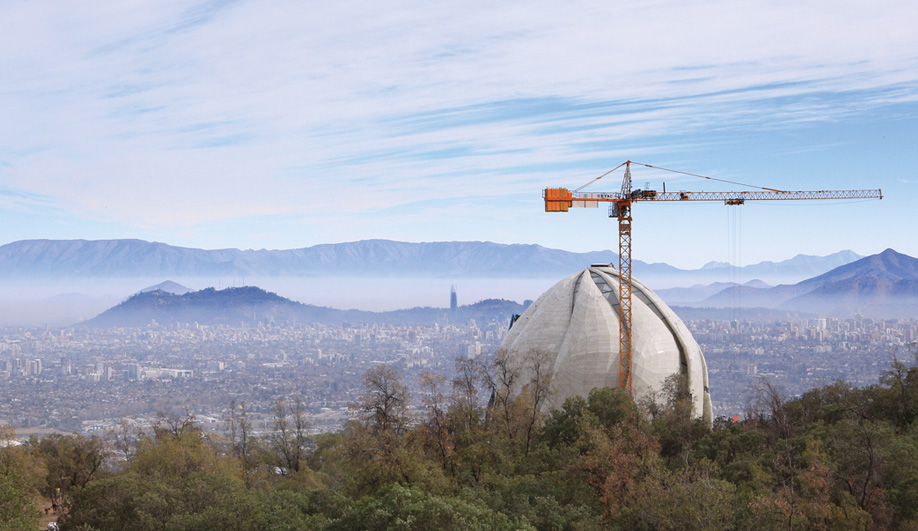