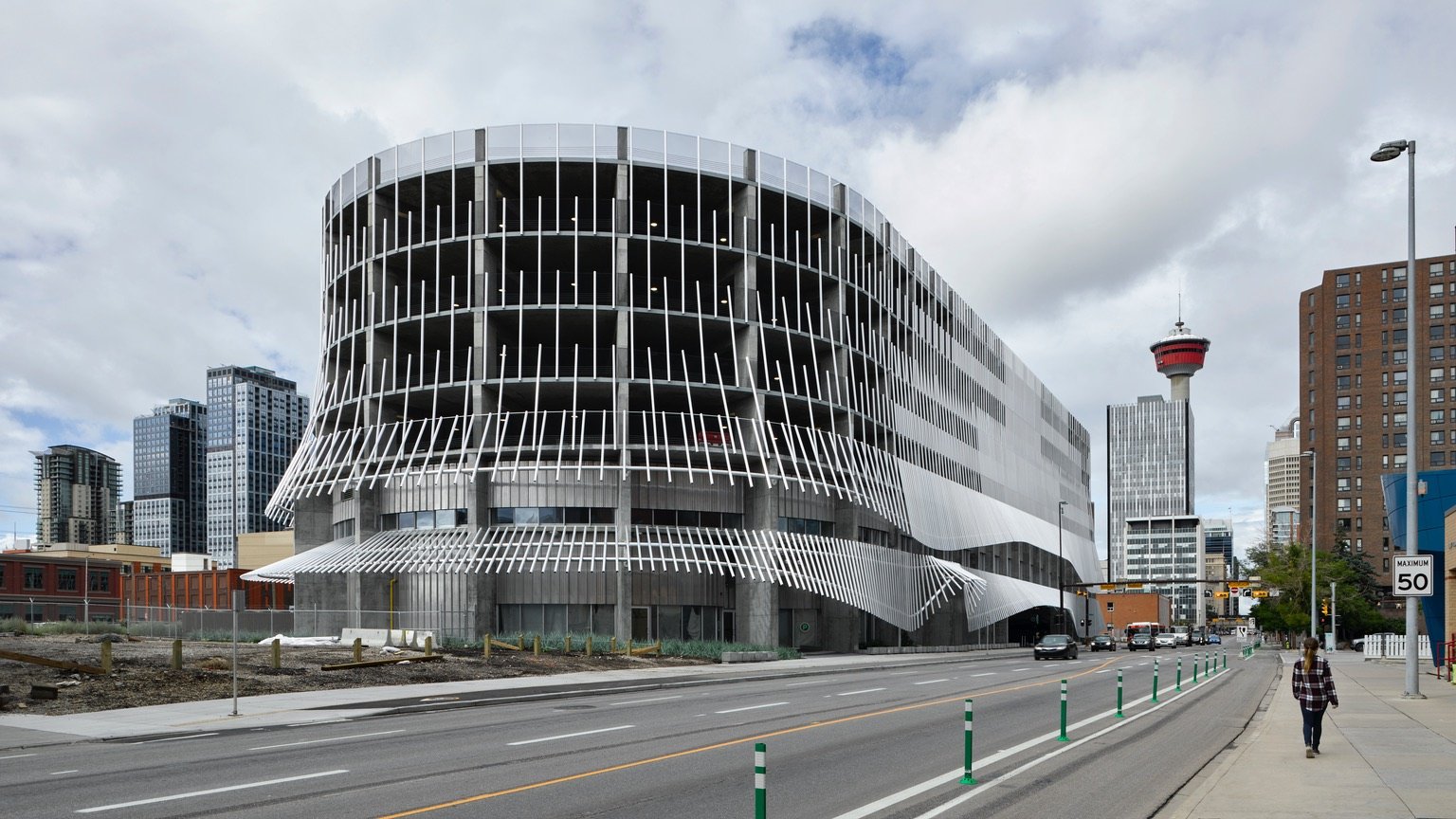 Calgary’s New Parkade Has Bold Plans For the Road Ahead

Over the past decade, two of Calgary’s newest landmarks — Central Library by Snøhetta and the National Music Centre by Allied Works — have quietly transformed a stretch of the city’s East Village into an architectural mecca. Now, the neighbourhood has welcomed its biggest surprise yet: a seven-storey parking facility. Granted, this is no ordinary garage. Designed by 5468796 Architecture and Kasian, the 9th Avenue Parkade & Platform Innovation Centre is Calgary Parking Authority’s last stand-alone construction project, and the city’s first building to be conceived with its future adaptive re-use already in mind.

Despite a dwindling demand for parking in downtown Calgary, a parkade was nevertheless mandated by the city’s East Village redevelopment plan. The building’s design team thus embarked on a quest to design a 26,500-square-metre facility whose raison d’être could extend beyond the obsolescent idea of “a cathedral for cars” and better adapt to the needs of the 21st century.

“The design was not to preclude future conversion,” explains Katherine Robinson, the principal in charge of the project at Kasian. Instead, it embraces it. With every decision, Robinson and her collaborators tried to address the requirements of a parkade while also anticipating other possible uses down the road, such as residential or office space. 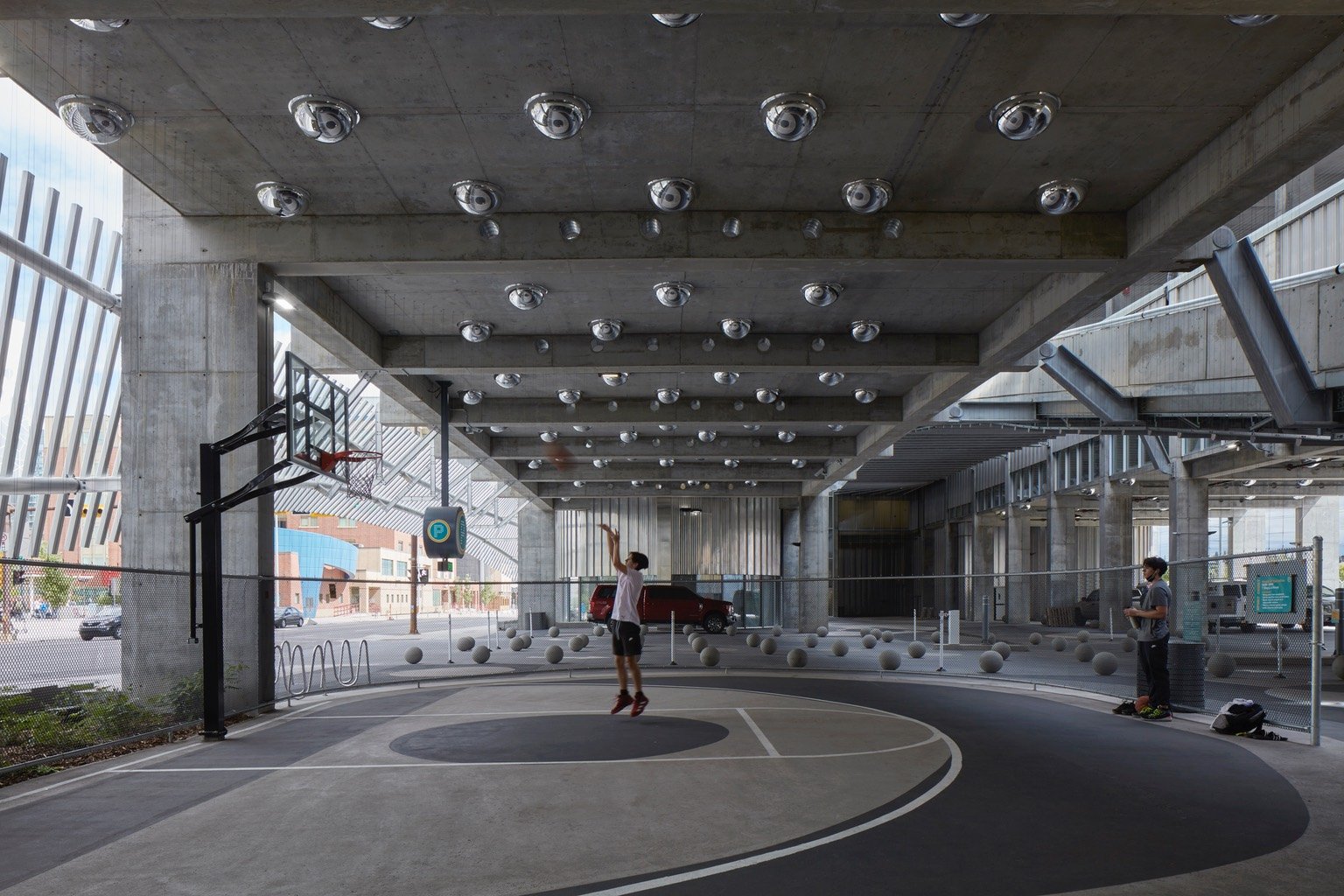 With an oblong doughnut shape and a striking porous “shroud” of over 1,000 aluminum pipes that can be disassembled for re-use or recycling, the facility also integrates unexpected amenities like a start-up incubator and basketball court that turns the ground floor into an athletic playground. Across this sheltered plaza, spherical concrete bollards help to distinguish walking routes and bike parking from driveways.

After all, in its current form, most of the building is still used for parking cars, with 510 stalls — six of which are EV charging stations — spread across its top six storeys. But a closer look reveals the many flexible design strategies that may one day allow the parkade to become something else entirely. Rather than spiralling ramps that would become obsolete during a conversion, each parking level is a continuous gentle slope with an extra-high ceiling — a strategy that will make the floors relatively easy to adapt later on. 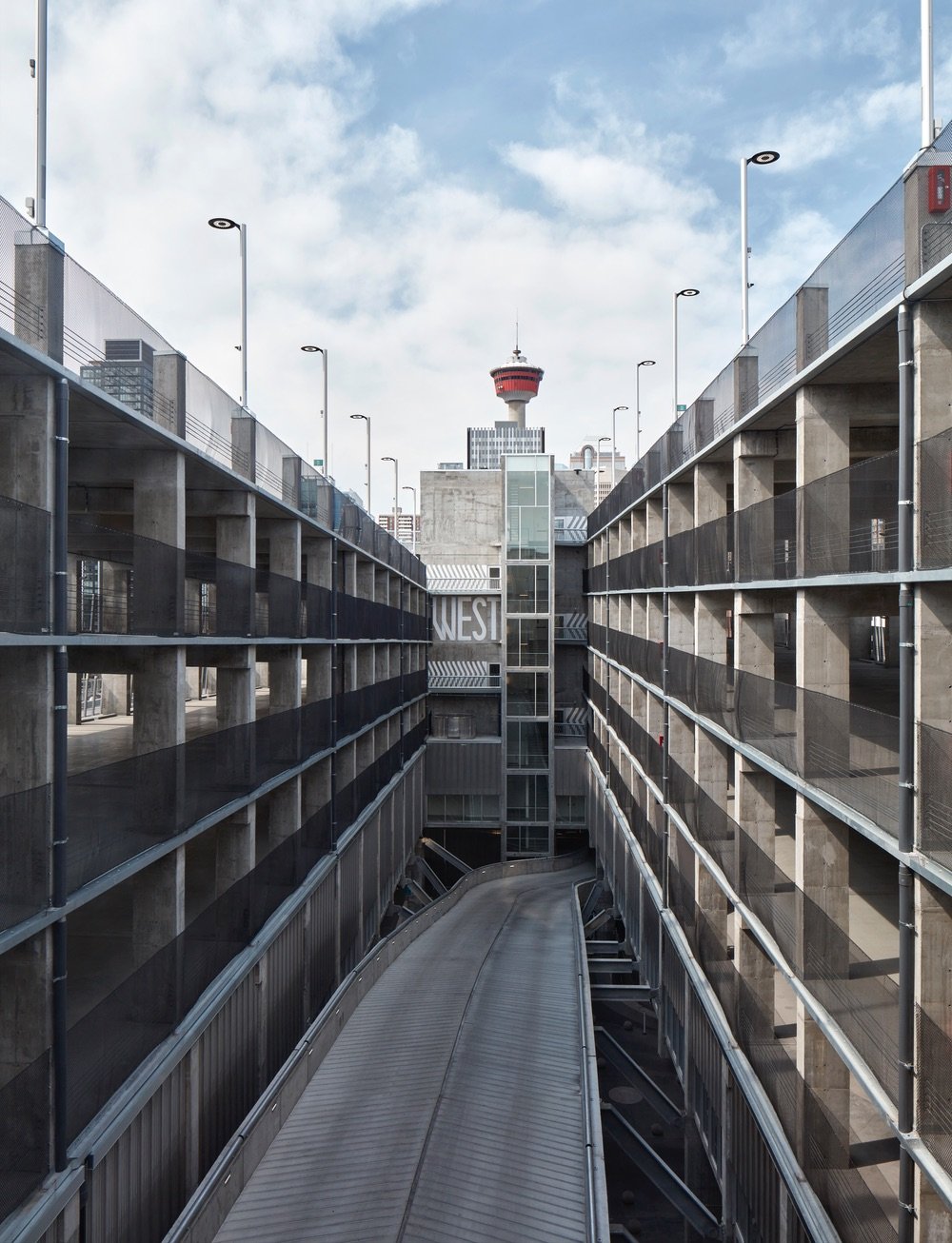 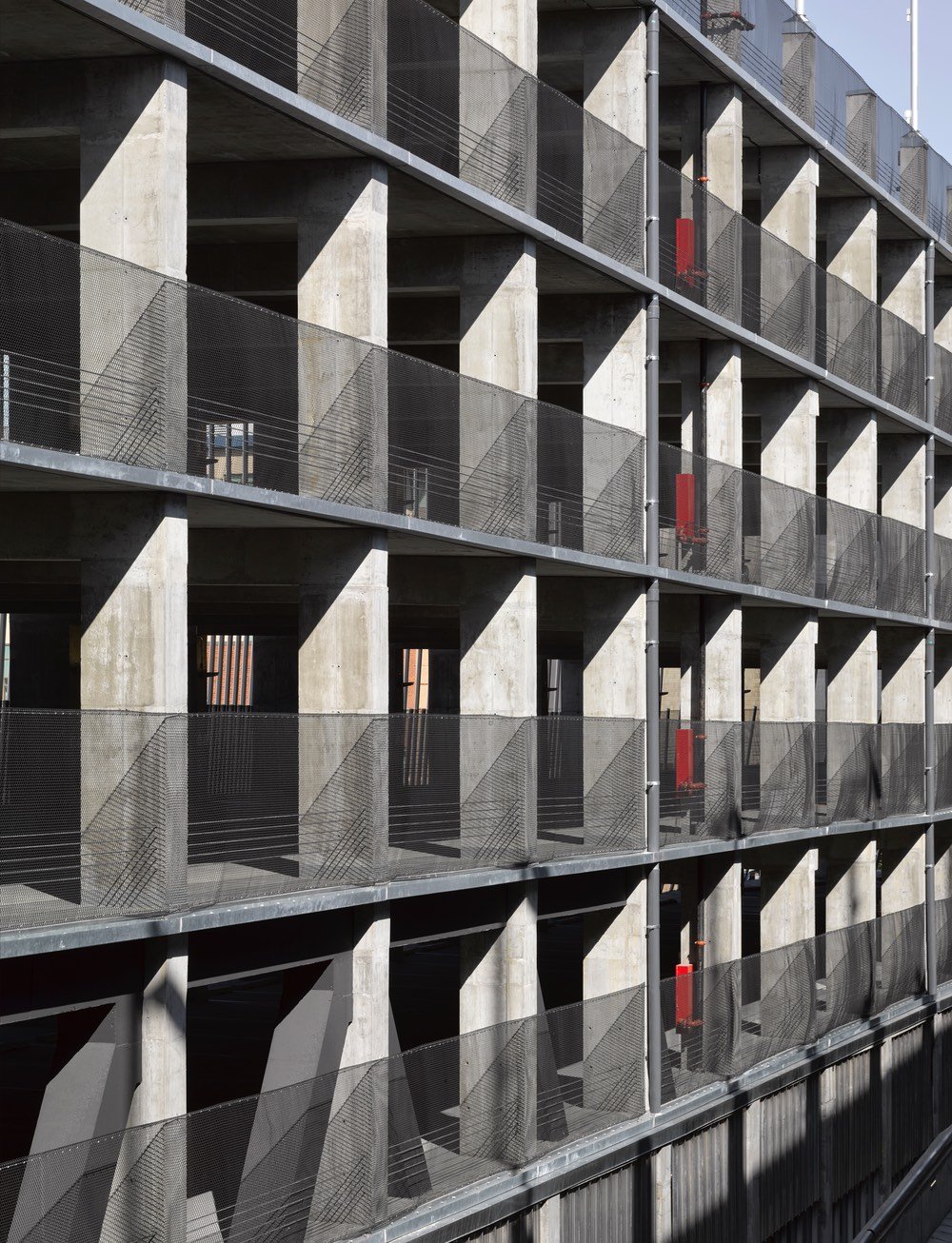 Similarly, while the structure’s central atrium may cut away at the number of parking spaces available in the short term, it also ensures that the facility provides the kind of bright, open spaces that may someday benefit residential or commercial tenants. “You always want to have access to natural light,” says Sasa Radulovic, design lead on the project at 5468796 Architecture. “So that worked hand in hand with the future-proofing.” 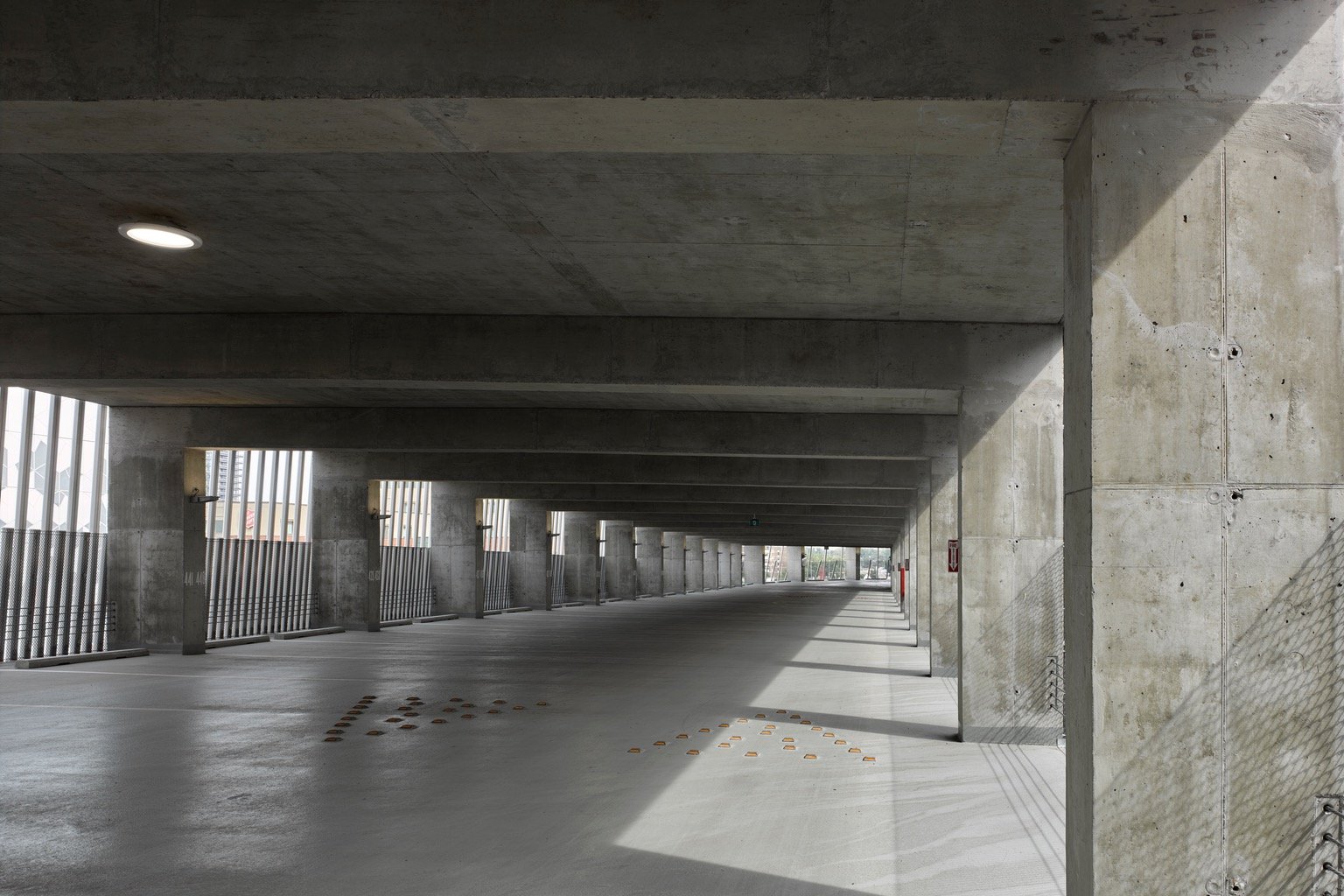 To add to the design’s flexibility, the team embraced a relatively old-school construction method. “A really important aspect of this building is the post-and-beam structure,” Radulovic explains, noting that mid-size facilities like this are usually built with a less flexible shear-wall structure. The technique used here allows for expansive views of the city and its architectural gems from each storey — especially the rooftop, which can be rented as an event venue. 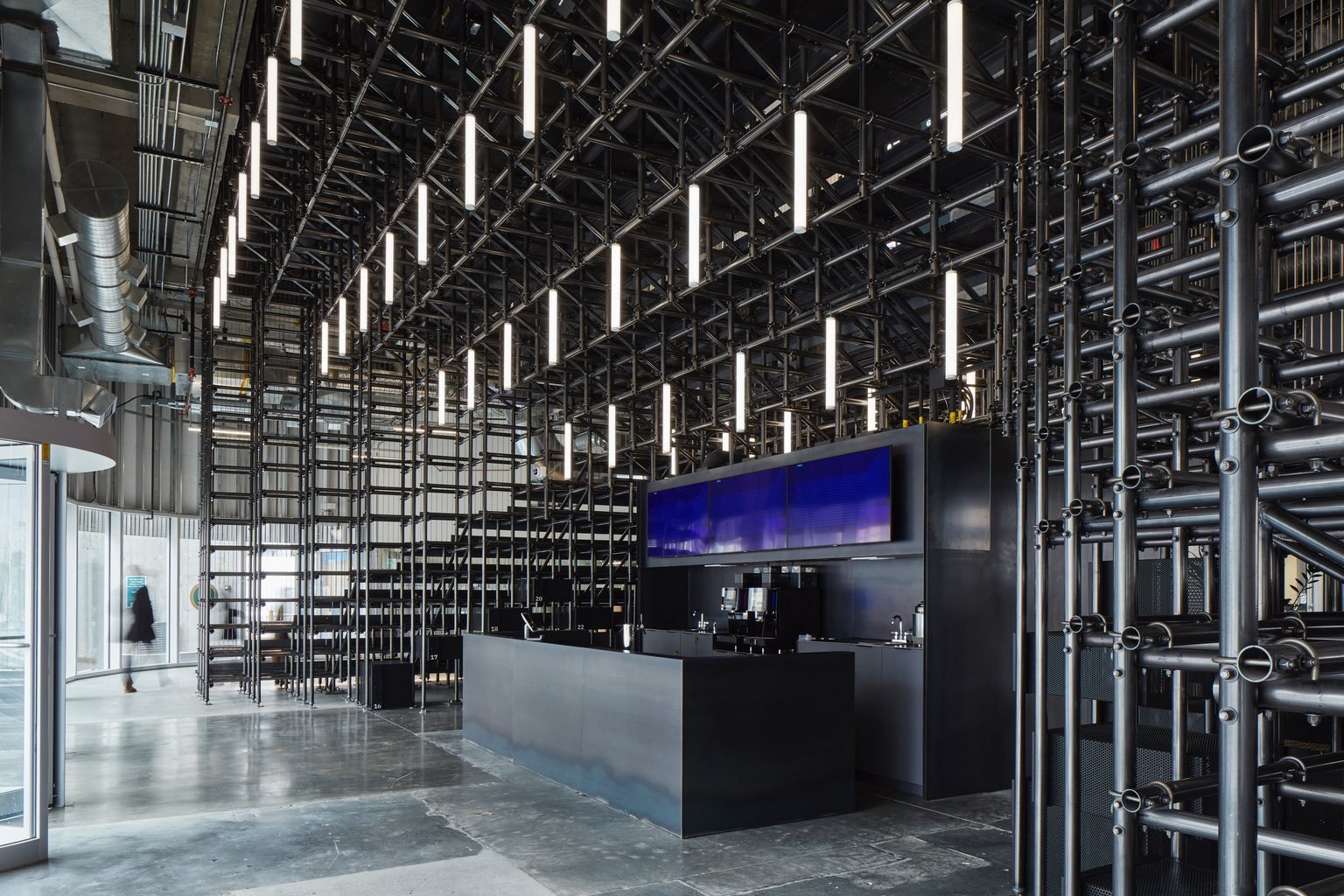 The clearest evidence of the building’s future potential is found on its first two levels, both of which are occupied by a local start-up incubator, Platform Calgary. Its innovation centre pairs a ground-floor café and pitch stage with versatile upstairs social and work spaces for teaching, prototyping and testing new technologies. 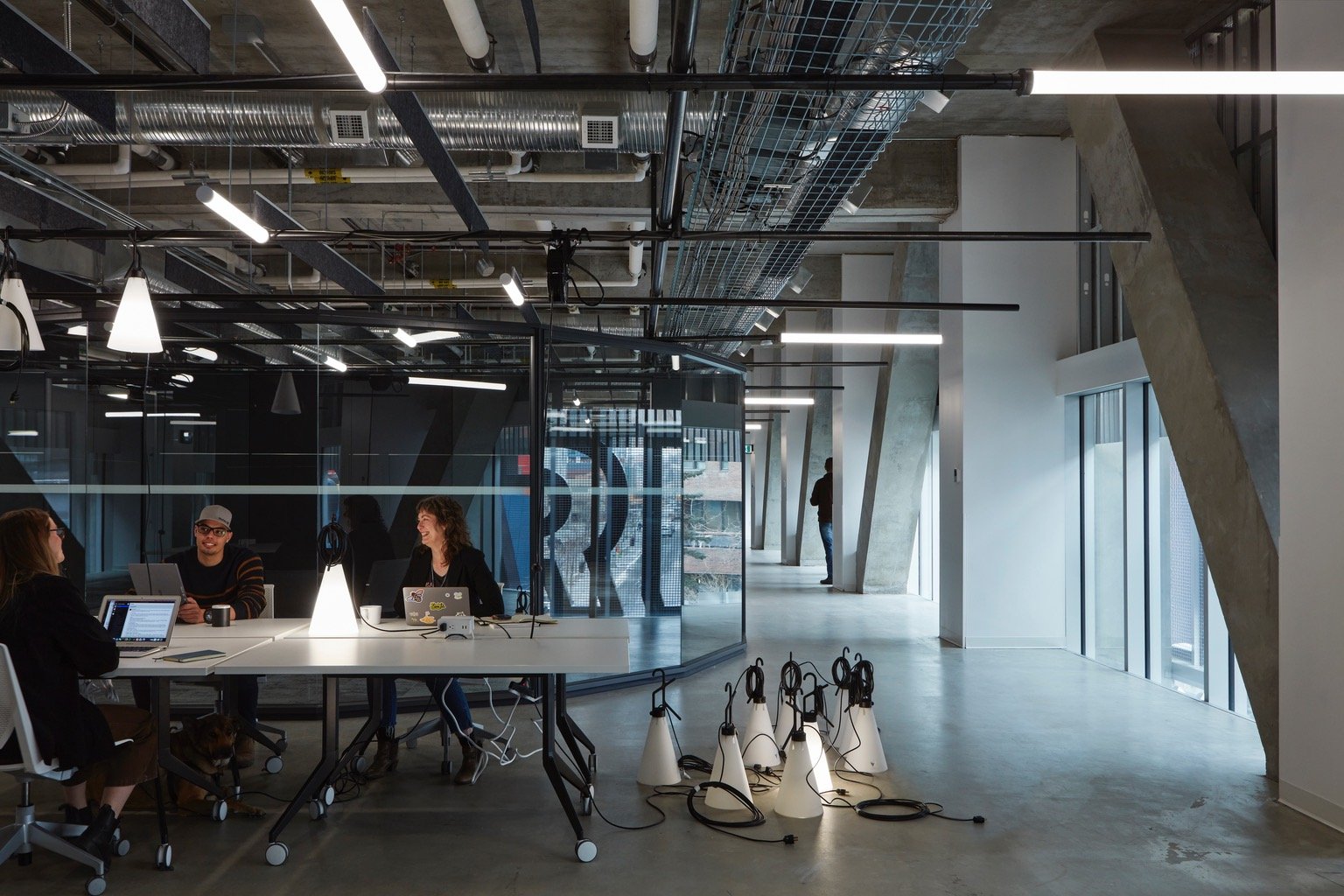 “This structure was a very good choice for them,” Robinson says, “because the building is already designed to evolve with the needs of such a future-oriented organization.” Sure enough, Platform Calgary’s space features a ceiling grid that makes it easy to reconfigure or remove temporary walls and reposition key electrical infrastructure.

Whether change comes gradually or all at once, at Calgary’s 9th Avenue Parkade & Platform Innovation Centre, the future awaits.