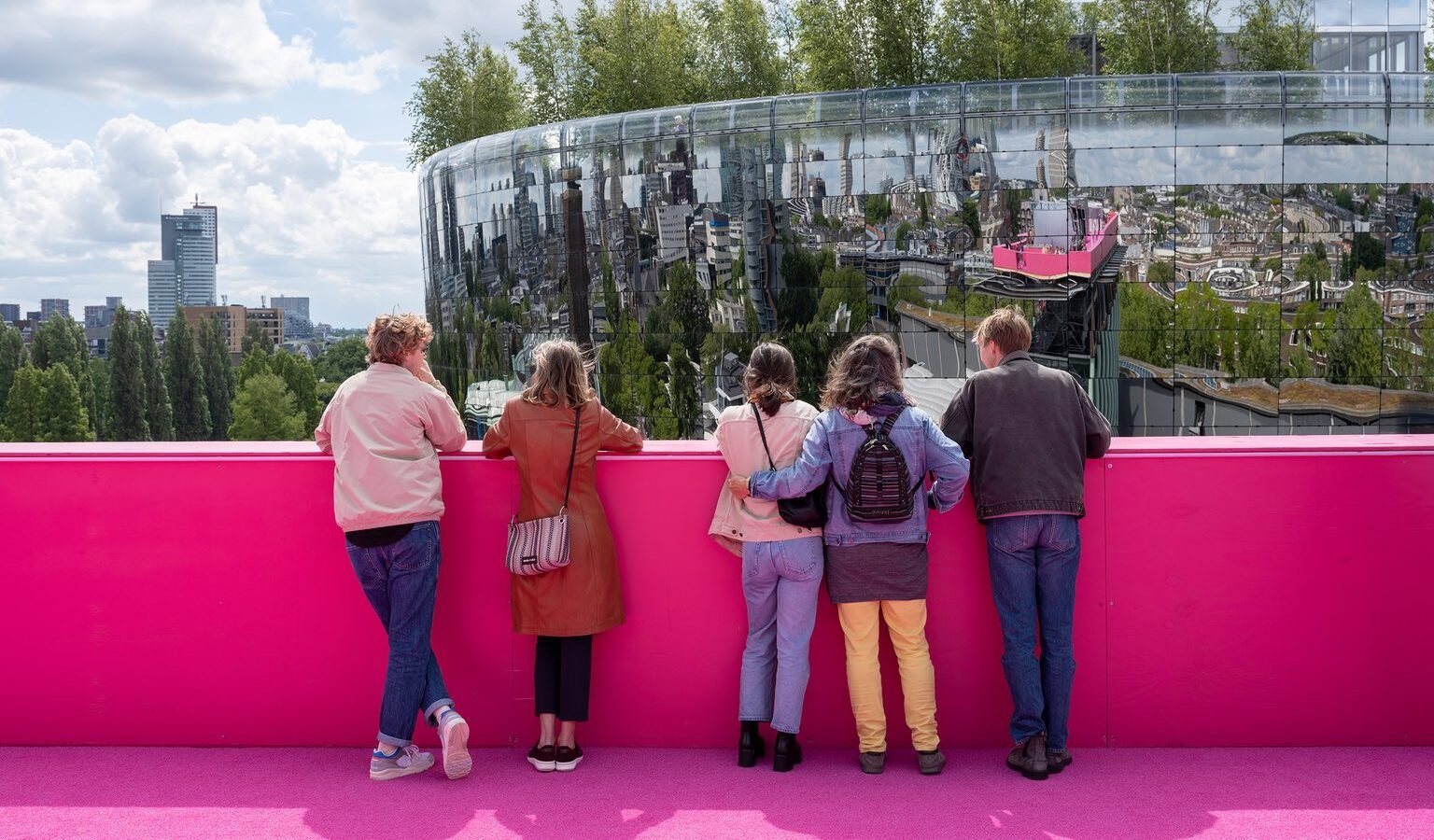 In cities around the world, inspiring public spaces are landing on top of buildings.

By introducing some greenery into the concrete jungle, city parks inspire a closer connection to the earth — which is not to say that they should be approached as purely earthbound spaces. 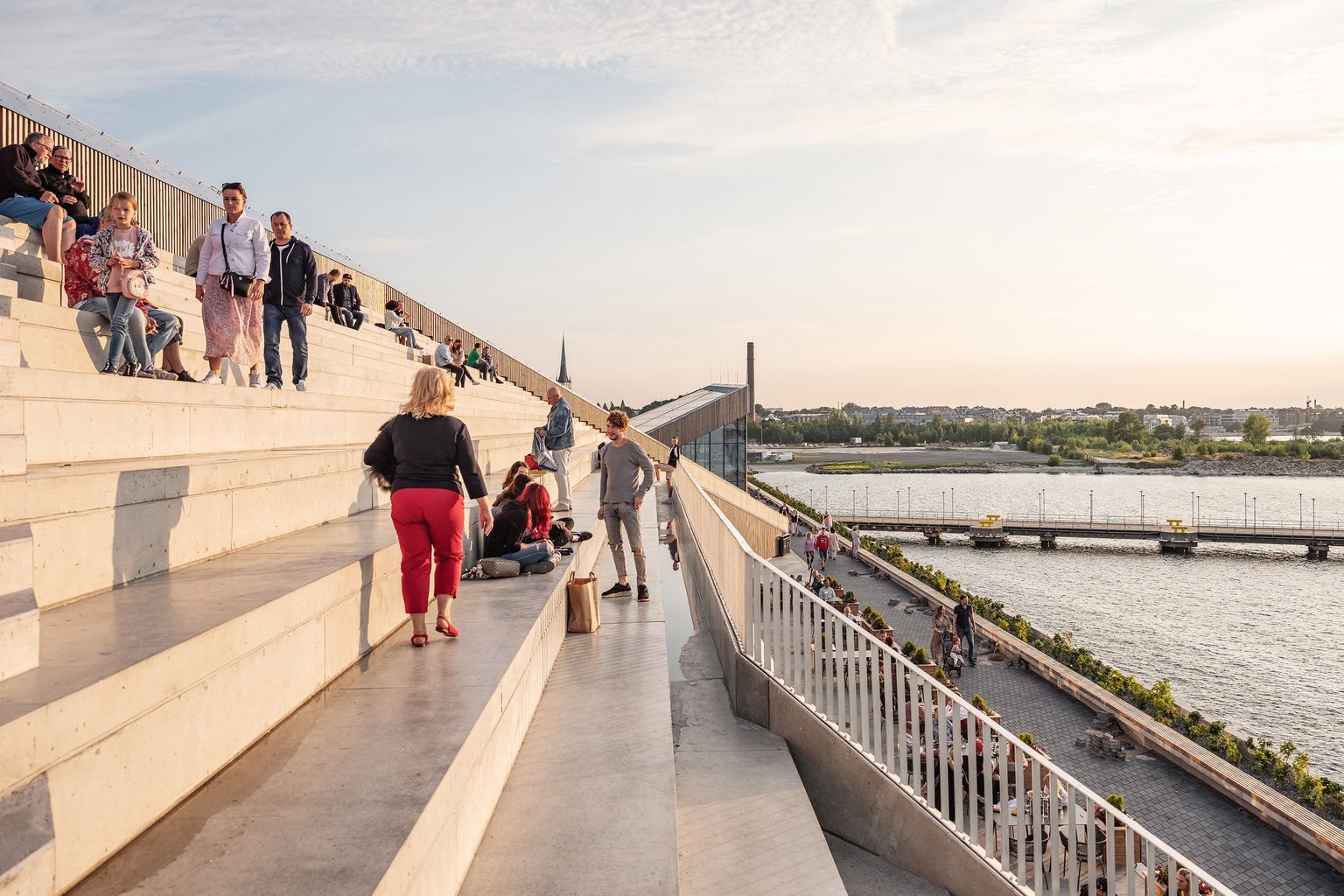 That’s the takeaway from a new generation of recreational environments that have risen up off the ground and into the clouds. Here are three key principles behind this top-down approach to rooftop park design, lifted from a few of our favourite city summits. 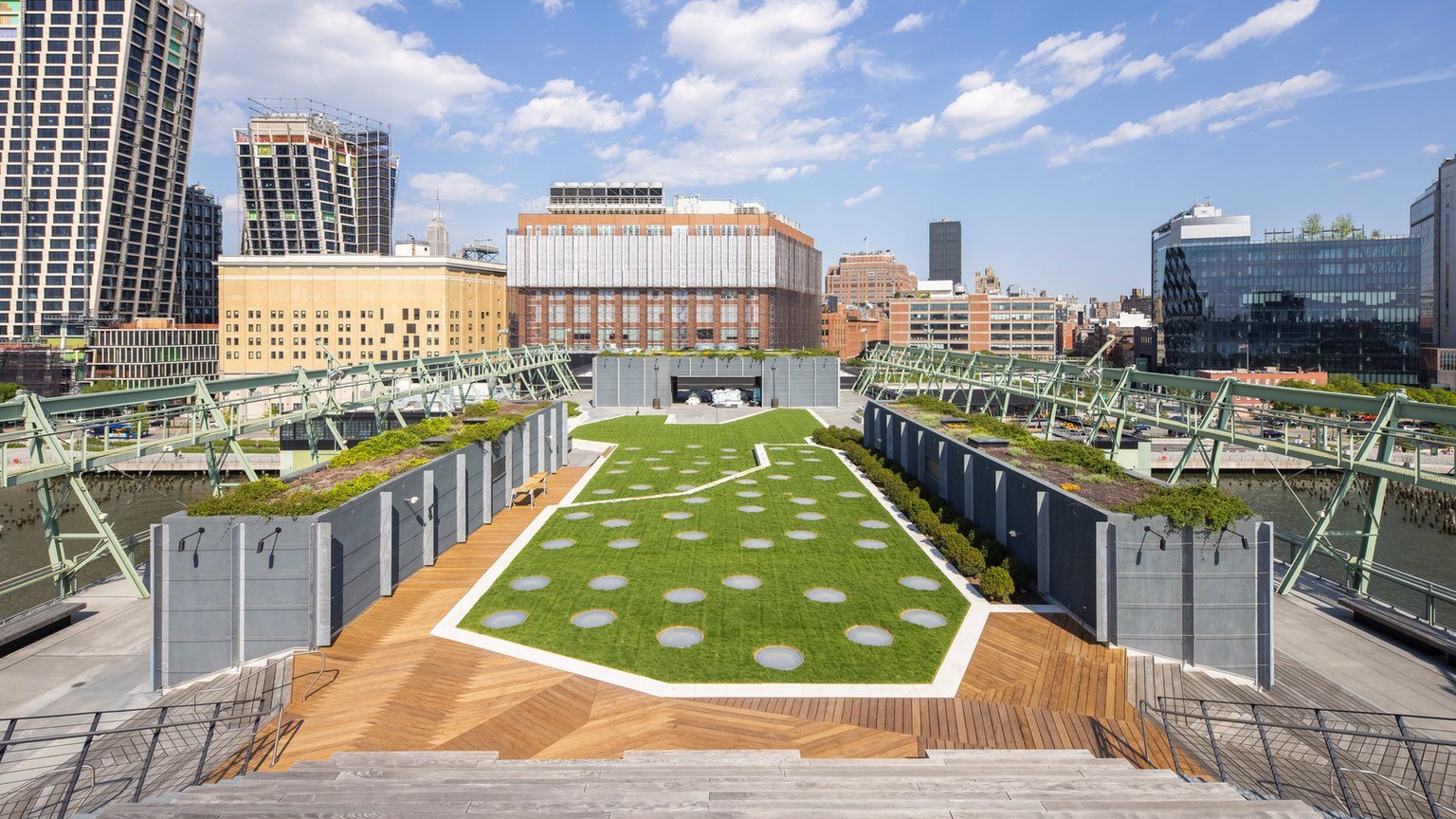 Photo by Jakob Dahlin
SCALE
As cities densify, their street levels do not always offer the room required to imagine expansive new outdoor gathering spaces. One solution: look up. 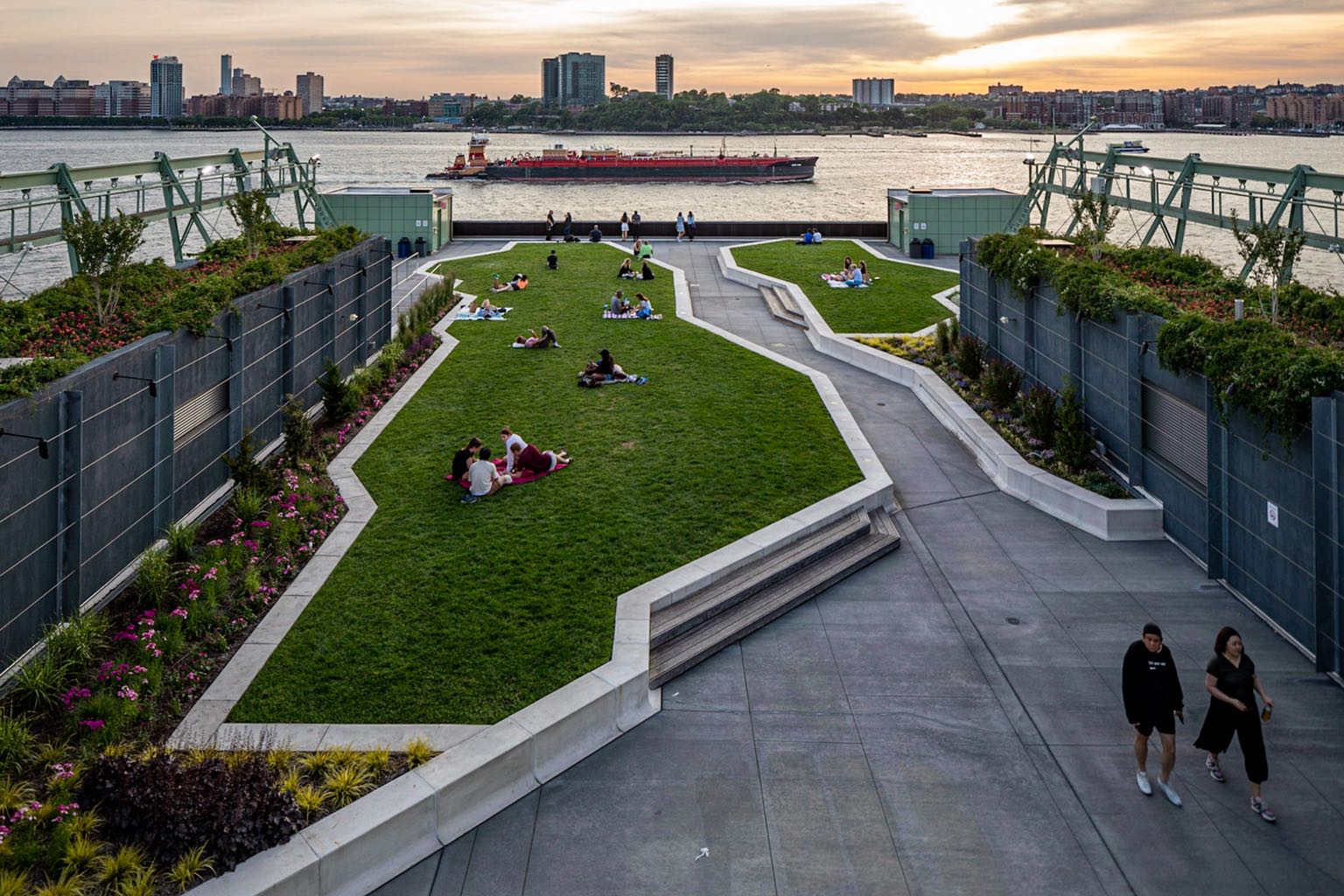 Open until 10 p.m. on most nights, the riverside park also boasts a full slate of evening programming, including Tribeca Film Festival screenings. 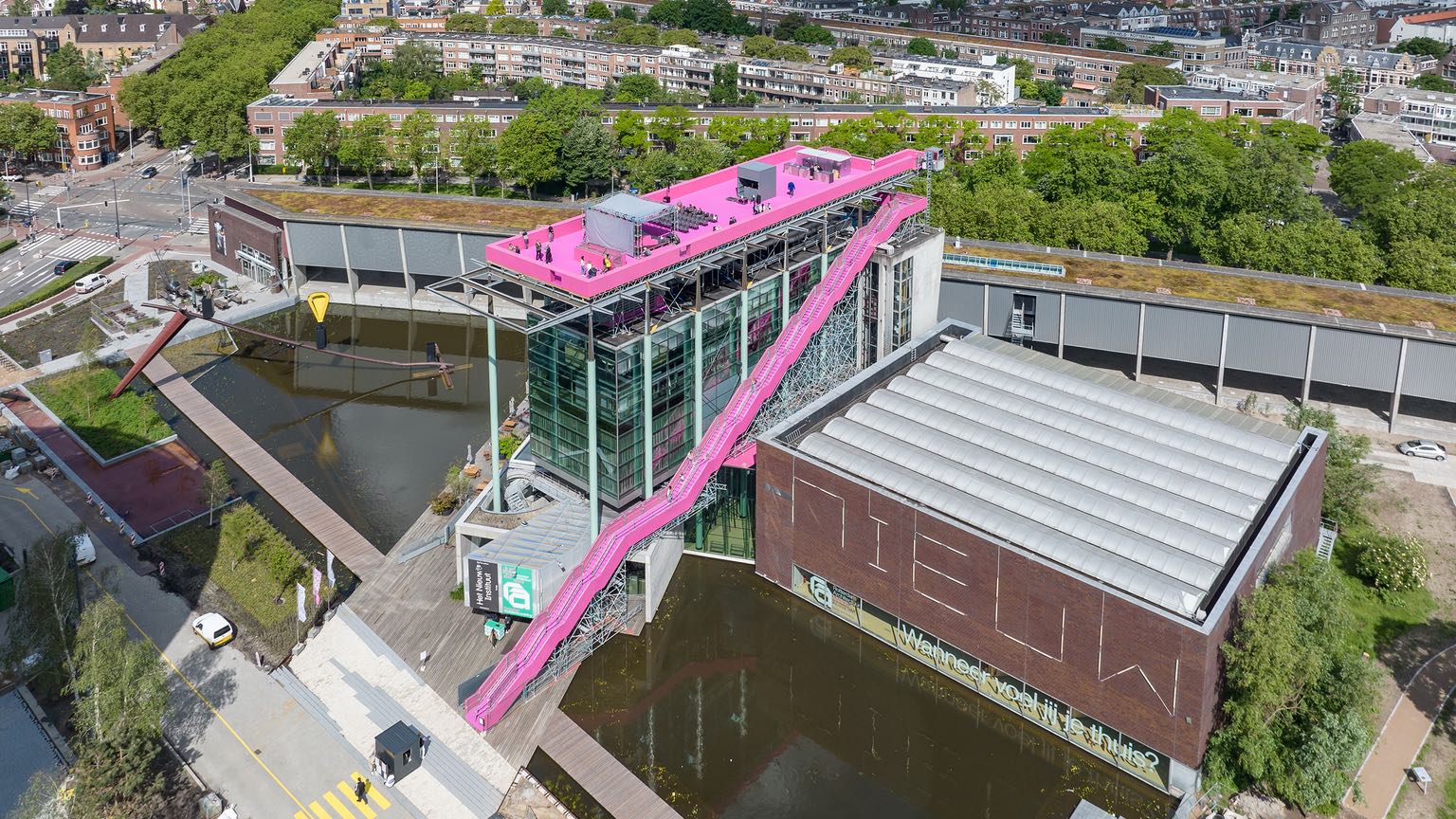 Photo by Ossip van Duivenbode
SPECTACLE
Too often, the best vantage points are reserved for tourists booking a visit to a pricey observation deck. That’s why it’s particularly refreshing when a firm strives to make lofty views commonplace.

This summer, MVRDV unveiled The Podium, a temporary fluorescent pink event space built atop the Het Nieuwe Instituut in Rotterdam and accessed via a zigzagging staircase or temporary elevator.

“With our buildings, we try to see the fifth façade as more of a recreational layer that is not just there for technical equipment. It should offer a calmer break from the busyness of the streets.”
Gijs Rikken, Associate Design Director, MVRDV 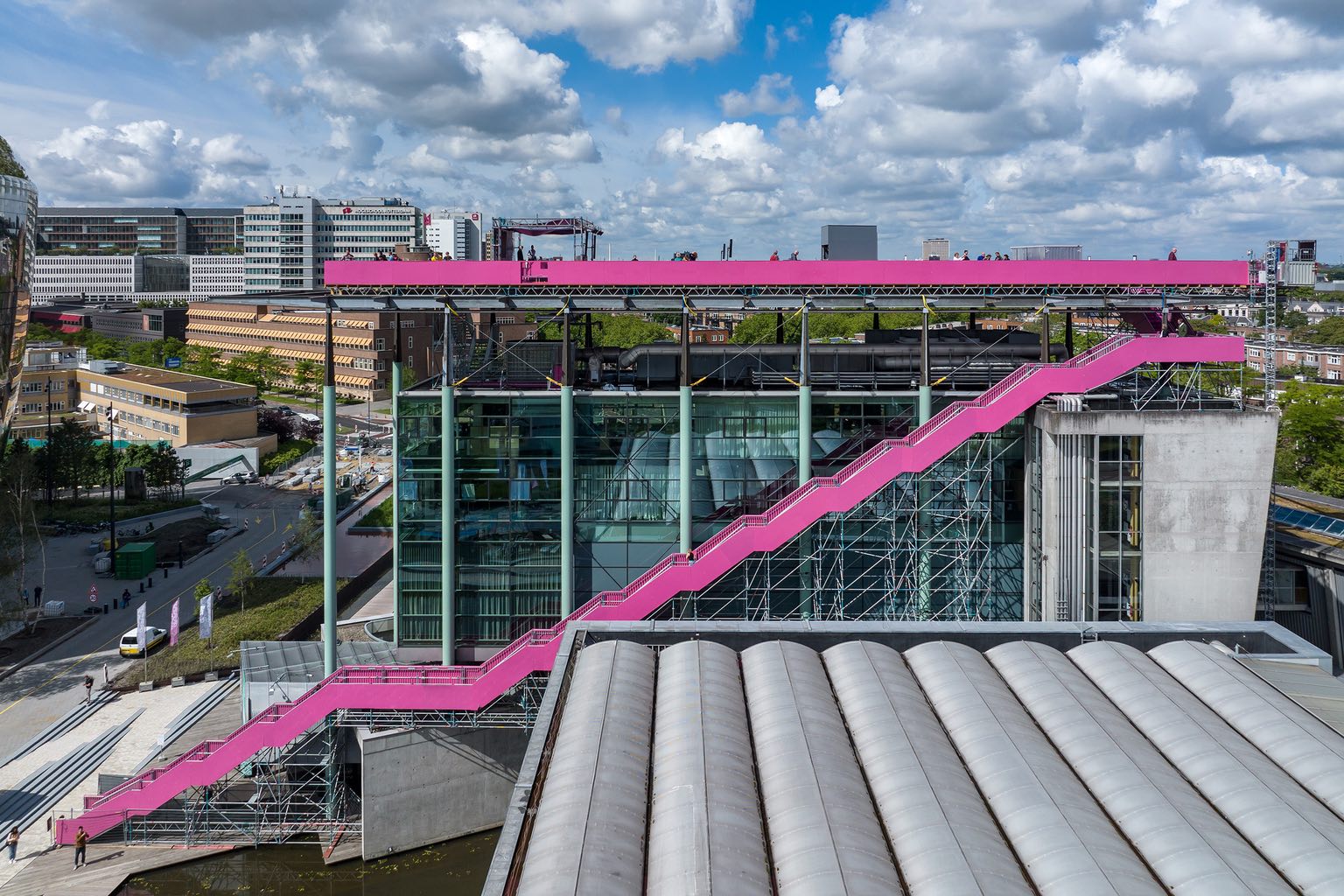 After serving as a free festival hub for the city’s Architecture Month in June, the 600-square-metre platform went on to host everything from jazz concerts to yoga classes. In the midst of this programming, visitors could purchase €3 tickets to enjoy its magnificent lookout — perfect for admiring the nearby MVRDV-designed Depot Boijmans Van Beuningen art storage facility, which incorporates its own popular sky lounge. 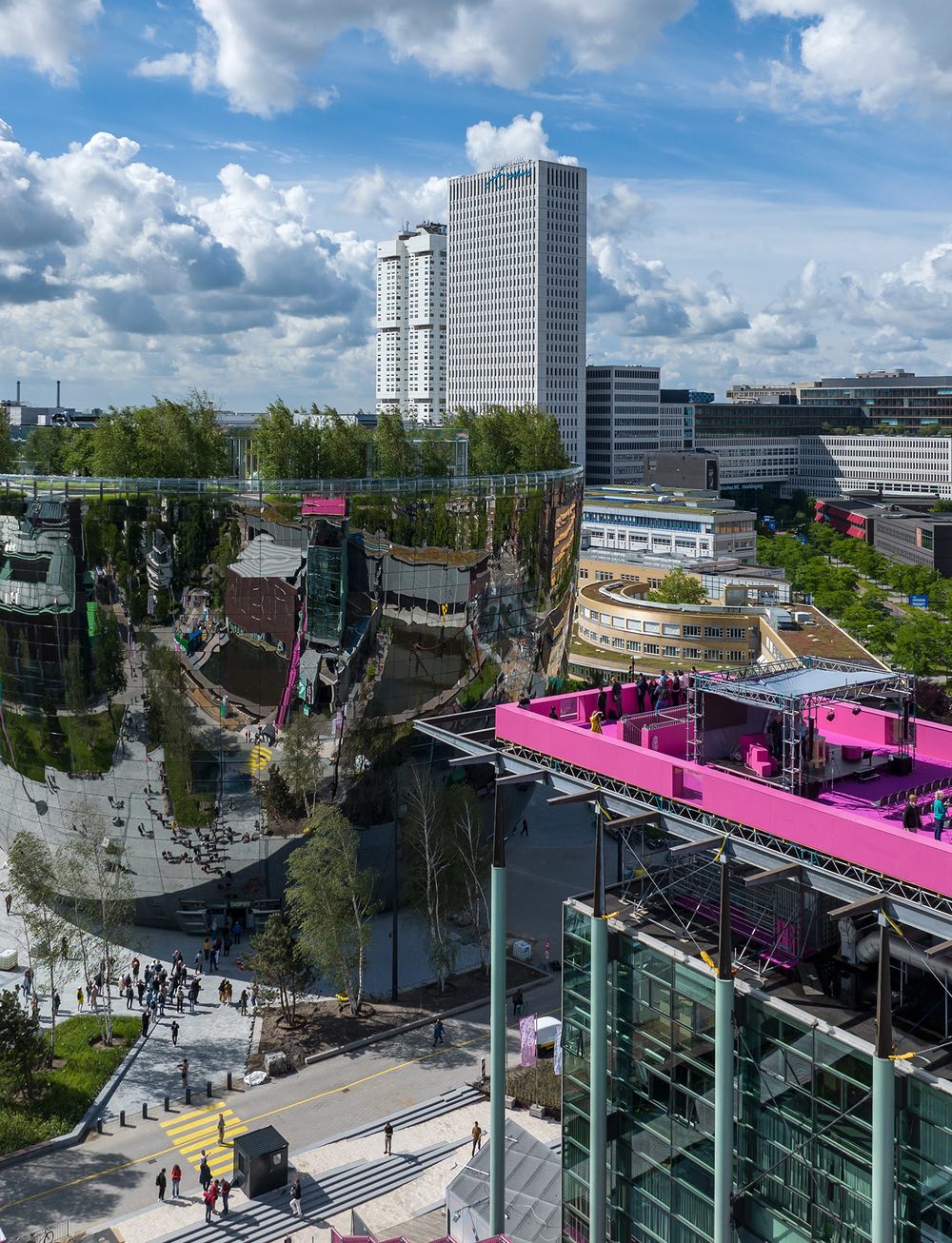 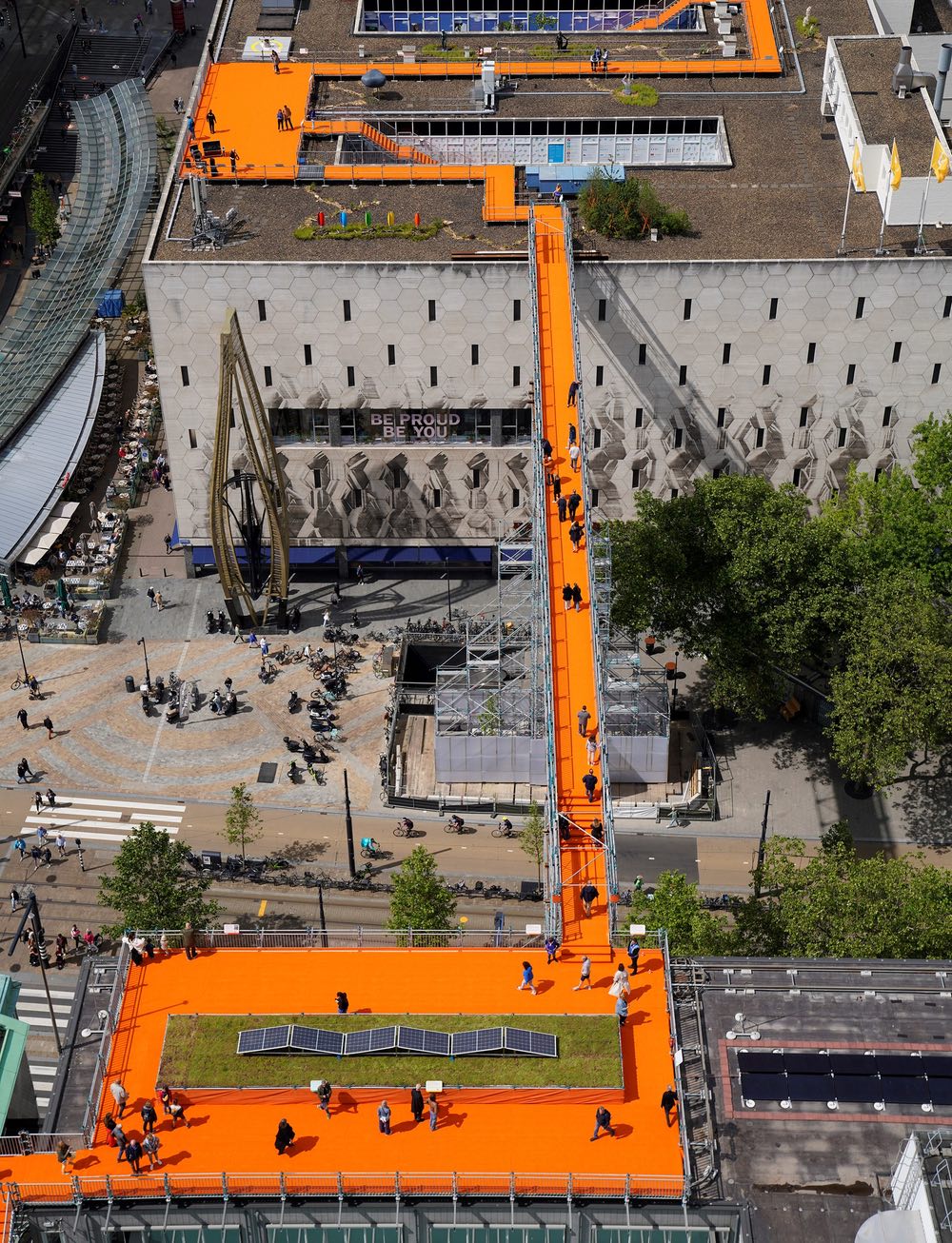 MVRDV has been a vocal advocate for more dynamic rooftop spaces, even writing a manifesto about the subject, Rooftop Catalogue. Prior to The Podium, the firm partnered with Rotterdam Rooftop Days in May to launch another temporary installation that illuminated the potential of the city’s uppermost real estate by connecting key buildings with orange aerial bridges. 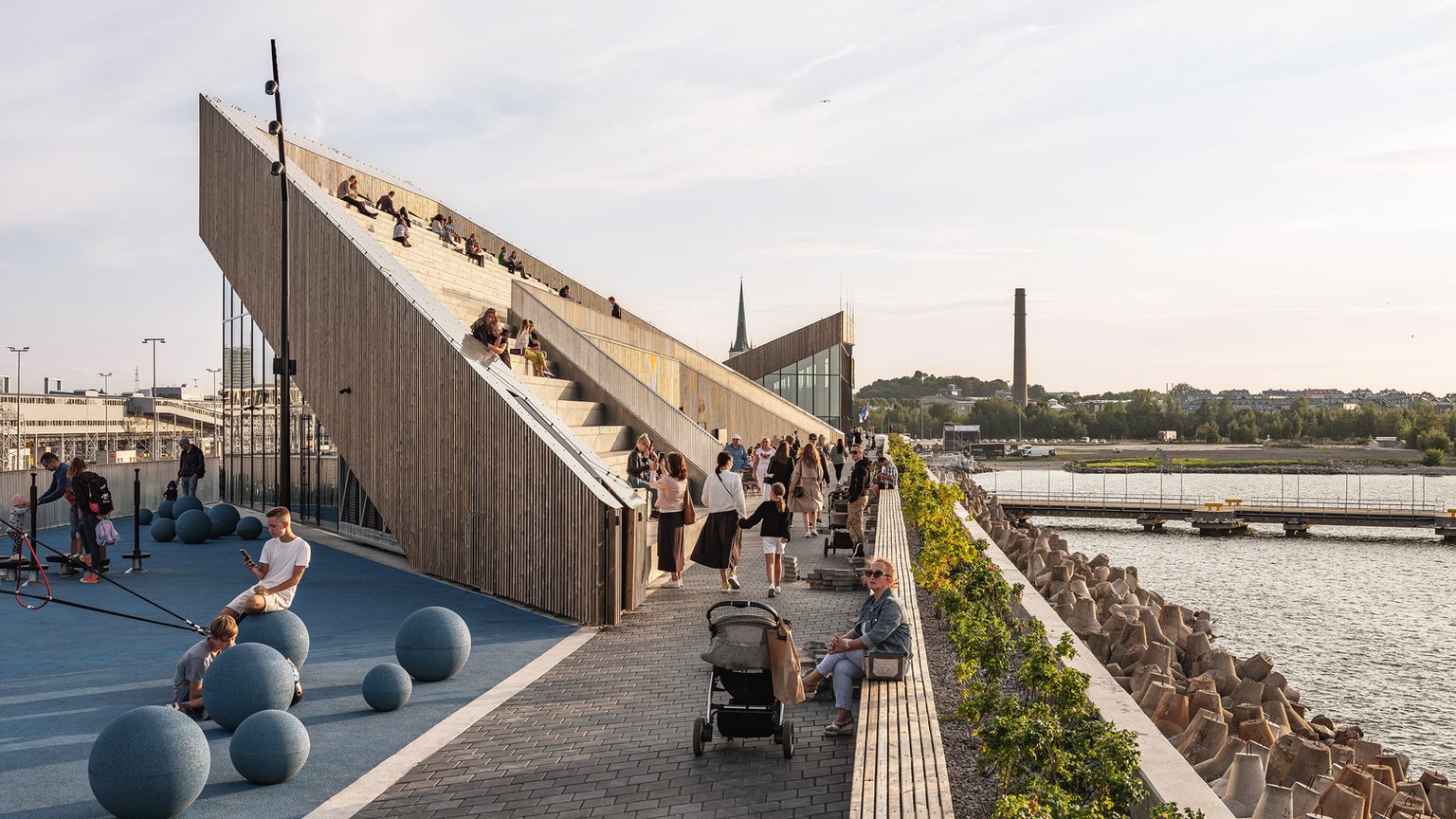 Photo by Tõnu Tunnel
SOCIAL LIFE
Rooftop patios have long been a popular destination for cocktail hour mixing and mingling. Now, public versions of these settings are out to cultivate the same sense of connection between citizens of all ages.

The best way to welcome visitors to a city is to serve up an authentic slice of life right upon arrival. Salto Architects and Stuudio Tallinn have successfully accomplished that feat in Tallinn, Estonia, by merging a tourist transportation hub with a raised park designed to draw locals down to the water all year long. 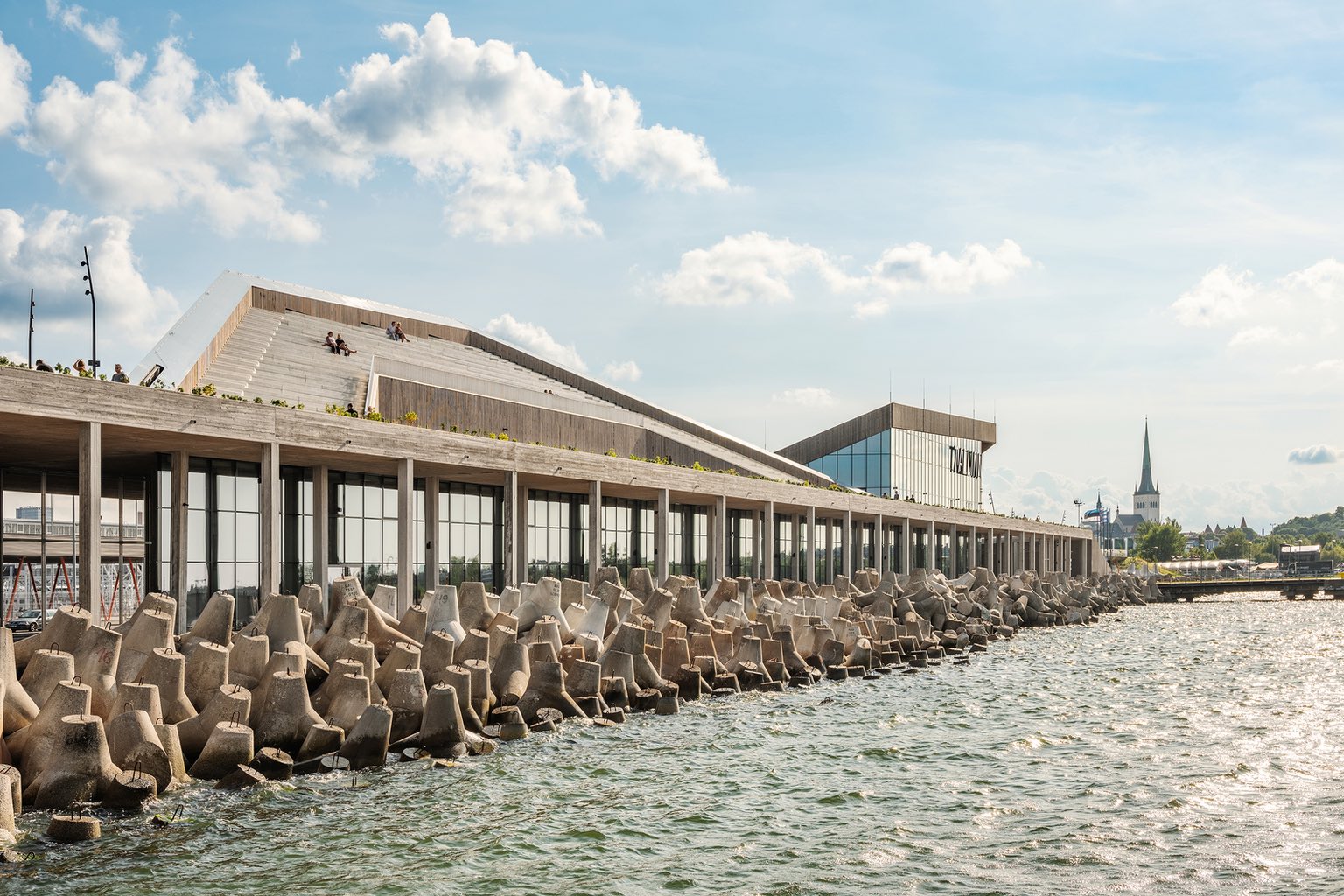 The top of the Kebony wood–clad Tallinn Cruise Terminal is a plant-lined, 850-square-metre promenade complete with an elevated playground and exercise park, as well as stepped bleacher seating that creates a perfect spot for taking in the occasional seaside concert. For chillier days, there are also seating areas with sheltered wind cover. 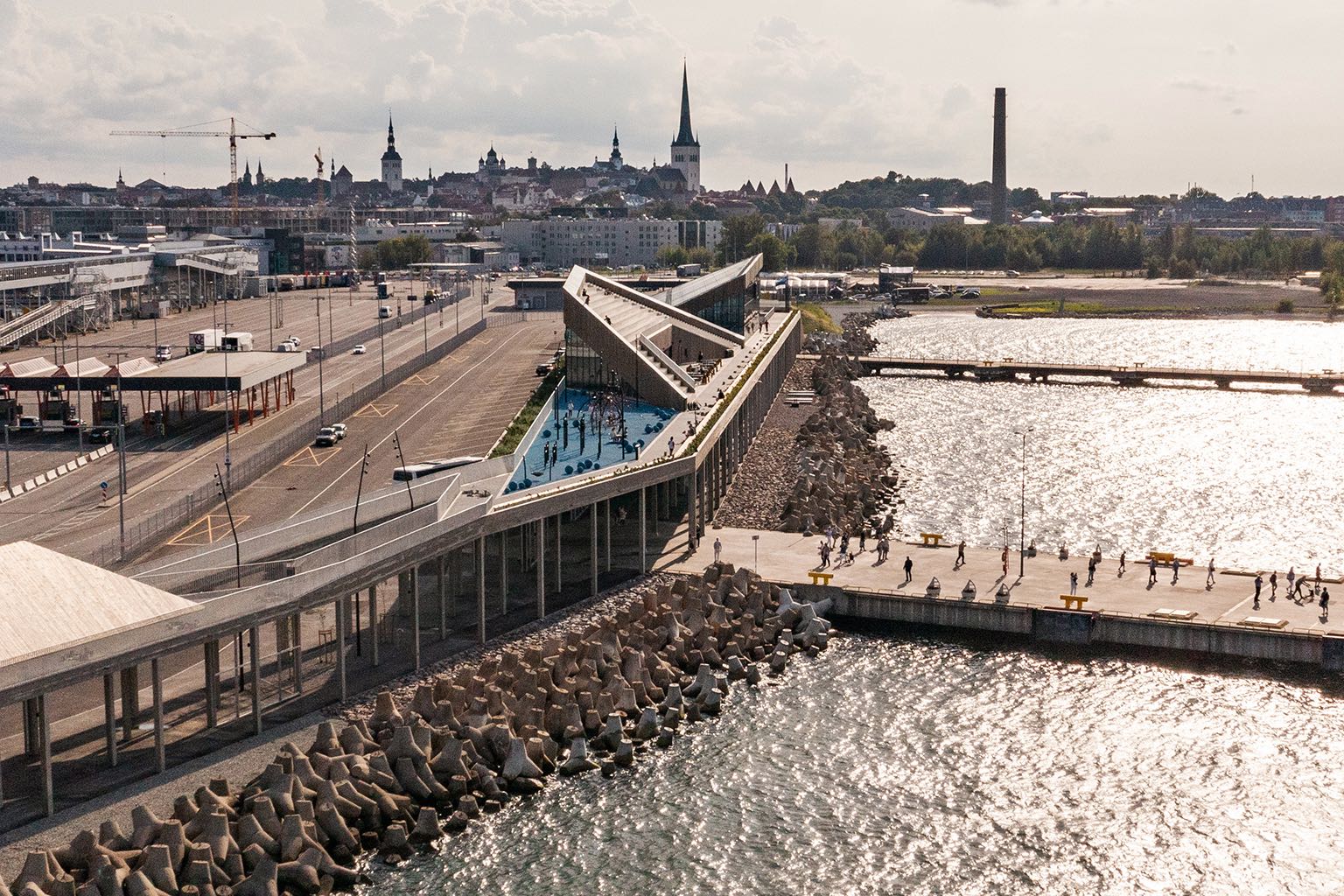 The terminal kicks off a larger harbourfront master plan developed by Zaha Hadid Architects, set to be fully implemented by 2030.

In cities around the world, inspiring public spaces are landing on top of buildings.