Canadian Canoe Museum a Lesson in Building with the Landscape
Snaking along a side of the Trent-Severn Canal in Peterborough, Ontario, the low-slung, green-roofed building by Heneghan Peng Architects, with Kearns Mancini Architects, will connect to the water. 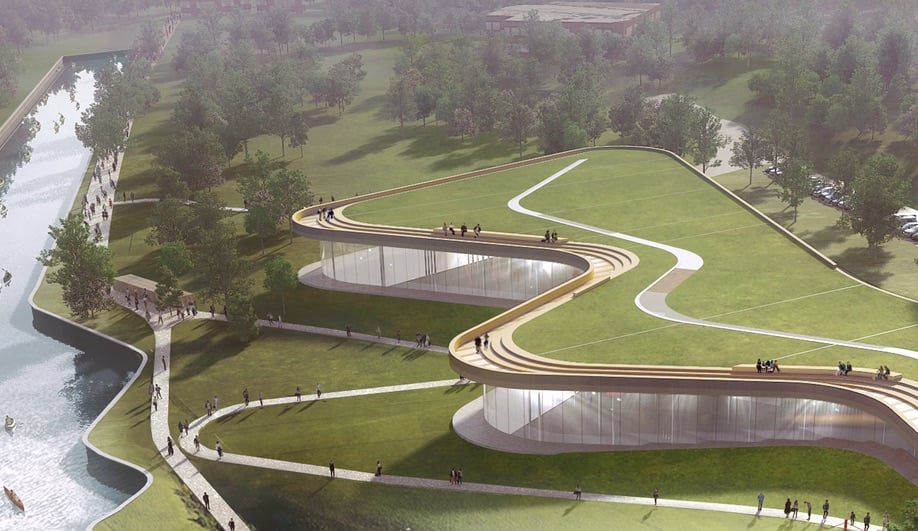 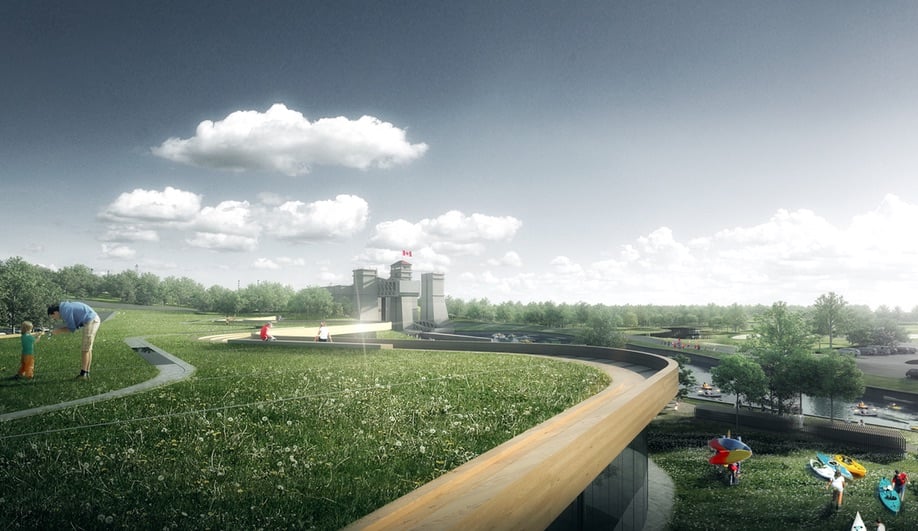 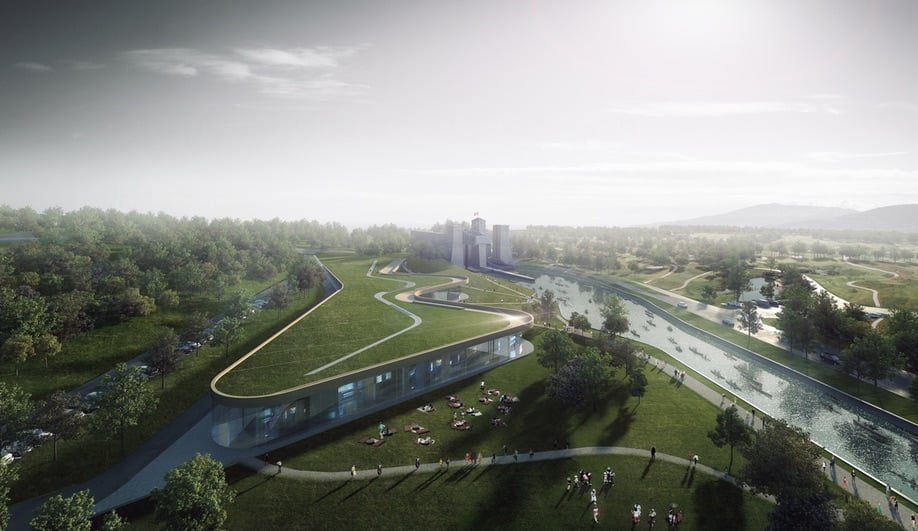 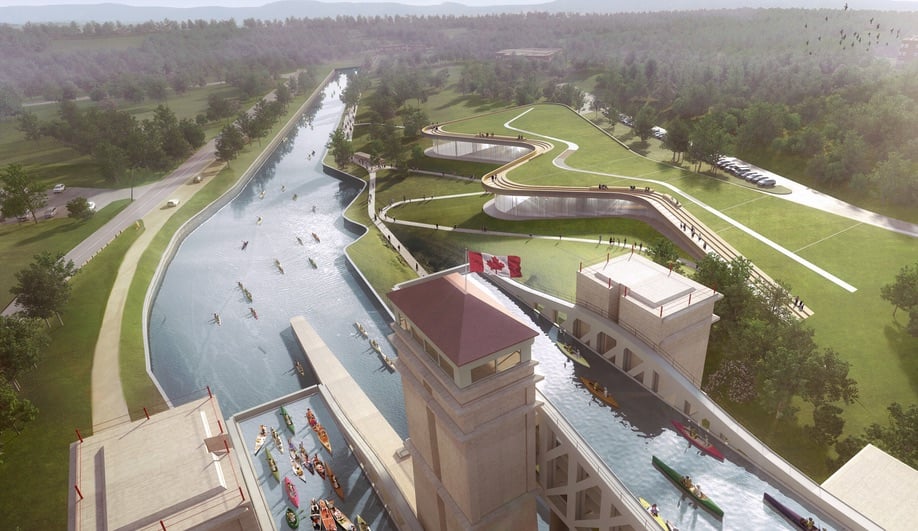 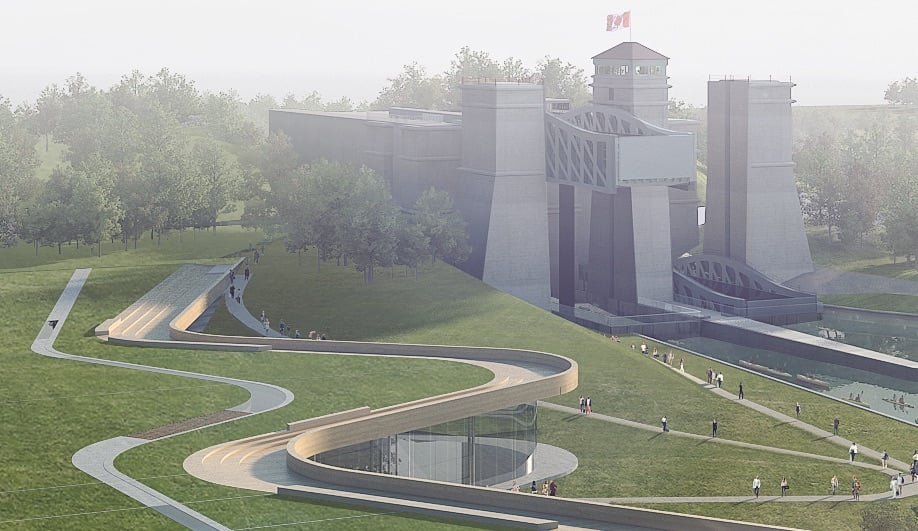 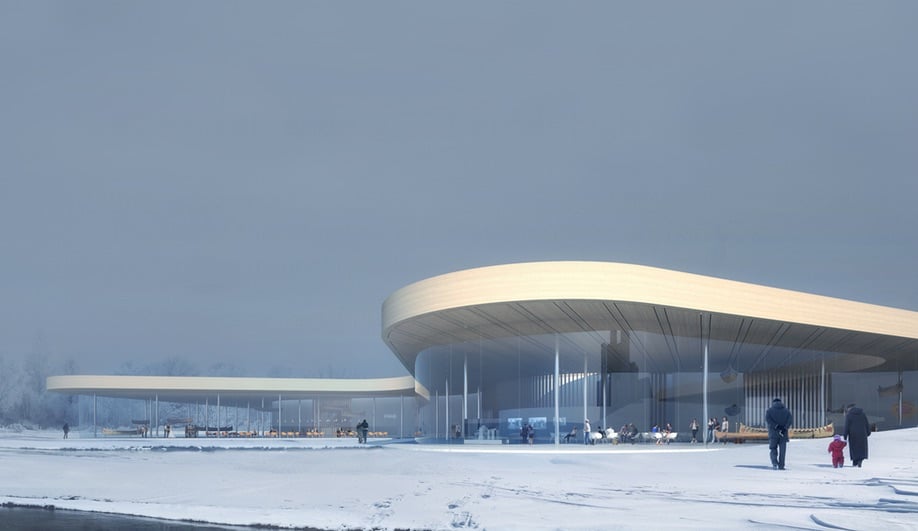 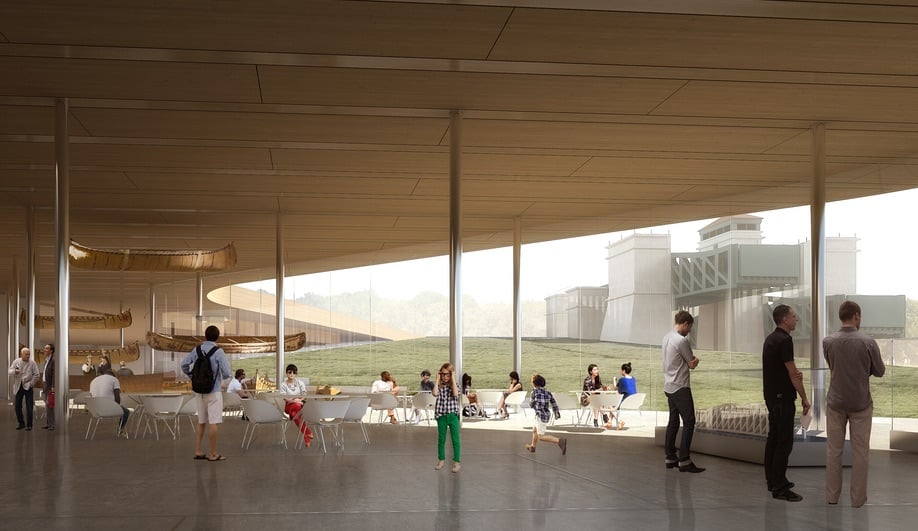 Snaking along a side of the Trent-Severn Canal in Peterborough, Ontario, the low-slung, green-roofed building by Heneghan Peng Architects, with Kearns Mancini Architects, will connect to the water.

In January, Dublin’s Heneghan Peng Architects, working with Toronto firm Kearns Mancini Architects, unveiled their plans for the future home of the Canadian Canoe Museum – a landscape-hugging building that snakes along a canal in Peterborough, Ontario. On its completion in 2020, the Canadian Canoe Museum will hold the world’s largest collection of canoes and kayaks, adding to the significance of the Peterborough Lift Lock National Historic Site. The concept, selected by a two-stage international competition, will replace the current museum’s home in a warehouse-like structure on a nondescript service plaza.

The project plays to both firms’ strengths. HPA is no stranger to building with tourists in mind; it’s perhaps best known for the Grand Egyptian Museum under construction in Cairo, next to the Pyramids of Giza – one of the most visited tourist attractions on earth. KMA, for its part, is co-architect (with Patkau Architects) of Toronto’s Fort York Visitor Centre, a project that bears some resemblance to the CCM in both typology and historical context. “Because the numbers are smaller than in tourist-heavy locations [like Cairo],” Roisin Heneghan told Azure, “the Canadian Canoe Museum will be very connected with its visitors.”

That connection is achieved through a winding, one-storey building of 7,500 square metres, snaking along the side of the Trent-Severn canal. A green roof nearly a hectare in size will overlook not just the canal – a popular spot for recreation – but also this historic lift locks that connect Lake Ontario to a network of smaller lakes, once crucial shipping routes serving Central Ontario.

Because the building will be partially underground, the zigzagging canal-side glass is the building’s primary facade, allowing it to keep a low profile. Along the green roof’s edge, a band of locally sourced hardwood sets off south- and east-facing windows, which dominate the rest of the facade. “The Lift Lock is a very dominant element,” says Heneghan of the location, “and it’s a long, narrow site with a significant slope – we wanted to take advantage of that water frontage.”

Setting the building partially underground has the added benefit of improved sustainability through thermal massing and reduced energy costs – crucial for artifacts that need to be maintained at a consistently cool temperature. Limiting windows to one side of the building also creates exhibit spaces that can be kept dark, ideal for the museum’s collection of aboriginal artifacts and birch-bark canoes, some of which date as far back at the 1780s, and can degrade in sunlight.

The green roof also does triple duty; besides thermal massing, it contributes to the management of stormwater runoff, and houses recreational spaces with prime views overlooking the historic locks. As Lisa Rochon – Chair of the Canadian Canoe Museum Selection Committee – says, “No matter where you are inside the museum or outside standing on its roof, you will always be able to see the water, and a canoe waiting to be paddled.”