Haute Hospitality
In Montpellier, France, a state-of-the-art school by Massimiliano and Doriana Fuksas takes the culinary and hotel arts to another level. 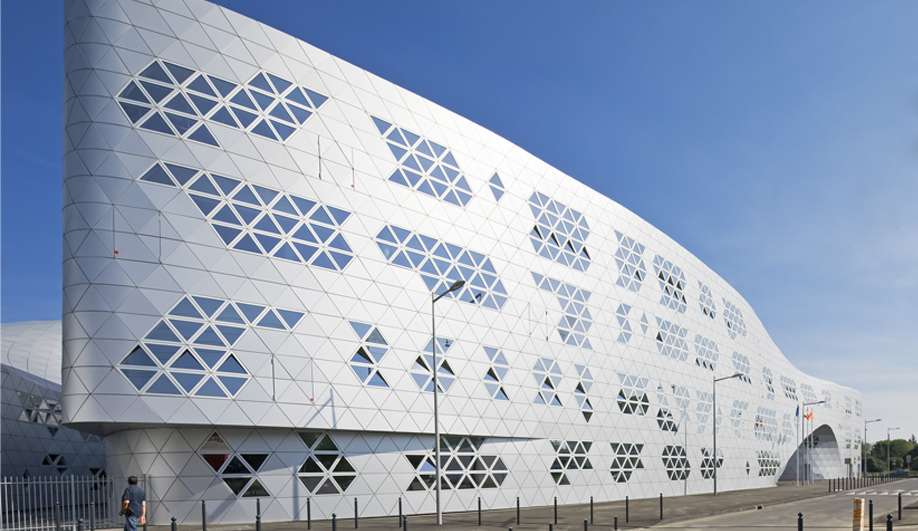 The school’s shotcrete shell is clad in Alucobond panels and windowpanes in thousands of size and contour variations. 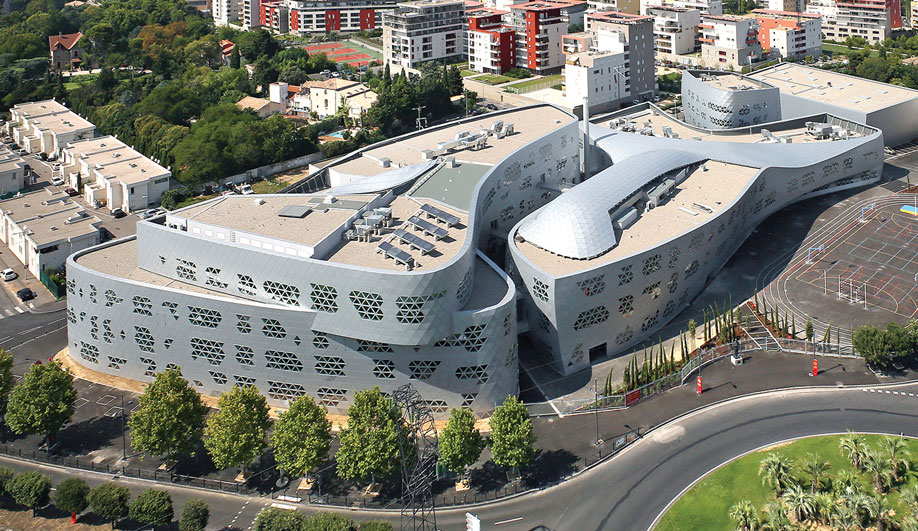 Occupying most of the complex’s 1.7 hectares, the two main buildings weave around each other, connected by bridges and topped with solar panels.rn 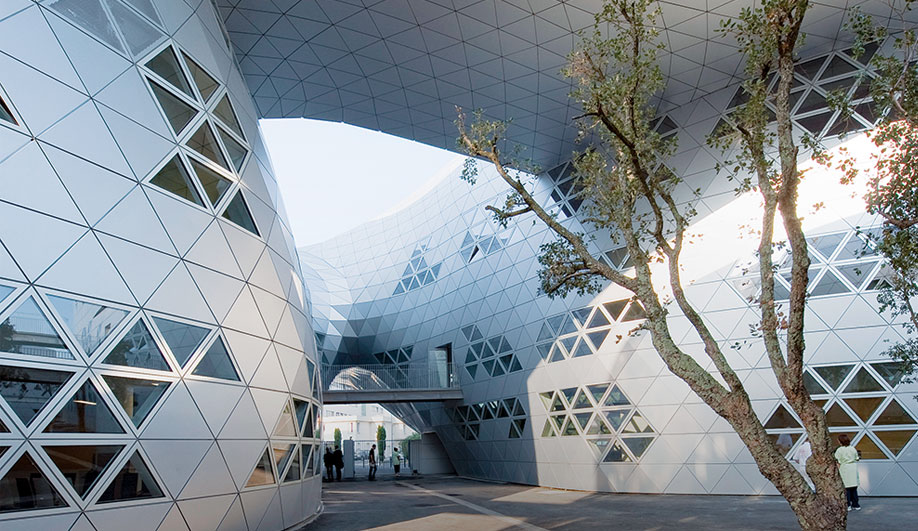 A detail view of the connective tissue between the two main blocks. rn 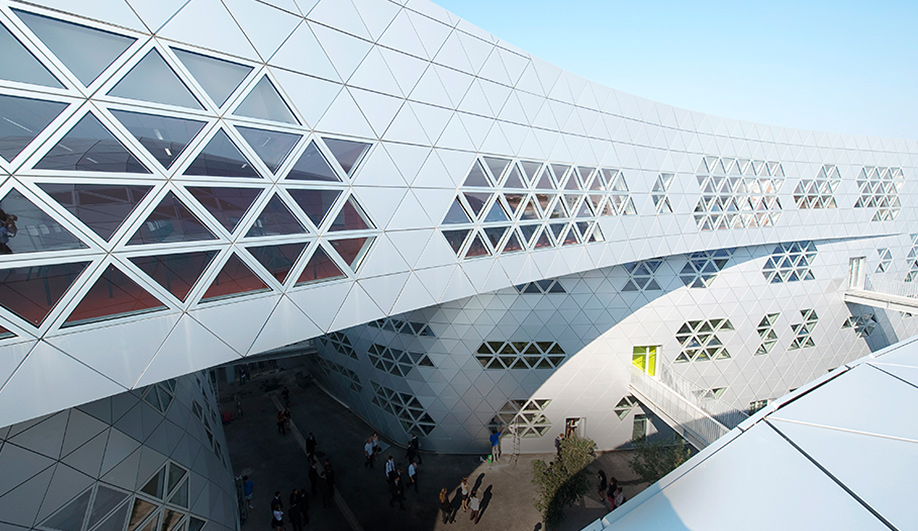 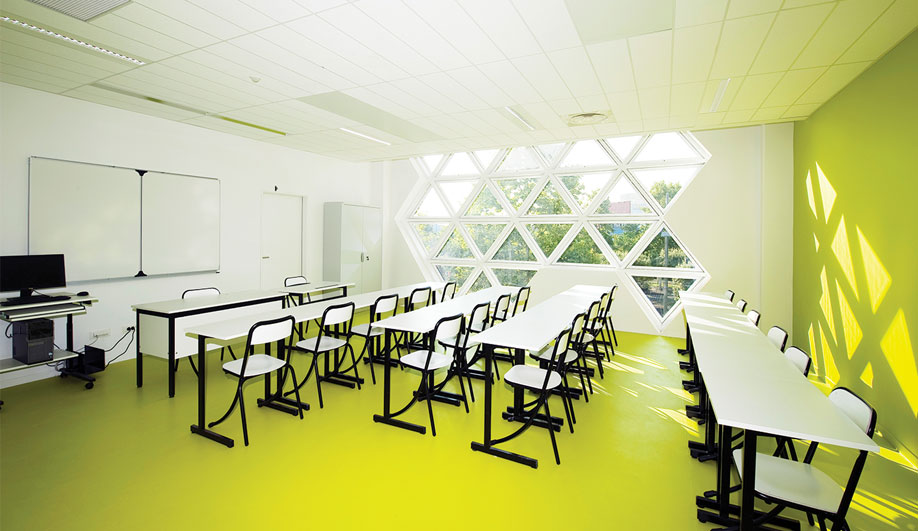 Triangular win­dows bring natural light into the minimal interiors and makes dynamic patterns on the walls.

As the visionary, and unrepentantly controversial, mayor of Montpellier, France, from 1977 to 2004, and then as president of the Languedoc-Roussillon region, the late Georges Frêche transformed his city, helping to boost it from the 25th-largest to the eighth-largest in the country. Like President François Mitterrand, he commissioned grands projets, and the latest of these, a major hotel school, is named for him. Massimiliano and Doriana Fuksas won the 2006 competition to design the Lycée Hotelier Georges Frêche, a complex of sinuous concrete structures that fill the 1.7‑hectare site. Of the two main blocks, a three-storey Y‑plan building contains a small hotel, a gastronomic restaurant, and a brasserie where advanced students can hone their skills with paying customers. Bridges link this building to a four-storey structure, entered via an arch at the rear, which houses classrooms, offices, an exhibition space and a canteen. Linear courtyards separate these blocks, as well as three satellites containing a gym, student rooms and staff apartments.

Despite its complexity, the finished project conforms exactly to the physical and parametric models. “We always realize our original concepts without any subsequent changes, even though the contractor may have difficulty in mastering all the details,” says Massimiliano Fuksas. The entire ensemble is wrapped in a taut, geometrically patterned skin, a hallmark of recent Fuksas buildings, from the Milan fairgrounds to the new terminal in progress for the international airport in Shenzhen, China. The firm specified triangular panels in 17,000 size and contour variations, made of Alucobond, aluminum thermo-bonded to a polyethylene core. These were stamped with bar codes and assembled like a jigsaw puzzle on the shotcrete shell, along with flush-fitting triangular windows of high-performance glass. As Fuksas observes, “This provided a uniform finish that is easy to clean and changes colour with the light, while ensuring good thermal and acoustic insulation.”

A thousand students attend the school, but even with the heavy demands of kitchen equipment Fuksas managed to achieve a high level of sustainability, reducing the carbon footprint through orientation and rooftop photovoltaic panels. And the firm stayed on budget, despite the complex design and custom fabrication.