When it comes to exhibitions, interior design can feel overlooked, at least when compared to architecture and product design – chalk it up to the difficulty of temporarily installing multiple entire rooms. But the Triennale di Milano did just that: visitors can wander through Rooms – Novel Living Concepts, a series of 11 spaces created for Milan Design Week and up until September 12, that embody classical theories of space-making in a thoroughly contemporary way.

The spaces on view in Rooms demonstrate the scope of experimentation in contemporary interior design. Many of the furnishings and other elements were first developed for private clients before going into production, and so lean towards idiosyncrasy – but in all cases, the interiors represent an effort to understand rooms as the primary vehicle for living, now and in the future.

Round and Round, by Manolo de Giorgi
A grid of rooms, tiled like the squares of a checkerboard, sounded unappealing to Manolo de Giorgi. As an alternative, he imagined a series of spiraling corridors would be more conducive to motion. The “continuous, fluid” interior re-establishes sightlines by opening up vertical doorways between spaces that serve the operations of daily life, rather than contain them. From solid walls to tinted mirrored windows, colours from across the spectrum give Round and Round a rich vibrancy.

D1, by Francesco Librizzi
Imagine: tens of thousands of years ago, nomadic tribes reach the Mediterranean basin and, fascinated by the quality of a particular place, decide to call it home. D1 is an interpretation of that first mythical room in the tradition of Beirut’s private interior spaces, devoted to a communal way of living: rows of narrow, coloured metal columns limn an ellipse with an empty central zone surrounded by satellite areas. With only a few simple gestures, the boundaries between inside and outside are subtly mediated, carving out a space that feels inherently domestic from the surrounding wilderness. 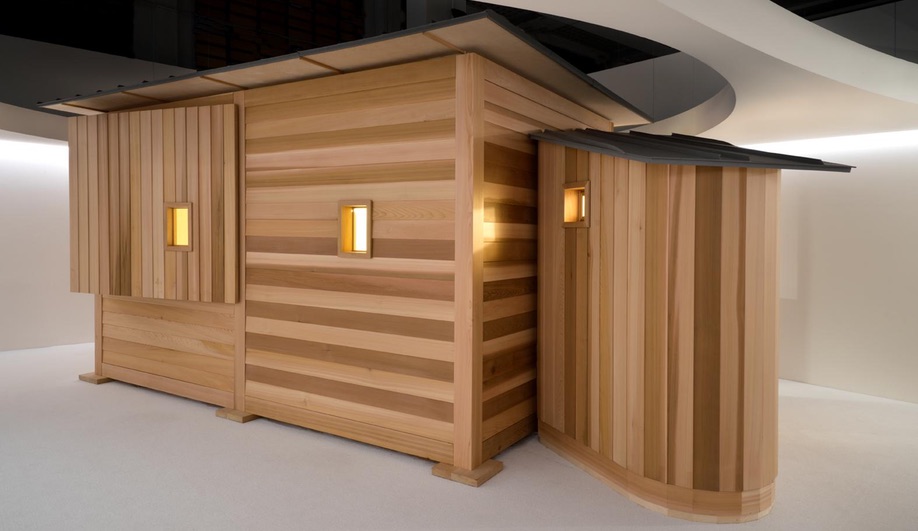 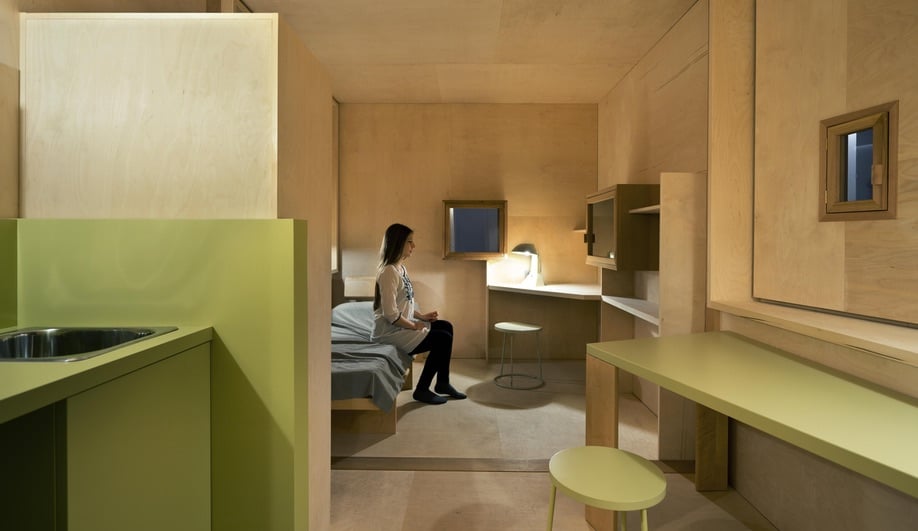 Putting Things Into Perspective, by Elisabetta Terragni
A room meant to be experienced, but not lived in – calculated in its emptiness. Elisabetta Terragni constructed this interior along two axes to deliver two stunning views. From one end, trompe l’oeuil graphics depict illustrated portraits; from the other, these murals are warped beyond recognition, but the volumes of the room align to frame a stunning view. “Ideally, two individuals inhabit it,” Terragni says. “They are close, but cannot see each other – almost miss each other, although they can hear each other.” 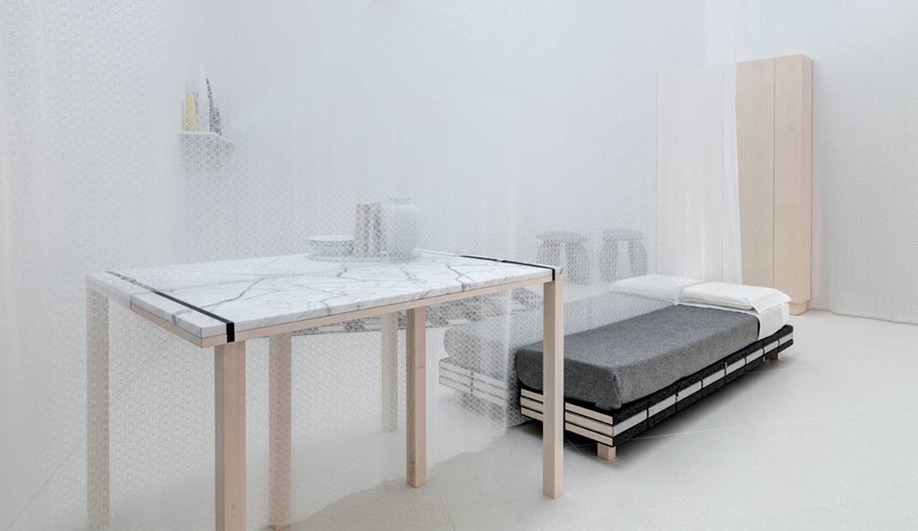 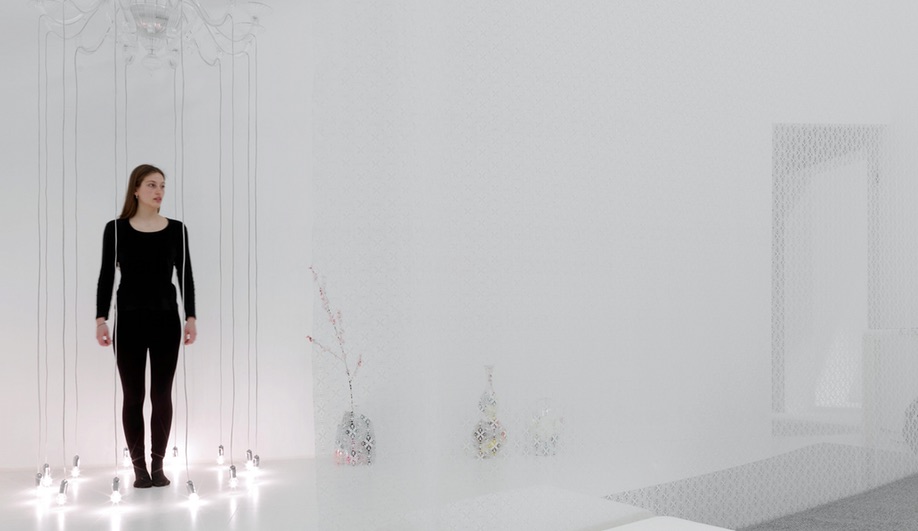 Resonances, by Andrea Anastasio
Resonances, by Andrea Anastasio
Split down the middle by a suspended lace curtain, Resonances is about the relationships between opposites – inside and outside, open and closed, isolation and intimacy. All the furnishings over daily life are present, but halved and arranged in a mirrored configuration along the axis of the curtain, turning one room into two without fundamentally changing the pieces’ functionality.

Ursus, by Duilio Forte
Vertically stacked higher than the exhibition hall’s ceiling, and enclosed by a cage of constructivist-inspired wooden scaffolding, Ursus’s interior space is shaped like the body of a massive bear; the entrance is in the head, and the main room is split between bathrooms and sleeping loft at one end, and a drawing room with a communal table at the other. Built-in furnishings – table, washbasin and suspended desk – replicate the bear motif at a smaller scale.

The Absence of Presence, by Marta Laudani & Marco Romanelli
There’s an almost David Lynch-ian quality to the elegant room by Laudani & Romanelli, with its blue-veined polished marble floors, blue walls, and heavy blue velvet curtains that encircle small, brilliant-white enclosures. The main interior is a veritable non-space, serving only as the matrix for these cordoned-off chambers, which divvy up such functions as dressing areas and reading rooms.

La Vie en Rose, by Claudio Lazzarini and Carl Pickering
In this tightly programmed 50-square-metre space (split in two by a corridor), furniture and fixtures meld one into the other, creating a landscape for living; individual elements can be adjusted, like set-pieces on a stage, to set the scene for different domestic activities. Twelve square metres are turned over to a greenhouse, which controls air quality and energy production, and even contributes food to the table. Glass wall panels in a range of red tones are screen-printed with organic pink photovoltaic ink, which can generate electricity from natural and artificial lighting – even feeding energy back into the same lights that power it.

My Prisons, by Alessandro Mendini
For Alessandro Mendini, ornamentation can feel like a prison – an “abyss of decoration … like the methodical self-building of walls and surfaces destined to deny me my freedom.” Stripping all this away, Mendini produced a box with sleek laminate surfaces in a bold graphic stripe; floors, walls and ceiling are indistinguishable apart from the lighting and the narrow door that lets visitors enter. Reductive to the extreme, the room exalts space and form over ornament.

Lift Bit, by Carlo Ratti
Lift-Bit is a piece of furniture that defines the room around it, all on its own. Developed with Vitra, Lift-Bit is ostensibly a sofa (for lack of a better word) that comprises modules of stool-like upholstered hexagons, like a human-scale version of the Giant’s Causeway. Each units is mounted on a jack mechanism that can be individually lowered or raised, using an app, to double its height. By adjusting the individual units, it’s possible to create a flat surface, a series of armchairs, a daybed – virtually any topology that could lend itself to supporting the human frame.

Intro, by Fabio Novembre
According to enfant terrible Fabio Novembre, our earliest, hazy memory of the space we occupy is of the womb. Combining the concepts of womb and egg, Novembre arrived at a disco-ball-like pavilion that’s lined with panels of red leather, moulded to form the inverted volume of a head; walking between two Metropolis-inspired statues-cum-shelving-units (“vestal virgins”), visitors turn to see the doorway is gaping mouth. Produced by Natuzzi, the experience encourages people to get lost in their own heads, contemplating their earliest awareness of the world before being “reborn” into it.