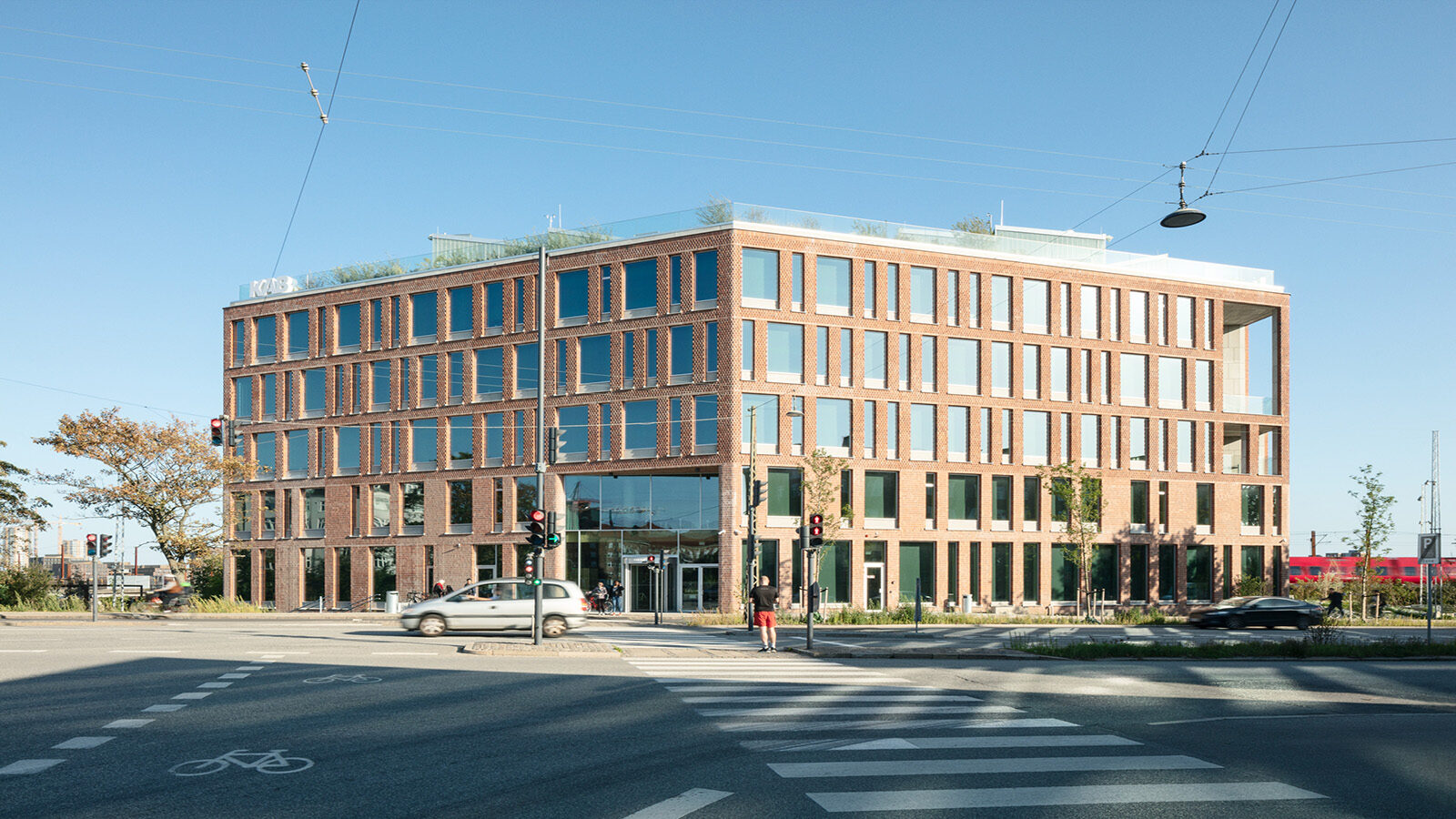 In Copenhagen, A Housing Agency Gets A Welcoming Office

Copenhagen has a housing crisis. Despite ongoing urban development, the Danish capital — and the country’s biggest population centre — increasingly lacks affordable homes as a shortage of housing drives prices up. KAB, a Danish cooperative social housing association, aims to help keep rents down and avoid price gouging in this precarious climate.

To better exemplify their ethos, the organization needed a new office space to welcome both their employees and the residents they serviced: Designed by Copenhagen-based Henning Larsen, the non-profit organization’s new headquarters bridges the gap between home and office, and between old and new Copenhagen. 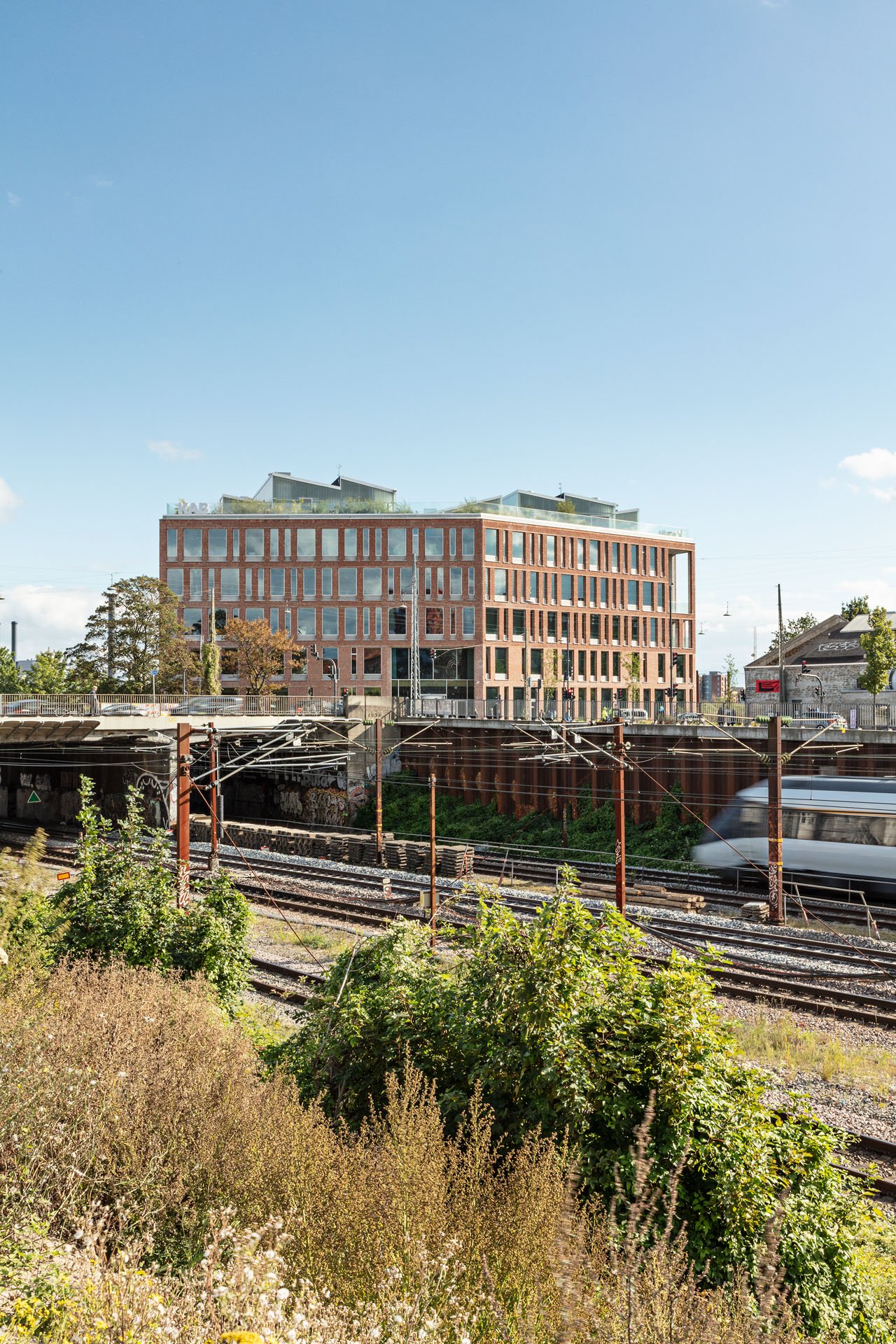 Nicknamed the KAB House — the 7,400-square-metres building gathers 400 employees under its roof. It’s an extensive operation: KAB manages 64,000 units, housing over 120,000 inhabitants — a figure that represents almost 10 per cent of the city’s population. A quarter million more are registered on the non-profit’s waitlist, and the demand shows no signs of slowing down. 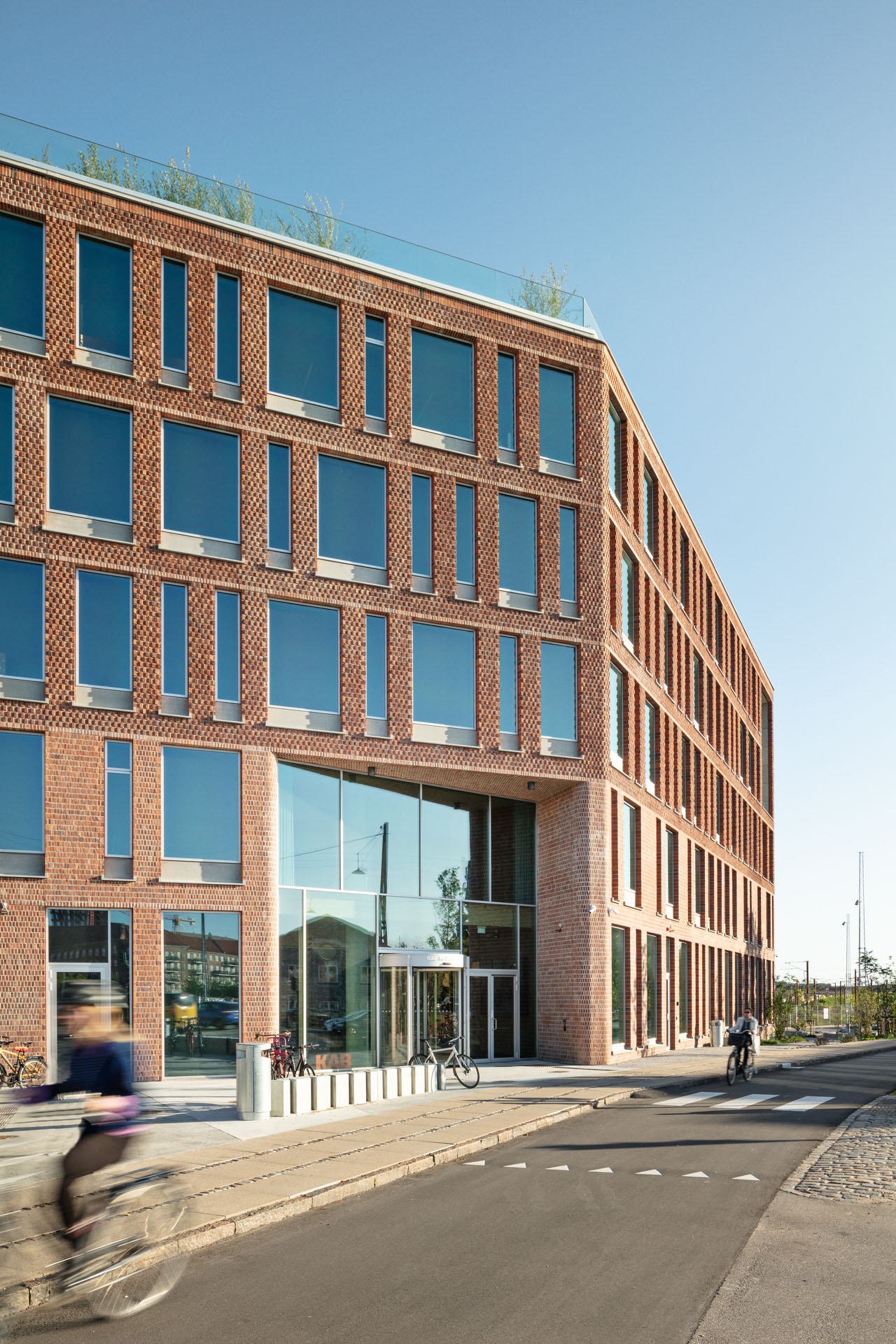 An intriguing brick façade welcomes visitors and employees to the headquarters — though it showcases contemporary bricklaying styles, the textured treatment is reminiscent of the materiality and pragmatism of KAB’s oldest properties. The building’s pentagon shape offers no front or back entrance — instead, the headquarters opens up to the city on all sides, ensuring a long-lasting connection to the neighbourhood. 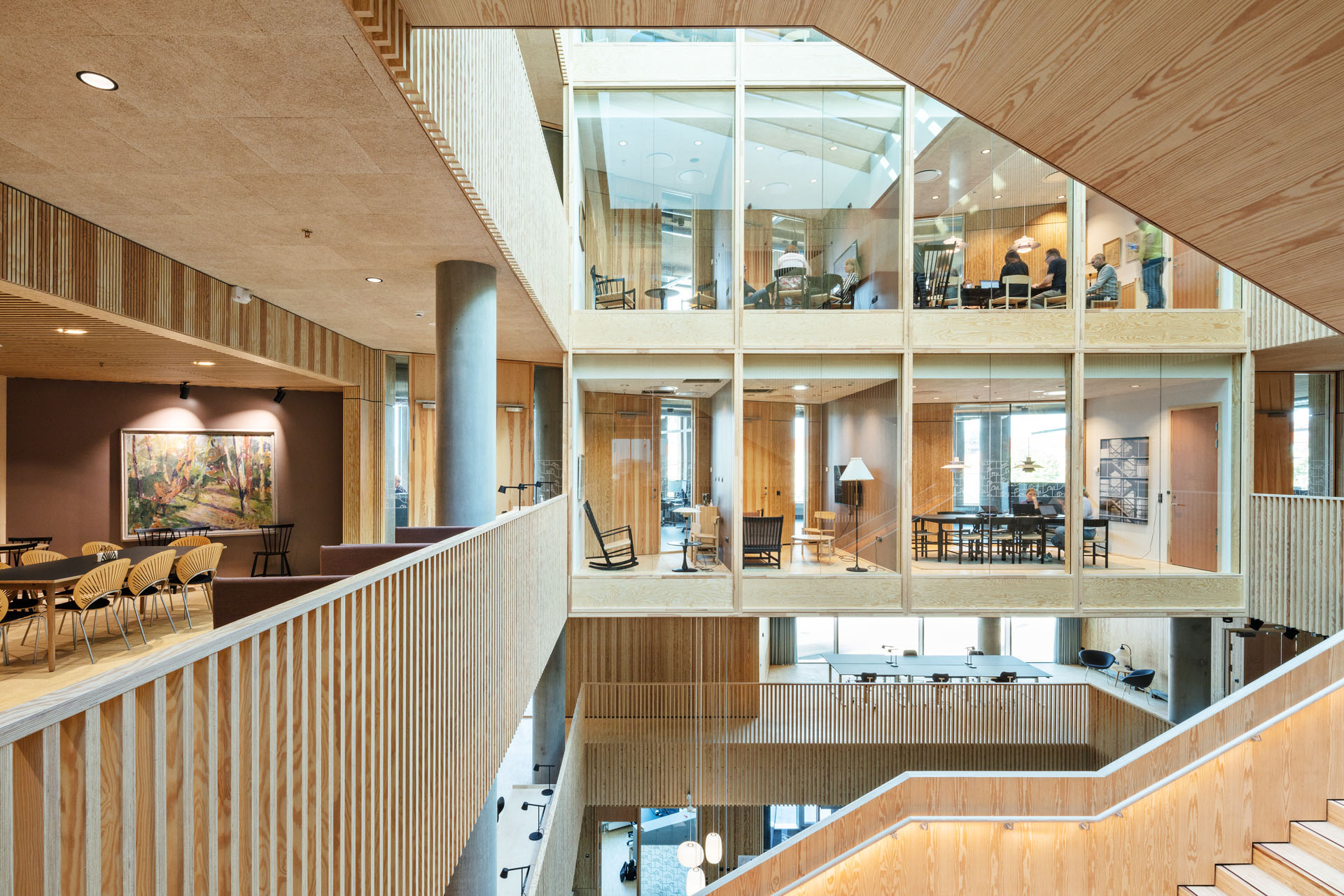 As a non-profit organization, KAB wanted their headquarters to remain open and transparent — figuratively and literally. To this end, large glass windows facing the building’s interior ensure a connection between insular meeting rooms and the world outside. “When you peek into the windows of the meeting rooms from the stairs, you are observing a household at work,” explains the firm. 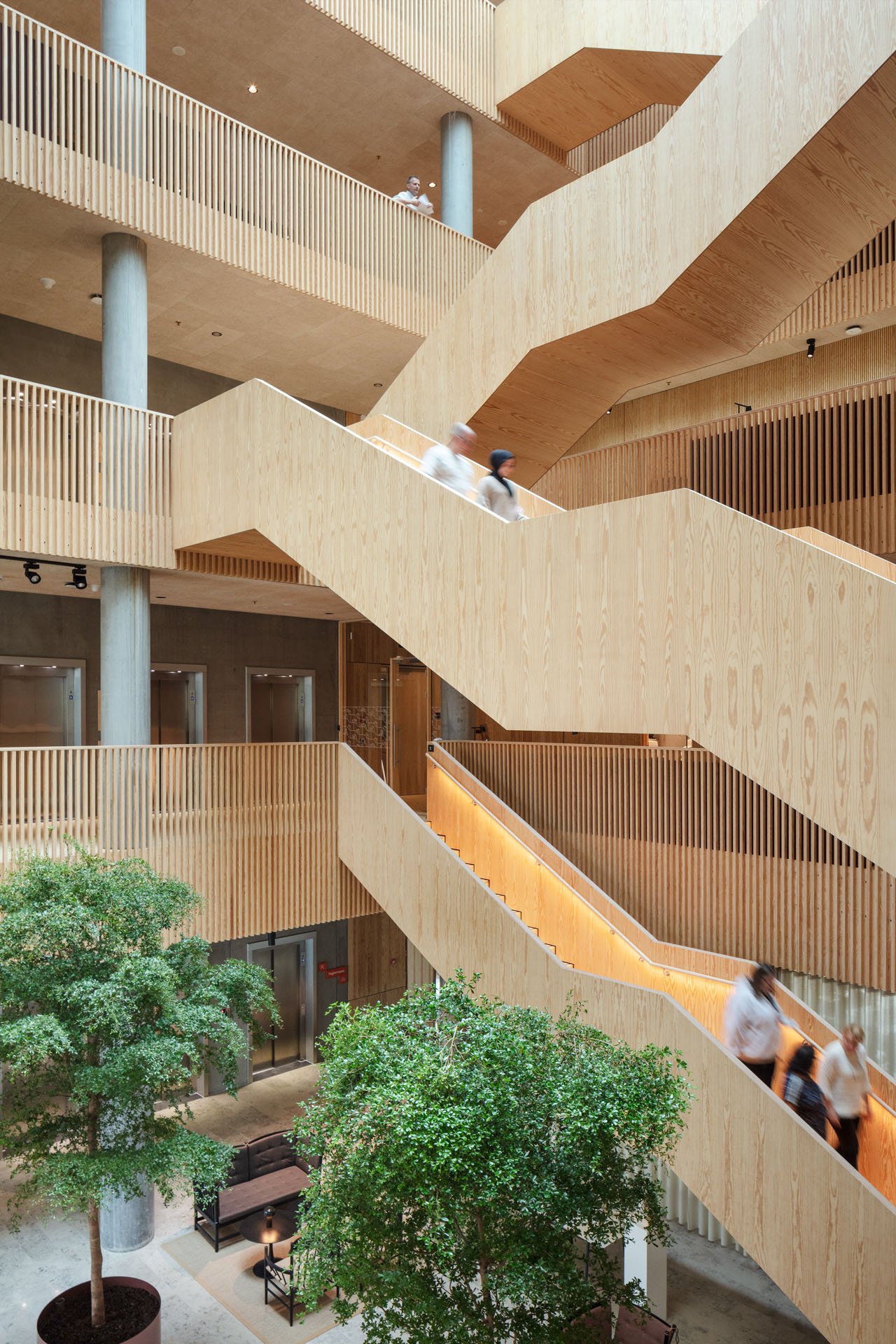 To infuse the office space with a quintessentially Danish “hyggelig” feeling, the designers adapted traditional aspects of the home (a living room, a kitchen, a winding staircase, even a rooftop garden) and implemented them within the headquarters. For instance, the zig-zagging stairs “are a play on the classic stairwell of residential buildings,” explains Associate Design Director Troels Dam Madsen. Nearly every corner of the interior is clad in wood, with the material’s distinct aroma and texture adding to this intimate effect. 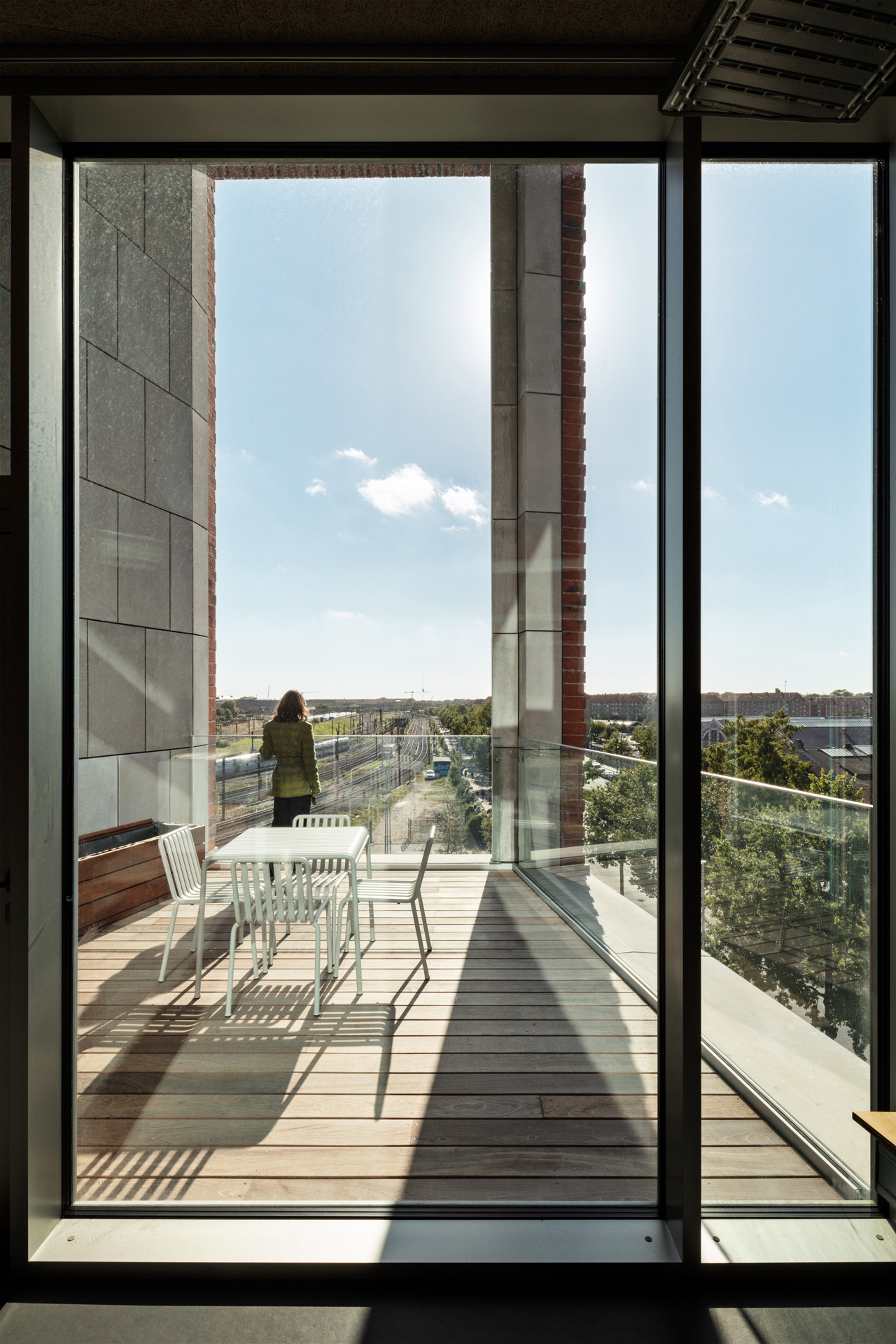 Outside, landscape architecture firm SLA have framed the building with green space, drawing inspiration from the surrounding urban environment. In a site awkwardly positioned between two intersecting railroad tracks and a highway, the redeveloped landscape acts as “a buffer against the noise and particle pollution of the track terrain,” says Mette Skjold, one of SLA’s partners. And on the highest floor, a rooftop urban garden welcomes employees and visitors alike to admire views of Copenhagen.

The tranquil, welcoming landscape rounds out an approach to building that is in accordance with KAB’s mission. According to Henning Larsen, the housing agency — and the design — strives to be “representative of Denmark’s approach to collectivism, welfare, and the home itself.”