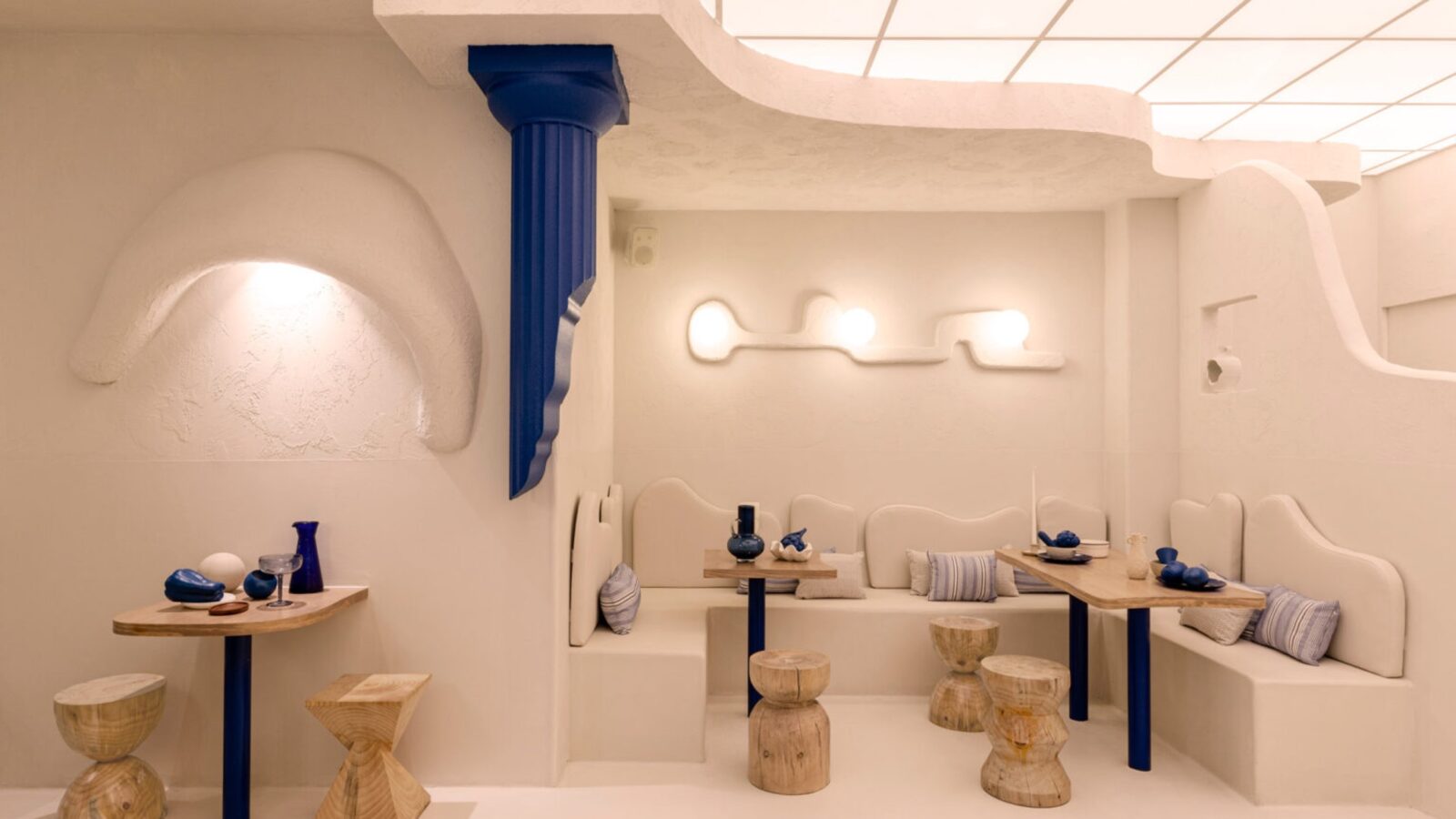 Designed by Masquespacio, Egeo transports visitors to the world of Ancient Greece with a modern-day twist. The firm, known for its reinterpretation of architectural styles, transformed the once static interior into a restaurant that dynamically embodies its Greek menu and creates an immersive experience for diners. 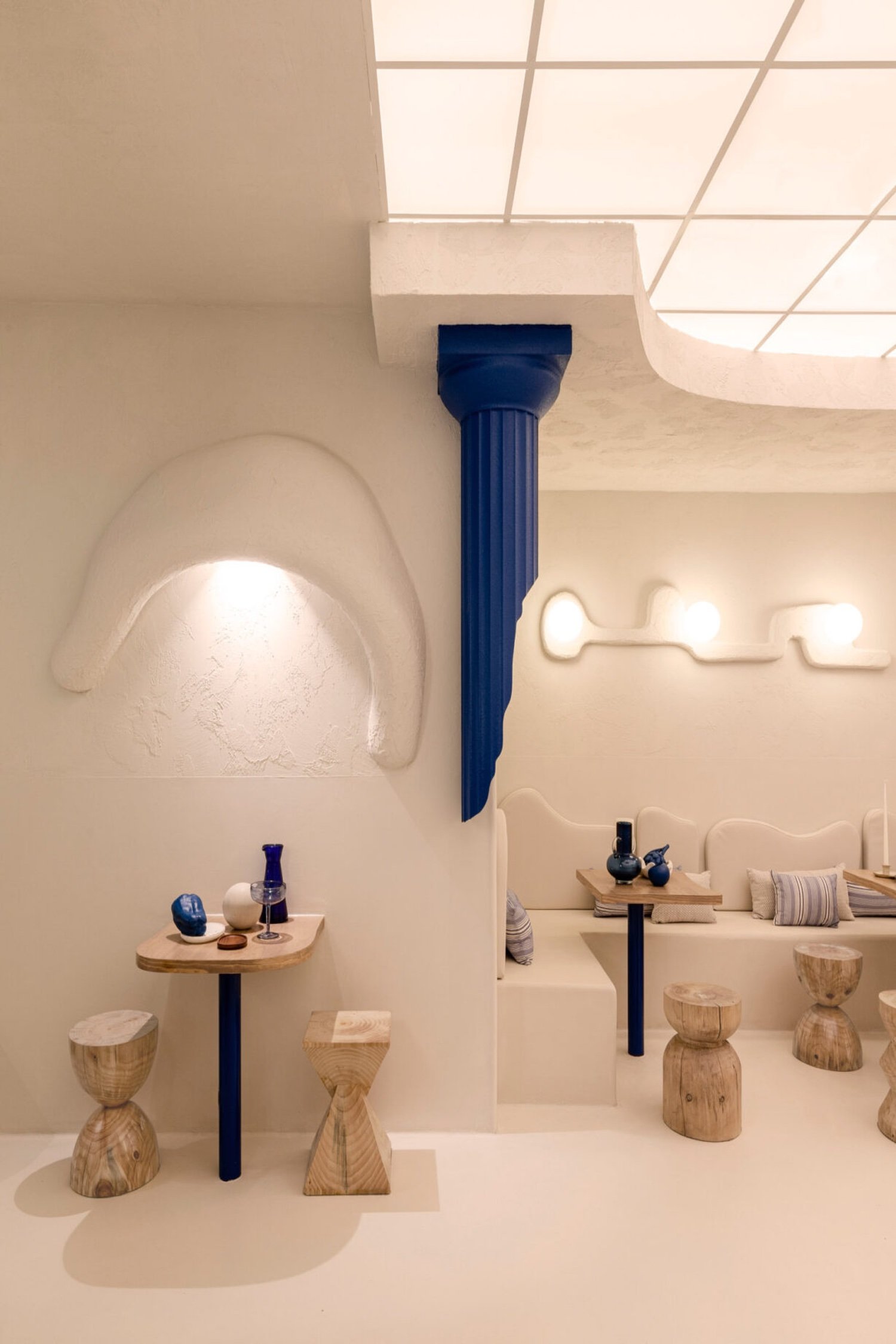 While paying homage to the aesthetics and icons of Ancient Greek architecture, Masquespacio’s design for the Valencia location aims to riff on Egeo’s recognizable Greek identity that is present in the interiors of their other venues throughout Spain. A vibrant blue and white colour scheme and cement-like materials — intended to mimic the mud that would coat the walls of early Greek homes as a means of insulation — were incorporated into the scheme to create texture and recall Mediterranean design. 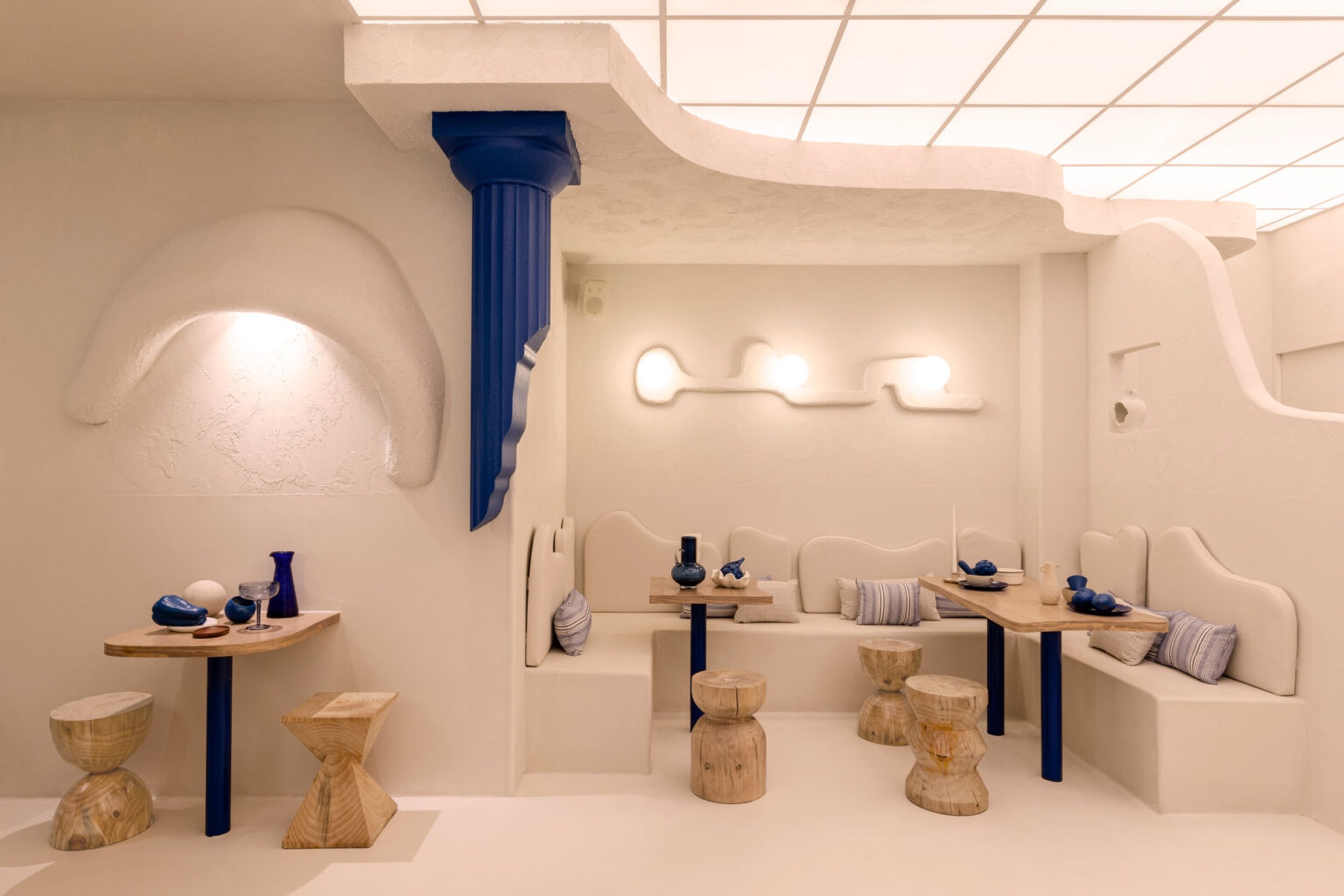 Accentuating Masquespacio’s design are custom asymmetrical light fixtures and raw timber wood stools that showcase natural organic forms — no two of which are identical. These hand-crafted elements are key to incorporating the essence of Ancient Greek design into a refreshingly modern aesthetic. 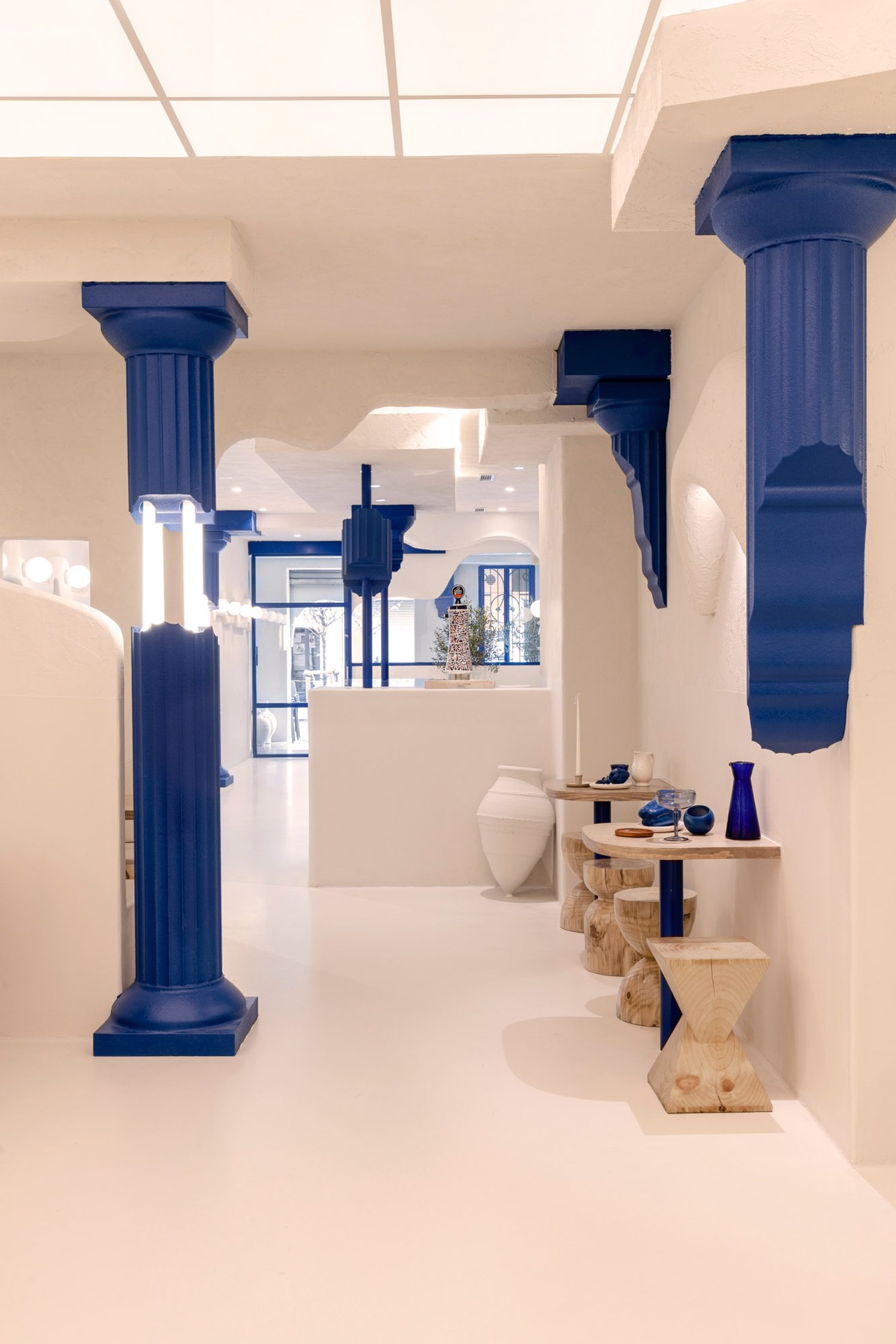 In contrast to their attempts to incorporate traditional construction methods throughout the restaurant, Masquespacio 3D-printed crumbling Doric columns to adorn the walls — a move that transforms once structural, hand-crafted elements into colourful, decorative accents. 3D printing allowed the designers to build LED rods into the columns, adding a futuristic touch and making the bright blue columns pop against the neutral interior. 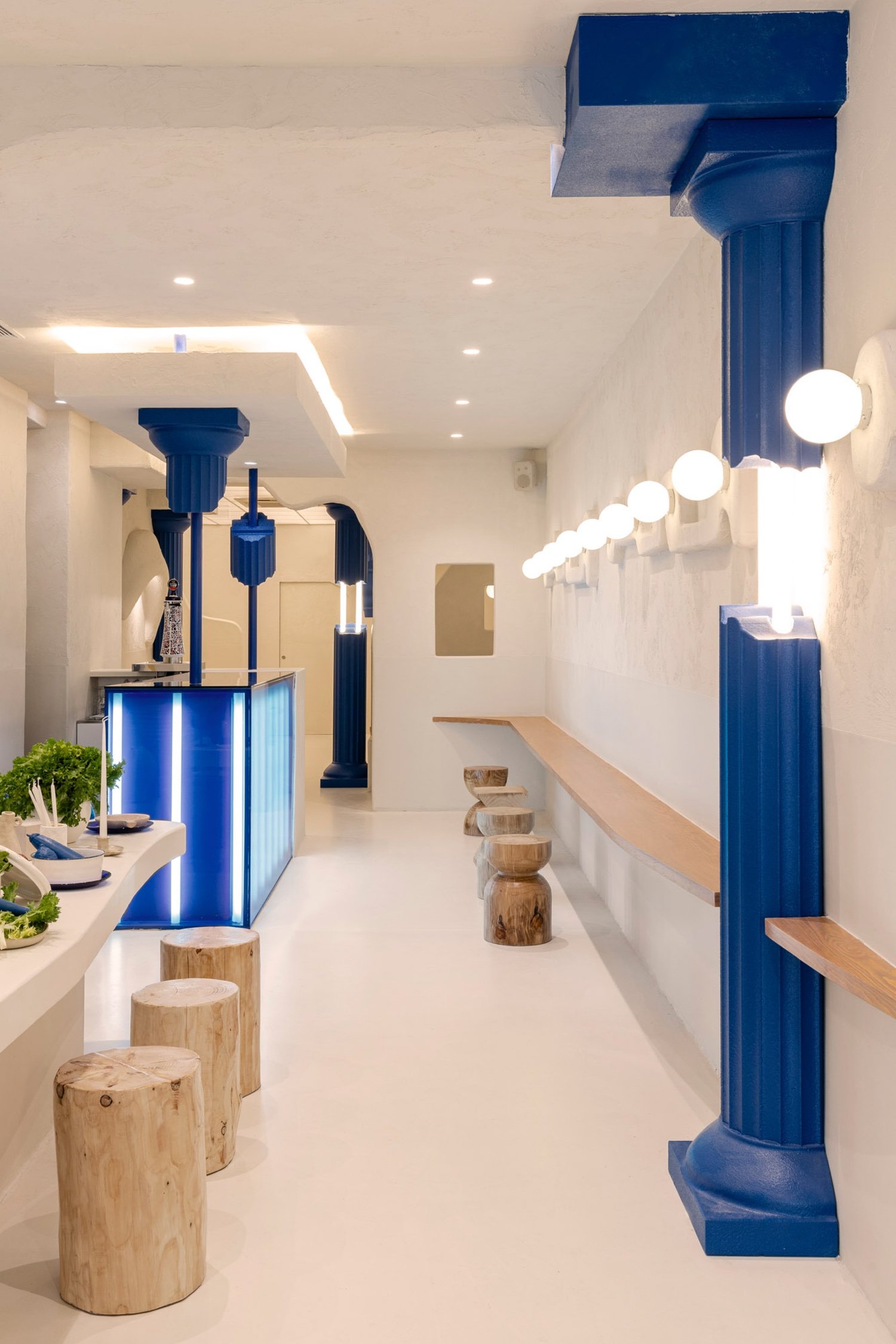 The captivating order bar is situated in the middle of the restaurant, intended to create the bustling environment that you would experience when visiting a busy Souvlaki Kiosk in a Greek Market. The strategic placement of the bar transports visitors right into the heart of Greek life, without ever having to leave Spain. Egeo’s diners are sure to get a taste of the Greek passion for delivering meaningful culinary experiences through the menu and the restaurant’s interiors.