Trillium Park Launches the Transformation of Toronto’s Ontario Place
The recent opening of Trillium Park, in Toronto, brings new green space to the city and marks a promising start to the revitalization of Ontario Place. 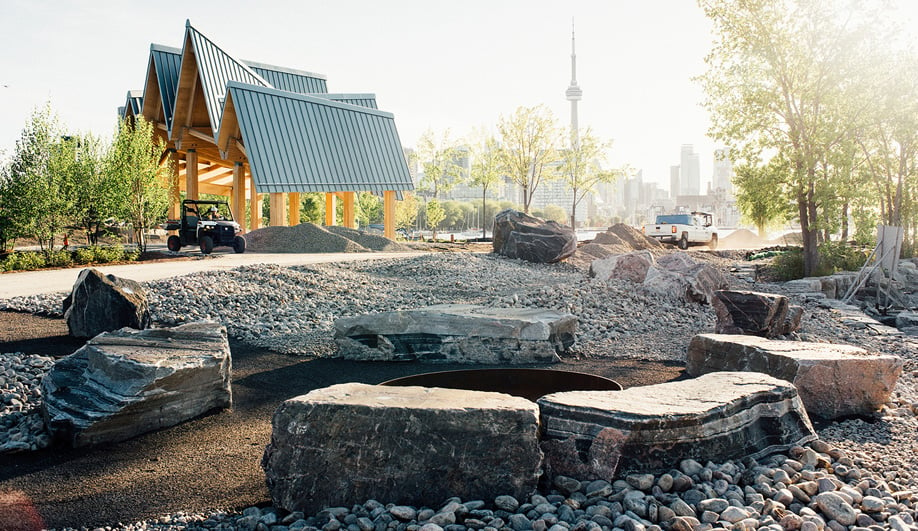 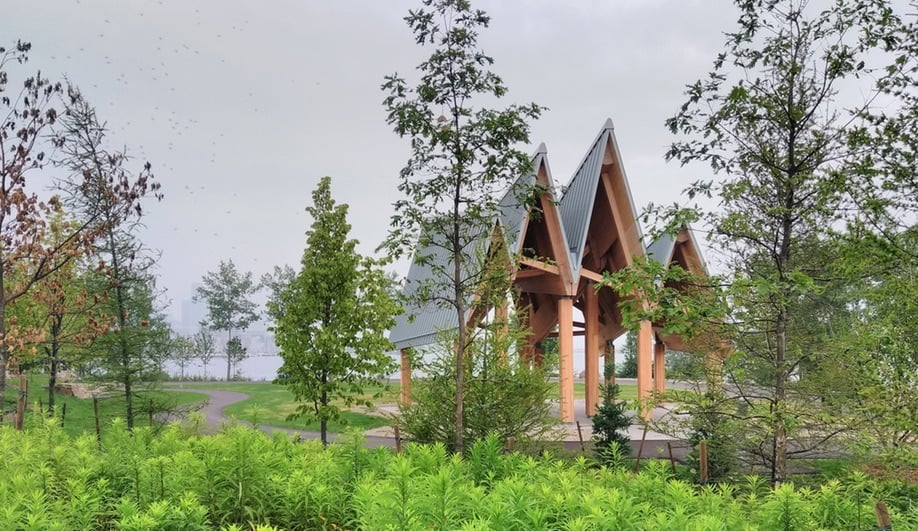 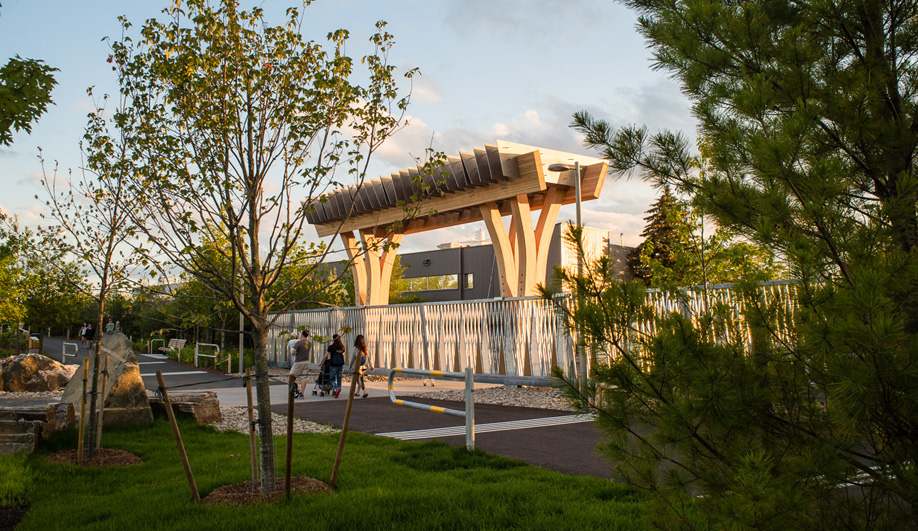 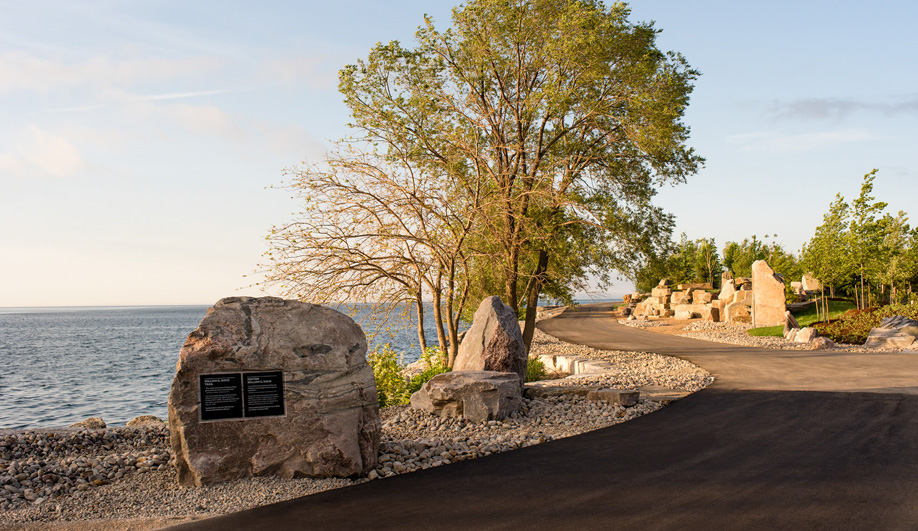 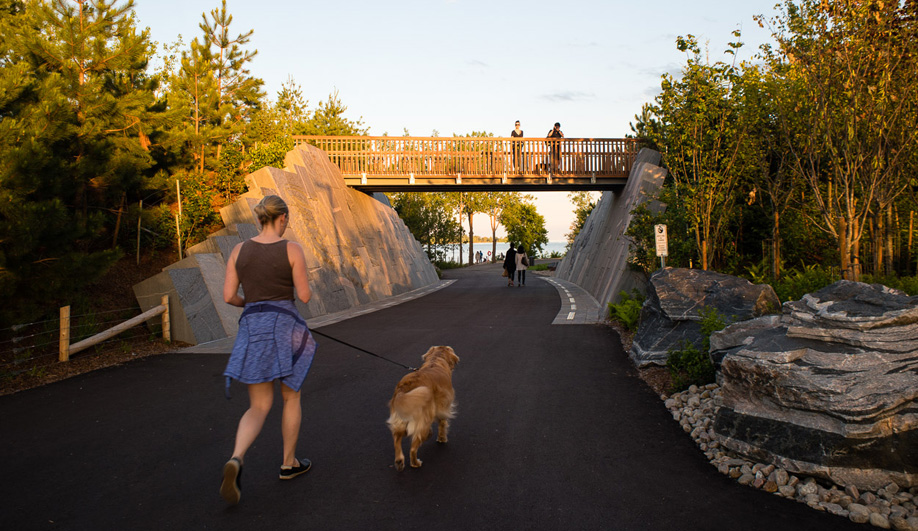 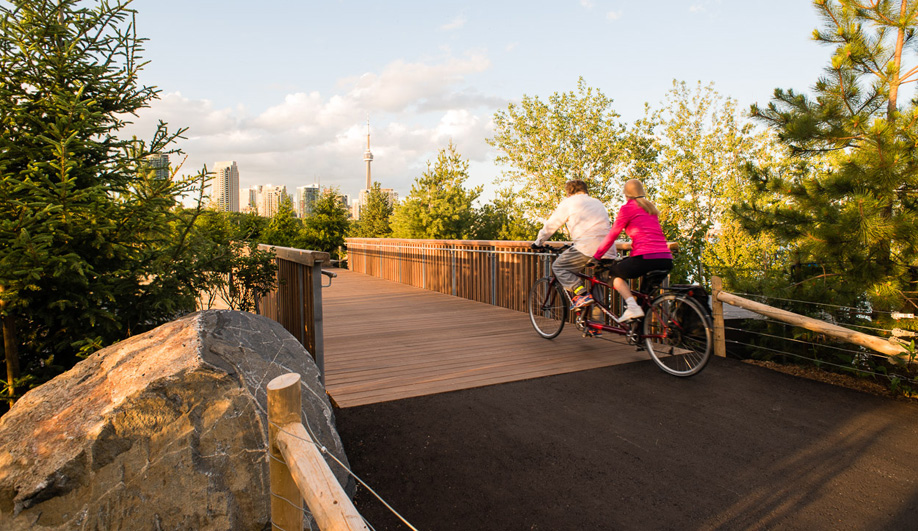 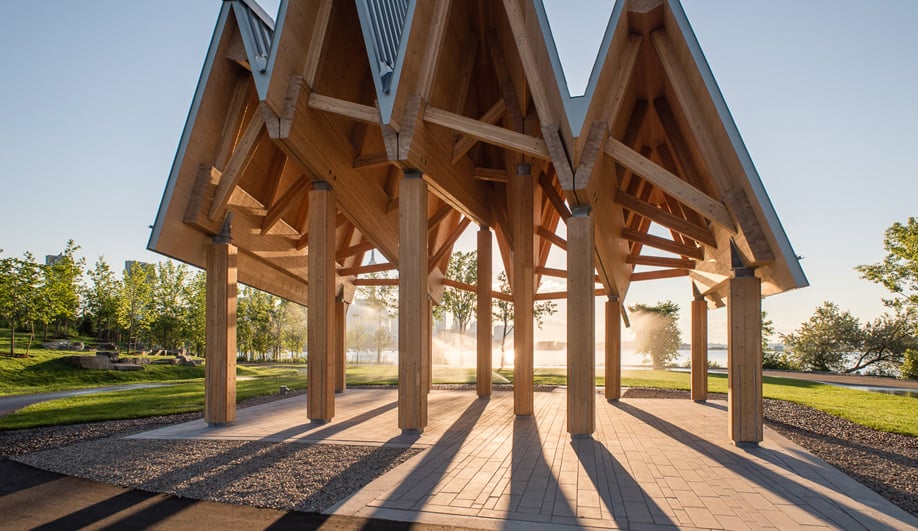 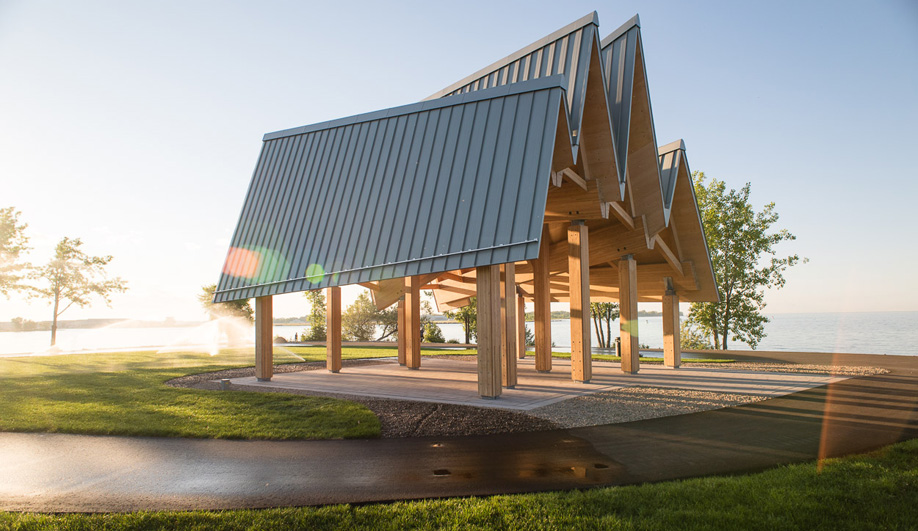 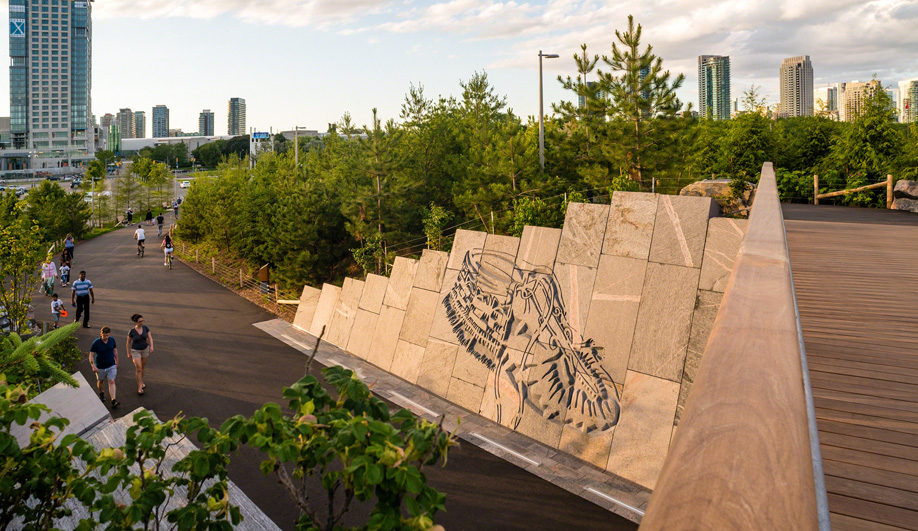 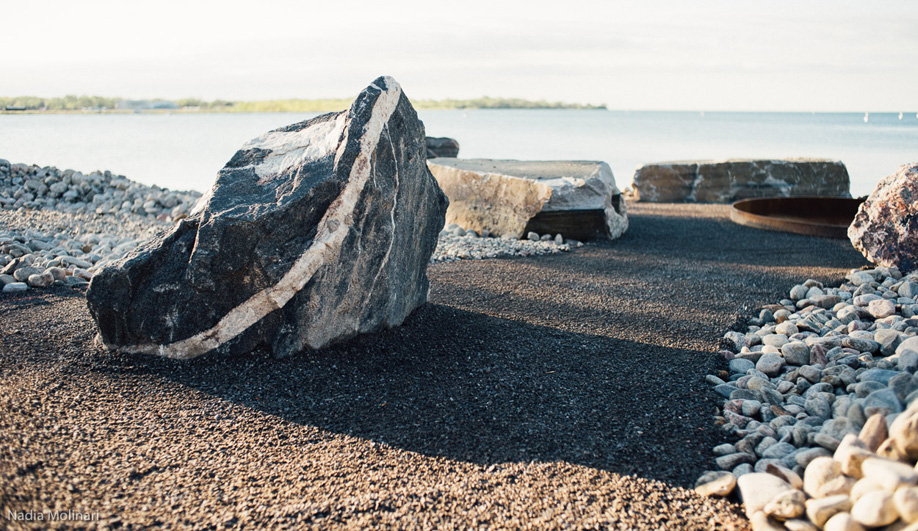 When it opened in 1971, spread across three artificial islands in Toronto’s west end, the Ontario Place theme park was a state-of-the-art, family-friendly attraction with an emphasis on outdoor entertainment. But even in the park’s heyday, the east end of the islands were never seen by tourists, as it was turned over to employee parking.

This began to change when the park closed for redevelopment in 2012. Last month, after two years of construction, the first phase of a new and improved Ontario Place opened to the public. Running the length of the largest island’s eastern shoreline, Trillium Park and William G. Davis Trail adds three-hectares of new public green space to the city. Where there was once a barren parking lot, visitors can now find walking trails that wind through a hilly patchwork of wilderness-inspired terrain, from sand and boulders to grassy knolls and meadows full of native wildflowers.

Local landscape architecture firm LANDInc, headed by Patrick Morello and Walter Kehm, oversaw the transformation. As Morello explains, “The public really never had the view from the east side of this island, toward the city – which is a pretty spectacular view.” Now, much of the park emphasizes postcard-worthy panoramas of Toronto’s skyline. While the existing parking lot offered LANDInc a blank slate to work with, Morello says, “the challenge was to look beyond simply beautifying the site, and to create something that’s experiential.”

The firm’s first move was to raise the entire site by 1.5 metres; atop this new canvas, they added an entirely new topology of peaks and valleys. Their goal in this was threefold; first, sloping the site gently towards the water directs views to the lake and skyline. “Elevation helps create the illusion of additional space by borrowing landscape,” Morello says. “It’s a very narrow park in some areas, but the elevation change allows you to connect to the surrounding waterscape. Once you get up to the Summit at the very end, you get these magnificent 270-degree views of the lake.”

Ramping the site gently up toward the north side and covering the steep downward incline with a woodlot also breaks sightlines to the service road and administration buildings below. From atop the ridge, the view to the north is primarily sky and trees, even though utility space is just a few steps away.

Finally, the land’s new peaks and dips create moments of discovery throughout the park. “You can be in areas where you don’t realize you’re only 6 metres away from somebody else on the path,” Morello says, “but because of the type of vegetation and the natural setting that’s been created, you don’t perceive them.”

Along this undulating terrain, LANDInc has incorporated a few built structures, as well as areas defined by their use of different plantings or materials. One of the first structures visitors encounter on entering from the city is a footbridge-topped ravine, whose sides are lined in 140 slabs of pewter-grey Northern Ontario granite and inscribed with a moccasin engraving. This mural, like the marker trees scattered throughout the park, are a nod to the traditions of the Mississaugas of the New Credit First Nation, members of which were crucial advisors during the park’s three-and-a-half year public consultation process.

Further along the path, a towering gate, with galvanized steel doors and a glulam arch topped in slanting aluminum plates, will eventually lead to the heart of a completely reimagined Ontario Place. Close by, a pavilion based on a concept devised by redevelopment master-planner West8 offers the final architectural focal point. Like the gate, the pavilion is topped with steeply slanting lines — a reference to the peaks of evergreen trees.

One final addition, a floating dock, was put on hold due to unusually high lake levels; when it’s added, Morello says, “it will feel almost like you’re on a northern Ontario lake, visiting the cottage for the weekend.”

LANDInc used stone to create a range of textures throughout the park, including a beach of river rocks piled around winding pebble paths. And, at the centre of the park, in what’s sure to be a kid-pleasing attraction, the designers included a climbable bluff assembled from 1,540 tonnes of Muskoka granite; the largest of these boulders weighs 47 tonnes.

“It’s symbolic of a glacial moraine,” Morello says. “We spent days at the quarry trying to find unique stones; each one was hand-picked by our office. In fact, one day, one of the grandkids of the stonemasons was playing around on the rocks, so we watched him to discover what he was drawn to, and found some really unique stones.” The final composition was decided at the quarry, then carefully mapped and reassembled at Ontario Place using GPS and surveying tools.

But Trillium Park’s real draw is its greenery. An investment in 28,000 shrubs and 1,200 trees — and especially older red oak, red pine and sugar maple, rather than saplings — pays off; already, the park feels like a thriving ecosystem, and has attracted red-winged blackbirds and cedar waxwings. Elsewhere, guests can wander across grassy meadows, the largest of which is the Summit, a hill at the end of the trail, inspired by northern Ontario’s drumlins.

Atop the Summit is Hough’s Glade. “It’s a little opening in a wooded area — a memorial to Michael Hough, the original landscape architect on Ontario Place,” Morello says. “He very much believed in the regional landscape, and really, our whole concept is founded on that. The plantings in the Glade haven’t grown in yet — it will take a few years — but in time, it will be a very contemplative space.”