The sun was out, and so were the stars – the stars of the architecture and design scene, that is. Hundreds of industry notables flooded the Evergreen Brick Works to celebrate as Azure handed out 18 trophies in recognition of their achievements. Beautiful weather attended the crowd’s arrival, setting the perfect scene for a little pre-ceremony revelry.

Guests came from as far as China, Belgium and Austria in the hopes of claiming one of this year’s trophies, which were designed by Omer Arbel of Bocci. The prelude and postlude of the ceremony were live piano performances incorporated into a large-scale sculpture by Toronto’s Castor. The all-white piano was nestled inside a fragile barricade-like array of hundreds of fluorescent light tubes; using the same wireless induction that brings a Tesla coil to life, the tubes were individually lit to respond to sounds from the piano, resulting in a unique and ethereal interactive performance. 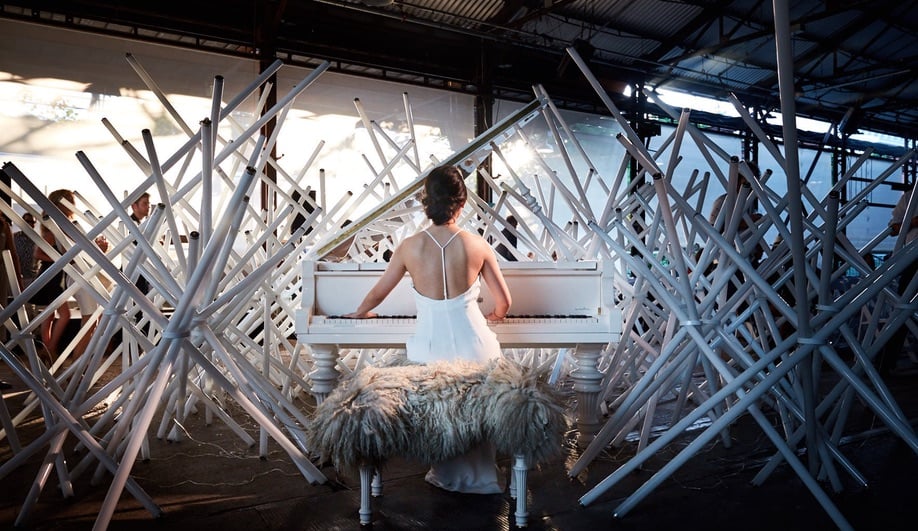 Castor’s installation of fluorescent light tubes reacted to the music, lighting up to create an ethereal interactive display.

No celebration would be complete without food and drink flowing freely, and gala guests enjoyed Italian fare from Sud Forno and wines from Stratus. There was plenty to see, too, with installations from the AZ Awards’ presenting partners: displays of Rado’s latest watches, Keilhauer’s Wheels collection of office furnishings, and a sleek new R8 V10 and RS7 from Audi. A caricature artist was on hand to entertain guests by rendering them on slabs of Dekton surfacing from Cosentino. After a ceremony hosted by writer Ian Brown of the Globe and Mail, and featuring a special address from guest of honour Gaetano Pesce, guests danced into the night.

You can find a full list of this year’s award winners here, or check out Azure’s July / August issue – out now – for full profiles of the 18 AZ Award winners, and 48 awards of merit.