Fumihiko Maki Creates an Aesthetic Outlier in Shenzhen
Synonymous with sweatshops and sprawl, the Chinese city of Shenzhen is banking on Fumihiko Maki’s elegant seaside culture complex to legitimize its brand of unfettered creativity. 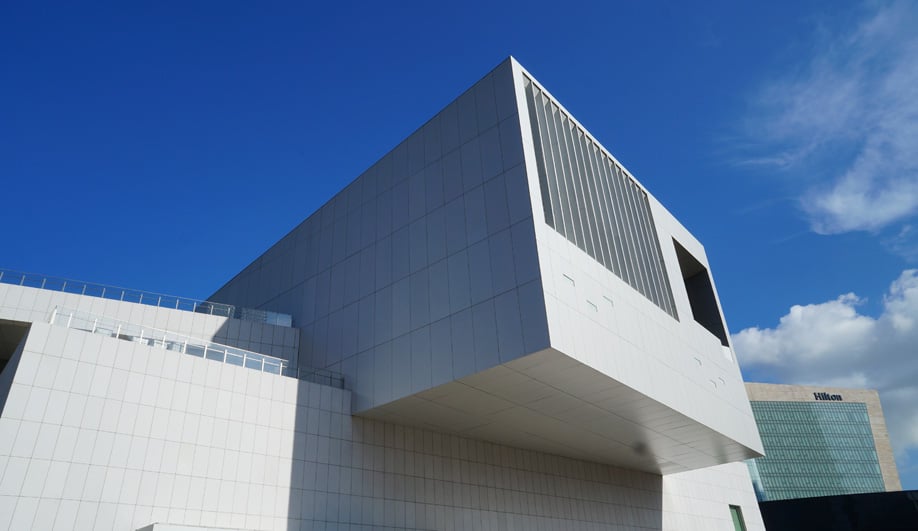 Synonymous with sweatshops and sprawl, the Chinese city of Shenzhen is banking on Fumihiko Maki’s elegant seaside culture complex to legitimize its brand of unfettered creativity. Can such a sober building do the job? Simon Lewsen reports on an industrial powerhouse’s faith in stoic architecture.

The Sea World Culture and Arts Center in Shenzhen stands out, not because it’s flashy, but because it’s subtle – or at least subtler than the buildings around it. It’s situated in Shekou, an entertainment district popular with the many expats who live in the city, which sits across Shenzhen Bay from Hong Kong. The surrounding buildings include glass-and-steel towers, a sprawling Hilton hotel and a landlocked passenger ship containing pubs, a dance hall and a 250-room resort.

The architect for the Sea World Center, Fumihiko Maki, principal of the Tokyo firm Maki and Associates, didn’t pay much attention to the jumbled regional aesthetic. “It wasn’t our aim to reflect the styles of the surrounding buildings,” says Tatsutomo Hasegawa, an associate at the firm and the project manager for Sea World. “This is one of the first cultural centres in Shekou. We wanted it to be an independent entity.” 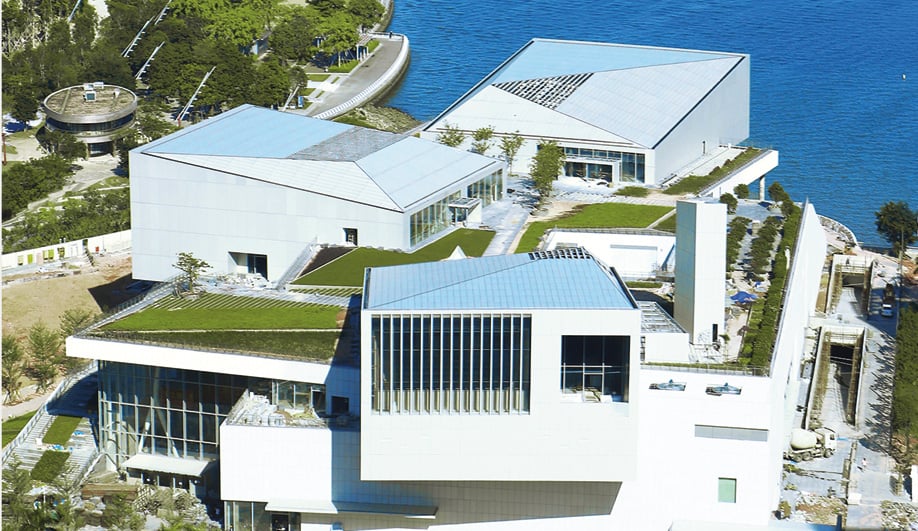 The centre consists of three white-granite volumes that cantilever over a podium alongside Shenzhen Bay.

If the building resembles anything, it is Maki’s other works, which combine European modernism (sharp angles, heavy massing) with a distinctly Japanese sense of craftsmanship. The building program includes retail space, a theatre and a temporary satellite location for Britain’s Victoria and Albert Museum. The architecture – three white-granite cantilevers extruding from a podium – is sparer, more clean-lined and more minimalist than virtually anything else in the Shekou area. 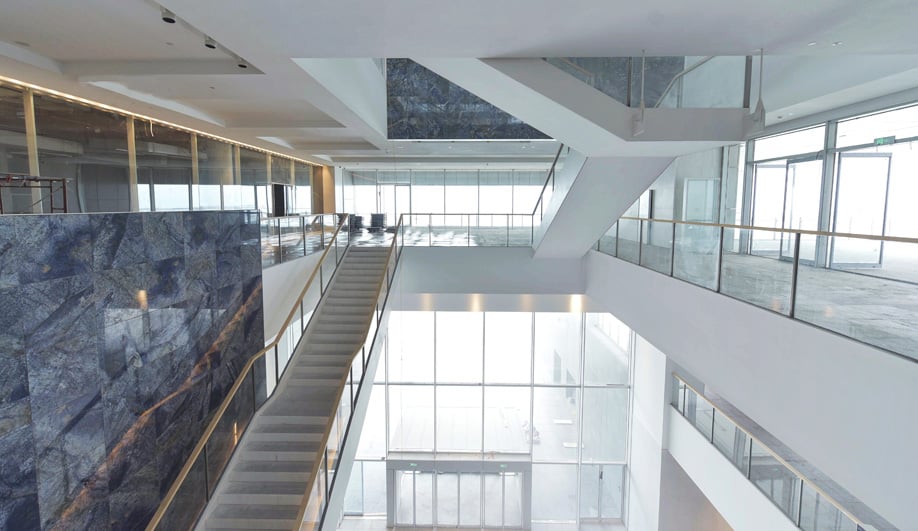 But while the centre may be an aesthetic outlier, it represents its region in at least one respect: It’s a major creative-class institution in a metropolis that has become an unacknowledged creative hub. “If you’re a traditional design journalist doing a fluff piece on the 10 hottest cities, you wouldn’t think of Shenzhen as anything outstanding,” says Brendan Cormier, a senior V&A curator who oversaw the inaugural Sea World exhibition. “For instance, you don’t see a preponderance of Shenzhen product makers during Milan Design Week.”

These days, the archetypal design city is a craft-cocktail-and-brewpub paradise along the lines of San Francisco or Brooklyn; Shenzhen, with its showy towers and massive factories, doesn’t seem to fit the bill. But the region excels at a particular type of creativity: one that tends toward the logistical and the entrepreneurial – and sometimes, admittedly, flies in the face of intellectual-property norms. 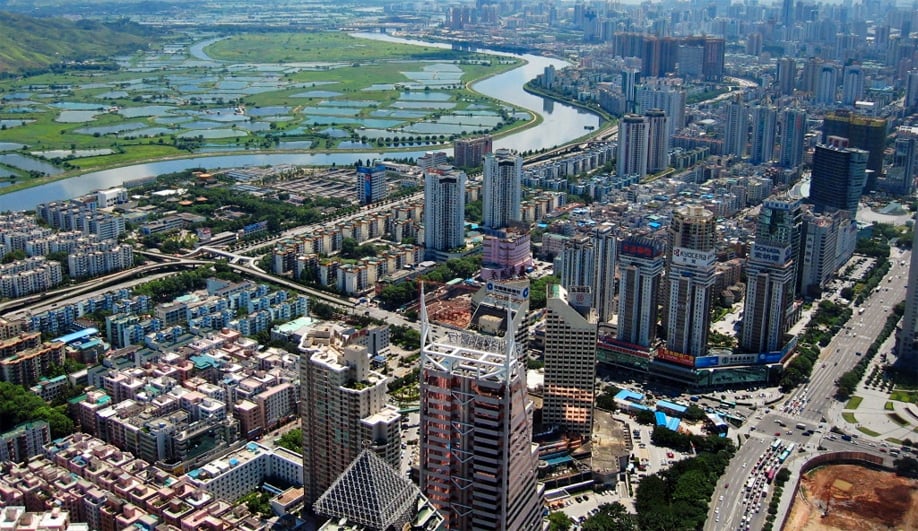 The city as it exists today began as an experiment in 1979, when Deng Xiaoping designated the area a “special economic zone,” a quasi-free-market enclave where businesses had relative independence from Beijing, tax incentives lured foreign investors and entrepreneurs made serious money. The current Chinese economy was effectively born in Shenzhen. In four decades, the city’s population has grown from 30,000 people to 12.5 million.

Although the region has become famous for its sweatshops, its contribution to the global economy goes beyond raw human labour. Mobile phones, for instance, were invented in Chicago and refined in Tokyo, Seoul and Helsinki, but it was Shenzhen that figured out the logistics of making them on the cheap. “People think Shenzhen isn’t creative because it didn’t invent these phones,” says Mary Ann O’Donnell, a Shenzhen-based anthropologist and artist. “But Shenzhen made the infrastructure to produce the phones. That too is a creative endeavour.”

Today, the city has the world’s largest market for shanzhai electronics – what Westerners call knock-offs. But shanzhai makers don’t merely copy products, O’Donnell points out: They add features, fix bugs and mix and match elements to create impressive hybrids. Over time, the city’s brand of entrepreneurial zeal has also resulted in such homegrown innovations as Shenzhen-based Dji’s Phantom drone, an airborne camera employed in filmmaking, aerial mapping and firefighting. 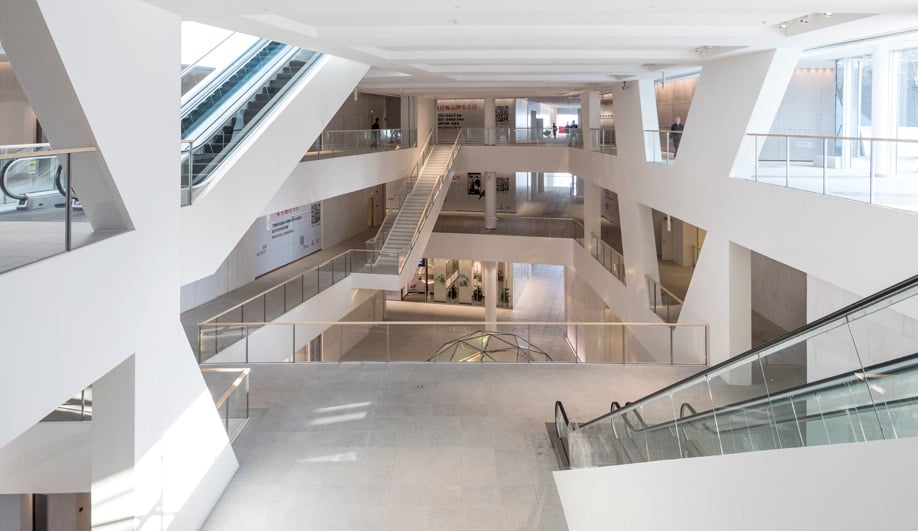 Sober and graceful, the Sea World Center confers legitimacy on this undercelebrated creative culture. Like the Bi-City Biennale of Urbanism/Architecture – which began in 2005 and takes place partly in Shenzhen – the project signals to design aficionados that the city merits a closer look. This in itself is an achievement, even if few people would argue that the building is Maki’s masterwork.

In fairness to the architect, the brief wasn’t easy. The client, China Merchants Group, a state-owned conglomerate, requested extensive retail space. To accommodate these demands, Maki had to work with a 26,000-square-metre footprint. Such a bulky structure will inevitably lose some cohesiveness: At least one critic has likened the site to a shopping mall. 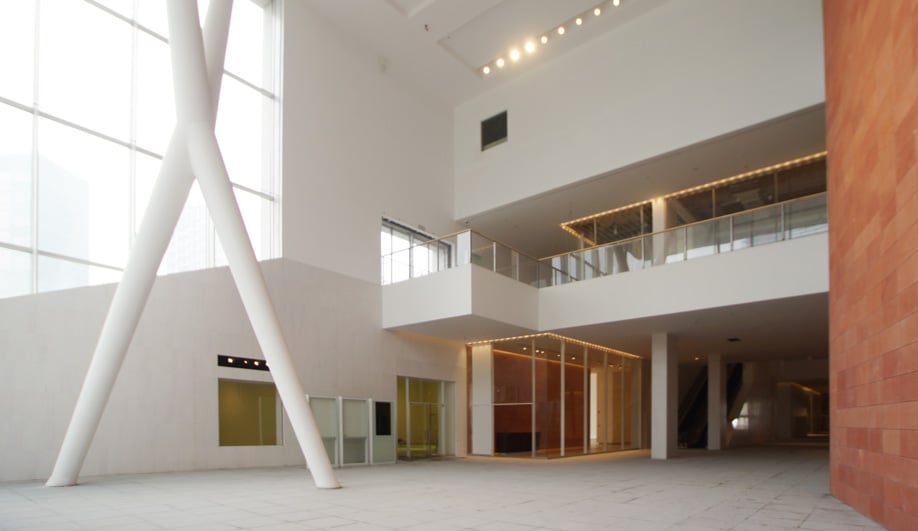 Inside, each of the building’s volumes has its own material accent, such as red sandstone in the northern one shown here.

But while the centre may be too big, few shopping malls are as architecturally inventive. The complex has three main entrances, each with its own material accent: red sandstone on the northern side, blue granite on the southern (the one nearest the ocean) and white marble at the central atrium, where skylights bring sun deep into the building. Throughout the interiors, Maki used a variety of white materials – stone, aluminum panels, painted gypsum board – that create a sense of texture and variation without undercutting the minimalist ambience. And, because Shenzhen has few public spaces, he insisted that the podium roof double as a park – one that is freely accessible 24 hours a day. 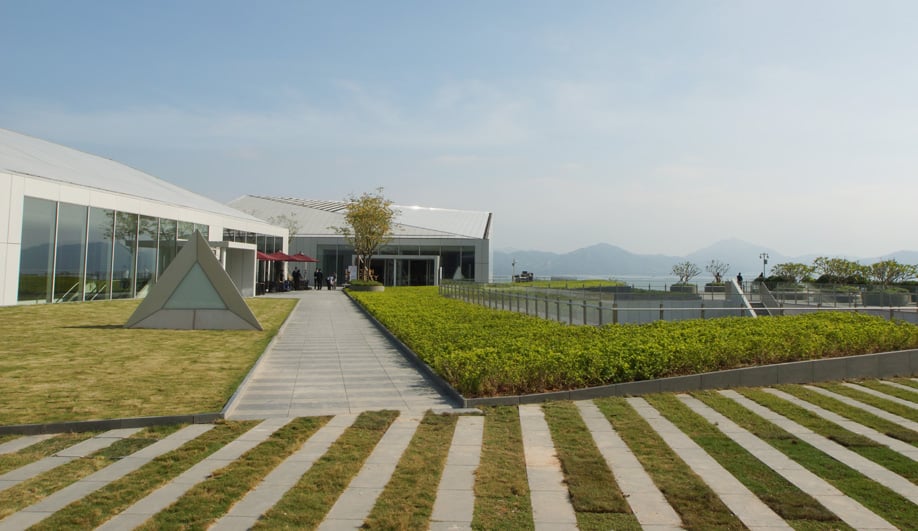 Architect Fumihiko Maki insisted that the Sea World Center’s roof double as a 24-hour park in order to make it more accessible.

That last feature makes the project feel civic-minded and friendly, even if the building is at odds, architecturally, with its surroundings. Cormier’s curatorial work also helps tether the complex to its locale. His exhibition, a sampler of the V&A’s permanent collection, showcases 250 design objects, 15 of them locally sourced. Pointedly, one-of-a-kind global masterworks – such as a chandelier made of dandelion seed heads by the Dutch firm Studio Drift – share space with shanzhai electronics; an Alexander McQueen dress sits side by side with a Shenzhen school uniform. By placing such pieces in close proximity, Cormier situates Shenzhen within a transnational design ecosystem. 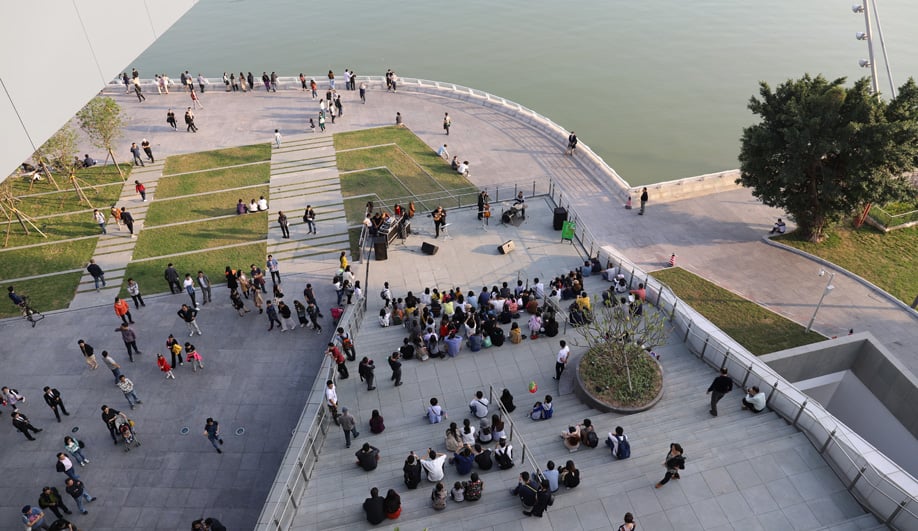 His notion of the city – as a realm where the local collides with the global – couldn’t be more pertinent to the present political moment. The metropolises of the Pearl River Delta, which include Shenzhen and Guangzhou, are vital to Chinese president Xi Jinping’s Belt and Road Initiative, which will see China investing hundreds of billions of dollars to build a Eurasian trade and transport network that might rival its transatlantic counterpart. The maritime component of this system would run through the South China Sea and the Indian Ocean, linking the Pearl River Delta cities with southern Asia, Africa and Mediterranean Europe.

Such a project will put Shenzhen at the centre of a powerful commercial system and no doubt create logistical, legal and design challenges to which the city’s creative resources will soon be applied. The Sea World Center, therefore, isn’t just a testament to what the city has become; it may also be a sign of what it seeks to be.

Does Maki’s architecture reflect such ambitions? Perhaps not intentionally or explicitly. But it’s interesting that two of his cantilevers face the interior of the country, while the third extends outward, to the South China Sea and world beyond.