Building Permanence: Germany’s Attempt to Design Stable Refugee Housing
The key to integrating massive numbers of refugees, Germany has found, is stable housing that accommodates families of all sizes. But will the rest of the world - and Germany itself - take heed? 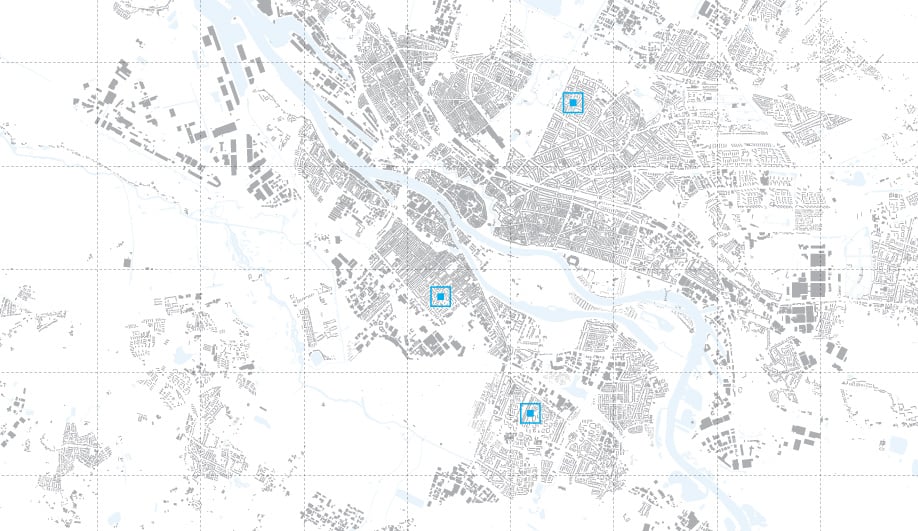 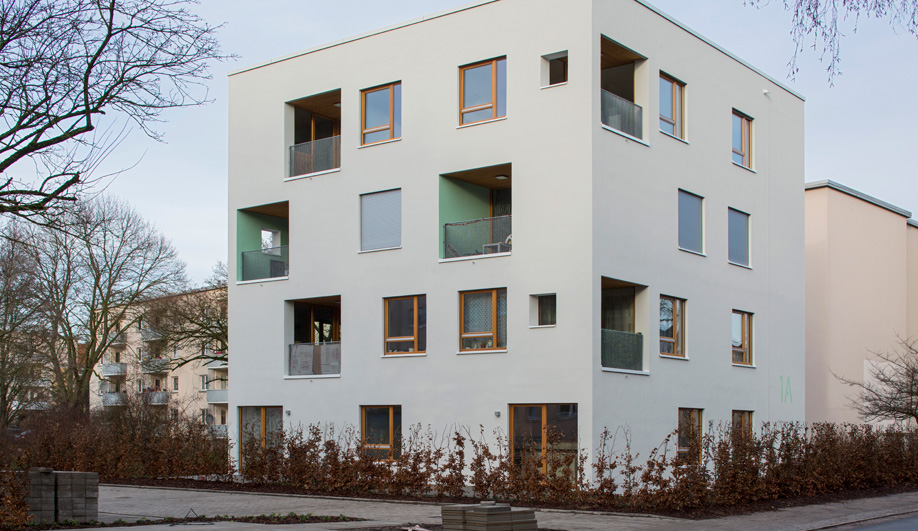 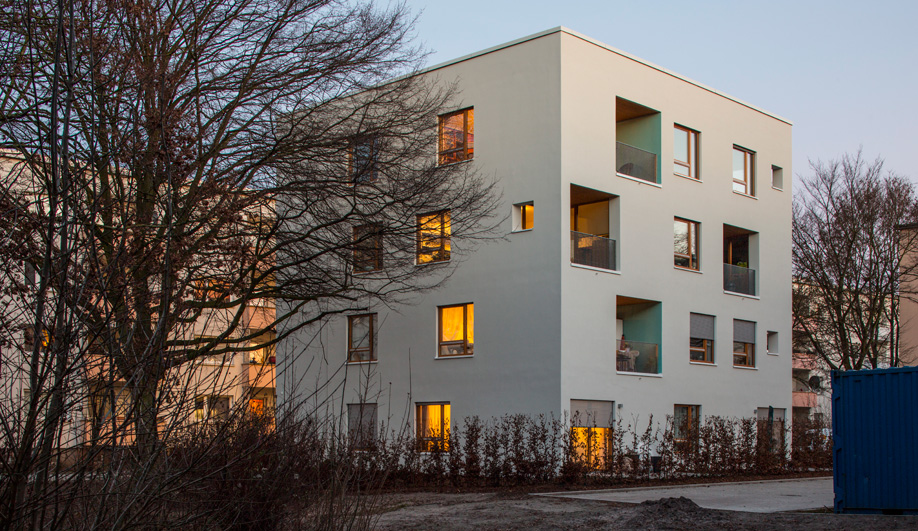 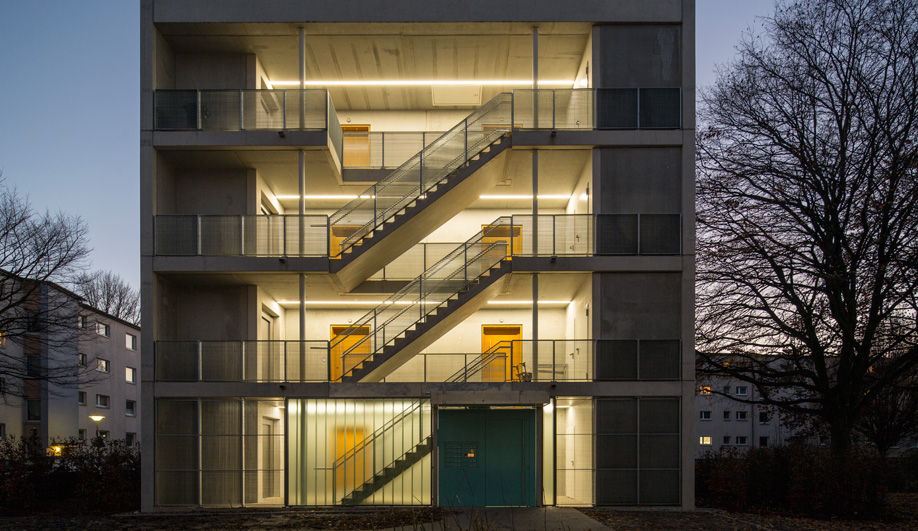 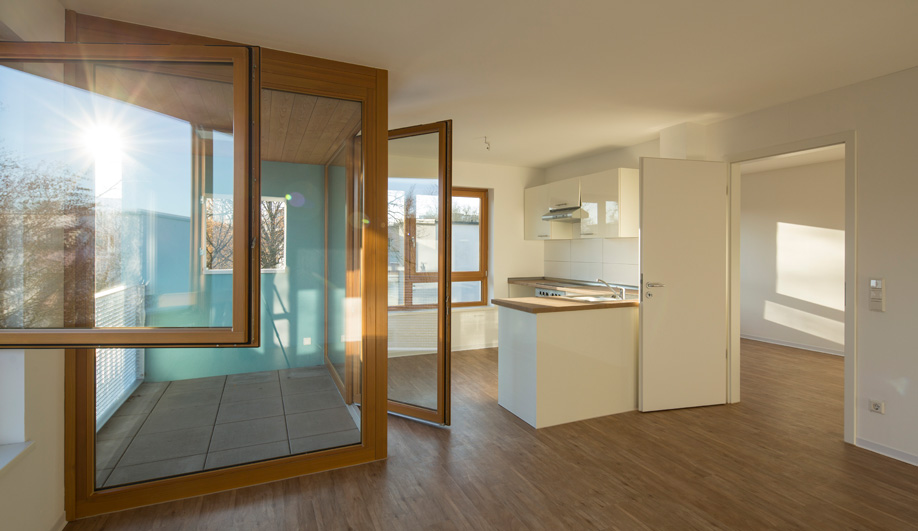 Punkt Cube interiors boast lots of natural light. Newer incarnations will include sliding doors that allow long-term occupants to expand or contract a room’s floor plate at will.

The key to integrating massive numbers of refugees, Germany has found, is stable housing that accommodates families of all sizes. But will the rest of the world – and Germany itself – take heed?

In late 2015, task forces charged with housing an unprecedented influx of refugees into Germany were knocking on doors all over Berlin – at former town halls, at the former headquarters of the East German secret police, at school gyms, army barracks, sports complexes and office buildings. Occupants of these government-owned buildings sometimes protested that they had conferences or meetings planned for the next day and couldn’t possibly accommodate the newcomers.

“It was, ‘I’m sorry, sir, not tomorrow – definitely not tomorrow,’” says Sascha Langenbach, a spokesperson for Berlin’s State Office of Refugee Affairs (LAF). In fact, the task forces told the occupants, the army would be coming within the hour to start installing thousands of beds. “So please hand over all the keys.” 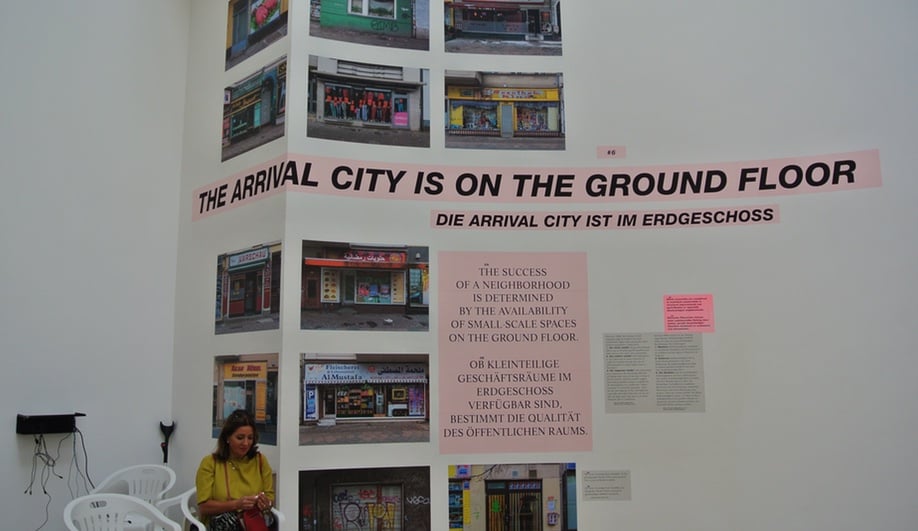 Worldwide, the past few years have seen a flurry of proposals for architecture and design aimed at migrant populations. Some are practical (pop-up kitchens, coats that unroll into sleeping bags, life vests recycled into backpacks or shelters), while others are fanciful (fabric skyscrapers erected via helium balloon). Since 2015, however, the arrival in Germany of some one million refugees, many fleeing conflict in Syria, has sparked a frenzy of actual construction to meet the housing needs of these newcomers.

This influx was the subject of Germany’s entry at the 2016 Venice Architecture Biennale, mounted by the Deutsches Architekturmuseum (DAM) and entitled Makrooing Heimat; the exhibit, a meditation on the country’s reception of immigrants, was inspired by Canadian journalist Doug Saunders’ 2011 book Arrival City. Over the past three years, DAM has continued to track the country’s varied responses to the challenge; its database of refugee housing projects currently has nearly 80 entries.

But as emergency shelters close and more permanent housing solutions are sought, German architects, urbanists and designers are emerging from their nation’s experience with at least two major conclusions. The first is that designers and governments need to overcome the mentality of temporariness in order to plan for the migration of the two billion people expected to be displaced by conflict or climate change over the next century. The second is that the idea of “architecture for refugees” is itself a flawed premise that is likely to reproduce the failed public housing experiments of the past – and the social repercussions that have come with them. 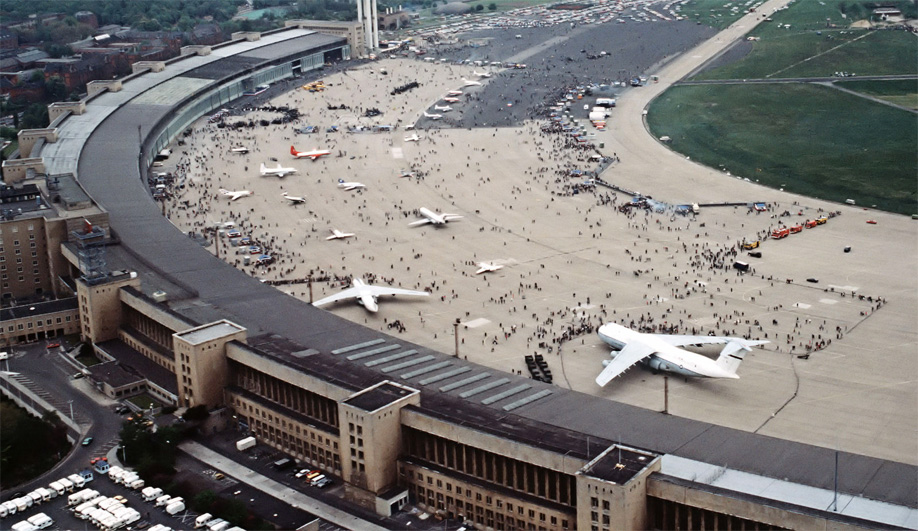 Berlin’s LAF can be refreshingly honest about its failures, and Tempelhof Airport may be said to be the departure point for Germany’s architectural soul-searching. Built in the 1930s as a boast of Nazi power, the limestone terminal and its seven hangars together occupy 300,000 square metres. When the task force arrived at Tempelhof, then long decommissioned, Germany’s national broadcaster was preparing to hold its year-in-review party inside Hangar Two.

Instead, the complex was rapidly converted into a refugee camp in the middle of the city, eventually housing as many as 2,750 people. During some periods, the hangars held rows of tents; in others, thin white partitions created cramped spaces in which people slept sometimes 10 or 12 to a room. Overhead lights were turned off and on at set times, and the noise of thousands of people echoed off the metal roof.

“One word … makes more than 500 echoes,” Parwiz Shafizad, a former journalist from Afghanistan who lived at Tempelhof for over a year, told the Washington Post. “Some children, in the middle of the night, start[ed] crying.” In January of 2016, Deutsche Welle reported that refugees were being bussed to local swimming pools each day since Tempelhof lacked showers. “Before we arrived, we were told that Germany helps families who have children … [but] I feel like we’re living in the Stone Age,” a pregnant Iraqi woman told Public Radio International.

Håvard Breivik, an architect affiliated with the Norwegian Refugee Council, visited Tempelhof with a group of students. He told me that the partitions created a paradox: “No privacy but also nowhere to socialize – the space is really open but also all occupied with these smaller units.” People spent up to 18 months in conditions designed to accommodate basic bodily needs while ignoring social needs. Although laundry services were provided, the space was strung with clotheslines as people recreated ordinary chores.

Inevitably, fights broke out and women reported being afraid to use the washrooms at night. Some architects with greater cultural knowledge of spatial arrangements in Syria, Iraq and Afghanistan were able to make small improvements. German-Syrian architect Yasser Shretah, who collaborated on a recent article about Syrian housing typologies for German architects, noticed that two common rooms were both filled with men, while women stood blocking the corridors. The answer was a sheet of paper saying “Women’s room.”

The curator of Making Heimat, Anna Scheuermann, says “Heimat” is a word with a difficult history: Loosely translated, it means “feeling at home,” but under the Nazi regime it took on connotations of racial purity. DAM wanted to reclaim the word by talking about architecture’s role in helping new arrivals feel at home in Germany. In times of emergency, how could irregular spaces be modified to accommodate large influxes of people without stripping them of their humanity? 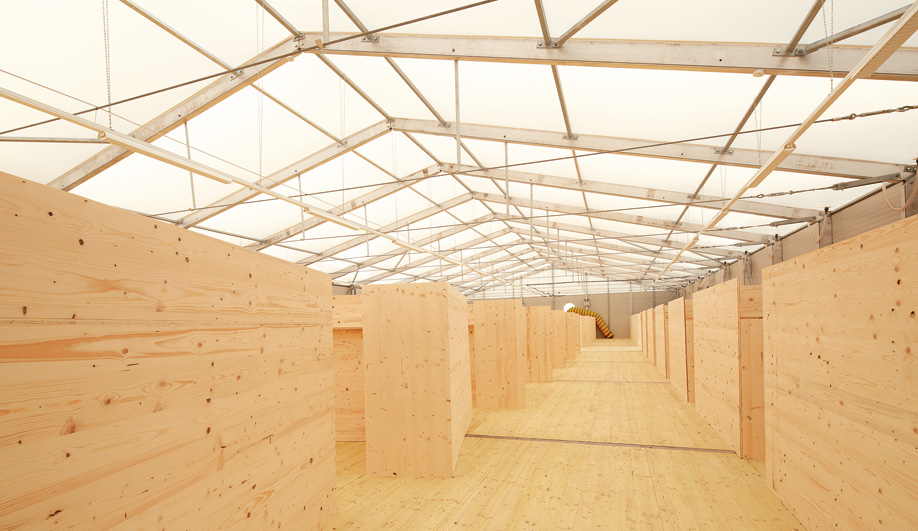 As far as temporary lodging goes, Gu00fcnther and Schabertu2019s award-winning wood halls in Munich (now being dismantled) are the gold standard. Among other features, partition walls were zigzagged to ensure greater privacy.

Jan Schabert, of the firm Günther and Schabert architekten, led a team whose design for a series of light-frame wooden halls in Munich won the Berlin Award 2016 Heimat in der Fremde. Due to fire regulations, he told me, the wooden partitions had to be less than 1.6 metres high, but that meant that anyone passing by could see over their tops. To overcome the problem, he decided to push the rows of partitions out of true – that way, rather than walking flush with the side of a long rectangle, someone passing down the aisle would be presented with a series of zigzagging corners that would prevent looking over the walls. In addition, after some wrangling with authorities, Schabert traded four sleeping spaces for one social space: a bench-cum-phone-charging-station. To make the bare wood more comfortable, Schabert modelled the angle of the seat and back on the work of Dutch designer and architect Gerrit Thomas Rietveld, creating “the longest Red Blue Chair on the planet.”

As changes in Germany’s policies have resulted in the acceptance of fewer asylum-seekers, emergency shelters like Tempelhof and Günther and Schabert’s halls are being closed or converted. In Berlin, a controversial alternative opened in July 2016: a series of “Tempohomes,” a variation on the Containerdorf or shipping-container villages whose shapes, textures and configurations can be so attractive to experiment-minded architects. Even though Berlin is still establishing new Tempohome sites, Langenbach seems exhausted by the thought of continuing to house up to 5,000 people in these temperature-unstable structures, especially given the expense.

Like the sheet of paper saying “Women’s room,” the alternative to expensive temporary housing is simple, yet has been surprisingly difficult for governments to conceptualize. “We have a completely wrong narrative about refugees,” says Kilian Kleinschmidt, a 25-year veteran of the U.N. High Commission for Refugees. “That narrative is the story we’ve been telling since the Second World War – about voluntary return to the place of origin.” Most people displaced by war or climate change, in other words, are not temporary guests in the countries and cities that receive them – they are, in effect, in their new homes, which should be built to last. 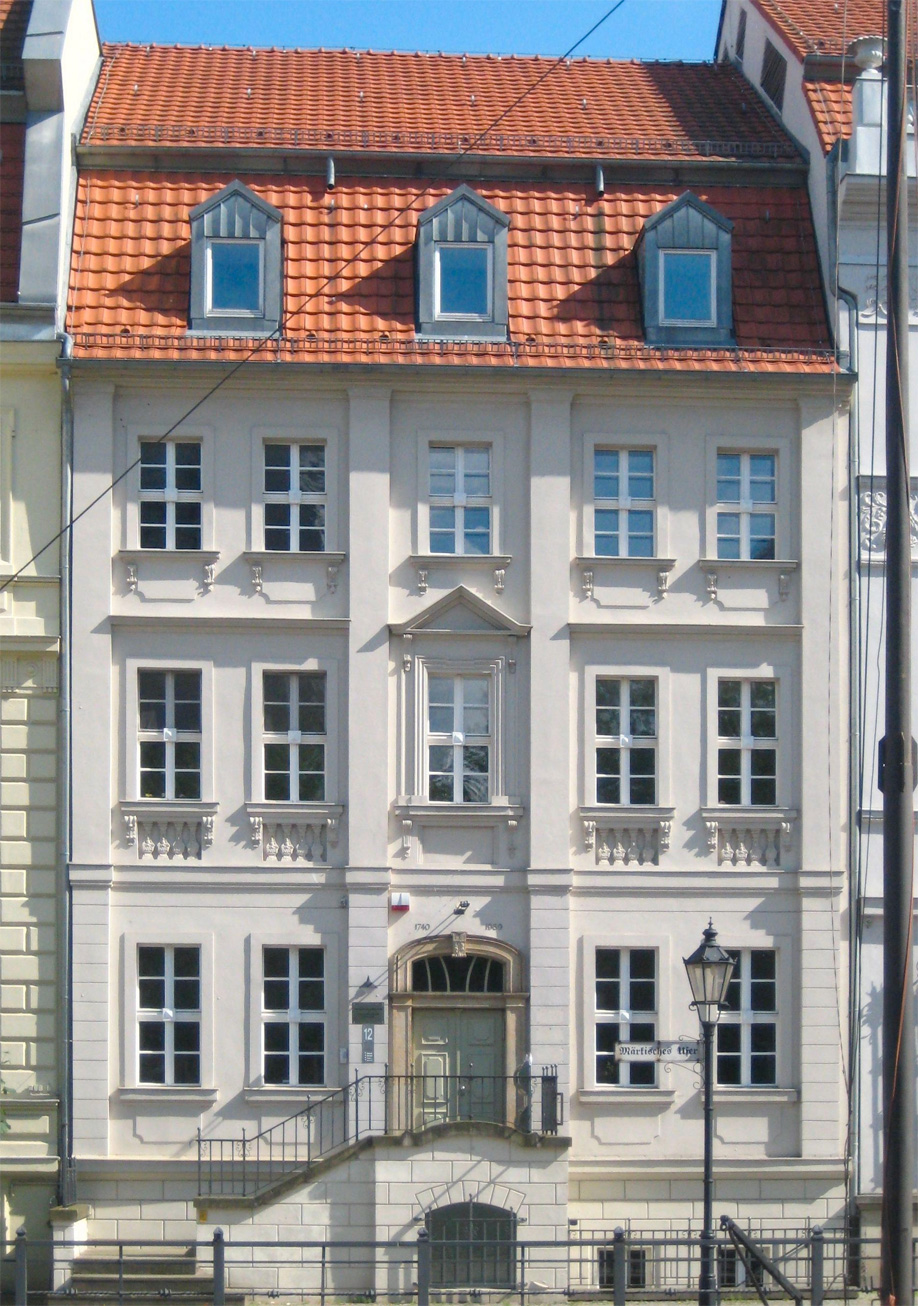 On the bank of the Spree canal, in one of Berlin’s priciest downtown neighbourhoods, sits a landmarked residential building from the 1700s. A brass plaque out front reads, “Haus Märkisches Ufer.” In 2015, the owners had planned to convert the building into an art gallery and, above it, a single 510-square-metre luxury apartment. But the firm they contracted, Dreigegeneinen, heard that the government was offering special funding for refugee housing projects, so it convinced the owners to abandon their original plan in favour of a refugee housing facility – a secondary space that migrants could move to after the initial registration period.

Because of the building’s landmarked status, the structure’s fundamentals had to remain untouched, so most of Dreigegeneinen’s design work went into creating liveable interior spaces. “Often, the government thinks we have to put only rough furniture in shelters because it will get destroyed,” says Bastian Sevilgen, a representative of the firm. “I don’t like this idea of making things really sturdy so people don’t break [them]. I thought, let’s just make it really nice so they will appreciate it.” The idea of Haus Märkisches Ufer was to provide up to 60 people with shelter in a permanent structure that felt more like a hotel than a camp. While the high visibility of temporary halls sometimes drew far-right attacks, neighbours around Dreigegeneinen’s lodging usually don’t know the inhabitants are refugees. Its spacious common room, meanwhile, is furnished with Frankfurt chairs – classic 1950s designs that Sevilgen associates with upscale restaurants.

Haus Märkisches Ufer is one example of the permanent buildings being used for post-emergency housing. Berlin’s Office of Refugee Affairs has also been building a series of modular concrete buildings – Modulare Unterkünfte für Flüchtlinge, or MUF – with an 80-year lifespan. In this secondary phase of government-provided housing, people have legal status that allows them to look for jobs and housing outside of the government system.

However, migrants usually end up staying in these halfway houses for longer than either they or government officials hope. As in so many global cities, the sale of Berlin’s government-owned social housing in the 1990s has resulted in an urban core habitable only by the rich. Germany’s housing stock doesn’t match the needs of low-income newcomers – especially those with large families – who need to be near economic opportunities that will allow them to integrate into the larger society.