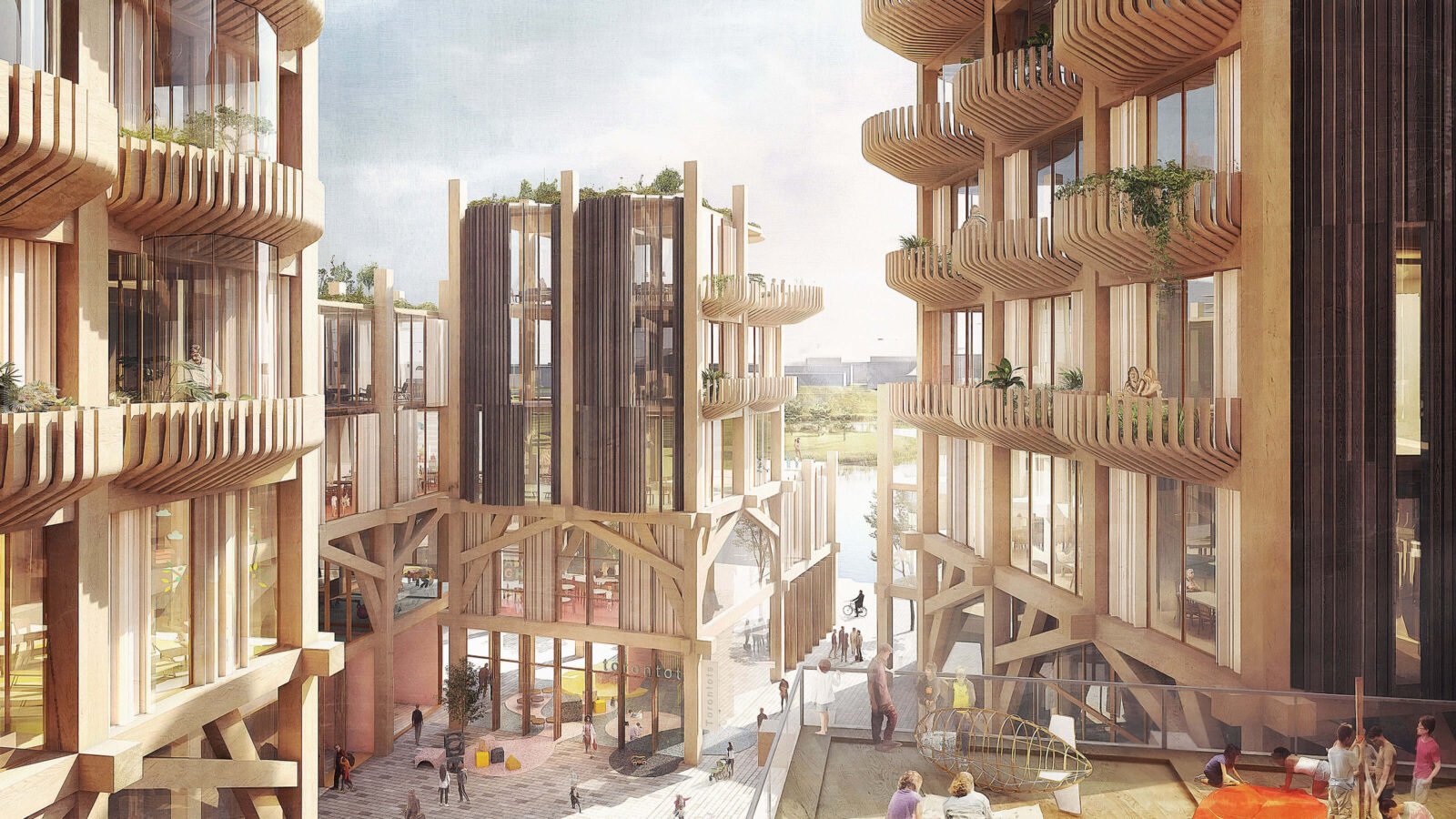 Last week, Diller Scofidio + Renfro unveiled its renderings for the University of Toronto’s School of Cities. It’s the latest in a series of ambitious architecture projects by international firms that will change the face of the city.

From Thomas Heatherwick’s expressive timber proposals for Sidewalk Toronto to Diller Scofidio + Renfro’s stacked-volume renderings of U of T’s School of Cities, we have lately seen numerous architectural visions for projects that will have major impacts on the city’s skyline and fabric. Here are 10 that we believe will really shape the future of the city – that is, if they are ultimately realized.

This shimmering yet hefty project has already got critics and proponents buzzing on social media. Situated at 90 Queen’s Park – site of the shuttered McLaughlin Planetarium – the building will be home to U of T’s new School of Cities, and also integrate eight other departments (from law to Islamic studies). It will also connect to its historic neighbours, including the Royal Ontario Museum, Flavelle House and Falconer Hall.

These relationships have informed the project’s appearance. Diller Scofidio + Renfro, the same firm behind New York’s High Line and The Shed, describes the building’s dual identity thusly: “a smooth cohesive block containing faculty offices and workspaces to the north expresses the unity of the building, while the individuality of each constituent department is revealed by an erosion of the facade to the south, which is shaped by an imprint of the historic Falconer Hall.”

The eroded southern facade carves into the nine-storey building’s blocky bulk, creating cantilevers and resulting in a textured massing. As the firm explained to Dezeen, the cladding materials were chosen to optimize this effect: “The northern facade is comprised of a fritted vision glass and metal panel that reads as fairly uniform in tonality to contrast to the stepped, eroded side of the building which features low reflective glass and aluminium.” Inside, a central atrium and stair links the lounge, study and meeting spaces. DS+R is working on the project in collaboration with local studio Architects Alliance (the project’s executive architect) and ERA Architects (its heritage consultant).

The city’s most polarizing development proposal by far, Sidewalk Toronto recently unveiled sketches of what the neighbourhood might look like should it be given the green light. Snøhetta and Thomas Heatherwick have envisioned buildings – a pair of high rises by the former and Google’s future Toronto HQ by the latter, among them – that transform hardy timber into a visually expressive material. As illustrated in Sidewalk Toronto’s February 2019 project update, the buildings feature fan-like balconies and balletic structural beams as if to say: this isn’t your typical wood architecture. Alongside these nascent developments, Sidewalk Toronto is planning to move forward with the unveiling of two scale prototypes of concepts first proposed in spring 2018: Carlo Ratti’s interactive roadscape and Partisans and RWDI’s building raincoats are being built onsite at their 307 building and will be unveiled early next month.

This project is close enough to Toronto – and sublime enough architecturally – for us to be very amped about it. Dublin’s Heneghan Peng Architects is working with Toronto firm Kearns Mancini Architects on the 7,500-square-metre, landscape-hugging building, which snakes along a canal in Peterborough, Ontario. On its completion, the new Canadian Canoe Museum will replace the museum’s current home in a warehouse-like structure and hold the world’s largest collection of canoes and kayaks. One of its greatest achievements will be a green roof nearly a hectare in size that will overlook the canal – a popular spot for recreation – as well as the historic lift locks that connect Lake Ontario to a network of smaller lakes, once crucial shipping routes serving Central Ontario. Read the full story here.

Another ambitious project by the University of Toronto, the 14-storey, 23,225-square-metre Innovation Centre will house U of T Entrepreneurship, the Innovations & Partnerships Office and the Vector Institute – an international leader in AI technology. Slated for the corner of College Street and University Avenue – where it will replace the western portion of the Banting and Best complex – the project will reside directly across the street from the MaRS Discovery District and its roster of innovative companies. Expected for a 2021 completion, the gently sloping tower designed by New York-based Weiss/Manfredi Architects in collaboration with Toronto’s Teeple Architects, will accommodate startup companies and established corporate partners. 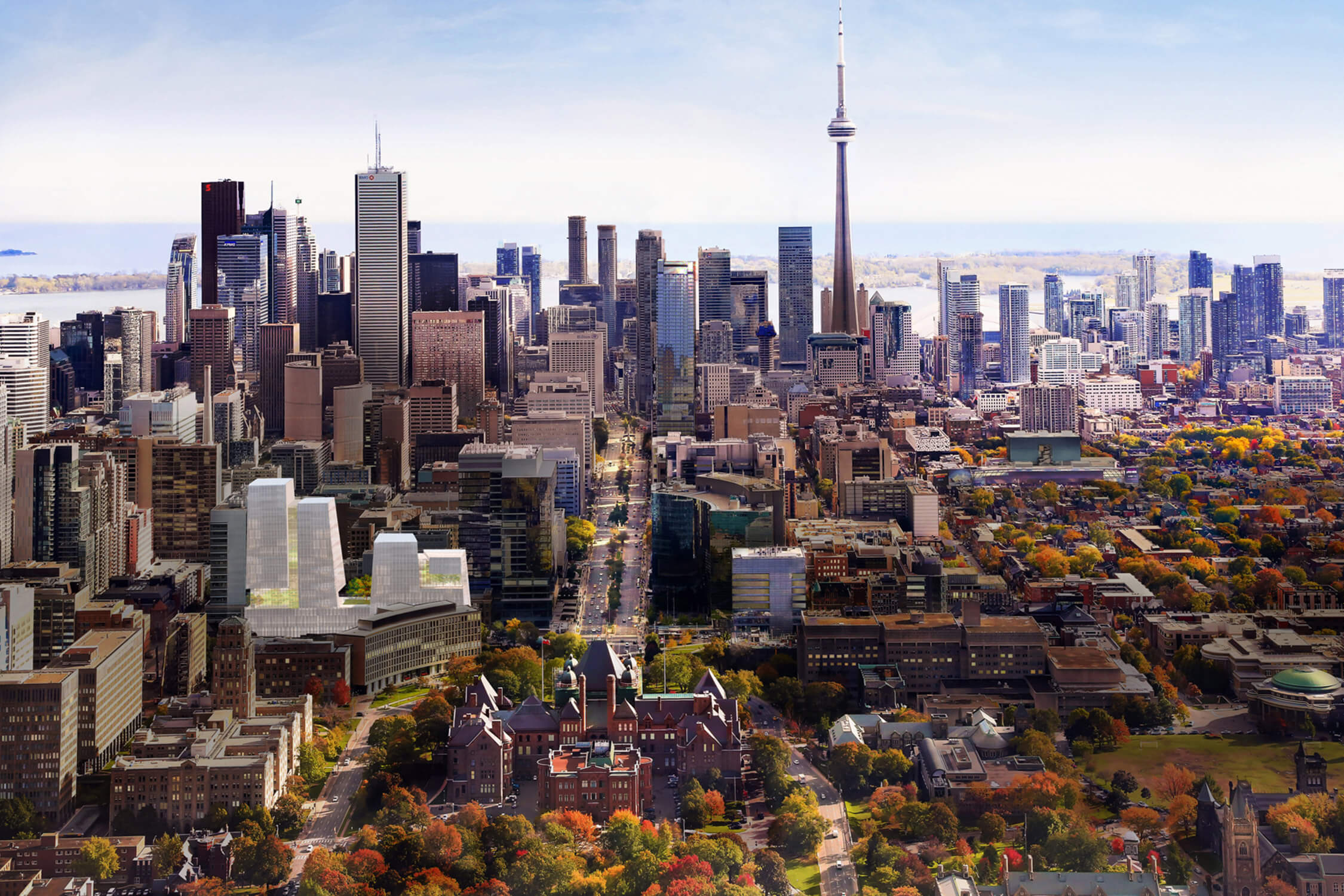 5
Jeanne Gang’s One Delisle tower at Yonge and St. Clair

Why so tall? That is the question often lobbed at a high-rise proposal. And Jeanne Gang heard it herself when she came to town last year to present her One Delisle tower proposal (a project of Studio Gang’s in collaboration with local firm WZMH) for Slate Developments. The gleaming-white, multi-faceted, cylindrical tower rises 48 storeys near the intersection of Yonge and St Clair to finally create a soaring landmark for this important-yet-non-descript intersection. But, in conversation with Azure, Gang expressed that by knitting the tower podium into the street’s preserved historic facades, the building’s height is rendered irrelevant. “The thing I notice is that this is the scale you perceive when you’re walking,” Gang said, referring to the sidewalk. “Whether the building is 50 stories or 60 stories or 30 stories, that isn’t something people really can perceive so much. Which is why it’s really important to keep this character.” Read the full story here.

When a number of local and international architects were invited to submit designs for Toronto’s two new waterfront parks, a wealth of wonderful ideas were put forth, from toboggan hills to modular green spaces. But we fell hard for Claude Cormier’s Love Park, described as a “green space with a pinch of whimsy.” (It was chosen for development alongside wHY Architecture and Brook McIllroy’s equally pleasing Rees Street Park concept.) Cormier, the designer behind Toronto’s dog- and cat-themed parks and Montreal’s 18 Shades of Gay, characterized Love Park – which zigzags trees and promenades around a 40-by-50-metre heart-shaped reflecting pool – as an “alter-ego” to its glassy surroundings. We can’t wait for it to be real.

Taking shape in Toronto’s Fashion District, 51 Camden is a hospitality project cut from a different cloth. In fact, it boasts a façade that feels more textured than most new developments in the downtown. That’s because the 13-storey, 130-unit brick and weathering steel building is by Shim Sutcliffe, the renowned Toronto architecture firm known for its attention to craft and detail. Which explains its swooped entrance, like a lifted veil that welcomes visitors in, and its massive exposed concrete columns. Shim Sutcliffe is best known – and best loved – for its seminal projects, like Integral House, Wong Dai Sin Temple, and the Sisters of Saint Joseph residence. With 51 Camden, more Torontonians will get a more immediate chance to experience the firm’s magic. Read more here.

One of the world’s most respected architects, Renzo Piano Building Workshop has unveiled designs for the new Toronto courthouse at 10 Armoury Street (in collaboration with NORR Architects & Engineers) . With a facade composed of layers of glass and embossed metallic back pans, the building will be elevated on columns; a public plaza on the ground level and a 20-metre-high atrium will be welcoming to passersby, making the building a modern, open and accessible symbol of the city’s civic precinct.

The building’s transparency will “create an immediate and strong image which will extend the public realm into the building, as well as expressing the public nature of the courthouse within the city,” the firm says. The new facility will provide a home for a number of law courts that are currently scattered across Toronto.

Another significant intersection will be transformed by a major development in the next few years. A key node of the LGBTQ community, the corner of Church and Wellesley is the site of a rental tower – that’s correct: apartments, not condos, although there’s no word yet on affordability. What is known is that the project is being designed by 3XN, one of Denmark’s, and the world’s, most innovative and sustainably minded firms. In fact, this is its first ever high-rise in North America (though it also designing another hotly anticipated Toronto project: The Waves at Bayside) and it seems to have gotten off on the right foot. 3XN consulted with the community before it even began sketches, and what has resulted from this process is game changing. 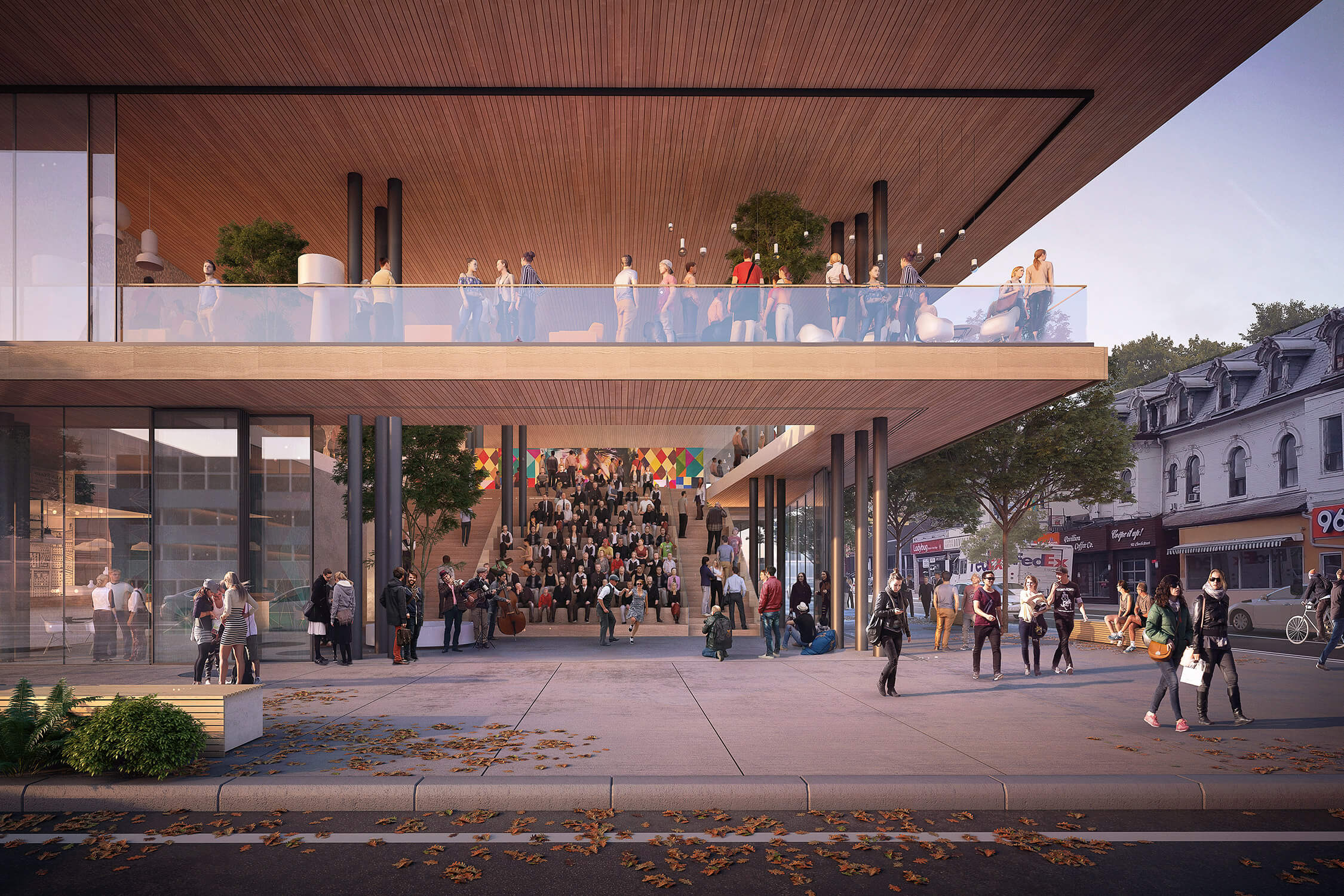 The proposed 43-storey, 153-metre-high building features a dual level plaza with retractable glazed walls for hosting community events, including for huge annual events like the Pride Parade. From there on up, the massing is broken up into four metal-clad segments of apartment units, staggered by terraces in between and stepped away progressively from the sidewalk. Read the full story here.

Morphosis will once again team up with Teeple – the two firms collaborated on U of T’s Graduate House, completed in 2000 – on this future project for OCAD University, which will also include a major contribution by Two Row Architect, a 100 per cent native-owned and operated firm. Two Row will lead on the creation of the Indigenous Visual Culture and Student Centre, which is but one aspect of the development’s scope. The project encompasses the renovating and repurposing of OCADU’s properties along McCaul Street as well as the addition of 5,110 square metres of new construction. Renderings have yet to be released, but we’re excited to learn more about this one.

Last week, Diller Scofidio + Renfro unveiled its renderings for the University of Toronto’s School of Cities. It’s the latest in a series of ambitious architecture projects by international firms that will change the face of the city.