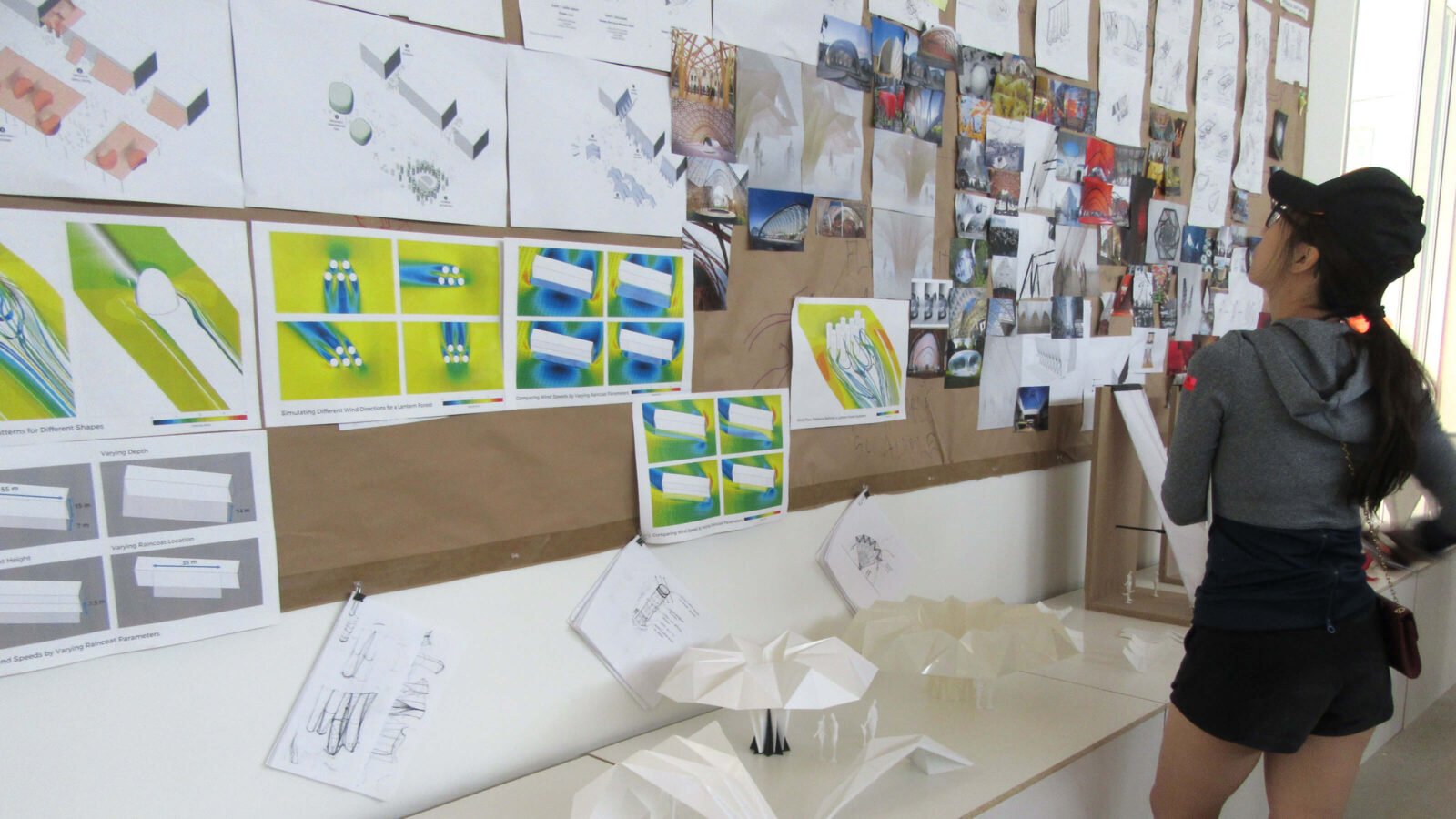 Dynamic streets, outdoor comfort zones, tall timber buildings, digital electricity and more. We stepped inside Sidewalk Labs’ newly opened prototyping space to find out what the future of Toronto’s most anticipated (and not quite green-lit) development might look like.

Since the announcement late last year that Sidewalk Labs would develop a proposal for a chunk of Toronto’s Port Lands, the Alphabet/Google entity has hosted many roundtables, panel discussions and info sessions. This community engagement has been a proactive way of showing the city and its residents how transparent its smart-city enterprise is and will be – and of assuaging concerns about how data will be collected and personal privacy protected – and emphasizing the importance of community feedback and collaboration. But concrete details were scarce about the still-tentative project (Sidewalk Labs has been invited by Waterfront Toronto to present a plan but the city will still need to green light it) and many have struggled to visualize what Toronto’s smart city on a 12-acre L-shaped chunk of waterfront property would look like. 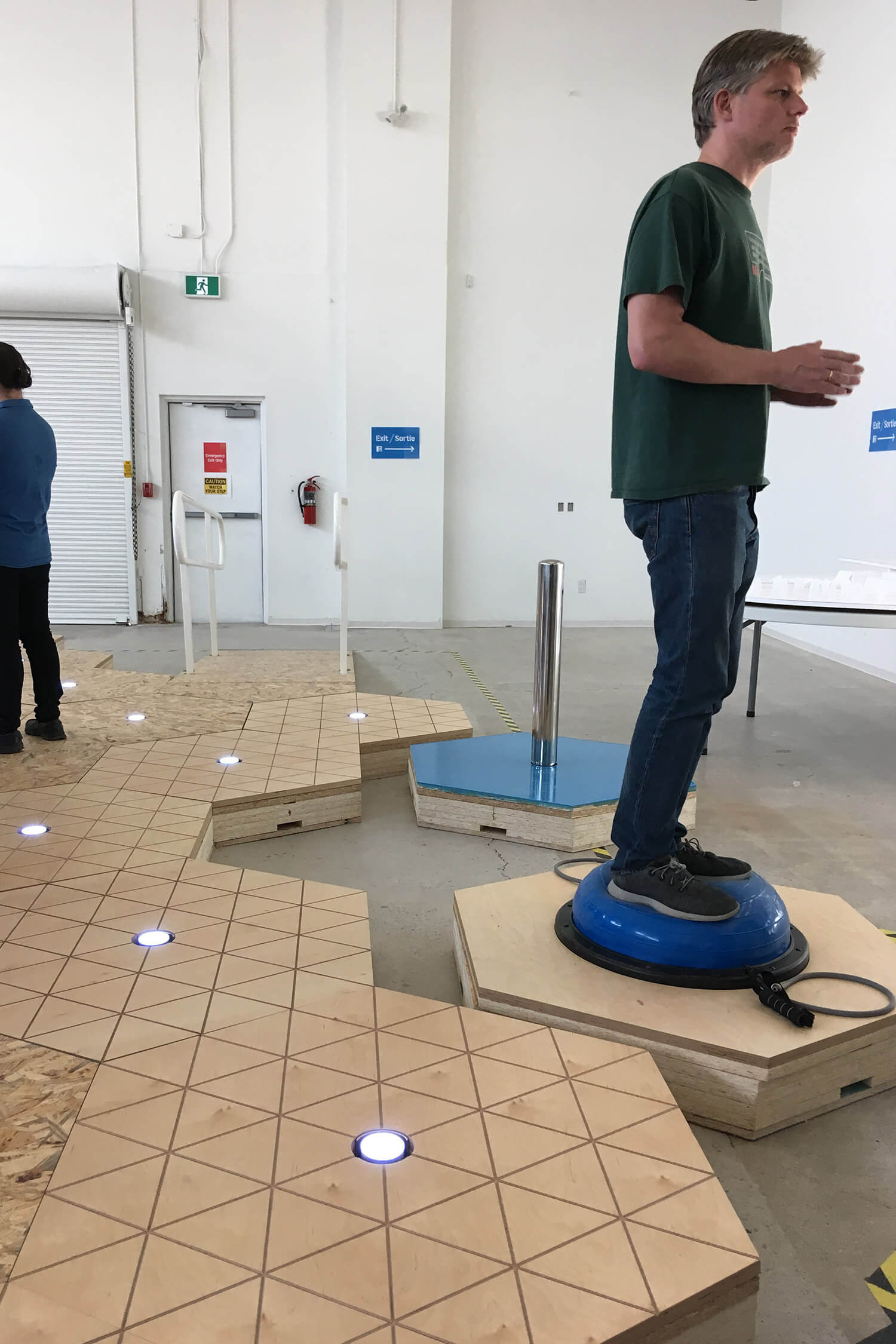 That changed this past weekend when Sidewalk Labs opened 307, its Lakeshore Blvd. E. hub, and shared with the public the tangible ideas it’s exploring in partnership with numerous architecture, planning, and technology firms. Some 2,000 locals dropped in to the space (designed by Lebel & Bouliane) to once again provide feedback, take in talks and participate in workshops; this time, they were also able to see and interact with physical prototypes of buildings, technologies and infrastructure.

Most prominent: a reconfigurable street platform made of hexagonal tiles with light sources at their centre. The idea is that in a future of (hopefully safer) autonomous vehicles, the lights can be programmed to efficiently redirect traffic and pedestrian flows. Sidewalk Labs invited Carlo Ratti Associati, the Turin-based firm run by MIT Senseable City Lab founder Carlo Ratti, to prototype the system in wood; its built-in dexterity allows for tiles to be popped out as needed for repair work, bollards to be screwed in, pavement finishes to be specified and more. 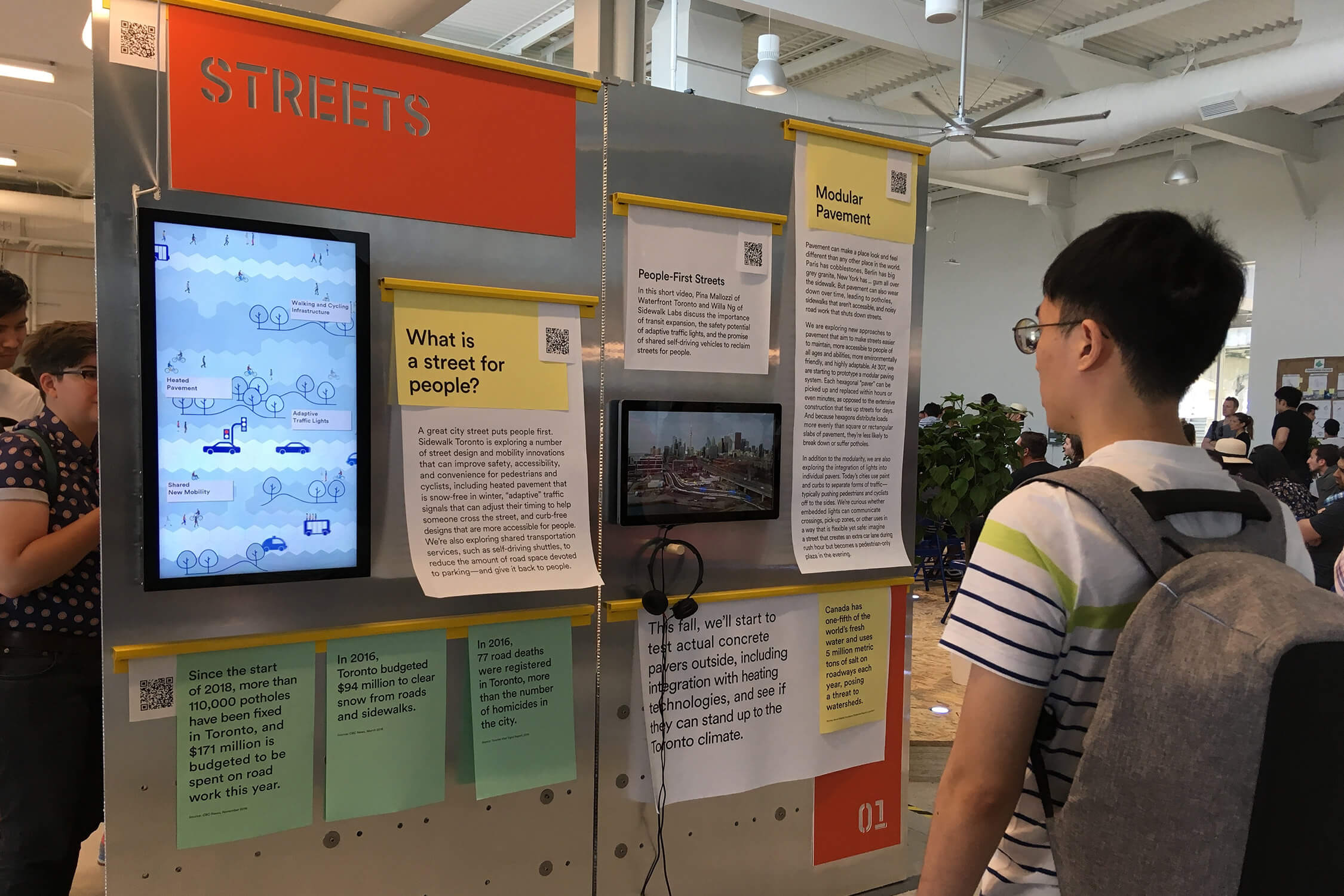 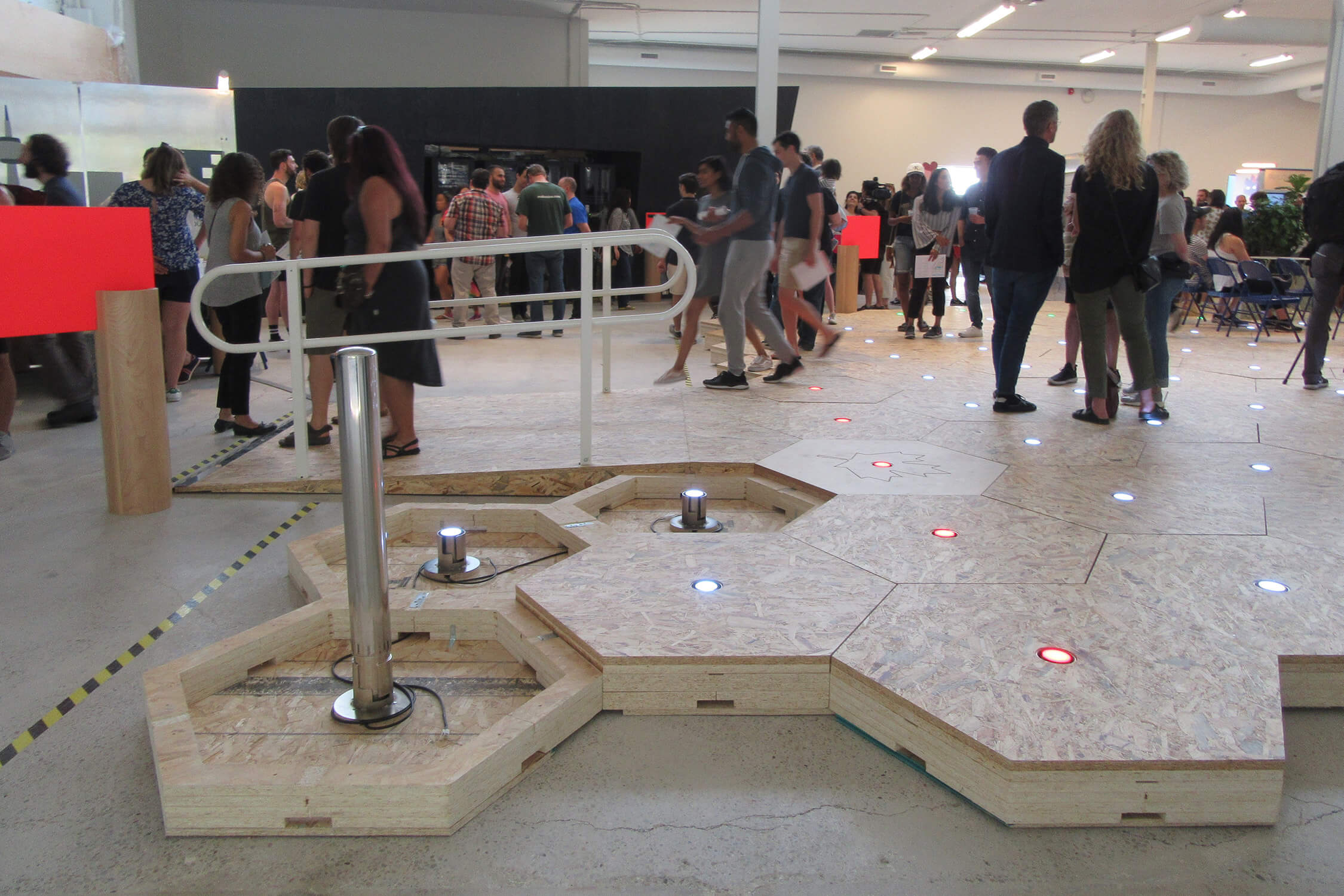 “With autonomous vehicles,” Ratti told Azure, “you can dynamically redefine the road – according to if you need one lane, two lanes, et cetera. Autonomous vehicles will also change the amount of parking we will need. So it seems very important to create a platform that can allow flexibility that benefits citizens, who can see how technology evolves and adjust to different conditions.”

The dynamic street, partly inspired by a pilot project underway in France, will take fuller shape when Sidewalk builds a heated-concrete version to scale on its site this fall. “Sidewalk has an internal mobility and public realm team that has been doing design and has been thinking about streets for years,” explained Jesse Shapins, director of 307 and lead of Sidewalk Labs’ public realm team. “This is about bringing that thinking together with the work that Carlo and his team have been doing in order to then prototype those ideas. I love Carlo’s kind of thinking – the emphasis on people and not just how new technology on its own can make great cities. You actually create an experience of people first.” 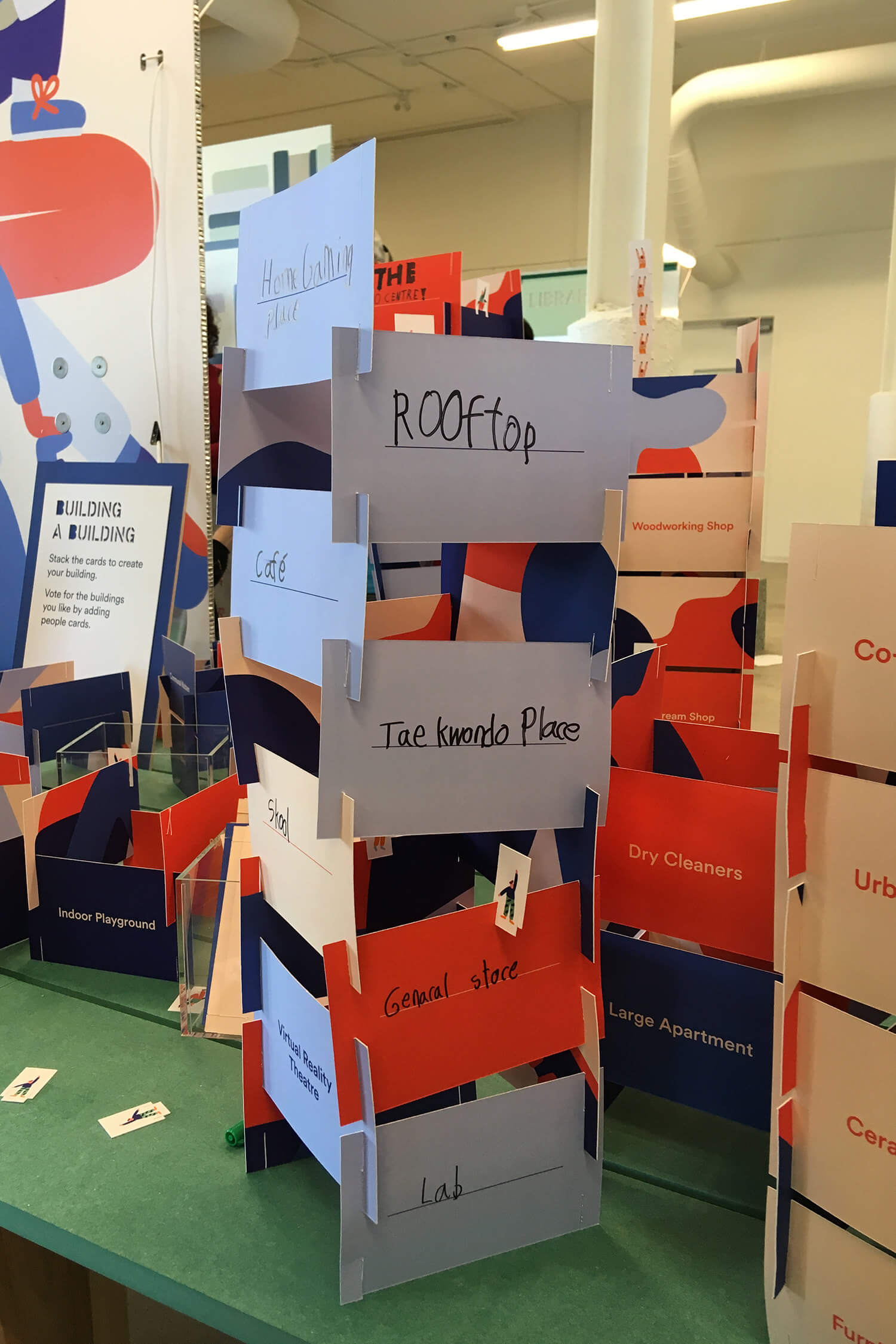 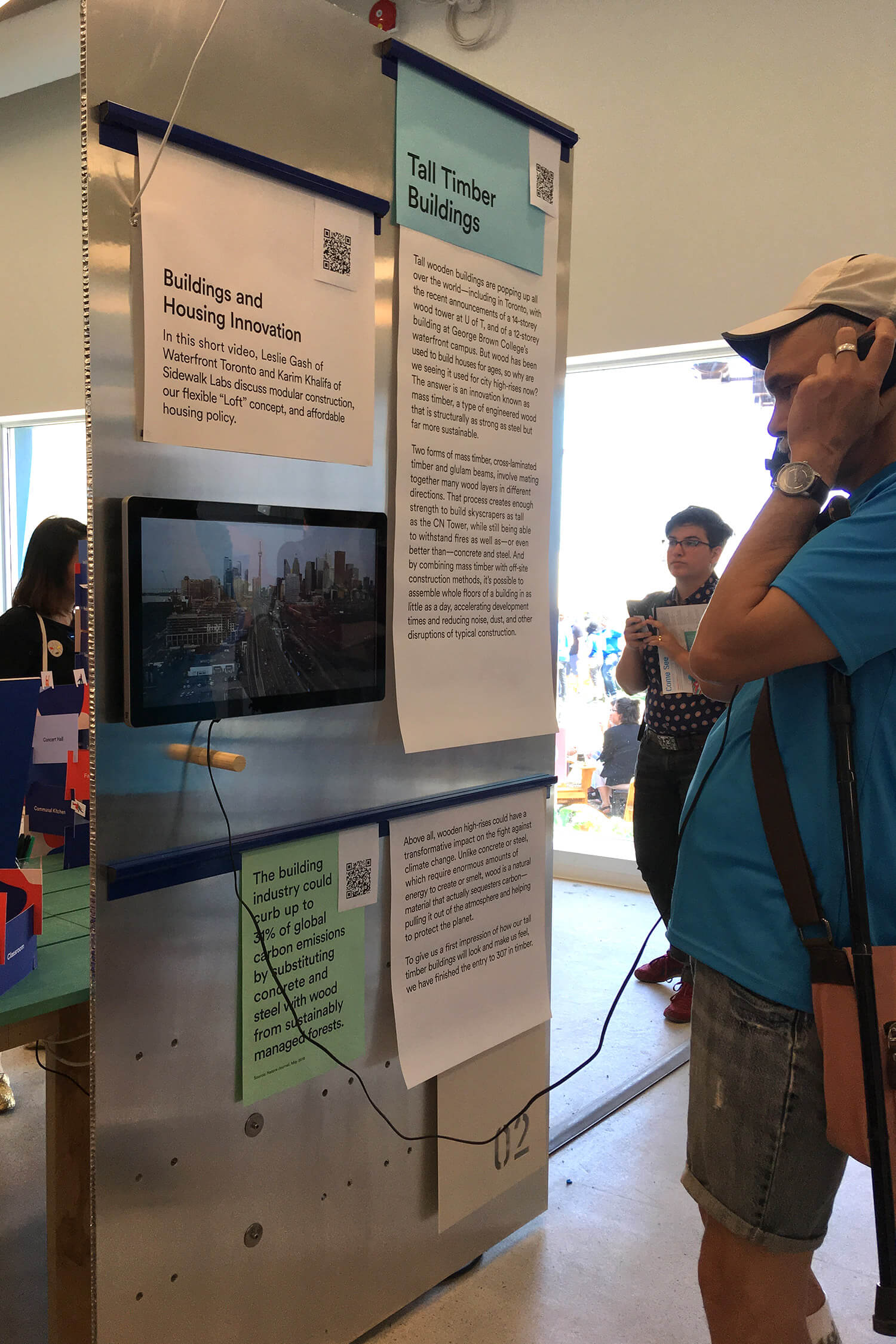 Where will people gather in Sidewalk Toronto? Saturday’s open house offered a possible answer to that question with a presentation by architecture firm Partisans and the engineers at RWDI. They are testing out a series of outdoor comfort zones also to be prototyped as 1:1 mockups in fall/winter. The team has performed weather pattern analyses and built a number of evocative prototypes that balance the need for outdoor shelter with the desire for openness, flexibility and a healthy dose of formal audacity. 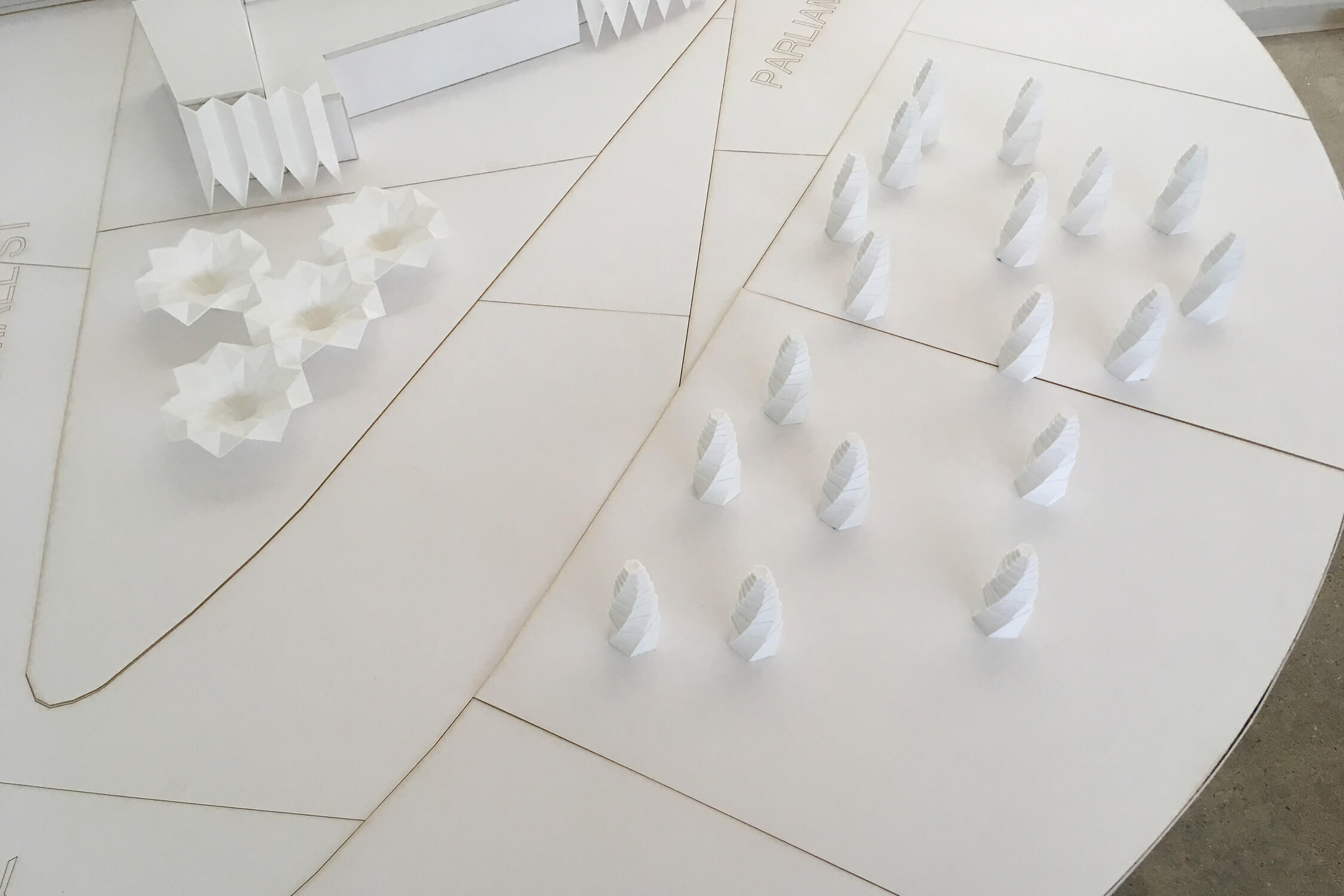 “What Sidewalk has recognized is that most Torontonians feel the city is not comfortable most of the time,” says Partisans co-founder Alexander Josephson. “The city’s architecture hasn’t taken into account the realities of our extreme climate.” In response to the frigid winter/oppressive summer temperature differential, and informed by the dynamic structures of Buckminster Fuller, Frei Otto and other visionaries, the firm and RWDI have created a series of “outdoor comfort zone” models – hexagonal forests and origami shells with inflatable skins that Josephson calls “inflatigami” – conceived as kinetic and adaptable to address the shoulder seasons. In essence, they’re comfortable public spaces that also promise to provide unexpected and delightful architectural moments. 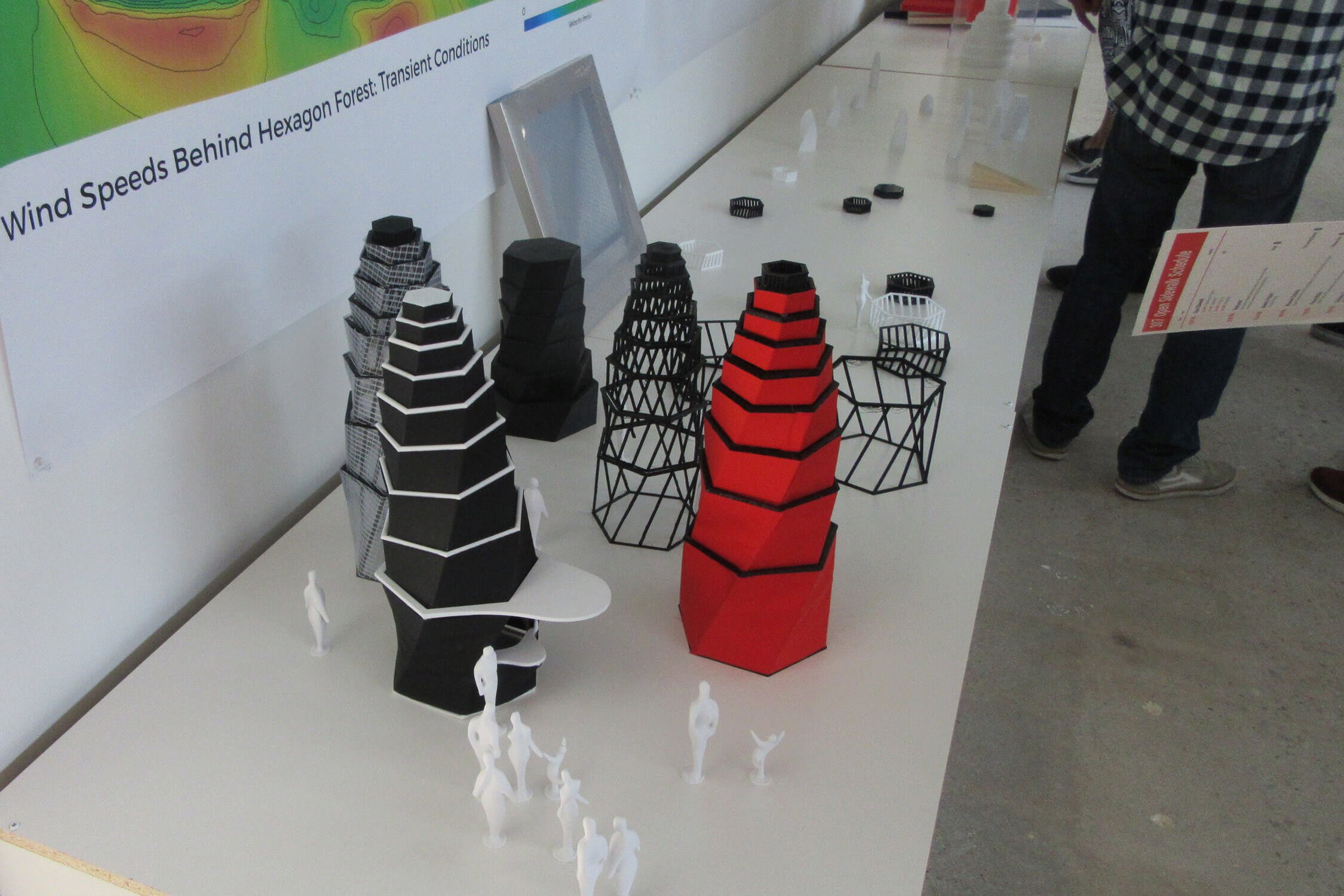 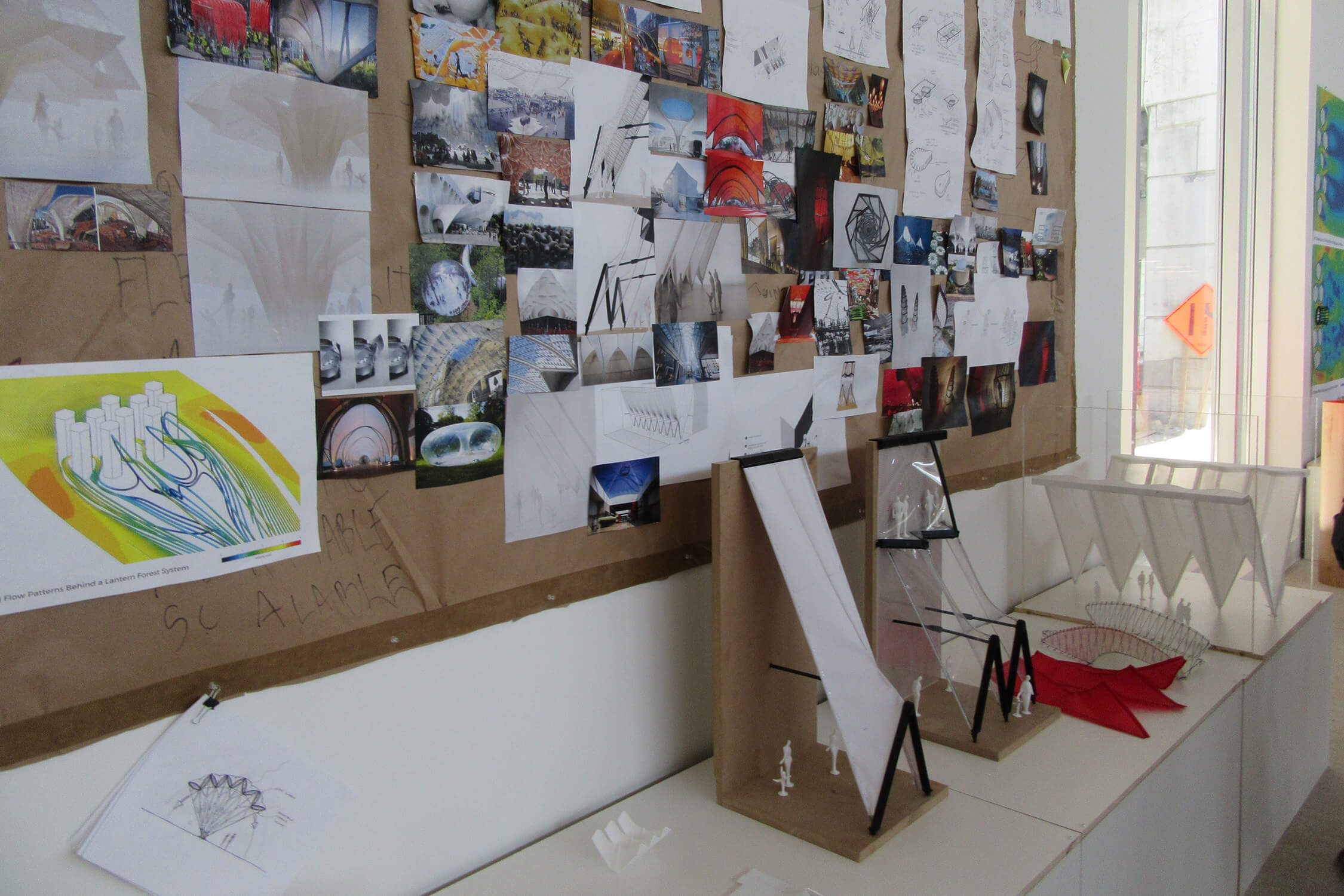 Everywhere you looked, the 307 open sidewalk was replete with great city-building ideas. It satisfied a preliminary checklist of everything that we believe urban centres need: One of the interactive tools visitors could experience was a generative design game, created in collaboration with Montreal’s Daily tous les jours (best known for having designed the musical swings in that city’s Quartier des Spectacles) and New York’s KPFui. It allowed people to visualize how radically a neighbourhood morphs when we toggle for increased density, different street grids, more trees and so on.

But there were also a few surprises, such as a digital electricity generator that is being used to power 307’s Big Ass Fans, and that might be considered as an energy source for the tall timber buildings that might one day populate the smart city. But perhaps the biggest innovative concept of all is that of the endless feedback loop. Not only is Sidewalk engaging the community at the planning stage, but it’s hoping to build the kind of flexible neighbourhood that could be adjusted to citizens’ needs and aspirations even after everything is in place. 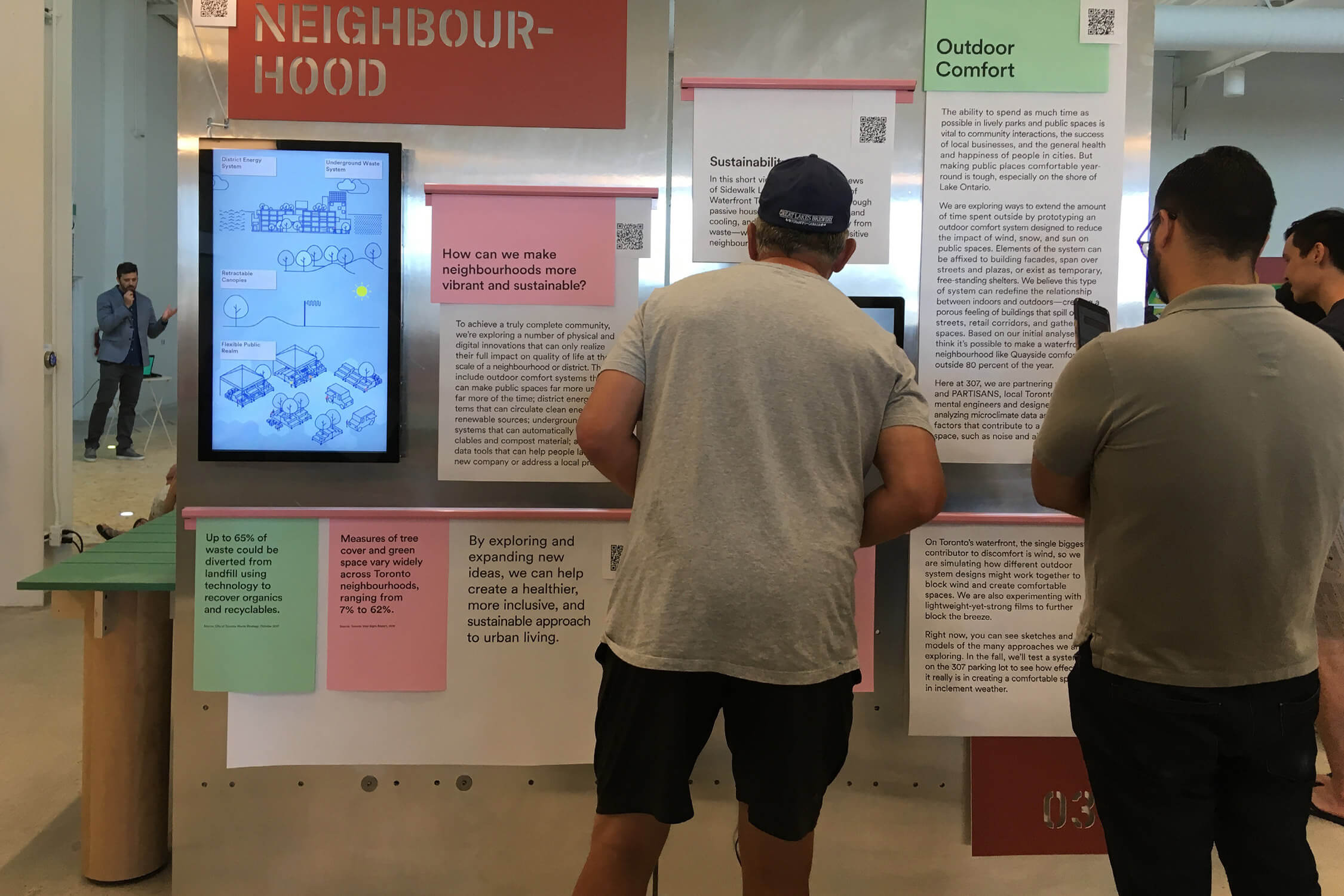 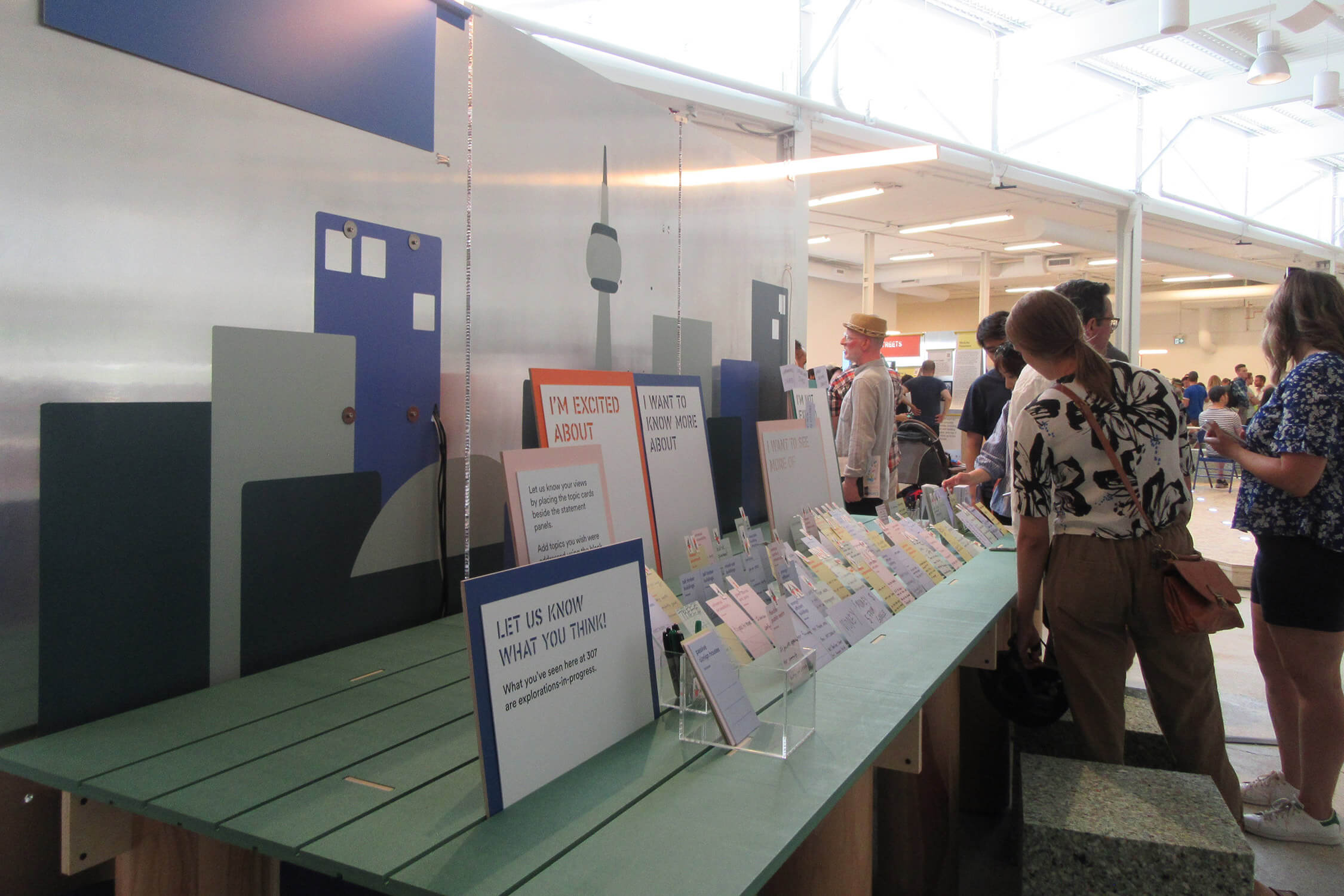 This is a departure from the planned cities of the past, from Chandigarh and Brasilia to the latest desert-city-from-scratch. While Ratti is so far only a small part of the 307 “explorations-in-progress” phase – he’s excited about Sidewalk Toronto but was only recently called on to create the dynamic street prototype – his is the perspective of a major disruptor and future-city creator who is also fully aware of the need for transparency around privacy issues. He told Azure, “Usually what fails is when a city is such a complex system, one where you try to design everything and then just implement it. The important thing is, how do you create feedback loops so you build something, you get feedback from users in the community, and you can change it? You need to build a flexibility.”

Sidewalk plans to host its “open sidewalk” series, with a changing program of design explorations and collaborations, on a monthly basis.

Dynamic streets, outdoor comfort zones, tall timber buildings, digital electricity and more. We stepped inside Sidewalk Labs’ newly opened prototyping space to find out what the future of Toronto’s most anticipated (and not quite green-lit) development might look like.