Whimsical Berczy Park Makes a Splash in Toronto
The revitalized Berczy Park is a whimsical precedent for a new Toronto, with more welcoming - and more memorable - public spaces. 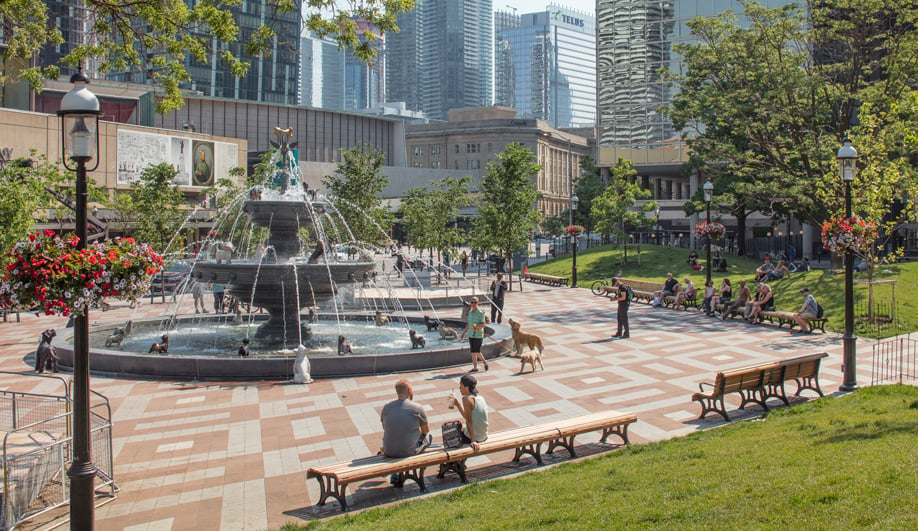 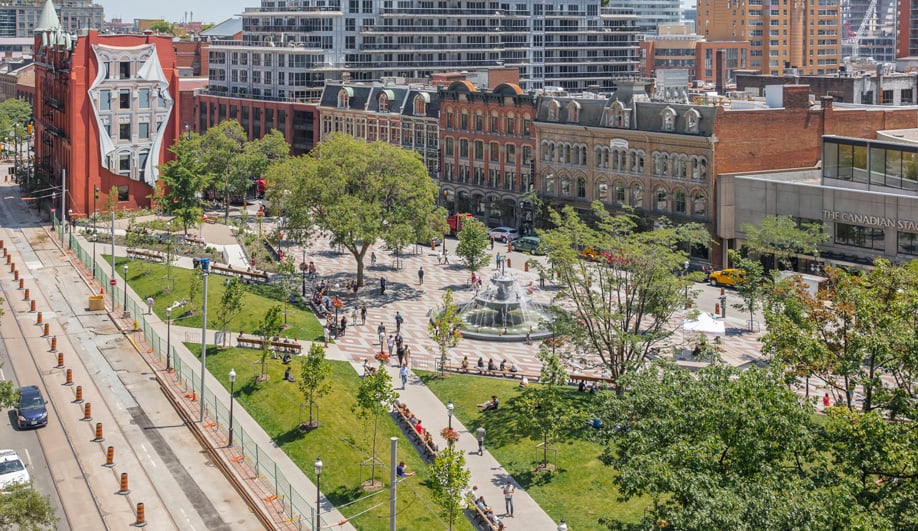 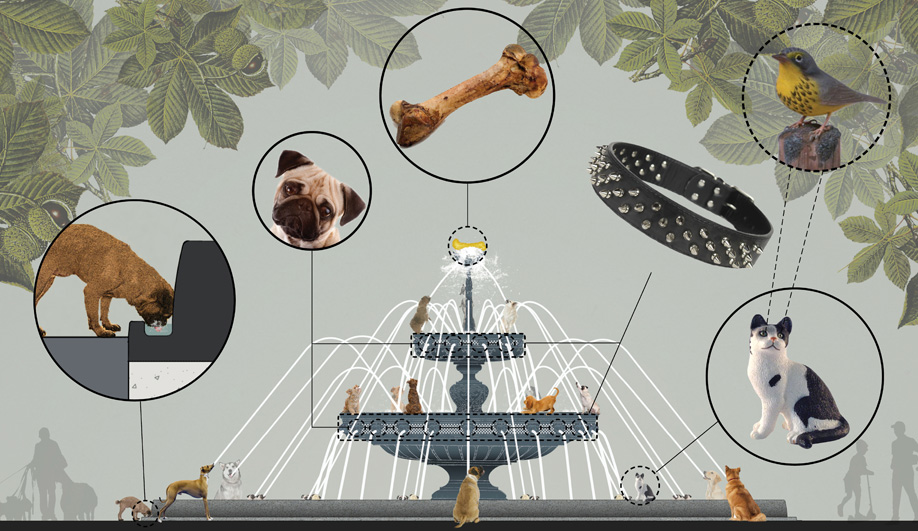 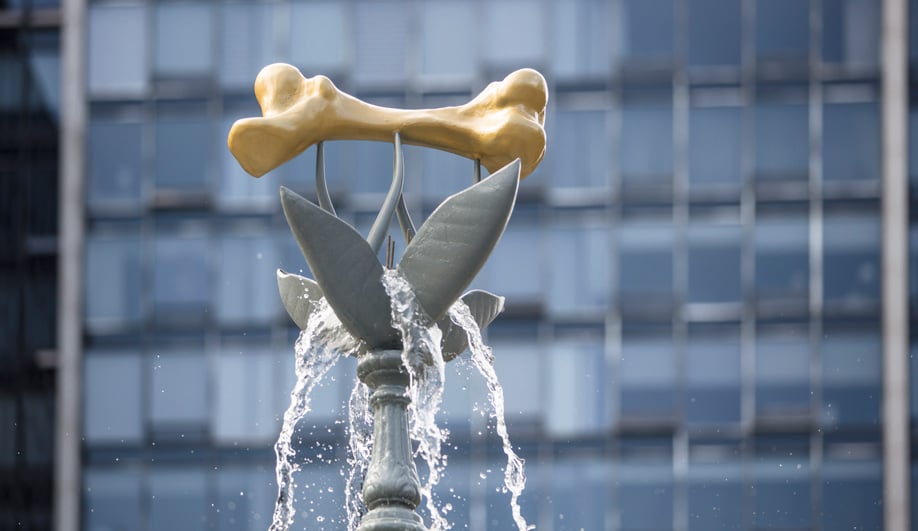 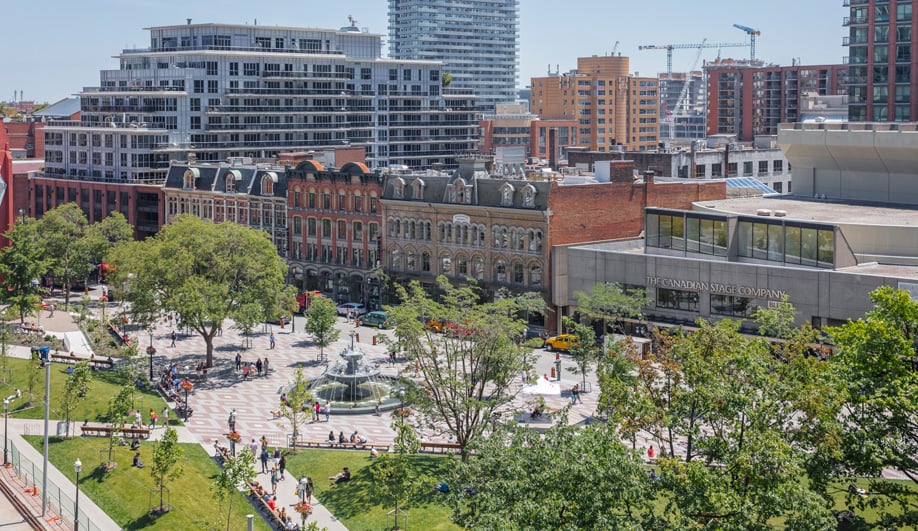 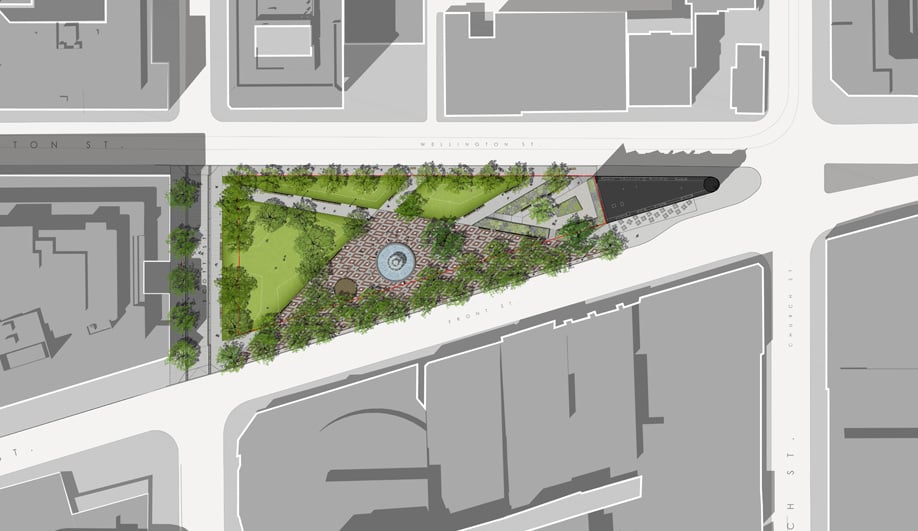 So far, it’s been all about the dogs. Toronto has been buzzing about a whimsical new fountain in the revitalized Berczy Park, just east of the downtown financial district, that features sculptures of dogs spouting water as they gaze at a golden bone at the monument’s apex. 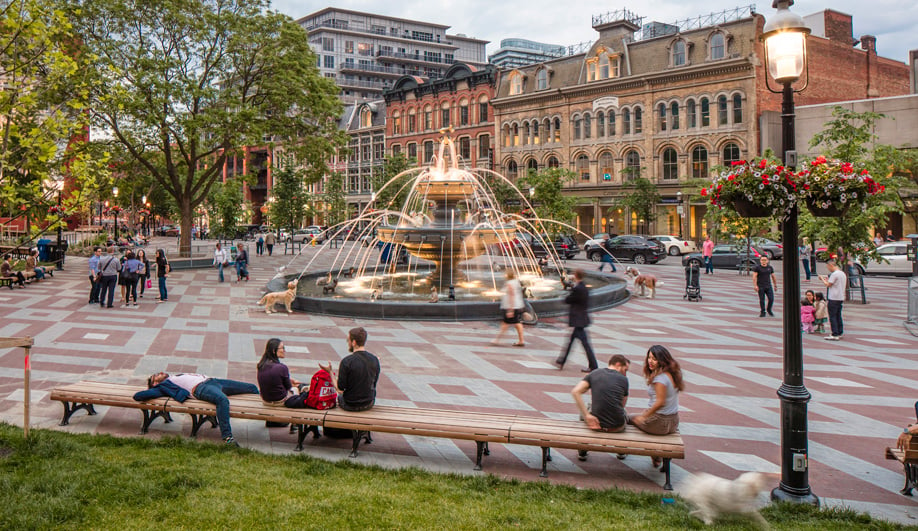 But there’s a lot more to the new park – designed by Montreal landscape architect Claude Cormier – than just the attention-grabbing fountain. It also explores some innovative solutions for small urban parks that have to serve many different users. The park sits on a small triangular block, with the tip of the wedge occupied by an iconic heritage Flatiron building, once the headquarters of distillers Gooderham & Worts. The triangle’s body is formed by the park, with the base provided by Scott Street. 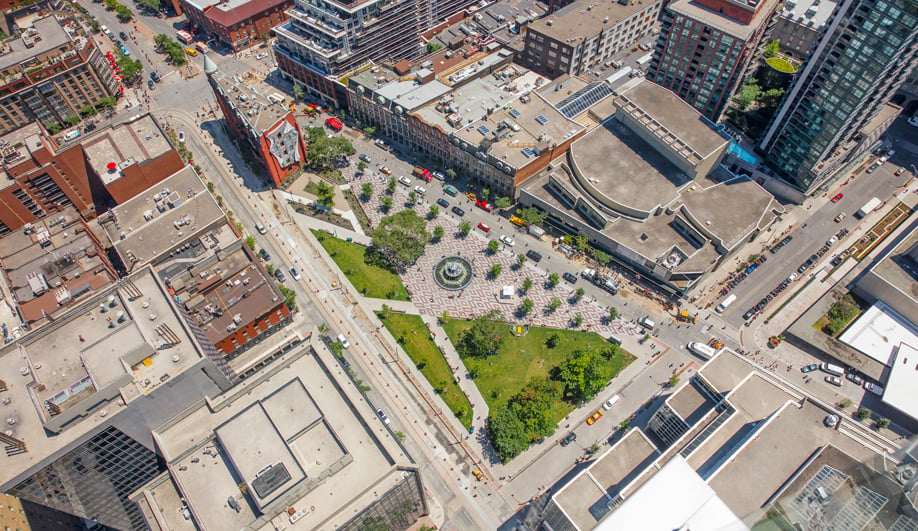 In an unusual move for normally by-the-book Toronto, this little side street has been transformed into a flexible thoroughfare – one that becomes an extension of the park when desired. A flattened curb and specially designed paving stones allow the park, sidewalk, and street to blend (continuous tactile markings and bollards help define the sidewalk for safety and accessibility when the street is open to traffic). It’s a creative way of making the small park feel more spacious, while enabling it to expand for events or to accommodate food trucks or vendor stalls. Along with nearby Market Street, where a parking lane has been reconfigured to make room for restaurant patios in summer, Scott Street marks a start towards reimagining Toronto streets as more than just venues for moving vehicles.

The revitalized park is a sign of many big changes happening in the city. Its previous incarnation was an unremarkable green space, used mostly by lunching office workers. But in recent years there’s been a rapid increase in neighbourhood population, as condo towers shoot up all around. And these new residents bring with them dogs and children, neither of whom found their needs met by the park’s previous incarnation. 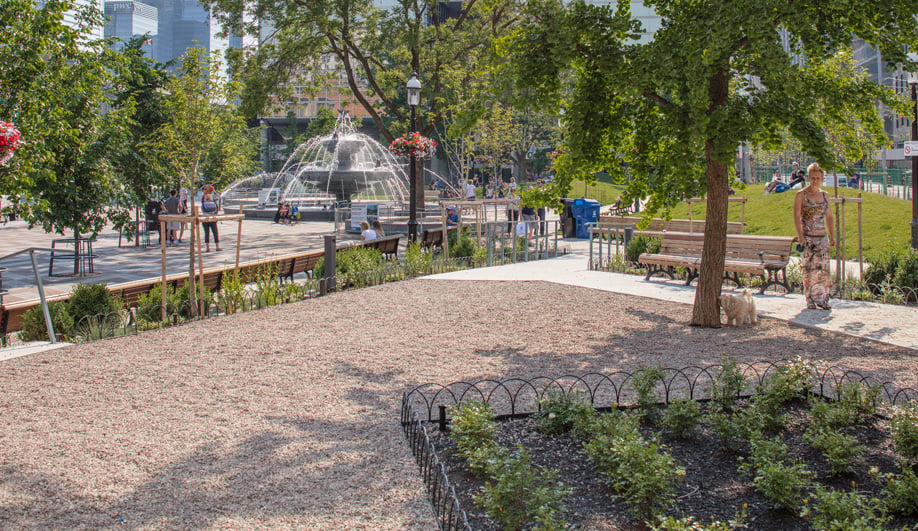 In this small footprint, there isn’t room for a separate a off-leash dog run or playground, so Cormier created spaces for pets and kids without cordoning them. An elevated area has been designed with (on-leash) dogs in mind, with a gravel surface where they can do their business without impacting plants; small fences cue owners not to let Fido roam through flowerbeds. Elsewhere, a soon-to-be-installed piece of art will do double-duty as a children’s play structure.

In another innovation, shade trees in the park have been planted using “silva cells”, usually used for street trees, that ensure their roots have room to grow. Rolling hills, a plaza area, a stage, and an abundance and variety of seating (benches, hillsides, fountain-side, plus a platform around a tree) create multi-functional spaces for all kinds of users and uses. 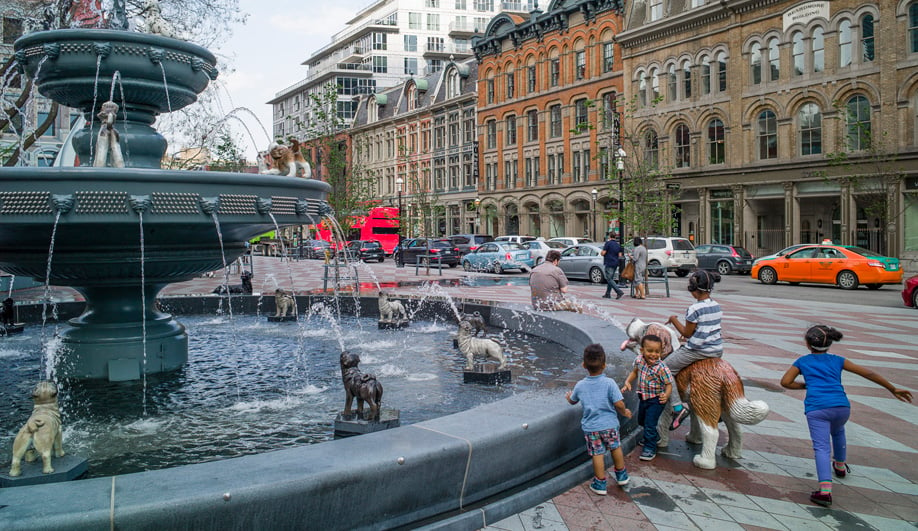 But let’s get back to the dogs. The playfulness of the fountain is itself a sign of a new Toronto. The artworks in the city’s public spaces have tended towards being either generically corporate or serious and earnest, which some might say is a fair reflection of the spirit of the city. But in the last few years, perhaps in a sign of newfound confidence, some public installations have taken on a more colourful tone, for example in the large illuminated “Toronto” sign in front of City Hall (intended as temporary but made permanent by popular demand), a blossoming culture of official street art murals, and the pink umbrellas and beach-on-the-land of Sugar Beach Park, also conceived by Cormier. 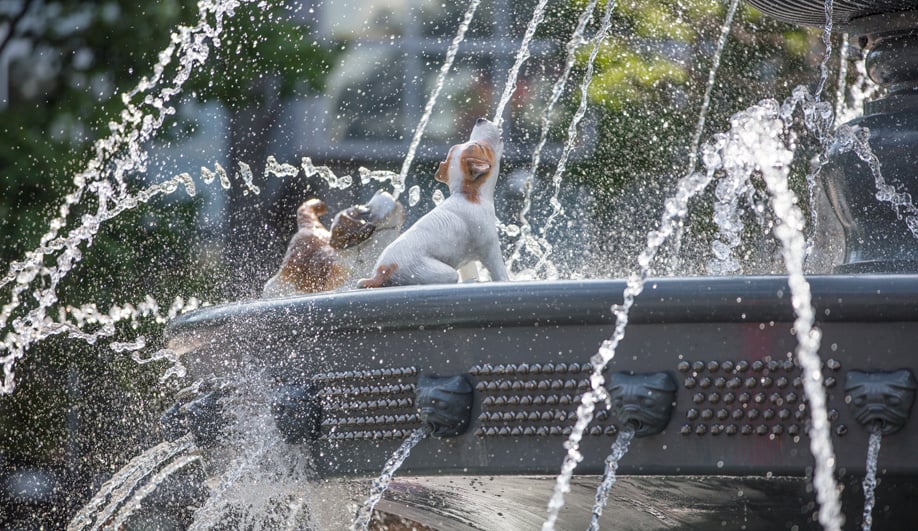 Playful as they are, these designs can also fulfill a useful purpose, giving a sense of place to largely new communities, built in areas that previously lacked definition. Their memorable character creates an identity to anchor new neighbourhoods, in a way that more earnest artworks might not. In Berczy Park, Cormier’s fountain joins one of the rare whimsical public artworks from an earlier period, a trompe-l’oeil of a building facade on the blank rear of the Flatiron building, which is one element of the old park that remains. 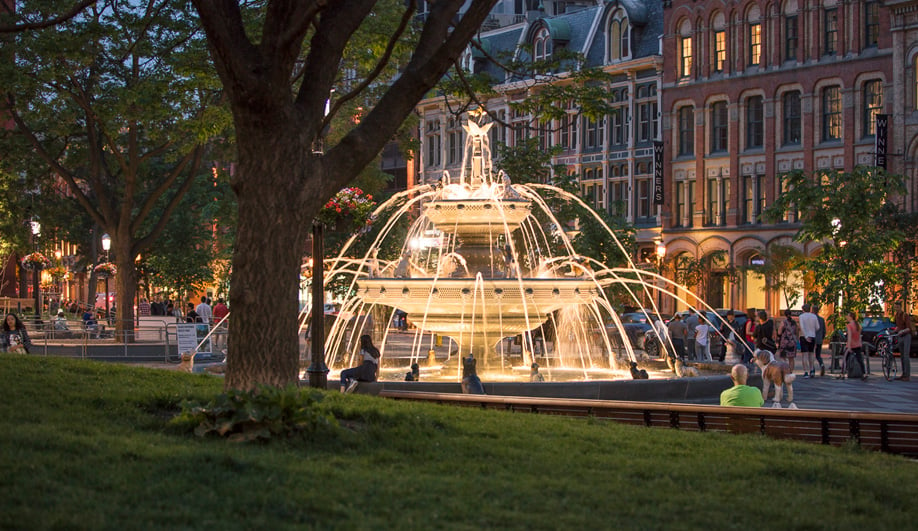 If it works as intended, Berczy Park will be a precursor to future Toronto parks. As Jake Tobin Garrett of the advocacy organization Park People says, the park is “a good test case for how to design small spaces that need to be heavily used.” As the city’s downtown intensifies and space is at a premium, the many innovations of this project will provide tools for subsequent public spaces. In the meantime, Berczy Park’s playful formality looks like it will successfully delight children, dogs and adults long into the future.