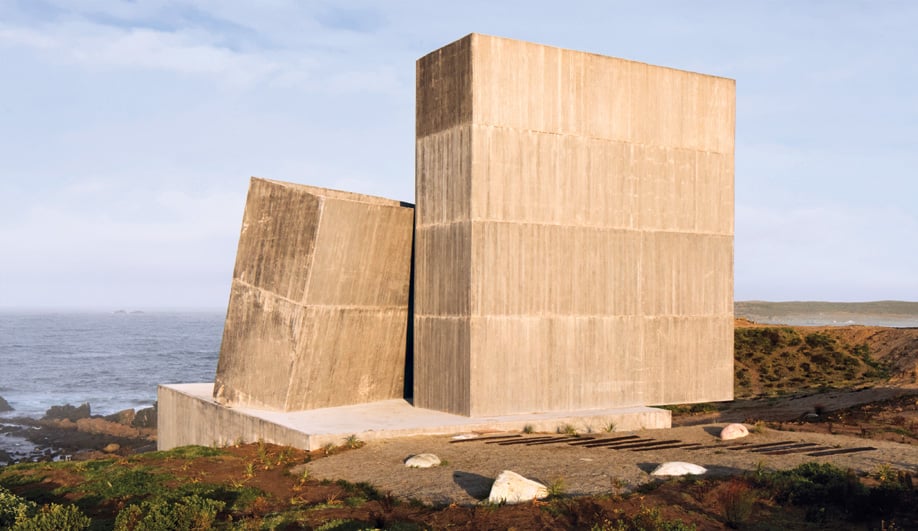 Given creative freedom but a limited budget, Chile’s Alejandro Aravena reconceives the beach house with a pair of primitive monoliths as rugged and austere as their seaside perch.

Given creative freedom but a limited budget, Chile’s Alejandro Aravena reconceives the beach house with a pair of primitive monoliths as rugged and austere as their seaside perch

The two slabs of shuttered concrete rising from a podium on a rocky stretch of Chile’s coastline some 250 kilometres north of Santiago are acutely enigmatic – at least initially. Are they a memorial of some kind, perhaps to mariners lost at sea? Or to the victims of an earthquake in this seismically unstable land? In fact, they comprise a weekend house designed by Alejandro Aravena, the first of 16 such residences a developer has commissioned from eight Chilean architects and eight from Japan. Like the Sea Ranch community in northern California, where designers also took their cues from a rugged coastal site, the so-called Ocho Quebradas development is not for timid souls. As Aravena notes, “the Pacific is not pacific here; the water is white from its collision with the rocks, and the winds are often ferocious.”

Aravena is best-known for designing housing for low-income families, who are given a sturdy shell that is half filled in and ready to be built out as the occupants are able to afford improvements. He calls his practice Elemental and that’s an apt description of his work, which won him the Pritzker Prize in 2016. He accepted the challenge of Ocho Quebradas (which means “eight ravines” in Spanish) because the developer gave him a free hand (provided that Aravena stay within the program: four bedrooms, living spaces, a wine cellar) and a budget of US$500,000. “We decided to push the limit of what is thought of as a house,” the architect explains. “A scarcity of means forces you to respond with an abundance of meaning. With social housing you are forced to eliminate the inessential; here we have chosen to do so.”

The gap between a tilting concrete volume and its taller upright partner serves as the gateway to the Ocho Quebradas beach house designed by Alejandro Aravena.

Access into the podium that houses the living areas, the master bedroom and a glass-enclosed firepit is via a concrete spiral staircase.

Concrete has supplanted wood as a favourite building material in Chile. It’s inexpensive, durable, resistant to earthquakes and provides a thermal mass. Aravena uses it here with rare expressiveness, confident that his house will last for centuries and never look dated. There are no finishes to maintain: Glazing is set into the board-formed concrete to frame vistas of the ocean from the living areas and master bedroom in the podium and from the windows of three bedrooms in the tower. The drama of the monoliths – the smaller one tilted against the upright tower – acquires added significance within the podium, where glass sliders surround an inner courtyard that contains a circular firepit partially sheltered by the tilted block. There, protected from the area’s strong winds, people can gather around the flames, as if around a campfire or at a cook-out on the beach. The tilted volume essentially serves as a chimney.

The terrace atop the beach house’s three-storey tower offers expansive ocean views.
We decided to push the limit of what is thought of as a house.
Alejandro Aravena

Located at the oceanside end of the podium, the master bedroom overlooks the Pacific through floor-to-ceiling windows.

“Rather than extend the house into the landscape, we compressed the core to express something primitive, as though this were a ravine or a cave,” says Aravena. There are roof terraces for fine days, but this is a house that can be used year-round; the podium provides everything occupants might need, so the tower containing the three extra bedrooms can be closed off as required. Elements that at first might seem like follies turn out, in other words, to be highly pragmatic.

Since it contains only extra bedrooms, the tower portion of the structure can be closed off as required. Aravena designed the home for year-round use.

At the same time, the house challenges the development’s other architects to create an innovative and harmonious community. Sea Ranch was launched in a spirit of optimism with MLTW’s dark wood condo block and houses by Joseph Esherick and William Turnbull Jr. These buildings, shaped by climate and topography, had an iconic quality that drew on the rural vernacular. But Sea Ranch has become more conventional and suburban in character over the past four decades. Some of Japan’s best architects – including Ryue Nishizawa, Kazuyo Sejima, Kengo Kuma and Sou Fujimoto – have been invited to contribute to Ocho Quebradas, along with Cristián Undurraga, Izquierdo Lehmann and other talented Chileans. One hopes that they will use their creative freedom to complement the site as successfully as Elemental has done. It’ll be a tough act to top.

Given creative freedom but a limited budget, Chile’s Alejandro Aravena reconceives the beach house with a pair of primitive monoliths as rugged and austere as their seaside perch.