Jan Kath’s Global Frontiers Push a Contemporary Carpet Revival
As Jan Kath's eclectic designs show, rugs do have a place in contemporary interiors – if they speak a contemporary language. 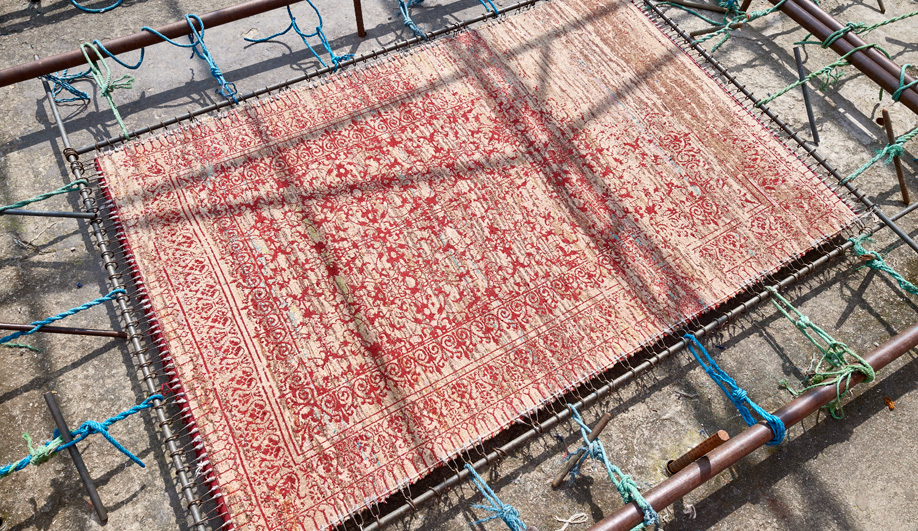 It’s the end of monsoon season in Nepal and the road leading to Jan Kath’s rug-making facility on the outskirts of Kathmandu bears the bruises of heavy rains. Marred by jagged rocks and knee-deep pits of mud, the city’s roads are constantly claiming tires. I notice with some alarm that the low stone bridge we’re crossing looks partially collapsed, but as Kath nudges his 4×4 around a pair of cows blocking the road, he exudes a Zen-like calm. He grew up in Germany, but he learned to drive in Kathmandu, he tells me. Everywhere else on earth is easy by comparison. 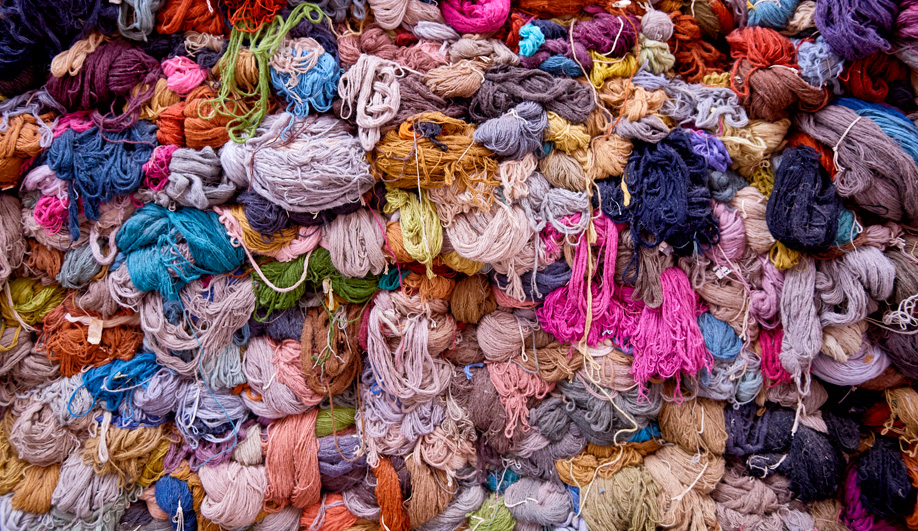 Before the weaving process begins, wool is carded to blend the fibres.

Passing through the factory gates into the central courtyard, I see a woman sitting to one side combining skeins of wool, silk and nettle thread into brightly coloured balls; behind her is a row of workers’ living quarters, and around the corner a daycare full of preschool-age children. My attention, though, is immediately captured by the yawning door to the weaving hall, a room of barn-like proportions where looms of all sizes are lined up like pews in a church. Young men and women sit side by side in front of them, tugging at threads trailing from balls of yarn clustered on the floor.

Toward the back, reaching almost to the ceiling, is one particularly notable rug. At roughly 9.5 metres long and 4.5 metres wide, it’s larger than the average living room. Weavers have been lined up five wide in front of it, in double shifts, for almost seven months. Soon it will travel to Toronto, where it will serve as the focal point for a new Forest Hill residence designed by Cecconi Simone. First, however, it will head down the road to another facility, where it will be hand-scrubbed, sun-dried and stretched for days until it’s perfectly flat, then scissor-trimmed by a team tracing and re-tracing the contours of the rug’s intricate raised pattern. 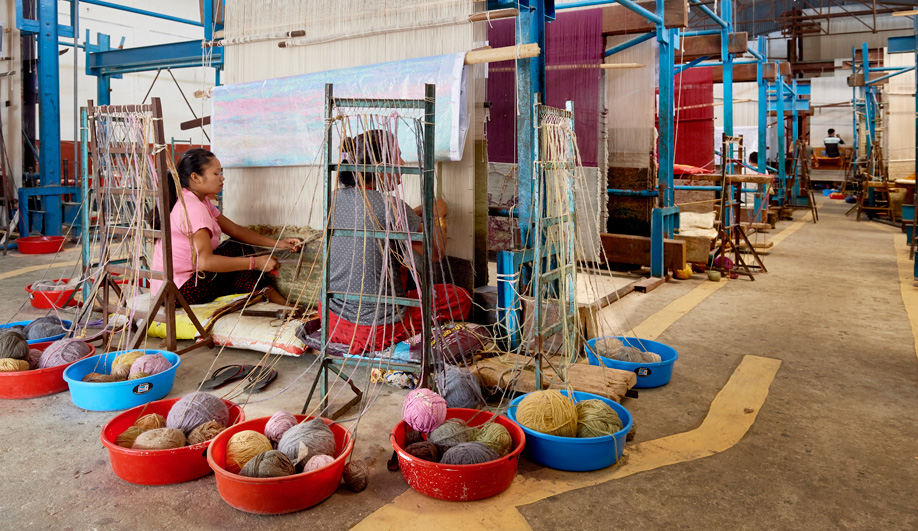 Workers sit side by side as they meticulously tie threads to a carpet-in-the-making. How tightly the knots are tied and pounded down determines the density and quality of a rug.

Barring the electric lights, the scene in the weaving hall could almost be from a hundred years ago, or a thousand: The methods used here, imported from Tibet, follow a tradition that stretches back to ancient times. Jan Kath factories in other countries also draw on local traditions – particularly Moroccan and Persian ones – for inspiration. 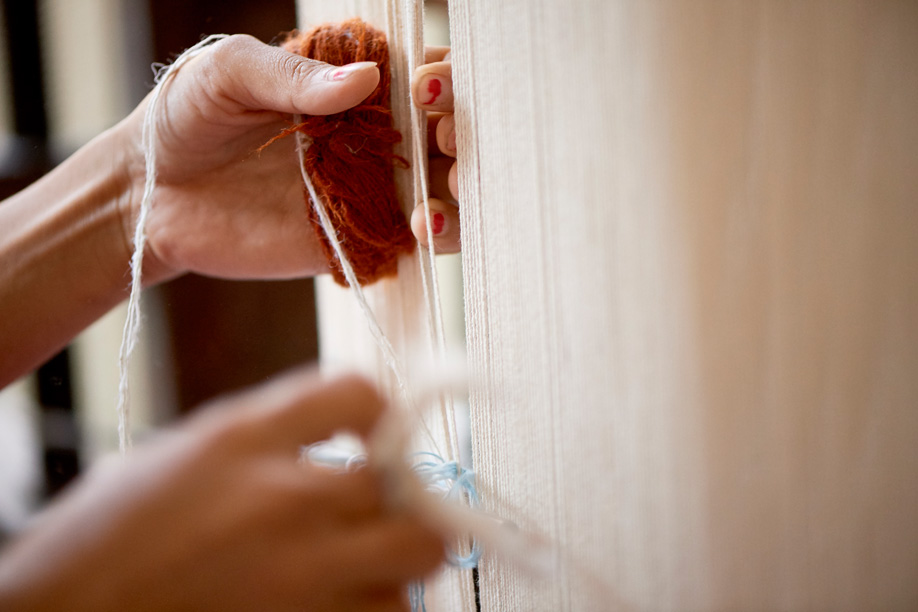 If Kath has a soft spot for these ancient arts, it’s because he grew up around them. “My dad, my granddad and even further down the line all dealt in traditional textiles,” he says. “They used to travel to Iran, Afghanistan, Turkey to buy traditional carpets to import back to Europe. I inhaled that. And I love it. But [these arts] are dying. So I search, proactively, for ways to make these techniques and patterns survive for our century. I use them as a surface, and project a contemporary pattern on top of it.”

Why not mechanize? Jan Kath has, but not in Nepal. “Besides these traditional weaving techniques, we are heavily engaged in modern production methods, such as hand-tufting, but we’re doing it in Thailand,” Kath explains. With lead times so crucial to large commercial projects, he says, it was necessary to turn to hand- and machine-tufting. “I’ve spent months, if not years, on tufting looms, trying to translate our hand-knotting signature into a tufted product.” 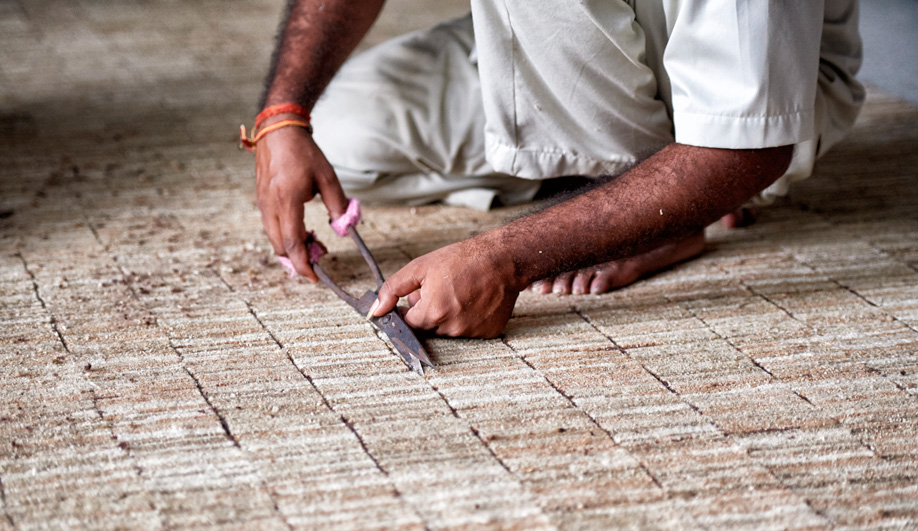 A worker hand trims a finished rug with scissors, tracing and re-tracing the contours of its patterns.

Although hand-weaving rugs the artisanal, Nepalese way may take a bit longer, it also offers, as evidenced by the super-sized piece bound for Toronto, the flexibility to incorporate any technique and achieve any effect at any scale. “Each knot is like a pixel. Hand-weaving allows us to play with each pixel. And by controlling a single pixel, we can replicate whatever we want.” Hand-working also gives artisans absolute control over quality and imparts the signature finish that makes each rug a true work of art. “All our raw materials are procured naturally, based on old styles,” Kath says. “We still use only hand-spun wool, nettle and silk, which imparts a certain spirit to our carpets – a certain vibration.” 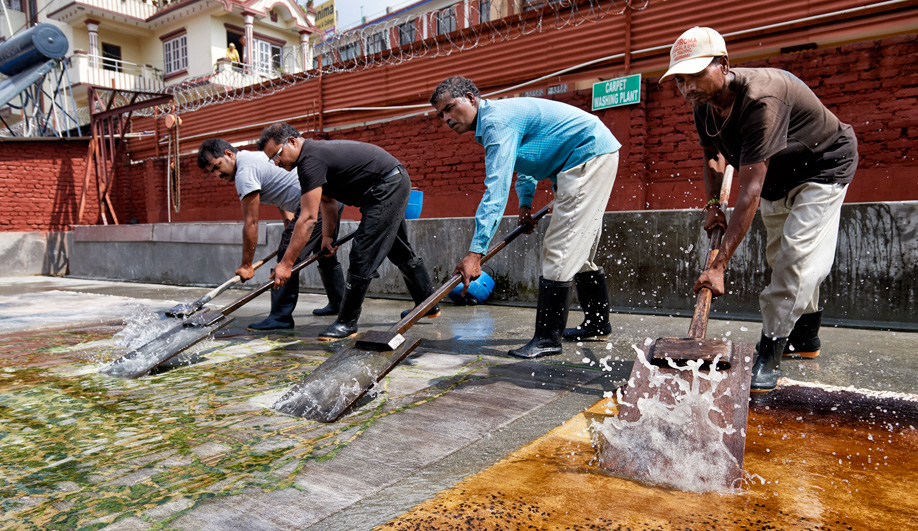 Before trimming takes place, carpets are washed, scrubbed, sun-dried and stretched for days until they are perfectly flat.

Given that his career in the industry officially began in quality control, it’s no wonder that Kath pays such obsessive attention to even the subtlest effects that different weaves or materials can achieve. Still, he came to rugs the long way around. Despite the fact that his family was in the trade, Kath had no interest in following in their footsteps. “Never ever,” he says. “I just wanted to run away.”

And so he did, leaving his native Bochum, Germany for far-flung locales until the world of rugs pulled him back. “I was stranded here in Kathmandu, coming back from India after a couple of years living a wild hippie life,” he says. Too broke to make it home, Kath had the good fortune to run into an acquaintance on the street – a supplier who used to sell Persian rugs to Kath’s grandfather and who just happened to be looking for someone to establish a quality control system for his operations in Kathmandu.

The next step in Kath’s education occurred when his then-mentor sent him to scope out opportunities in Ulaanbaatar, Mongolia. “It was the beginning of the nineties,” Kath recalls. “He didn’t want me to weave carpets right away, just to check on the situation. ‘Is there wool? Can we buy silk? Is there still a traditional weaving technique available?’ All these things.”

When Kath’s mentor retired, Kath took over his operations. For the first couple of years, he continued in the model his mentor had established, but, he reflects, it wasn’t working. “Carpets were totally out when I started,” he says. “Nobody wanted to buy carpets. All my savings went down the drain.” He realized that not only was he failing, but he was failing at something he swore he’d never do. He resolved that if he was going to go bust, at least he should do it while making the kind of rugs he wanted to make. “Only when I started to listen to myself did I come up with a successful collection.” 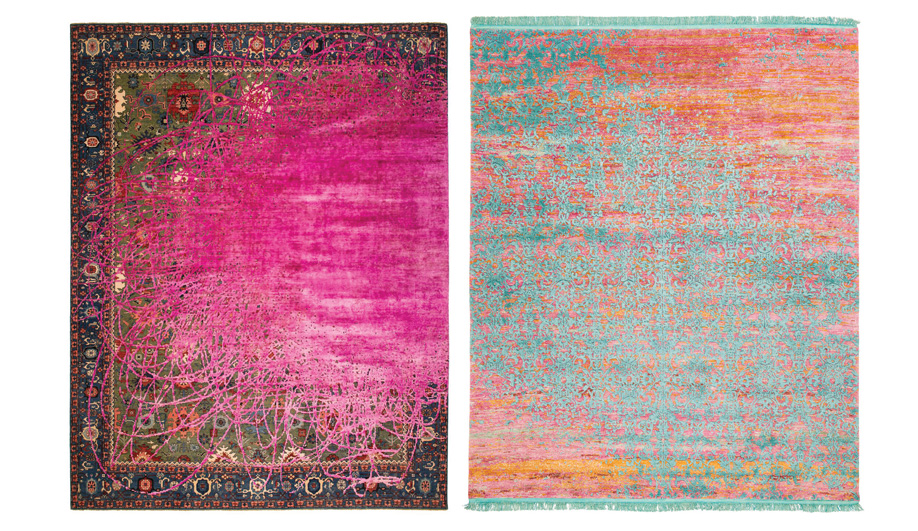 By making designs that suited his personal tastes – often traditional patterns reinvigorated by unorthodox colour combinations or striking textural effects – he began to turn the tide. A couple of years later, in 1997, he officially launched the rebranded Jan Kath company. The rest is history. “If you open up a magazine today, it’s full of carpets. Please don’t get me wrong, but I think that my team and me – we were part of that.”

Rugs, it turns out, still have a place in contemporary interiors – if they speak the language of contemporary design. Customization factors heavily into this. Jenni Finlay, Kath’s partner in the company’s showrooms in Toronto and Vancouver, estimates that nearly 90 per cent of the rugs she sells are made to order; because they’re handmade at every step, no extra effort goes into the manufacture of a unique piece. Often, customization is simply a question of size (after all, before a rug can be a good fit for a room, it first has to fit in the room), but colours can also be matched to an existing palette and even the pile height and level of sheen can be specified.

The massive rug destined for Cecconi Simone’s project in Toronto, for example, is a combination of two stock Jan Kath patterns tweaked with a custom colourway. “We realized that the size precluded us from going to a standard product offering,” says Elaine Cecconi, who led the project. “We also knew that the carpet is a focal point of the home: It had to be special and spectacular. And now that it’s ensconced in the large family room, it looks so perfect that it seems it was always there.”

Customization aside, a company’s collections must first speak to a contemporary audience – and Jan Kath’s offerings run the gamut. Some models look almost like photographs, combining up to 50 colours of yarn – each comprising three types of fibre – into panoramic images of twinkling galaxies, sunlit clouds or vast washes of pastel watercolour. Others depict more prosaic iconography, like dilapidated signboards, neon lights or graffiti. Still others – including the early and much-imitated Erased Classic line – begin with a squarely traditional motif, then run it through with lines like static on an old T.V., animate it with radiating vectors resembling rhumb lines on an ancient map or obscure it with scribble-like swirls of shimmering silk. 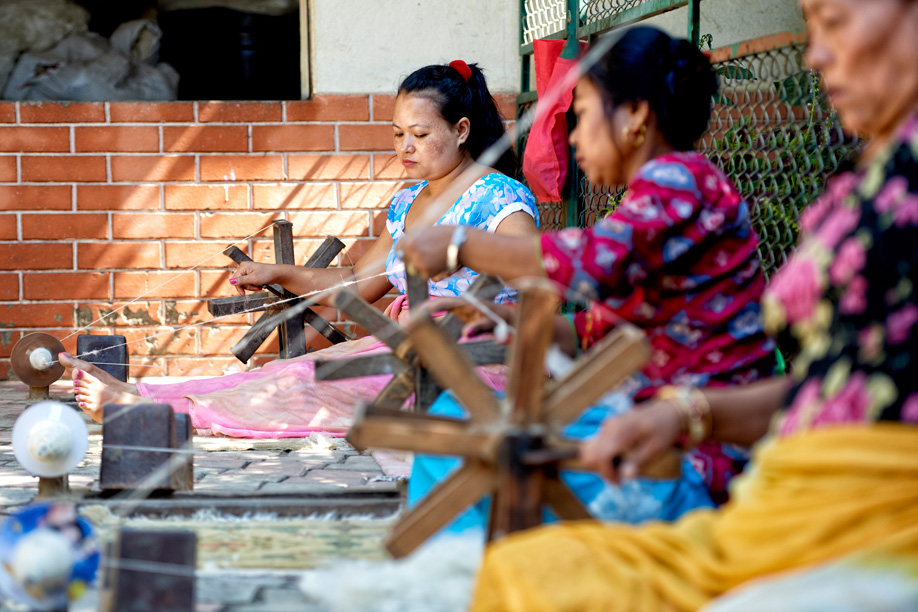 The stories these rugs tell are wrapped up in the places Kath has been and things he has seen: the brilliant floral patterns of the tapestries he encountered while riding the Trans-Siberian Express, the abstract motifs of boucherouite rugs that villagers knot from recycled rags near his factory in Morocco, a faded billboard that loomed over the road to his workshop north of Khon Kaen, Thailand.

While Jan Kath’s catalogue may reflect its founder’s many passions, Kath is the first to admit that it represents the combined effort of thousands of people. And as the company grows to the point where no one man can oversee its many interconnected parts, the next generation is already rising to take his place. Kath’s oldest son, Sanchir, has started learning the trade from the ground up, even spending a season in Kathmandu working as a weaver. “I didn’t force him to do that,” Kath assures me. “It would be great if it carries on, but …”

If the prospect of Jan Kath without Jan Kath seems unlikely, the company, it should be remembered, was built on a host of seamlessly woven opposites: new and old, exotic and familiar, luxury and utility, tradition and innovation. It may sound paradoxical, but the contemporary is, after all, just a sliver of the continuum of history. “Tradition develops slowly,” Kath says. “Maybe not visibly in a human’s lifetime, but it still continues. And what I want to be …” He pauses a moment, searching for the right words. “I want to be the frontier of tradition.”