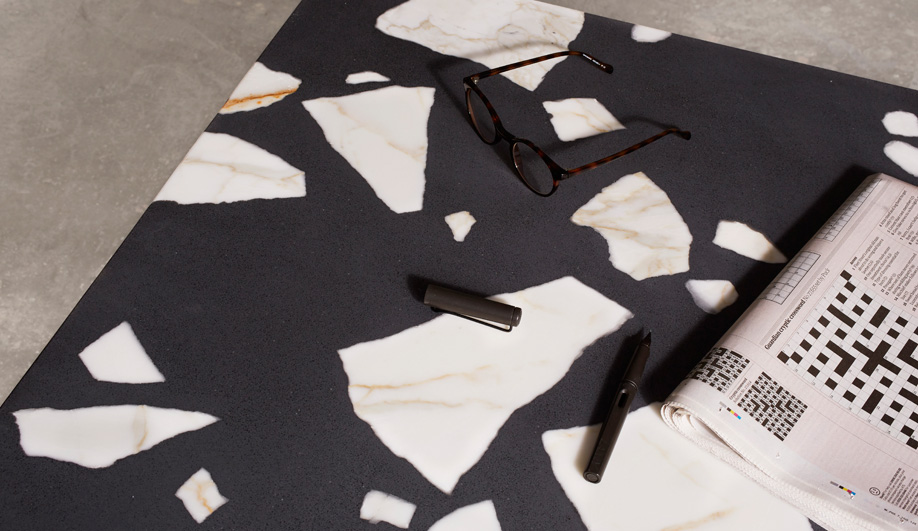 Kvadrat refashions the future of fabric

Kvadrat, the Danish textile manufacturer, has long been known for the high quality of its fabrics. Now it’s seeking to redefine the category altogether, pushing the limits of technology to create industry-leading products and eliminate waste. Exhibit A: Re-wool, a collection made with 45 per cent recycled wool – the repurposed scraps left over from Kvadrat’s yarn spinners in Britain. The palette – a rich array of luminous blues, greys, golds and other hues – was developed by Danish designer Margrethe Odgaard, who based her colour choices on a “Nordic spectrum” and aimed for a lustrous effect. 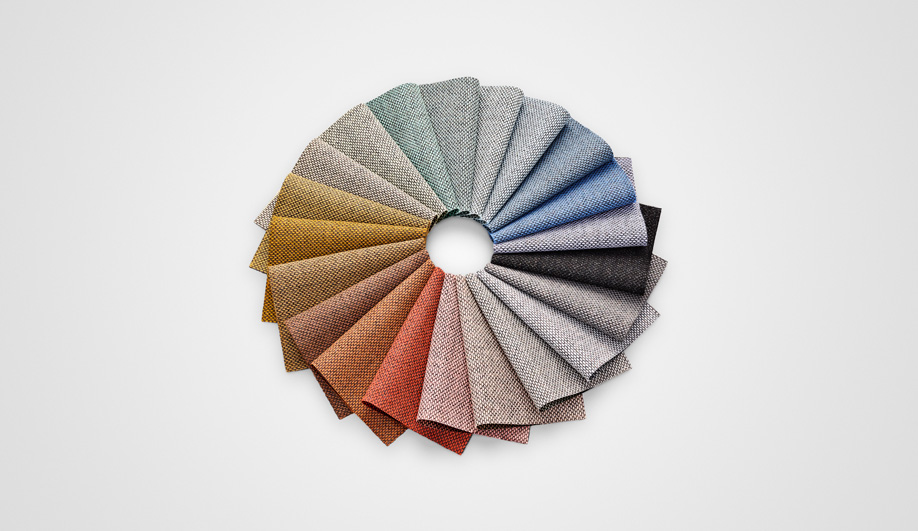 Developed by designer Margrethe Odgaard, Kvadrat’s Re-wool collection is made of 45 per cent recycled wool.

“Specifically,” says Odgaard, “I focused on finding the right balance between warp and weft. I thought of shimmering pearls on a recycled woollen base. It was important to me that the tones in the weft had a certain glow that could lift the colour from the dark base.” This shimmer and depth, Kvadrat says, makes Re-wool especially well suited to upholstery: “Reminiscent of colourful stitchings on a darker background, Re-wool’s exceptional depth of colour [creates] a dynamic play on the textile’s surface when applied to furniture.” The fact that the line is also eco-friendly is icing on the cake. 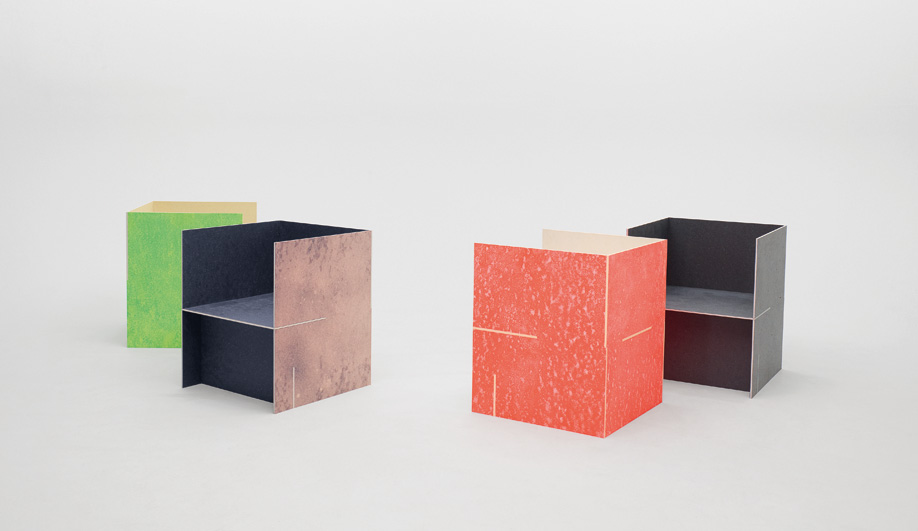 Among the prototypes constructed out of Kvadrat and Really’s Solid Textile Board are Jo Nagasaka’s boxy club chairs (above) and Front’s sculptural wardrobe (below). 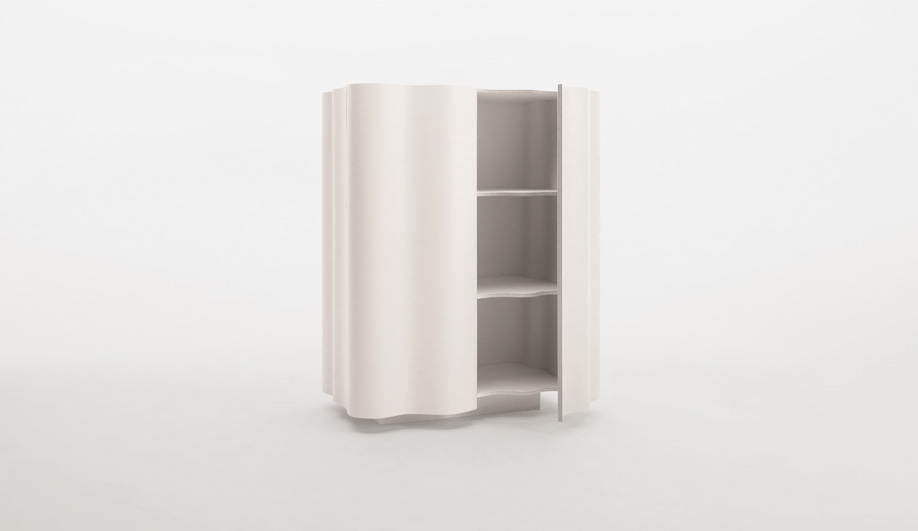 Kvadrat’s green ambitions, however, don’t end at upholstery. In partnership with Really, a Copenhagen-based firm partially owned by Kvadrat, the larger company is channelling yet more of its textile waste into the creation of hard goods, including seating, cabinetry, shelving and other items. Such products are being constructed out of the high-density Solid Textile Board that Really produces using end-of-life fibres and offcuts – mostly cotton and wool – from Kvadrat and other sources (the core of the board is made of upcycled white cotton from industrial laundries). The board’s potential was highlighted during last year’s Salone del Mobile in Milan, where a host of commissioned designers – including Jo Nagasaka, Jonathan Olivares and Benjamin Hubert – exhibited boxy club chairs, sinuous room dividers and sculptural wardrobes made from the material. 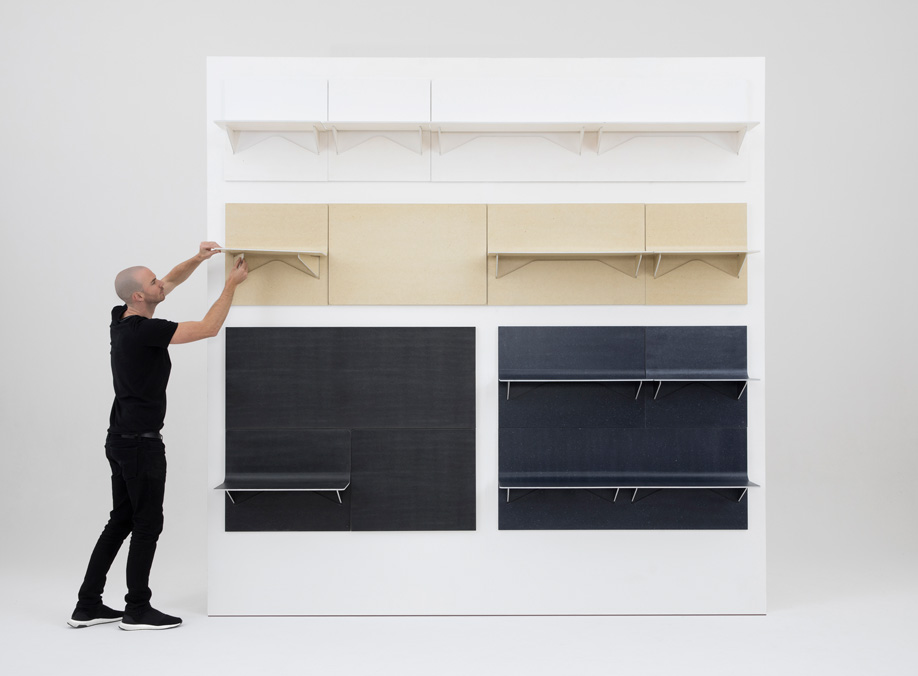 Among the most commercially viable of the designs was Hubert’s Shift, a flexible retail display system composed of acoustic wall panels incorporating fold-out shelves. The system’s name, of course, alludes to its versatility, although it’s also reflective of the broader shift that such products represent for the design industry. The prospect of displaying clothing and other soft goods on a panel made from recycled fabrics is, after all, the quintessence of the circular economy, which forward-looking companies such as Kvadrat are clearly attempting to tap into.

For some years now, Organoid Technologies of Austria has been supplying a host of natural surface materials – hay, ground bark, cocoa husks – to enterprising designers, but the carrier panels they’ve come on, such as high-pressure-laminate (HPL) boards, have been on the inflexible side. That’s changing. With the introduction of Organoid Flexi, as many as nine stock materials (including those mentioned above, plus others by special order) can be had on thinner, more flexible sheets of veneer-reinforcing non-woven fabric without glue penetration or bleed through. 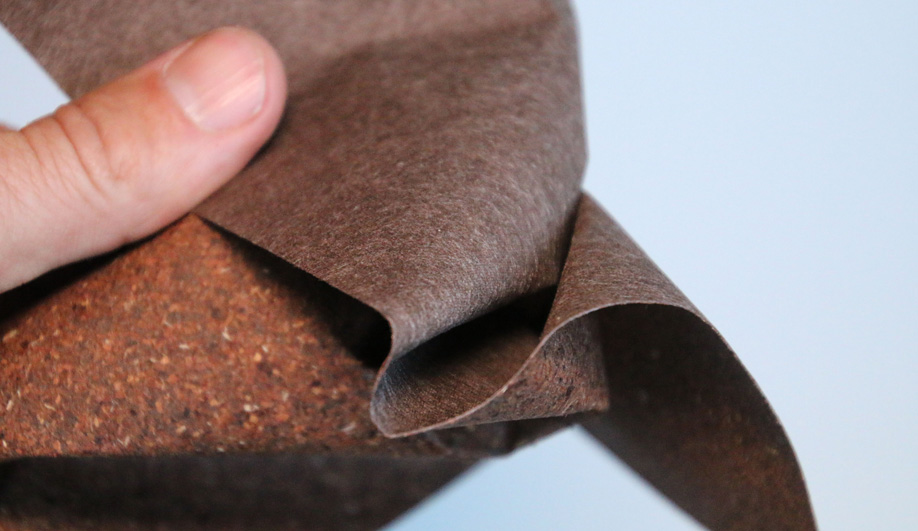 Like the HPL panels, the Flexi sheets measure 305 by 132 centimetres but can be bent and manipulated (i.e., cut with a cutting machine, trimmed with scissors and even sewn) almost like a textile, making upholstering curved walls, coating irregular foundations or even covering furniture even easier – and more intriguing. Imagine wrapping a headboard, say, with Kafee, the Organoid surface made of coffee grounds with a bean relief structure: Waking up to the scent of coffee every morning would no longer require putting on a pot.

The material possibilities of mycelium – the underground root structure of fungi – have been explored through everything from lamps to architectural building blocks. Until now, however, these designs have looked and felt experimental – and very mushroom-y. The game-changer? California-based Bolt Threads’s Mylo, which convincingly mimics leather. Founded in 2009, the company embraces an eco-driven ethos to “transform the textiles market.” Having previously released a biofabricated spider silk called Microsilk, 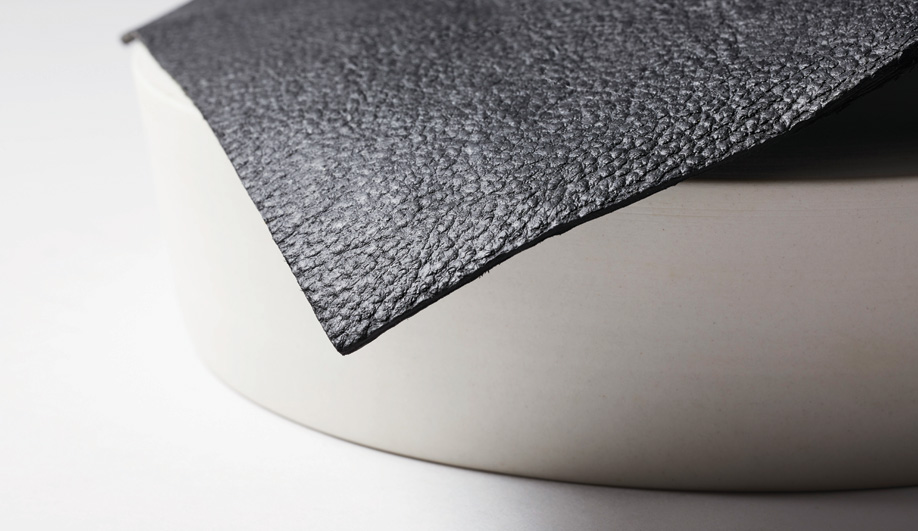 it partnered with a New York-based biotech firm, Ecovative, to create Mylo, a durable and supple mycelium-based textile that right off the bat caught the attention of no less than Stella McCartney. Bolt Threads worked with the fashion designer to create a gold dress (displayed for a time in MoMA’s Items: Is Fashion Modern? exhibition) as well as the Mylo Falabella Prototype 1 bag (part of the V&A’s Fashioned from Nature show, which wrapped in January). Last fall, Bolt Threads went fully commercial with Mylo, launching a mushroom-leather tote co-designed with Portland brand Chester Wallace on Kickstarter.

Rammed Earth Works eases up on the bulk

When new building code regulations changed the way that traditional rammed earth could be used, requiring that insulation be added, David Easton, founder of Napa, California-based Rammed Earth Works, began to rethink the material. “The complication and expense of adding insulation to site-built walls motivated us to develop a precast panel system,” Easton says. Experimenting with forming the panels in its shop, his team was able to bring the thickness down, from between 46 and 61 centimetres to a mere 7.6 centimetres. 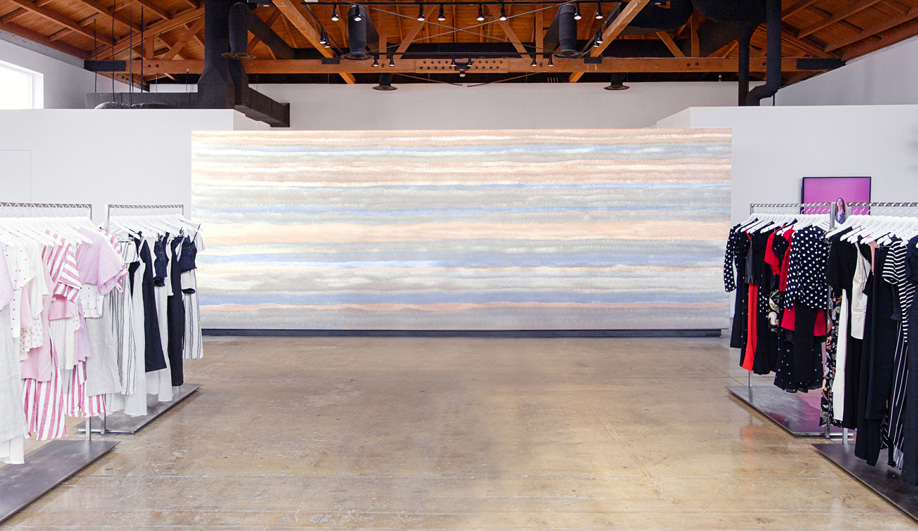 “What’s special about this,” Easton explains, “is that an architect can get the beauty of rammed earth without the bulk.” The company has developed a technique for adding the layers of clay and minerals to the formwork and compacting them so that the final product has a distinct striation. Although the colours are limited only by what’s found in nature, Rammed Earth Works sources all of its material locally. For a recent project in San Francisco – the Reformation clothing shop designed by Bohlin Cywinski Jackson (pictured) – the company installed a stunning feature wall with flowing lines of soft greys and blues.

Urban Terrazzo for the 21st century

Terrazzo has been having a renaissance of late. Speckled surfaces are popping up everywhere – not just on floors, but on walls, furniture and more. In this eco-conscious era, it’s only appropriate that one of the oldest upcycled materials is experiencing a comeback, but the designers working with 21st-century terrazzo are doing much more than just creating composites from pebble-sized bits of marble waste, as Venetian stoneworkers began doing centuries ago. 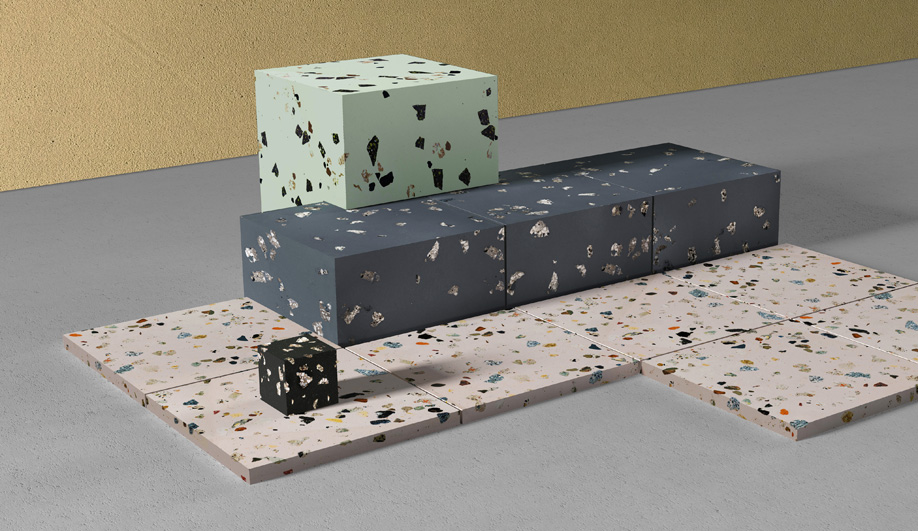 Take Urban Terrazzo, a project by the Berlin-based design and architecture collective They Feed Off Buildings, which salvages material from demolished structures in a variety of cities to create a new product. Chunks of brick, concrete and even metal are broken down into aggregate and mixed with ultra high performance concrete to make surfaces, including custom countertops, in which the character of the former building lives on. The project was recently nominated for both a Green Product Award and a German Design Award. 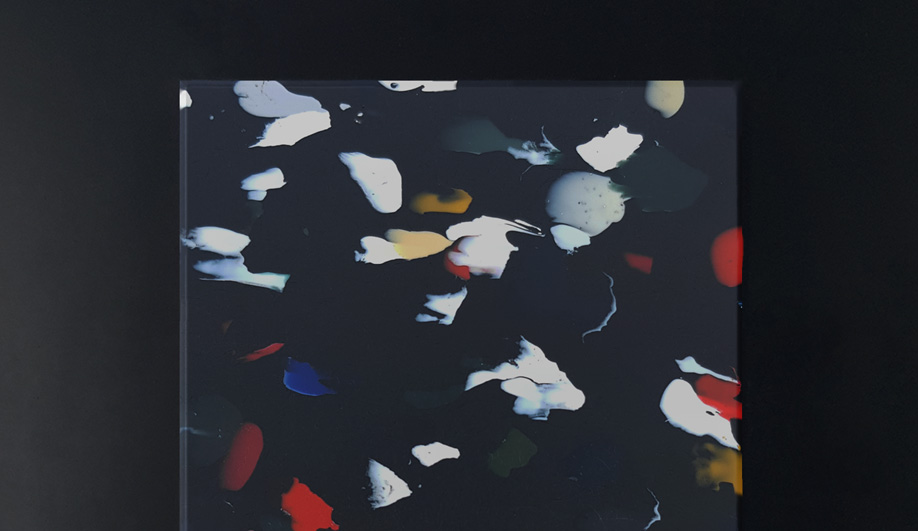 New takes on terrazzo include Plasticiet’s recycled plastic surfaces (above) and Altrock, with its sizeable marble offcuts (below).

In Rotterdam, meanwhile, Marten van Middelkoop and Joost Dingemans officially launched Plasticiet in 2018, after graduating from the product design program at Willem de Kooning Academy. Aiming to recycle plastic waste into a long-lasting product, the start-up began experimenting with different types of plastic to develop a sheet material that could be used for interior architecture or furniture. “Realistically, plastic is one of the most broadly used materials in this age, and it’s not going anywhere. What we need to change is the way we use it,” says the team. Their rigid panels are made in four terrazzo-like styles, using materials such as lawn furniture, lunch trays, buckets and post-industrial mass-production waste. The product was recently used to form an eight-metre-long entrance desk at the Biennale Interieur in Belgium. 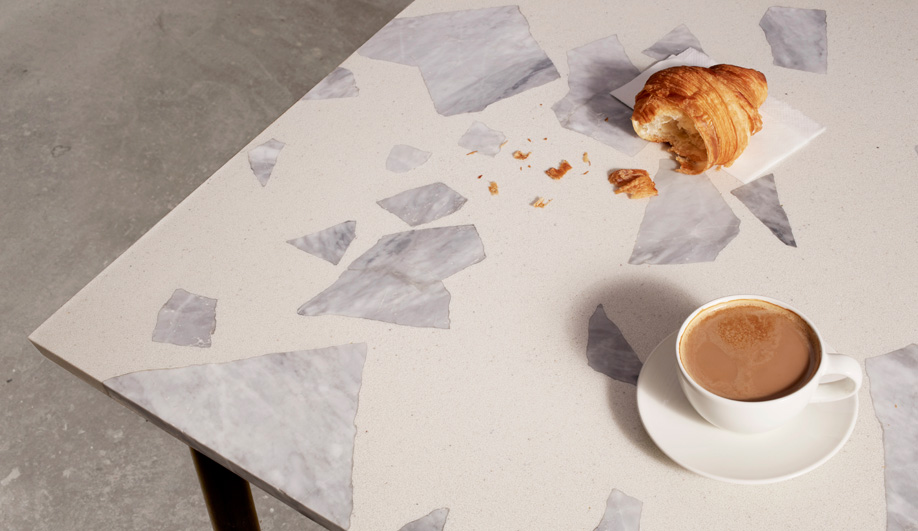 While Robin Grasby’s Altrock solid surfacing may incorporate more traditional terrazzo materials, the look is anything but. The London designer’s proprietary mix is made from 87 per cent reclaimed and recycled materials and incorporates marble dust and chips as well as oversized chunks of offcuts and broken slabs. Held together with 13 per cent resin, the product has an exaggerated, graphic look that shows off the characteristics of the natural stone. The slabs are hand-cast in custom shapes and sizes, then sealed with wax oil to add durability and waterproofing, making them suitable for furniture, worktops and even bathroom surfaces. Pigments can be added to create endless colour options. Though Altrock launched only this past October, it’s already appearing in interior projects, including on the tabletops at the new Marmelo Dining Room (designed by Haxch) in London.