Partisans Raises the Bar with Quetzal in Toronto
Inspired by the tarps over Mexican markets, a voluptuously wavy ceiling crowns a Toronto restaurant designed by Partisans. 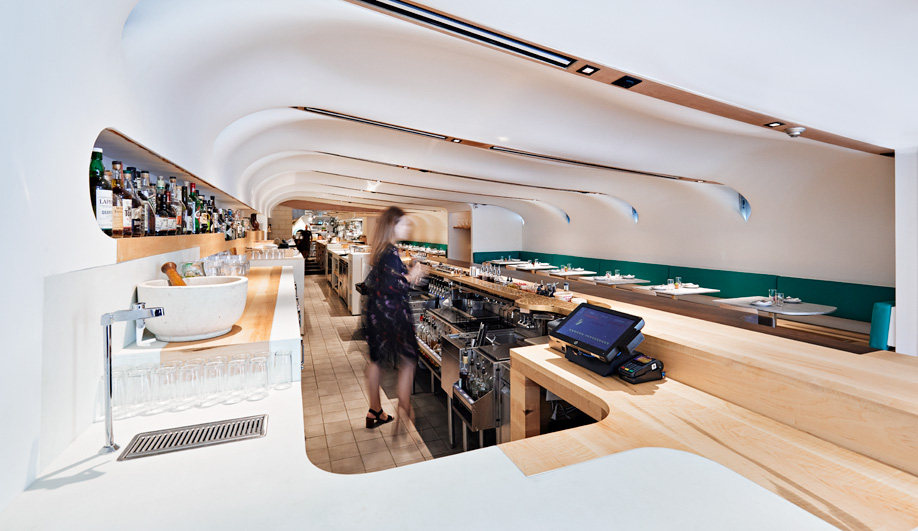 Inspired by the tarps over Mexican markets, a voluptuously wavy ceiling crowns Quetzal, a Toronto restaurant designed by Partisans.

On first impression, the new restaurant Quetzal, a high-end Mexican eatery in Toronto, seems conspicuously lacking in Latin American flair. The long, linear and distinctly low-ceilinged space is composed of 12 modular bays, each about two metres wide, that create alcoves for seating – plus a striking canopy over the bar-slash-kitchen. The palette has a minimalist, art gallery vibe: The bays are crafted from fibreglass-reinforced gypsum and the bar is a geometric jigsaw of lightweight Ductal concrete and Canadian maple.

The local wood species, also used for the floor and banquettes, has been left blond except for the dark-stained dining surfaces, which include a trio of two-person tables that ingeniously cantilever from the bar. “It’s our most restrained space so far,” says Pooya Baktash, a co-founder with Alex Josephson of the Toronto firm Partisans and the principal who oversaw the design. “But we still found a way to be expressive.” 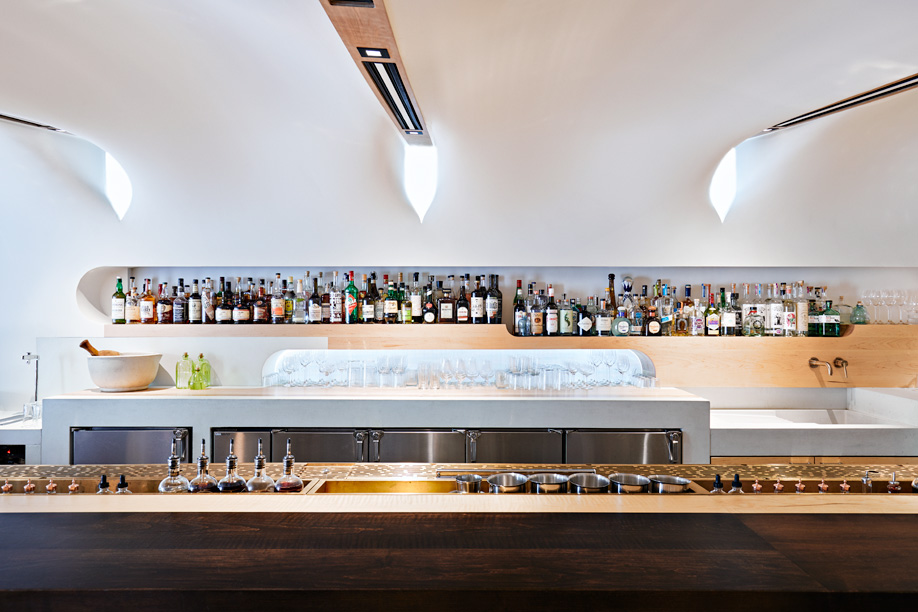 Stretching from the front to the very back of the restaurant, the bar is a jigsaw-like amalgam of Ductal concrete and Canadian maple. Details such as the bronze drip trays are tailor-crafted.

Partisans is justly known for exuberance. The architecture studio’s Bar Raval – also on Toronto’s College Street and owned by the same chef that developed Quetzal, Grant van Gameren – is an amped up, contemporary twist on Spanish art nouveau. There, the CNC-routed mahogany panels that form the walls and bar ribbon wildly to resemble fabric more than wood. The windows are shrouded in steel screens laser cut with complex, interwoven patterns inspired by Spanish tile. Opened this past summer, Quetzal might at first seem like an abrupt change of direction for Partisans. 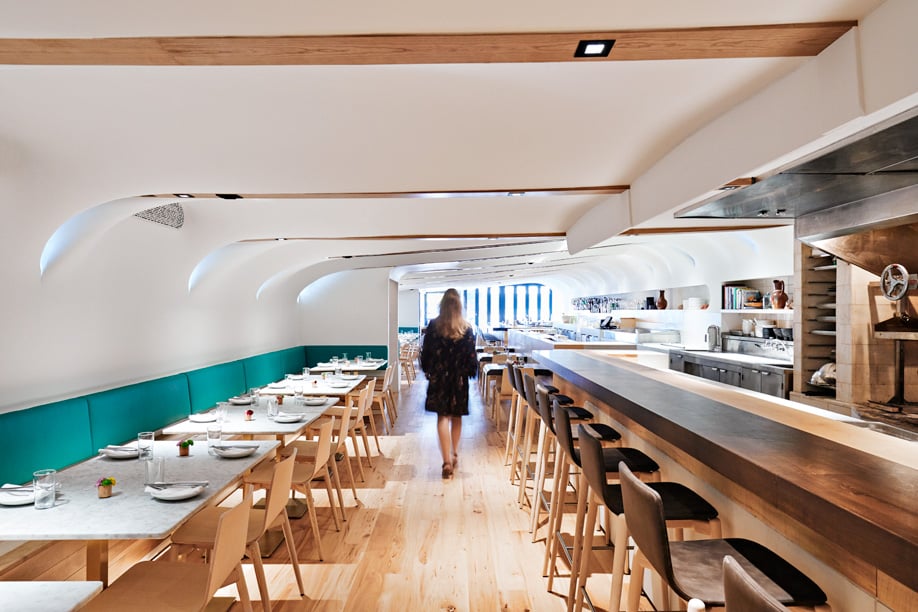 At Quetzal in Toronto, the fibreglass-reinforced gypsum ceiling dips as low as 2.5 metres and seems to sinuously merge with the bar.

Yet the expressiveness Baktash refers to reveals itself in the details. The prefabricated bays (made by Formglas, a Vaughan, Ontario company that typically works on such large-scale public buildings as SOM-designed airports) are voluptuously curved, recreating the billowing effect of wind-caught tarps shading the stalls of Mexican markets (a key inspiration). They seem to shift shape depending on the light, taking on the appearance of snow drifts, warm meringue or sculpted ivory throughout a single dinner service. The ceiling integrates simple, razor-straight beams – also in maple, also inspired by Mexican mercados – that vanish uncannily into the wall, slipping behind a decorative steel scrim (laser cut with motifs recalling Oaxacan pottery) and into teardrop-shaped openings where warm LEDs obscure each beam’s final destination. 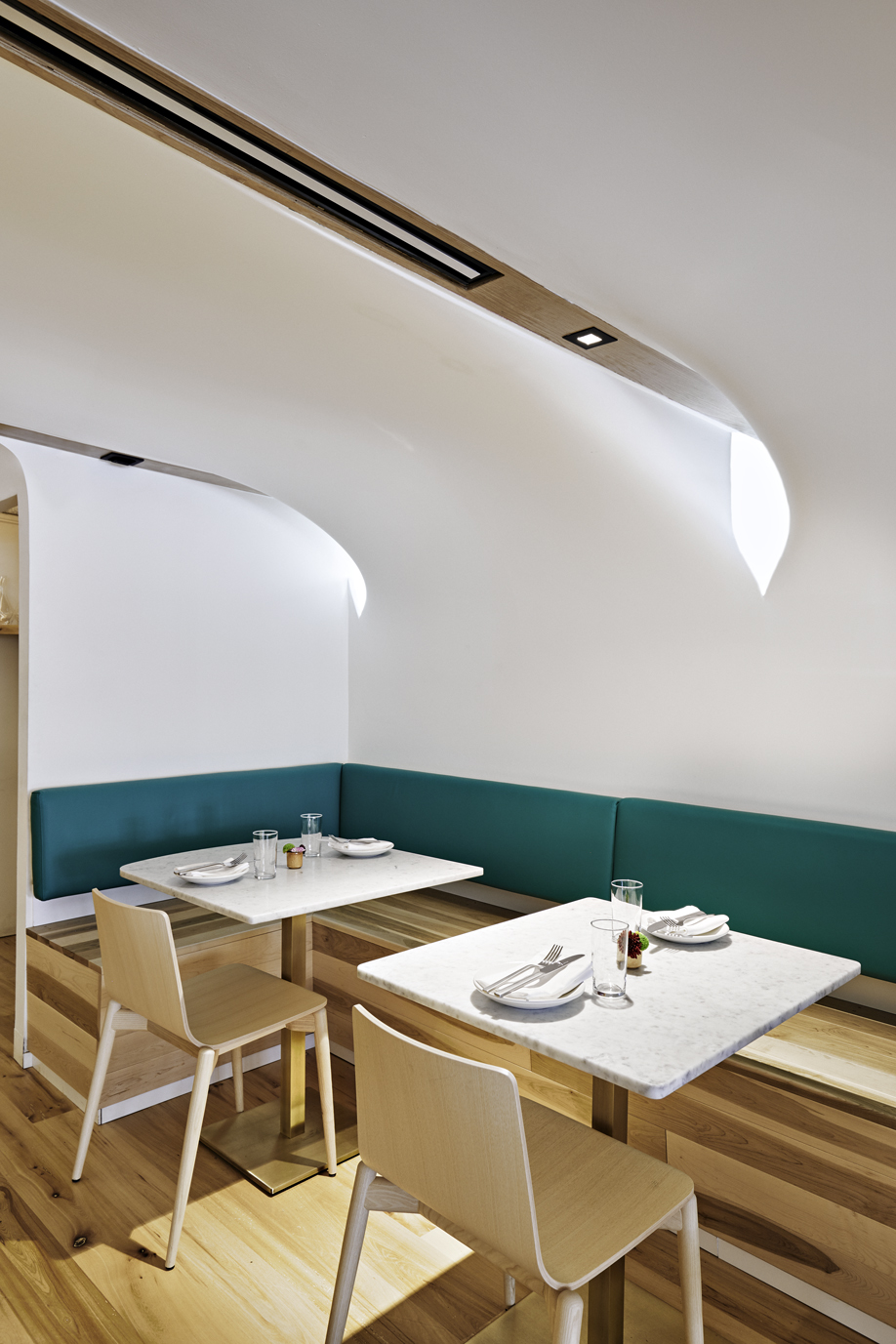 The banquette backrests are upholstered in vibrant green leather – the main colour accent in a sober, material-driven palette.

In part, the pared-back design is explained by a unique set of constraints. The 280-square-metre space unfolds as four distinct dining experiences: at the 19-metre-long bar, at the cantilevered tables, at the wall-hugging banquettes along the opposite wall and at the chef’s table. Altogether the restaurant seats 72. The entire layout is dictated by the linearity of the space and anchored by a relative anomaly in North America: a 7.3-metre-long, wood-fired cooking pit. Running from the edge of the bar at the front into the open kitchen at the back and culminating in a traditional clay oven, this stove is the principal source of heat for the chefs.

“The technique of cooking on the open flame helps bring authenticity to the food, which was very important to us,” explains Julio Guajardo, who, with wife Kate Chomyshyn, is co-chef and co-owner of Quetzal in collaboration with van Gameren and Owen Walker. Besides producing elegant, unusual dishes, the grill also serves up an enticing aroma. 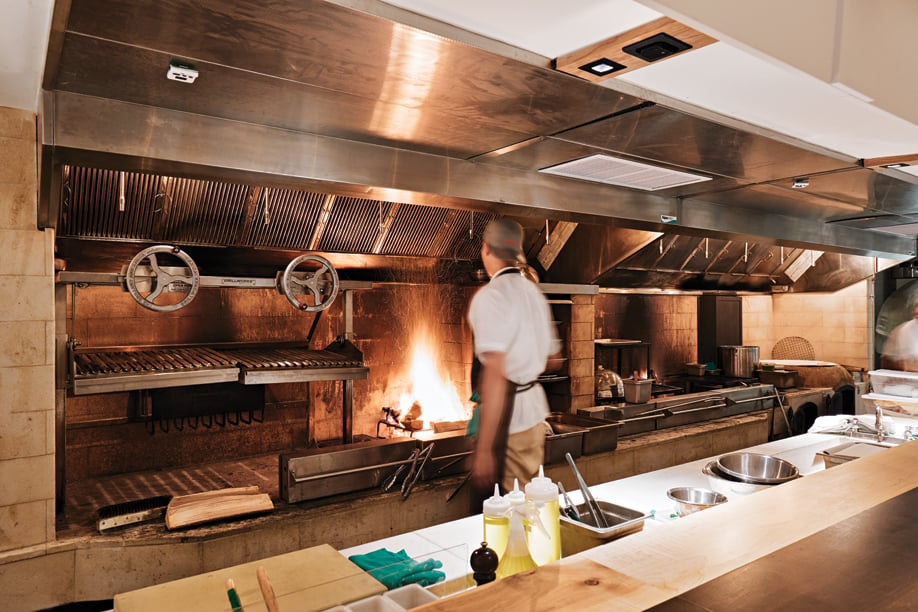 The wood-fired grill spans a generous 7.3 metres. Ventilation is incorporated into beams evenly spaced out among the ceiling’s bays.

To ventilate the grill and keep the open-galley kitchen and dining area comfortable, the team customized an HVAC system with three times the capacity of those found in conventional restaurants, where the kitchen is typically isolated from the dining room. This system chewed up a lot of head room – at its highest point, the undulating ceiling is a hair-grazing 2.5 metres – but also inspired an ingenious solution. The design team incorporated linear air diffusers, evenly distributed to avoid uncomfortable blasts of air, into the thin maple ceiling beams. “We wanted everything to be even,” says Baktash, who notes that the approach works for more than just the HVAC. The lighting and the sound system are directly integrated into the beams as well, so that all customers get the same experience no matter where they’re sitting. 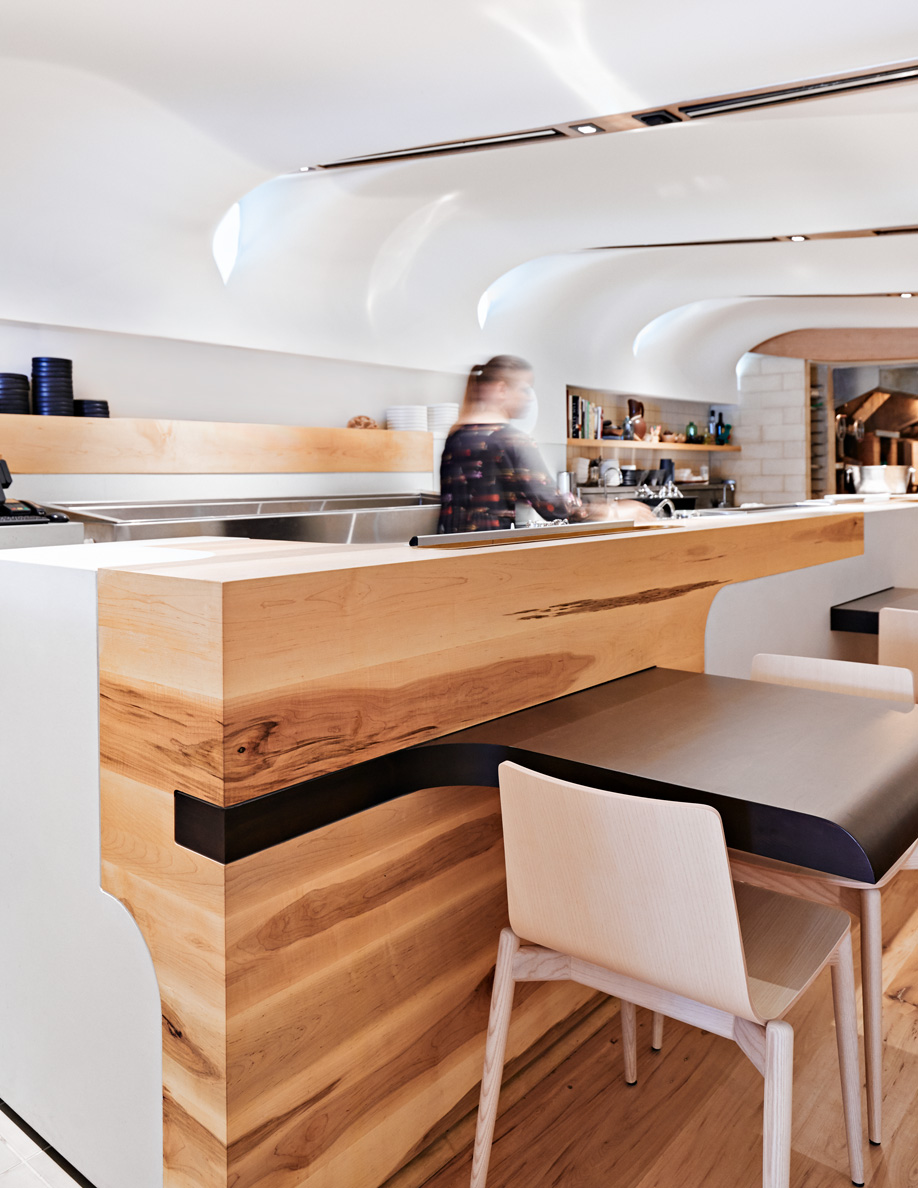 Made from dark-stained Canadian maple, intimate tables for two cantilever from the middle section of the long, linear bar.

And so, a night at Quetzal – which took a total of two and a half years to complete – is a carefully calibrated event. When the place is full, which it almost always is, there’s a sense of magic. The gallery-white walls catch the amber glow of the open flame; patrons chat amiably under the intimate, enveloping canopy. The elements might seem simple, but they create experiences that are enduring.