Inside the Bewildering Pharos Wing at Tasmania’s Mona Museum
The Pharos wing at Australia’s Mona museum is a bewildering series of luminous installations designed to keep visitors in the dark. 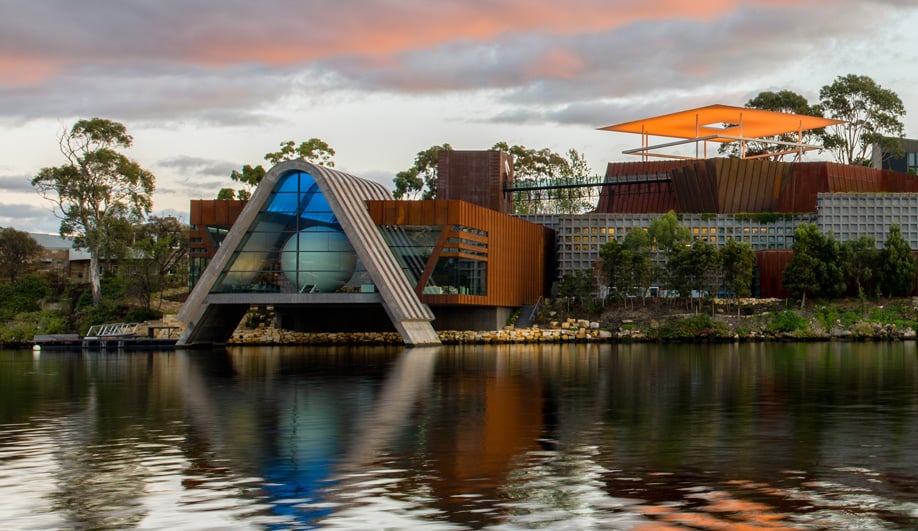 The sphere that dominates the Pharos wing’s tapas bar is actually the shell of an installation by light artist James Turrell.

The Pharos wing at Australia’s Mona museum is a bewildering series of luminous installations designed to keep visitors in the dark.

Tasmania’s privately owned Mona museum (aka the Museum of Old and New Art) is designed to disconcert visitors – and its new AU$32-million addition is no exception.

Simply reaching the wing – named Pharos, for the ancient Egyptian lighthouse – is an expedition akin to that of Theseus setting out to slay the Minotaur. There is no signage or clear path from the main entrance, where visitors descend a spiral staircase that winds deep into the museum’s belly. At the back of one of the lower-level exhibit halls, a glass panel conceals a light tunnel, dubbed Beside Myself, created by American light artist James Turrell. At the culmination of this tunnel is Faro, the new wing’s tapas bar. But don’t expect the confusion to subside there. 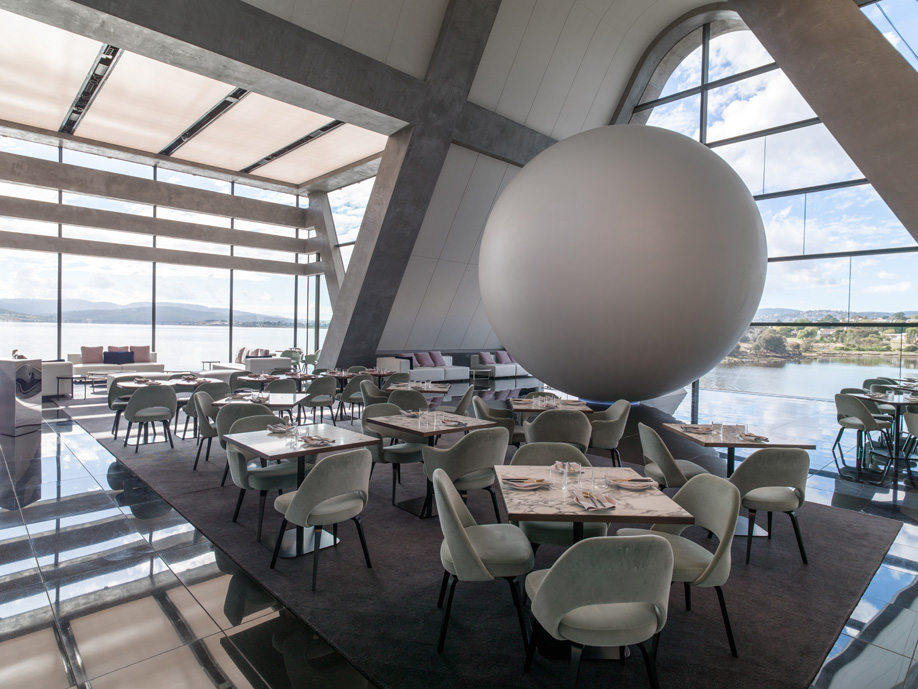 Obscuring the restaurant’s floor-to-ceiling windows is a white, six-metre-wide sphere. Easily mistaken for a simple sculpture, the orb harbours a door that leads to an immersive kaleidoscopic experience courtesy of Turrell.

“You can have lunch there a million times and never understand what’s going on inside the sphere,” says curator Jarrod Rawlins, explaining that the goal of the museum’s founder, David Walsh, “is to make sure you don’t know what’s happening or where you are.” Walsh worked closely with Melbourne architect Nonda Katsalidis on the project.

“A lot of museums are big spaces where you move from one white room to the other,” says Katsalidis. “With Mona, you go through little apertures and break out into huge spaces, like popping out of a rabbit hole. It’s a journey of compression and expansion.” 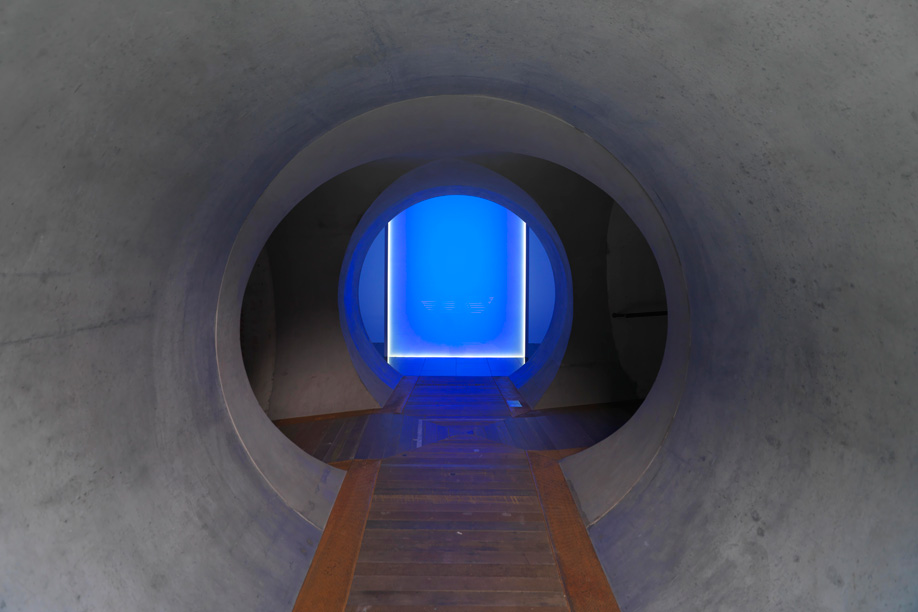 James Turrell’s Beside Myself is a tunnel of light that connects Mona’s two wings. 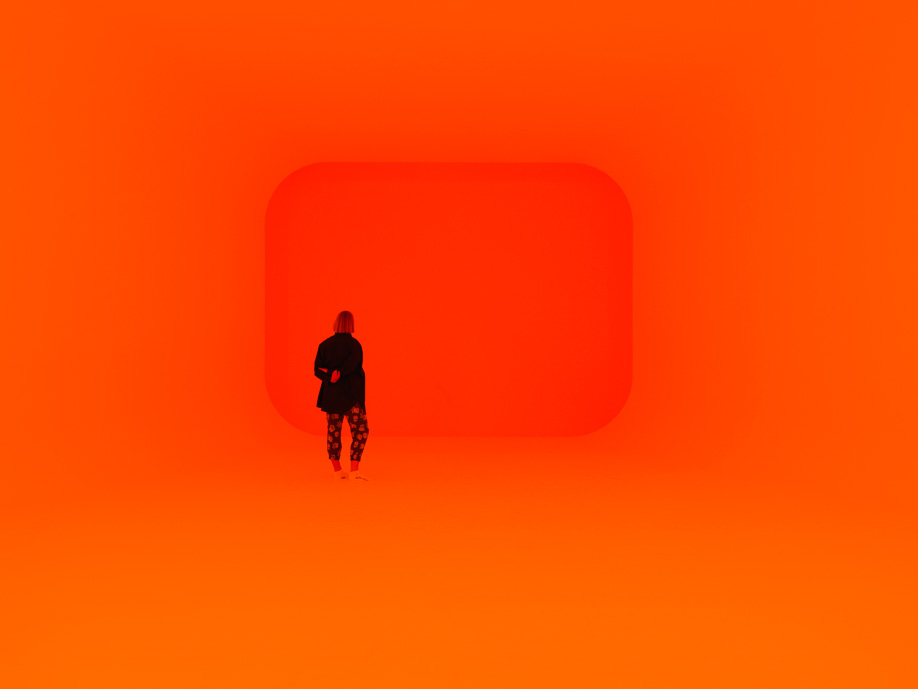 Event Horizon, in which patrons must don white socks, is a seemingly endless field of undulating colour.

Unlike the original structure, which is largely underground, Pharos allows Mona to show a little leg as it cantilevers out over the River Derwent. Like rest of the museum, however, each space is custom designed for specific artists. For example, Faro’s 14-metre inverted parabola was inspired by Turrell’s affinity for 18th-century French architect Étienne-Louis Boullée. In a steampunk atrium, meanwhile, the concrete walls are reflected in the surface of Richard Wilson’s 20:50, a work that fills the room to waist level with oil. Another hallway leads to Turrell’s Event Horizon, a cube-shaped room washed in colour-shifting ultraviolet light. 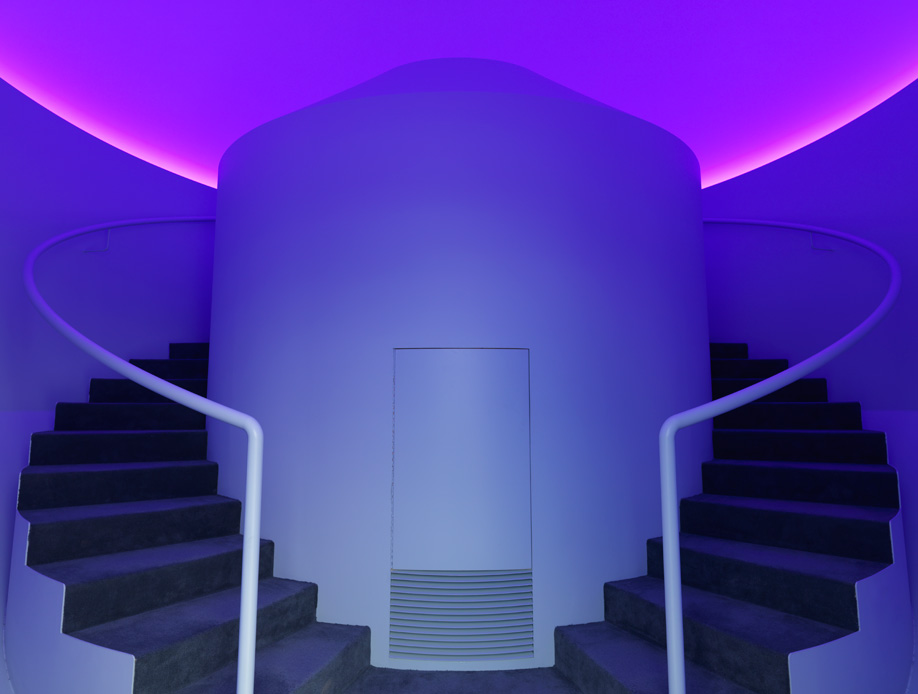 Unseen Seen is an intimate experience of light and sound hidden inside a giant orb.

The whole experience ends abruptly in a dead-end passageway referred to for now as the “tunnel to nowhere.” Come 2019, when Alfredo Jaar’s The Divine Comedy (three chambers based on Dante’s poem) is unveiled, it will be a tunnel to hell. Ai Weiwei’s White House is also set to be installed in this next extension. Although these plans are clearly laid-out, the experience is guaranteed to be just as disorienting. “People respond to the building as much as to what it contains,” says Katsalidis. “You never know what’s going to happen next.”