Scenes from the 2014 AZ Awards Gala
On June 20, hundreds of guests cheered for the recipients of the AZ Awards, People's Choice favourites and Awards of Merit. See who joined the party. 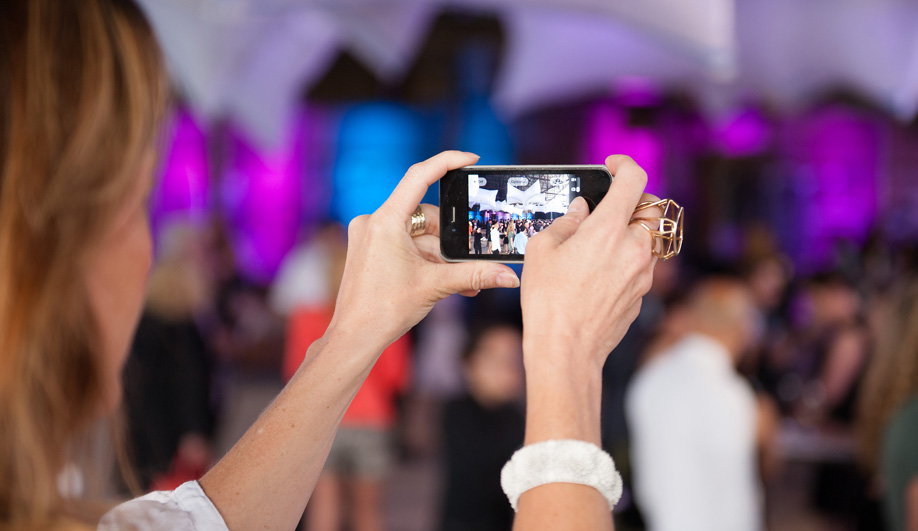 Over 400 guests filled the Evergreen Brick Works in Toronto. The beautifully restored former factory was further decked out for the night with a stunning display of inflated white bags, created by Mason Studio of Toronto; a ping-pong table made of Caesarstone and designed by Raw Edges of London; and the latest cars from the BMWi lineup.

MC Misha Glouberman kicked things off by commending everyone who entered the awards program, and he introduced to the stage the night’s guest of honour, designer Karim Rashid, who has a longstanding relationship with Azure’s founders, editorial director Nelda Rodger and publisher Sergio Sgaramella. Rashid described what he called “the phenomenal respect” Azure has enjoyed around the world since it started almost 30 years ago. He also noted he has entered the AZ Awards for the past four years, but has yet to take home a trophy.

Rashid’s opening remarks were followed by the big reveal, when the 13 winners and People’s Choice awardees took to the stage to receive their trophies, some having travelled to Toronto from as far away as Japan and São Paulo. 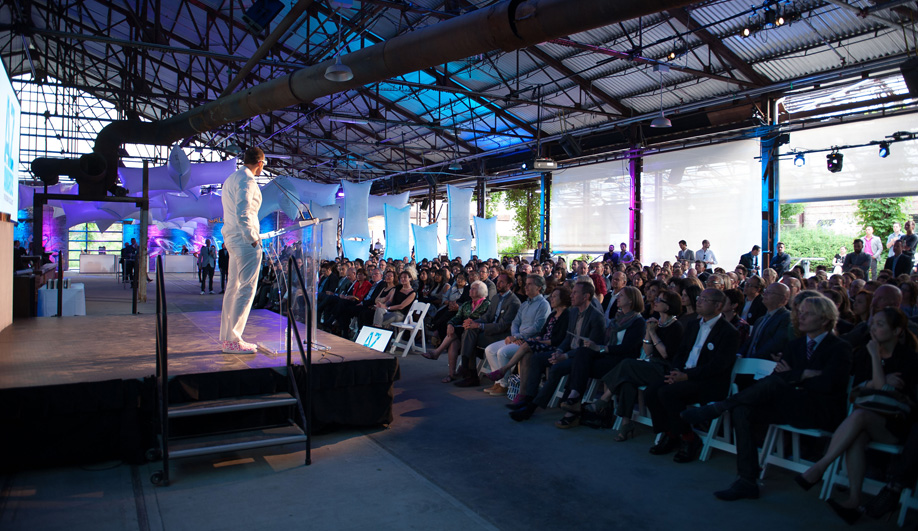 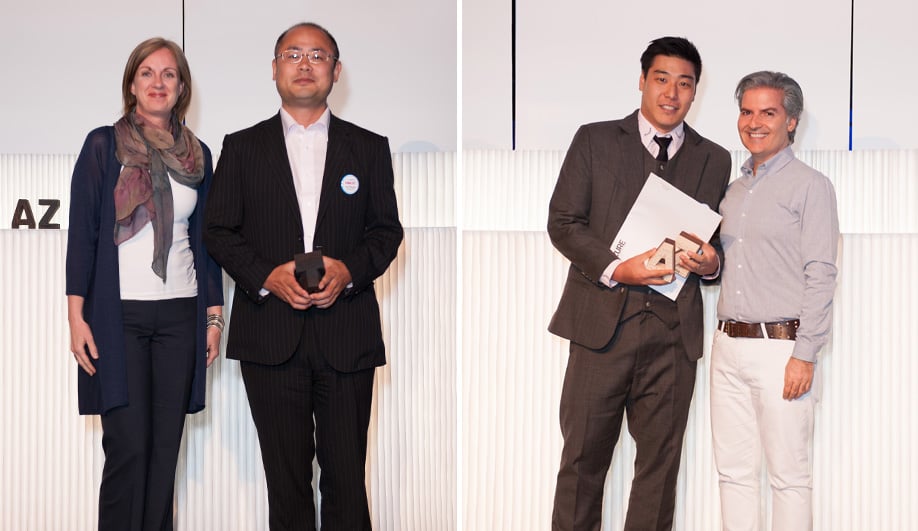 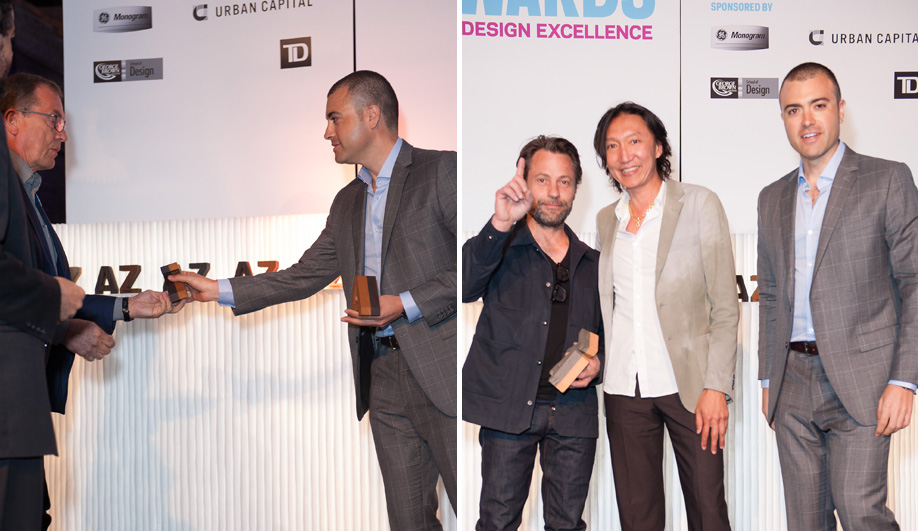 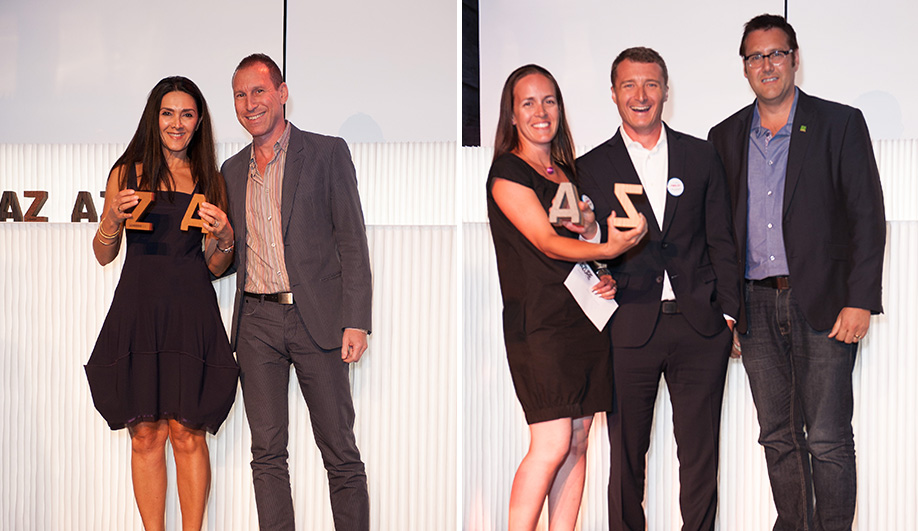 Mahasti Fakourbayat, director of REX Architecture in New York, accepted the award for Best Unbuilt Competition Entry, for a proposed media headquarters located in the Middle East. Professors Marie and Keith Zawistowski took home the A+ Student Award. The Zawistowskis head up a concept-to-build architecture program at Virginia Tech. 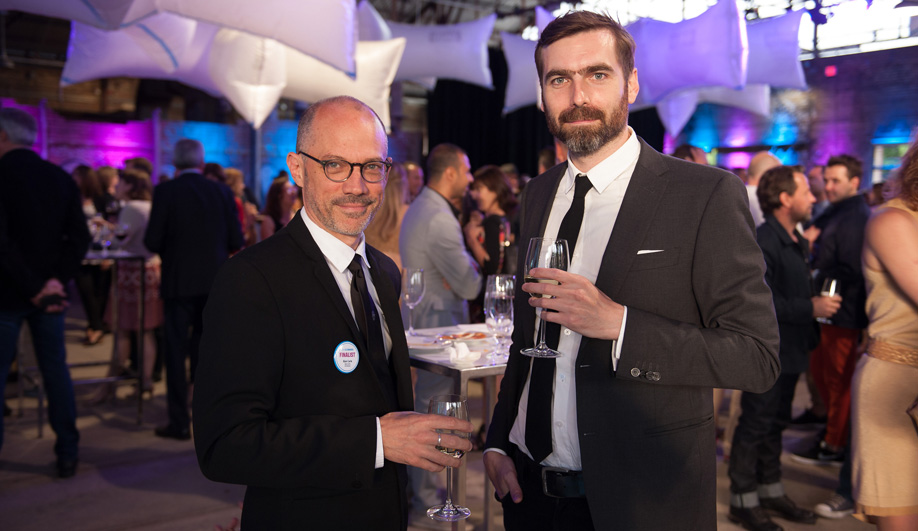 Alain Carle and Christian Aubin, both from Alain Carle Architecte in Montreal, were Merit Award winners for a residential project located in Wentworth-Nord, Quebec. 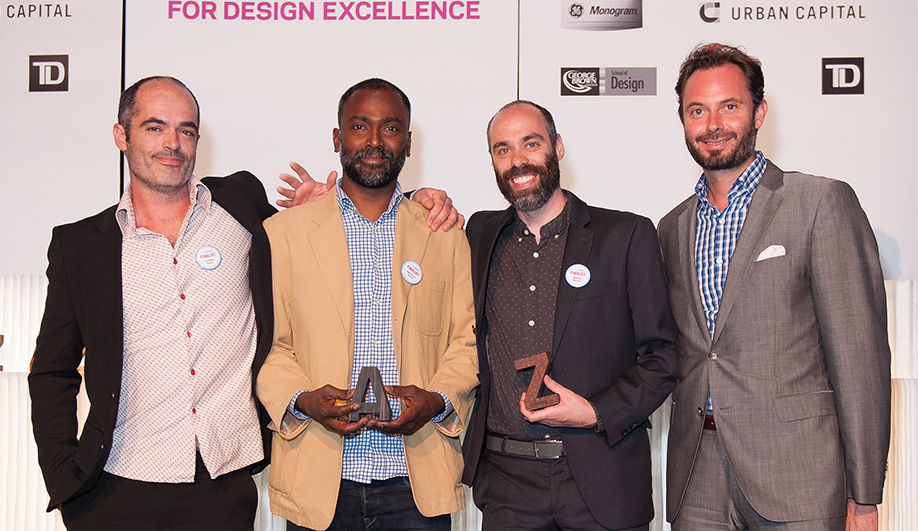 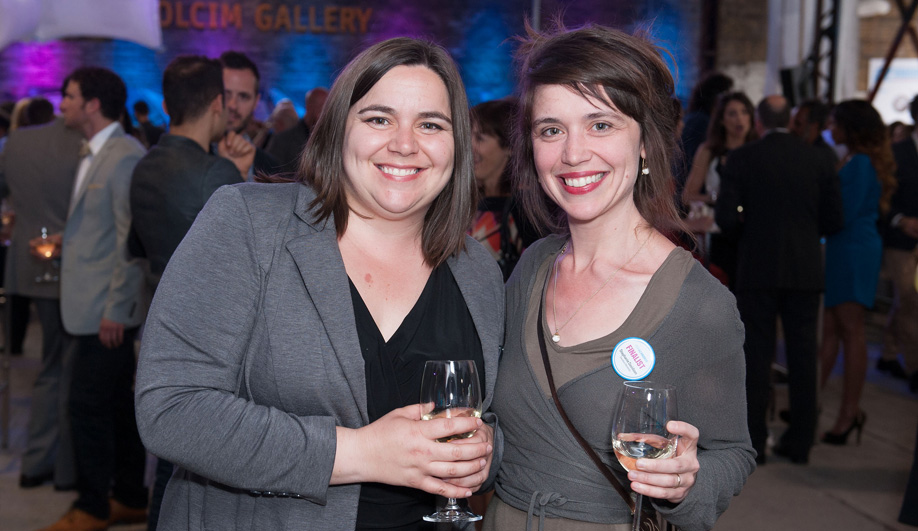 Finalist Stephanie Davidson (right) and her sister. Davidson is the co-creator, with George Rafailidis, of MirrorMirror – a pop-up festival tent with a mirrored gable roof that premiered at Ideas City in New York, as part of a thematic event sponsored by the New Museum. 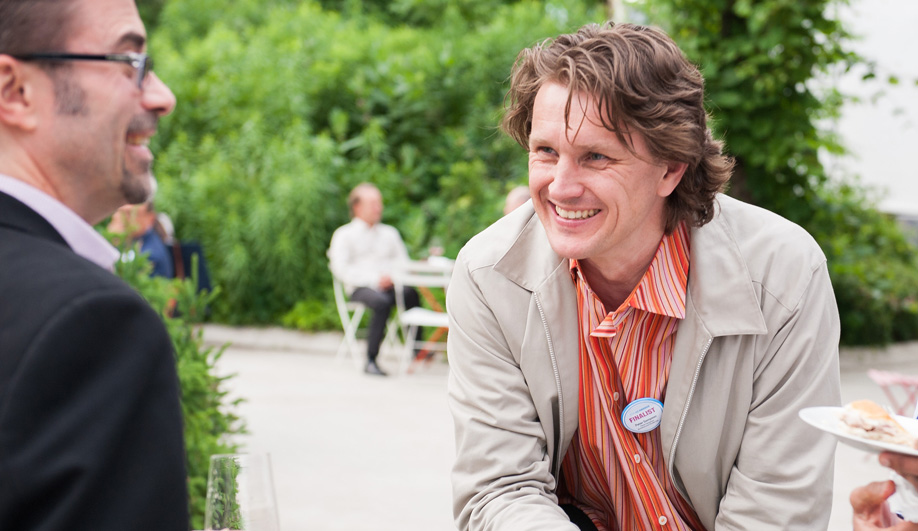 Architect Peter Sampson, who picked up a People’s Choice award for his firm’s public washrooms project in Assiniboine Park, Manitoba. 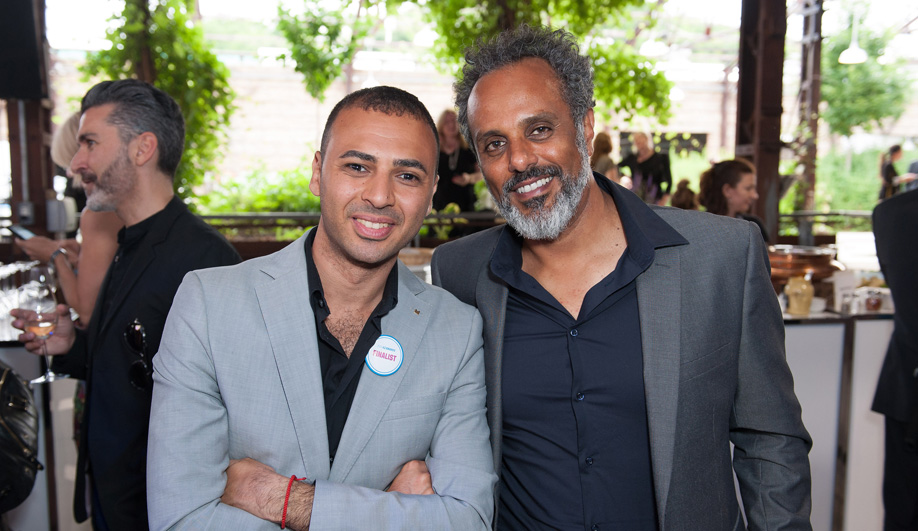 Rami Riad, of Moroso with guest. Riad was on hand to accept the People’s Choice selection for Bikini Island, a sofa designed by Werner Aisslinger of Berlin. 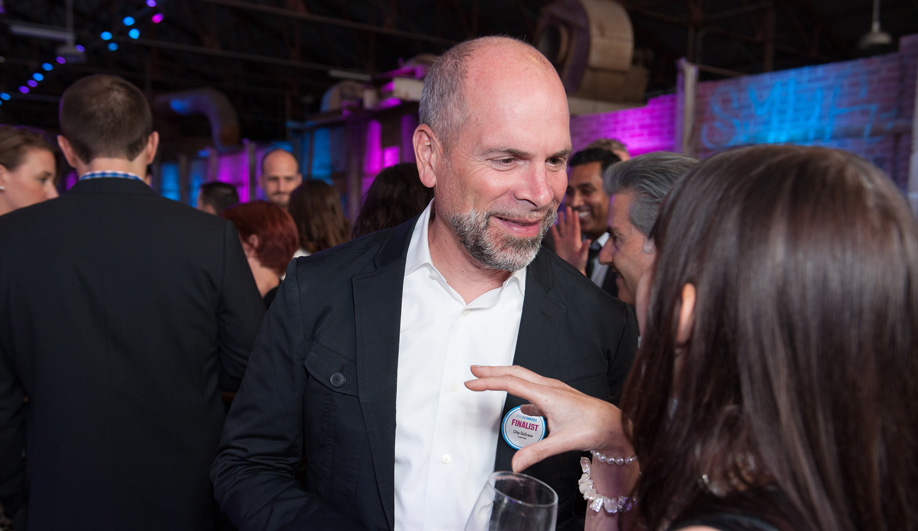 Chip DeGrace, of Interface, was on hand to accept the Best Product Design win. Interface collaborated with designer David Oakey on a collection of carpet tiles that reuse discarded fishing nets gathered from barrier reefs in the Philippines. 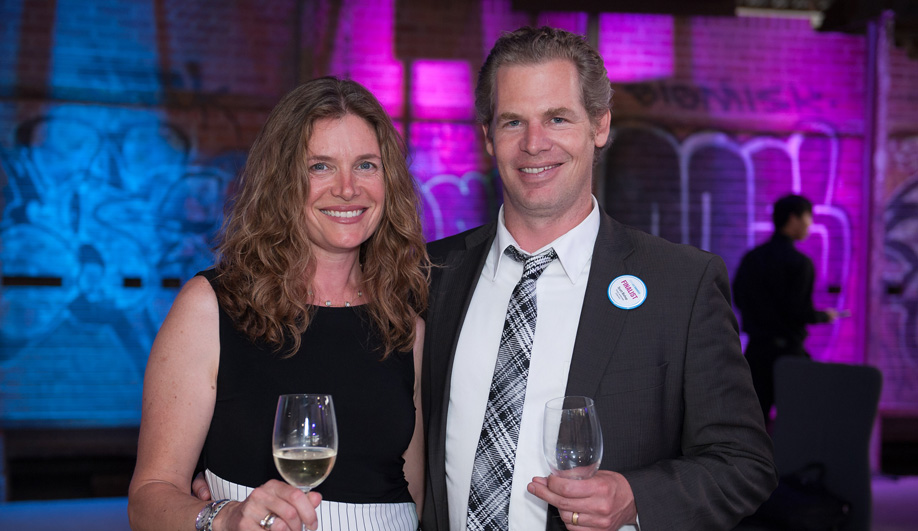 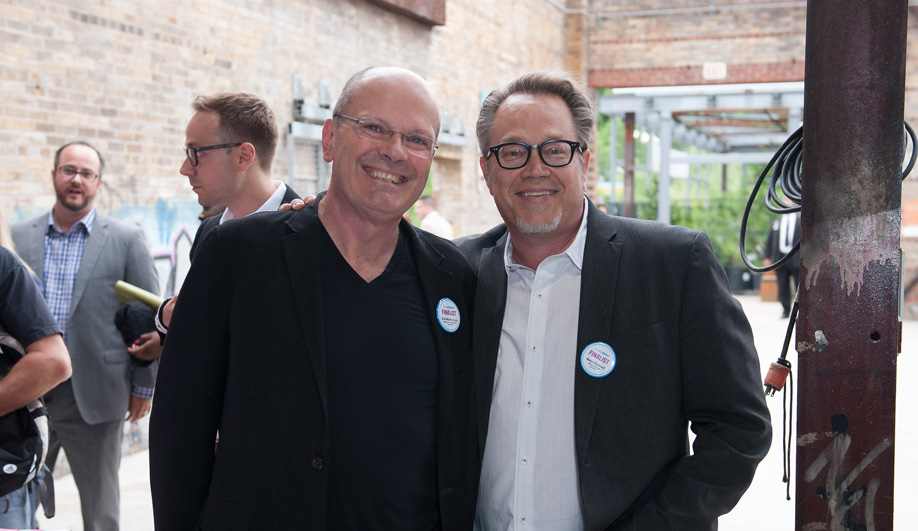 Architects Brian MacKay-Lyons and Marlon Blackwell were both winners. MacKay-Lyons took home a trophy for Best Residential, and Blackwell won in Best Architecture Over 1,000 Square Metres, for his firm’s Vol Walker Hall and The Steven L. Anderson Design Centre, in Fayetteville, Arkansas. 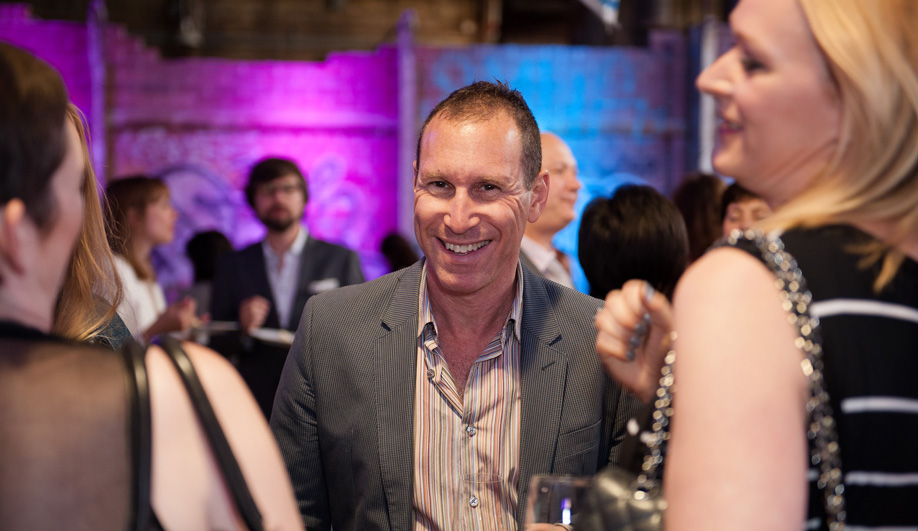 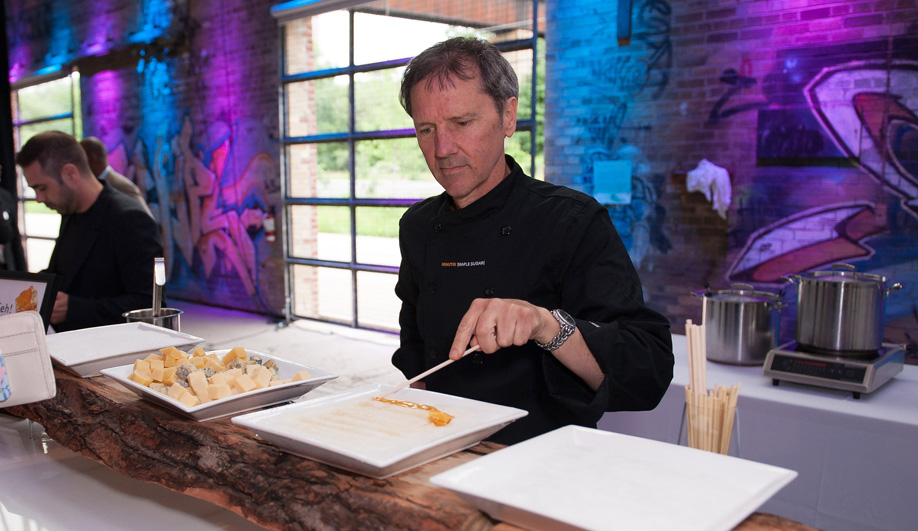 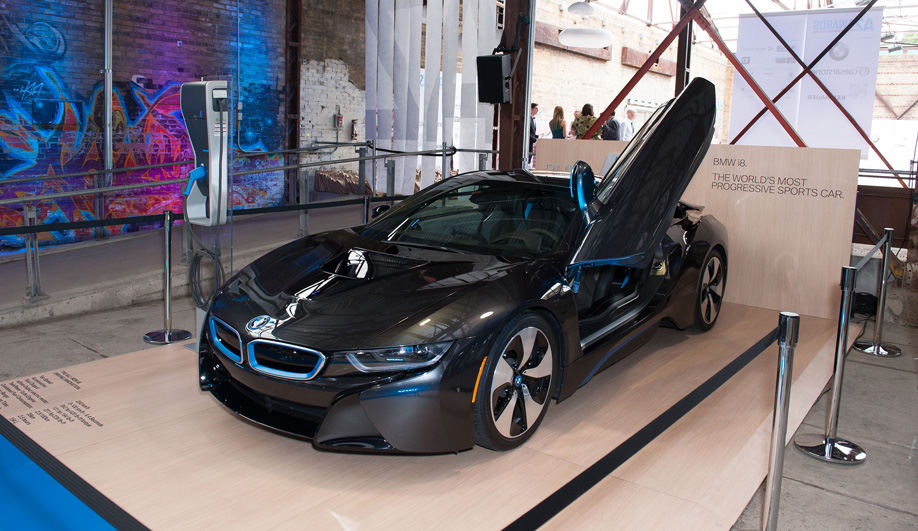 AZ Awards sponsor BMWi brought to the event some of its newest models, including the scissor-doored i8. 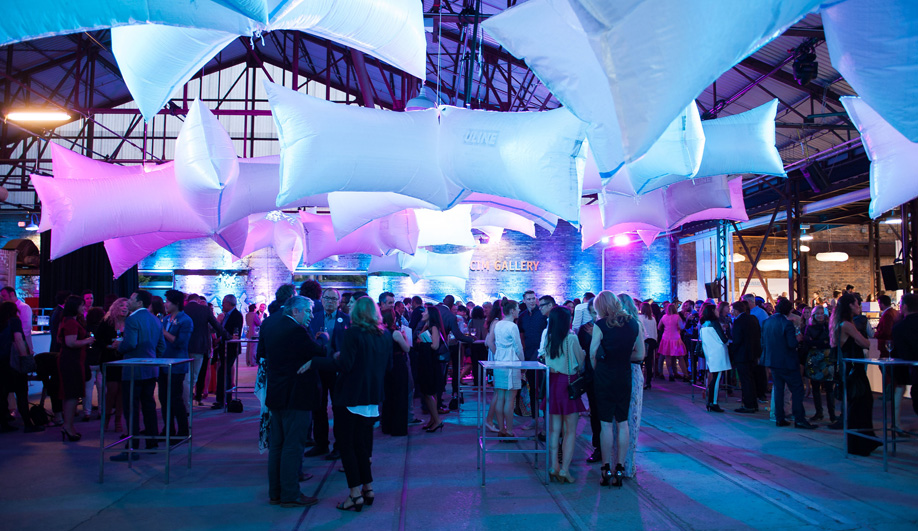 A display of inflated bags filled the space, creating a stunning cloudscape above the heads of guests. The one-night installation was created by Mason Studio of Toronto. 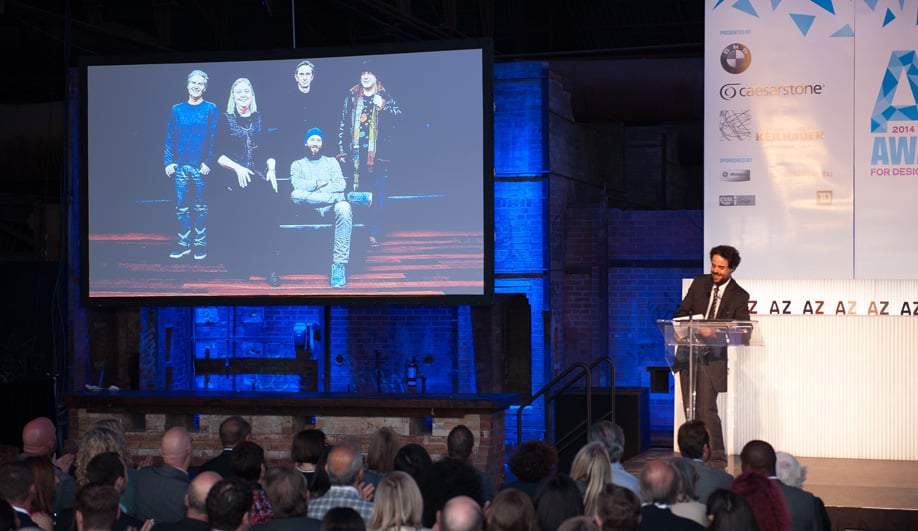 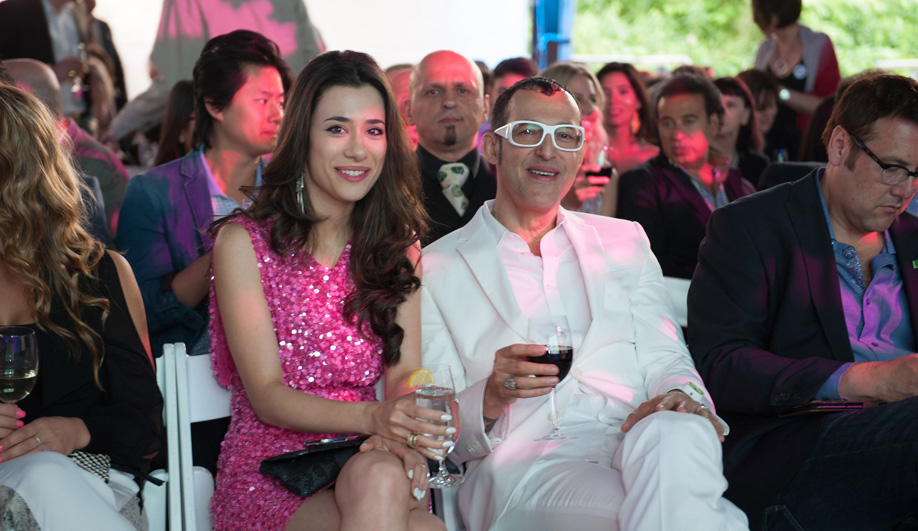 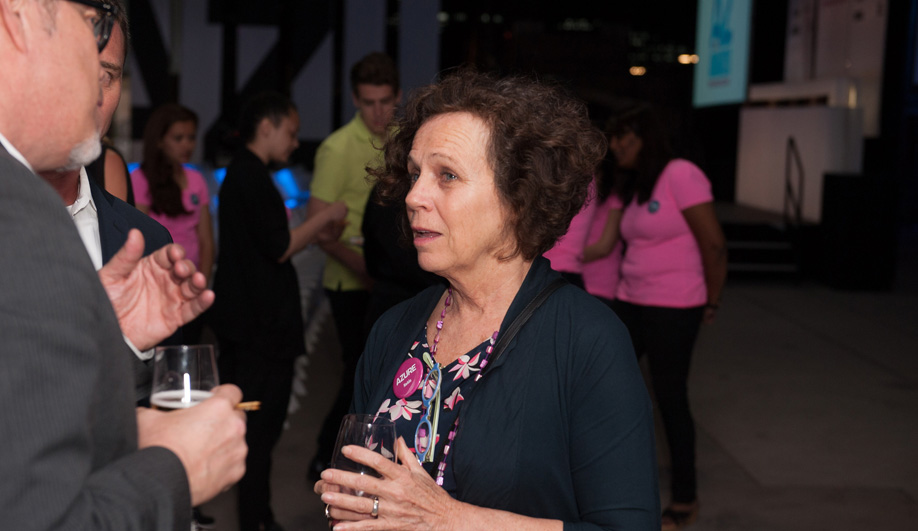 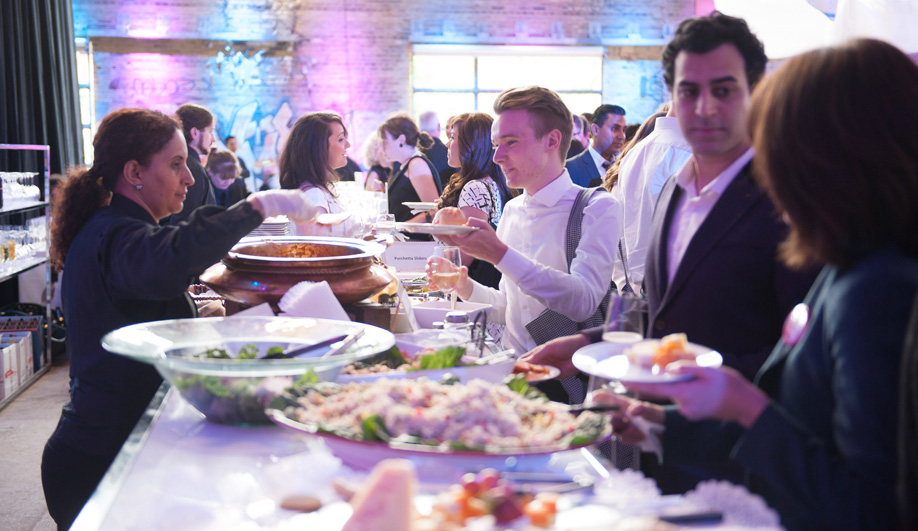 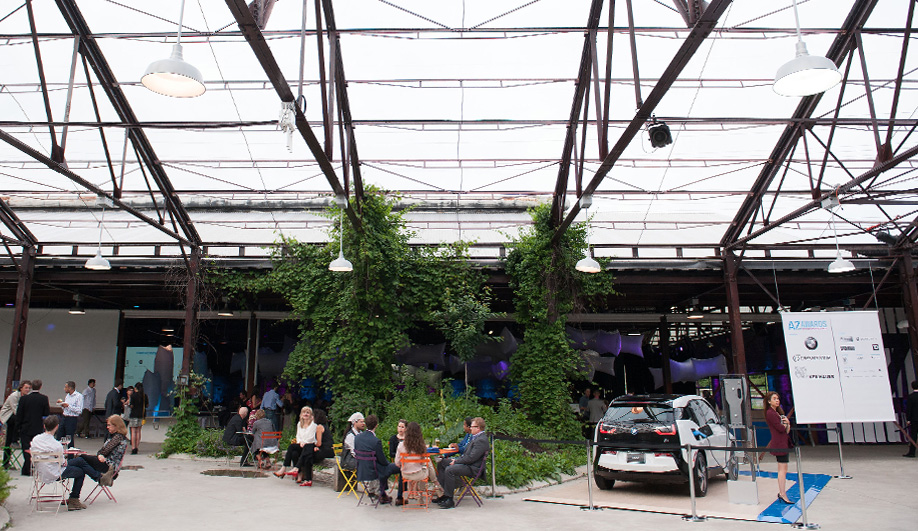 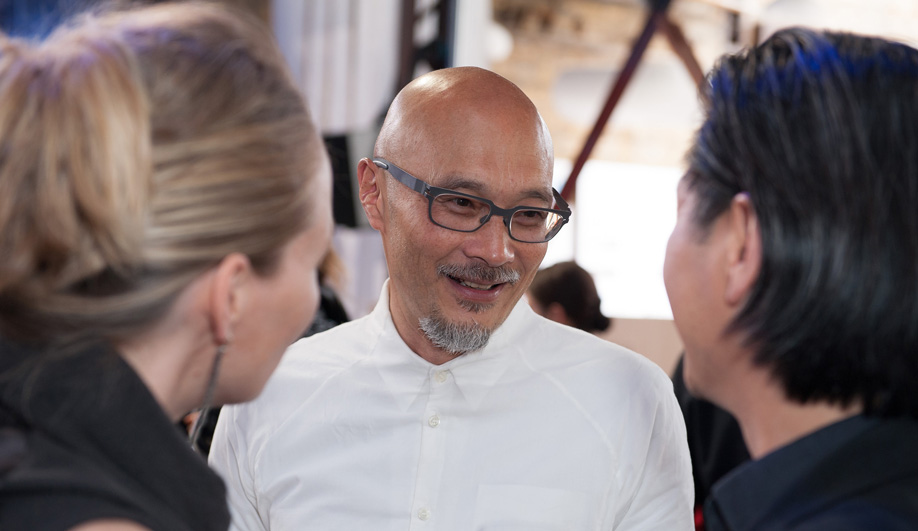 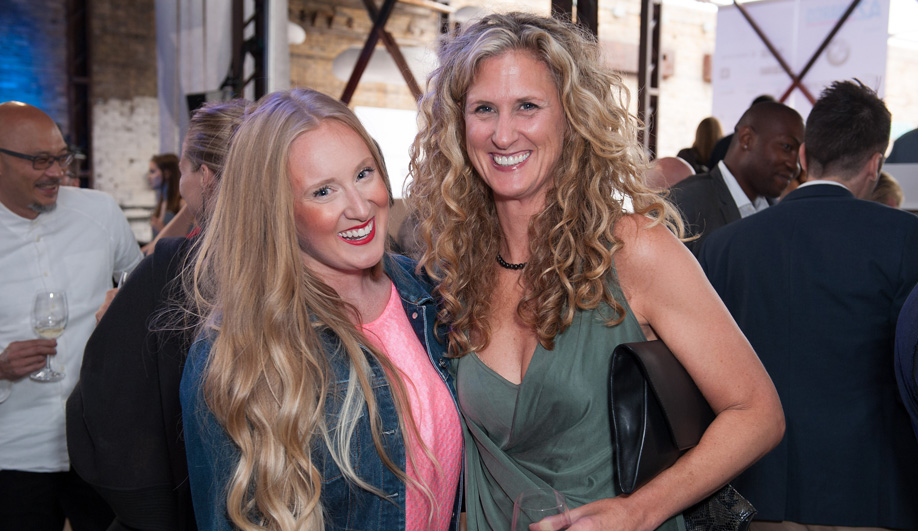 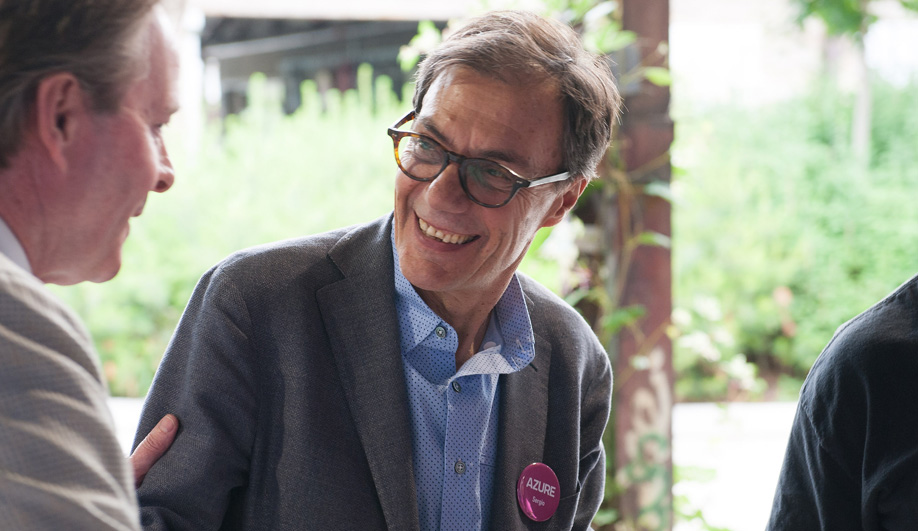 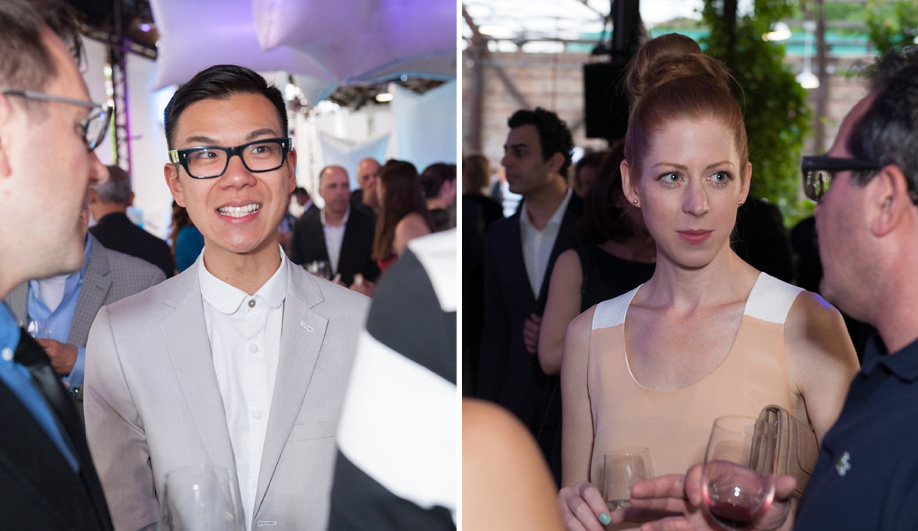 Stanley Sun and Ashley Rumsey of Mason Studio in Toronto.

See all 13 winners of the AZ Awards here.