Alain Carle Sculpts the Interiors of a Quebec Home

An awkward house is reborn as a sublime setting with planes that seem carved from stone.

Montreal architect Alain Carle sometimes finds himself wondering why travellers crave novelty. Why, for instance, do North Americans, who live in orthogonal cities, feel drawn to the twisting alleyways and canal-lined streets of Venice? “If you look at Venice on a map, it’s chaotic,” Carle says. “But somehow, visitors feel at ease there.” The best answer he can come up with is that people are adaptive. Within an astonishingly short time frame, we can turn a new artwork into an old favourite or a strange city into a beloved home. What’s more, we relish the challenge. Part of the appeal of novel experiences is the sense of possibility they give us. When the unfamiliar becomes familiar, we feel our world expanding.

Through his residential designs, Carle explores — and enlarges — the human capacity to acclimatize. His body of work doesn’t have a single aesthetic. It’s defined, rather, by what it rejects: the archetypal postwar house, with its large garages, front-end living spaces, and street-facing windows. “I don’t do cut-and-paste design,” he says. His La Héronnière residence in the Laurentians is an assortment of curves, right angles and horizontal planes atop a cluster of granite outcroppings, and La Charbonnière, in the Charlevoix region, northeast of Quebec City, opens like a telescope onto the St. Lawrence River. When Mathieu Ambroise, an entrepreneur, and his wife, Alexandra, who runs an online clothing store, met Carle at a party in Montreal and mentioned that they were in the market for a home, he advised them to buy something quirky.

In renovating and expanding an existing T-shaped house, architect Alain Carle repositioned the communal areas to enjoy generous outside views.

“He told us to look for an awkward house,” says Mathieu, “because they make the most interesting redesigns.” They settled on a T-shaped split-level in the garden suburb of Baie-D’Urfé, near the southwestern end of the island. The place had two volumes: a front-facing main space just one storey high and, abutting it at a right angle, a two-floor garage-and-bedroom unit with a windowless southern facade that blocked the sun.

Textured lime Marrakesh paint was hand-trowelled onto the walls to achieve their depth and texture. A similar finish was applied to all the built-in millwork, including the kitchen island.

The couple commissioned Carle to transform it into a fluid but monochrome space with expansive voids and off-white walls. “I grew up during the boom of suburbia in Chicago,” says Alexandra, “in a home filled with fancy rugs, grandfather clocks and marble everything,” She’d never loved the maximalist aesthetic, and wanted a house that derived its charm from architecture rather than ostentatious furnishings.

You enter the redesigned house through the side door — discreetly located on the north end of what was the original one-storey volume — and arrive in a dark foyer that takes you to the heart of the building. From there, you can head southward into the old garage, which has been gutted and turned into a double-height living–dining area; downward, where Carle excavated below grade to create an office and TV room; or upward, to the newly added second level — with bedrooms and a play space for the couple’s young son — which cantilevers at an odd angle toward the backyard.

The old garage was gutted and repurposed as a serene double-height living–dining area.

Odd angles are a recurring theme. In the front yard, the landscaping slopes toward the lower level, creating a recessed courtyard and making the office feel less like the basement it might have been and more like the luxurious ground-floor amenity it has become. And, in the double-height main space, there’s a single-storey seating area that juts out at a diagonal, altering the shape of the otherwise rectilinear volume.

Everything feels tweaked and torqued. Rather than your typical suburban home, with its rational, front-to-back arrangement, this one radiates, starburst-like, in all directions. It also has its share of surprises: the kitchen is adjacent to the main space but hidden behind folding doors, and the master bedroom is tucked discreetly atop the kitchen.

Every staircase in the home has a sculpted quality, with turned-edge rails that appear handhewn and -polished.

But despite the irregular layout, the atmosphere is tranquil. The concrete floors and hand-trowelled plaster walls evoke tactility and cleanliness. The accents and millwork — arched doorways, ovoid countertops and dining tables, and a children’s bunk bed with half-moon openings — have similar matte finishes. They don’t feel imposed on their environment; they seem, rather, to have been carved into its bedrock. And each opening has clearly been chosen for its calming effect, from the horizontal windows in the main space that look out onto a row of mature cedars to the second-floor skylight that sends natural light cascading throughout the stairwell.

With arched openings to his bunk bed, the clients’ young son has the most playful room in the house.

In one bathroom, an arch establishes a sense of deep privacy around the bathtub while also recalling the whimsical cutouts in the son’s bedroom.

When Alexandra walks through the abode, she senses a story unfolding: a drama of changing moods and sudden revelations. “I feel hugged when I arrive at the entranceway,” she says. From there, perhaps, she’ll head downstairs or into the main room, where the space opens dramatically. Or she’ll walk upstairs and stand beneath the skylight: “I’ll see clouds taking form against the calm blue sky,” she says. Alexandra and Mathieu have been in the home for over a year, but the sense of novelty hasn’t worn off. “To me, this isn’t just a house,” she adds. “It’s an experience.

Located in a suburb of Montreal, the house was chosen for its non-orthogonal layout, upon which the redesign ingeniously builds. 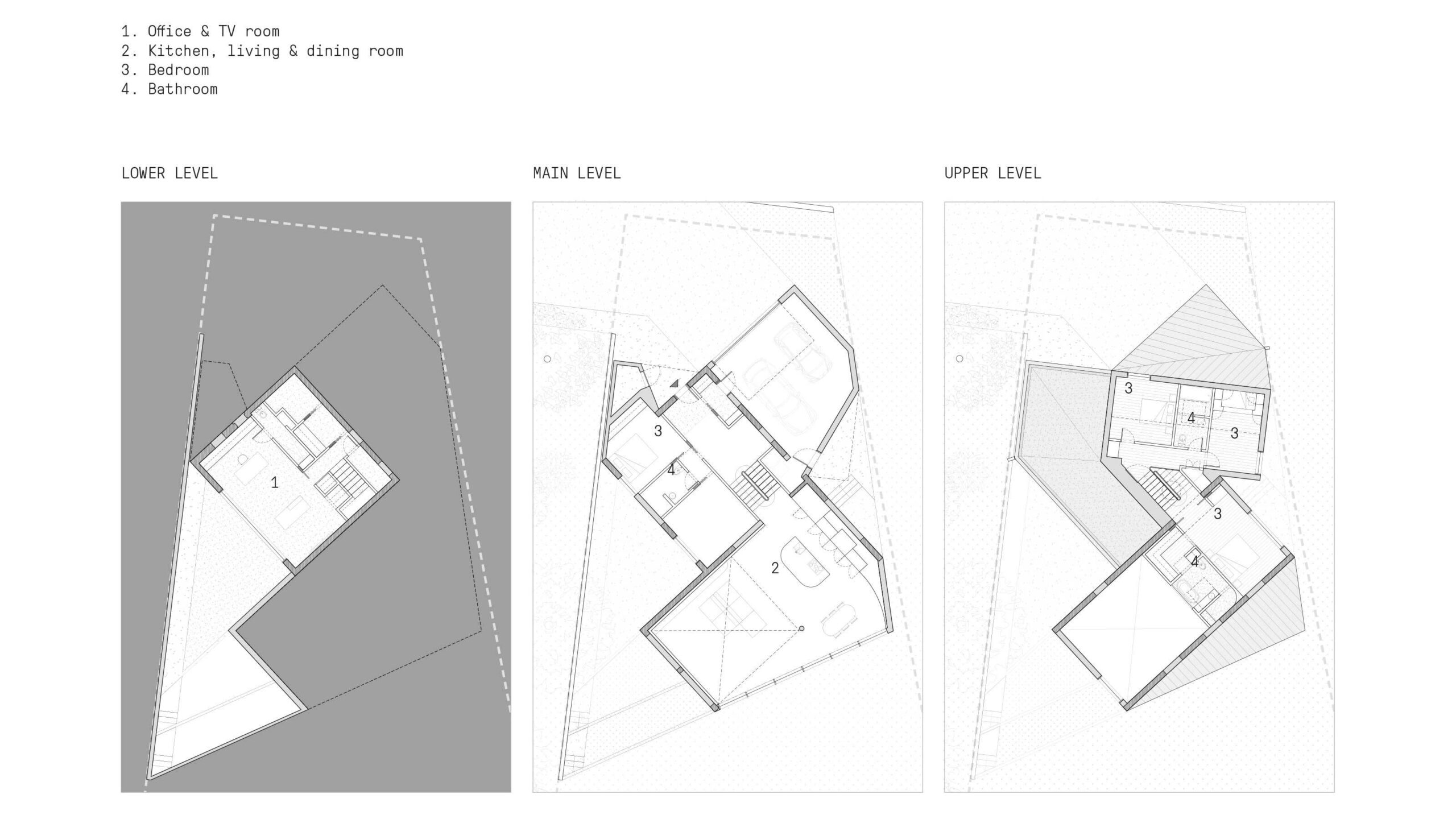 An awkward house is reborn as a sublime setting with planes that seem carved from stone.