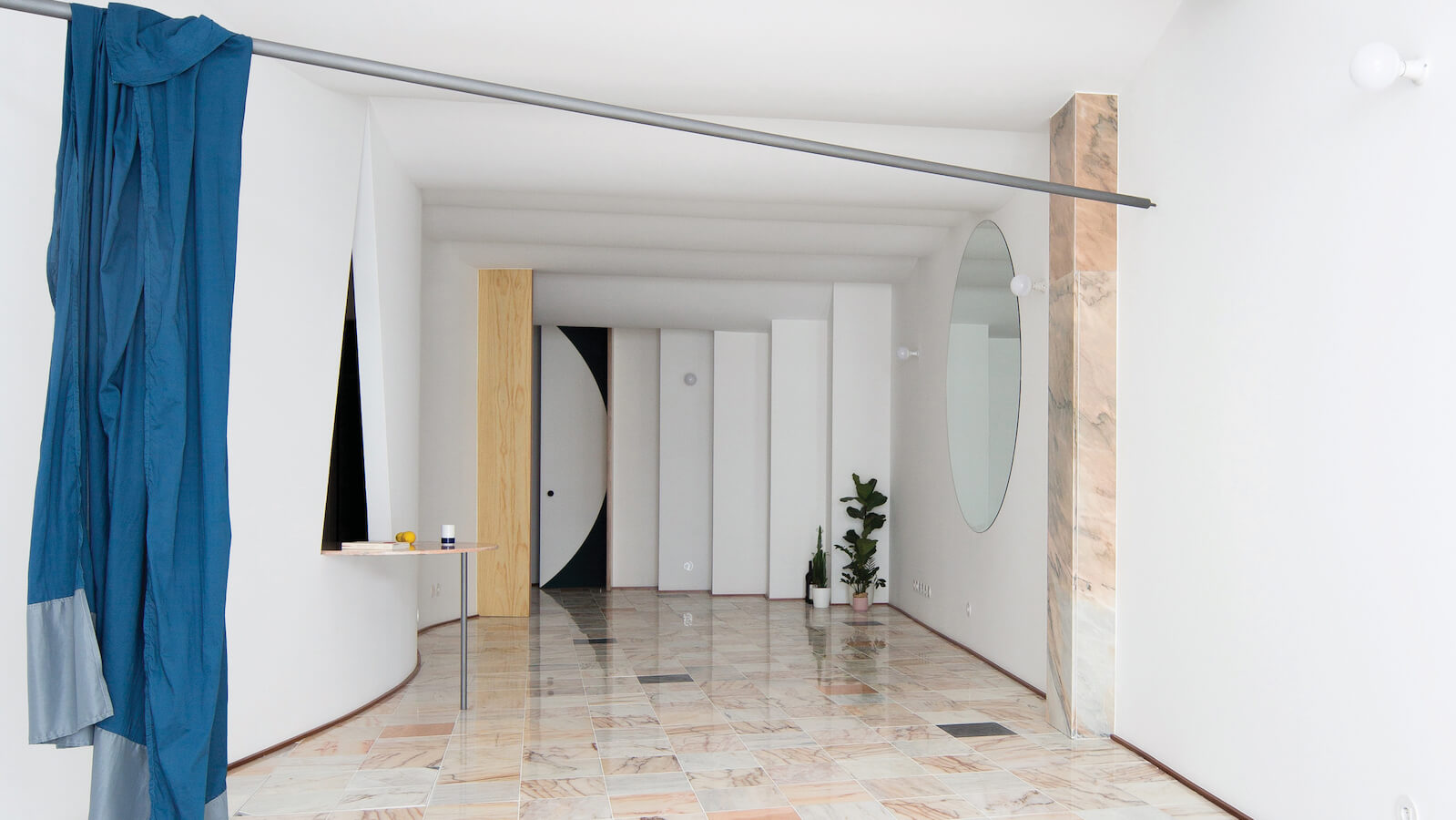 From Collages to Conceptual Living Spaces: A Conversation with Porto’s Fala Atelier

Whether renovations or new constructions, Fala Atelier’s projects are marked by their colourfulness, formal invention and humility. Since its founding in 2013, the studio has built an exemplary series of houses on small, often irregular sites in Porto and its surroundings, negotiating constrained conditions with aplomb. Curving walls that produce unexpected interior views, vibrant materials that confound expectations and mirrors that enlarge confined spaces: such are the devices that Fala Atelier uses to respond imaginatively to quotidian settings. In parallel, it has embraced architecture’s imagistic dimension, gaining renown for its digital collages that flatten its projects onto the screen or the page.

In much of its work, Fala privileges spatial affect over demonstrative functionalism. This is clear in the Suspended House (2020), where a massive concrete column penetrates the building’s levels only to hover above the ground floor, undermining its traditional place in architecture’s tectonic lexicon and appearing instead as an object, a sort of upside-down menhir. Another project, the House Along a Wall (2018) — a garage transformed into a space that could serve as an apartment, a shop or a gallery — demonstrates how the firm also resists proscriptive arrangements. 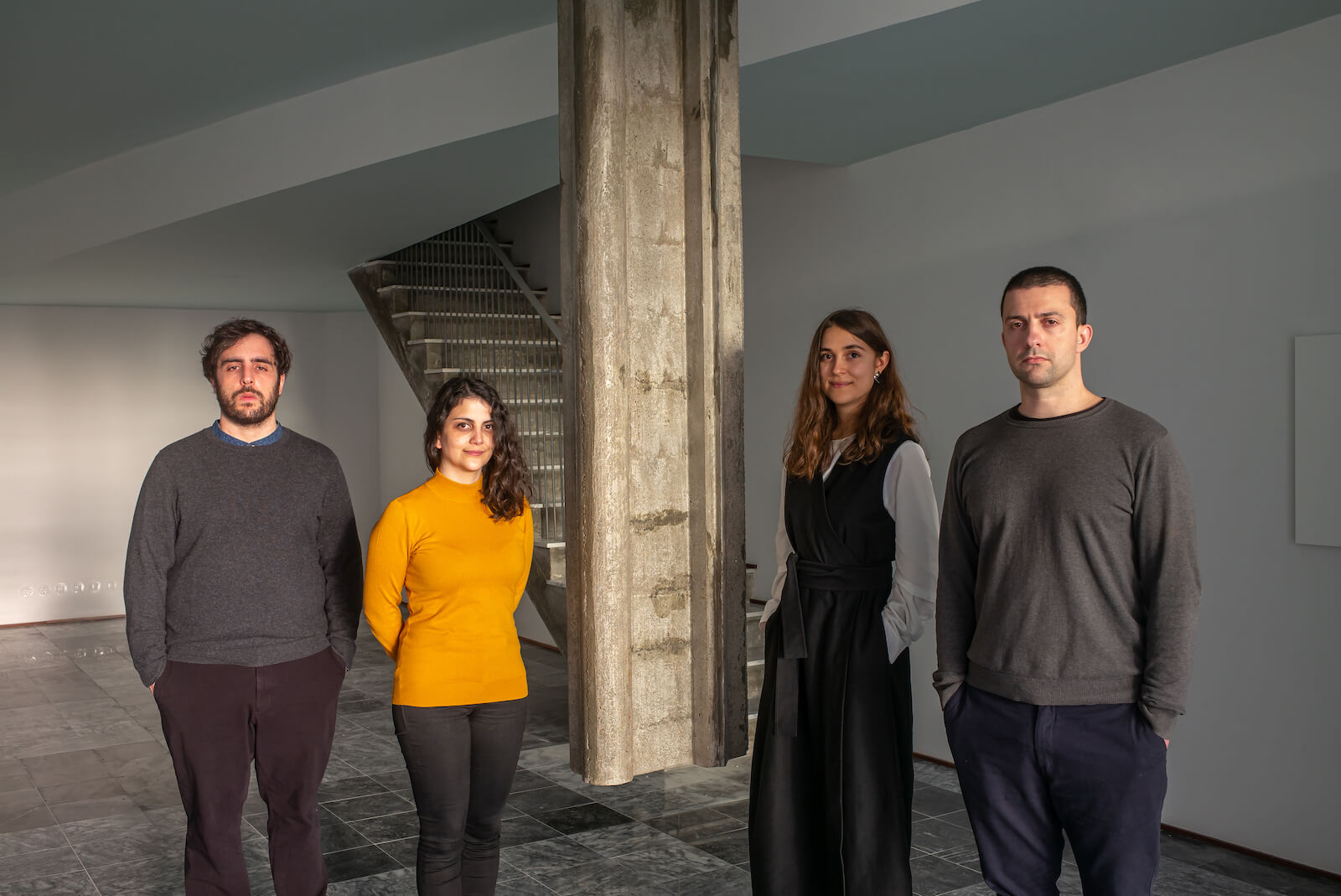 But Porto is rapidly changing. From the end of the last recession until the onset of the current pandemic, the small Portuguese city found itself “in,” with Ryanair flights bringing throngs of tourists to pack streets that previously felt deserted. The resulting construction boom created opportunities for young firms while changing the city’s character, and the small shops and garages that fascinate the architects are now disappearing, as are derelict buildings for them to renovate.

Fala’s principals are used to shifting terrain. Filipe Magalhães, Ana Luisa Soares and Ahmed Belkhodja founded the firm, and Lera Samovich became partner this year. While Magalhães and Soares are Portuguese, Belkhodja hails from Switzerland and Samovich is from Russia. They belong to a restless generation shaped by freedom of movement and financial crises. This global vision and their young age have given the partners the room to express themselves in a city dominated by the brilliance of an earlier generation who came to prominence after Portugal’s 1974 Carnation Revolution. We caught up with Lera Samovich to find out more about the studio’s motivations and ambitions.

As an architect trained in Moscow, what does Porto, the city where Fala Atelier is based and where most of your projects are located, mean to you?

It took me a while to get used to Porto after living in Moscow for almost 10 years. One has to get familiar with local typologies, materials, all kinds of peculiarities. There is an unhealthy fascination with the old; certain new buildings try to act as if they were built 150 years ago. There is a notion of Siza and Souto de Moura in the air. There is a fragmented suburbia. And plenty of “ugly ducks,” awkwardly beautiful buildings from the 1960s, ’70s and ’80s.

Do certain typological features strike you as distinctly “Porto”?

The city centre is quite dense. It is made of long, narrow plots called ilhas (islands), often with shops and garages on the ground floor that have the potential to become houses. The buildings are stuck to each other, there is never a side facade, only the front and the back. The landscape is irregular, with lots of ups and downs. There is the river and the ocean. But the majority of our projects are in the suburbs, which have none of the above and are very dispersed, fragmented, banal and strangely charismatic areas. 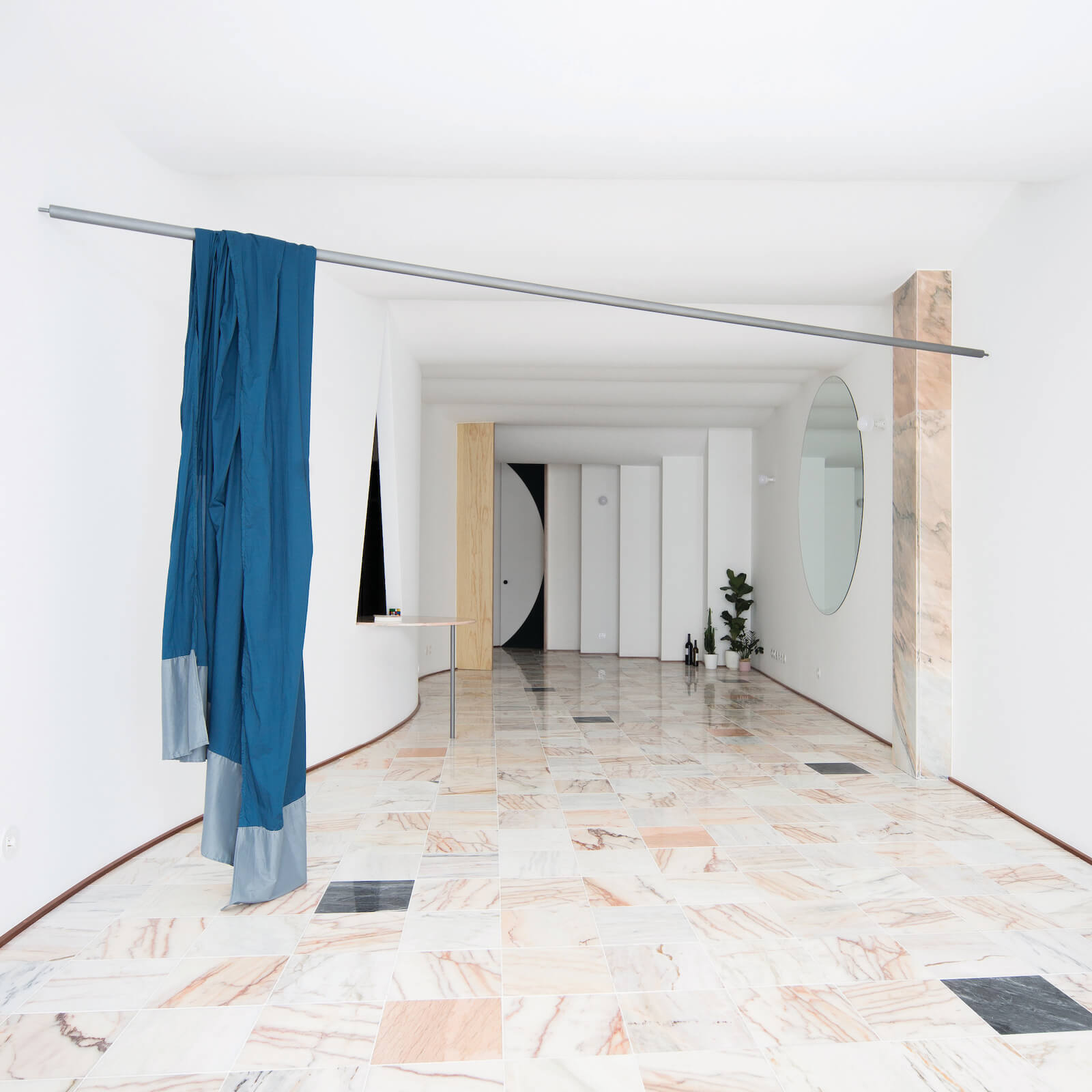 Double vision: The interior of the Fireworks in White home (above) and the collage — a critical aspect of Fala’s creative process — that led to it (right). 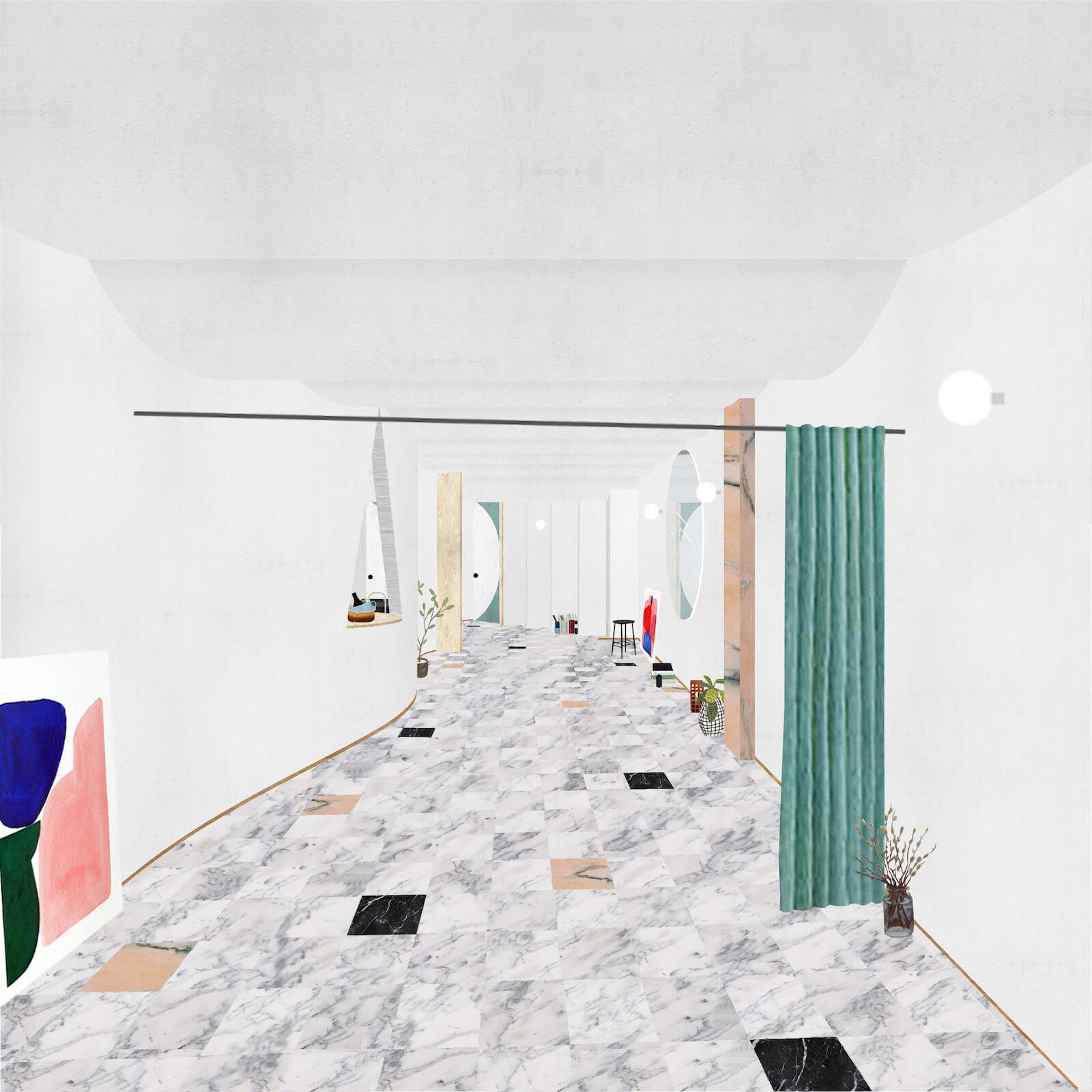 With a wavy ceiling, “proud doors” and a bold curtain, the interior is what the firm describes as a composition of “fearless geometries.”

As someone coming from elsewhere, was there a book, a film or perhaps a photograph that gave you an idea of the city, that captures its “essence”?

The most interesting part of Porto is what is happening outside the city centre, in the backyards, behind the  monumental street facades. I remember liking photographs of two buildings by Siza: Bairro da Bouça, with its sequence of courtyards, and Bairro de São Victor. It is fascinating to see how these buildings are lived in and occupied. One can see pots, plants, “welcome” carpets, nasty roller shutters, tinsels and decorations from yesterday’s backyard party. Life finds its way within repetitive elements, plain surfaces and defined perimeters.

Which architects do you admire?

Most of our references come from Japan. We have an endless fascination for a period from the 1960s to the 1990s. Kazuo Shinohara, Itsuko Hasegawa and Toyo Ito are the obvious heroes. The latter’s House in Kamiwada  juxtaposes a banal concrete box with a fluid interior space, a labyrinth inside a cube. We admire the ambiguous function of the spaces and the way in which Ito tries to reinvent every element of architecture. Outside of Japan, we enjoy Peter Märkli, Mario Botta, Robert Venturi and Denise Scott Brown. 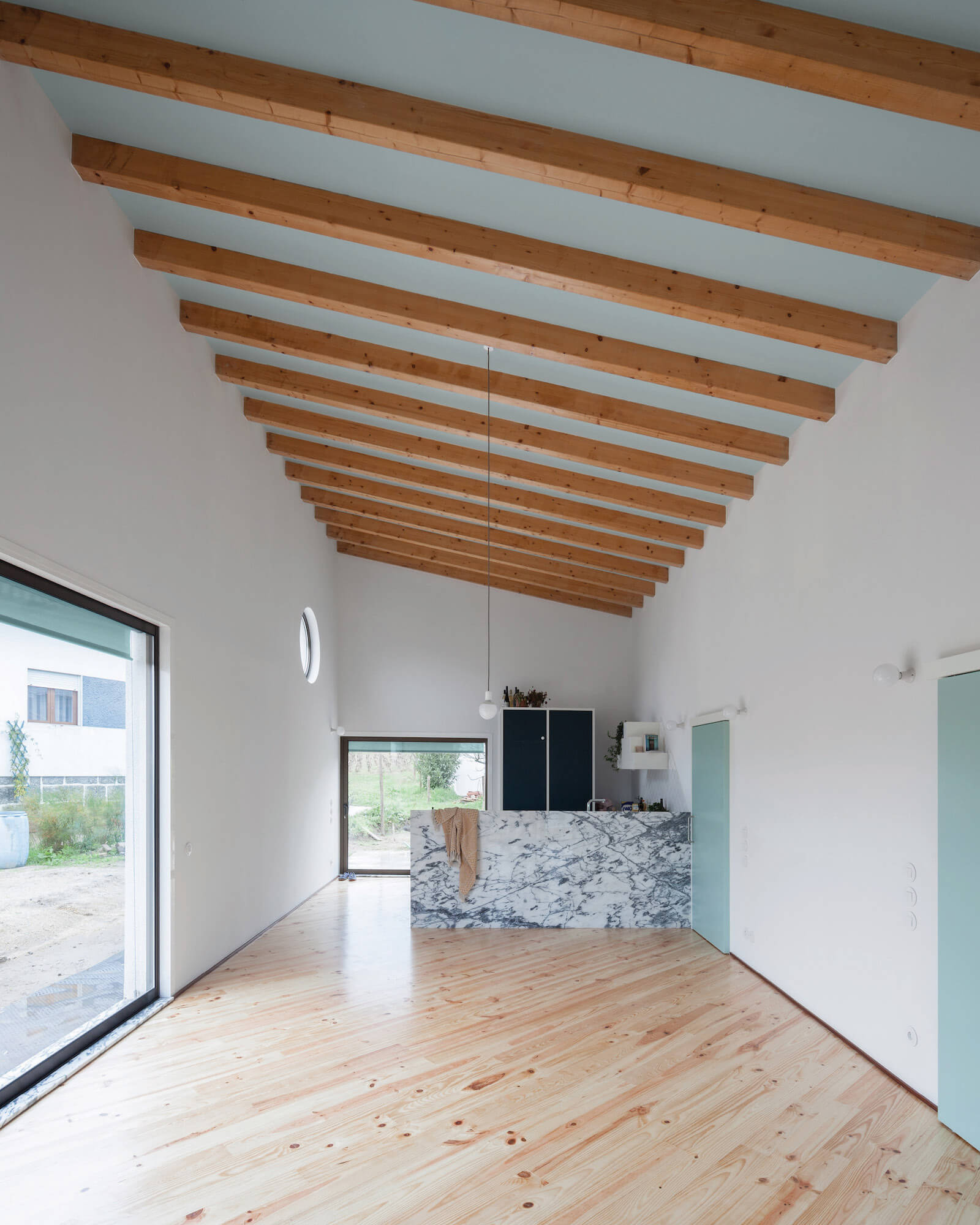 House Under a Big Roof is defined by its ceiling beams and serene palette, both in its realization (above) and its collage (right). 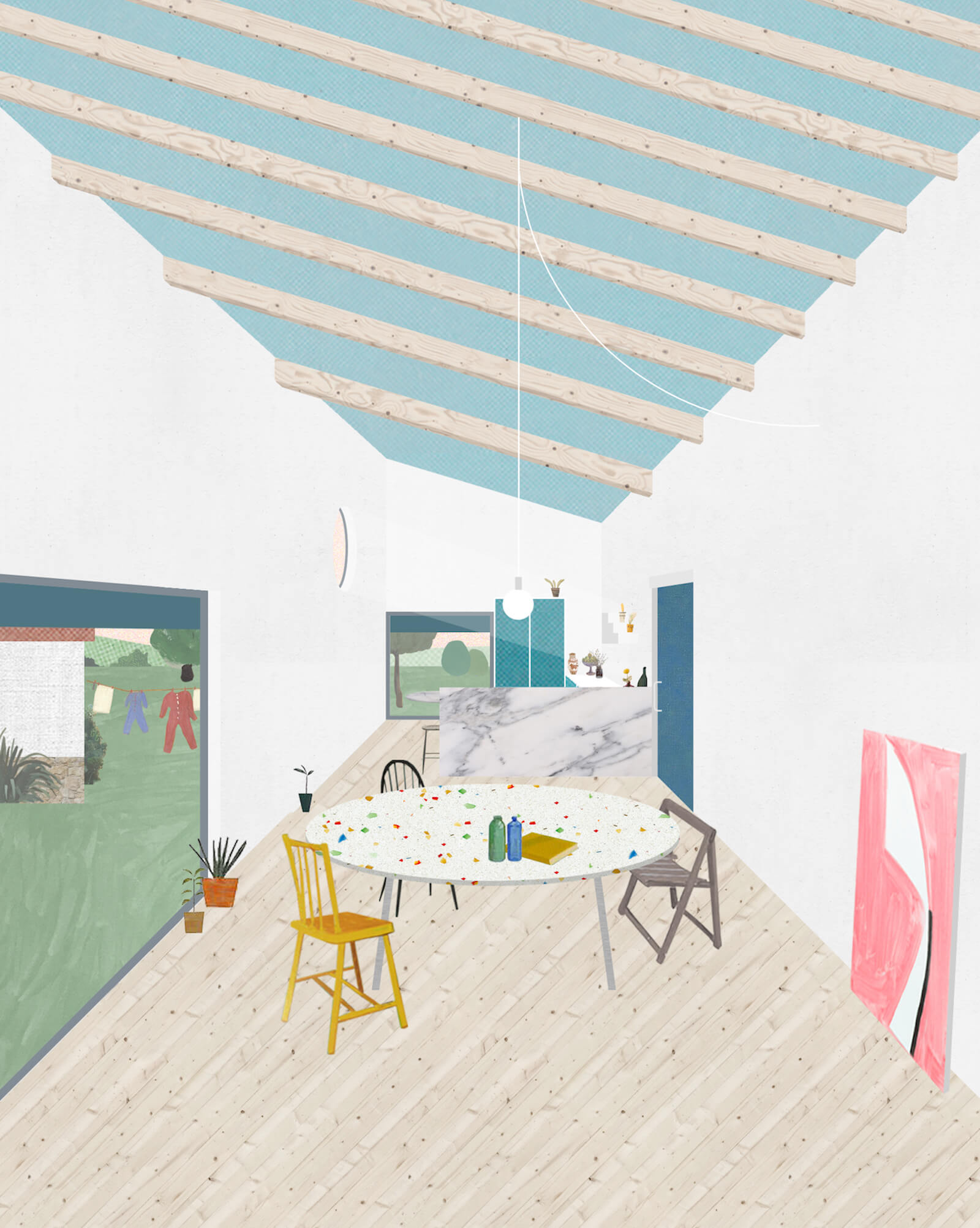 Fala Atelier has an intriguing origin story: Filipe Magalhães and Ana Luisa Soares worked and lived together for a year in Tokyo’s Nakagin Capsule Tower. Do you see this experience of utopia at a domestic scale in Fala Atelier’s work?

That experience certainly had an impact. It encouraged us to experiment more, to challenge accepted conventions and typologies, and to not be afraid of houses that are too small, too narrow, or difficult in any way.

What are Fala Atelier’s ambitions?

The atelier crafts intellectual objects that sometimes get built, projects that are meant to disturb given recipes, to refuse predetermination. We propose spaces that escape univocal readings, environments without meanings, but of seductive trouble. Facades make faces, columns fly, kitchen extractors and cat doors become main actors. Misalignments become matters of pride. The architecture is one of deliberate empathy, fragility and imperfection. It is populated by a crowd of elements that can never be reduced to a symbolic meaning or to their function. 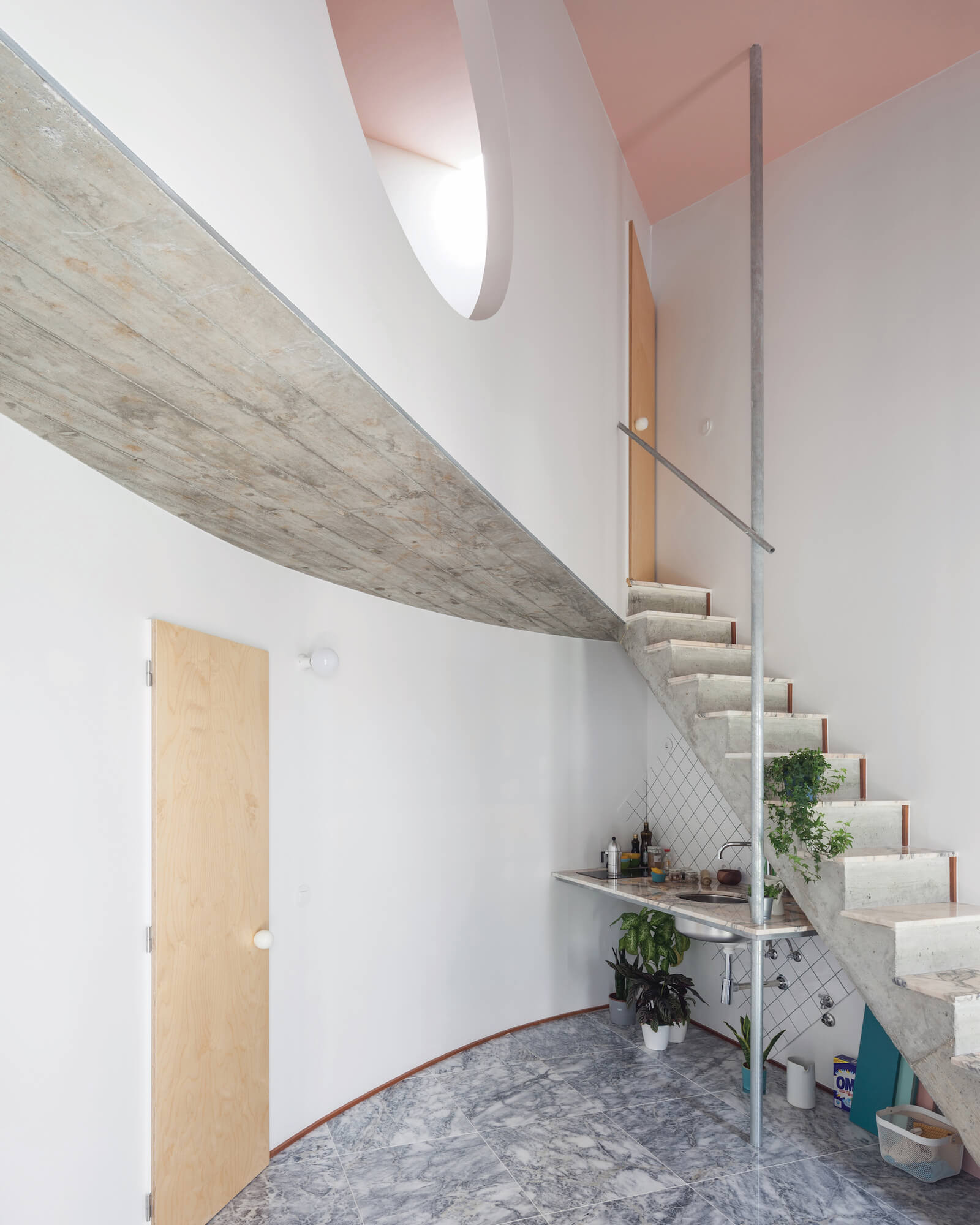 Six Houses and a Garden is exactly that. Inside, the interiors juxtapose curves and angles, white walls and concrete.
DOMESTICITY

For you, what is a house?

A house is certainly a small, compact object; usually it has a difficult client, a character, a personality even. It addresses issues of private and public, open and closed. We don’t really have any big ideology or agenda when it comes to housing. We know that houses can happen in former shops and garages, in plots that are tiny, too narrow or too steep. A house might not have a proper kitchen, a column can be in the way, and rooms can be interchangeable.

What are the desired qualities of the domestic spaces you design?

We are interested in spaces and volumes that are both neutral and complex. The complexity comes from irregular outlines, slanted surfaces, multiple intersections and juxtapositions.

How do you feel about the relationship between spaces for living and spaces for working? Are they interchangeable?

Most of our projects offer spaces that can be anything. Bedrooms can become offices, kitchens are reduced to a surface of marble, a car can be parked in a living room, and a living room can be turned into a gallery. Fala Atelier’s own studio is a renovation of an irregularly shaped building, with two apartments upstairs. Having ourselves as a client was funny, but we had to control our wild ideas. For one of our partners, the proximity of work and home is a delicate convenience, for others it might seem dangerous! 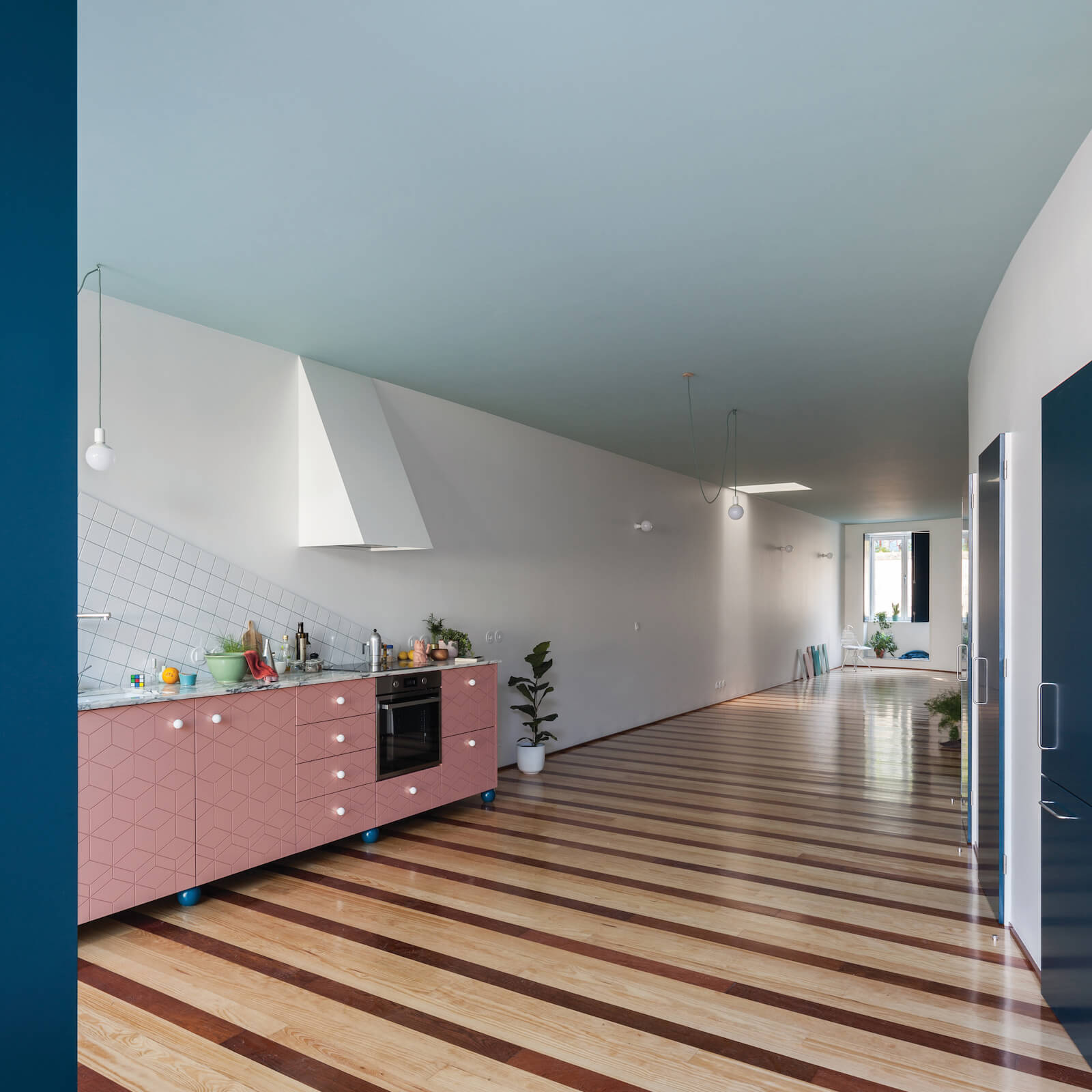 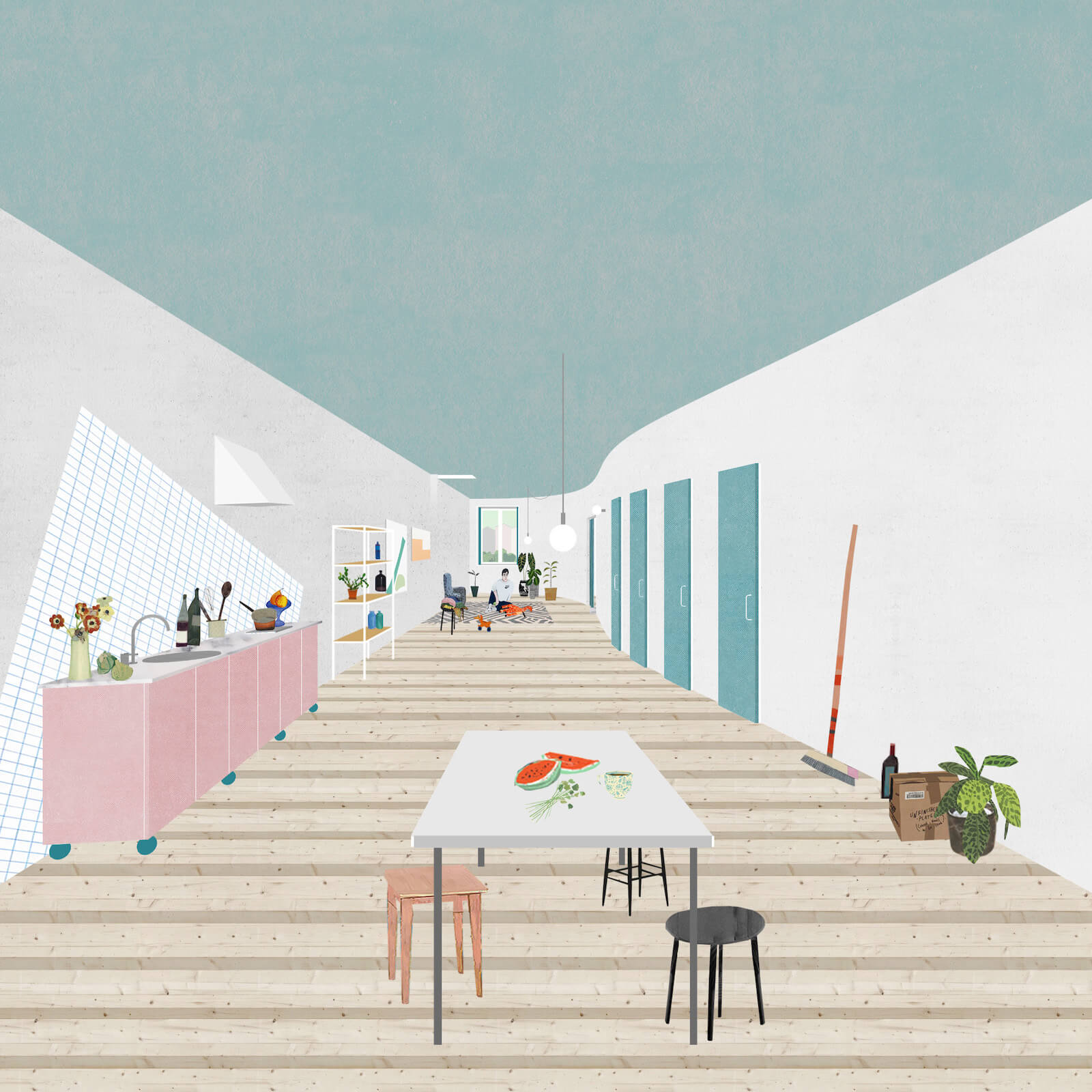 What is the role of images in your work?

We make use of an expanding variety of techniques, all ultimately flattened to bidimensional images: drawings of many kinds, collages, photography, computer models, physical models (photographed), even bad 3D computer renders. We don’t refuse anything. Collages and renders constitute different kinds of precision. The building and its construction site are conceived as representations of the project as well. They are documented via photographs. In our age, new worlds are built image by image, or drawing by drawing. Paper covers rock.

What are influences that led Fala Atelier to draw the way it does? Are you fans of David Hockney?

We are interested in David Hockney, Nathalie Du Pasquier, Jonas Wood, Tim Eitel, Ellsworth Kelly and Robert Mangold. But I wouldn’t say that artists are our main references. We mostly look at drawings and projections by other architects. To give a few examples: wireframe drawings by Kazuo Shinohara, single-line axonometrics by Itsuko Hasegawa, layered elevations by Takefumi Aida.

All of the above are our friends and heroes. There is an undeniable commonality, yet the image production in every office changes and takes turns. There are many peculiar directions and intuitions within the group. 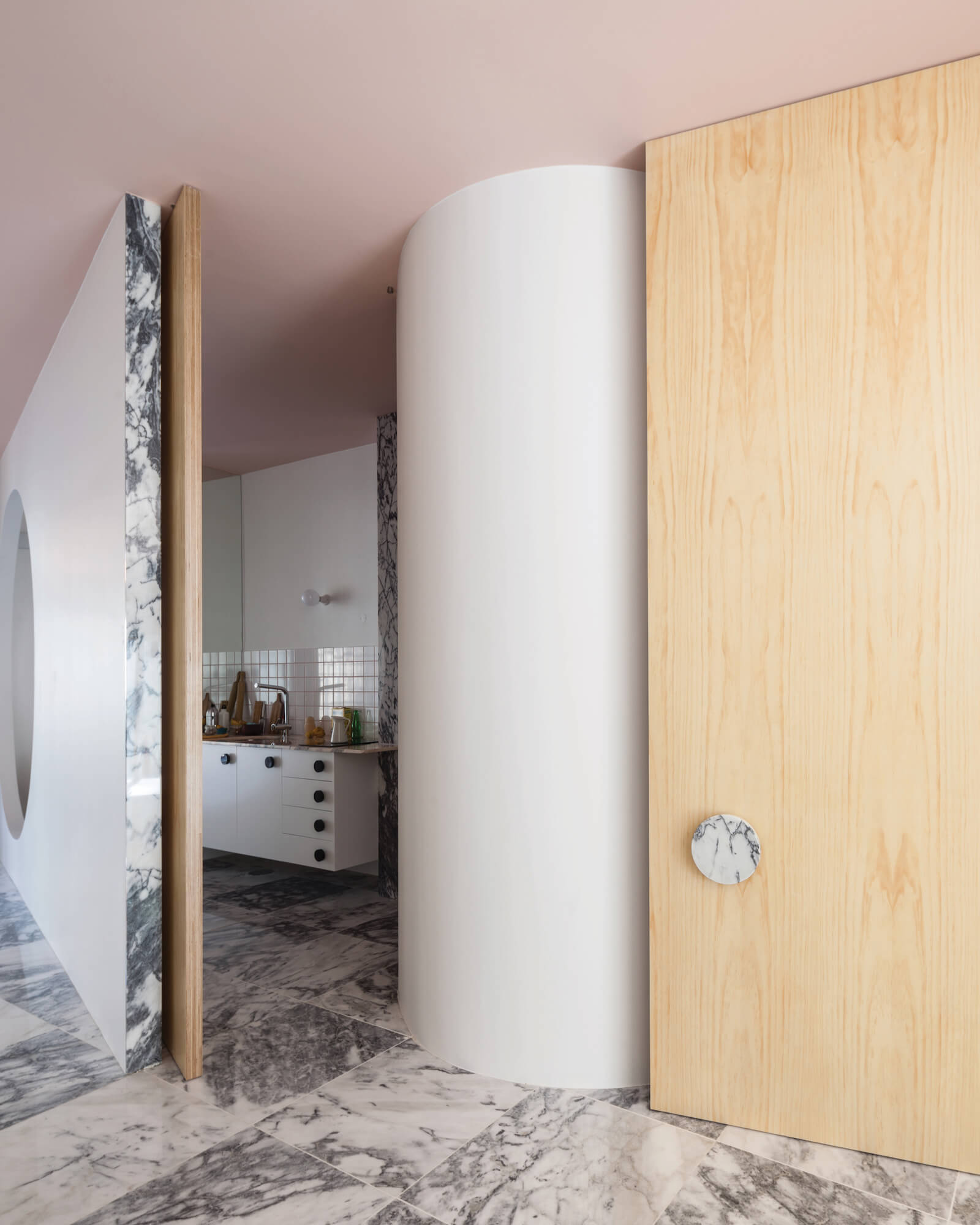 In Uneven House, three massive doors, made of plywood and adorned with marble to echo the floor, open to the kitchen.
MATERIALITY

How do you see the role of material in shaping spaces?

We don’t have a fascination for tactile, poetic qualities of materials. Our choices are conceptual; they follow the geometric logic of each project and its system of rules and exceptions.

And your use of colour?

We use it in a compositional way to distinguish easily between various surfaces and elements. Buildings, in this sense, are complex canvases and systems. Materials and colours hold together different rooms, apartments, levels, even buildings sometimes, providing an overall consistency and continuity that is occasionally cut and interrupted to separate elements and spaces.

The white wall seems to offer a default condition in modern architecture. In your buildings, does it stand in opposition to other, more colourful surfaces?

It has been a gradual appropriation of colour. Our first projects were mostly white. And even now, there is always a white background, an indifferent perimeter. Splashes of colourful elements happen against a perfectly neutral base.