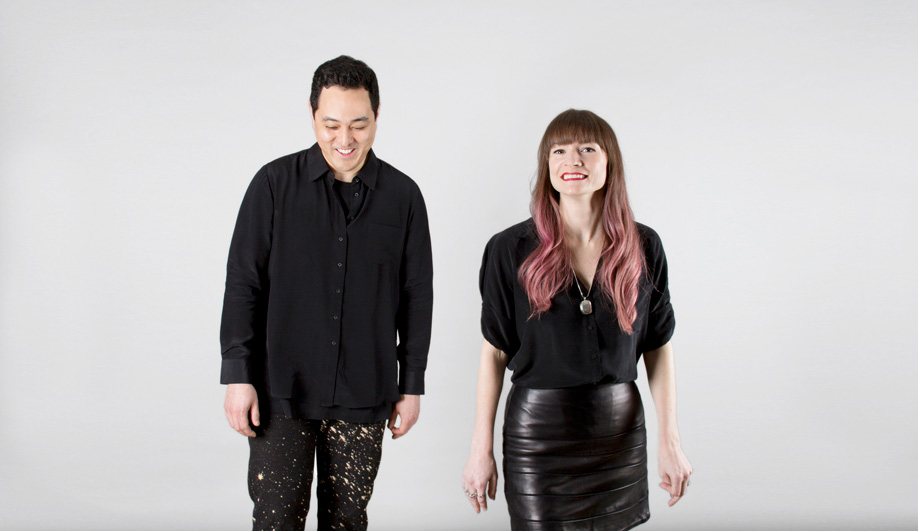 Against the dreary landscape of Toronto in February, and even the shimmering backdrop of Lake Ontario, Expanded Horizon almost disappears. A plain box of frosty-looking aluminum sheeting, open at both ends, the installation is about the same size (and temperature) as a meat locker. But look through its mirrored interior, and the distant cluster of skyscrapers to the west is suddenly transposed, Atlantis-like, to the middle of the lake. In a few hours, the box will frame the setting sun, and the ceiling will come to life with a soft, beckoning glow.

The work is the third in a series of temporary cubic structures by Polymétis built from off-the-shelf materials, all located just steps from the frozen waterfront. It follows 2015’s HotBox – a soundproofed black monolith that looked downright otherworldly against a backdrop of falling snow – and 2017’s IceBox, which presented the same featureless black facade, but hid a brilliant, wide-open courtyard filled with snow and ice. All three sit at the intersection of sculpture and architecture, and demonstrate the playful way Polymétis conceives of forms in unique relationship to their landscapes – especially winter ones. 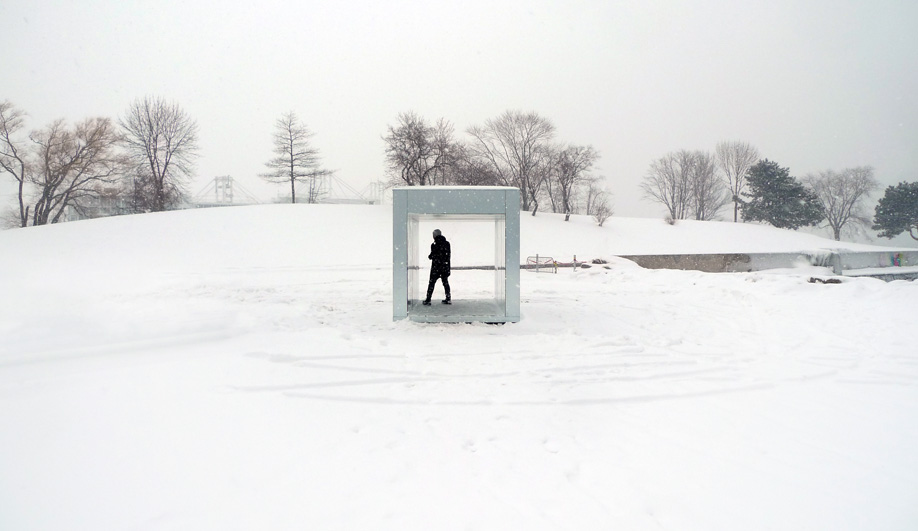 Expanded Horizon – The firm’s most recent intervention won a place in the Winter Light Exhibition at Ontario Place in Toronto. The open-ended steel box was positioned to frame views of the setting sun on Lake Ontario and the park itself, which includes the iconic 1971 Cinesphere.

Led by Michaela MacLeod, who teaches at the University of Toronto and the University of Waterloo, and Nicholas Croft, an architect with Toronto firm MJMA, Polymétis borrows its moniker from a 1755 book; the name roughly translates to “many trades.” It’s a fitting handle for a duo that, despite a penchant for constructing boxes, refuses to fit into one.

In hindsight, MacLeod and Croft’s career trajectories both seem to be unwavering: Kids drawn to art and science became high school students already sure of their calling in architecture. But several degrees later, both were still looking for a niche. “I had done terms in architecture, and worked for two urban design firms in Toronto,” MacLeod says. “Then I moved to New York and worked at a landscape architecture firm. I tried everything I could potentially do with my degree.”

Croft, also in New York, was working under land artist Maya Lin. “That was eye-opening,” he says of the experience. “She was doing work that straddles the line between architecture, landscape architecture and, sometimes, just pure art. To watch her work and learn how she thinks was a big moment for me.” 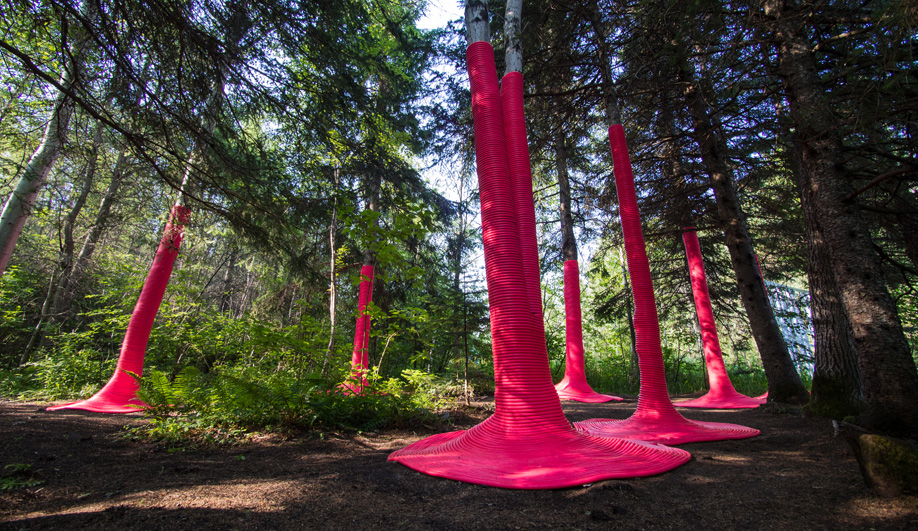 Pink Punch – Just weeks after meeting, Croft and MacLeod collaborated on a winning entry for the International Garden Festival in Grand-Métis, Quebec. Launched in 2013, and returning for the 2014 edition, the sculptural work wrapped latex tubing around a group of evergreen trees. Installed by the architects over four days, the project was driven by the off-the-shelf material, which was lightweight, inexpensive and easy to ship to the site.

Another big moment came in 2012, when Croft responded to MacLeod’s Craigslist ad seeking a roommate to share her East Village apartment. Just weeks after Croft moved in, the two were teaming up to create Pink Punch, an installation for a forest clearing in the Jardins de Métis, in Quebec. The following spring they headed north to construct the piece for the venue’s International Garden Festival. “They have these beautiful little cottages on the river where you stay,” MacLeod says. “You work hard all day building your thing, and then you get to meet the other artists at night. It’s a great experience.”

Unveiled in June of 2013, the sculpture consisted of little more than trees wrapped with fluorescent pink surgical tubing, but the effect was spectacular, as if the trunks were coated in goo that oozed across the forest floor. “Pink Punch was all about coming across a very bright, alien thing that draws you through the green of the forest,” Croft says. The highly photogenic project was a success, and spurred the establishment of Polymétis. 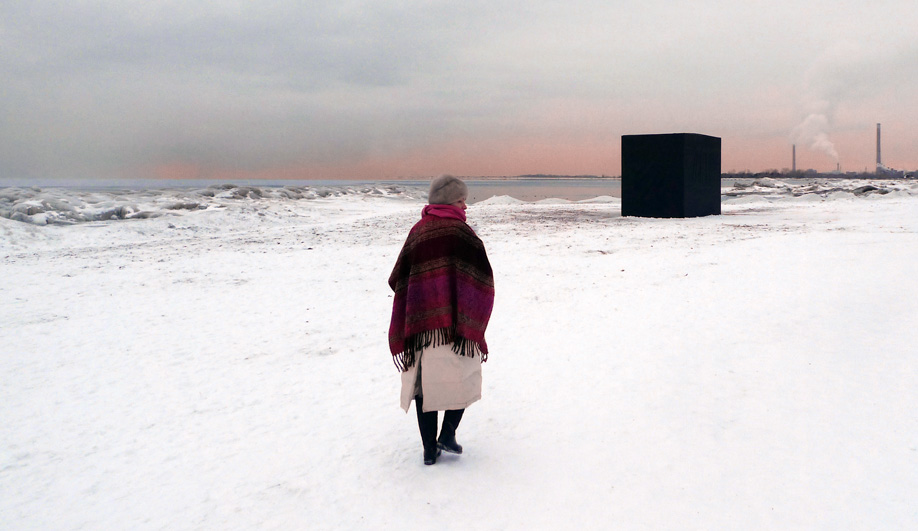 Built for the Winter Stations exhibition, HotBox was the first of Polymétis’ cube series and took inspiration from the insulating qualities of snow. The rubber-clad monolith spiralled into a foam-walled inner chamber lit by a mirrored open-air skylight that allowed flurries to drift into the interior.

Looking for more space to grow, the studio relocated to Toronto in 2014, where its series of winter boxes began. “We like the scale of these projects,” says Croft. “We use the neutral cube shape to focus on the interior, and for each we create an experience that zooms in on a very simple feature.” Of HotBox, whose interior was soundproofed and lit by a single oculus, he says, “Exiting that small, dark space to face the frozen, grey lake created a profound moment.” 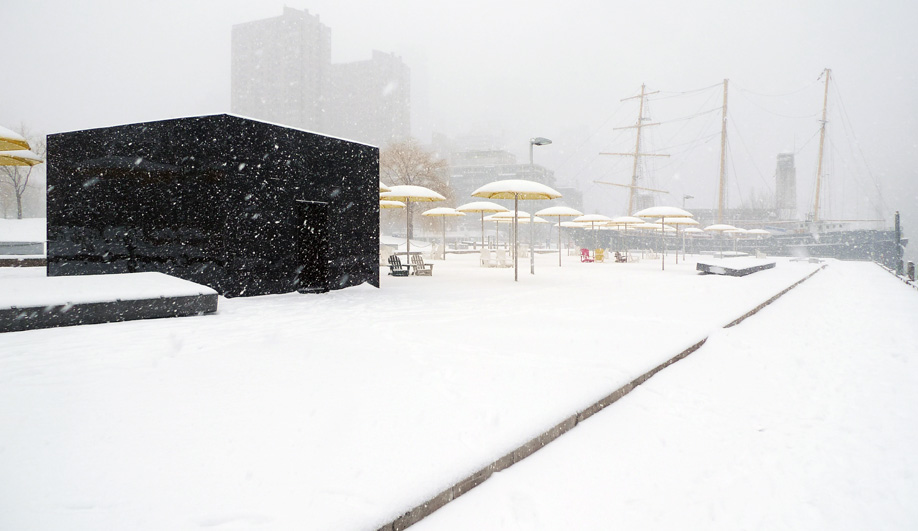 Icebox – Informed by the contrast of warm interiors and the icy outdoors, Polymétis’ second lakeside installation in Toronto again juxtaposed a black cube against a winter backdrop. This time the facade was reflective acrylic plexiglass, and the structure was entered through an enclosed passage that led to a courtyard. The central space was wrapped in chain-link fence to help form a tufted wall of ice and snow.

“These projects were so small that we were able to really investigate the threshold of each one,” MacLeod agrees. “In IceBox, we explored compression and expansion.” Expanded Horizon’s mirrored interior, meanwhile, multiplies the sun when it’s needed most.

It’s no coincidence that all three boxes debuted in winter; they make the most of the surrounding greyness by maximizing contrast between light and dark, enclosed and open. “Winter can be brutal,” Croft says. “We’re trying to highlight some of the things that we think are beautiful about it.” 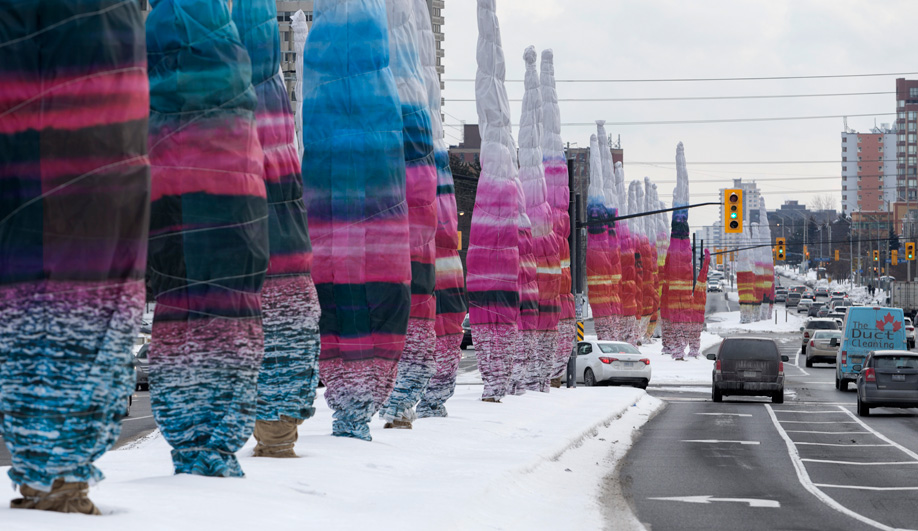 This past December, sun-SET transformed a row of trees on an urban median into a vivid tableau, displaying an abstracted interpretation of the city skyline in streaks of pink, blue, yellow, red and orange. Inspired by traditional tree-wrapping, in which trees are bound in rope and burlap to protect them from the elements, this simple intervention was on view in Mississauga, Ontario, for the duration of winter.

Polymétis hit its stride in the latter half of 2017, as several of its proposals were picked up within a matter of weeks: Expanded Horizon; sun-SET, a series of tree-wraps that superimposes a saturated sunset over Mississauga, Ontario’s snowy streets; and Lit, a glowing pink Christmas tree assembled from mirrors and prisms, which brought a dash of synthwave to the 12 Trees exhibit at the Gardiner Museum in Toronto. All three were unveiled by early December. The firm also won the call for a pavilion in West Cambie Park in Richmond, B.C. – their first permanent public installation. 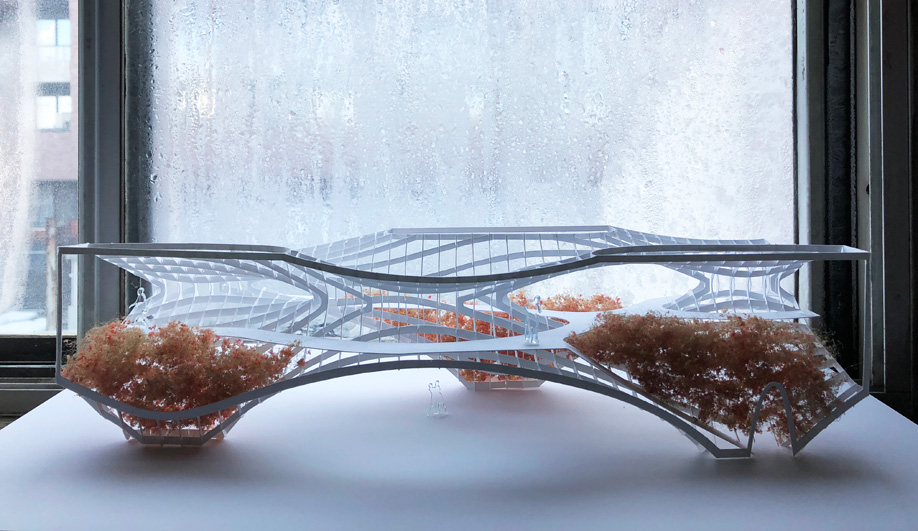 Last year, Polymétis’ proposal won a national call for an integrated landscape/public art project, slated for West Cambie Park, in Richmond, B.C. This handmade model depicts an early iteration of the design, which will serve as a functional public art piece, offering a shady sitting area and plantings. “The project will potentially be CNC-milled,” says MacLeod, “so we’ve connected with a great fabricator in Vancouver who is also doing work for Shigeru Ban and Kengo Kuma.”

The West Cambie pavilion is a major departure. The proposal is for a towering tripod of parametric curves constructed from interlocking timber beams, as if the landscape itself were bursting upward. A translucent sunshade sits on top, funneling rainwater into an on-site estuary, “It’s a piece of art that’s also sustainable infrastructure,” says Croft.

The pair expects the larger scale of the project to open more doors. They’ve already been shortlisted for another permanent public installation in Guelph, Ontario. “We enjoy small projects – a lot of the way we think is at that scale – but we would love to explore some of those concepts in larger forms,” Croft says. “A museum or gallery would be pretty amazing. But as long as we can work on varied projects, we’ll be happy.”