Geoffrey Lilge’s Div.12 is Capturing a High Point in Canadian Design
Within an industrial park in northwestern Edmonton, a weathered-steel warehouse has become the headquarters for Div.12, owned and operated by Geoffrey Lilge. 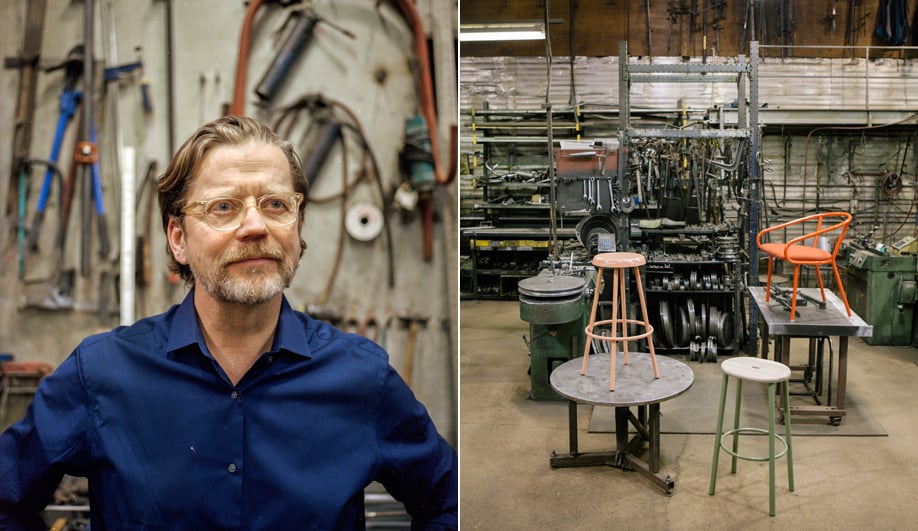 Within an industrial park in northwestern Edmonton, a weathered-steel warehouse has become the headquarters for Div.12, owned and operated by Geoffrey Lilge. The designer and entrepreneur has big plans for this half-burned-out metal shack: to transform it into a creative hub for the manufacturing of simple yet well-made metal furniture designed by some of Canada’s hottest talents.

Geoffrey Lilge stands in his “prototype graveyard,” a jumble of furniture arms and legs in a loft overlooking his shop. The space is cavernous and quiet – with a well-preserved battery of army-green machinery towering over empty welding stations – and reeks of grease. For visitors who have entered the building across a parking lot littered with broken appliances, where pigeons perch on urinals bolted to the charred walls (which were exposed to the Albertan elements after a wicked fire), the sight of Lilge – working alone, sawdust smeared across his navy collared shirt and grey toque – is positively post-apocalyptic. And in a sense, his new contemporary furniture company, Div.12, is picking up after an untimely end. 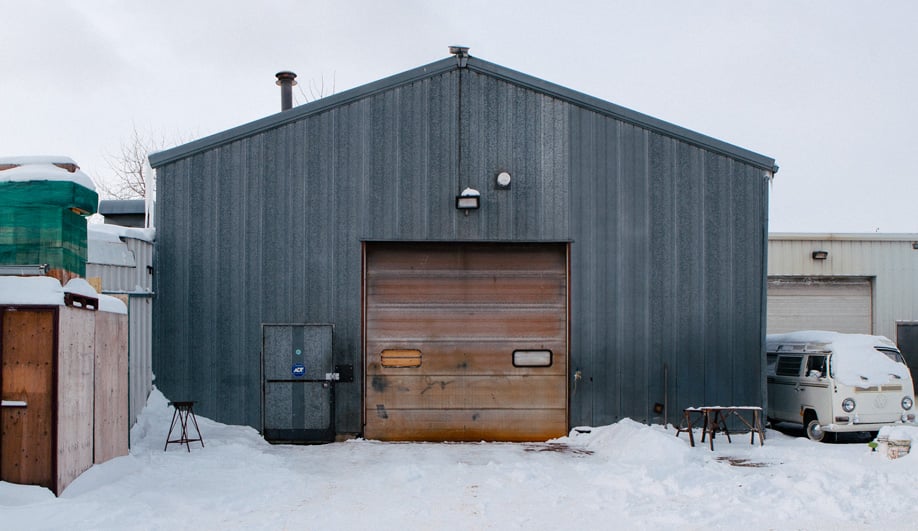 The last time his face graced the cover of Azure, Lilge was a 29-year-old in a jaunty cowboy hat, posing with Randy McCoy and Daniel Hlus, his partners in Pure Design, Canada’s short-lived juggernaut of a design company. Their smiles were imbued with entrepreneurial optimism. Indeed, at its peak Pure Design would win the 2001 ICFF Editors Award in New York; have a staff of 35, a warehouse on the outskirts of Edmonton and a 2,787-square-metre shop; and be shipping over $2 million annually of slick home accessories by such star designers as James Bruer and Karim Rashid. All the more impressive, the firm manufactured in-house, maintaining quality control by eschewing subcontractors and overseas manufacturing. And they were doing all of this in Alberta, at a time when locals were more likely to own a handcrafted horse saddle than a designer chair.

But the University of Alberta graduates weren’t businessmen prepared for a company of that size, says Lilge. In 2003, he broke away over operational differences and pursued a venture that didn’t pan out, before returning to grad school and taking up a teaching position. He disappeared from furniture design until now. Meanwhile, Pure Design was pounded by a tanking U.S. dollar in the wake of 9/11. The lion’s share of exports dried up, and Pure Design was sold and turned into a retail brand.

Lilge puts down the broomstick that he’s been unconsciously carrying for the first 10 minutes of the shop tour. He reaches into the prototype graveyard and yanks out the only completed work from the steel tangle. It’s a simple grey stacking chair with a handle in the backrest: the Pura Chair. “You’ve come full circle when you find your stuff at Goodwill,” says Lilge, adding, “I really enjoy having a shop again, to come in and put together a prototype in a few hours.” 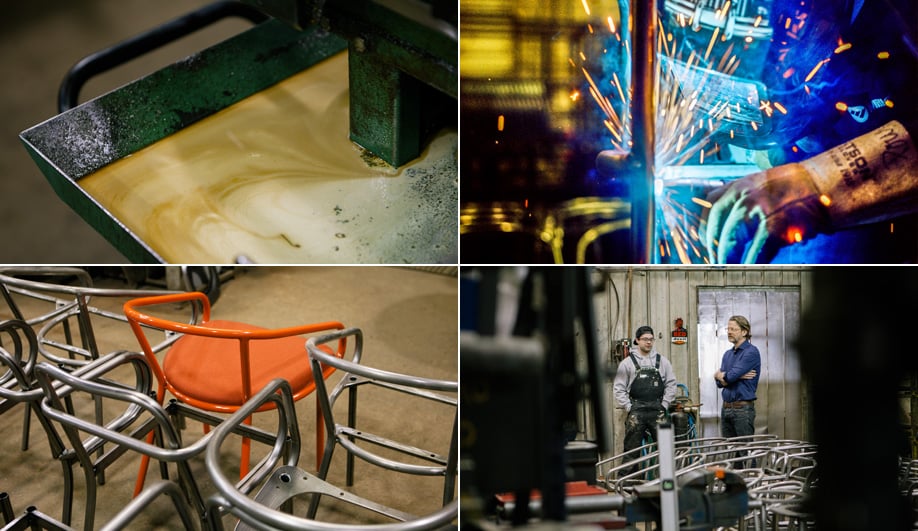 Lilge took over a metal shop and its industrial machinery in January 2017, and named it Div.12 (or Division 12) after the CSI category for interior furniture.

While Lilge’s early career focused on affordable furnishings and accessories for the stylish home, Div.12 specializes in upmarket chairs for the hospitality industry; the collection inadvertently came out of a slew of private restaurant commissions. Equally comfortable in the metal shop and the wood shop, Lilge generally makes his chairs of a powder-coated steel frame and either an upholstered seat (with colours customized by clients) or a solid CNC-milled wood seat that’s as pleasing to touch as it is to look at. “There’s a lot of generic looking hospitality seating in the market, and I want to be the solution to that,” he says.

He would know. Restaurants shaped the last decade of his life in more ways than one. While the early 2000s were tough on Canadian manufacturers, they were a boon for the energy industry, which brought to Alberta new money and newcomers who whipped Edmonton and Calgary into cosmopolitan centres. Lilge’s wife, Cindy Lazarenko, left catering to start an upscale casual restaurant, Culina, which won national accolades and was featured on the Food Network.

Other restaurants across Western Canada followed, hiring Lilge to help build aesthetically pleasing rooms, including several wine bars, which inspired OnOurTable, his brand of soft-to-the-touch charcuterie boards. Starting in 2010, Lilge sold thousands of units, carried by Williams-Sonoma for as much as $400 a pop, before selling the company last year to focus on Div.12. After a decade of dining and sometimes designing in the country’s trendiest restaurants, he’s noticed that, all too often, the chairs are low priority. 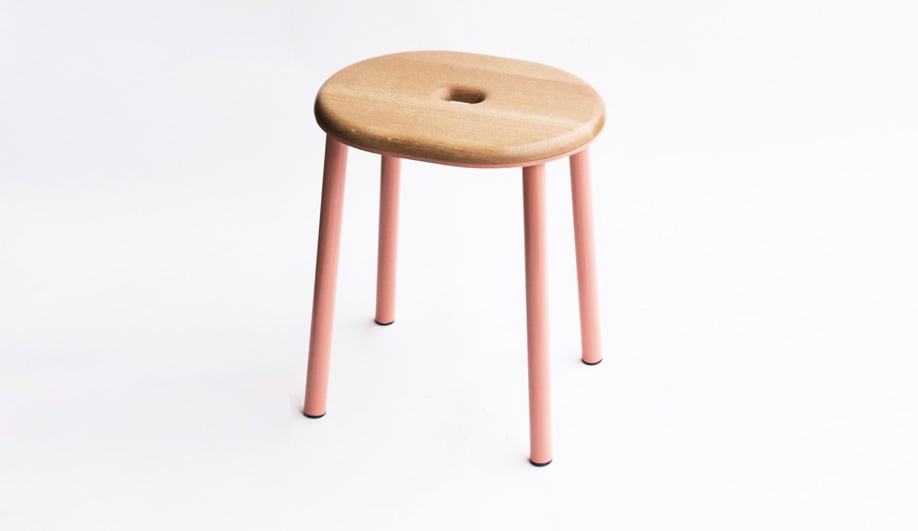 The L63 Deck stool. “This is a very easy chair for production: four rods, a hoop, a plate, and a piece of wood,” says Lilge. “It’s essentially one of my charcuterie boards.”

“They do a nice space and then last-minute run out of money, so they throw in this cheap furniture, and it ruins the whole project,” says Lilge, standing between a tube bender and a hydraulic press on the main level. “But I can offer a unique piece for a restaurant.” He lifts the L63 Deck bar stool off the concrete floor and flips it upside down to reveal no visible welds underneath. “This is a very easy chair for production: four rods, a hoop, a plate, and a piece of wood,” he says, stroking the smooth black walnut. “This is essentially one of my charcuterie boards.” 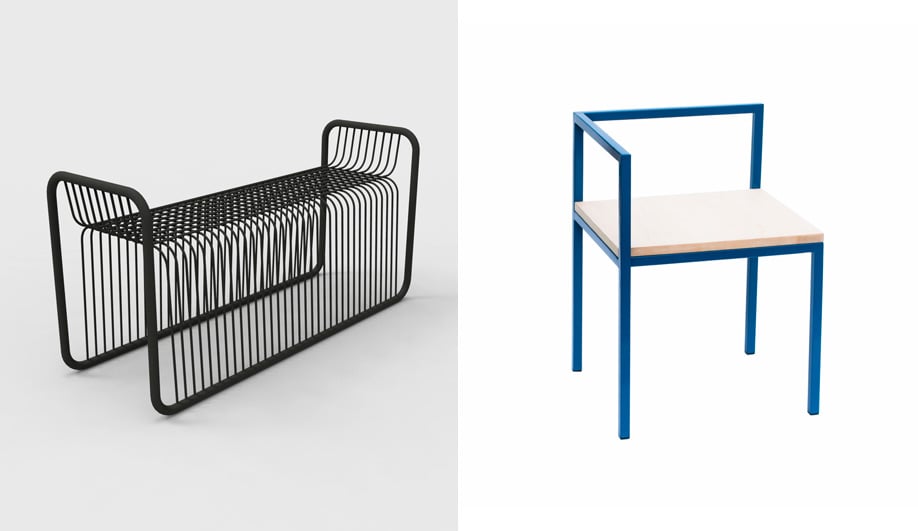 Left: A bent-metal bench by Vancouver designer Lukas Peet (opposite) was launched this spring at Milan Design Week. It is part of a larger family of seats defined by dense rows of steel rods. Right: The Homa collection by Montreal’s Rainville-Sangaré is space economical and elegant. Left- and right-facing versions can be combined to form a loveseat.

Lilge’s collection is currently 25 pieces strong, but not all involve his signature marriage of technology and natural woods. As did Pure Design, Div.12 works with designers to diversify the offerings with collections of their own; these include benches, chairs and stools by Vancouver designer Lukas Peet, and eight chairs partially upholstered in felt by Zoë Mowat, who studied under Lilge at the University of Alberta and was named one of Azure’s Makers and Shakers in 2016. “He’s been a mentor to me over the years, helping me answer the big questions and manoeuvre [in] the design world,” says Mowat, now based in Montreal, where she designs home furniture and objects characterized by bright pops of colour.

“I believe Canadian design is at a high point right now, so that’s what I am focused on exploring,” says Lilge. “It’s not all about me or my style. I can only design so much.” 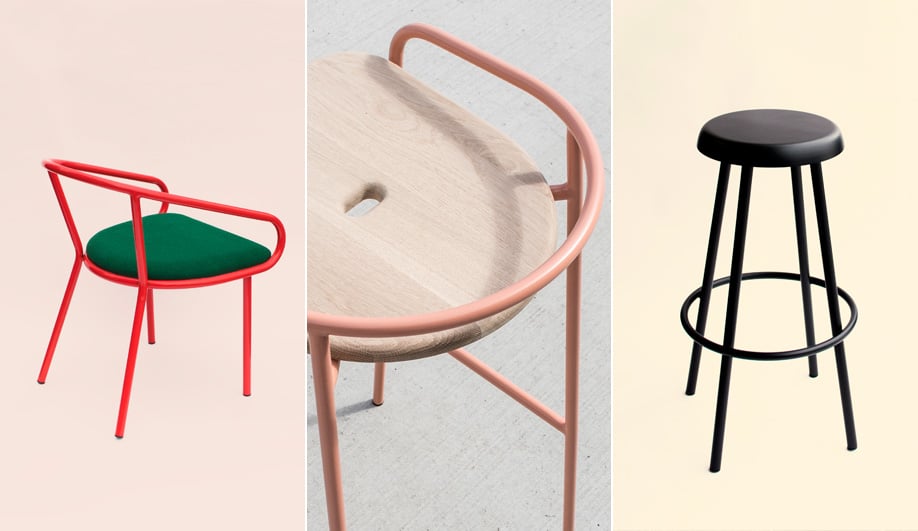 Since 2017, Lilge has built a collection of 25 seating options to initiate the company. The L31 Wedge armchair (far left) and L43 Bender bar stool are by Lilge, while the SL17 Shop stool (far left) is by Scot Laughton.

Another homecoming of sorts: a sturdy steel bar stool by Scot Laughton that’s an “updated version” of one Laughton created for Pure Design; the original now resides in Design Exchange’s permanent collection. In fact, this new version of the Jim Stool, called the Shop Stool, was built with the same machinery, which Lilge serendipitously purchased last year when he took over the furniture shop that had been shuttered by the fire – he didn’t realize this coincidence until months later.

“This tube bender used to belong to Pure Design,” he says, slapping the green machine and pointing around the shop: “Our old sander right there, and our old chop saw over there. When my partners had the auction after I left, it was bought by this company. I bought it back. Full circle.”