The 10 Best Ideas of 2016
Second in our Best of 2016 series: the ideas and concepts that, while not yet available for purchase or implementation, pack major potential for architecture, design, wellness, and the environment. As selected by our editors, these are the best ideas of 2016. 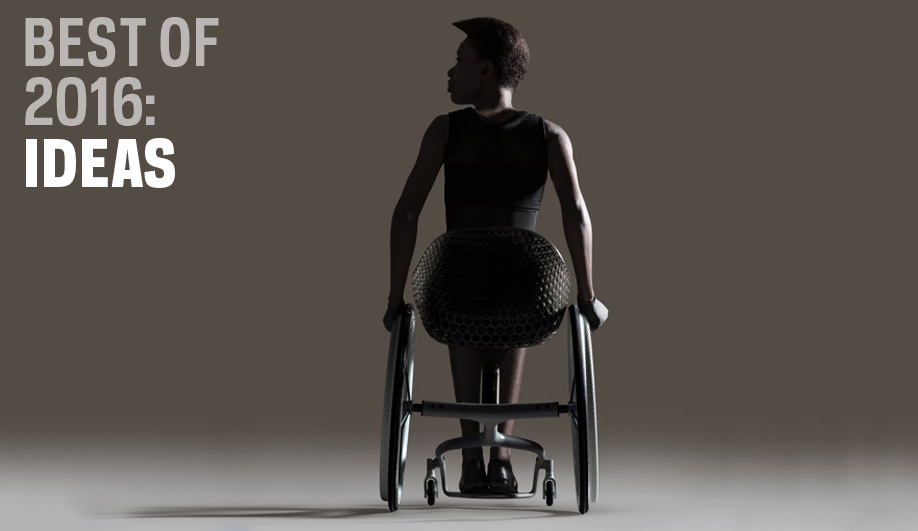 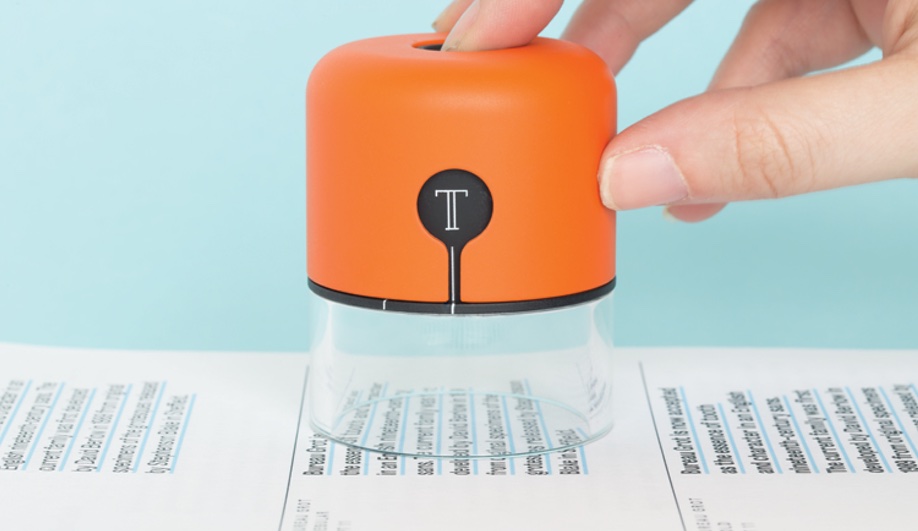 1 A revolutionary design tool: Spector by Fiona O’Leary
Spector is the stuff of graphic designers’ dreams. A “physical eyedropper” for fonts, it’s a handheld tool that identifies printed typefaces (and colours) at the touch of a button. The user holds the device over a sample of printed media and presses down. The simple gesture triggers a built-in camera to take a picture sample. It then transmits the information about the shapes, and the CMYK/RGB values, to a database that identifies the font and colour.

If the user’s computer has an open InDesign project on the screen, a custom plug-in can automatically change the text and colours to match the sample. The working prototype was developed by Fiona O’Leary as her final project at London’s Royal College of Art. 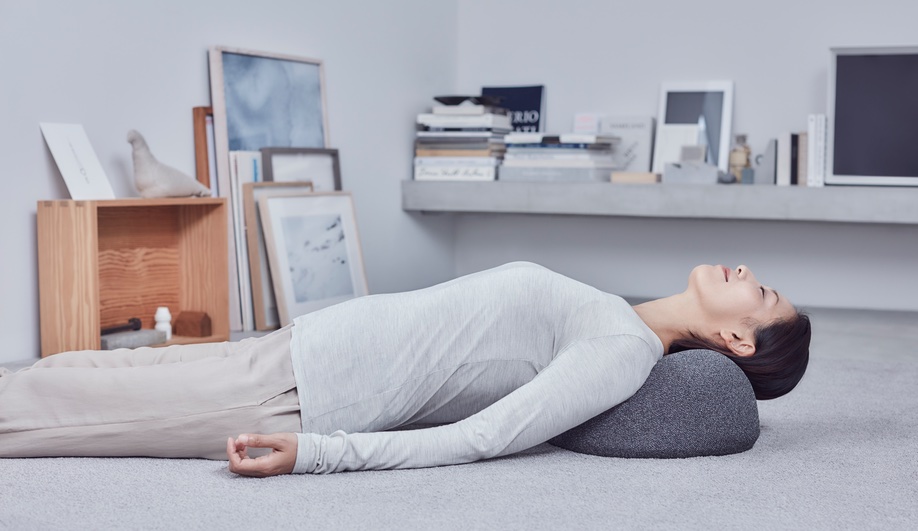 With its softly moulded oblong form and black-and-grey speckled fabric covering, the pillow takes on a stone-like aesthetic and can double as an organic design object. It has clinical benefits, too. Intended to be used on the floor, with the user laying on their back, the designers claim the massage effect is similar to that administered by hand, boosting blood flow and circulation. 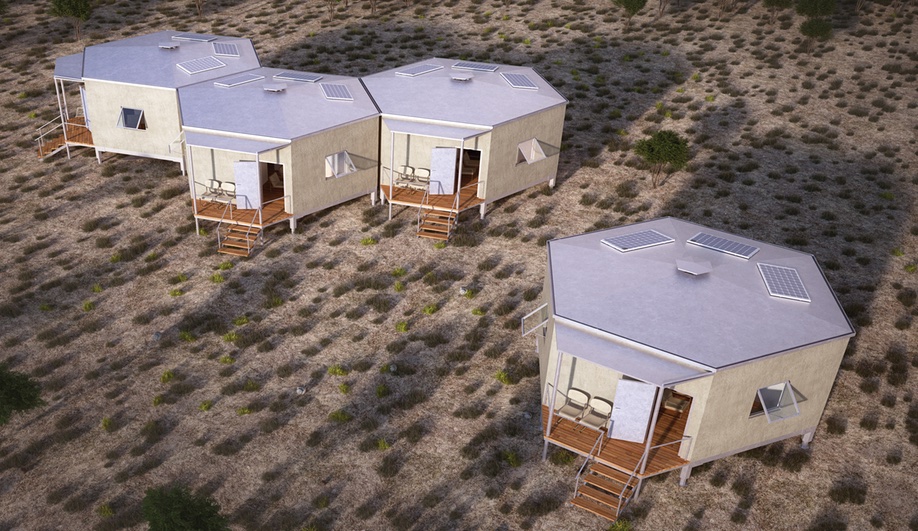 3 Dignified refugee shelters: Hex House by Architects for Society
The Syrian refugee displacement crisis inspired the non-profit organization of international architects AFS to develop a low-cost housing prototype that could be easily transported and rapidly deployed. The resulting concept, Hex House, is a 40-square-metre flat-packed unit comprised of a galvanized tube steel base and structural insulated metal panels for the walls, floor and roof.

Each house has two sleeping areas, a kitchen, a living room and a bathroom, and is designed to be combined with other units, to form larger dwellings for extended families. Walls are locked to the roof using simple tongue-and-groove joints, allowing for simple layout changes. Plans also include rain water harvesting systems, solar roof panels and options for customization of finishes and cladding. The firm, currently crowdfunding to build a prototype, notes the importance of the design solution to be “both dignified and cost effective.” 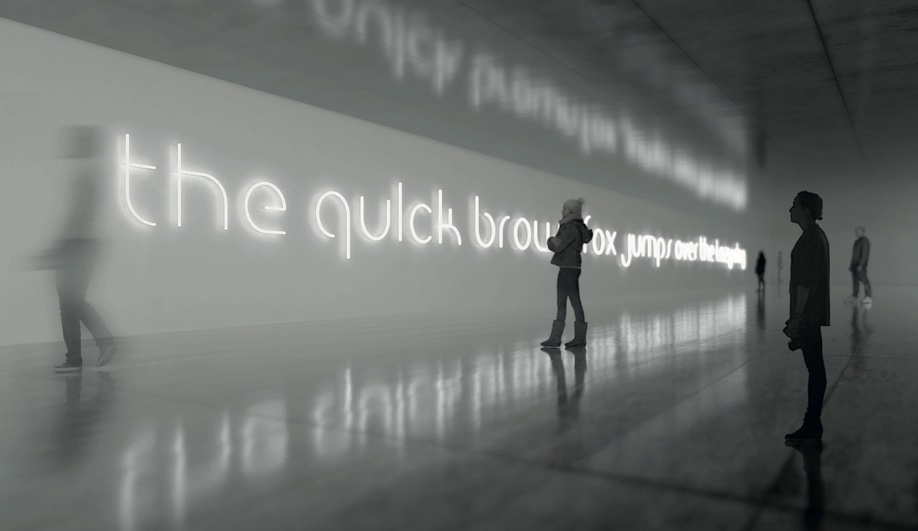 4 A modular, customizable lighting system: Alphabet of Light by Bjarke Ingels Group for Artemide
At Light + Building, the lighting expo held every two years in Frankfurt is the place where top brands launch their newest luminaire products. In 2016, Artemide outshone them all, debuting some impressive collaborations, including one that won over most visitors to the leading brand’s massive booth: Alphabet of Light by Danish architect Bjarke Ingels.

Ingels presented a bespoke typeface formed by a series of electromagnetically linked linear and curved LED tubes. Within each module a thin aluminum core supports LED strips on either side. Composed as letters or geometric shapes, the components emit a soft, diffused light without glare or shadows. 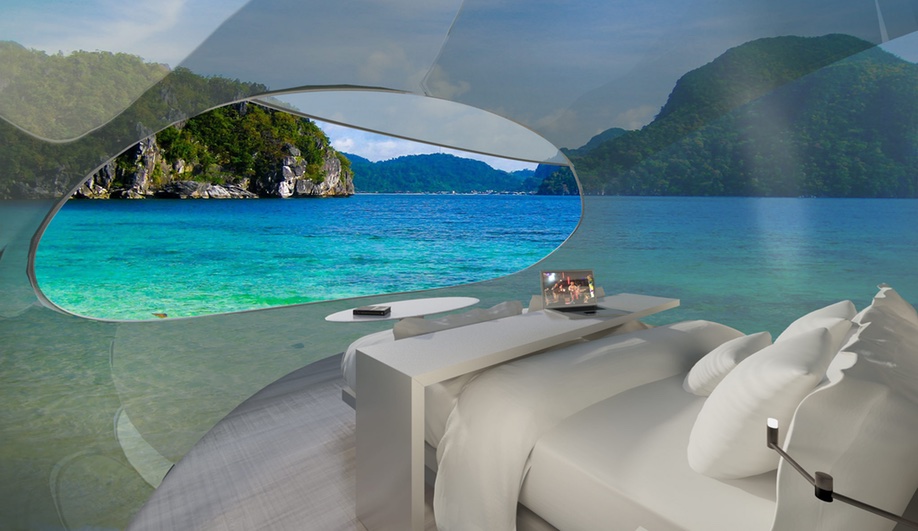 5 A new frontier in travel: Driftscape by HOK
Driftscape is a fantastical reimagining of the travel experience as we know it, though very much rooted in existing technology. Designed by HOK’s Toronto office, it is a conceptual mobile network of drone-powered pods that allow travellers to journey to remote locations with minimal impact. The individual Driftcraft guest rooms offer 360-degree views of the outside world and are fitted for two- to three-day excursions. The central Oasis module contains a shared kitchen, bar, and lounge. Part bird, part hotel, Driftscape is the ultimate globetrotter. 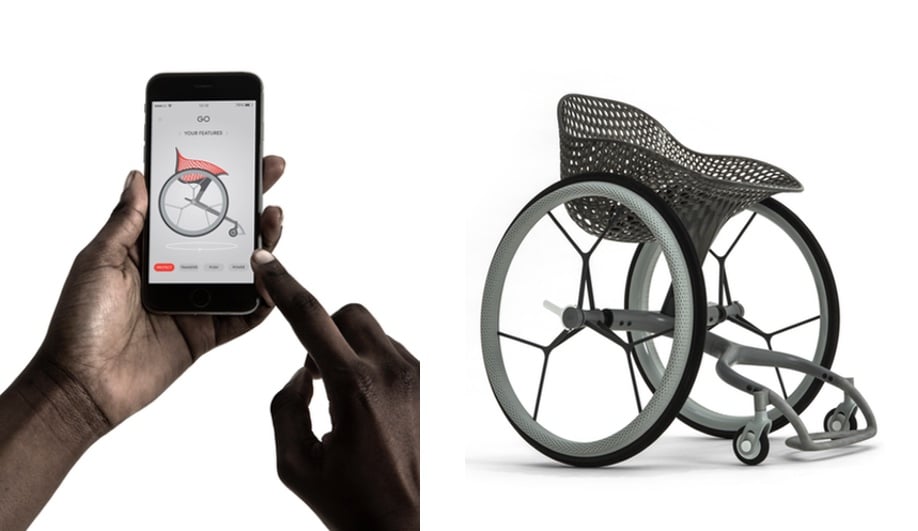 6 A made-to-measure mobility device: GO wheelchair by Layer Design
Layer Design’s GO Wheelchair is sleek, 3D-printed, and made to measure. Created in conjunction with Materialise, a leading 3D-printing solutions organization, the wheelchair’s seat and foot-bay are custom-fitted according to biometric data.

Conforming to the user’s shape, weight, and individual needs, the chair’s bespoke design minimizes injury and maximizes on comfort, flexibility and support. And, if GO does, in fact, become a reality, buyers will be able to use an app to handpick patterns and colourways. The concept also offers tactile push rims and matching gloves.

“It may sound a bit trite,” said Layer director Benjamin Hubert earlier this year, “but our research tells us that a massive frustration for people using wheelchairs up to hours a day is that they don’t express personality, youthfulness or point of view. If you can do it with your sneakers, why can’t you do it with your wheelchair?” 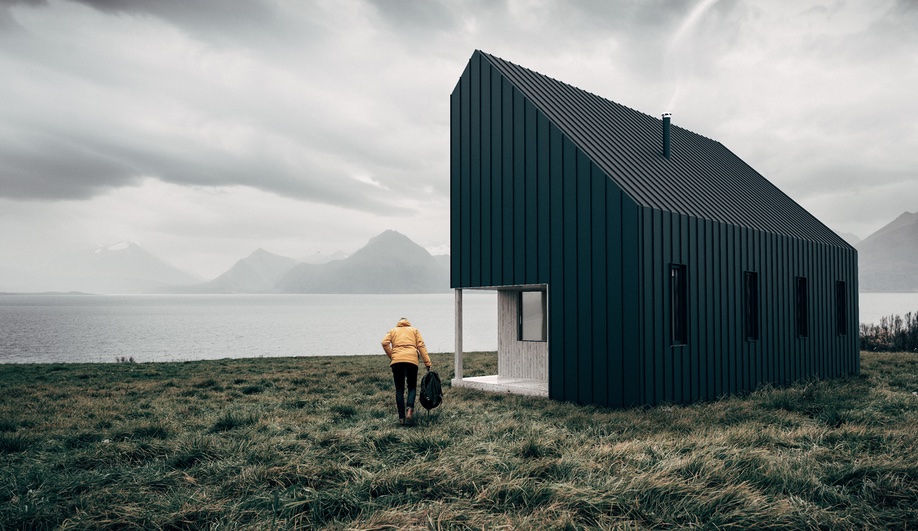 7 Cabin construction made simple: Hut Assembly Kits by The Backcountry Hut Company
An off-shoot of Vancouver design firm Leckie Studio, The Backcountry Hut Company has developed a clever concept for modular cabins that can be delivered right to your door as a DIY assembly kit. The two-storey, pitched-roof cabins are available in two styles: a Backcountry design (meaning, more rugged and with fewer amenities), or as a Frontcountry model, for more urban and easily accessible sites.

The company has plans to develop four different modules, with sleeping for two up to 24 people, and with a variety of finishes and interior fit-outs. Though assembly won’t be as bare-bones as an Allen key, the startup assures it will be simple with “no heavy machinery required.” 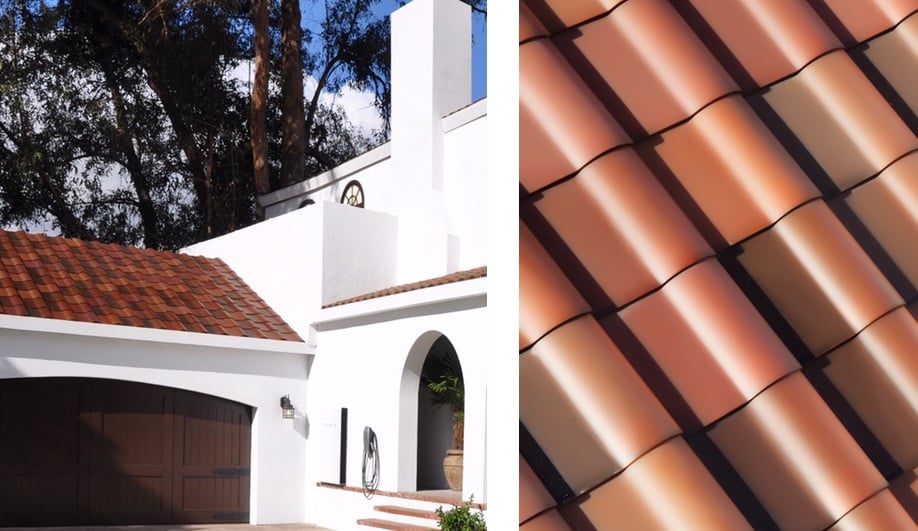 8 A sexier solar solution: Solar roof tiles by Elon Musk
When the Tesla CEO revealed in October his company was rolling out residential solar roof panels, the announcement was met with both excitement and skepticism. Musk’s projects are often founded on grand ideas, and while solar tiles may not be as fantastical as the Hyperloop, they are definitely innovative and green.

One of their most appealing features is that they are virtually indistinguishable from traditional roofing – a distinction that may every well push the residential solar power market to a whole new stratosphere. Gone are the bulky-looking rectangular panels that have limited aesthetic appeal.

Musk’s tiles hide solar cells within extra-durable tempered glass, available in smooth, textured, slate, or Tuscan (pictured) finishes. And, they are durable enough to withstand hail at speeds of 322 kilometres per hour. A coloured louver film in each tile creates an opaqueness when viewed from a street perspective. From above, the tiles become visible, allowing for sunlight to permeate them. Production is expected to be begin mid-2017. 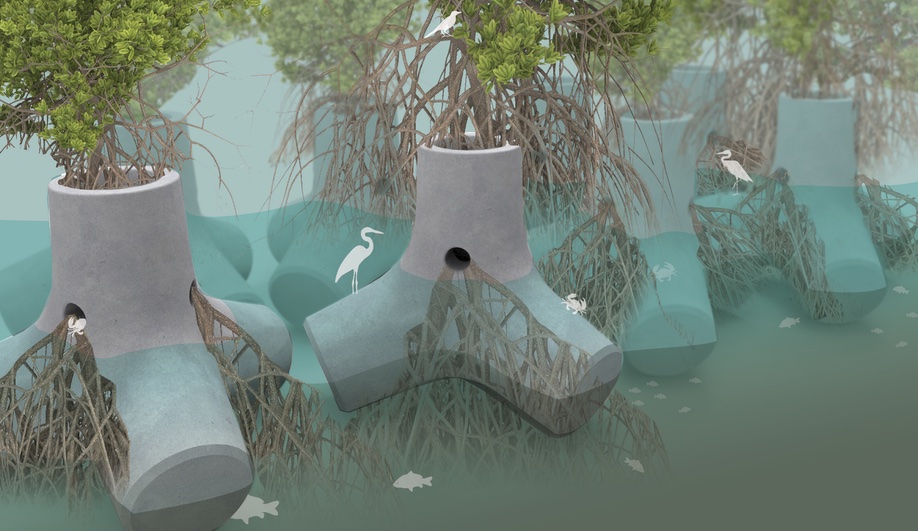 9 A more sustainable environmental defence: TetraPOT by Sheng-Hung Lee and Wan Kee Lee
Concrete tetrapods are a common sight along coastlines. They form of an artificial sea defence that is meant to slow down sand and soil erosion. However, they face detraction for a number of reasons: over time, these giant formations become dislodged; their visual bulk is often criticized for breaking up the natural beauty of the surroundings; and they are considered a hazard to swimmers and surfers.

Their concept, TetraPOT, sees the concrete structure hollowed out and inserted with seeds planted in a decomposable pot. Channels in the body of the TetraPOT allow the seeds to grow, with water flowing in when sea levels rise. As the plants mature, their roots grow out of the channels, eventually interlocking with neighbouring pots to form a secure hybrid natural-artificial protection barrier. 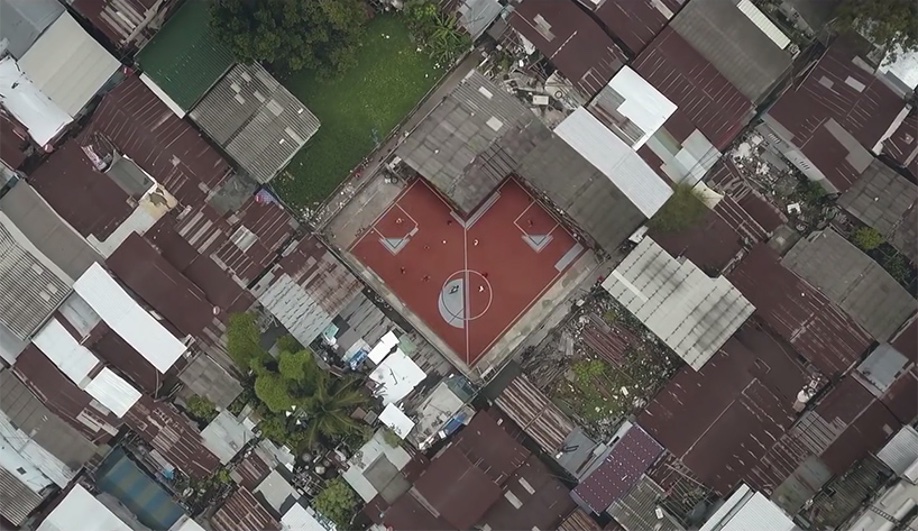 10 A game-changing use of ‘unusable’ space: Unusual Football Field by AP Thailand and CJ Worx
Sports are all about rules, so it’s not surprising that most of the world has never considered anything but a rectangle when it comes to football fields. In Bangkok’s Khlong Toei community, where space is a premium, such rigid restrictions aren’t possible. So, AP Thailand and CJ Worx (Thailand’s largest ad agency) came up with a plan: make the field fit the space. The concept is as simple as it is life-changing. Where there was once a garbage heap, there is now an elbow-shaped field for kids to kick around a ball.

The Unusual Football Field project went viral earlier this year, when aerial shots were released showing the two fields that have now been built. The project has now made its way on to many Best Ideas of 2016 lists, including ours. Its success is leading to plans for more. “We are currently surveying waste areas in other communities,” says Pattaraphurit Rungjaturapat, deputy chief at AP Thailand. “We will be asking them permission to develop the new fields. We are now planning a third field for another community in Bangkok.”