The 10 Best Product Designs of 2017
After 12 months of covering design-world news, Azure's editorial team takes a look back at the year that was. Here are the 10 best products designs of 2017. 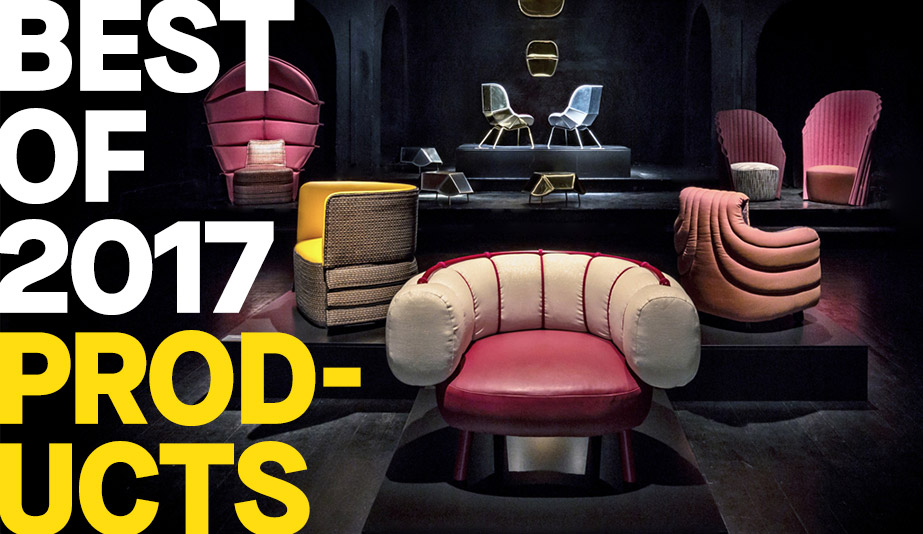 In 2004, Thomas Heatherwick captured the world’s attention with The Rolling Bridge – a portable, truss-like footbridge that rolls itself up like an armadillo. Both bizarre and revolutionary, it signalled Heatherwick as a major talent to watch. Thirteen years on, his London studio is still exploring novel ways for making normally stagnant objects morph from one shape to another. Friction table, which launched at the Frieze Art Fair in October, is made of 61 paper slats that have been solidified in resin. Using basic lattice construction, the oval-shaped 1.8-metre table extends easily to over four metres with a gentle pull on one of its legs.

Why we like it: Besides admiring its precision engineering – and the fact that it’s made of paper – Friction offers a pragmatic solution to saving on space. 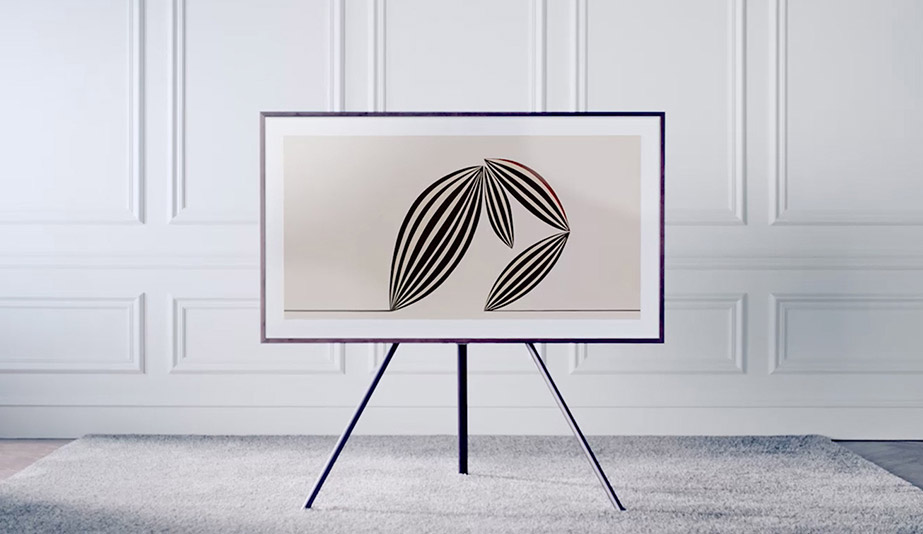 As evidenced by its range of televisions and smartphones, Samsung creates the best screens in the world. That isn’t news. What is noteworthy is The Frame, a flat-screen television developed in collaboration with Fuse Project of San Francisco. Available in 43-, 55- or 65-inch variants, the 4K smart screen, powered by Samsung’s Tizen operating system, disguises itself as a piece of art when mounted to the wall. It comes preloaded with 100 paintings from major museums around the world, and more can be purchased from Samsung’s Art Store. The real magic, though, is how it merges with most interiors. Available in a walnut, beige wood, black or white, the TV is embedded with light sensors that dim with the room’s ambient lighting, allowing it to blend in without manual adjustments. Motion detectors also turn the set off when no one’s in the room.

Why we like it: Unlike most televisions, it’s a screen that fits wonderfully in an art-filled living room. 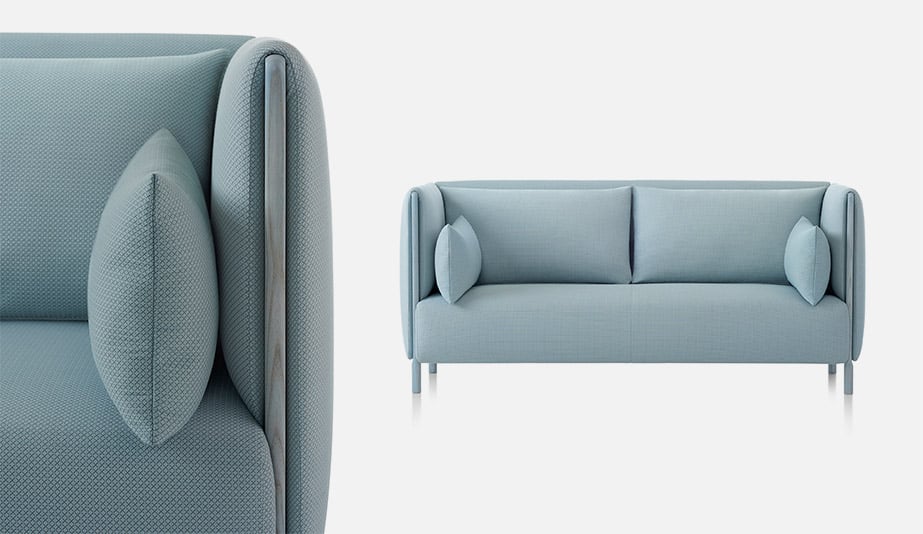 For their first offering with Herman Miller, Amsterdam’s Scholten & Baijings knocked it out of the contract park. Stefan Scholten and Carole Baijings are known for their deft use of pastel hues, simple lines and minimalist patterns that announce themselves softly. With ColourForm, the duo applied its quiet aesthetic to a family of sofas and lounge chairs that emphasize beauty as much as function. The collection hits on the growing trend for casual work environments, where breakout spaces have begun to look more like living rooms. The simplicity of its straight-back form, though, belies its complexity. Its slender wood frame is upholstered to evoke the look of a woollen blanket draped over the arm, and it looks especially cohesive when matte-stained to match the fabric.

Why we like it: Scholten & Baijings developed three patterns for the collection, but Tracery by Maharam is a particular favourite. At first glance, the textile blend reads as monochromatic; on closer inspection it reveals a geometric pattern with 3-D effect. 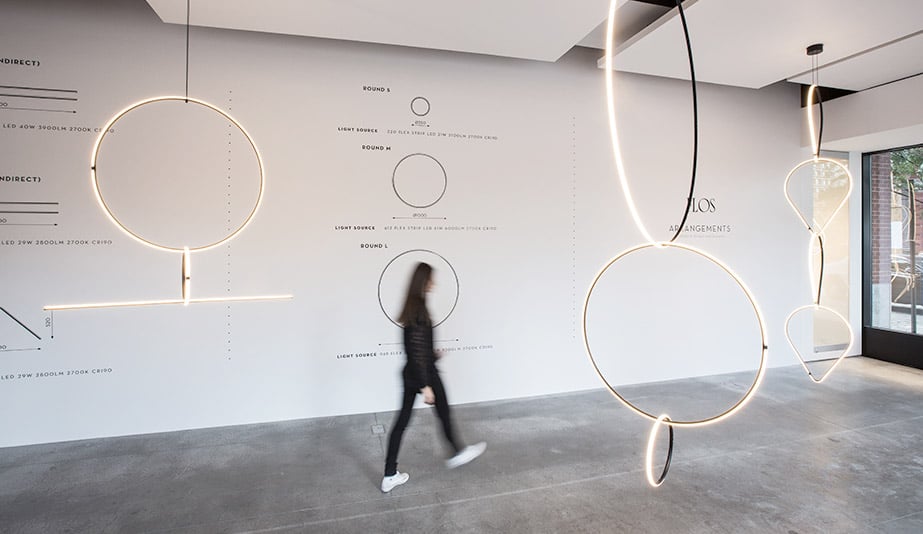 It was a good year for lighting. At Euroluce this spring, beautiful luminares were everywhere, unveiled by the likes of such top designers as Andrea Anastasio, Davide Groppi and Os+Oos. But Michael Anasstasiades is a master of light on a whole other level. His work has the spatial sensibilities of fine art or sculpture, and his thought process is like that of a poet. Arrangement, his latest for Flos, is inspired by jewelry, with its ultra-thin shapes – circles, teardrops, squares and straight lines – looped together in gravity-defying configurations. Each pendant is like an ornament that can be hung on its own, but the pieces also take on a theatrical grandeur when presented together, appearing as though floating in midair. Anasstasiades has managed to bend light using flex strips embedded with LEDs that curve at corners or come full circle. What really stands out is the balancing act they seem to perform, with no visible fasteners to distract from their beauty.

Why we like it: While 2017 was certainly a solid year for lighting, the Arrangement series stood out for its simplicity and undeniable elegance. 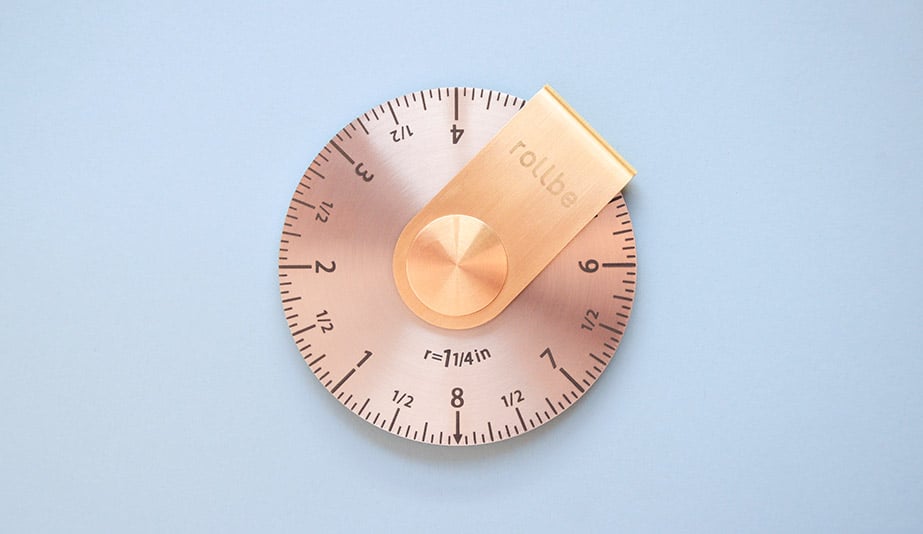 Best Tool: Rollbe by The Work of Mind


The Work of Mind of Toronto launched this circular ruler on Kickstarter in July and attracted over $130,000 in pledges. Built to slip into a pocket or attach to a key ring, the stainless steel disc comes in four- and eight-inch circumferences, each with a brass handle for holding while rolling the knurled edge over and around any surface. Rollbe can measure straight lines or curved surfaces, in metric or imperial units. Simply add up the rotations by counting out the clicking sound at the end of each full spin.

Why we like it: Smartphones can do many things, but measuring isn’t one of them. Rollbe’s genius is in finding a clever solution to an age-old problem – and one that doesn’t require recharging. 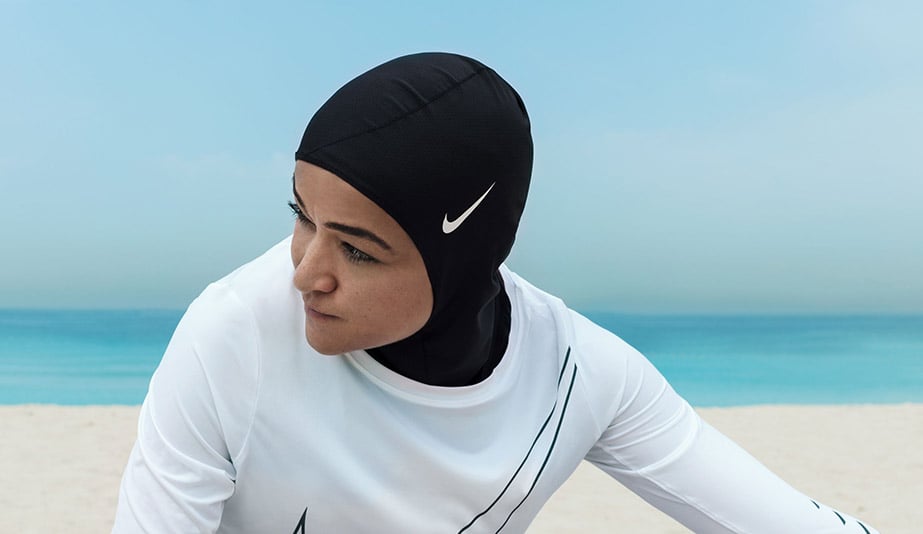 The Nike Pro Hijab, initially released in March, is a genuine fashion revolution. In addition to addressing the needs of an underserved group, the lighter, softer headwear for Muslim female athletes is a sports-tech breakthrough, combining Nike’s expertise for breathable fabrics with traditional Islamic garb. When Azure first wrote about the garment, the responses were mixed. Most readers noted its potential to make sports available to more Muslim women; others focused on arguments surrounding hijabs themselves. For Olympic runner Manal Rostom of Egypt (who wore the Nike Pro Hijab during the New York Marathon this fall), the garment not only enables her to run farther, it promises to “inspire girls worldwide to follow their passion for sport.” Tweaks made since its launch – to accommodate a range of head sizes and face shapes – have made it even more inclusive.

Why we like it: The Nike Pro Hijab is proof that good design can be an effective enabler of inclusivity. These days, it shows it can be morally imperative, too. 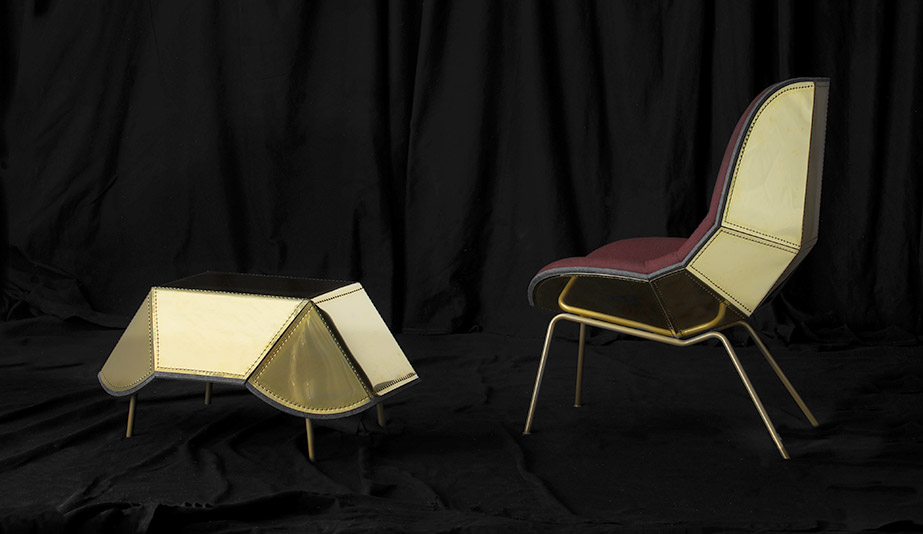 “Soft warriors” is how Fredrik Färg and Emma Marga Blanche describe their latest furniture collection, which includes this stitched-together metal chair and ottoman. After successfully finding a way to sew wood, the Swedish-French duo moved on to stitching brass and steel using heavy-duty yarn. The chair’s metal jacket is cut into shape using water jet spray, then folded before being stitched together by machine. Inspiration for the process arrived when the duo discovered the intricacies of samurai armour during a three-month artist-in-residence stay in Japan. “When samurai warriors prepare for battle,” says Blanche, “they attach all the armour parts together before adding the last shell.” The full collection of 10 objects, ranging from side tables to foot stools, was unveiled at Salone del Mobile in April.

Why we like it: Rarely does technique meet aesthetics in such an irresistible and inventive way. 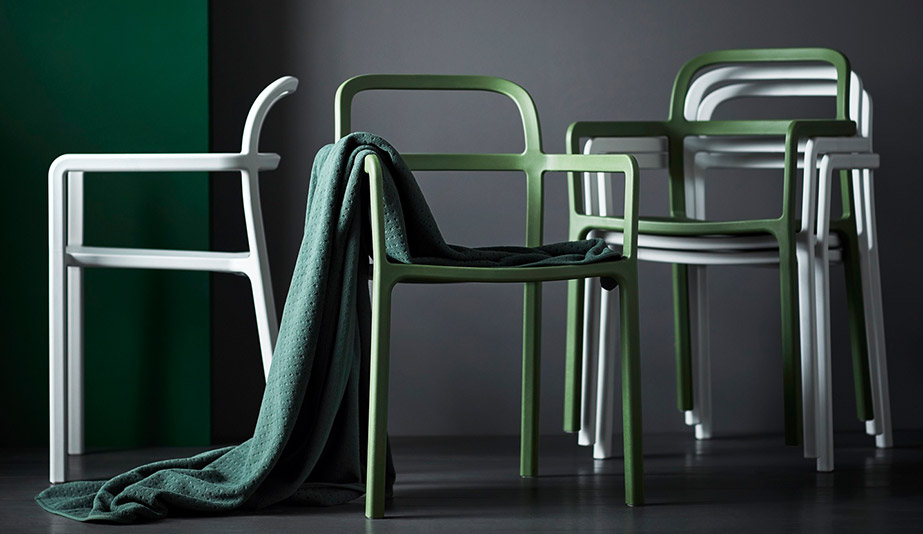 Released in October to rave reviews, Hay’s Ypperlig collection of compact furniture and colourful housewares for Ikea was a perfect merger, combining Hay’s sensibility for simple architectural lines and bold colours with Ikea’s flat-pack expertise. From the single-mould plastic chairs (shown) to the sleek black floor lamp with built-in touch dimmer, almost all of the pieces in the line (its name means “extraordinary” in Swedish) are desirable, although the best might be the most humble: Hay’s version of Ikea’s iconic blue shopping bag, which it reinterpreted in warmer colours and with an elegant weave pattern.

Why we like it: Many collabos tend to be gimmicky, but this one – between two of Scandinavia’s most popular home furnishings brands – has tapped the strengths of each, making the results more thoughtful than transitory. 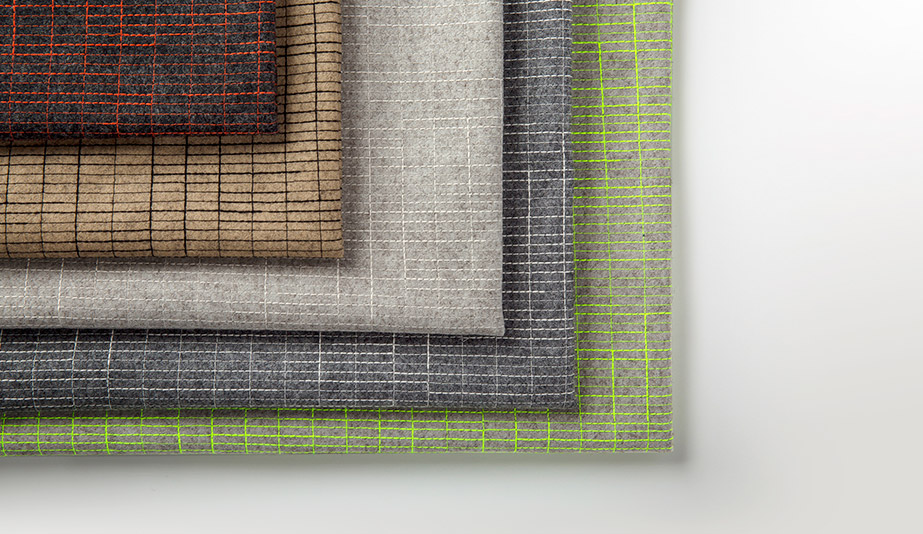 With physical barriers in workspaces coming down at a rapid rate, developing cohesive open spaces that foster creativity and comfort has become a major concern for the contract world. Suzanne Tick addresses this new office reality brilliantly with Focus In for Luum Textiles. Contract textiles tends to play it safe by leaning toward uniformly muted tones and unremarkable patterns. By contrast, Tick’s line of fabrics offers sophisticated palettes and bold patterns. The seven fabrics each have an identity of their own, either through high-performance weaves, nubby textures or eye-catching geometrics. Together, they create a streamlined aesthetic that is both inviting and natural.

Why we like it: While the collection as a whole works wonderfully, the hand-embroidered grid detailing of Navigate (shown) evokes architectural structures and a sense of movement. 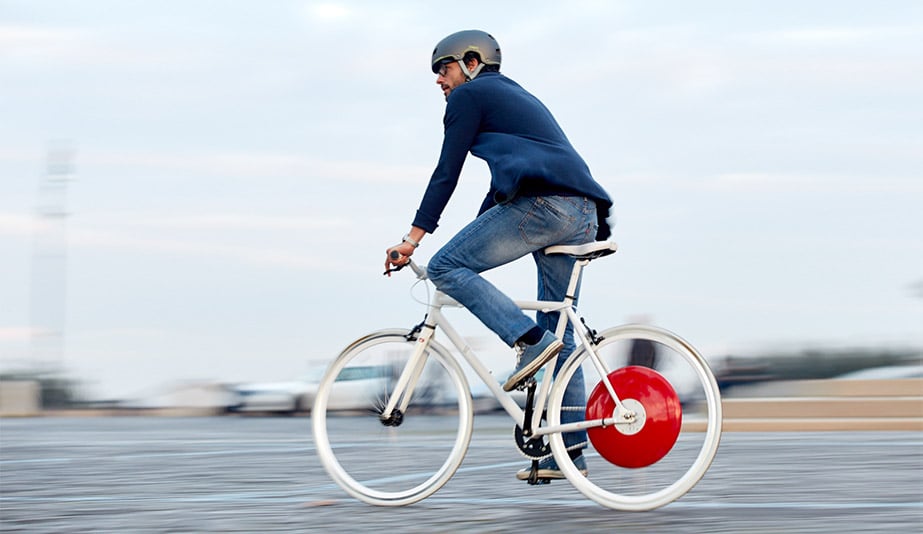 As a concept, The Copenhagen Wheel has been around for a while, showing up on blogs that have followed its development and progression. Its been called the Tesla of bikes, admired for its humble scale, clever design and for making uphill pedalling a thing of the past. Loaded with a motor, battery and sensor, the Copenhagen Wheel learns how a rider pedals, then gives him or her a power boost when needed. Originally developed by Senseable City Lab at MIT and Boston startup Superpedestrian, it replaces the back wheel of a bike, turning the velocipede into an electric hybrid. The wildly popular prototype – initially unveiled in 2009 at the United Nations Climate Change Conference – finally hit the market as a real product in October.

Why we like it: Now there’s no excuse for not riding to work.