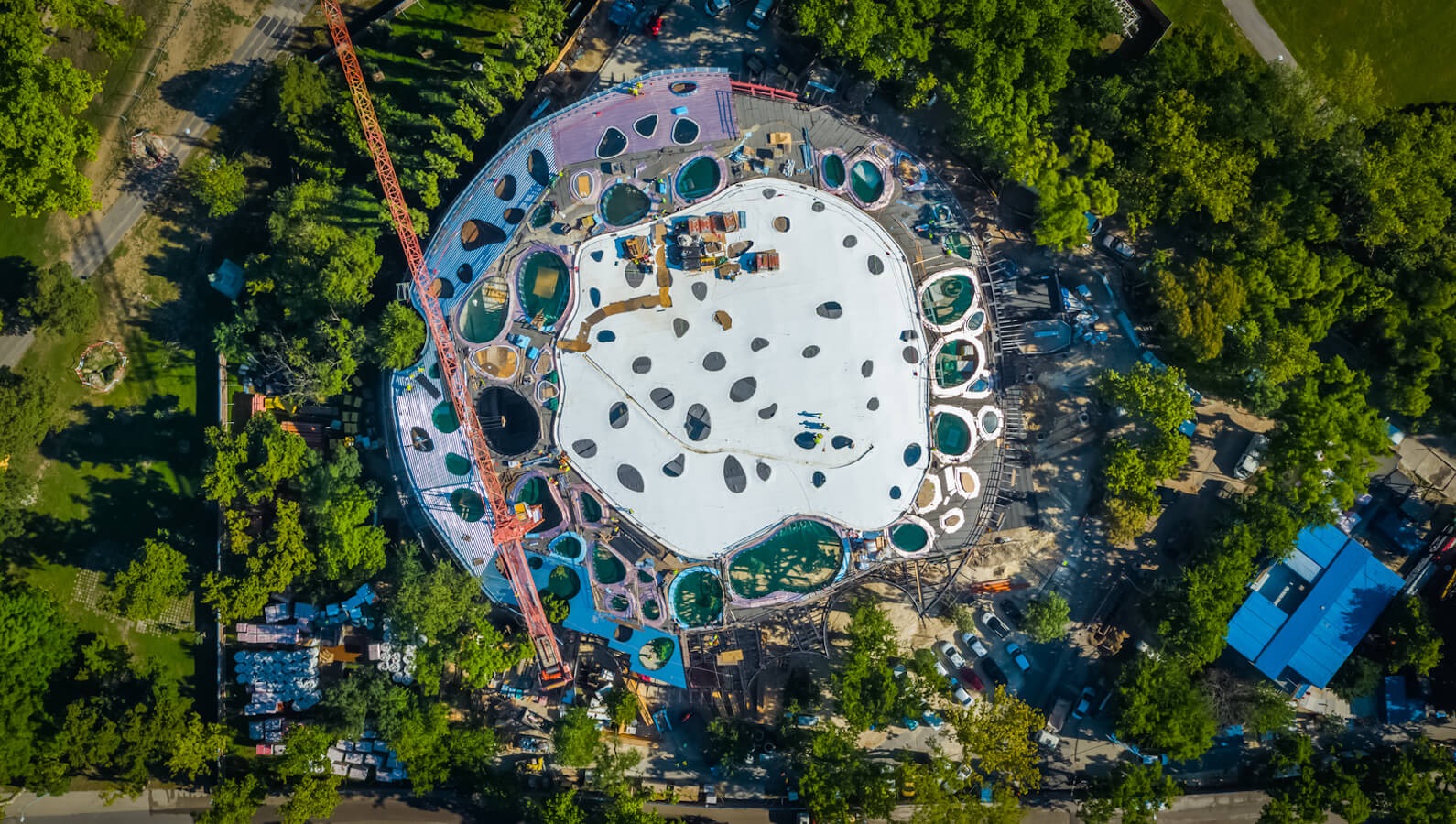 From transformative affordable housing to striking cultural venues and generous public spaces, these 10 architecture projects will capture the world’s attention in 2021.

In a world still in the throes of the COVID-19 pandemic, the design world’s attention was gripped by timely interventions – from PPE and mobile testing sites to sanitary surfaces — for much of the past year. But architecture moves on a slower timeline. The projects below are mostly long in the making, with the process from conception to construction often spanning well over a decade. And while their genesis predates the present moment, these designs offer a timely affirmation of our faith in the social and cultural power of architecture. In other words, our 10 most anticipated projects of 2021 are arriving just in time. 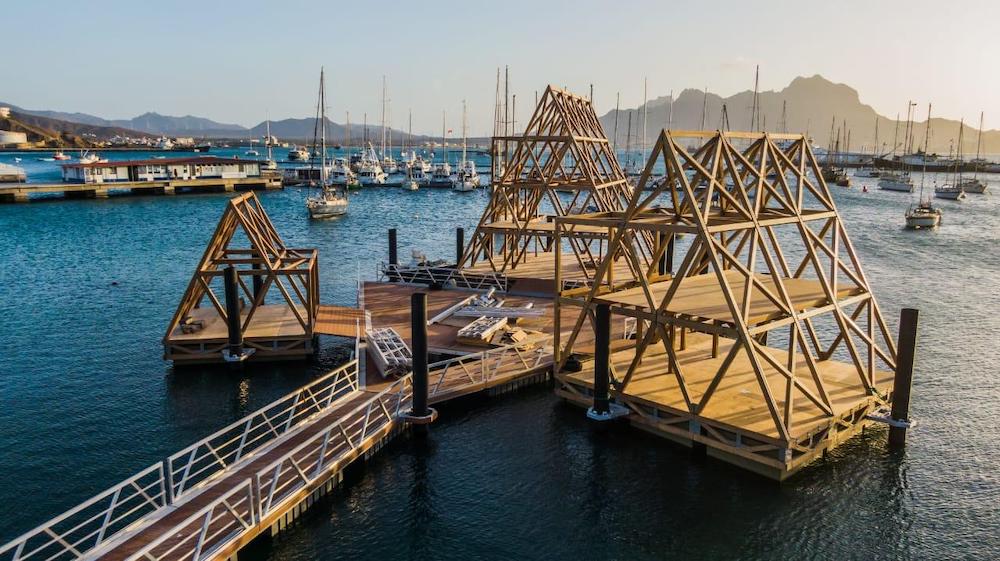 Since 2012, Nigerian architect and NLÉ founder Kunlé Adeyemi has been developing iteration after iteration of the Makoko Floating System: a scheme of rapidly-deployable prefabricated timber components. What began as an experimental prototype for the Makoko Floating School — an aquatic structure in the eponymous community within the lagoon of Lagos, the largest city in Nigeria — has since been remounted (and refined) at a number of international architecture biennials. Now, nestled in a quiet bay of the port city of Mindelo on the island of São Vicente (one of the 10 volcanic landmasses comprising the West African country Cape Verde), Adeyemi will install a permanent version of his design: the Floating Music Hub. Set to be completed this year, the 779-square-metre complex comprises three of the architect’s floating “vessels” of various scales that will house a performance hall, recording space and a small hospitality program, all connected by a triangular public plaza. 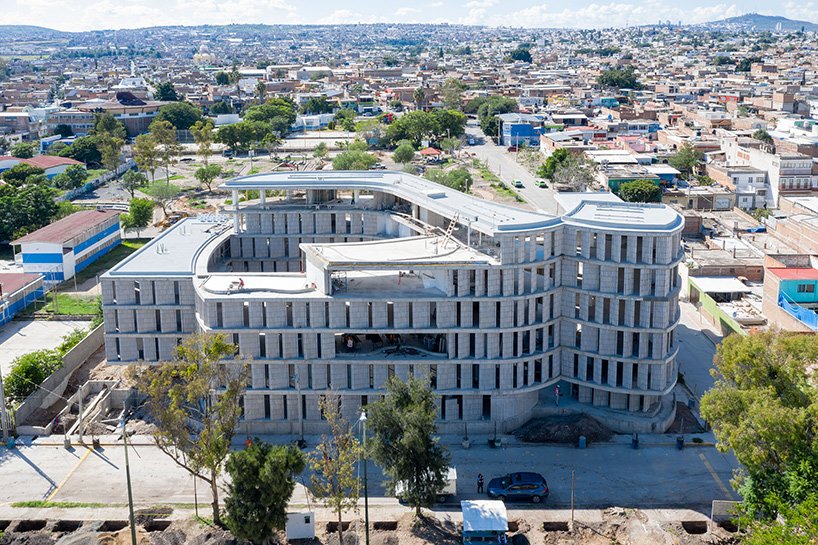 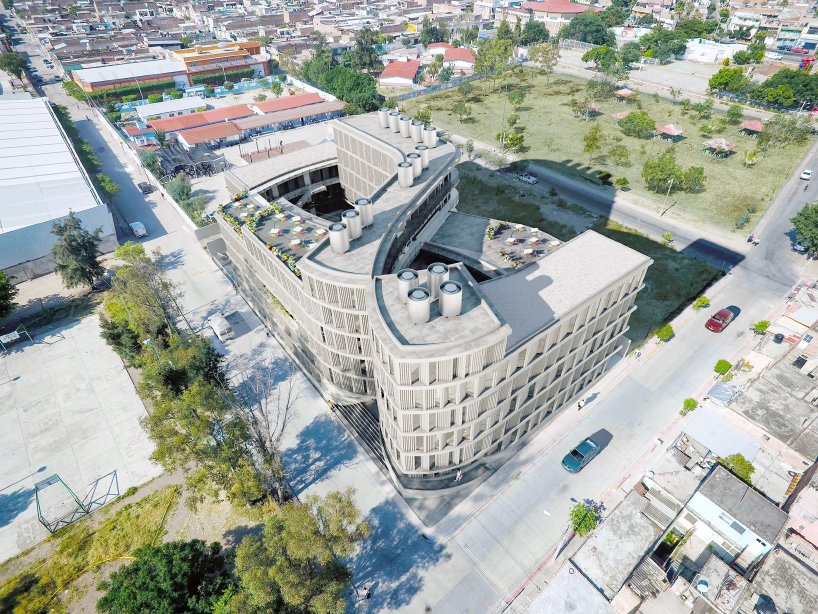 Rendering courtesy of SO – IL.

The 60-unit project is just the first step in a reinvention of the country’s social housing stock. Designed as a rapidly scalable urban infill prototype that supports multi-generational living, Las Americas represents an evolution in Mexico’s ambitious yet flawed approach to social housing, which has – until now – favoured dysfunctional suburban sprawl over mixed-use urban density. What’s more, the sinuous courtyard building is no cookie-cutter design: the inexpensive and easy-to-install custom brick allows a rich variety of bespoke facade patterns. 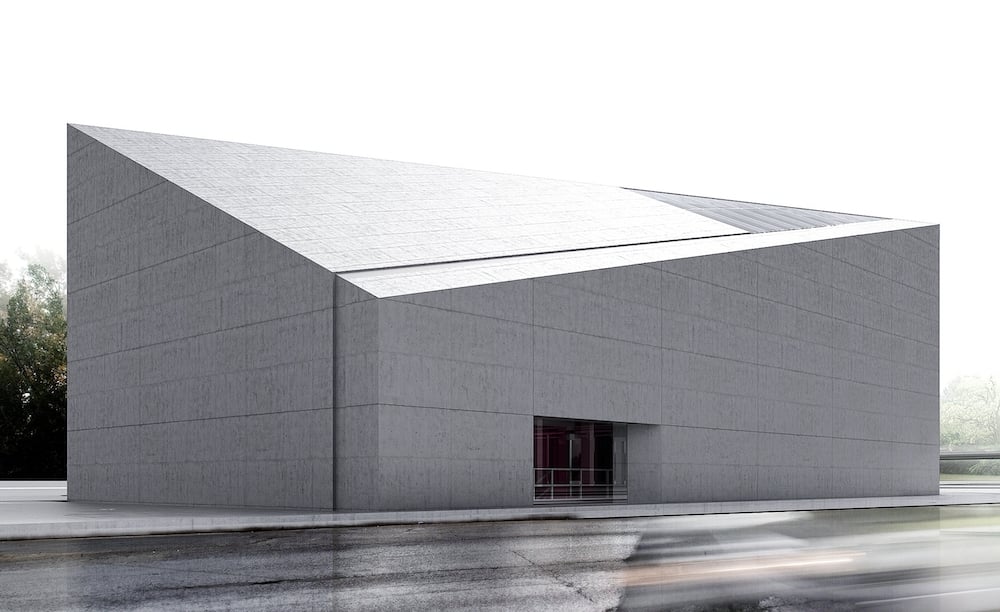 In a Toronto neighbourhood defined by converted 19th-century brick warehouses and sleek glass condos, award-winning local studio gh3*’s bunker-like Storm Water Quality Facility is set to become a unique and imposing landmark. Following in the footsteps of the city’s numerous iconic infrastructure projects (from the massive Hearn Power Station to the art deco R.C. Harris Treatment Plant), the faceted 279-square-metre concrete structure similarly marries cutting-edge aesthetics with state-of-the-art processes. Its austere form and monolithic skin conceal a discrete four-part water treatment scheme — a strikingly simple choreography of elements that will purify urban runoff from the new West Don Lands development and return it back to nearby Lake Ontario. 10 years in the making, it’s been well worth the wait. 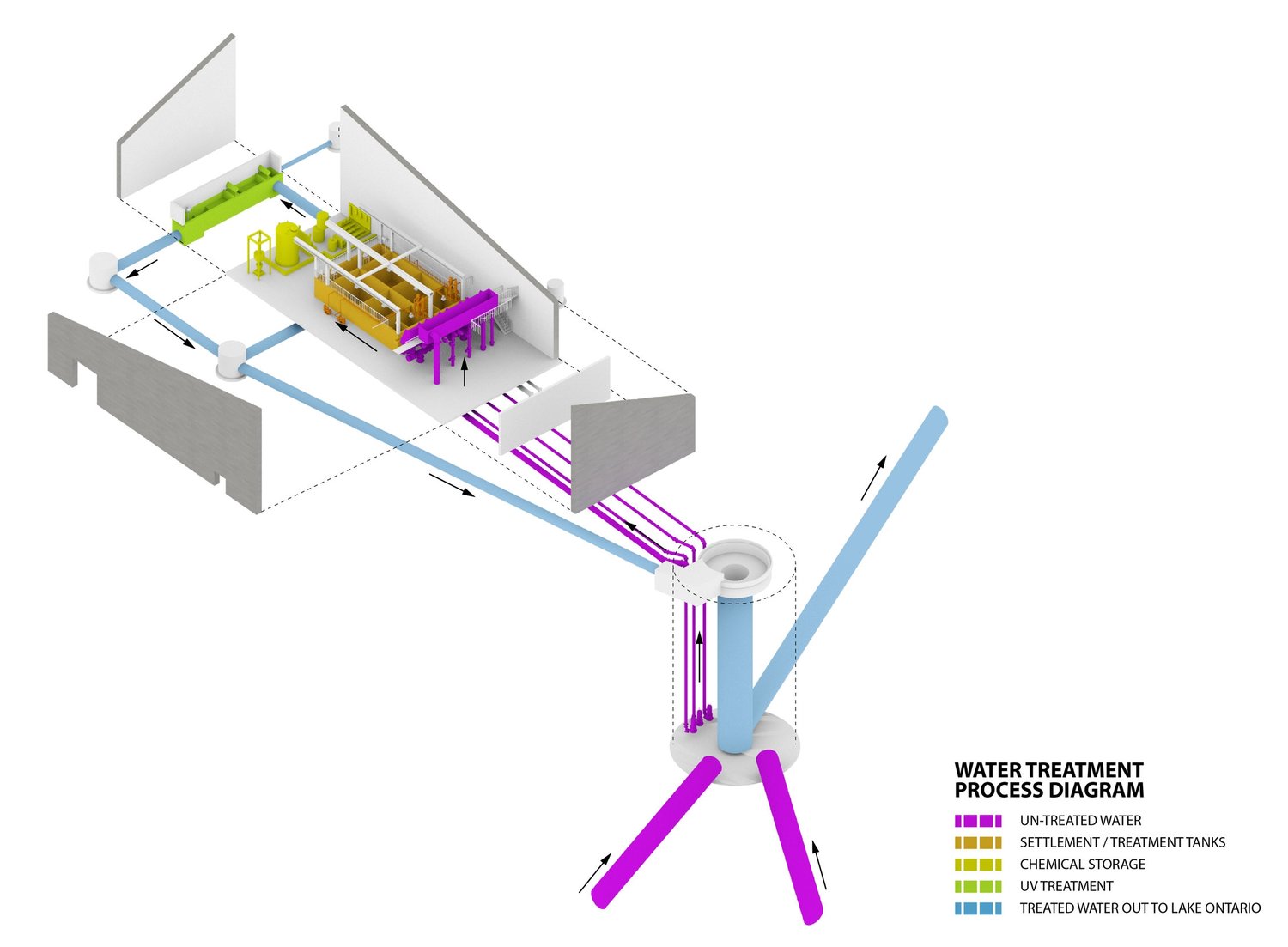 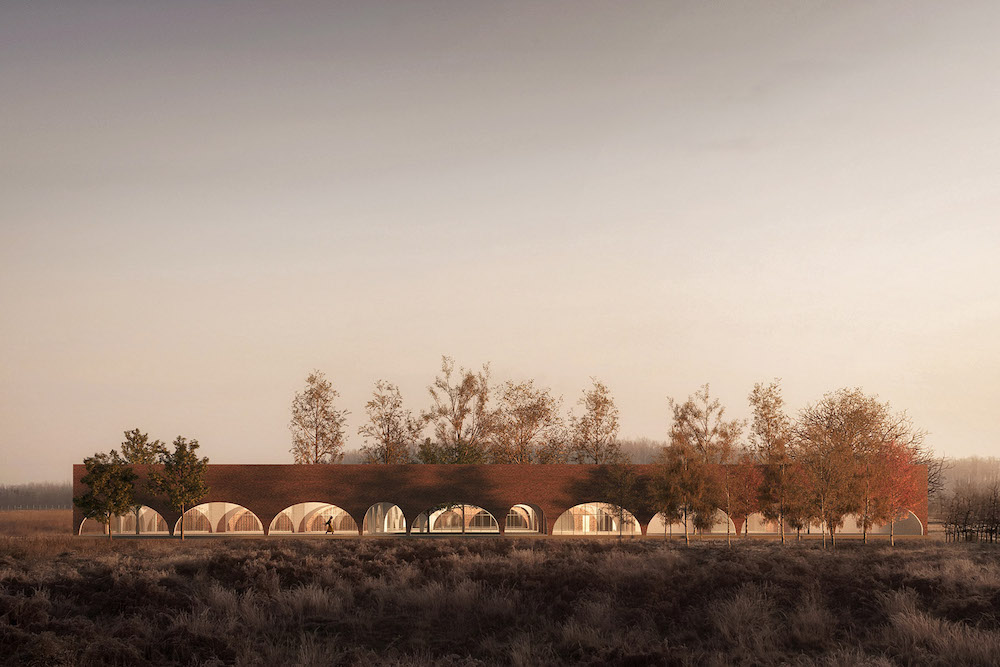 Discreet and considerate of its surroundings, the new Hermés Atelier is more than artisanal studio space. Designed by Lebanese-French architect Lina Ghotmeh, the low-slung building adheres to the luxury leather goods brand’s ethos to preserve tradition while at the same time minimizing impact on the environment. Utilizing a restricted materials palette of glass, wood and locally made brick by a manufacturer that dates back to the 1800s, Ghotmeh’s passive structure seamlessly merges with the terrain — a former brownfield that has been sensitively transformed by landscape architect Erik Dhont — and will produce more energy than it consumes. 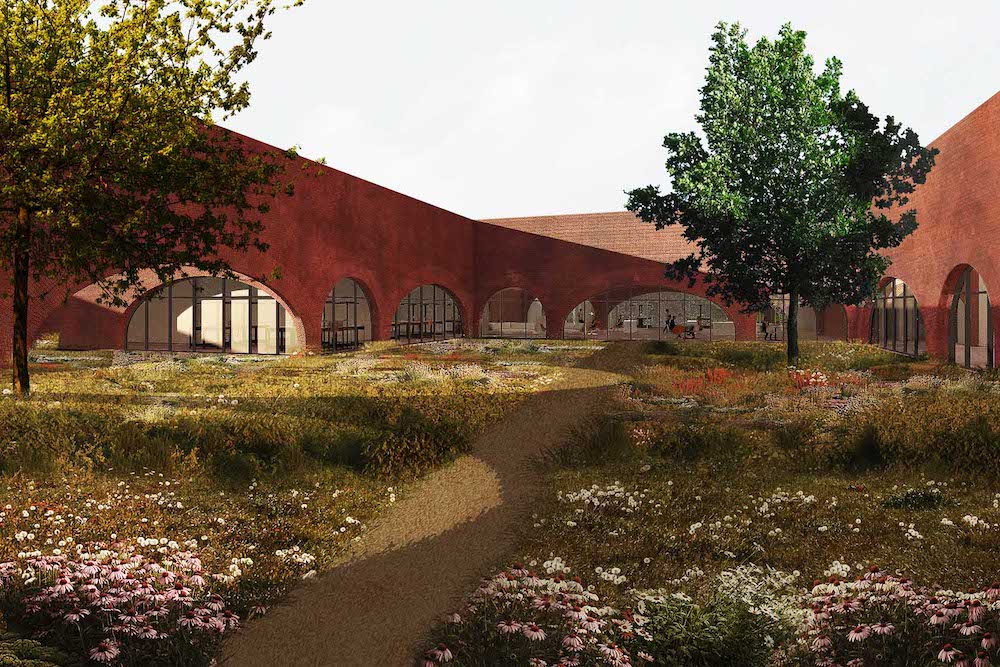 A 6,700-square-metre workshop for the production of leather bags, objects, saddles and bridles, the flat roof building’s orthogonal layout is framed by a continuous series of differently sized arches, the positioning of which, and combined with carefully placed ceiling apertures, will flood the interiors with ample amounts of museum-quality natural light. Well-crafted and well-considered, the Hermès Atelier’s almost poetic architecture successfully conveys the notion that a net-zero building can be technically advanced as well as just plain beautiful. 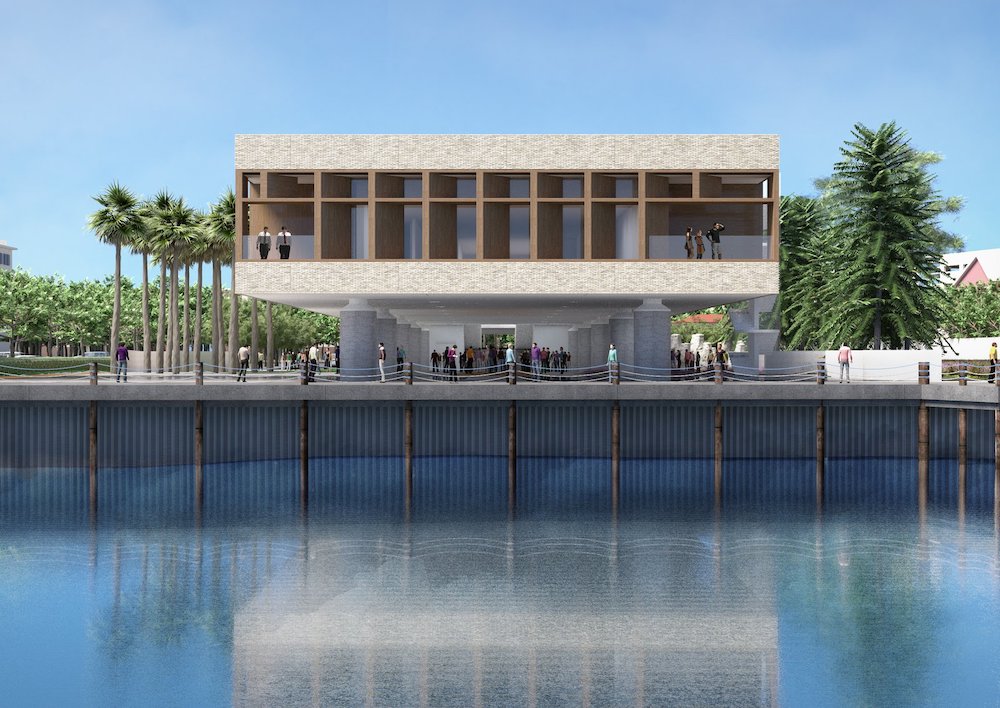 On the site of Charleston, South Carolina’s former Gadsden’s Wharf – the first destination for 100,000 enslaved Africans during the peak of the slave trade – the International African American Museum is an important project that uses architecture and landscape to tell the narrative of the African American experience. Pei Cobb Freed & Partners designed the one-storey building, which stretches 130 metres, atop a double row of four-metre-high cylindrical columns. It’s clad in warm brick on its north and south sides, while its east and west ends are enclosed in clear glass shaded by angled wooden louvres. Inside, the exhibits will include the story of the slave trade and the African diaspora as well as the “spread of African American culture and influence, and the movements for justice and equality.” But the landscape – by Walter Hood – also goes a long way to conveying the site’s relevance to this history. The design of its shallow reflecting pool is based a motif from the Brooks Map, a document illustrating how captured Africans were loaded onto slave ships. 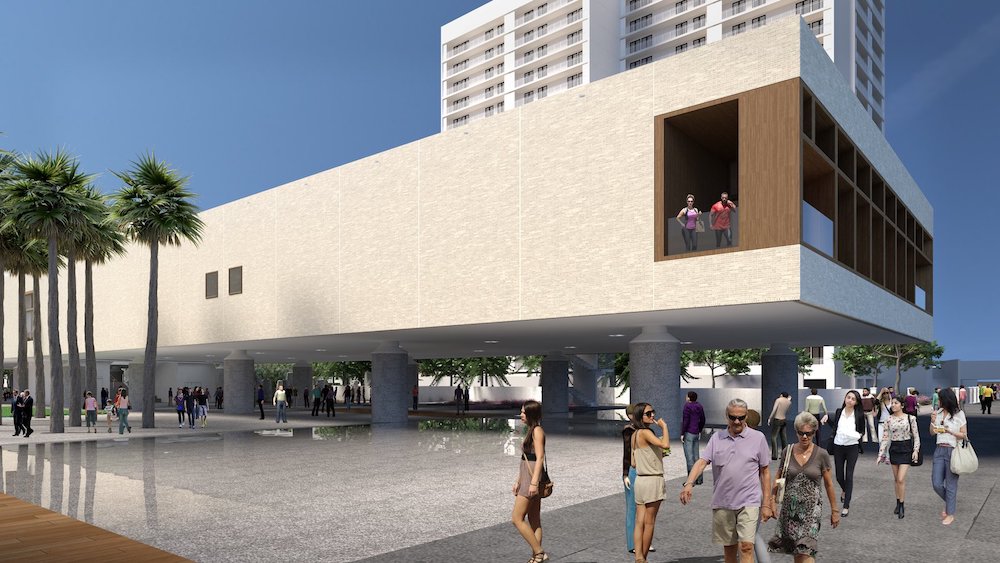 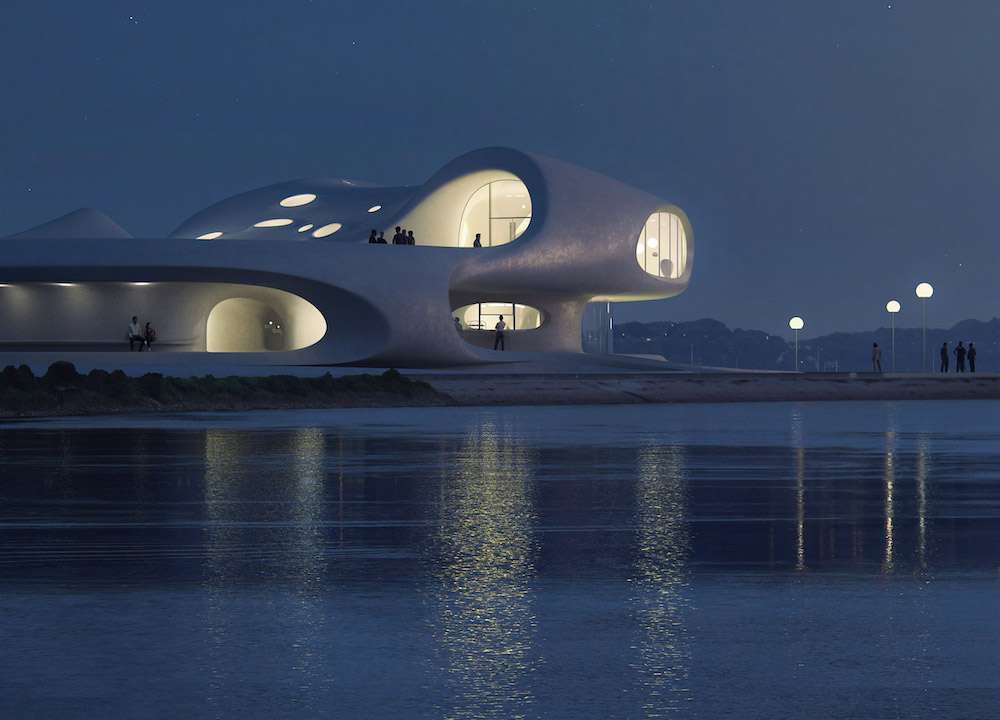 Wormholes have slangily been associated with the Internet of late, so it’s nice to see, as lovers of books, the concept appropriated for a library — the original attention-grabber! And what a wormhole this one will be. Designed by MAD Architects as part of the Chinese city of Haikou’s coastline rejuvenation plan, the voluptuously curved, 1,380-square-metre facility sits dramatically on the shore of the South China Sea, its sinuous white-concrete structure cast with both a CNC and a 3D printed model to ensure seamlessness. To allow the architecture to breathe, holes of varying sizes puncture the building, letting natural light flood the interior in the process. Exterior corridors, meanwhile, provide shaded areas for visitors to pause and rest. 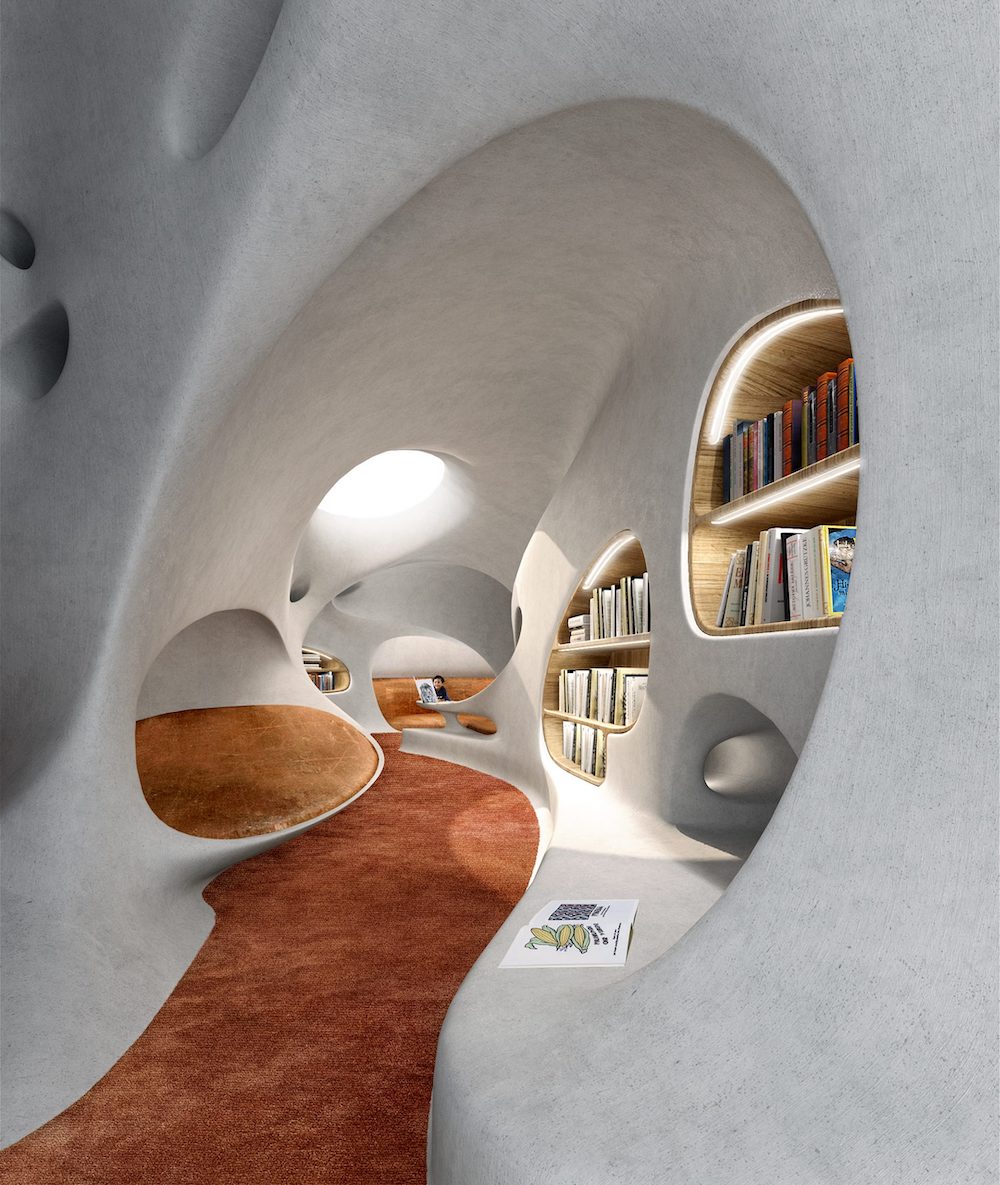 Inside, the facility is divided into two distinct parts — a 690-square-metre reading space, cafe and terrace and a 300-square-metre public rest area containing a bicycle parking system, bathrooms and showers — even as it twists and turns across its floor plate, evoking a literal wormhole as well as a conceptual one. When the library is completed later this year, it’ll be the first in a planned series of seaside projects in Haikou by prominent architects. They already have a tough act to follow. 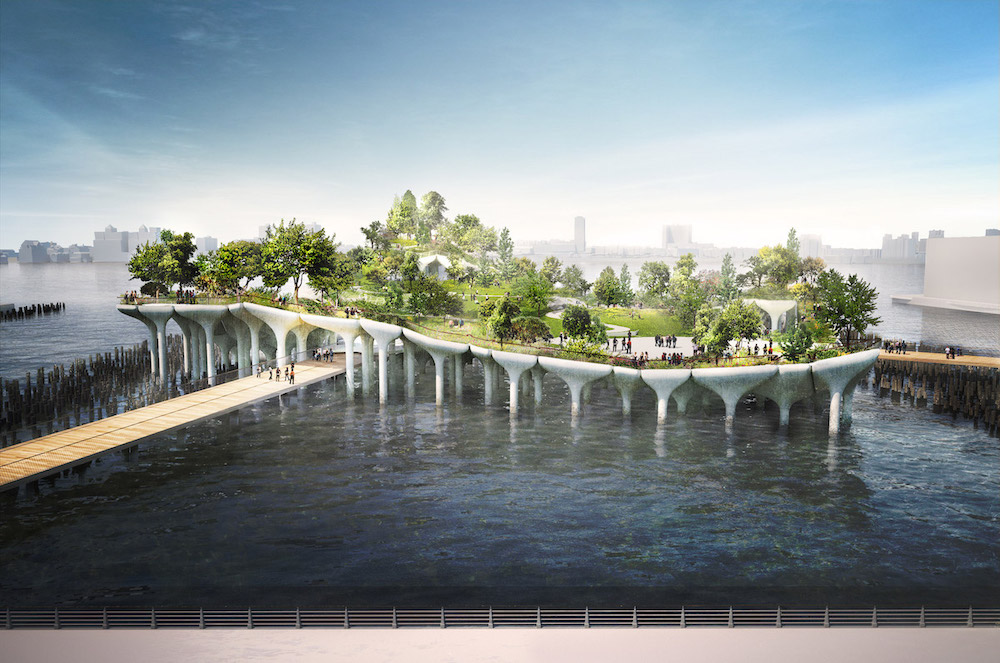 After a seven-year saga of starts and stops, New York’s controversial “Little Island” (formerly known as Pier 55) is finally edging towards a spring completion. Designed by Thomas Heatherwick in collaboration with Mathews Nielsen Landscape Architects, the landscape rising from the Hudson River is one of the most anticipated projects in the world. And, however you feel about the polarizing Heatherwick, it’s pretty extraordinary. Comprised of 132 mushroom-shaped concrete pots supported on concrete columns of various heights – resulting in a range of elevations from 4.5 to 19 metres – the staggered topography will be home to 100 species of trees and plants. It also promises various types of experiences (even if some will be postponed in light of the pandemic), with its three outdoor performance spaces, including an 800-seat amphitheatre, and multiple viewing platforms. It might just become so popular that people will forget its hefty price tag — a whopping US$250million, which is a far cry from the US$35million originally projected in 2014. 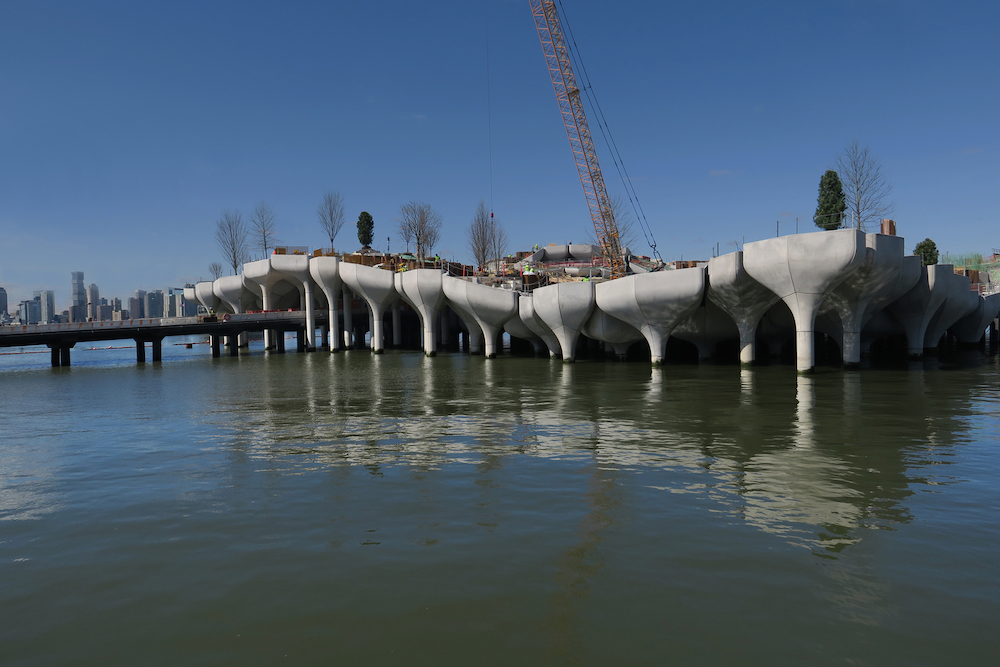 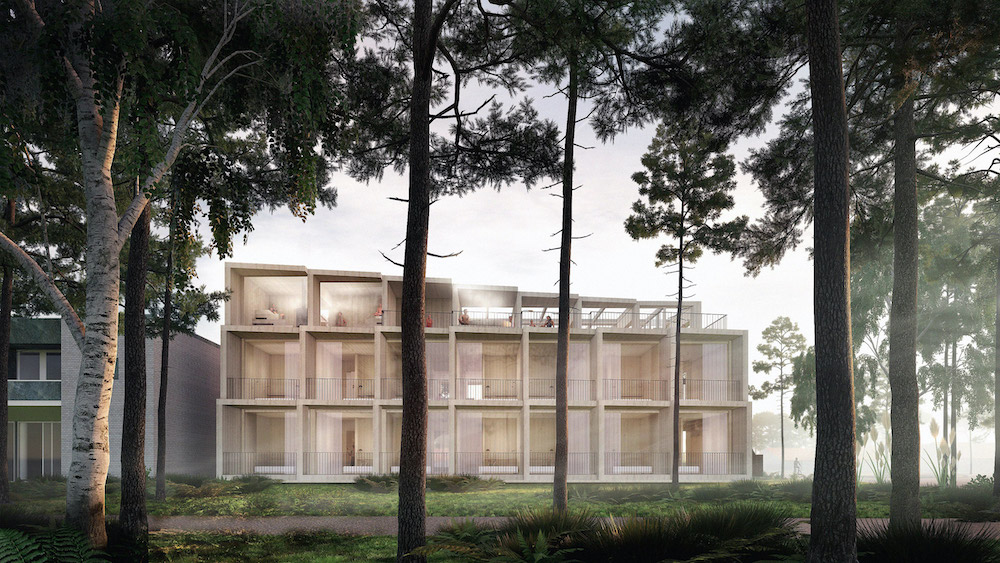 On Denmark’s island of Bornholm, a tiny hotel focused on circular sustainability is going well beyond net zero. Green Solution House has been operating since 2015; in 2021, the hotel will be unveiling a new wing and taking their ecological efforts to a new level. Designed by architects 3XN together with their in-house green think tank GXN, the new building’s structure is made of wood; inside, upcycled waste products — harnessed from the building’s own offcut as well as local granite quarries — are used to create furniture and surfaces. Each of the structural components is also constructed with reversible joints, allowing the cross-laminated timber structure to be disassembled and reused when the hotel becomes obsolete. In another advance for the country’s pioneering green architecture, the naturally ventilated 24-room wing will be the first hotel building in Denmark to boast a net negative carbon footprint. 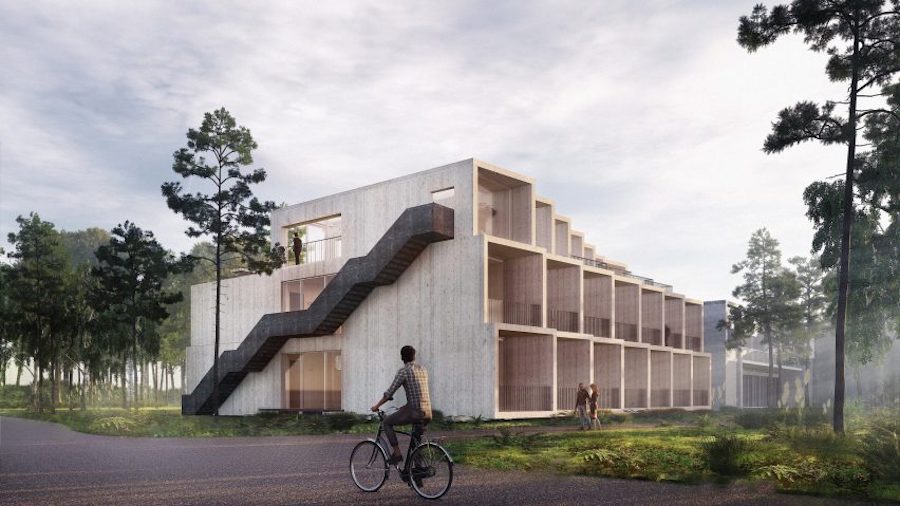 On a prominent lakeside site in central Budapest’s City Park, the new House of Hungarian Music will be an icon. Now nearing completion in the Hungarian capital, the 3,000-square-metre cultural complex offers an astonishingly deft integration of the natural and built environments, with the porous and seemingly floating roof allowing trees to grow through the heart of the structure. Promising a venue like no other, the flexible space will host concerts, exhibitions, music lessons and informal gatherings.

As architect Sou Fujimoto puts it, “we are not only creating a building but also activating the park experience within the house itself.” Atop a transparent glass facade that gracefully slides into the park around it, its showpiece roof is a bold structural and acoustic innovation. More importantly, it all conveys a rare sense of wonder and whimsy. Like music itself, it is a melodious work of art.

Named after Chinese ballet dancer Yang Liping, this centre in Dali, China has been in the works for almost five years. Studio Pei-Zhu’s design unfolds a a free-flowing space where the boundaries between indoor and outdoor are blurred. Tucked in on a plateau between the Cangshan mountain range and Erhai lake, the building’s integrated striated topography and grassy hills artfully reflect the local landscape. The cantilevered roof’s shape also mimics the hills and valleys of the surrounding area, elevating the project’s acute sense of genius loci. Inside the plaza, an indoor theatre (Yin) and an outdoor theatre (Yang) allow for hybrid performances, while a woven façade lets in elegantly fragmented sunlight. 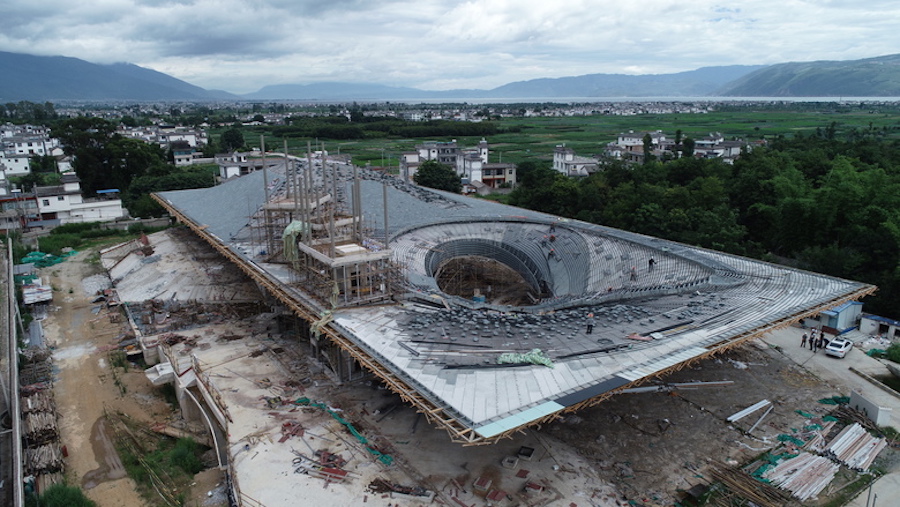 From transformative affordable housing to striking cultural venues and generous public spaces, these 10 architecture projects will capture the world’s attention in 2021.