1024 Architecture Illuminates Paris’s Underpasses
The Paris firm 1024 Architecture has installed a pair of dynamic lighting installations - called Delta - to reclaim the dark underpasses of Boulevard Périphérique for pedestrians and cyclists. 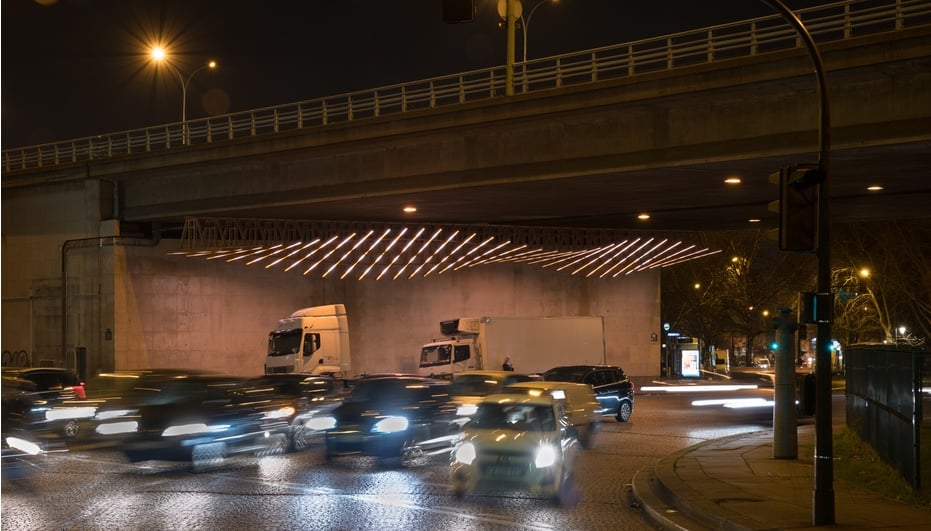 Paris is one of the most beautiful cities on earth, but even Paris needs the infrastructure to accommodate heavy traffic. And so, in the middle of the last century, the city erected its famous Boulevard Périphérique, a ring road that roughly follows Paris’s administrative limits.

While the Périph enables drivers to circumnavigate the city centre in minutes, it also has its drawbacks – not least of which is that its construction severed the city centre from the suburbs with highway overpasses that lack the old-world charm Paris is known for. 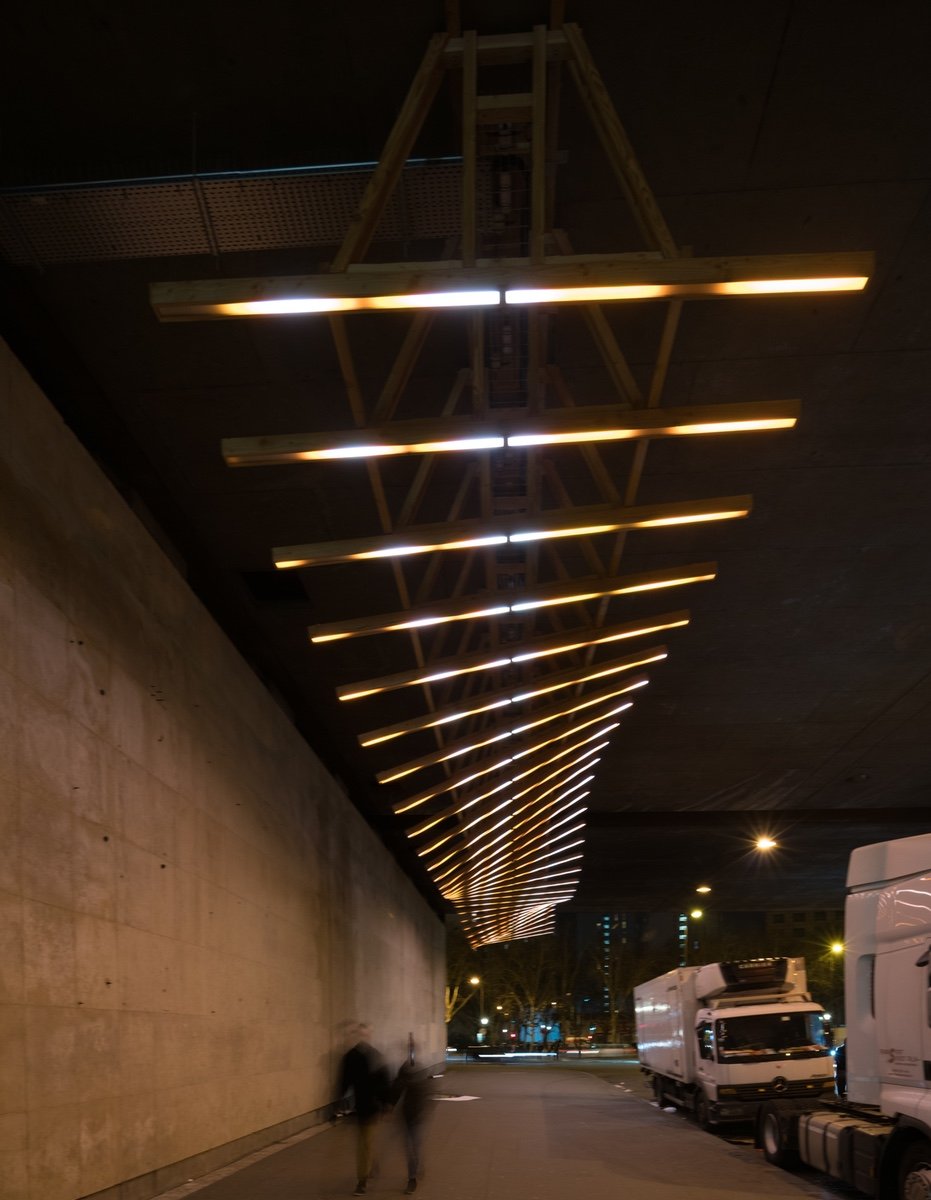 Local multidisciplinary firm 1024 Architecture is stitching that divide back together again with Delta, a pair of installations that completely re-characterize the pedestrian underpasses connecting Paris’s 19th arrondissement to two suburbs on the other side of the Périph. Installed at the same time as a new bicycle lane, Delta is part of an effort to humanize a space that was initially designed solely for vehicles, and to reclaim it for other types of users, animating and humanizing what was until recently a darkened concrete tunnel and making the nighttime walk beneath the Périph more welcoming. 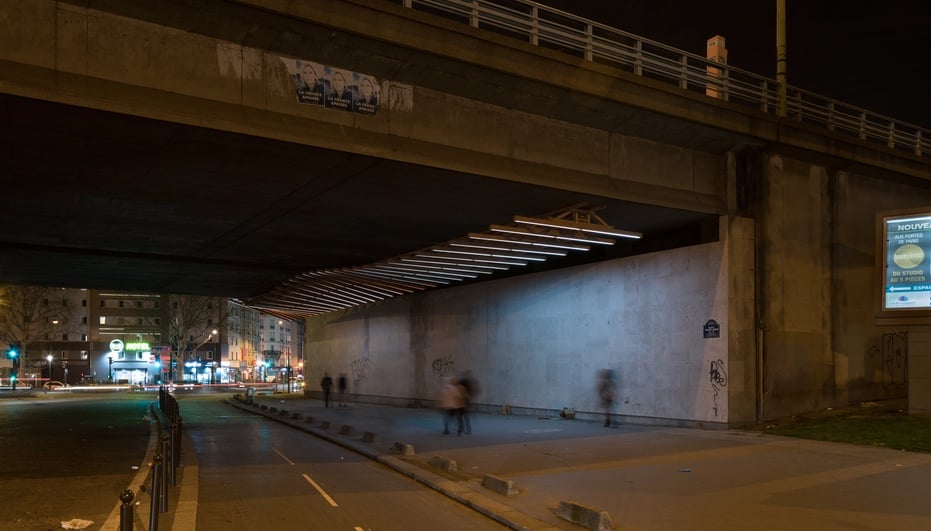 In Porte de la Villette, at the two points where the Périph bisects the busy roundabout of Place Auguste Baron, 1024 has installed what it calls a “digital zebra.” Each of the pair of installations comprises 32 horizontal wooden porticoes affixed to the underside of the Périph, running in a line above the sidewalk and bicycle lane. These four-metre-wide beams are equipped with warm- or cool-tinted LEDs that light up in ever-changing patterns – waves of light that usher pedestrians and cyclists through the underpass.

Rather than static lighting – the kind of glaring spotlights that make pedestrians feel uncomfortable – Delta’s waves of lights are generated dynamically and in real time, responding to the movements of pedestrians and cyclists through the space, and encouraging them to look up and take in their surroundings.

The patterns that light up the installations evoke the “chronophotographs” of 19th-century photographer Étienne-Jules Marrey, especially his “La Machine Animale” series. And, at regular intervals, the LED arrays sparkle for five minutes, synchronized to the strobe lights that animate the Eiffel Tower at the start of each hour. 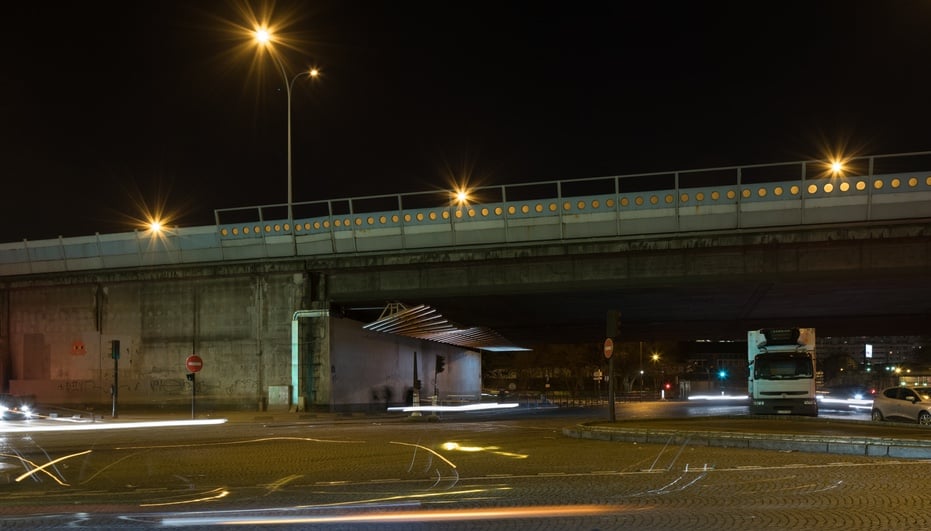