second instalment of Azure’s exploration into future-­forward travel ideas. Check out the first part of this feature package here. 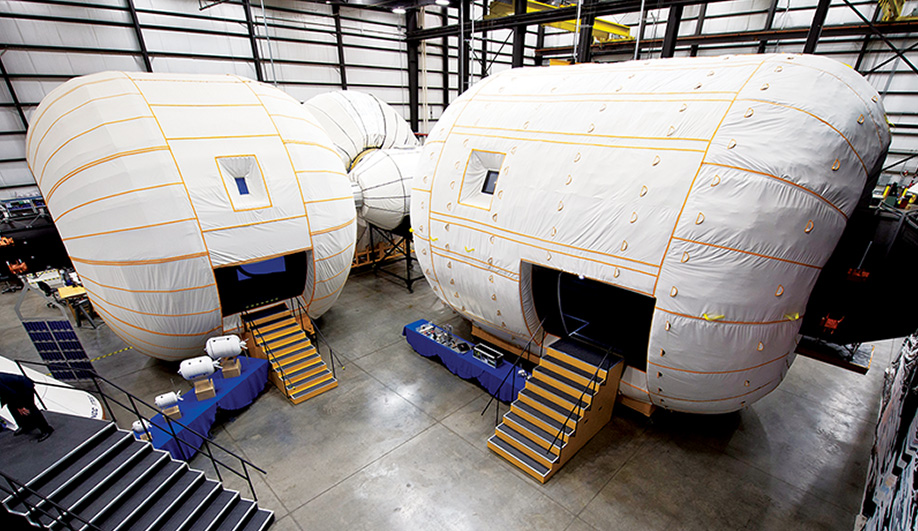 1 Living among the stars
Since 1999, Bigelow Aerospace has been engineering inflatable habitats that could bring us the world’s first space hotel. The marshmallow-shaped units, made with several layers of Vectran (a material twice as durable as Kevlar), are designed to ship in compact form, then inflate among the stars. Each module, the smallest of which meas­ures 330 cubic metres, will allow for flexible configurations by linking up into a chain of modules. The company plans to send a cluster of its pods into orbit later this decade, then lease them out to educational institutions and aerospace companies, or possibly to vacationers with pockets deep enough to match their other­worldly aspirations (the estimated cost starts at $US50 million per person). Bigelow anticipates hosting visitors in 90‑day shifts, with a staff of professional astronauts on board. The first stage of real-space testing is set to launch this year, with one module floating in orbit for two years. But the plan hinges on how to get there and back, now in the works as the Las Vegas company seeks a private contractor to manage logistics. – Popi Bowman 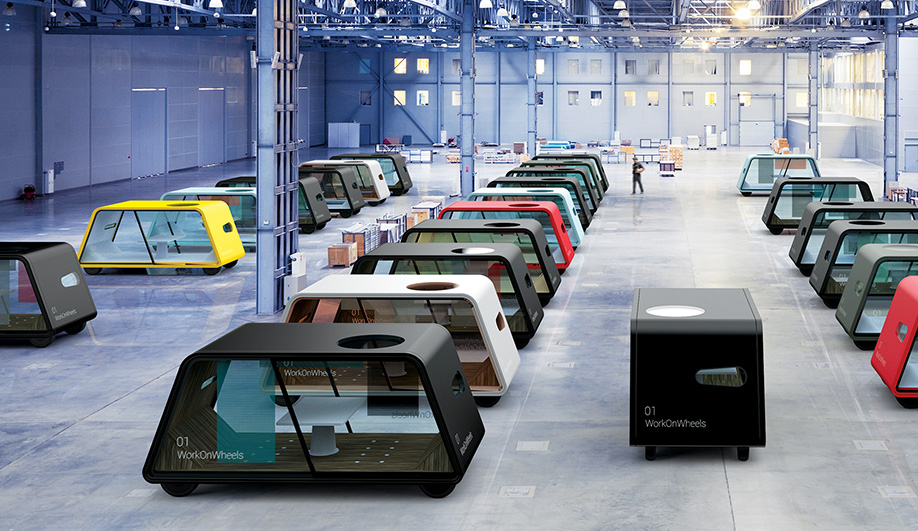 2 Cars that drive themselves
Leading design consultancy IDEO of California is among the many think tanks that are exploring how autonomous vehicles will transform our lives in the coming decades. One major change may be WOW, or working on wheels, where self-driving cars will provide us with our own mobile offices that follow a programmed route, letting us tend to the day’s emails as we glide along streets and highways. The smart car will compile information from passenger phones to suggest destinations of interest, or sync up with other vehicles for car-to-car communications. But the potential for innovation reaches even further, as IDEO sees it: self-driving delivery trucks will share our roads, dropping off packages wherever we may be. While all of this sounds magically futuristic, the technology is being road tested by many automotive manufacturers, and by Google, which has logged over one million accident-free kilometres with its driverless Street View cars. – P.B. 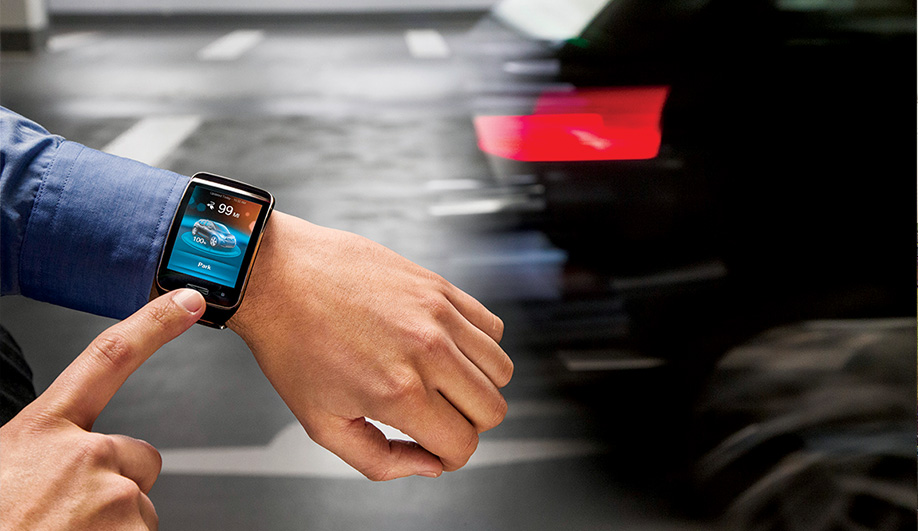 3 Cars that park themselves
Self-parking cars may still be five to eight years away, but they are the likely next step before self-driving vehicles fulfill our travel dreams. At the Consumer Electronics Show in Las Vegas this January, BMW demonstrated its Remote Valet Parking Assistant, whereby an i3 electric car embedded with ultrasonic sensors parked itself in an enclosed garage. The prototype uses a Samsung smart watch to issue commands, and with a map of the garage it locates a spot. According to Engadget editor Sean Cooper, who tested it out at CES, the technology works “flawlessly,” adjusting back and forth to achieve perfect alignment with the curb. Better yet, it can un-park itself and pick you up wherever you are. Or simply ask it to “make some noise” using the watch, and the horn honks so you can find your car. – Catherine Osborne

4 The portal chair
Patricia Urquiola’s Portal chair, launched last December at Miami Art Basel, makes as much of a poetic statement about mental transportation as it is does about mobility. Produced as a limited edition by Moroso, the two-wheel design riffs on luggage carts used by porters in hotels and airport terminals. The seat belongs to a unique series the Italian furniture company is creating to help fund the Marina Abramovic Institute, a school founded in New York by the legendary performance artist and devoted to “enduranced-based art.” – C.O. 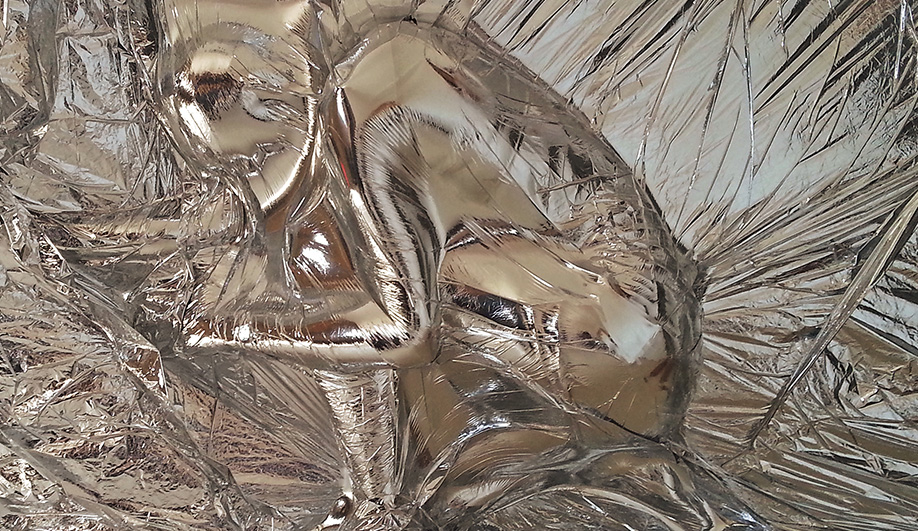 5 Simulated space travel
London artist Lucy McRae’s out-of-office response reads a bit like a letter from Mars: “I am on expedition (body recuper­ation process) with no access to email.” The Australian “body architect” and former classical ballerina likes to play with future scenarios where body and technology collide. At the 2014 London Design Festival, she explored the not-too-distant possibility of interplanetary voyages with an interactive installation that simulates space travel and zero gravity. Wannabe astronauts were asked to remove their shoes and lie on a board before being draped in a silver foil membrane that then had the air sucked out of it. Designed to replicate early techniques developed by NASA to improve biological responses to weightlessness, the artist’s space experiment was really an exercise in capturing the imagination. Watching the gently dancing, tightly wrapped forms in the chamber produced a meditative experience: the foil became a second skin, the bodies cosmic sculptures. – Giovanna Dunmall 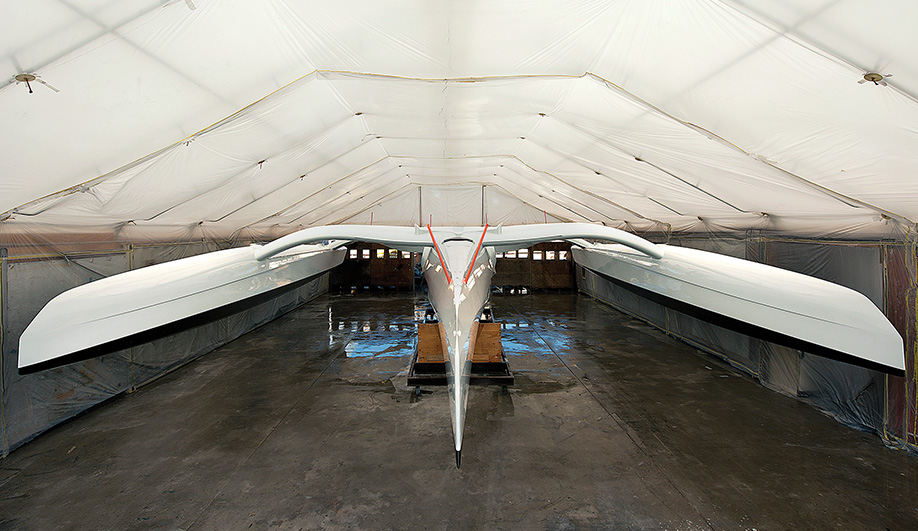 6 The thrill of speed
In a field as ancient as shipbuilding, change is often incre­men­tal, but the goal remains the same: how to make a boat weigh less and go faster. The GF42, a 13-metre-long racing yacht, is now being built by Los Angeles architect and sailing enthusiast Greg Lynn, who has dabbled seriously in high-­performance racing for the past 15 years. He and collaborators Fred Courouble and Hervé Devaux (an expert in calculating stress loads on trimarans) conceived of a foil-shaped hull whose profile pushes it above the waterline, reducing drag; while the carbon fibre construction dramat­ic­ally reduces the boat’s weight. The result is a racer that reaches speeds of up to 30 knots.

“Even when the wind is behind us, the boat sails 1.7 times faster then the wind,” says Lynn. Early tests made by towing the yacht have shown promise, and he hopes to officially launch it this spring. “Once we hit 16 kilometres per hour, it starts to lift out of the water and foil above the waves. I can’t wait to start doing that under wind power.” – David Dick‑Agnew 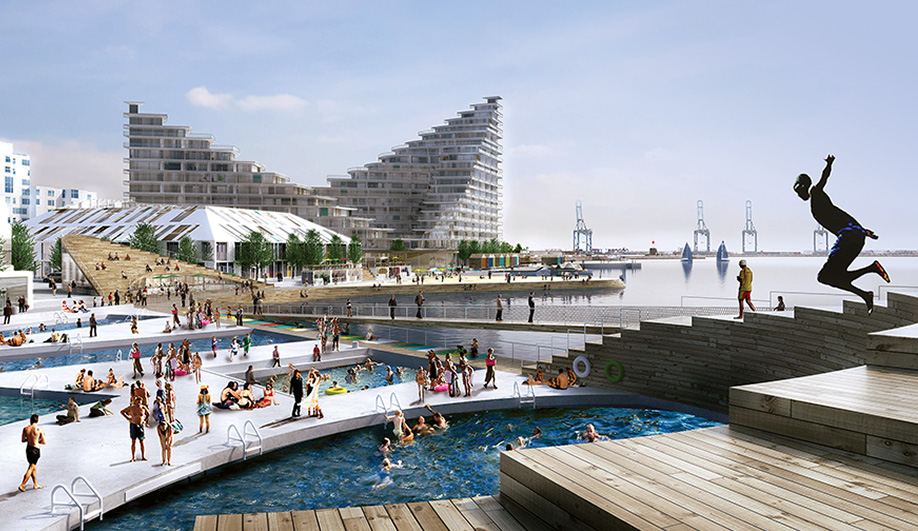 7 Urban swimming
In Aarhus, Denmark’s second-largest city, Basin 7 provides the kind of clean slate that urban planners love: an area of former industrial docklands, now detoxed, looking out over the Kattegat Sea. It’s typical to fill in urban pockets like these with residential developments and add the amenities later. City planners from Aarhus and a consortium headed by Bjarke Ingels Group have flipped the paradigm, proposing an impressive string of cultural and recreational attractions – theatres, cafés, and various bathing areas, including a beach and an outdoor pool – that will connect to a winding promenade, creating an enviable destination for locals and visitors alike. According to mayor Jacob Bundsgaard, “The urban space activities have been thought through first, and are ideally positioned when it comes to wind and sun, and situated toward the attractive water basin.” The project is expected to reach completion in time to host the International Sailing Federation world championships in 2018. – D.D.A. 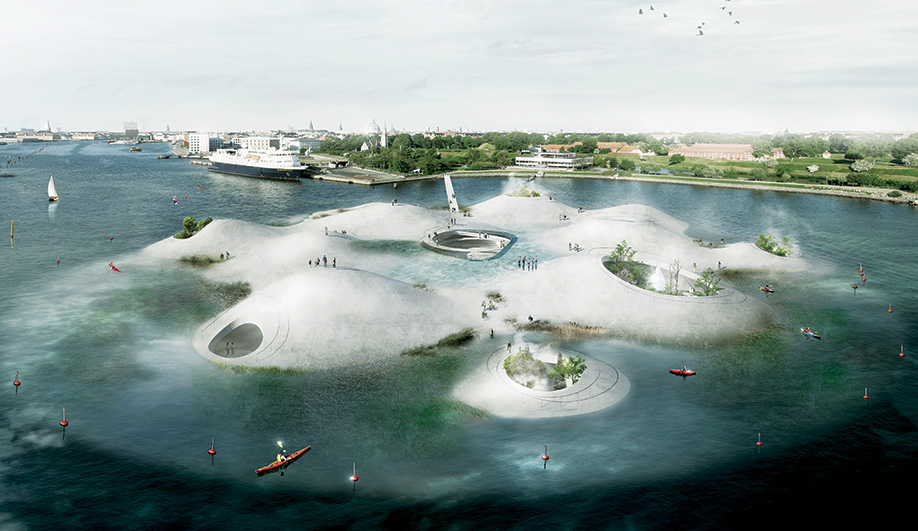 8 Urban water worlds
A growing trend in waterfront development is something called aquaforming, or turning a city’s extant lakes and rivers into slick leisure and sports facilities. Urban Plunge, an exhibit at London’s Roca Gallery, gathered a few intriguing concepts that have garnered attention in recent years. One of the most impressive is House of Water (shown), by Danish firm Tredje Natur, where a series of dreamy islands contains various recreational options and a waterfowl sanctuary. While the project will likely never be realized, a more modest version, the +Pool, conceived in New York and also featured in the Roca show, could be the first step toward a true global movement in aquaforming. The swimming pool, shaped like a plus sign, is designed to filter river water to be clean enough to swim in. With such prominent backers as High Line co-founder Josh David and engineering consultants Arup championing the plan, the pool is expected to open as soon as summer 2017. – Bert Archer 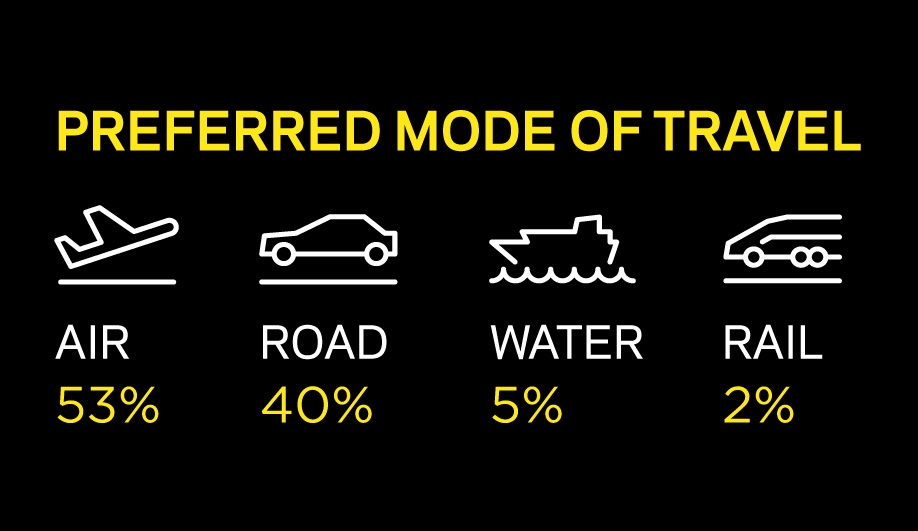 9 The invisible traveller
Five new apps to help you navigate unfamiliar destinations like a pro: To stave off jet lag, Entrain resets your sleep cycle, tracking light exposure and telling you when to turn out the lights. Beanhunter locates coffee shops according to brewing equipment and the brands of beans they carry. Using a phone camera, Word Lens translates printed text from Russian, Portuguese, German, Italian, French and Spanish into English, to make reading menus and street signs a snap. Uber, now operating in 200 cities, lets you order a taxi or a car, then bills your credit card automatically – no currency required. And you can find various exchange rates at a glance with Denominations – Paige Magarrey 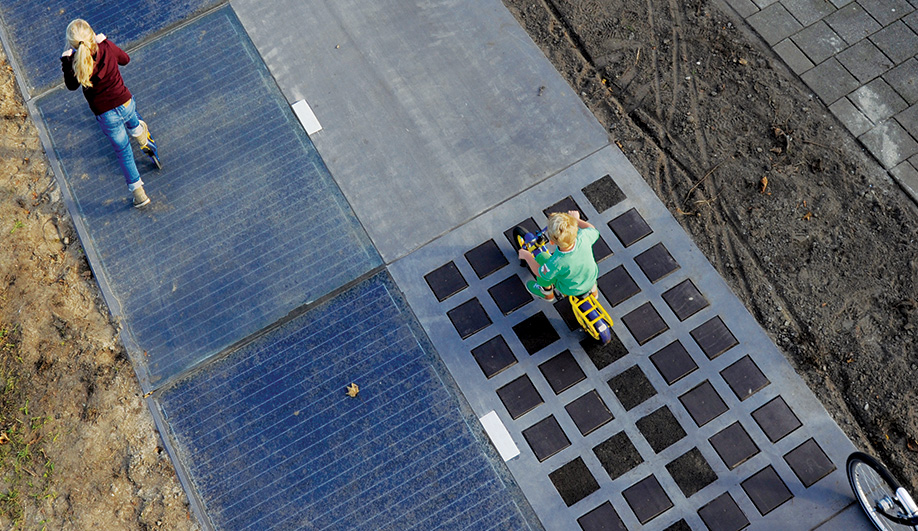 10 Solar-powered roadways
Various start-ups worldwide are angling to corner the market on energy harvesting systems for roads by replacing pavement with photovoltaic panels. One U.S. company, Solar Roadways, has garnered extensive media attention with promising prototypes, including one at a parking lot in Idaho (Popular Science listed the company in its 2014 Best of What’s New annual). But the small Dutch town of Krommenie lays claim to being the first to install an operable power-generating roadway. Developed by a consortium in the Netherlands, the 100-metre-long SolaRoad consists of solar cells sandwiched between sheets of glass and mounted in concrete modules. The top layer of glass incorporates a skid-­resistant coating, and is tempered to withstand the weight of service vehicles. While the pilot program now generates enough electricity to keep just two or three households running, more roads like it could ultimately power electric vehicles, with the converted energy used to fund further construction costs. – Michael Harris

SHARE
Twitter, Facebook, LinkedIn, Pinterest, Email
TAGS
Technology, Transportation,
AZURE is an independent magazine working to bring you the best in design, architecture and interiors. We rely on advertising revenue to support the creative content on our site. Please consider whitelisting our site in your settings, or pausing your adblocker while stopping by.