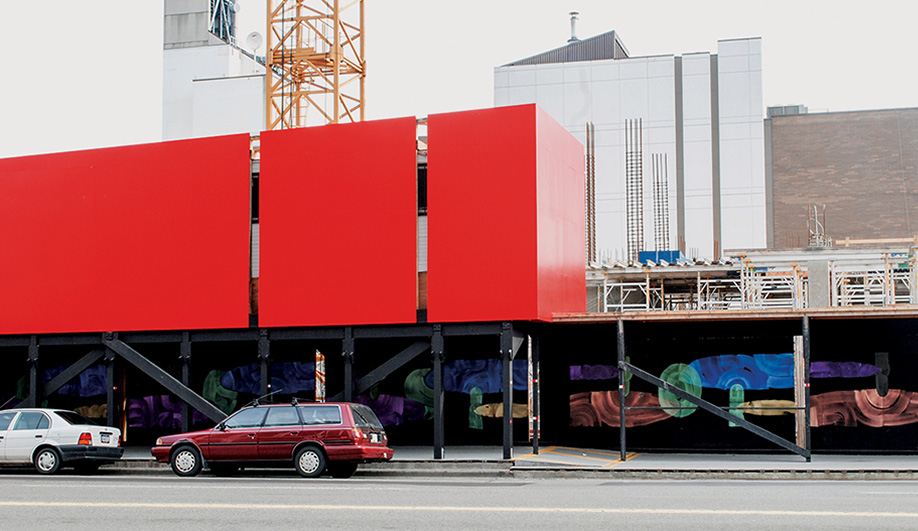 When construction hoarding goes up in a high-traffic area, it can be a worse eyesore than an open construction pit. So designer Franc D’Ambrosio came up with an enclosure that is as useful to foremen as it is a delight for passersby. His firm’s Big Red Box arranged all of the outbuildings on a British Columbia construction site (trailers, portable toilets and other necessities) behind a bold red wall. Slots carved into the wall give workers access to fresh air and a view to the street. Artist Bill Porteous was also commissioned to paint a mural for the construction fence. ­fdarc.ca

Easily the world’s coolest street festival tent, MirrorMirror consists of just three simple elements: a gabled, hinged roof covered in stretched reflective Mylar foil; foldable steel tripod frames; and concrete block anchors – all deployed in six minutes or less. After it was chosen as the winning entry in a competition by New York’s Storefront for Art and Architecture, along with the New Museum, the portable pop-up venue enjoyed its first moment in the sun during 2013’s Ideas City, where it reflected the action on the sidewalk, boosting the energy of the Bowery event. ­davidsonrafailidis.­net