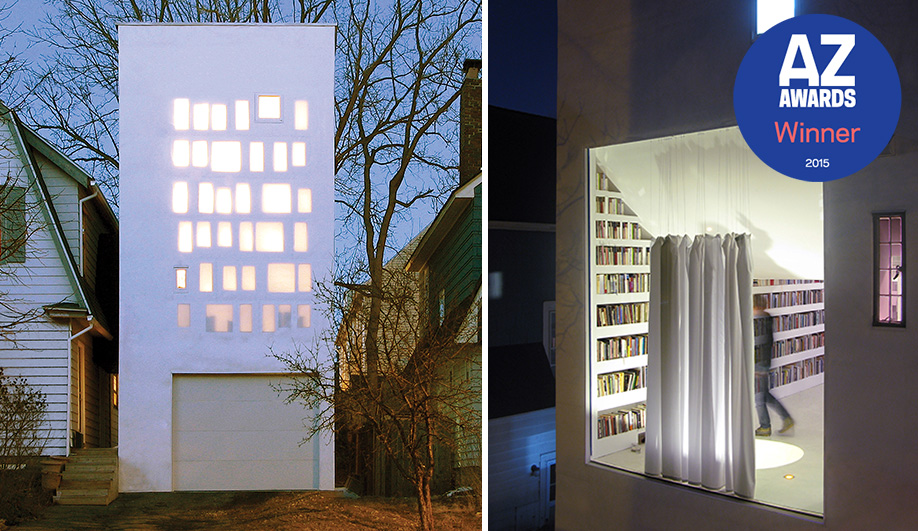 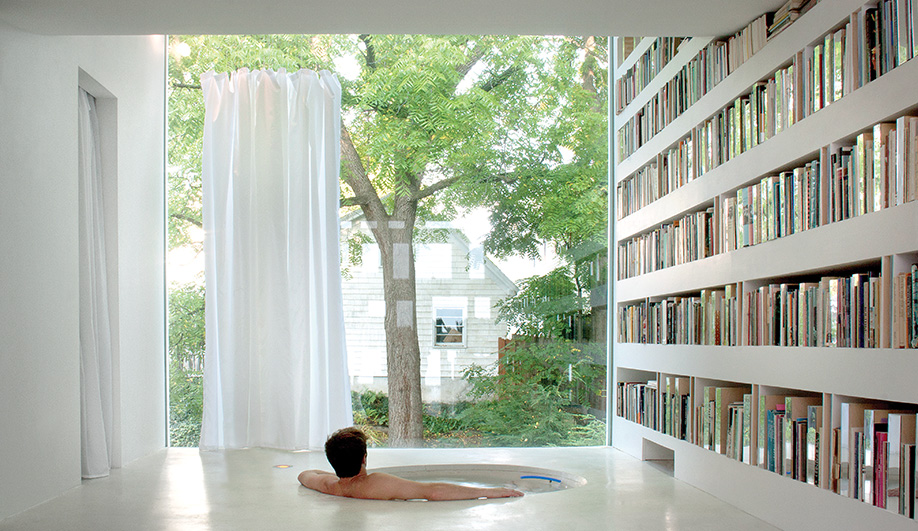 Non-conformist is one way to describe Haffenden House in Syracuse, New York – a beautiful misfit in a neighbourhood defined by traditional clapboard and shingled houses. Designed by PARA Project, it is a playful and gutsy solution to a relatively conservative brief: to design a self-contained writing studio and library extension for two poets.

Rather than replicate the original barn-roofed house, the New York firm, led by principal Jon Lott, devised a three-storey cuboid structure to sit alongside it, with a facade animated by rows of tiny windows, each one slightly askew. The 105-square-metre addition both contrasts and complements the main house while adding a vivid new dimension to the streetscape. Though the two sides connect via the second floor, the extension is otherwise a separate building, with a garage and a breezeway on the main level.

The exterior walls are swathed in a membrane of translucent silicon-impregnated fabric, which provides both privacy and light control. Inside, the malleable textile is repurposed as a curtain to cover a larger back window. This residential application of a material more often used in stadium roofing transforms the exterior by softening the building’s crisp lines.

As extensions go, Haffenden House is radical. It delivers on the desired library and writing studio, but it also embodies a profound sense of freedom and luxury. The white floors in the third-level reading room invite lounging anywhere, while a ceiling in gold leaf and a mirrored finish on the bookshelves bounce light throughout the space. On the second storey, a sunken tub at one end of the library takes reading in the bath to a new level. The deep concrete soaker doesn’t interfere with the blank-canvas aesthetic of the space, which is purposefully devoid of furnishings and adornments. It gives the owners the getaway they were after, a place to clear their minds and think, right on their doorstep.

About the firm: Jon Lott established PARA Project in New York in 2005 as an architectural studio where collaboration and standing out from the norm are key. In a published interview about his practice a few years ago, he said, “Unless you make it strange, it’s taken for granted.” Team: Jon Lott with Paul Knepley, Minh Lam, Hilary Pinnington and Cristina Webb

What the jury said: “The discipline of Haffenden House lies in its simplicity. The detailing is critical, because there’s nothing but the detailing to create the space. I can certainly imagine the luxury of reading and soaking in that tub.” – Janet Rosenberg