The Making of the 2016 AZ Awards Trophy and Installation
The 2016 AZ Awards gala featured a few innovations all its own. Working with new techniques, Toronto design studio Castor created a stunning light installation and Vancouver designer Omer Arbel devised the wonderful trophies. 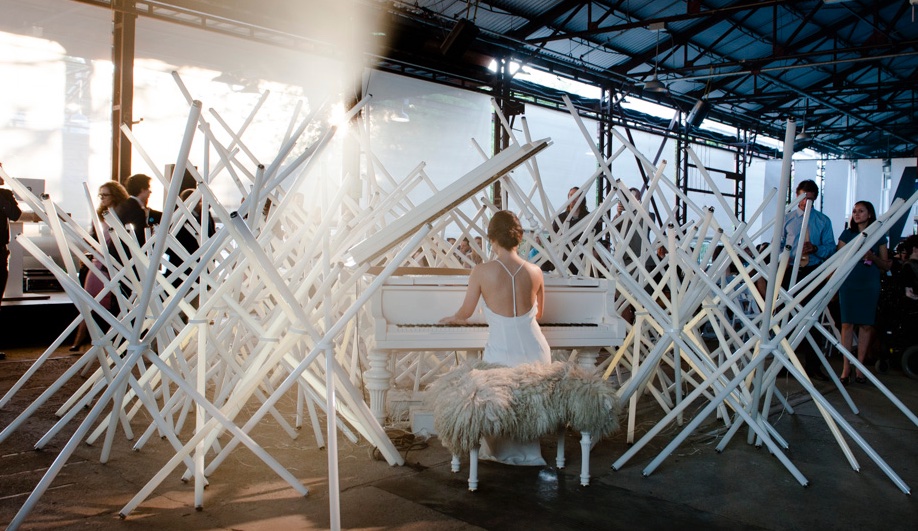 The winners of the sixth annual AZ Awards not only received recognition for their groundbreaking projects and products – they also took home a trophy designed and made by Omer Arbel. A halo of bubbles surround the polished pewter letters A and Z, created in a completely novel process.

The Vancouver designer approaches each project according to the general philosophy that guides his studio: invent fabrication processes that yield new forms. Rather than imagining the final form, that is, the studio imagines an experimental method that results in a new product. This is how it has created the numbered lighting series of its world-renowned Bocci brand, from the folded porcelain shapes of 21 to the ethereal, fabric-textured glass clouds of 73. 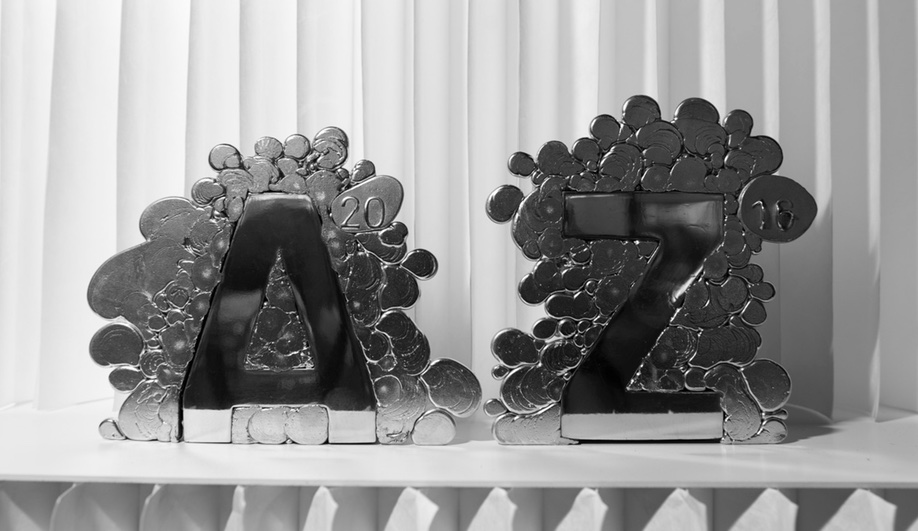 For the AZ trophies, Arbel sought to stick to the iconography of the brand, keeping the two letters – the A and the Z – distinct. These were cast in pewter, in two-inch-deep moulds that were placed on an L-shaped aluminum tray. The tray was suspended in an ice water bath, and then Arbel took a torch to them, melting the backs of the letters. Rivulets of pewter – those lovely foam-like bubbles – flowed past the edge of the letters and over the aluminum tray. They instantly congealed into a droplet formation on the top and sides; the L shape of the tray prevented beads from building on the bottom, allowing the letters to stand on their bottom edges. 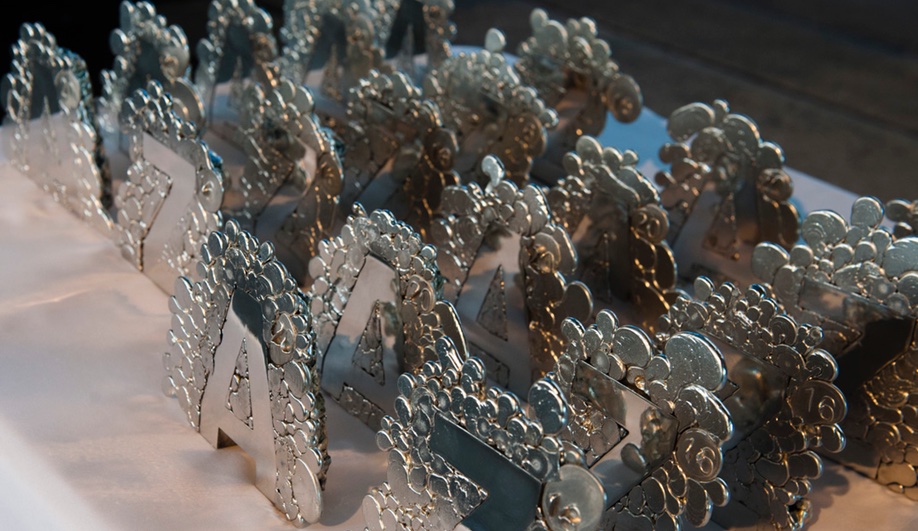 The faces of the letters were polished before the melting occurred – their hard edges revealing the meniscus of the liquid to solid process – so that the polished surfaces could be complemented by the bubbles’ coarseness. The year 2016 was also cast into a cavity in the aluminum tray, the pewter bubbles incorporating it. A work of art, the AZ trophy honoured 18 winners among the 66 finalists. 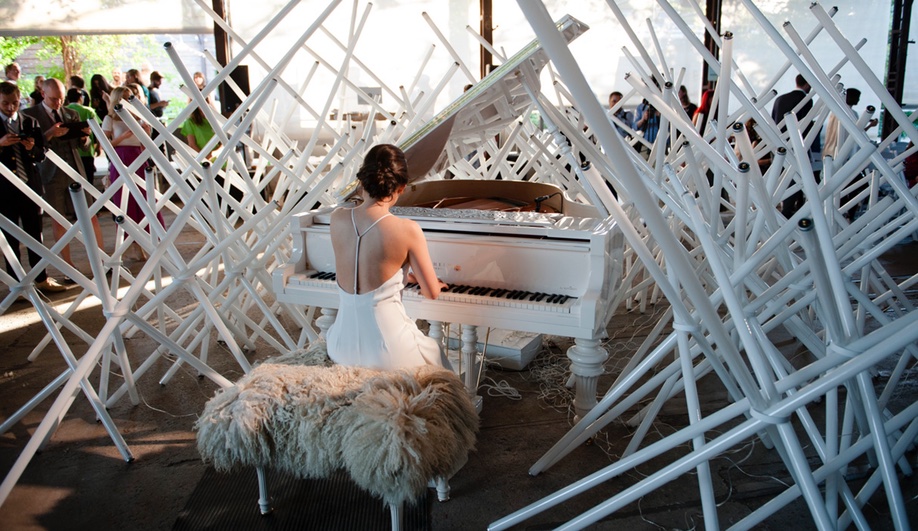 An interactive light installation by Castor enjoyed the spotlight before and after the awards ceremony. Pianist Amy Seulky Lee took to a Schimmel, provided by Robert Lowrey Piano Experts, and delighted the crowds with Chopin. As she struck each note, the fluorescent tube matrix surrounding the piano pulsated with illumination. 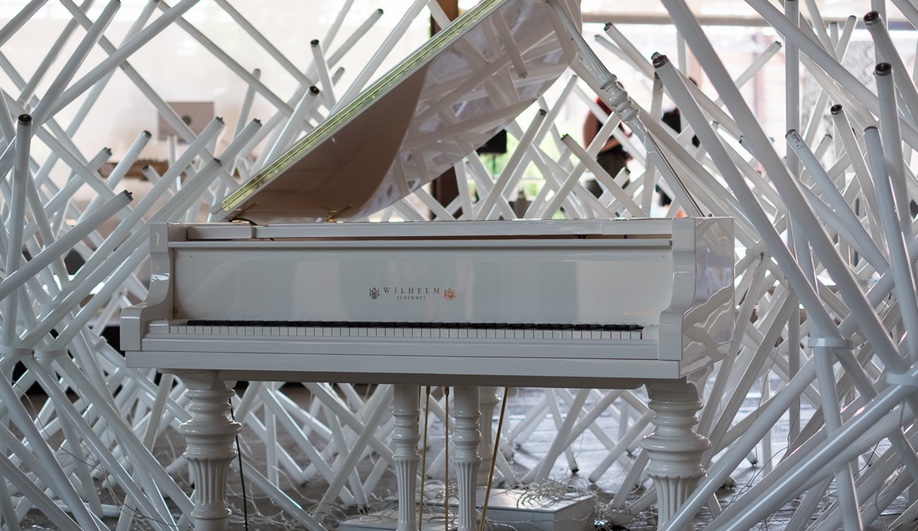 The Liberace x Flavin installation is an exploration of electrical magnetic fields, which excite the gases in the fluorescent tubes. An RGB sound controller was connected to both the installation – made up of about 250 tubes, between six and 10 feet tall, held together in clusters by rings – and the piano. The controller adjusted the brightness of each tube with every note that was played.

The artwork shows Castor doing what it does best – experimenting with new lighting technologies and techniques, and finding new ways of working with fluorescent tubes.