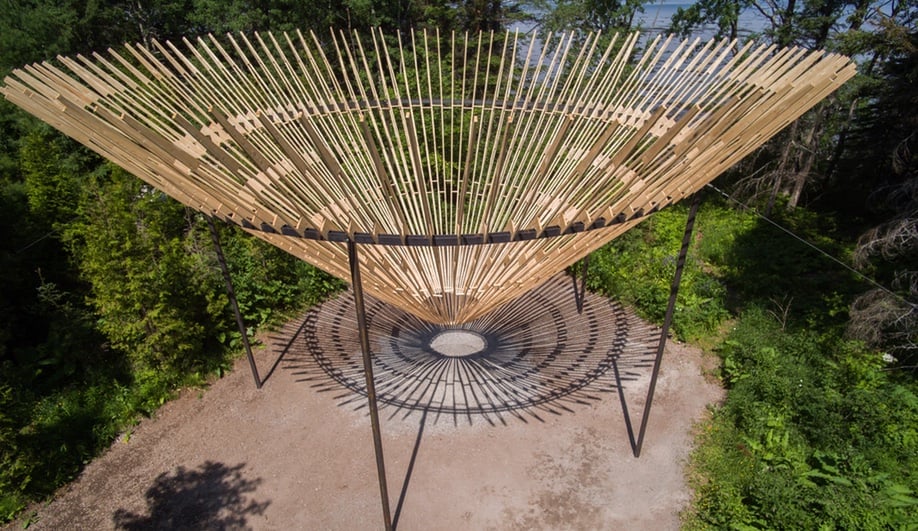 More than 200 projects from 31 countries were submitted for consideration for the annual International Garden Festival in Grand-Métis, Quebec, the leading contemporary garden festival in North America. The festival’s jury selected five pavilions for the 2016 edition, by designers and architects from Canada, the United States, France and Switzerland.

The winning five installations, detailed below, join more than 20 other temporary, interactive pavilions on display at Grand-Métis’ Redford Gardens. The 2016 International Garden Festival runs until October 2. 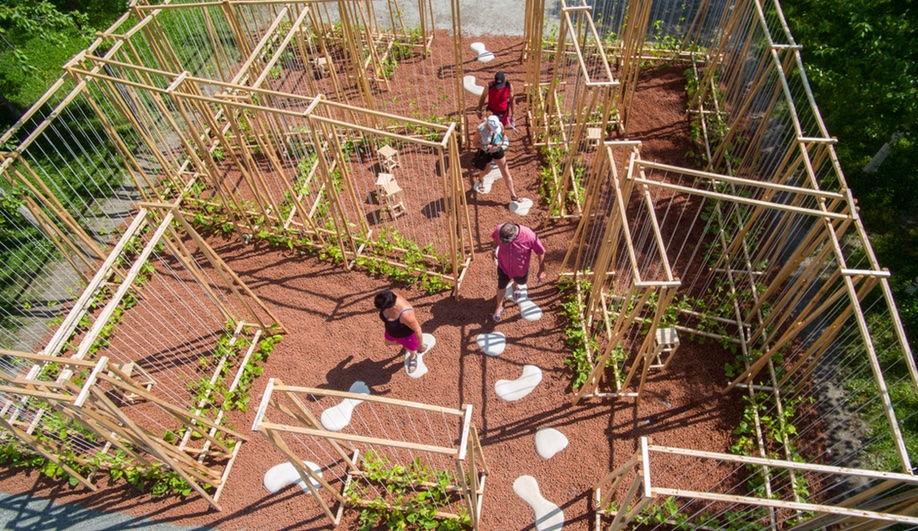 1 La Maison de Jacques
Inspired by the fairytale Jack and the Beanstalk, La Maison de Jacques – or, Jack’s House – is a pavilion in bloom. Stepping stones carry visitors over clay bead ground cover and through a grove of wood trellises, enveloped by rows of sprawling beanstalks. The arbors divide the space into modules, each serving as its own private garden. The installation was conceived by Romy Brosseau, Rosemarie Faille-Faubert and Émilie Gagné-Loranger, all graduates from the master’s program in architecture at the Université Laval in Québec City. 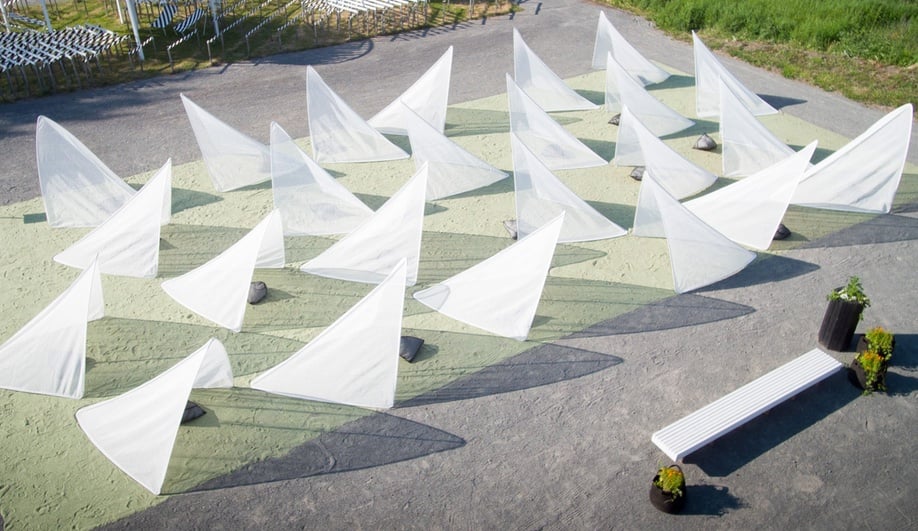 2 TiiLT
Part shelter, part sculpture, part landscape, TiiLT is an interactive environment that provides Redford Garden visitors a place to play or pause. Manitoba-based design team SRCW (comprised of architect Sean Radford and designer Chris Wiebe) installed a series of breezy, white-skinned tents at alternating angles, forming a sort of labyrinth that guests can hide within. Each tent can be flipped between two positions, to bask in sunlight or to be shaded from it, shifting the walkways and vistas. Seen from above, the assembly evokes an image of mountain peaks. 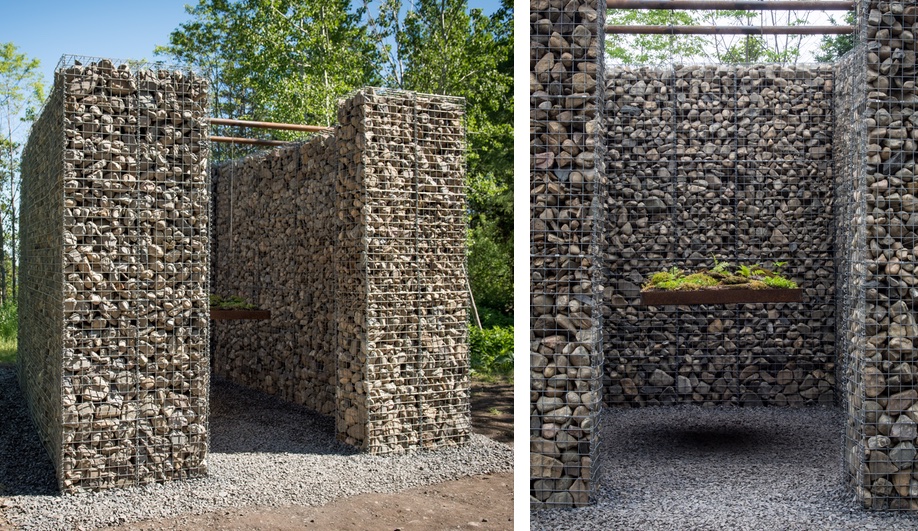 3 Le Caveau
Swiss architect Christian Poules devised an earthy room for reflection and dreaming for the 2016 International Garden Festival. Steel gabions filled with grey stones form the three walls and doorway of Le Caveau, creating a structure that feels well-suited to its natural surroundings. Inside, a platform supporting a moss and fern garden seems to levitate in the centre of the open-roofed room.

4 Cyclops
From afar, Cyclops emerges from the landscape as a timber frame for an alien spacecraft. A steel ring beam, raised off the ground, supports 100 eight-metre-long timber planks that form an inverted cone. At the cone’s centre, a circular opening serves as a peephole, framing the landscape and sky for users who step inside to take a look. Phoenix-based architect Craig Chapple imagines the installation as way to blend the man-made with the organic and natural. 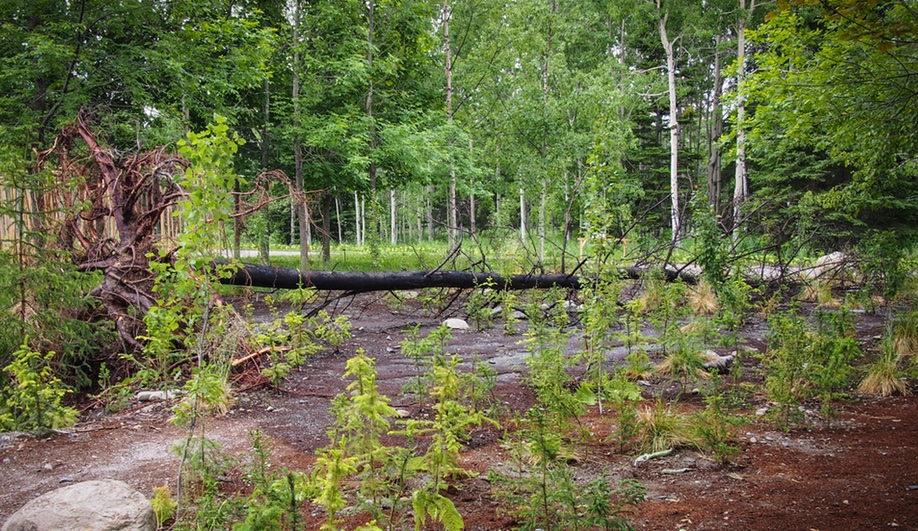 5 Carbone
Carbone makes a confusing first impression. It seems to be nothing more than a tree that has fallen within Redford Gardens, distinct only because the majority of the garden’s grounds are meticulously maintained. The downed tree is the centrepiece of the installation by Coache Lacaille Paysagistes, a French landscape architecture and design team.

The group removed the tree, which had already been uprooted by a storm, off-site and transported it to Redford, where they placed it on its side. Branches, lightly burned by the team, are found near the trunk, along with newly planted tree seedlings. The installation is meant to evoke a comparison between the cycle of production and nature’s own carbon cycle. Nature is altered and harvested. The forest is regenerated, and sowed again. A young tree grows where an older one once fell.