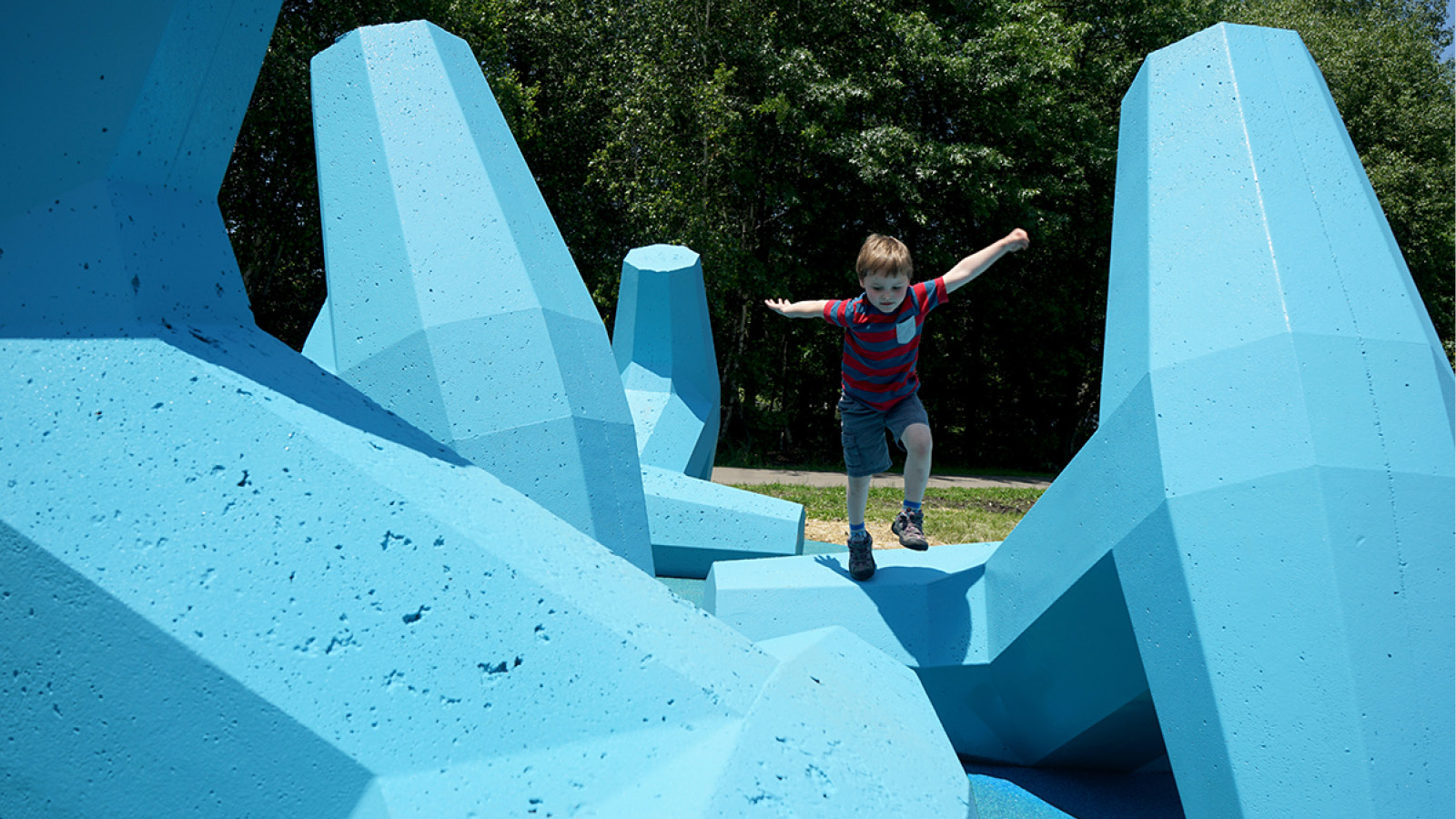 3 Imaginative Installations that Tackle the Art of Play

Buffalo and Toronto-based Coryn Kempster and Julia Jamrozik build bold playscapes as social infrastructure for the next generation.

Playgrounds, parks and similar outdoor locales are often the first social spaces we encounter – where interpersonal bonds are developed, identities are formed and entire imaginary worlds are built. It should come as no surprise, then, that architects have long been as concerned with designing public places for children as for adults. More infrequently, however, are studios that become near experts in the field.

This particularly rich territory has fascinated Coryn Kempster and Julia Jamrozik, who explore the “impact that they can have on the individuals and the communities they serve.” And they have amassed a significant portfolio of playscapes for children and adults alike – even going so far as to research the effects of growing up in modernist spaces.

At first glance, their recent vibrant works are seemingly devoid of traditional equipment: no slides, teeter-totters or monkey-bars. Instead of prescribing how to play, the pair deploy architectural elements borrowed from large-scale infrastructure projects to create landscapes that are “open-ended in the way that they are perceived and used.” From climbing bars in Seoul, Korea, to beachside hangouts in Jamestown, NY, we take a look at three visions of contemporary childhood from the Toronto- and Buffalo-based designers who never miss a chance to play. 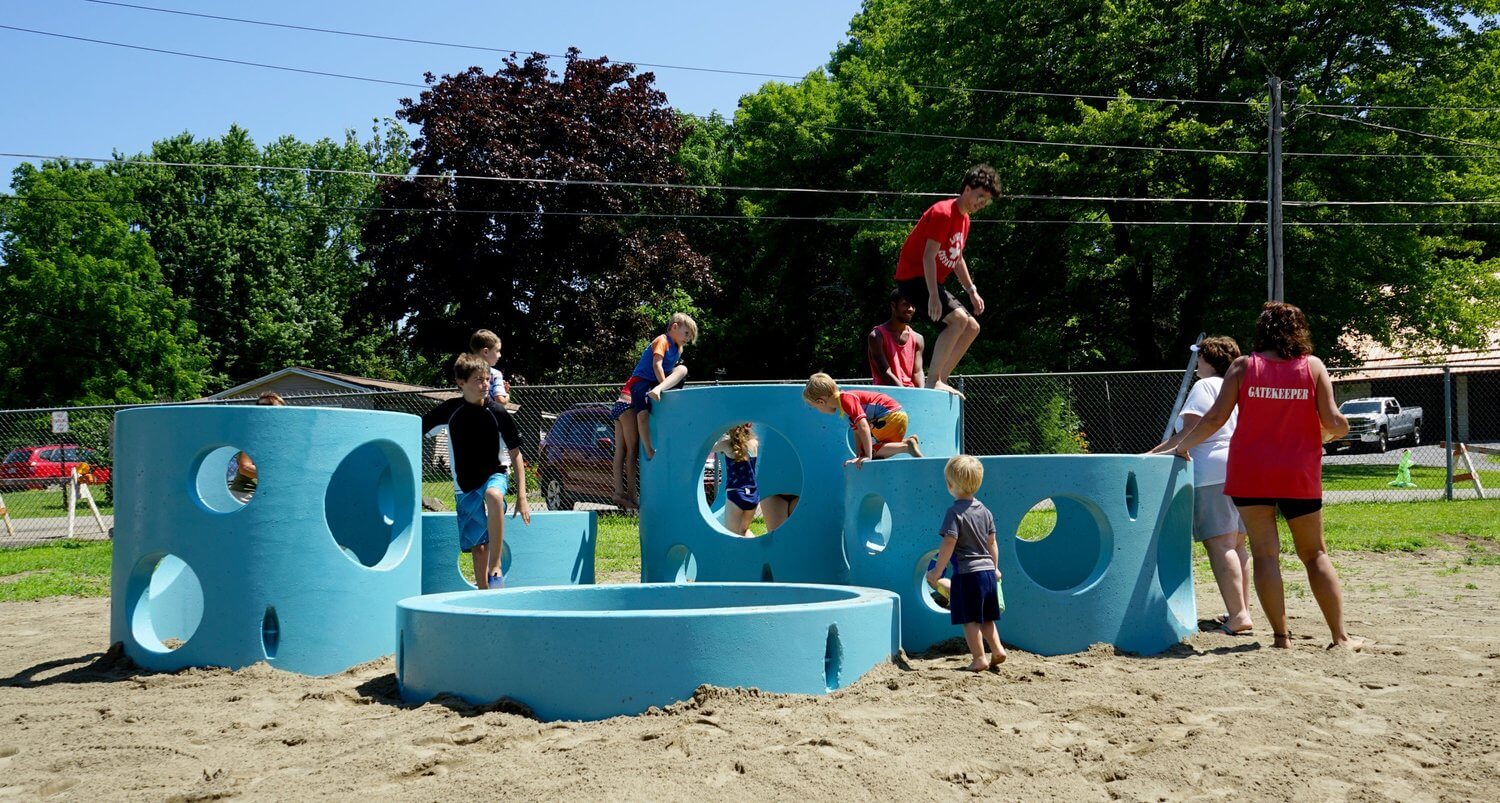 “There is no right or wrong way to use the installation,” explain Kempster and Jamrozik of Loopholes, a perforated set of structures they installed in Cassadaga, NY, in 2019. The beachside playground is comprised of five concrete cylinders (more commonly used for drainage pipes) of varying heights punctured with a series of apertures. Though simple in execution, the abstract ensemble is a place “to interpret and invent rather than use more prescriptive play equipment.” Together, the porous electric blue walls do double duty – framing interaction and exchange among children while providing functional ledges to climb on and relax against. 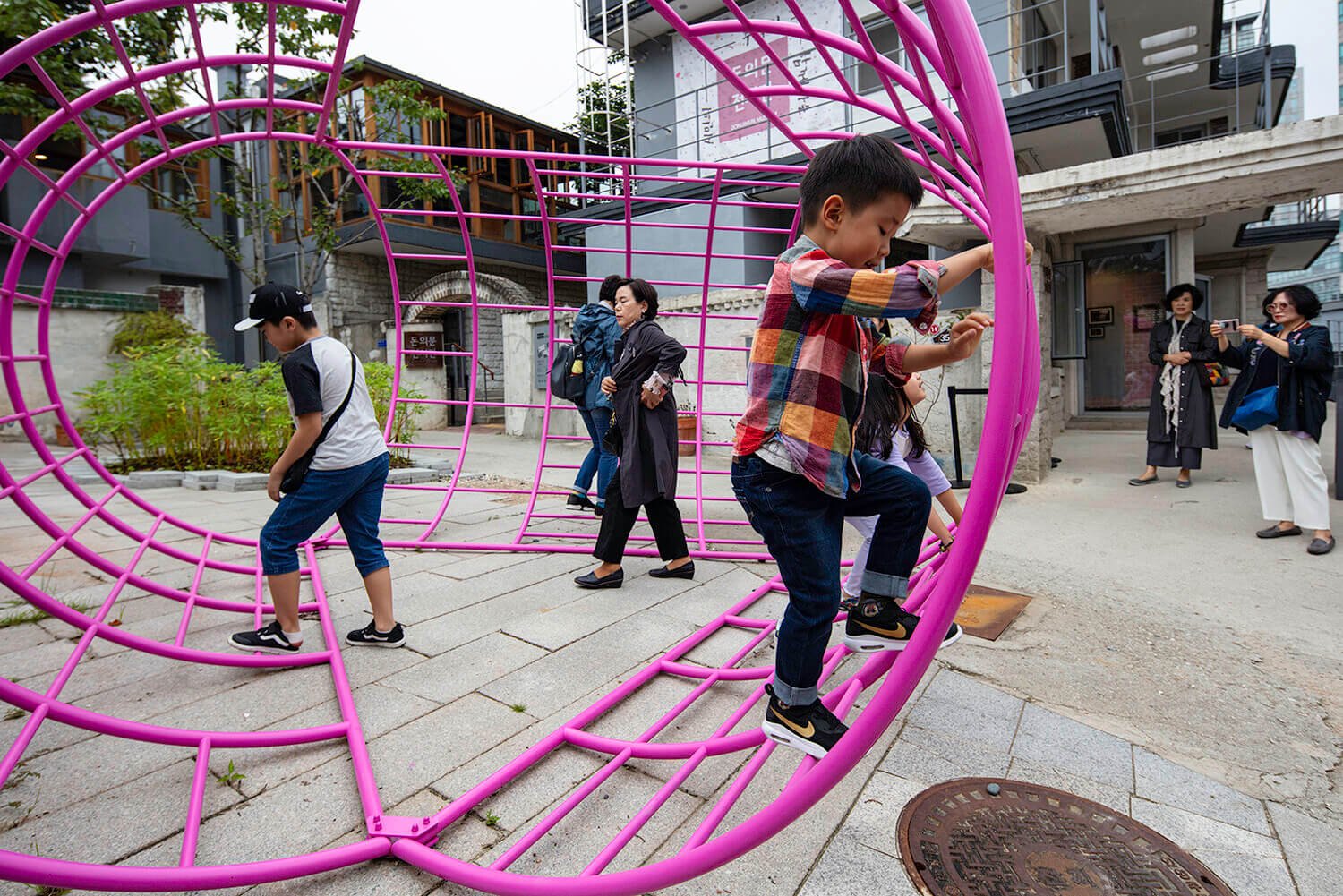 Installed as part of the Cities Exhibition in the 2019 Seoul Biennale of Architecture and Urbanism, the magenta playscape Aldo borrows its eponymous title from the Dutch architect Aldo van Eyck and his thoughtful design of over 700 playgrounds for post-WWII Amsterdam. The structure re-imagines van Eyck’s iconic domed climbing frame as three curving grids for hanging, lounging or whatever else may come to mind; tied together, they create a triangular form that offers a new kind of a “social infrastructure.” Noting a fondness for the pink hue “Hot Lips” adorning the installation, Jamrozik explains: “Colour is very important in our work. Strong colours have the ability to attract and to create interest and associations (both cultural and personal).” 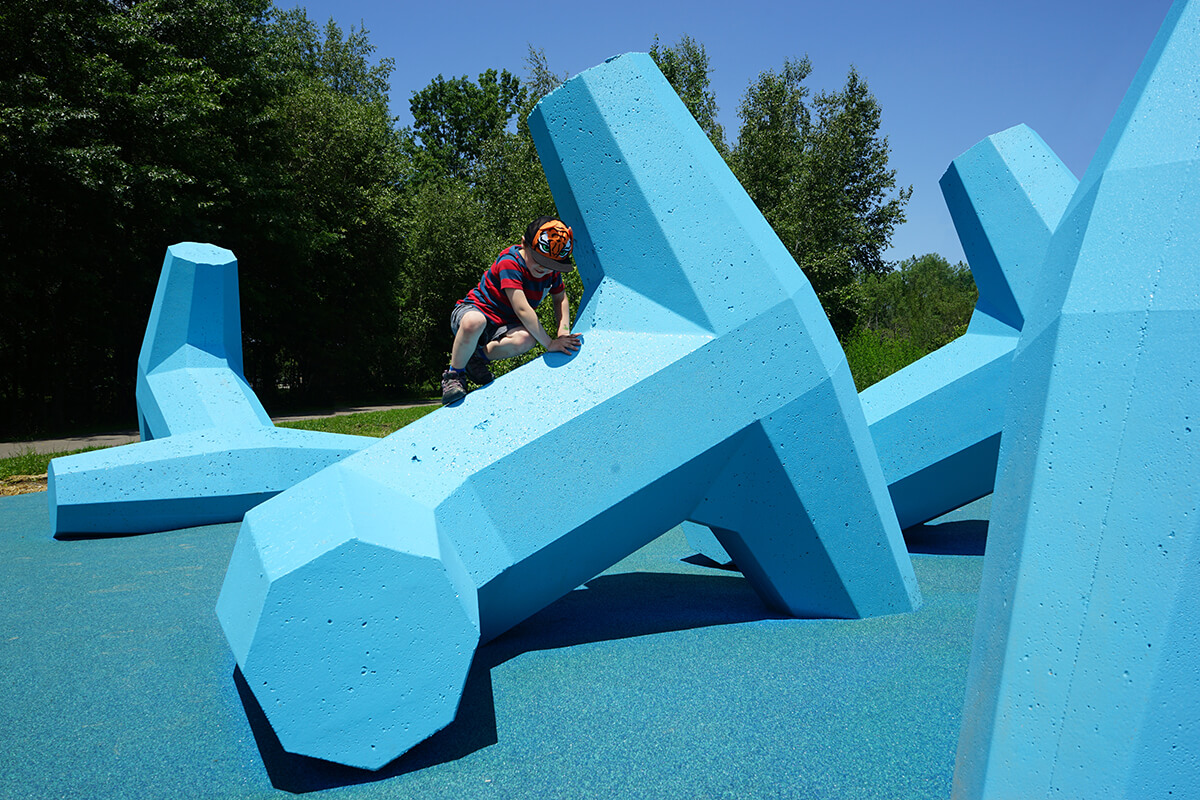 While pre-cast concrete dolosse – used extensively in coastal engineering as interlocked barriers to protect shorelines – may not seem like the first choice for playground equipment, these sculptural elements were the ideal building blocks for an experiential landscape in Jamestown, NY. Four of these seven-ton structures were reclaimed from a nearby project on Lake Erie, painted bright cyan and carefully arranged atop an equally colourful EPM rubber surface. “Typical equipment is often targeted at particular age groups, limiting older children and adults from feeling like they can be part of the play,” Jamrozik says. With unexpected or more abstract playspaces, “some of these barriers disappear.” In Breakwater, the result is an unconventional assembly – mixing scales and generations – that stimulates imaginations and encourages almost endless forms of exploration.

Buffalo and Toronto-based Coryn Kempster and Julia Jamrozik build bold playscapes as social infrastructure for the next generation.