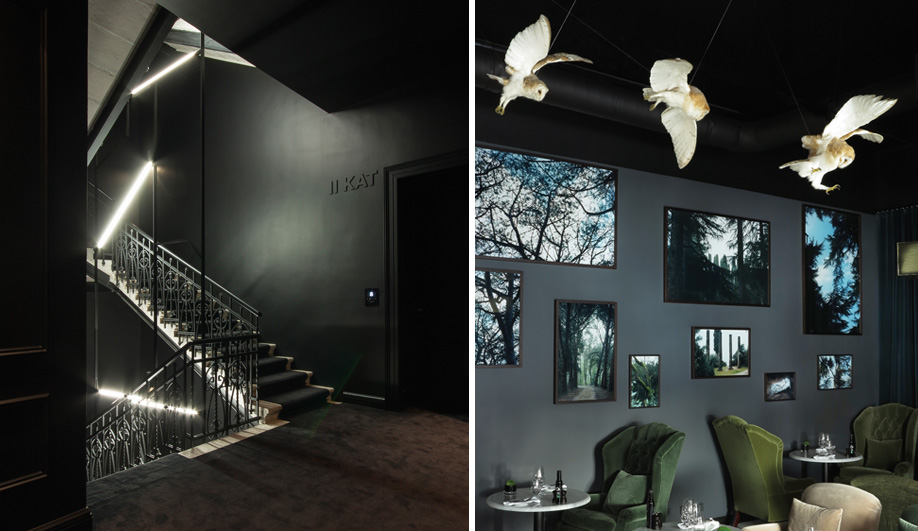 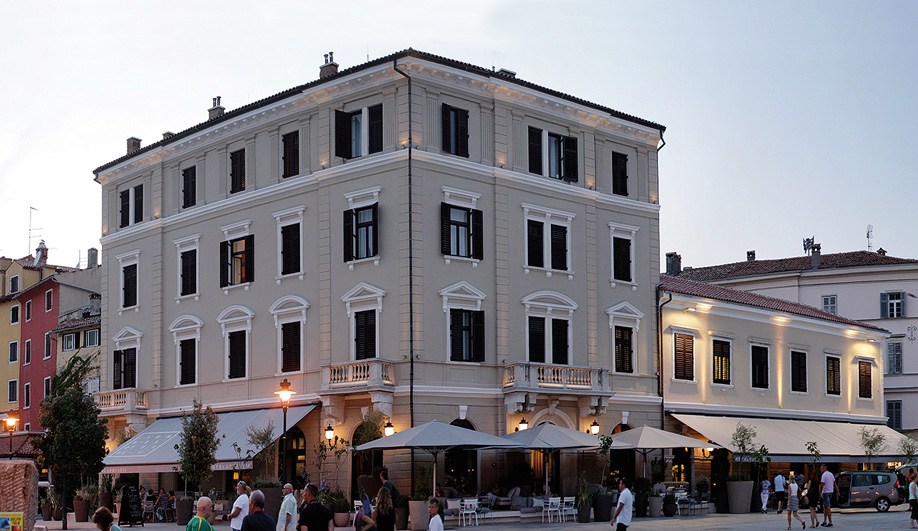 The heritage-designated exterior of the 18-suite hotel has not changed since it was built in 1913. Photo by Domagoj Blazevic. 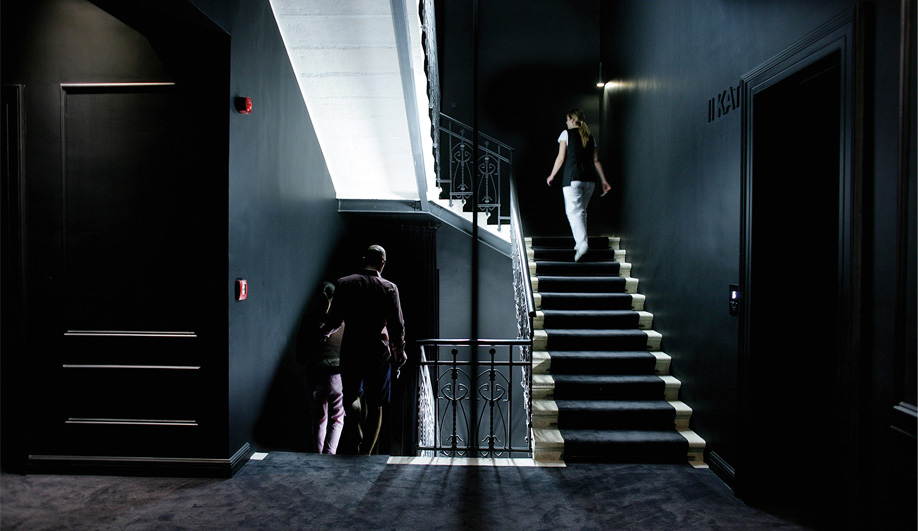 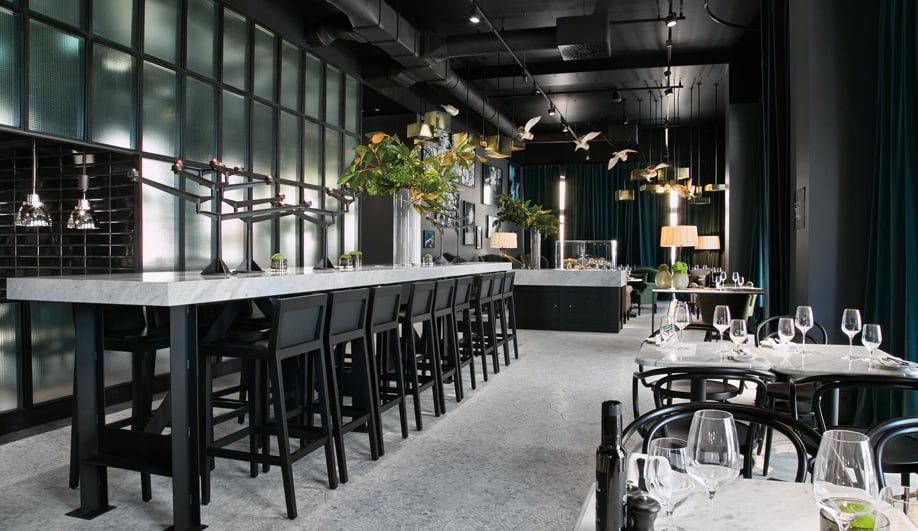 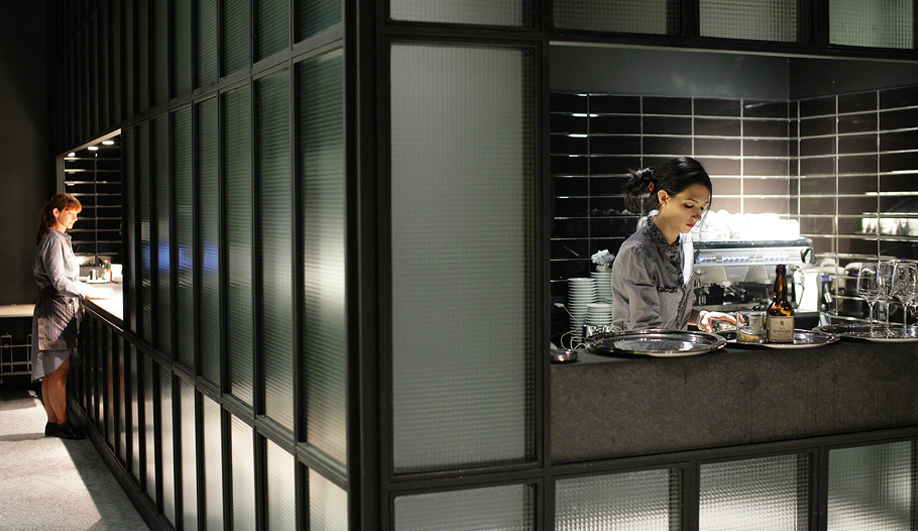 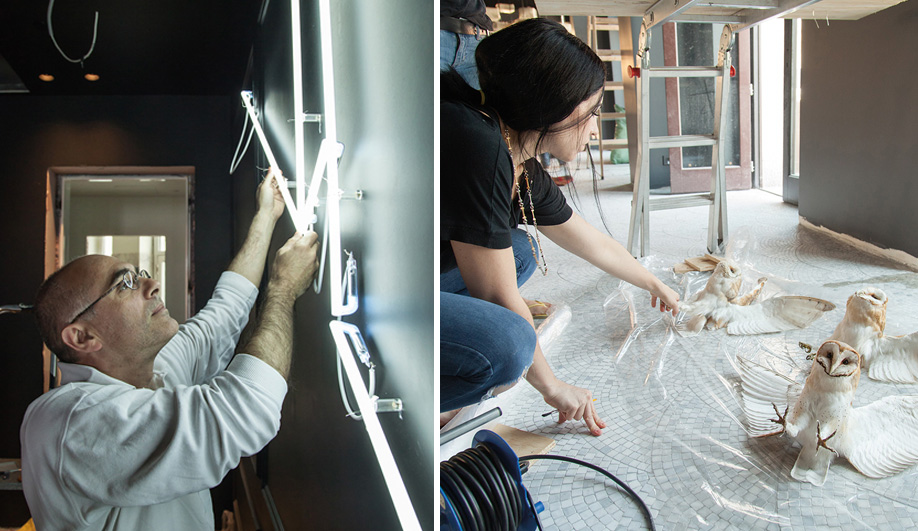 Left: Milan artist Massimo Uberti installs his neon pieces in one of the darkened hallways. Right: Jasmina Cibic, one of the artists commissioned to create works of art for the hotel, suspended six taxidermy owls in the brasserie. Photos by Ognjen Maravic. 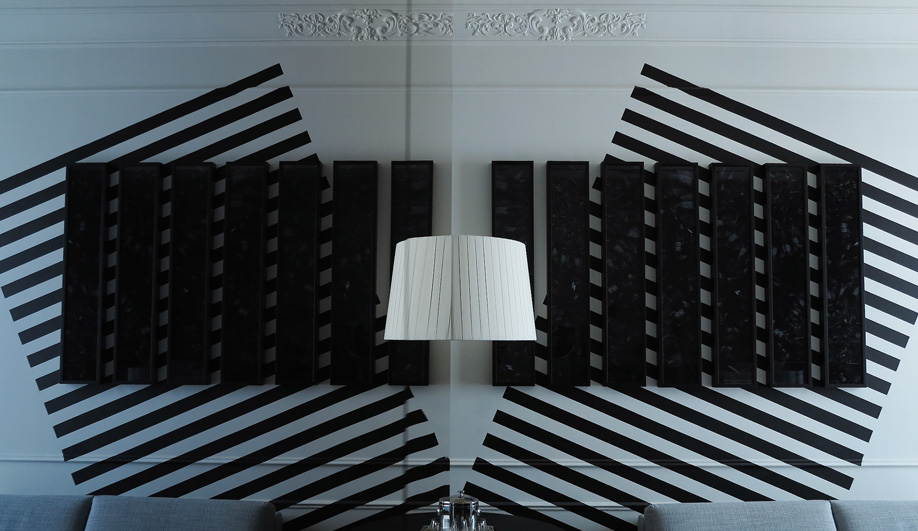 Much of the art was installed directly on the walls, and has become a part of the hotel. Photo by SofijaSilvia. 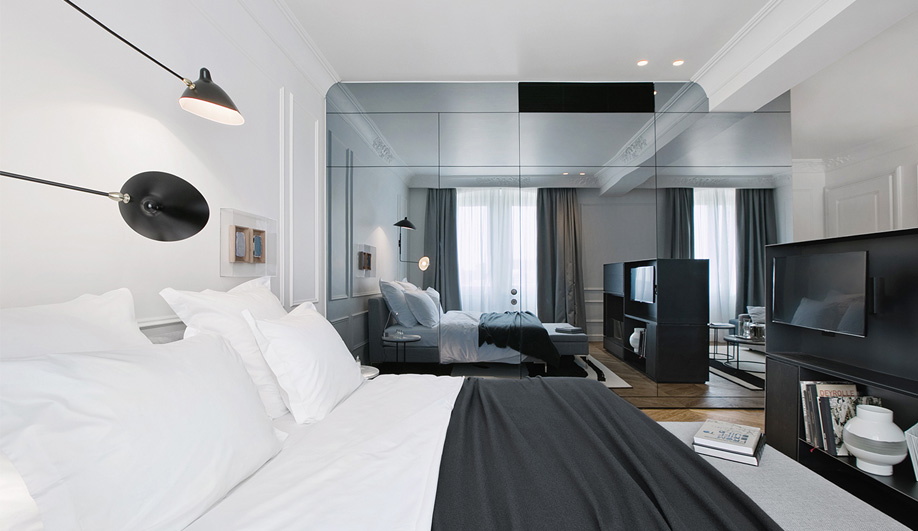 In the suites, mirrored walls tinted grey-blue conceal a door that leads to an en suite bathroom. Photo by Dusko Vlaovic. 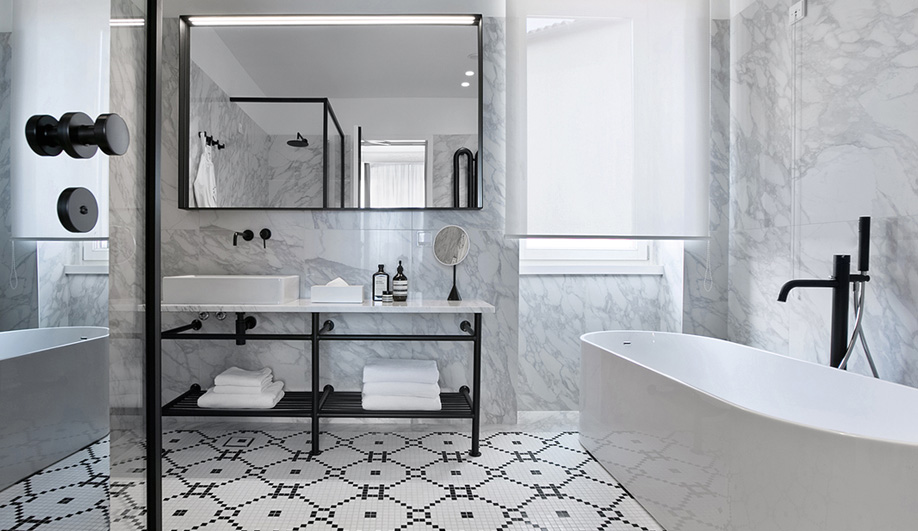 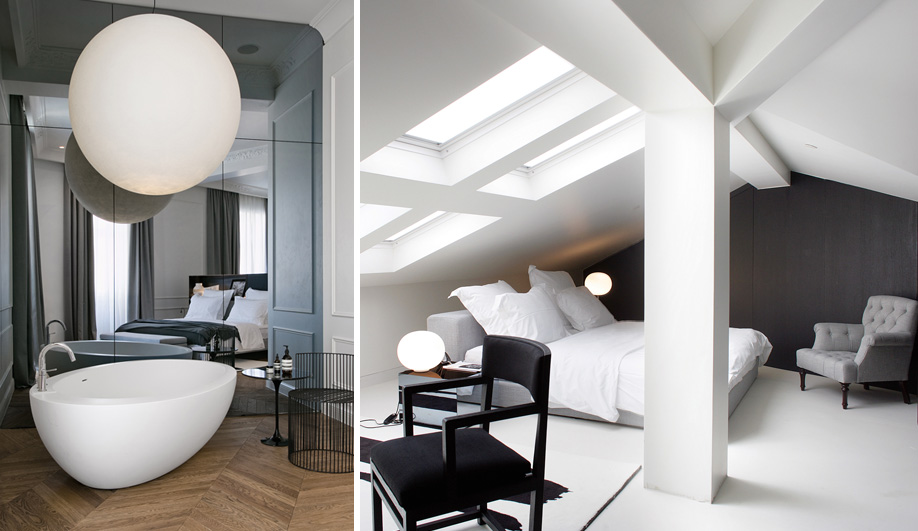 Left: A Luna 4 lamp, by In-­es.­artdesign, hangs above an oval tub by Moma Design. Chair by Antonino Sciortino. Photo by Dusko Vlaovic.nRight: Many of the suites have unusual plans, as they conform to the building’s historic exterior. Photo by Domagoj Blazevic. 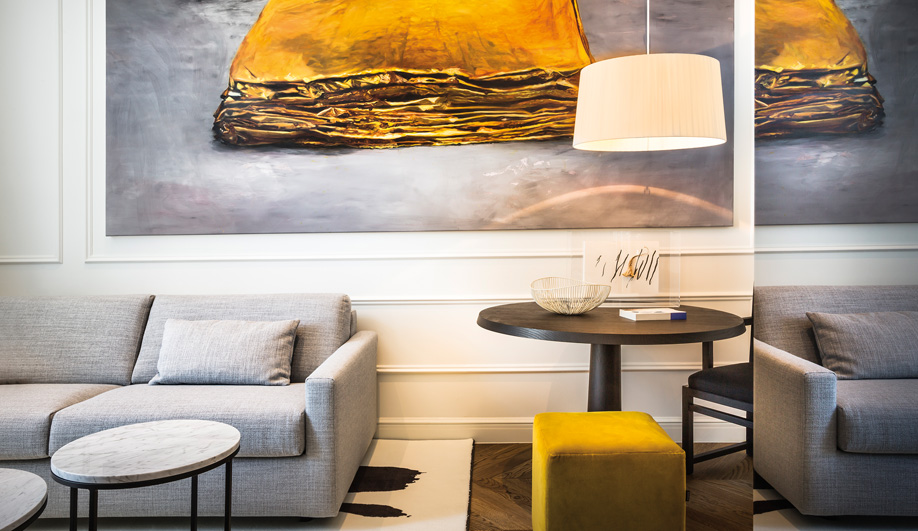 Most of the furnish­ings were custom made. Painting by local artist Zlatan Vehabović. 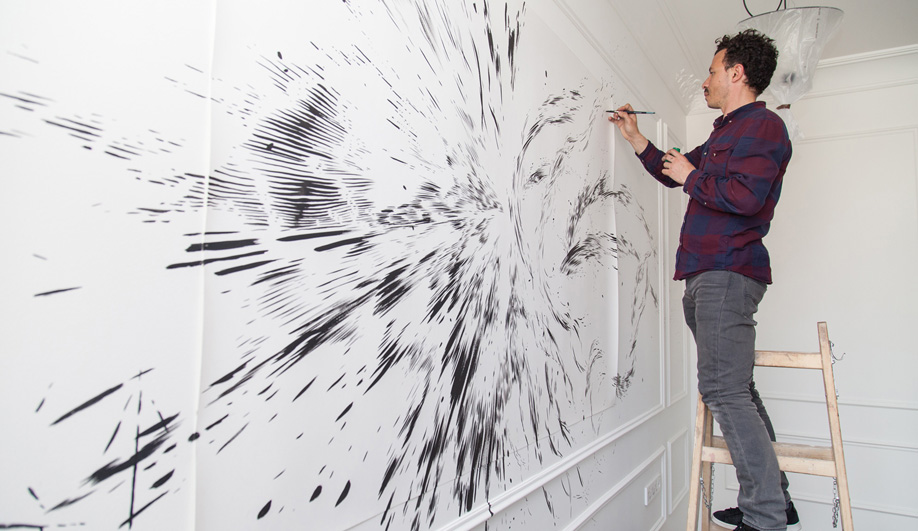 The overstuffed armchairs in the brasserie suggest that the recently re­opened Hotel Adriatic is all about the intimate atmosphere of a con­serv­ative sitting room. But once inside the 18-suite establishment – which sits at the corner of a downtown street in Rovinj, Croatia – the tones become muted and monochromic, in stark contrast to the colourful facades of the nearby square. While visitors sip Aperol Spritz at the bar, they can take in one of the many art installations found throughout the hotel. One in particular – an invisibly suspended row of six taxidermy owls frozen in mid-flight – is the work of Slovenian artist Jasmina Cibic. Clearly not the usual type of tourist novelty, the Adriatic is a carefully orchestrated experience, the vision of Zagreb firm 3LHD Architects.

The heritage-designated exterior of the 18-suite hotel has not changed since it was built in 1913. Photo by Domagoj Blazevic.

Located in the historical part of Rovinj, along the northern Adriatic Sea, the grand hotel faces onto a labyrinth of narrow streets dominated by the church of St. Euphemia. The hotel’s origins go back to 1913, though its role as a destination diminished over the years, as the construction of big resorts on the outskirts of town lured tourists away. A renovation launched in 2014 presented an opportunity to return the Adriatic to its former glory, as well as to revamp Rovinj’s downtown core.

It also gave 3LHD a chance to meld interior design with artistic interventions. The multidisciplinary firm decided to work with outside talents, including stylists and floral designers from Studio Franić Šekoranja, and curator Vanja Žanko, who was brought in to select original artworks, many of which were created for the hotel.

Because the exterior and the central staircase are heritage protected, 3LHD oversaw the meticulous restoration of both. No additions were made to the outside, though the oblique-angled interior was transformed into a newly functional plan. The public spaces, including the lobby and the surrounding patio, set the stage for an eclectic interplay among the historical layers, decorative flourishes and places where the art takes a starring role.

For the designers, the fun was in finding ways to express some of the industrial elements. Vents beneath the ceiling of the café and the brasserie, for instance, are left visible, and the bustling kitchen is partially hidden by screens of glass reinforced with wire mesh. These features stand in contrast to an assortment of regal-looking tufted sofas and armchairs upholstered in dark velvet, and to the heavy drapes on the windows. One sofa, covered in dark teal fabric, stretches for 8.4 metres along one wall in the brasserie. Tatjana Grozdanić, principal at the firm, says, “Our intention was to design an atmosphere that is marginally eccentric and somewhat decadent.”

Upstairs, all-black corridors set a dramatic stage for encounters with artworks, the neon and backlit pieces providing the only sources of illumination. The most prominent piece is Valentin Ruhry’s installation of fluorescent tubes that hangs in the well of the restored staircase. The darkened halls lead to mostly white rooms, a visual transition that feels a bit like stepping from one world to another. As Grozdanić explains, “The public spaces, the corridors and the rooms were designed as three separate units. We placed a great deal of importance on the gradation of light, without interrupting the unity of the space.”

In the suites, mirrored walls tinted grey-blue conceal a door that leads to an enu00a0suite bathroom. Photo by Dusko Vlaovic.

Works of art, featured in every room, range from large figurative paintings to small collages framed and mounted to the walls in grid formations. The collection is truly remarkable, a wonderful gift of contemporary culture for an old-world city endeavouring to bring tourism back to its core.