Four Ingenious Social and Sustainable Designs
When design is driven by need, beautiful things can happen. These four outstanding designs demonstrate that innovative ideas are priceless. 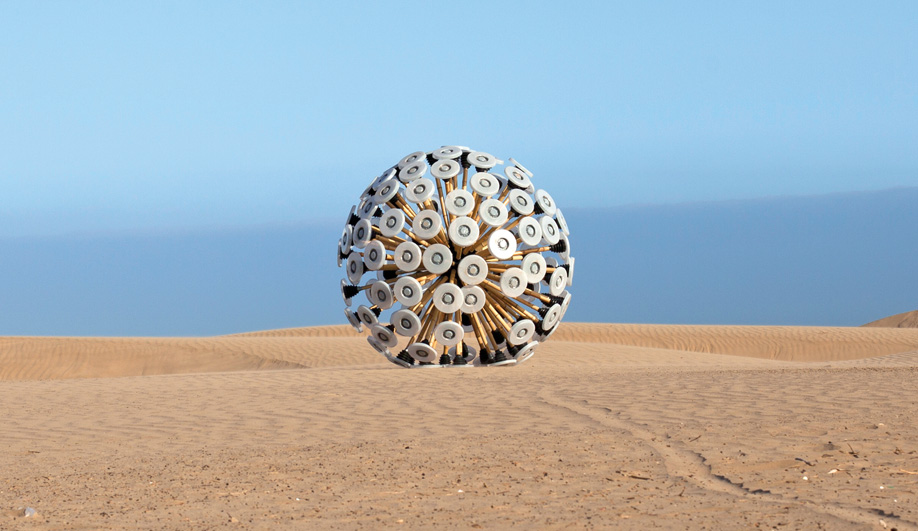 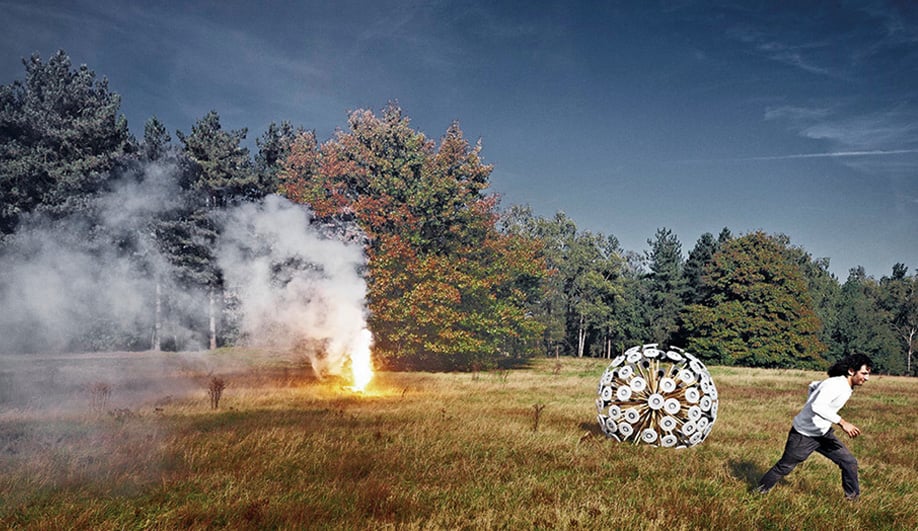 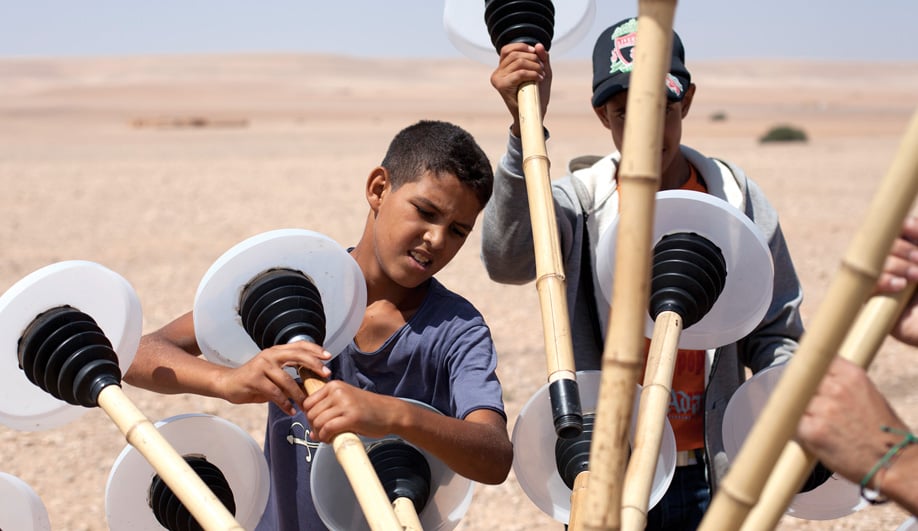 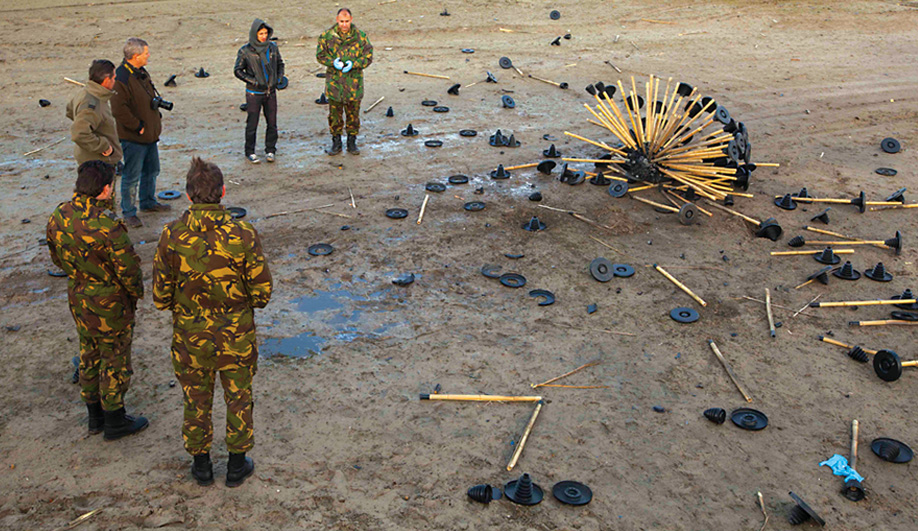 Necessity may be the mother of invention, but play is definitely the father. Massoud Hassani’s career was born of both. “I began designing when I was a kid,” explains the 20-year-old Afghani. “We used to make our own wind toys out of paper we found on the street.” He spent his childhood near Kabul, where his toys would scuttle over stretches of desert. These open spaces were perfect for playing in, except that they were covered in land mines, and anything that blew past safe perimeters was considered irretrievable. “There are about 10 million land mines in Afghanistan. It’s a big problem,” Hassani explains. Years later, as a student at Design Academy Eindhoven, he decided to revisit his childhood interests and think about alternatives for clearing mines.

His solution is a self-propelling structure light enough to blow in the wind but heavy enough to detonate any mine in its path. Called Mine Kafon (“mine explorer”), the device is made of protruding bamboo sticks affixed to a cast iron core; each radiating leg is capped with a plastic disc that helps contain the explosion when it hits a target. A GPS chip tracks its progress, and one Mine Kafon can absorb up to four explosions.

Its ingeniousness has attracted international media attention, along with expert opinions, which tend to determine its validity in being more poetic than perfect. (How, for instance, can you ensure that every mine is detonated if the route is random?) Nevertheless, with its simple construction and modest price of $50, Mine Kafon presents a far more affordable option than traditional safe removal methods, which cost anywhere between $300 and $1,000 per mine. 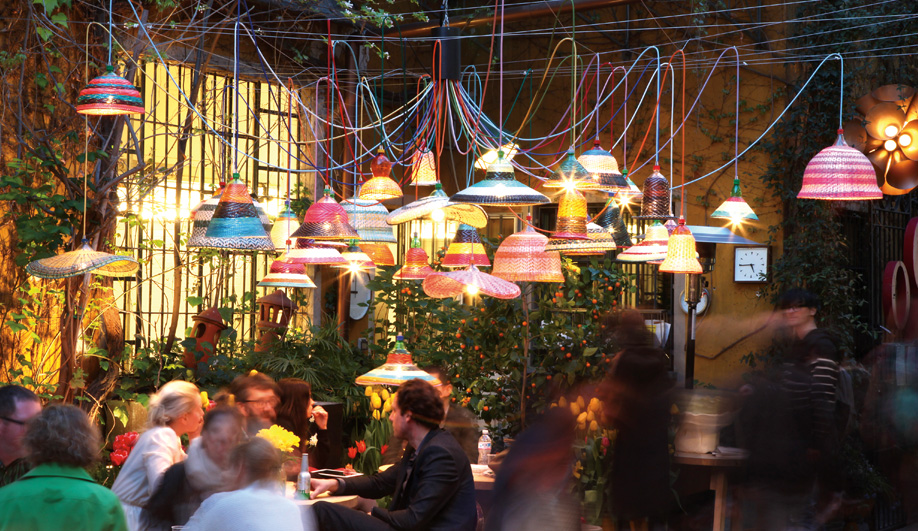 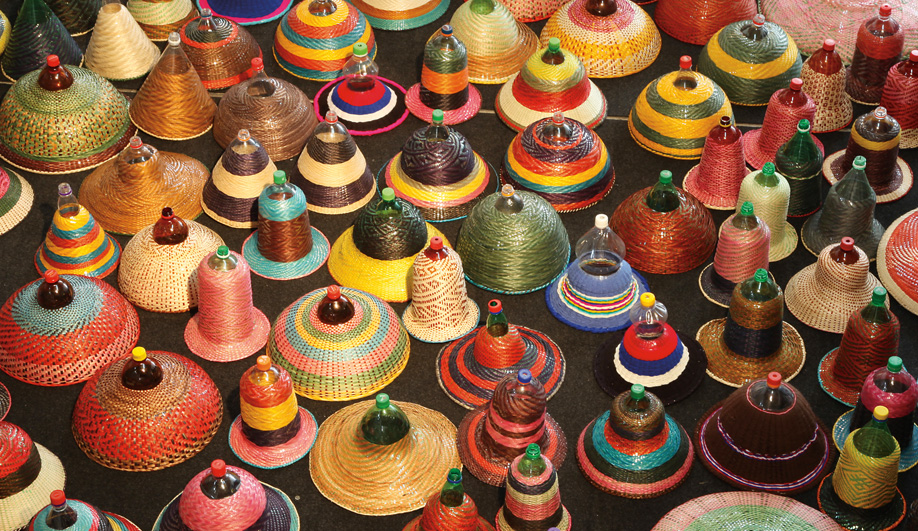 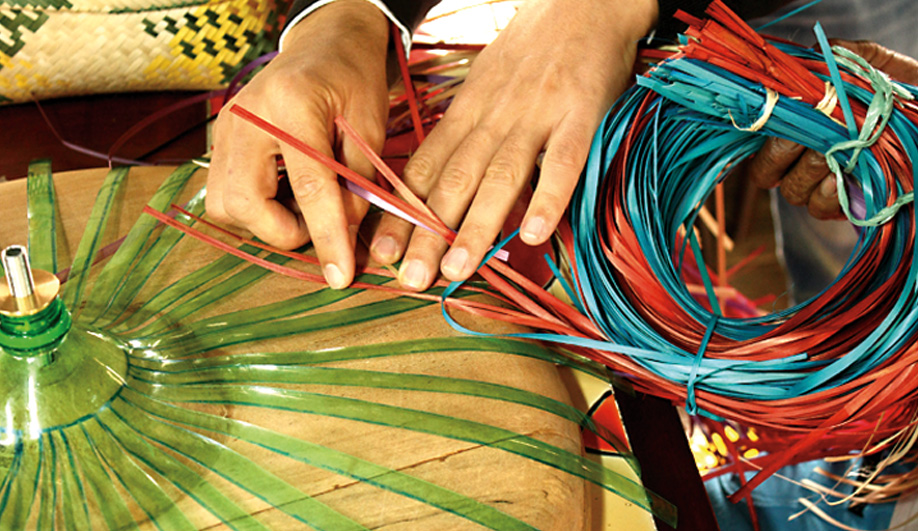 “Visually, it’s very powerful, like a party – full of colours and happiness,” enthuses Alvaro Catalán de Ocón while describing his latest project, PET Lamps, which transforms plastic water bottles into vibrant pendant lights, each handcrafted by Colombian textile artists. After several research trips to the region, the Spanish designer and his team spent time in Bogotá, establishing workshops for artisans displaced to cities due to guerilla warfare. The bottle’s neck acts as a joint to contain the electrical components, and the plastic body is cut into strips and used as a warp through which the designers weave traditional palm fibres. A creative type himself, Catalán de Ocón understands that artists are most engaged when given freedom for self-expression, so he sees his role as more catalyst than controller. With nine different models and endless colour combinations, each lamp is unique.

The project has already generated a viable financial base. Coca-Cola is on board as a sponsor, and venerable retailers such as Conran (London) and Merci (Paris) are selling the lamps as individual pendants or in clusters that form eye-catching umbrellas of colour. A dramatic installation of 35 lights was recently on display during Milan Design Week, hanging over tables at Spazio Rossana Orlandi’s outdoor café.

With pieces collected every two weeks, the initiative has given a growing number of families a secure income, and Catalán de Ocón hopes to introduce similar projects in Mexico and Chile. “We know we’re not going to solve the universal problem of plastic waste with this idea,” he says. “It’s more about giving artisans work and creating a new consciousness around the PET bottle, for both maker and consumer.” 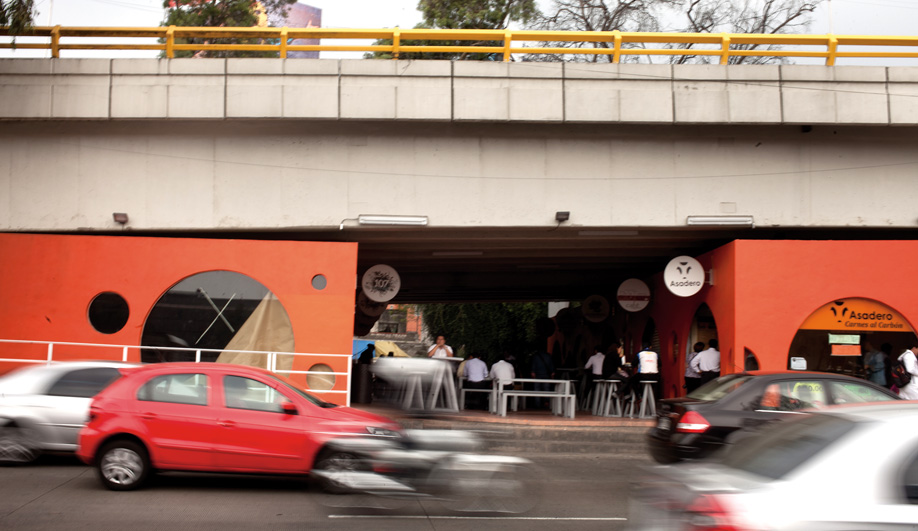 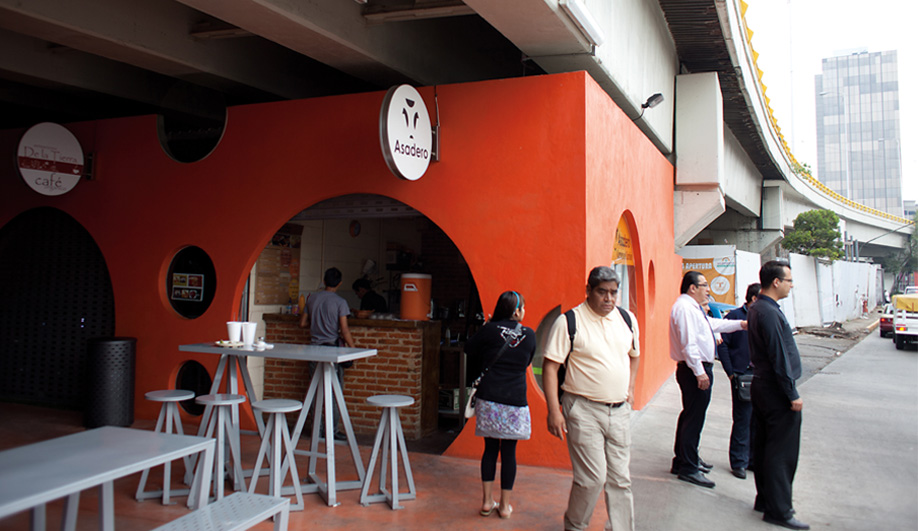 At a congested intersection in downtown Mexico City, the bright orange cladding of the Asadero café can be seen tucked underneath a bridge. At noon, the place hums with workers seated on bar stools, munching on tacos. A year ago, there was nothing here but debris and the occasional vagrant – a virtual no man’s land in the heart of the city. This un­expect­ed haven’s transformation is part of an initiative run by the urban development department, which aims to find cost-effective ways of altering some of the city’s scrappiest streets in small but impactful ways.

The Under Bridges program (“Bajo Puentes” in Spanish) is among its most successful initiatives so far. By leasing spaces beneath freeways to in­vest­ors, the city has hatched a new micro-commerce model through which vendors can set up shop permanently. The only criterion is that half of the site be carved off for public space: playgrounds, gardens or outdoor exercise areas. The remaining land is split between parking and revenue-generating ventures.

City official Eduardo Aguilar, who helped spearhead the plan, says the model is based on schemes found in other urban centres. What makes Under Bridges unique, however, is that it hasn’t cost the city a cent. The investors do the initial cleanup, secure the site, install essential utilities and find city-­approved vendors.

“These places are well lit at night,” says Aguilar, “and they attract a lot of people,” which improves safety. Without the need for financial output at the city level, the project has mushroomed. According to Aguilar, five more Under Bridges locations are under construction, and 30 more have been identified as ideal candidates. By Catherine Osborne 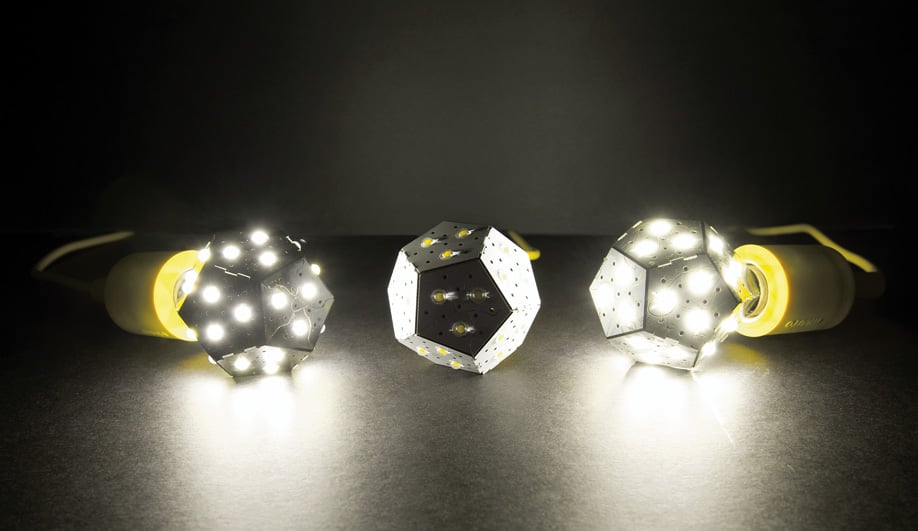 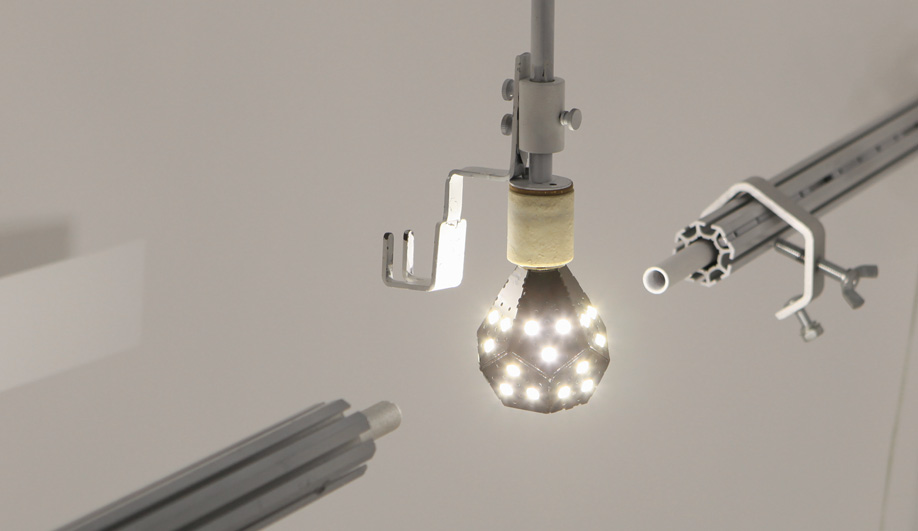 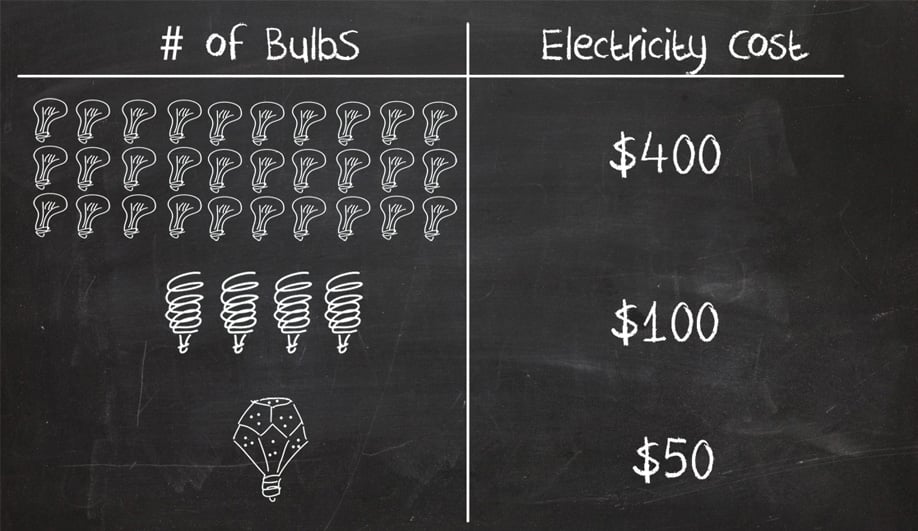 Savour the next time you change a light bulb, because you might not have to do it again for another 25 years – that is, if you use a NanoLeaf. The origami-like bulb is considered the world’s most energy-efficient LED. Using just 12 watts of power, it generates the same amount of light as a 100-watt incandescent and burns 30 times longer.

The fixture was engineered by Gimmy Chu, Tom Rodinger and Christian Yan, three University of Toronto graduates who met in 2004 while looking to get some hands-on experience in electronics design. In 2011, they came up with a key innovation: by replacing the traditional bulb with a multi-folded circuit board form, they managed to eliminate the usual hardware and glass encasement. The resulting light spreads a speckled warm hue through 33 embedded diodes.

A Kickstarter campaign launched in January generated $287,000 from 5,746 backers, surpassing the initial start-up goal by tenfold. “That success has opened up many opportunities,” says Chu. “We’ve just finished manufacturing our first 1,500 lights, and the numbers will keep going up.” (The bulbs retail for $50, from thenanoleaf.com.)

Chu says the light also fuels a personal challenge the team is firmly committed to: “We’re planning to reverse our combined carbon footprint. If we could at least make it net zero, that would be a success.” NanoLeaf is an impressive start.