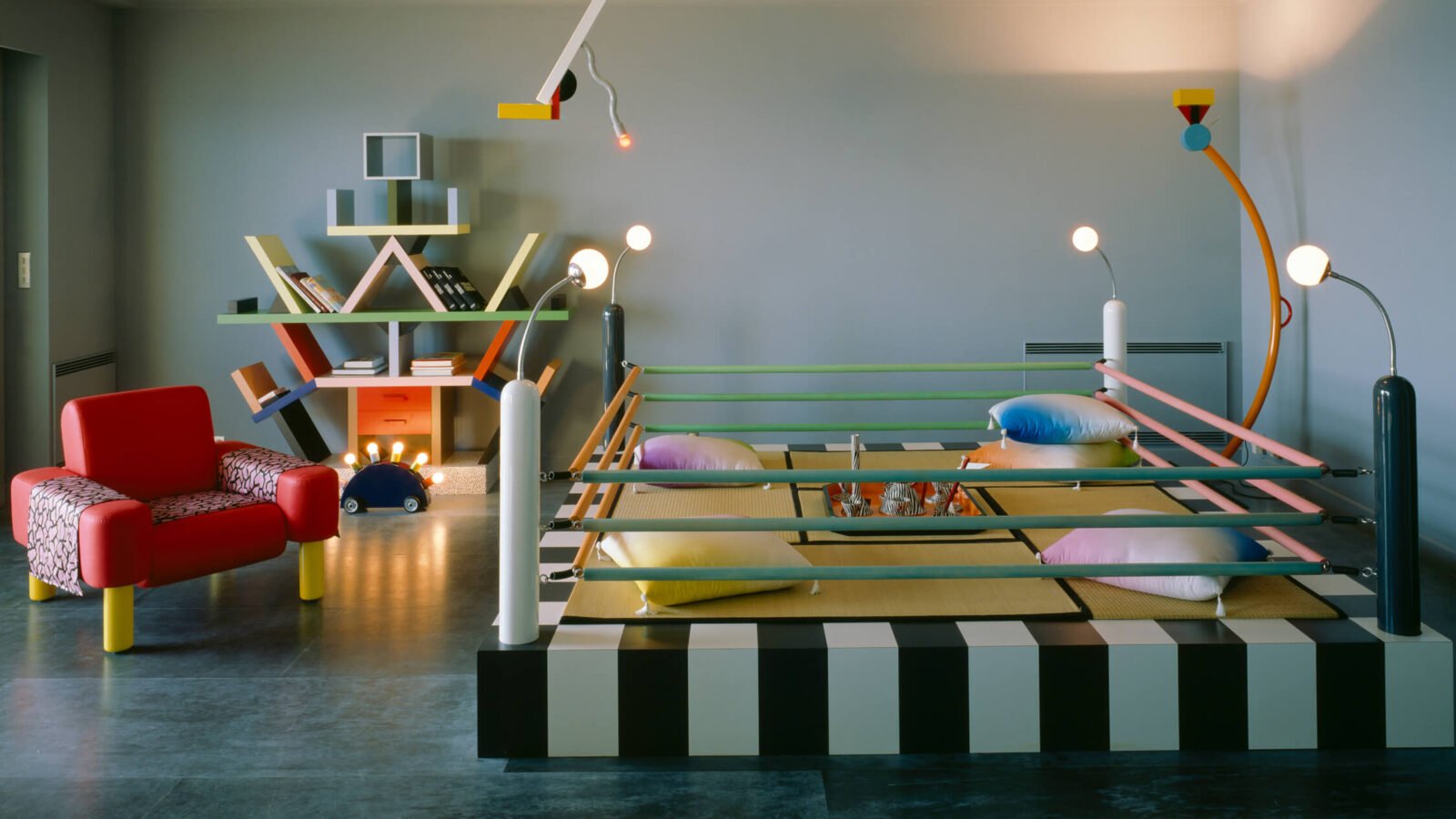 5 Iconic Spaces That Shaped How We Live

What’s in a home? In both the material and metaphorical senses, the structure has been central in questioning where and how we should live. Homes frame our rituals and choreograph our familial relations; they exist as physical records of social and cultural values and much more. It’s these largely immaterial forces embedded therein that drive “Home Stories: 100 Years, 20 Visionary Interiors,” an exhibition on now at the Vitra Design Museum that traces a history of 20th century domesticity through the spaces that have given it form.

“Our homes are an expression of the way we live,” explain the curators. “They shape our everyday routines and fundamentally affect our well-being.” Of the 20 landmark domiciles on display — ranging from a contemporary treehouse and a plastic-coated bunker to fashion designer Karl Lagerfeld’s residence turned Memphis showroom (above) — these five iconic interiors house the big ideas that have fundamentally transformed how we think about “home.”

Spurred by the discovery of DNA in the 1950s and the opportunity to shape urban space in the years following the Second World War, a group of Japanese architects developed a unique language dubbed Metabolism, which related architecture not only to technology, but to the essential properties of living systems. One of the few utopic Metabolist visions to move from scale model to physical structure, Kisho Kurokawa’s 14-storey Nakagin Capsule Tower from 1972 was envisioned as a series of 140 hotel suites connected to one of two central cores floating above a horizontal podium.

Originally conceived as a rest-stop for Japanese businessmen working late in central Tokyo, the four-by-two-and-a-half-square-metre spartan rooms include a curving bathroom (fitted with a small sink, toilet and shower), a modular wardrobe (featuring a fold-out work surface) and a small bunk nestled near a large oculus offering views into the bustling city beyond. Lined in wall-to-wall carpeting, the prefabricated units were designed to be easily attached (and detached) from the central core as required, mimicking the structure of DNA, as various particles attach to the central double-helix core.

“We regard human society as a living process,” Kurokawa once said of the group’s goals. “We do not believe that Metabolism only indicates acceptance of natural, historical processes; rather, we are trying to encourage the active metabolic development of our society through our proposals.” Though his claim may be a lofty one, this iconic structure continues to endure (even in the wake of its potential demolition), offering a brief insight into what biological architecture once looked like.

After relocating to Brazil with her husband in 1946, Italian expat Lina Bo Bardi quickly established her own practice and began work on her personal residence, which would mark the architect-writer- editor’s first built project when it was completed in 1951. Located outside the vibrant metropolis of São Paulo, Casa de Vidrio (also known as the Glass House) is a unique exercise in adapting European modernism to both the climate and vernacular of Brazil, and in living with as well as upon nature.

Elevated on slender blue pilotis and framing an old-growth tree, the single-storey structure features a sprawling great hall glazed on three sides to frame the home’s relationship with the surrounding Atlantic forest. “This residence,” said Bo Bardi, “represents an attempt to arrive at a communion between nature and the natural order of things.”

She added, “I look to respect this natural order, with clarity. I never liked the closed house that turns away from the thunderstorm and the rain.” As a result, Casa de Vidrio stands in stunning contrast to the cerebral and distanced compositions of her American contemporaries. As opposed to Mies van der Rohe’s controversial Farnsworth House, which turned a weekend getaway for Dr. Edith Farnsworth into a transparent cage, or Philip Johnson’s own Glass House, in Bo Bardi’s hands, glass becomes a powerful metaphor for the home – enclosing the natural world while simultaneously casting private life as an extension of it, all without fear of the weather outside.

More often than not, it’s shifts in technology that result in the most visible (and central) transformations to how we live. Case in point: Ludwig Mies van der Rohe’s Villa Tugendhat in Brno, the Czech Republic. Constructed between 1928 and 1930 for Fritz and Grete Tugendhat, the three-storey residence on a hill leverages structural advances to transfer the brunt of the building’s load to the exterior walls and to the grid of chrome-plated columns dotting the plan. Since interior partitions don’t have to do the heavy lifting, they instead become devices to choreograph domestic life.

The result is a “fluid space in which carefully placed furnishings and textiles created islands for different uses,” according to Vitra Design Museum’s curators. Grete Tugendhat, for her part, noted at the time, “I truly longed for a modern spacious house with clear and simple shapes.” And, van der Rohe, alongside then partner Lilly Reich (who, in addition to the interiors, helped devise many of the custom furnishings) delivered.

Riffing on the work of his De Stijl contemporaries like Piet Mondrian and Theo van Doesburg, van der Rohe translated the iconic planes of white, blue, red and yellow into a composition of marble partitions, woven rugs and book-matched veneer that divide the largely open plan into its functional zones. Among such areas is the semi-circular, wood-clad dining room populated with the MR50 Chair, designed specifically for the project. While the home was only used by the family for eight years before the outbreak of the Second World War, Fritz Tugendhat was the first to attest that it had everything a modern man could ask for.

4
House of the Future by Alison and Peter Smithson

In a striking departure for the neo-brutalist pair, English architects Alison and Peter Smithson’s House of the Future was a plastic-coated post-war fantasy. Commissioned by the Daily Mail newspaper in 1956 for the “Daily Mail Ideal Home Exhibition,” the show home-cum-installation was lined in a marigold plastic skin that comprised ceilings, floors and gracefully curving walls to present a seductive image of what life might be like a quarter-century hence. 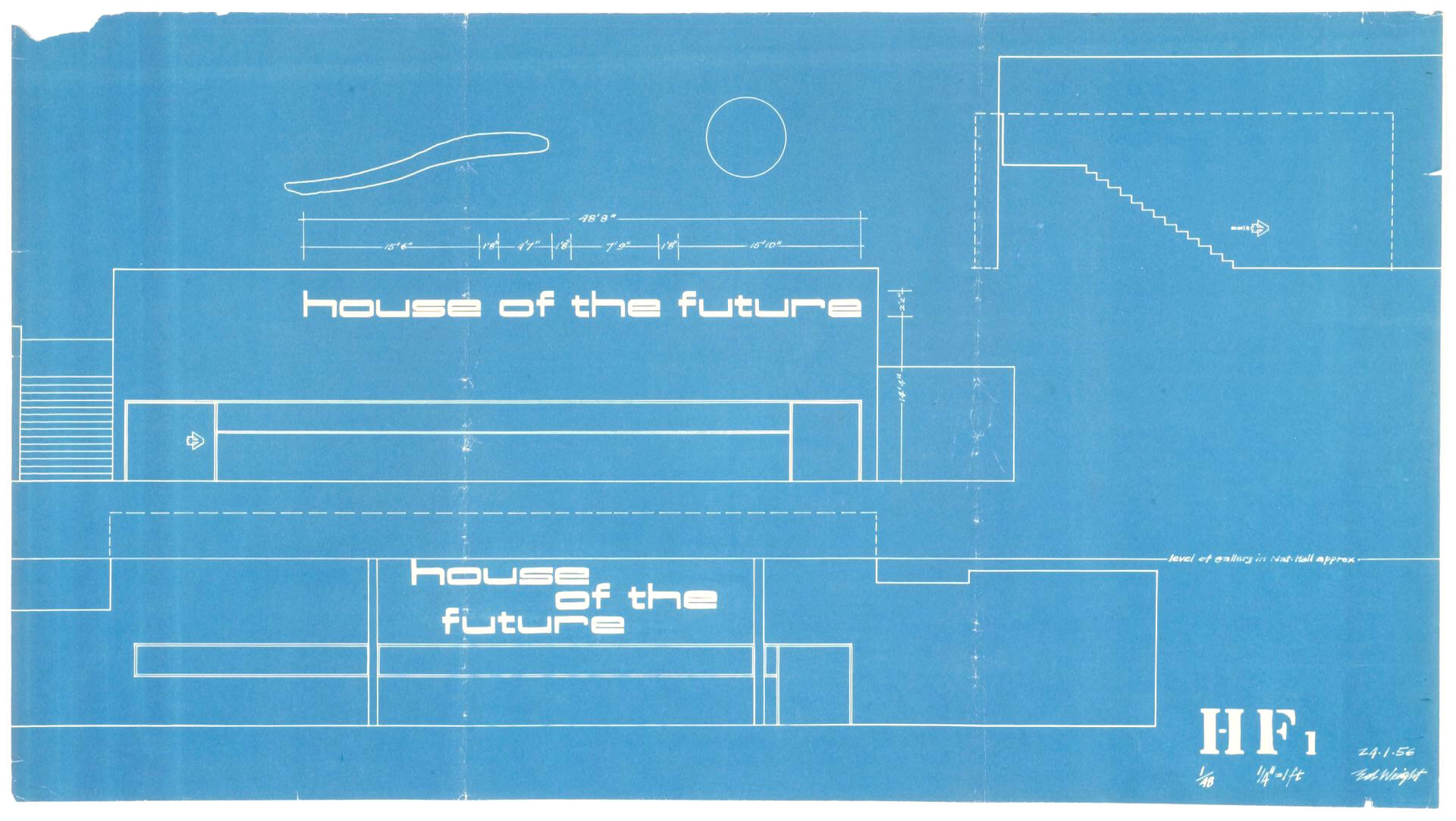 In preparing for the world of 1981, the architects designed a residence that was distinctly more bunker than domicile – entirely closed off from the outside, aside from an automatic door, a few well-placed peep-holes and a mail hatch. Inside, the entire home orbited a central courtyard, where a moulded-metal reinforced fabric was intended to provide the threshold between the interior spaces (the membrane was never included in the final installation).

The structure was plastic in every sense of the word. The kitchen sink, the sunken bath and even the hand basins were made of pimento-red fibreglass. The curtains were composed of orange fibreglass, the cushions in blue nylon. The furniture even melded into floors and wall, becoming one with the home, while the single movable furnishing (a dining chair) boasted a seat of clear plexiglass. Food arrived in the home wrapped in plastic and exited the same way. The architects also collaborated with designer Teddy Tinling to customize the outfits worn by the models within (notably dressing their future-homeowners in mini skirts almost a decade before they became widely produced).

“The House of the Future,” the Smithsons later wrote, “confronted the changes [introduced by the] domestic machines, the emergent consumerism, the anticipated technology of the 1980s.” Whether drawing analogies to the cavernous spaces of primordial humankind (perhaps the original bunkers) or submarines or spaceships, Alison and Peter Smithson translated a deep sense of post-war anxiety into their dystopian domestic landscape, one that feels ever relevant in a politically uncertain world.

In the late 1960s, chemical manufacturer Bayer began its tradition of renting a “pleasure boat” during the annual Cologne Furniture Fair and commissioning leading designers to craft unique spatial experiences within for visitors. Following Italian designer Joe Colombo’s project in 1969, Danish designer Verner Panton was tapped in 1970 to helm the experimental installation – and he transformed the maritime vessel into a vibrant, synthetic fantasy floating down the Rhine.

Though surrounding spaces featured Kusama-esque interiors of fluorescent plastic orbs, the most striking portion of Panton’s installation came in the form of a plush, cavernous structure. Translating geologic formations into upholstered cocoons that deftly blend floors, walls, ceilings, furniture and even lighting into enveloping rings (creating a gradient from blue to purple to blood orange and back again), the designer crafted one of the most enduring icons of the period’s radical design movement: a self-described “Phantasy Landscape” that succinctly captured the imperatives of Panton’s contemporaries such as Archigram, Superstudio, Gaetano Pesce, ArchiZoom and more, questioning the limits of rationalism.

For visitors able to make the trek to Vitra’s campus, a contemporary iteration of the 50-year-old interior has been installed as part of the exhibition.