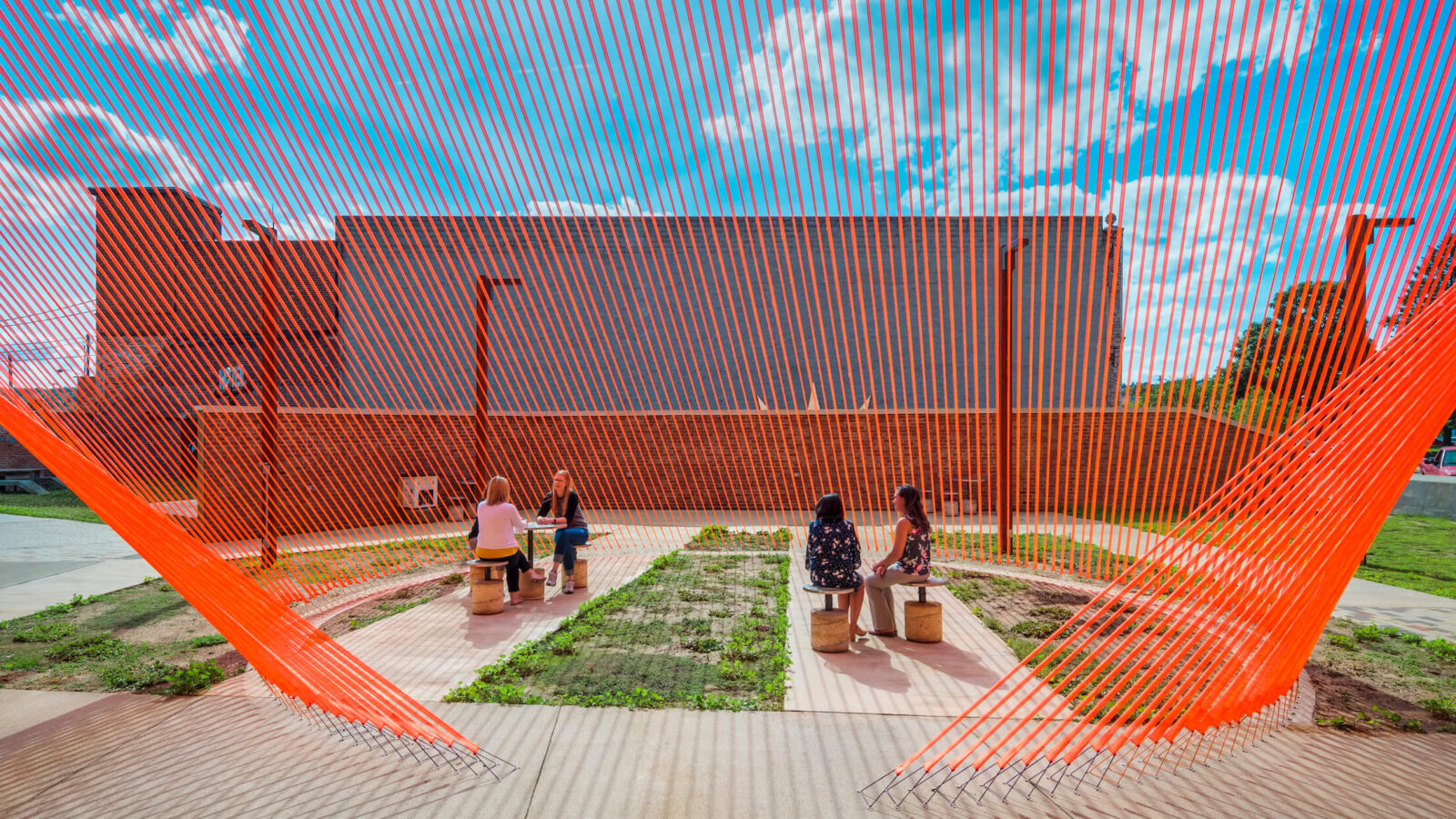 5 (More) Pavilions that Say Goodbye to Summer in Style

Summer’s not over yet! We look at five standout pavilions that make the most of the season with thought-provoking architectural folly.

The days are slowly getting shorter, but summer is still here. To make the best of what’s left of the season, we follow up our July round-up of outdoor pavilions with a look at another five thoughtful and visually striking architectural follies that make the summer of 2019 one to remember.

An urban intervention beneath MVRDV’s Bałtyk tower at a busy pedestrian throughway in the heart of Poznan, Poland, Totemy is an arresting visual commentary on the global climate crisis. The work of artist Alicja Biala and architect Iwo Borkowicz, the six nine-metre-tall wooden totem poles vary in shape, colour and pattern, with each one representing a different aspect of current environmental concern.

The individual volumes were handmade by Biala, who hosted open-door workshops throughout the process to engage local woodworkers, students, politicians, activists and other community members to help and be involved. Each tower features its own stacked bar graph–like illustrations, which were interpreted from statistics on worldwide deforestation, air pollution, water consumption, plastic production and waste, ocean and marine health and the global wildlife population.

Providing more than a mere walk-through moment, each sculpture also has a QR code that can be scanned to reveal the numbers behind each of the pattern’s proportions. Wanting the pieces to be “expressive, but objective and factual,” the two thoroughly researched and verified the statistics represented. 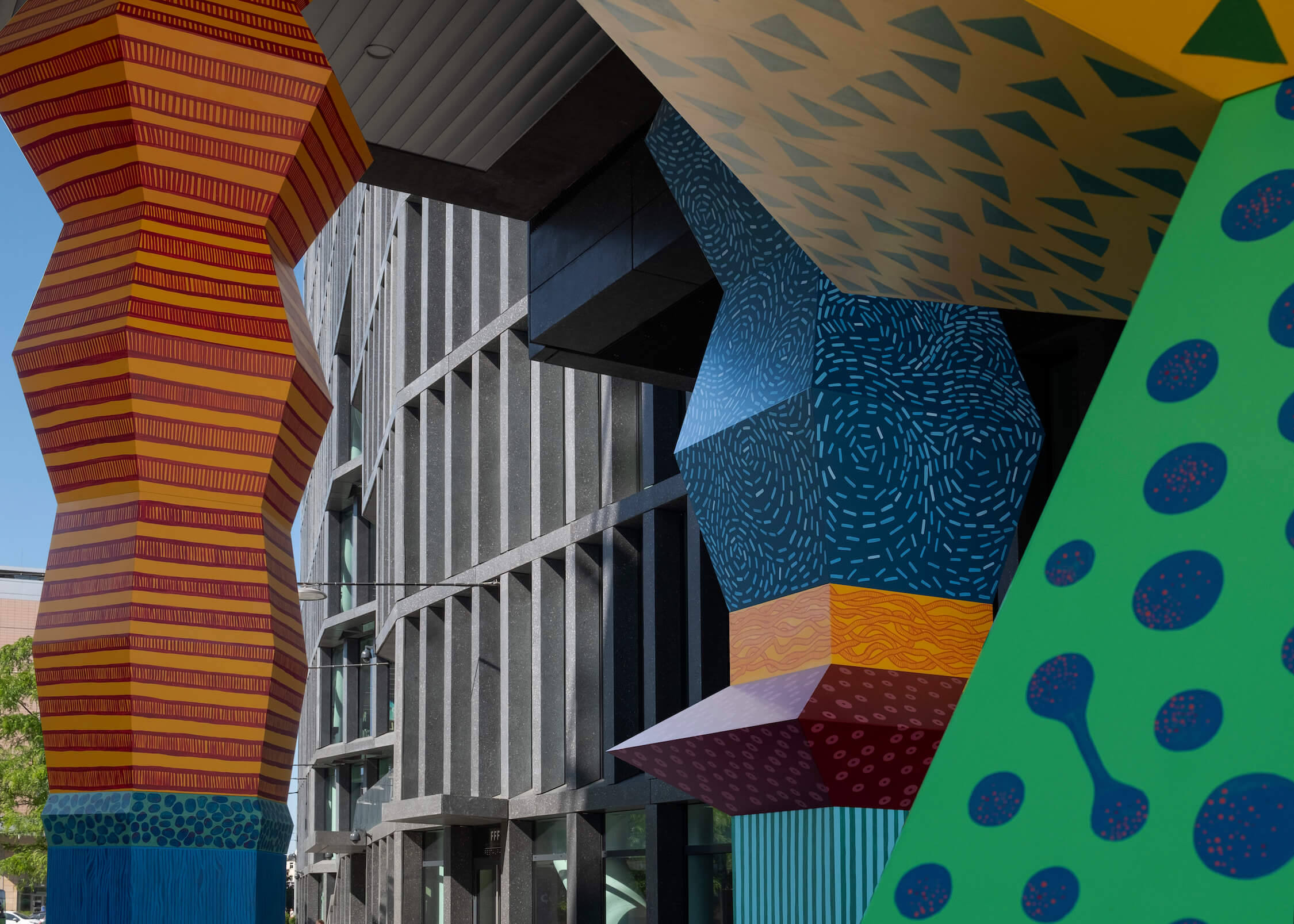 So far, the installation has been met with positive reviews and Biala and Borkowicz have begun conceptualizing totems for other cities and countries, potentially turning the series into a travelling conversation to highlight the human impact on nature.

It’s no secret that Toronto needs thoughtful housing strategies to meet the demands of its growing population, who in turn need affordable and practical-sized living spaces. Winnipeg-based PUBLIC CITY were mindful of this in their design for their City of Toronto–commissioned project, Flat Park, which is part of the King Street Transit Priority Corridor until December 31.

“It’s part flat, part park [and] made to travel. It’s designed to provoke some thinking about the pressures of private space upon the urban public realm,” says PUBLIC CITY principal architect Peter Sampson.

Built by WoodAnchor, Flat Park is a 120-square-foot outdoor public living unit, which is about the size of a parking space and – in some urban cities – approximately the same size of a micro-flat. Made from laser-cut and welded flatstock steel, painted in bold and vibrant pinks and oranges, the project aims to illuminate the tensions between private and public living spaces within urban spaces.

More important, it allows city dwellers who interact with it to think of temporal spaces as creative and social hubs that act as sites of curiosity.

3
Where the Rainbow Ends in Cannes, France

A mirrored view of Cannes spans the glass face of Germans Ermičs‘s Where the Rainbow Ends. Debuted alongside this year’s Cannes Film Festival, the seasonal installation – which was commissioned by Instagram – is a work of architecture that expresses a rich spectrum of colour through glass. The delicate ombré of tones evokes the ethereality of a rainbow, imbuing the structure’s reflected surroundings with a delicate and changing beauty. Every shift of light, shadow and perspective alters the view, inviting visitors to make their own art with it – via Instagram, of course – and share in the process of creation. 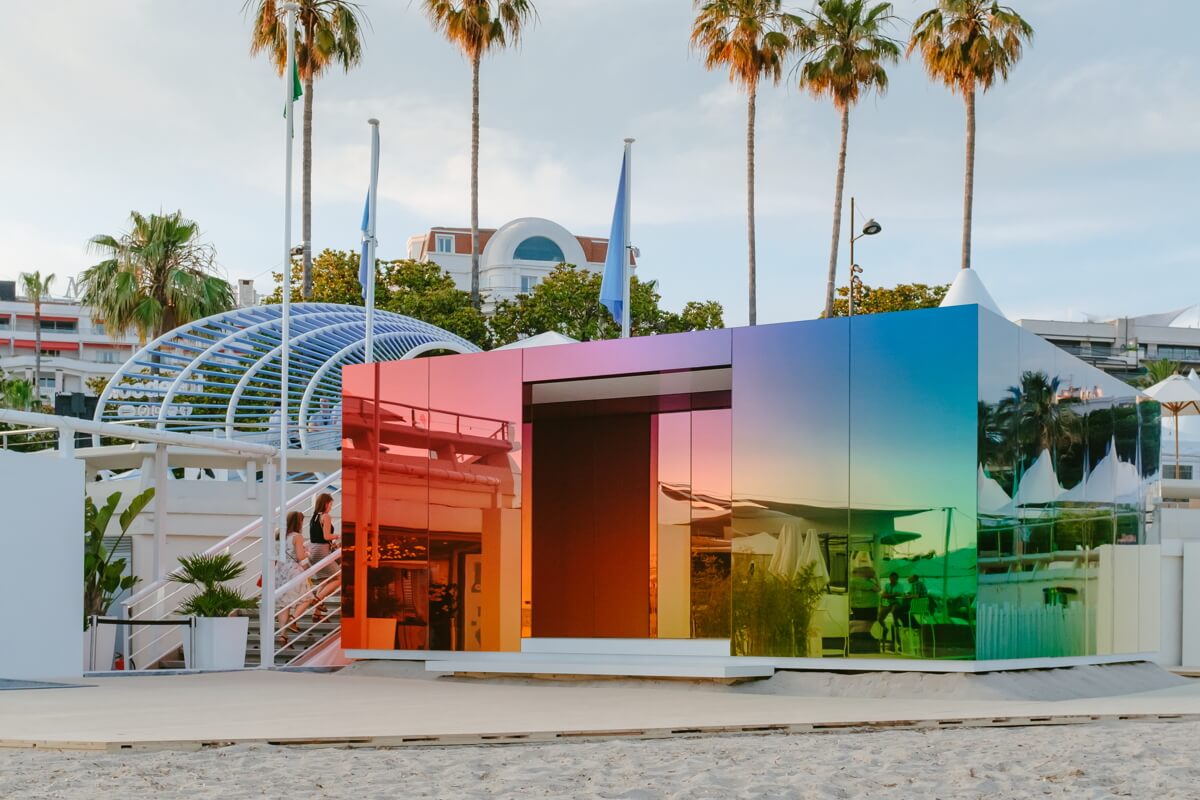 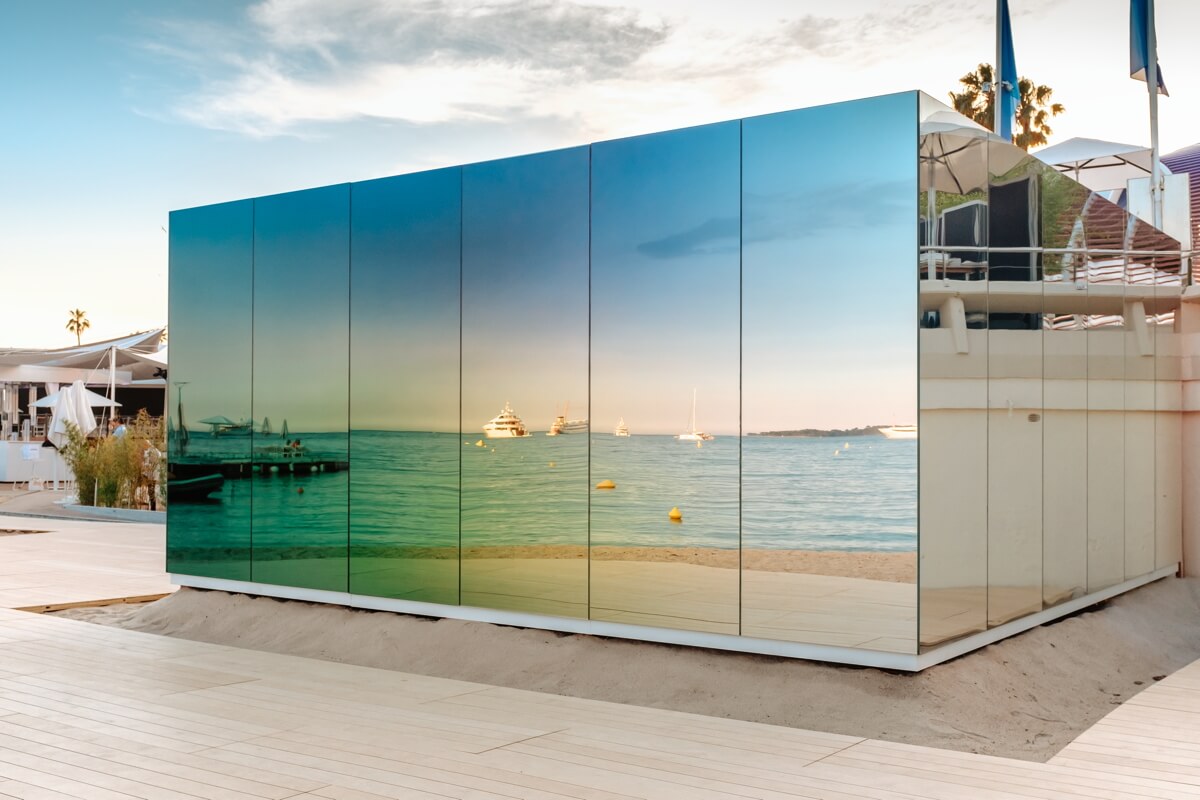 Stepping into the seaside structure, a different experience awaits. Where a bold spectrum of colour wraps the exterior, a pared-down room creates a quieter and more contemplative space. Here, a simple white bench is contrasted with a more dramatic glass chair; an electronic soundtrack of Domenique Dumont and a lighting program by Urban Electric round out the multi-sensory showcase.

Embracing a symbol of the LGBTQIA+ community, Where the Rainbow Ends celebrates diversity and pride, while evoking both the scientific wonder – and simple, primal joy – of light. It’s a portal to a strange and beautiful dimension.

Call it a case of blight made right: When a hotel was razed by fire in downtown Coshocton, Ohio, a small county hub northeast of Columbus, the local Pomerene Center for the Arts took over the site and turned it into artPark, a community park meant to engage area residents through cultural programming. The latest intervention – intended “to work around and with” previous interventions – is a temporary shade structure not only erected for those residents but also by them.

Made of scrap material from a manufacturer of coated mesh fabric in nearby Dover, Ohio, the structure, called Coshocton Ray Trace, was designed by Behin Ha, a New Jersey-based design studio run by Behrang Behin and Ann Ha. Their concept, which strings light ribbons of the bright orange mesh between an existing steel balcony structure and the ground, was made intentionally straightforward so that the community could be involved in the installation. After some preparatory work by local contractors, assembly was a simple matter of tensioning the ribbons between pre-designated anchor points and stapling them in place. The anchor orientation at the top and bottom create a twist in the ribbons, making the installation more transparent at eye level and more opaque on top.

Besides the flexibility of Coshocton Ray Trace, which has functioned not only as a park attraction but also as a forum for more formal gatherings, such as city council meetings and music performances, the structure also boasts a low ecological footprint. At the end of the summer, the installation will, as conceived by Behin Ha, be (easily) dismantled and returned to the manufacturer for recycling, leaving only a happy memory of its seasonal run.

5
The Colour Palace in London, UK

The Colour Palace was erected in June for the London Festival of Architecture but will remain up until September 22 – which is great news for kids and adults alike. Designed by Peckham-based architecture practice Pricegore and British-Nigerian artist-designer Yinka Ilori, the structure is made of thousands of hand-painted timber pieces – the identical building components reveal their joinery to emphasize how the structure is crafted.

Built next to the Dulwich Picture Gallery, the competition-winning pavilion takes its inspiration from many eclectic sources, including local ones: the cubic composition of the gallery itself and the local Middle English tradition of raising storage buildings on staddle stones. Hence its bold-red cylindrical feet that make visible the entrance ways – namely, fuchsia staircases – up and into the pavilion.

The Most Intriguing Summer Pavilions of 2019
Temporary architecture marvels around the world by Francis Kéré, Pedro & Juana, Somewhere Studio and more.
Read More

It also draws from Ilori’s Nigerian roots: The vibrant geometric patterns, which shift depending on one’s vantage point, recall the fabric markets of Lagos. Inside, a perimeter gantry encircles a theatre-in-the-round central atrium. The programming includes neon life drawing, supper clubs, storytelling and yoga. As the organizers say, the building explores parallels between African and European cultures to create a “building that reflects the diverse, cultural experience of south east London.” It’s also a joyful structure made all the more magical by its ephemeral status.

Summer’s not over yet! We look at five standout pavilions that make the most of the season with thought-provoking architectural folly.