From Atlanta to Venice, these bold follies offer room to relax, play and come together.

The summer months mean one thing: more time spent outdoors. From parks to pools and beaches to boardwalks, residents of urban spaces near and far flock to such public amenities as temperatures rise and the days lengthen. To support this increase in use, these areas are often animated by a collection of temporary structures providing additional room to play, convene and connect. Here are five of these recent temporary interventions from across the world, injecting a serious dose of fun into the great outdoors.

1
OFF FENCE by SKULL Studio and MOLO Architekti 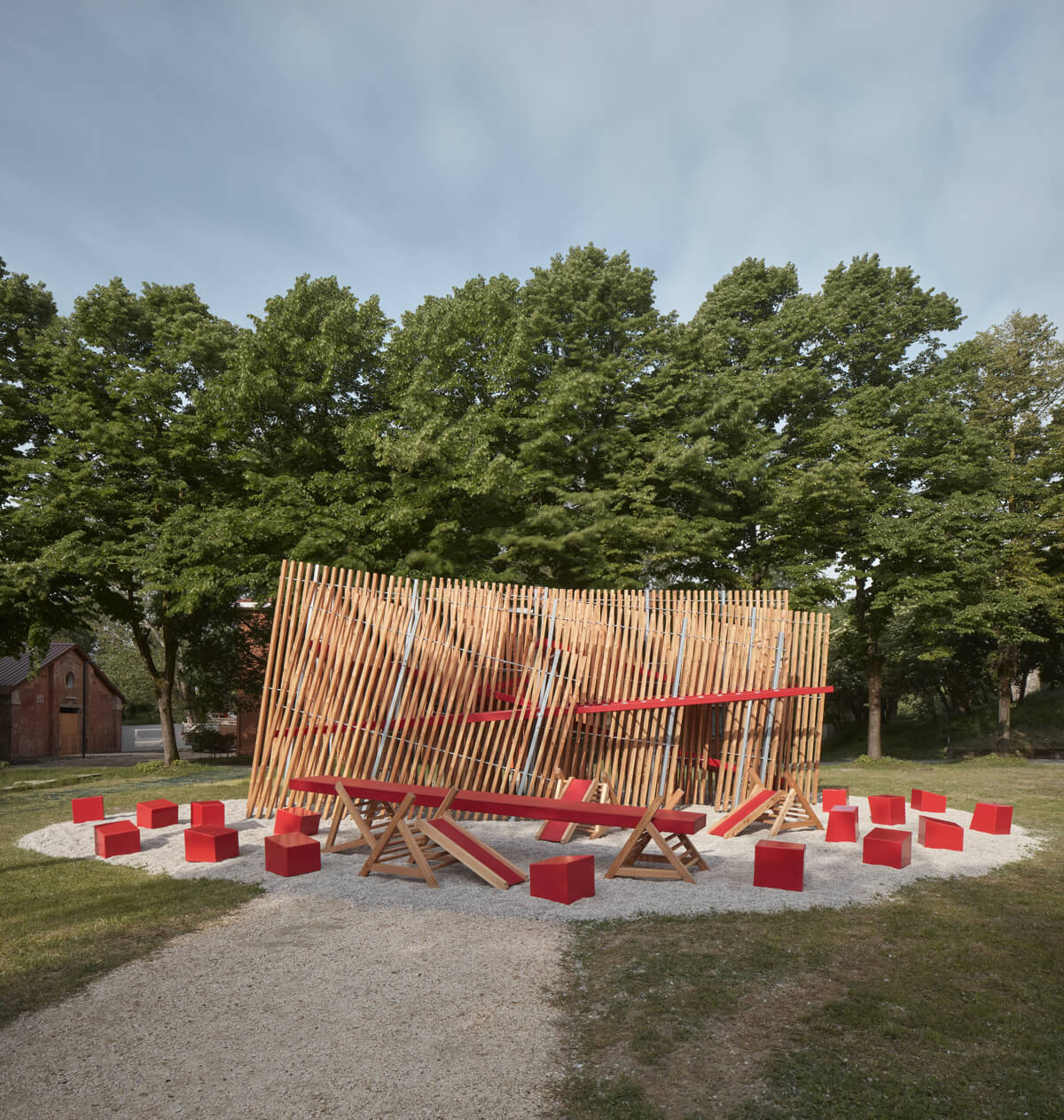 As part of the central exhibition of the 17th Venice Architecture Biennale, curator Hashim Sarkis dedicated a portion of his sprawling showcase — titled “How Will We Live Together?” — to the future of play. Included within the expansive outdoor space of the Forte Marghera was a first-time collaboration between Czech architects Matěj Hájek (of SKULL Studio) and Tereza Kučerová (of MOLO Architekti). For the preeminent expo, the pair took the typology of the fence as a departure point, transforming a structure used to section, demarcate and segregate into a series of semi-transparent walls interspersed with sloping crimson platforms in vibrant red. 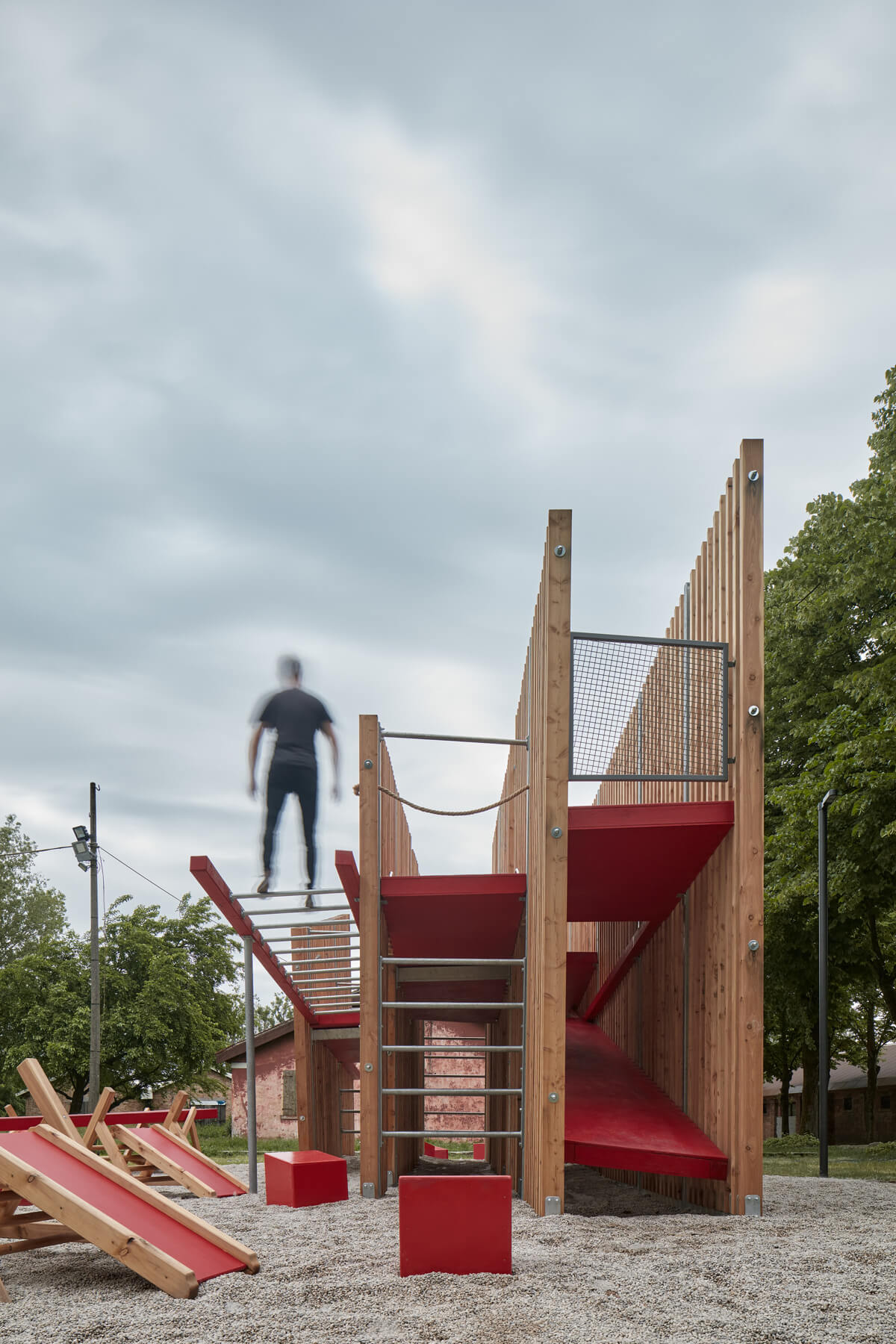 Upon approach, the Siberian larch slats reveal the three-part playscape within, inviting children to climb bars, ascend the plywood ramps and conquer the imposed divides established by the partitions. The installation also speaks to the way children’s spaces are relegated in urban centres, and the potential to reimagine them. “Playgrounds are often designed as the only places for playing,” says Kučerová. “For us, the fence demarcating children’s playgrounds is a symbol of this deficiency. It separates children from the remainder of the urban environment.” On one hand, OFF FENCE may be a whimsical place for kids to interact, on another, it’s a thought-provoking take on this critical social infrastructure for the next generation.

2
Outside the Lines by Bryony Roberts Studio 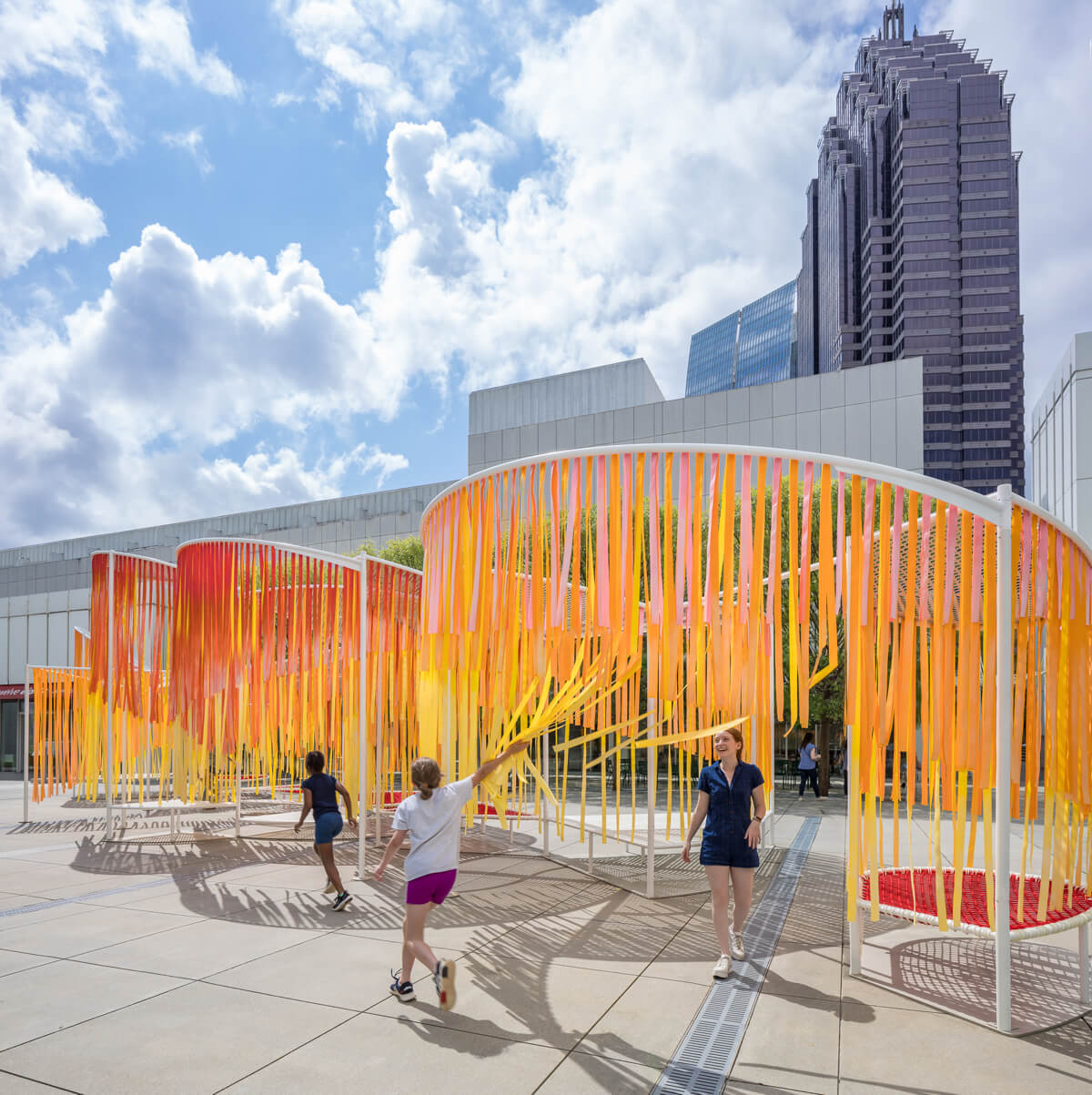 New York-based Bryony Roberts is no stranger to crafting colourful and captivating pavilions. In 2019, the curving Soft Civic installation was a standout among the temporary structures from that year’s edition of Exhibit Columbus. Her latest effort for the High Museum in Atlanta is no different. Called Outside the Lines, it consists of a white steel skeleton that gently curves along its narrow course to create a series of platforms of woven nylon and porous canopies. Thousands of red, pink, yellow and orange strands hang from this frame, animating the space while creating intimate and public zones throughout.

While undeniably elegant, Outside the Lines was also conceived with inclusivity in mind and was an outgrowth of extensive conversations with local disability advocates. To that end, tactile materials — such as the vibrant strands — were leveraged to provide a dynamic sensory experience for users who are visually impaired (achieving “navigation through touch” as Roberts describes) and to offer a more holistic way of accessing the work. 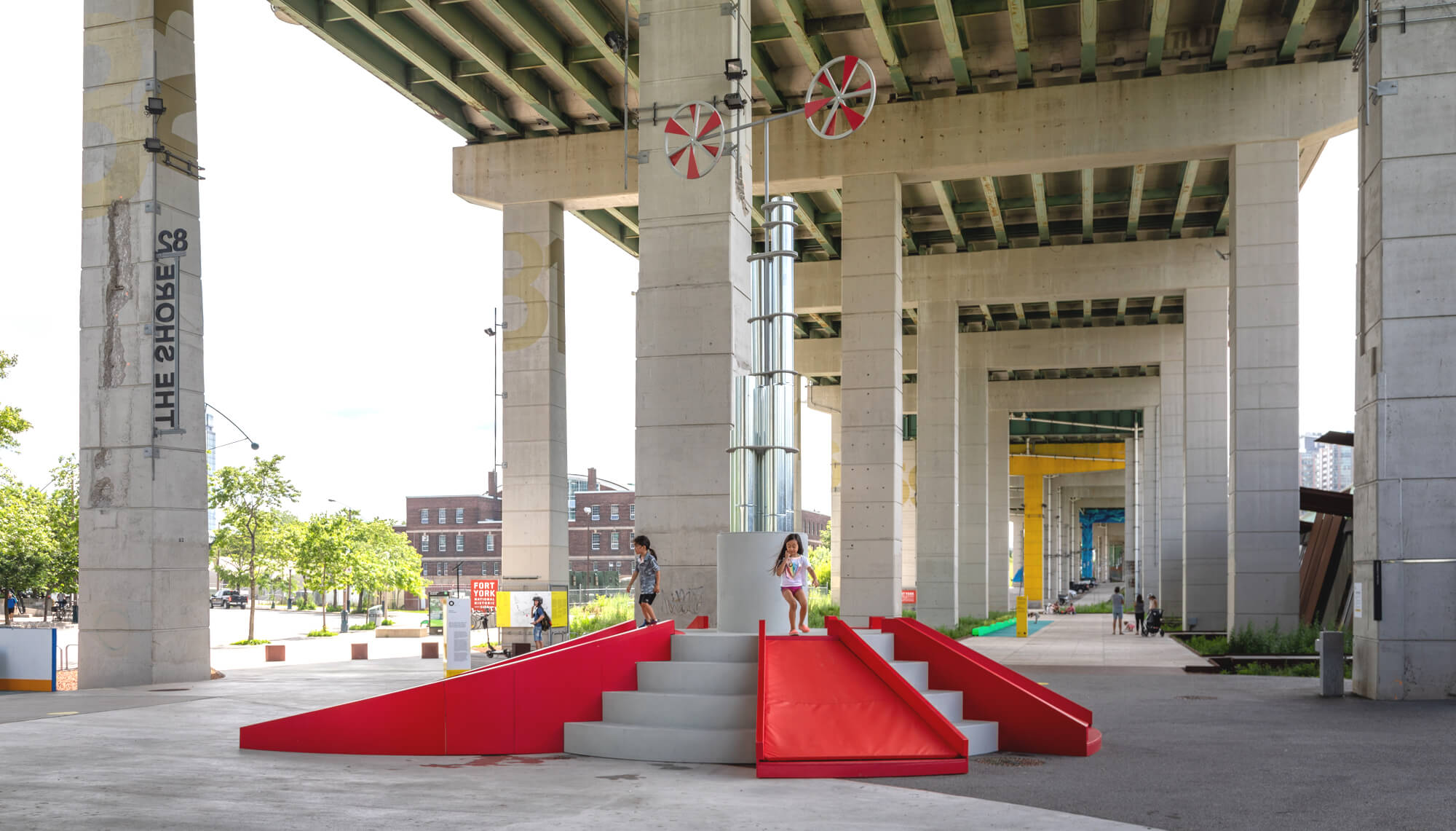 Late last year, Toronto’s The Bentway boldly asserted that its 2021 program would be devoted to play. The institution did not disappoint, commissioning leading designers near and far to propose a suite of charming interventions along the meandering underbelly of the Gardiner expressway and adjacent green spaces. Of the eight structures comprising the program “Playing in Public,” London-based Assemble‘s Big Red is perhaps the most joyous. 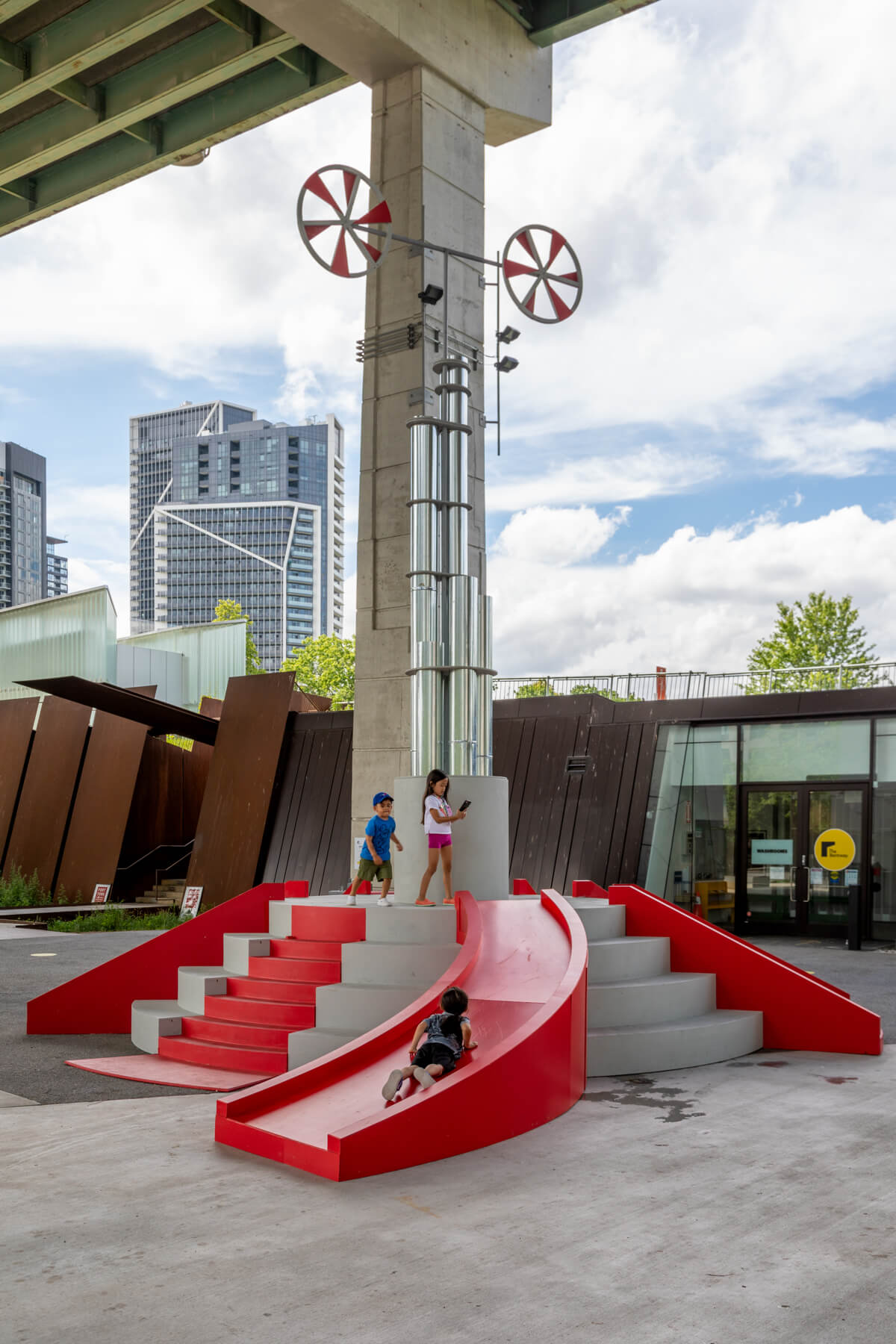 Four curving slides encircle a stepped platform, which also doubles as the base for a tower of tubes that terminate in two pinwheels designed to catch the breeze. If the composition seems strangely familiar, you’re not wrong. Assemble drew inspiration from the vibrant play structures animating a watercolour drawing by the iconic Brazilian architect Lina Bo Bardi of the landscape around her 1968 MASP (Museu de arte de São Paulo). Like the concrete edifice elevated on muscular crimson supports, Big Red leverages an identical colour scheme against an equally brutalist backdrop. 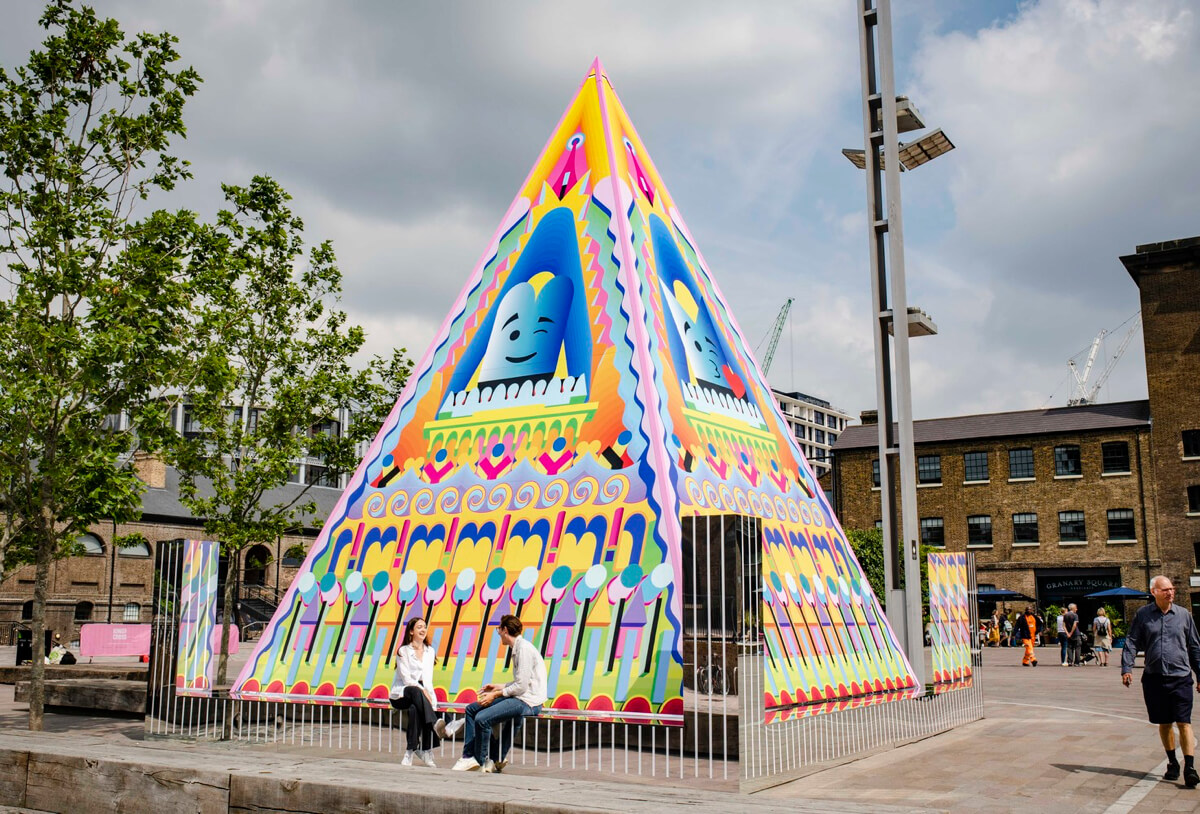 In signature fashion, London-based Adam Nathaniel Furman’s Proud Little Pyramid is vibrant, ornate and tinged with a distinct aesthetic all his own. Nestled in the city’s Granary Square and originally mounted in celebration of Pride this June, the 9.5-metre-tall structure enclosed in mirrored seating will remain as a place of gathering until summer’s end. 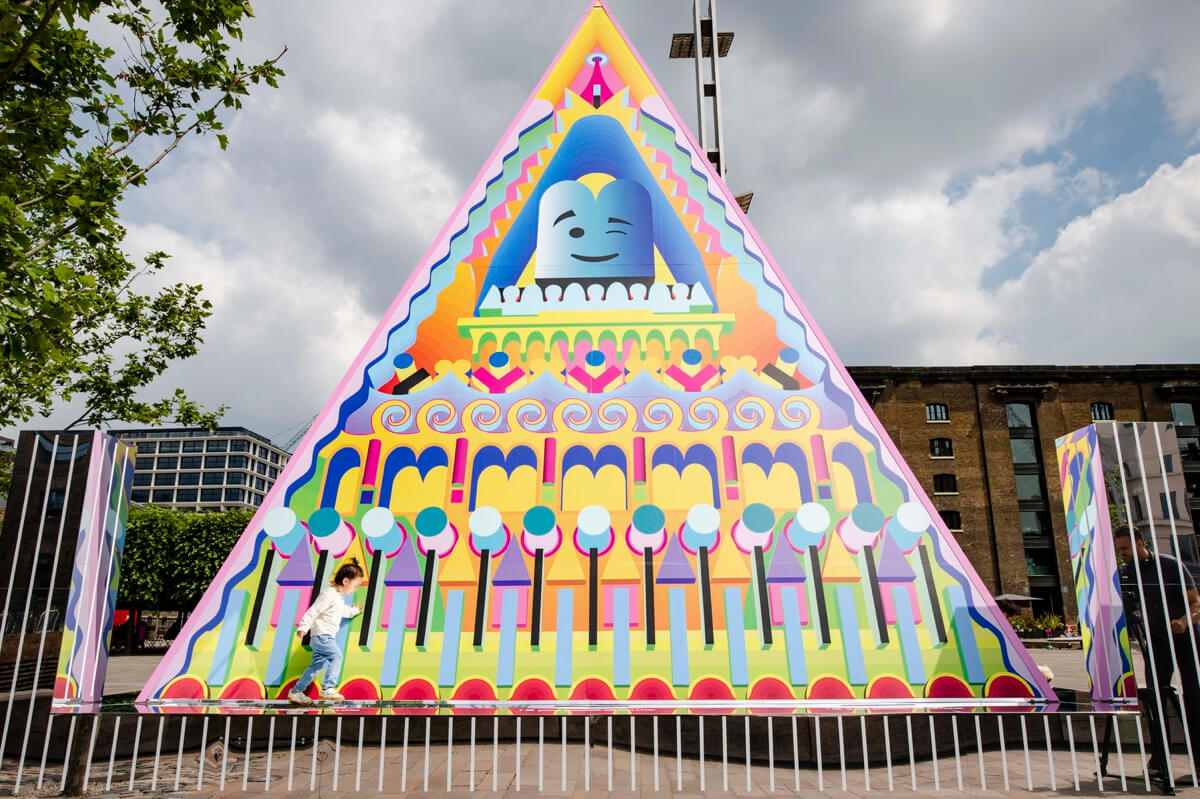 The bold, temporary landmark is adorned with a host of elemental shapes and patterns that offer a camp take on elements of classical architecture: pediments, friezes, tracery and more. In Furman’s hands, these once deeply symbolic forms of architectural communication are reinterpreted as a playful beacon of togetherness.

5
Come Together by Kerim Seiler 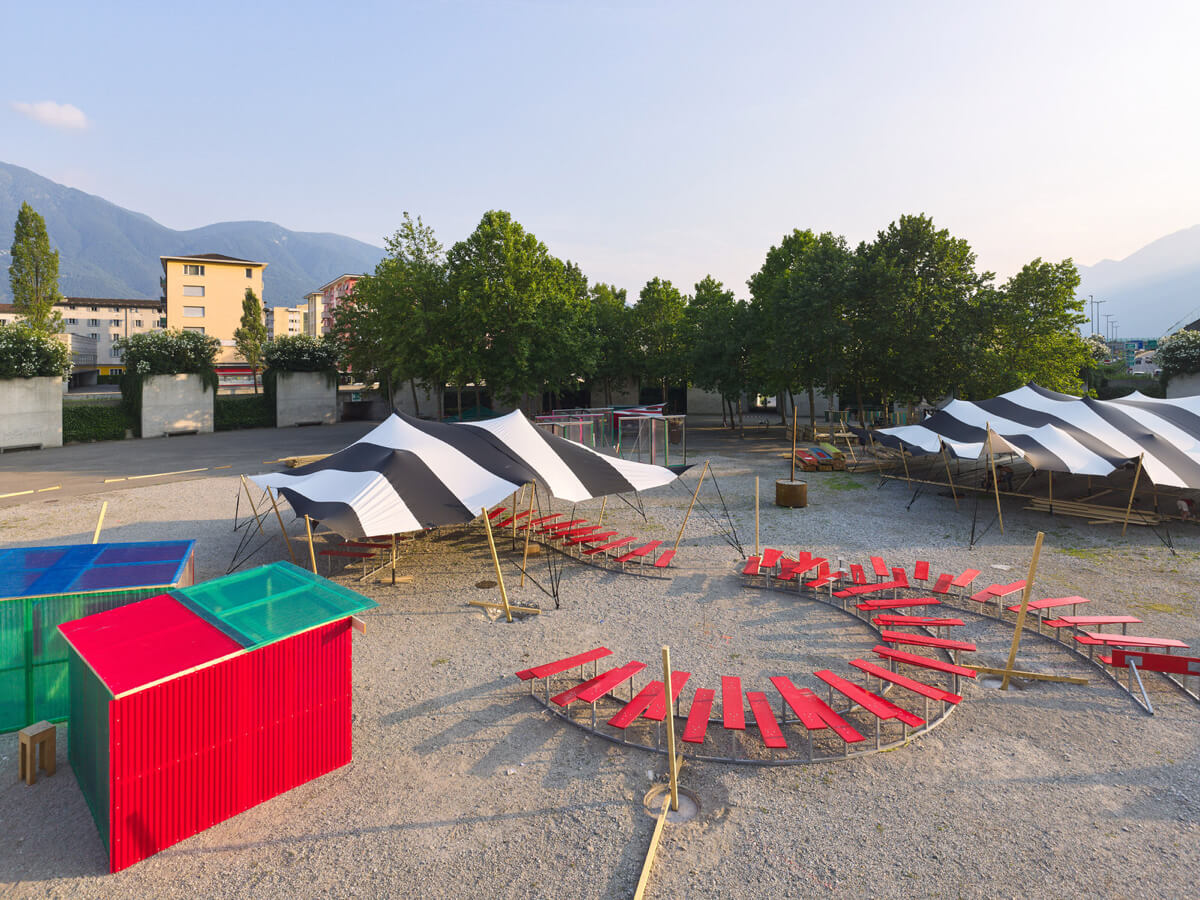 For the 74th edition of the Locarno Film Festival in Switzerland, contemporary artist Kerim Seiler has installed a large-scale pavilion in the event’s 3,000-square-metre central gathering area. The campus-like compound of follies is dotted by references to Seiler’s existing work. There’s the snaking Tschutschu, defined by bright red wooden boards that double as tabletops and seats. It’s partially sheltered by striped canopies to protect guests from inclement weather, which also protects a 250-square-metre platform of rainbow-tinted wooden boards. 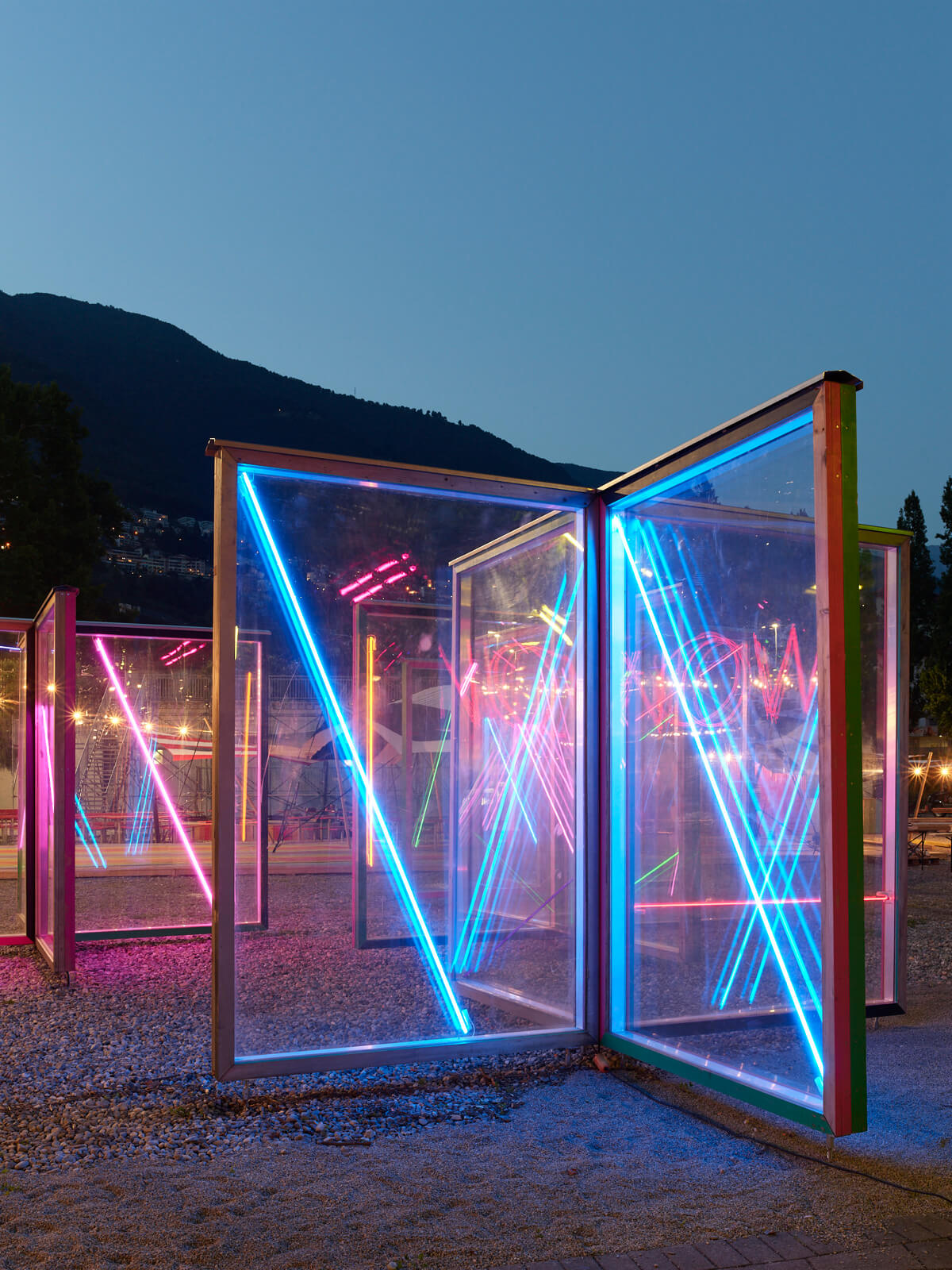 Nearby, a modified version of the artist’s 2012 work 118 minus 11 illuminates the grounds. The series of four three-by-two-metre wood frame modules each house coloured neon tubes mounted at various angles, creating an electric landscape to meander through. (There’s even a multi-coloured bar just beyond.) According to Seiler’s, the assembled structures prompt “a range of sensorial, conscious and subconscious experiences within the same space” that only “fully comes alive” when activated by visitors.

From Atlanta to Venice, these bold follies offer room to relax, play and come together.