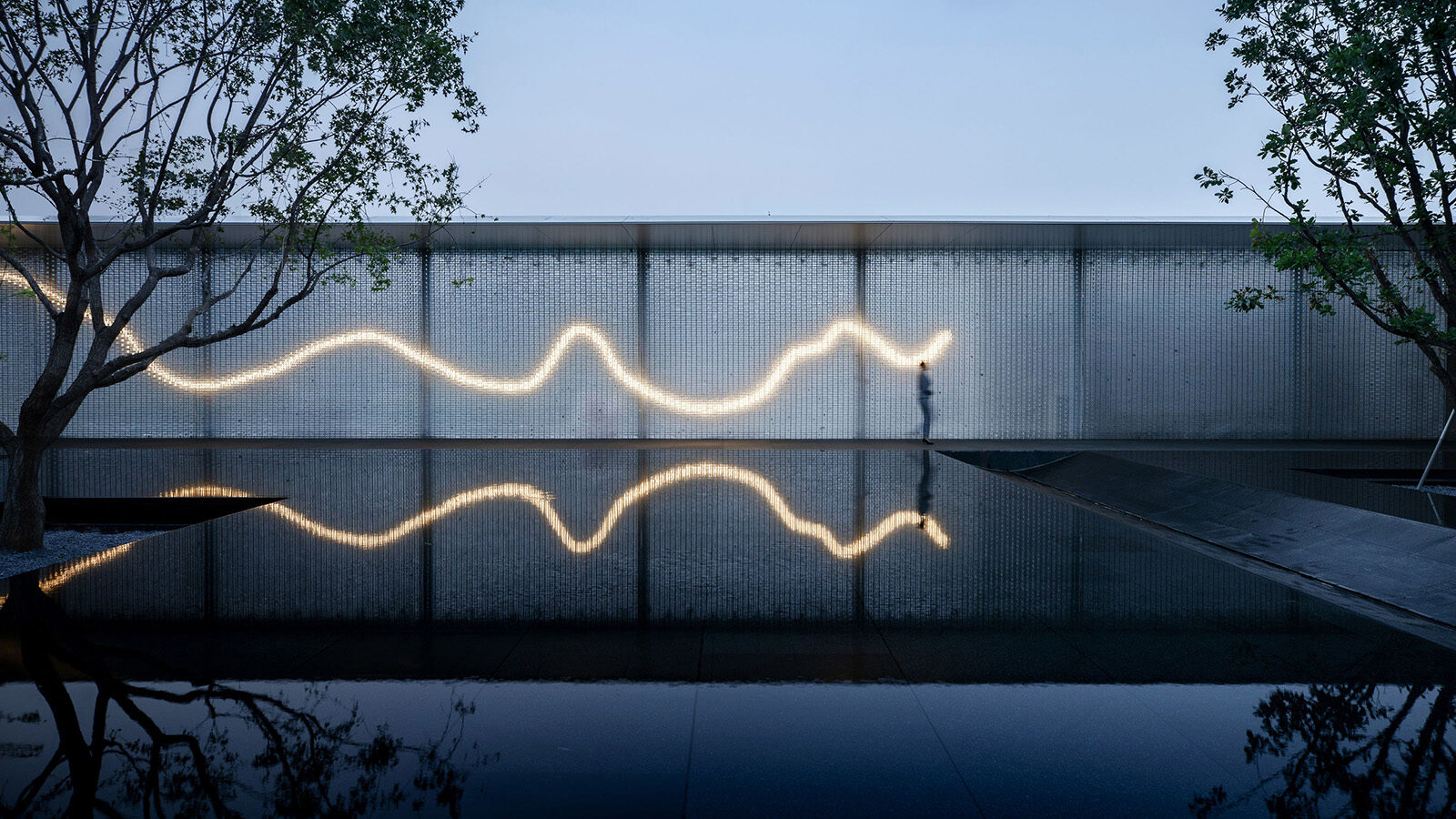 These intriguing — and immersive — installations mine the hyper-local context.

With repeated museum closures, restrictions on outdoor and indoor gatherings, it’s been a difficult year for art lovers. Thankfully, many creatives still found ways to bring their inspiring ideas to the public. Across the globe, various — and mostly outdoor — art installations have popped up, allowing for safe viewing and adorning urban centres or isolated sites with captivating artwork. The following site-specific selections, each decorated with an iF Design Award 2021, are examples of continued innovation and imagination even in the face of challenges. From Switzerland to Korea, these installations interact with their locale to create immersive experiences.

At the heart of the Vallée de Joux in the Swiss Jura, the Musée Atelier Audemars Piguet — an edifice designed by industry heavyweight Bjarke Ingels — houses a peculiar and intriguing exhibition. Engineered by Atelier Brückner, the architectural glass spiral extends the historical building where the renowned watchmaker first opened shop in 1875. 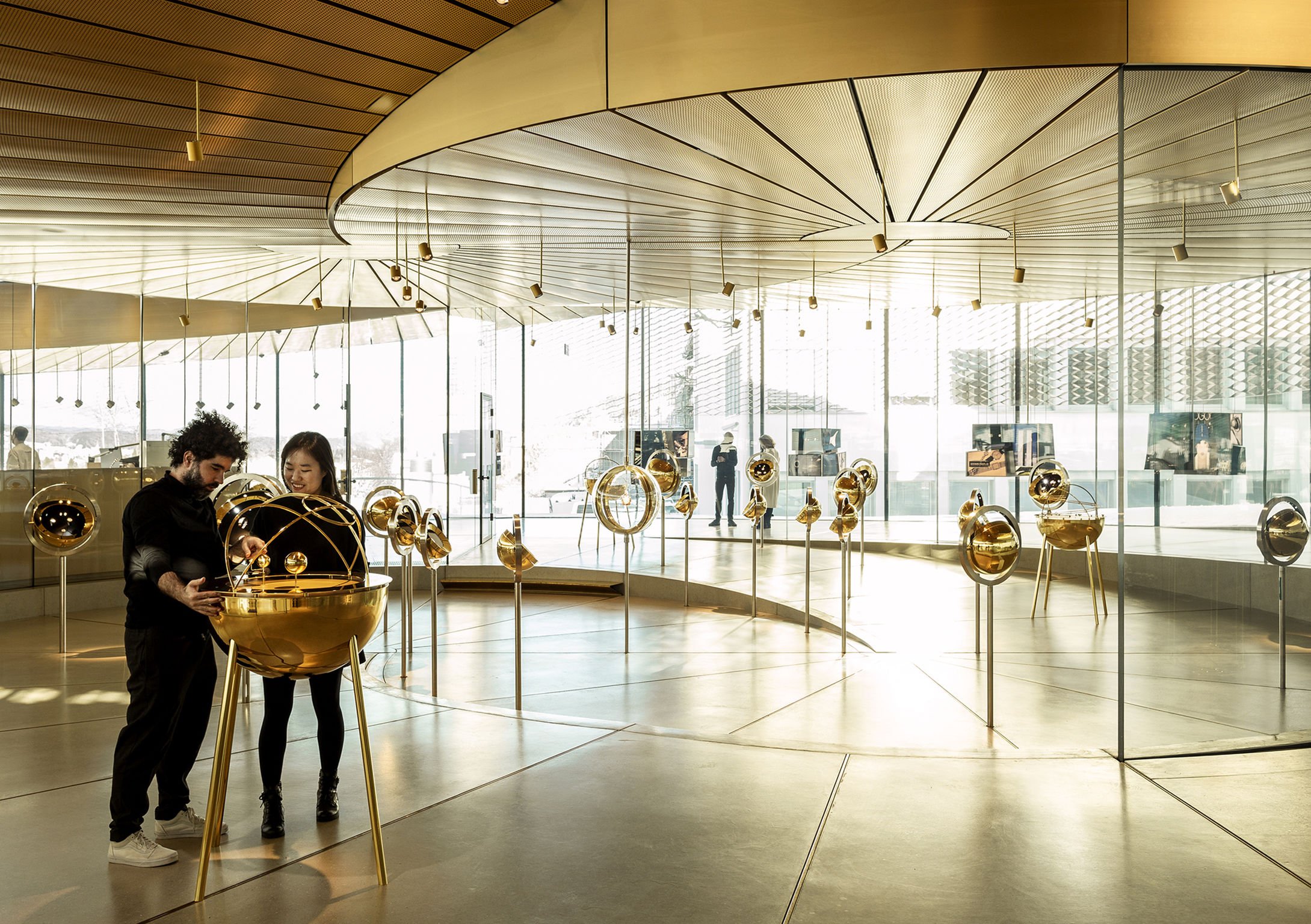 Space is employed poetically, replicating the exacting mechanisms that take place inside a watch of the Swiss Horlogerie. Various mechanical sculptures, automata and kinetic structures attract the visitor’s eye, but the crux of the experience lies in its immersive nature. Visitors travel through the building as they would through a watch’s spring. The museum houses some 300 watches, each with more complications than the last — through the exhibit, visitors are submerged in the ancestral savoir-faire of watchmaking. 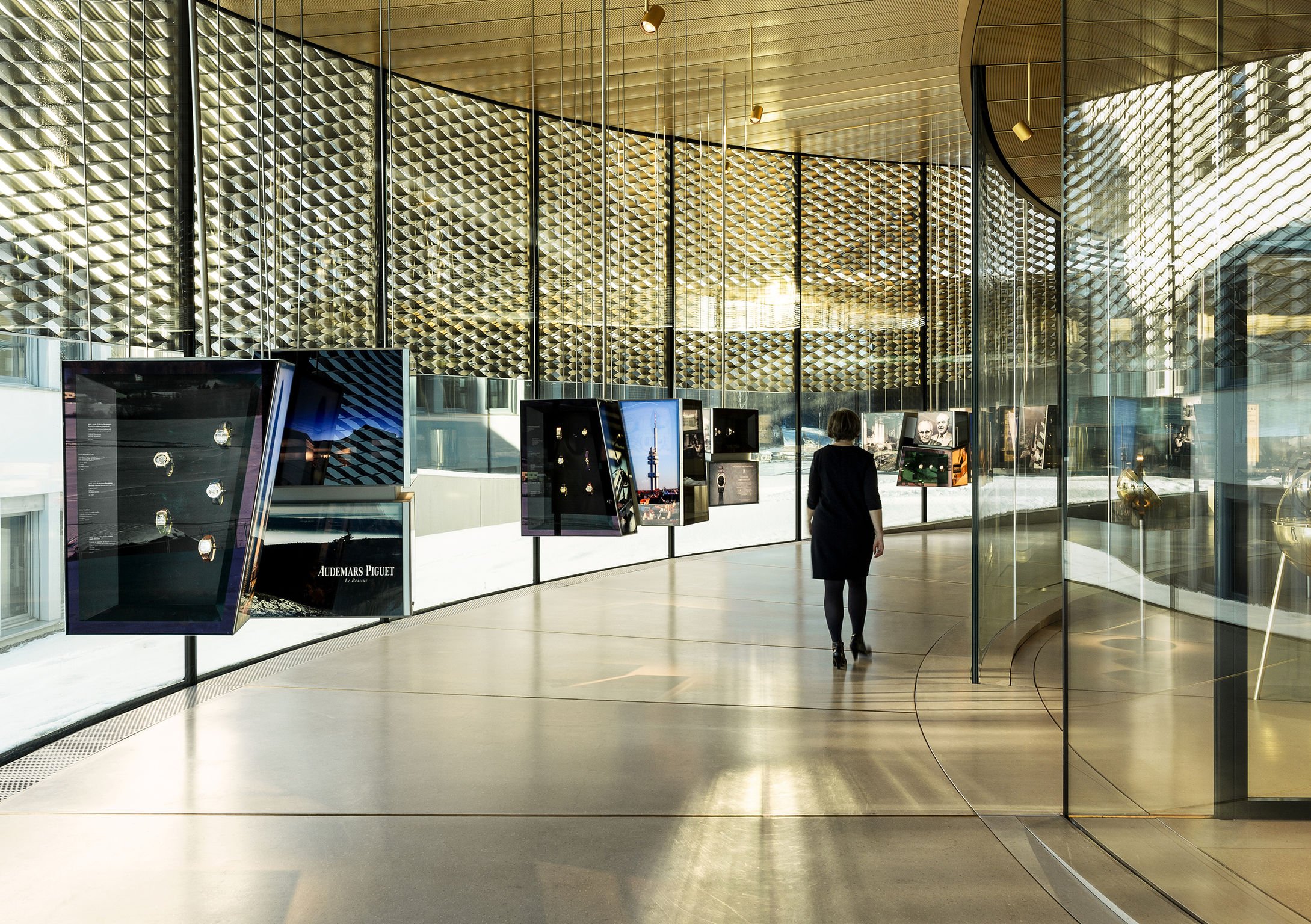 Fashioned by To Three Design, a flowing river of light (fittingly titled The Light River) adorns the Tianjin Meijiang Culture and Art Gallery, attached to a 50-metre glass wall. Modeled after the Haihe river, which connects the city of Tianjin, in Hebei Province, to the sea, the LED light sculpture leads visitors into the gallery. 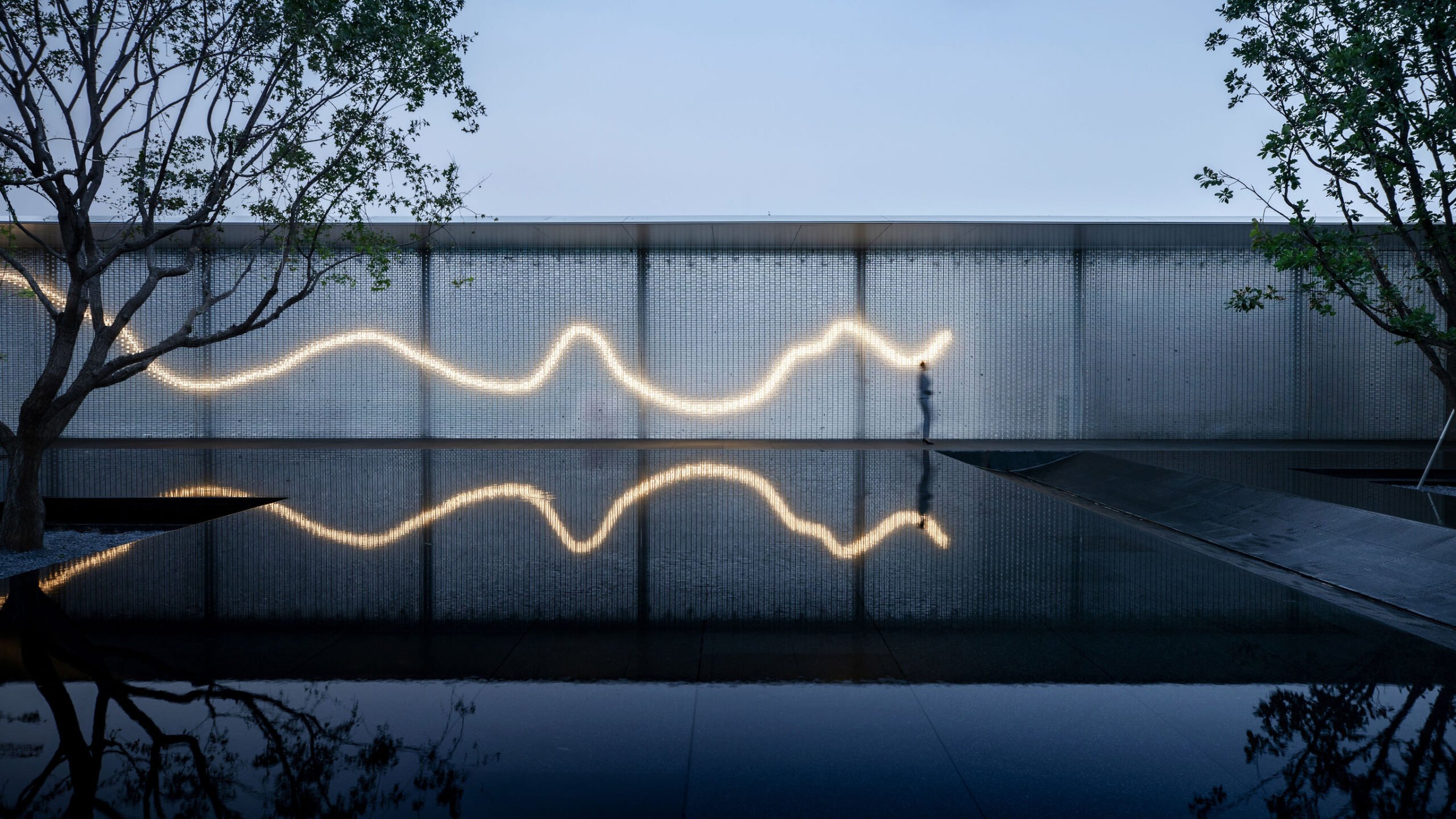 The city’s connection to water is an important feature of its history — born out of water transportation, it has been nicknamed “The Key Point of River and Sea.” Thoughtfully placed reflective surfaces, such as the glass panes behind it and the surrounding water feature bounce the sinuous light, creating an extremely bright environment right outside the museum. As an added detail, the sculpture can also be illuminated section by section, imitating the flow of water from river to sea. Connecting the indoor and outdoor spaces of the gallery, the Light River gently guides visitors to the beginning of their artistic journey. 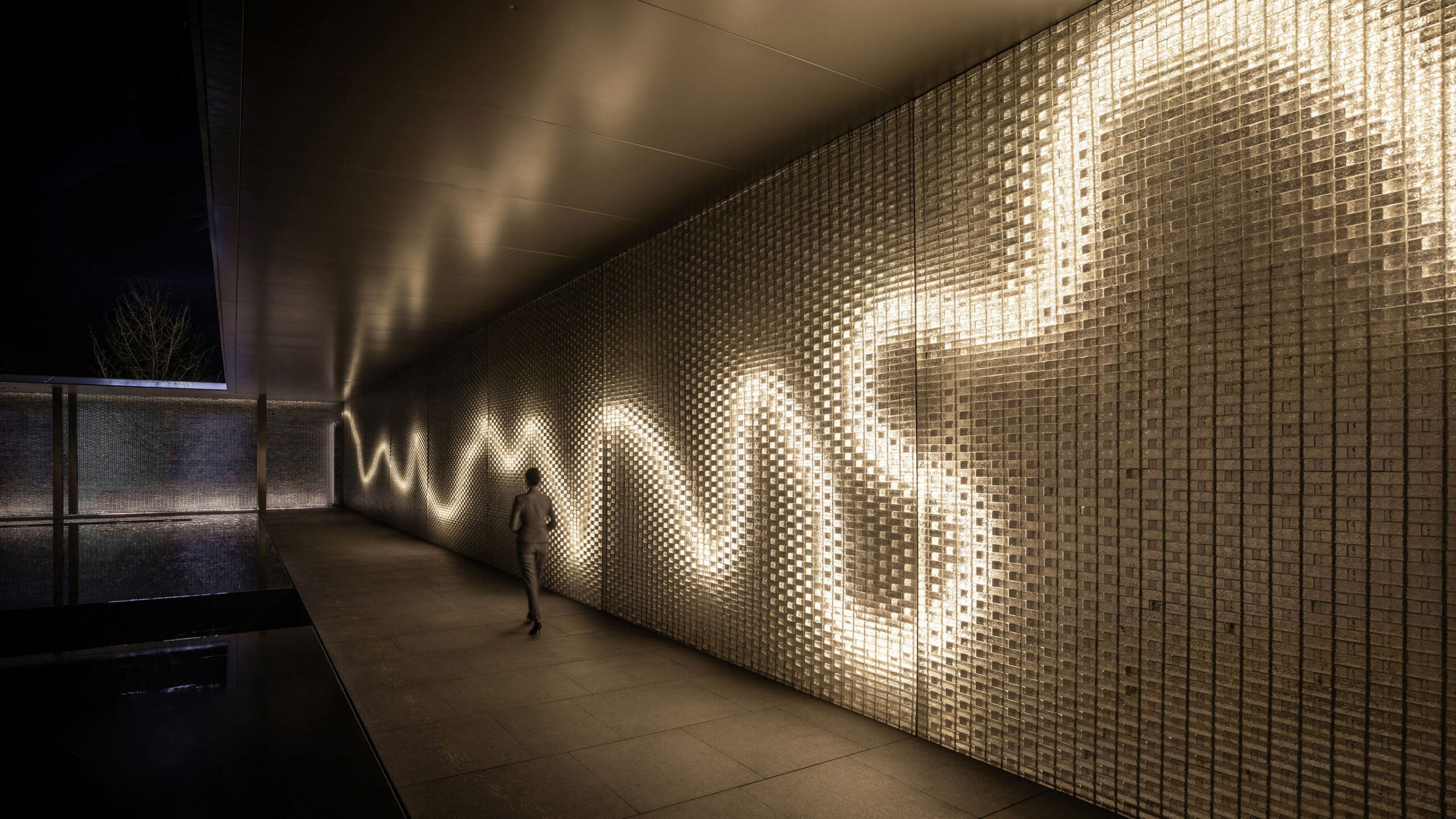 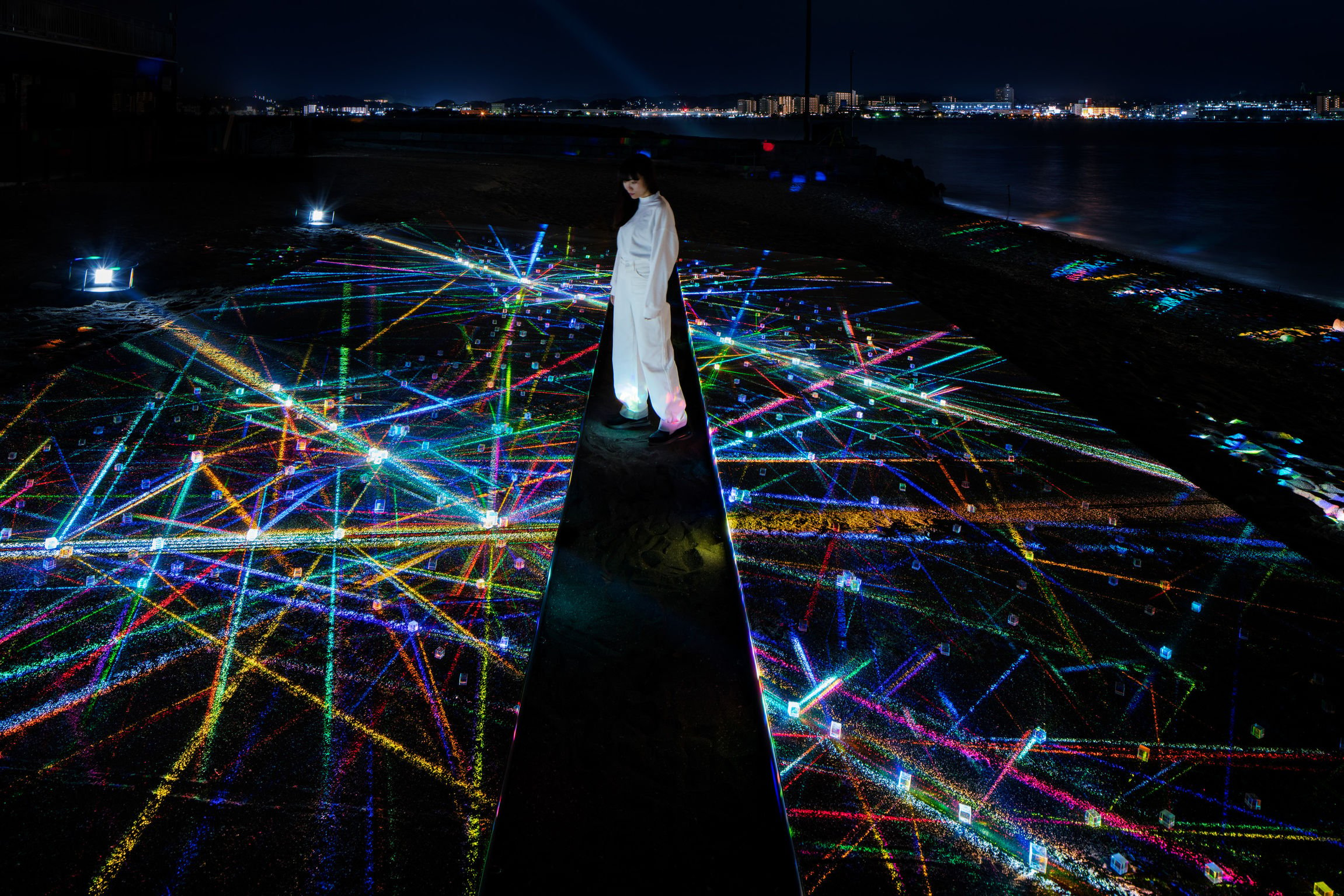 Sarushima Island is a small uninhabited Japanese reef, measuring only six hectares at its largest width. At the time of World War II, the island acted as a military base, and has since become derelict. Accessible only by ferry, Sarushima has long been “forgotten,” and few people found a reason to visit the site— until now. Inspired by the land’s rugged landscape and rich history, designer Takumi Takahashi of Japan’s Hakuten makes use of the ruined turrets that remain on the Island to craft his Prism installation. 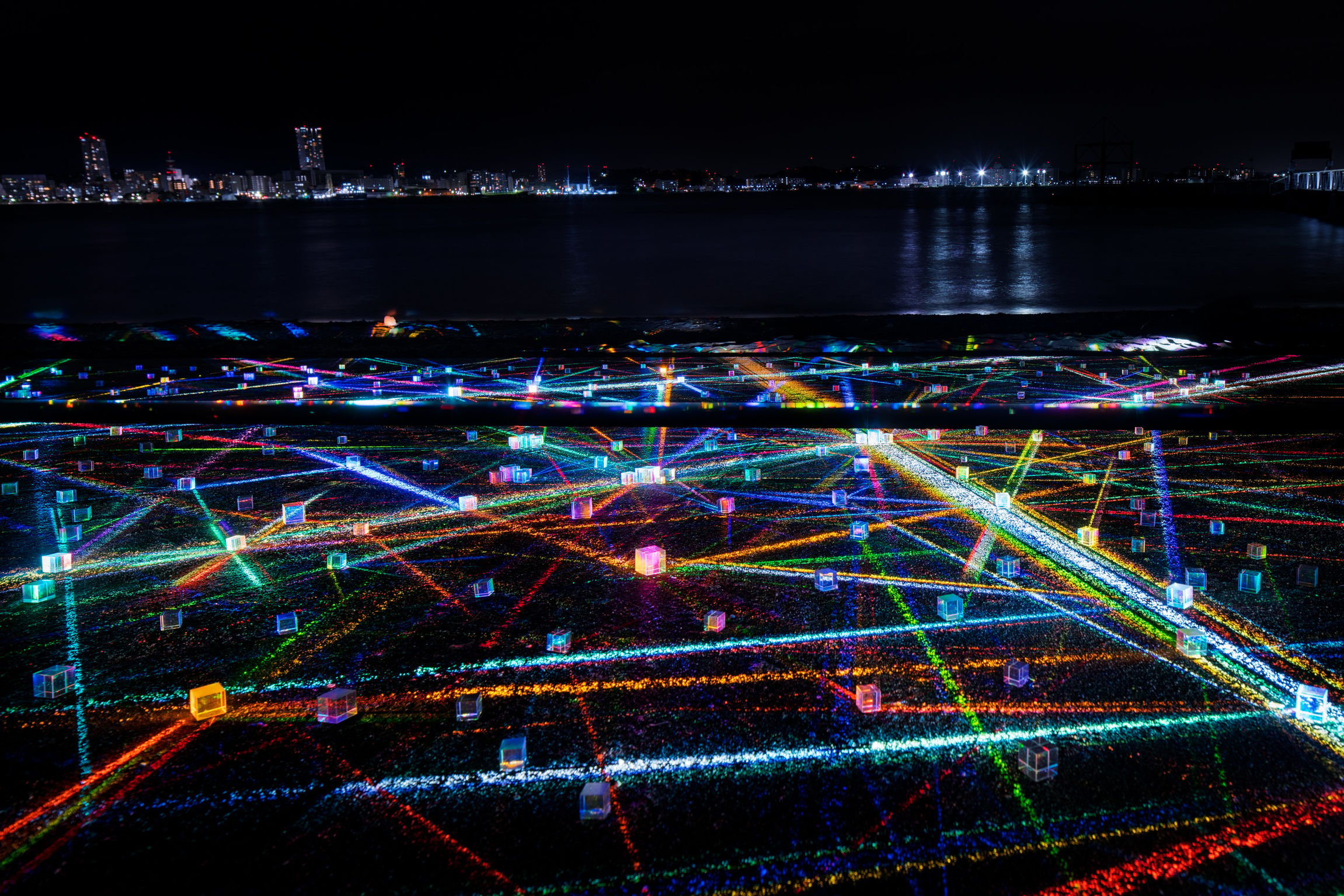 During the day, the exhibition looks unremarkable — in fact, the cubes are barely visible in the bright sunlight. At night, however, the multitude of tiny prisms are lit up by chromatic hues that map the island. Takahashi explains: “I drew a map on the beach, relying on the outline of the island and the location of the turrets.” It’s an unforgettable viewing experience — across the bay, the shimmering city lights of the city of Yokosuka echo the brightness of the Prism. 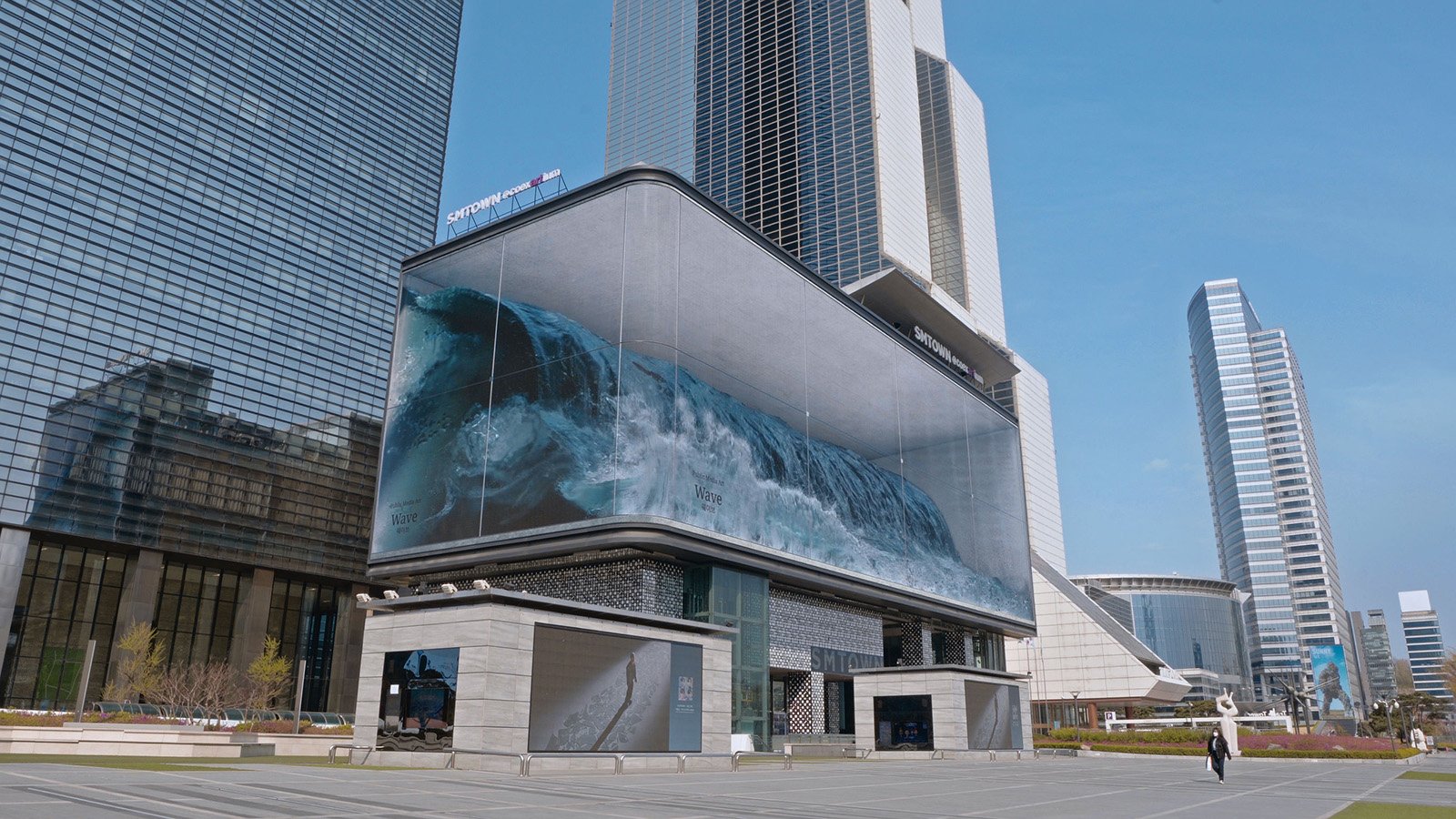 In the Gangnam neighbourhood of Seoul, pedestrians can walk by the world’s largest anamorphic illusion — Wave, a public art installation crafted by D’Strict, consists of a high-definition 180-degree screen projecting a massive wave crashing on loop. With a height of 20 metres and a width of almost 80, the lifelike numeric design is striking — and almost frightening to behold. 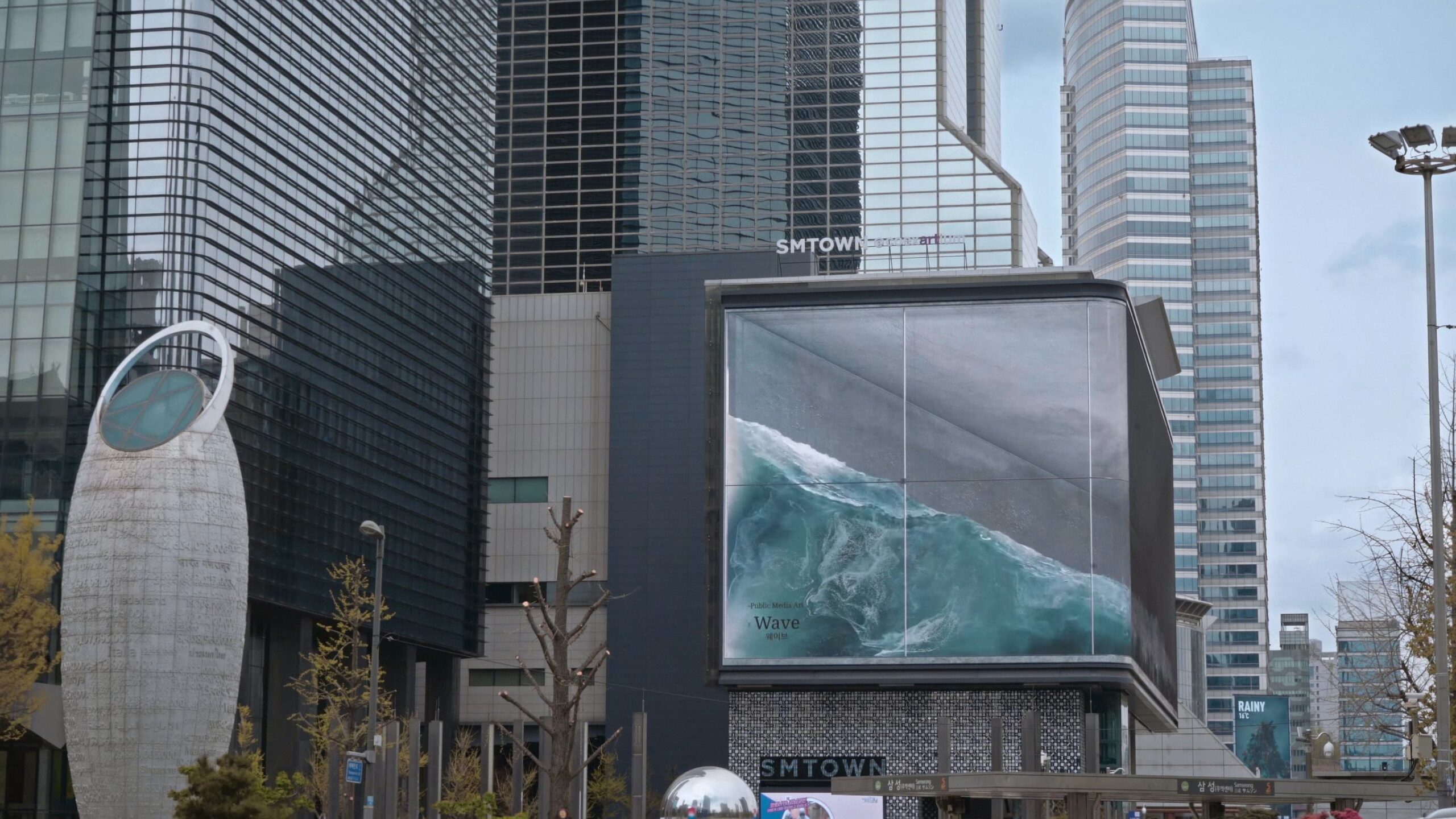 The placement of the “wave” in the centre of the Seoul’s bustling K-Pop Square is meant to bring attention to the city’s disconnect with nature — what would it mean for the urban core to engage with the natural world in a holistic manner? The LED billboard, which makes up the wave’s background, depicts a glass water tank to accentuate the dramatic effect. In a time where visiting museums is contentious (or forbidden), the hyper realistic illusion can mercifully be appreciated from afar — and outdoors. 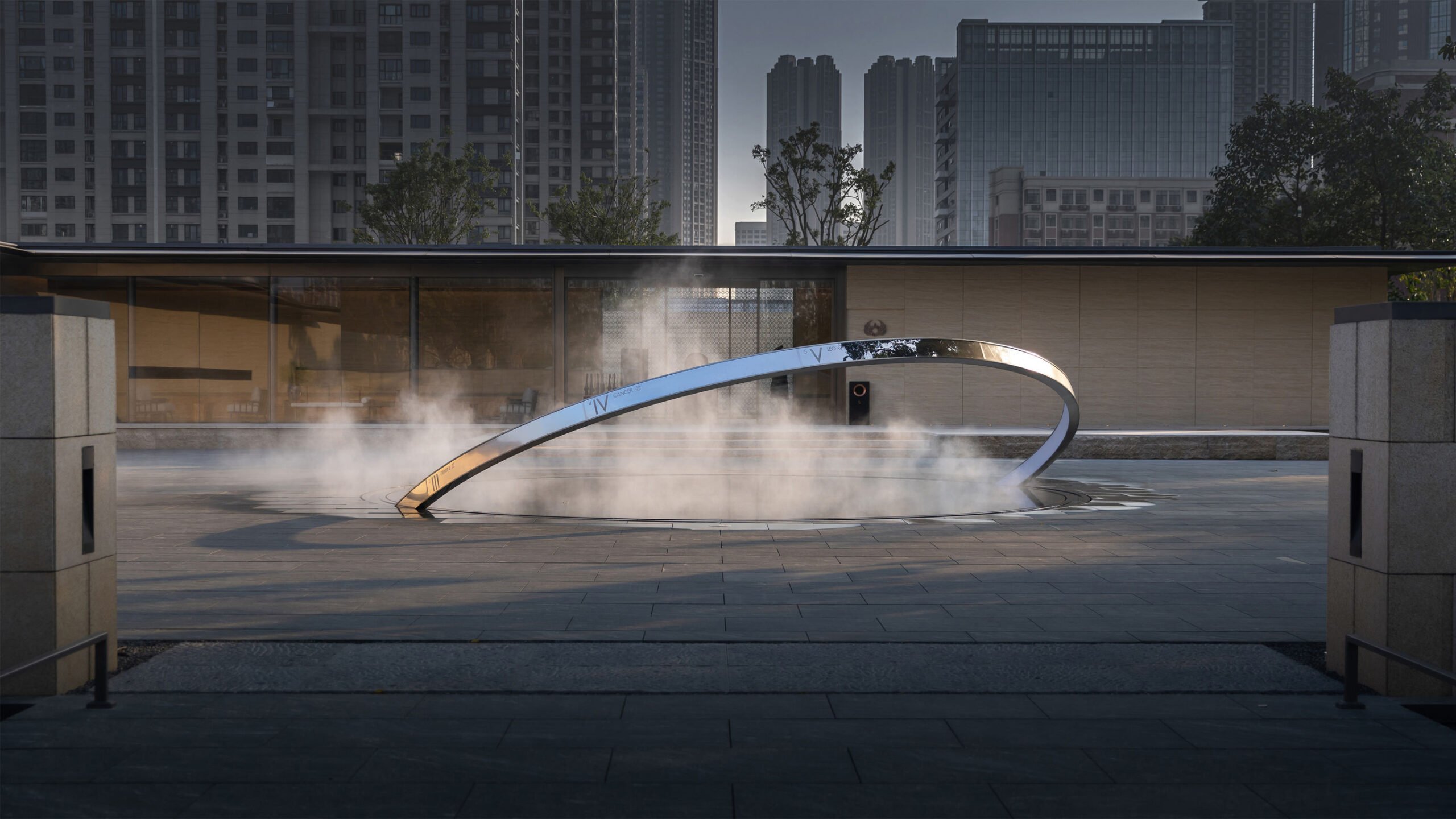 In the city of Foshan, China, an oversized clock makes its home in a public square. Located in the Tropic of Cancer, the most northernly circle of Earth’s latitude, the Time Loop is giant time measurement device which takes the form of an oversized metal ring inclined at an angle of 23.5 degrees, rotating every hour. Created by ToThree Design, the question at the centre of the installation is deceptively simple: how do humans perceive time, and how are time and space connected to our environment? 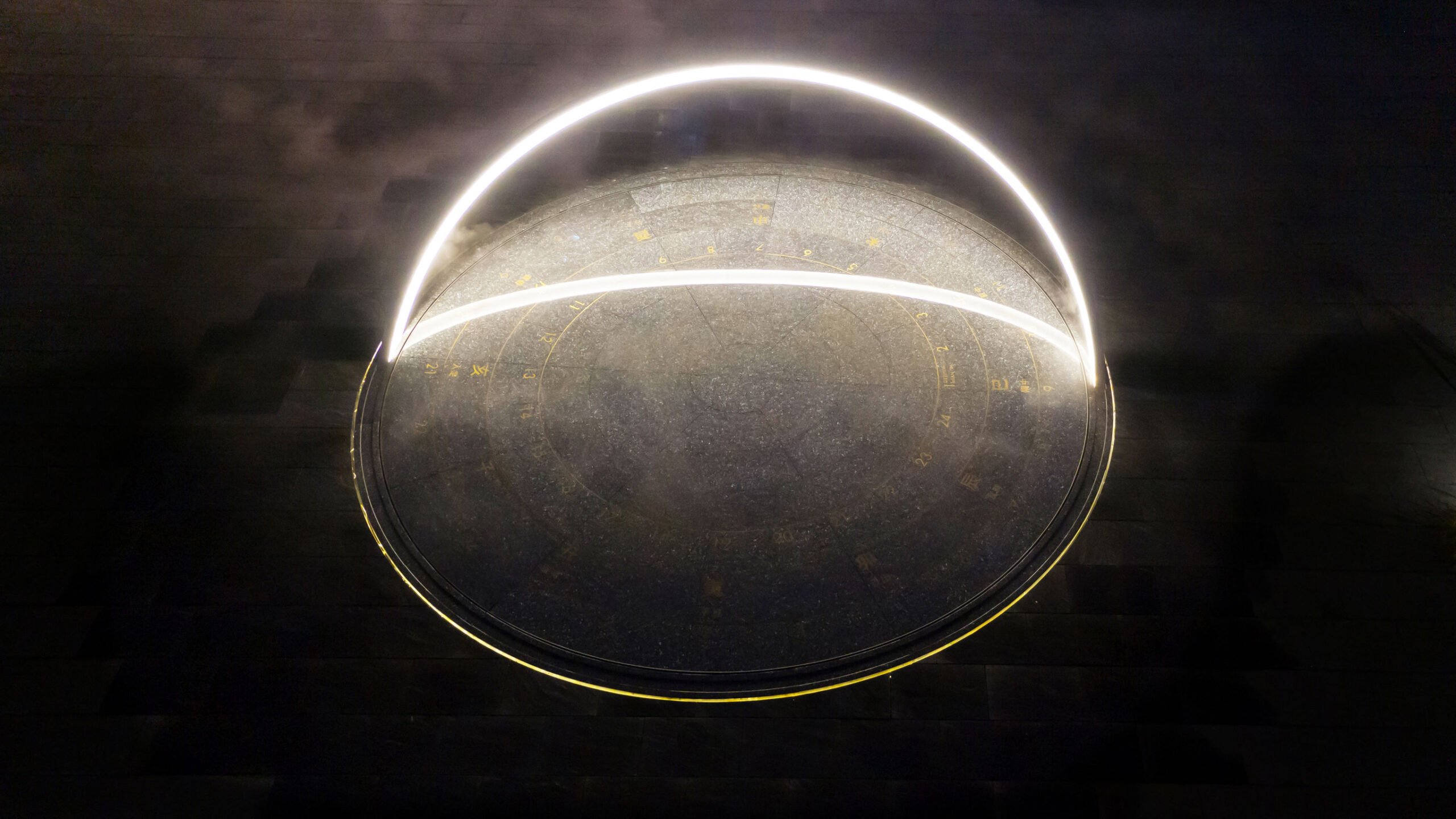 The rotating water surface, over which the ring is positioned, creates an eerie mist which accentuates the installation’s mystique. Engraved with the twelve constellations as well as three time measurement calibrations: GMT, UTC, and old Chinese time. Both serene and mysterious, the public exhibit is a reminder of the subjective nature of time — now a permanent fixture of Foshan, it will be relocated to a city park in the near future. 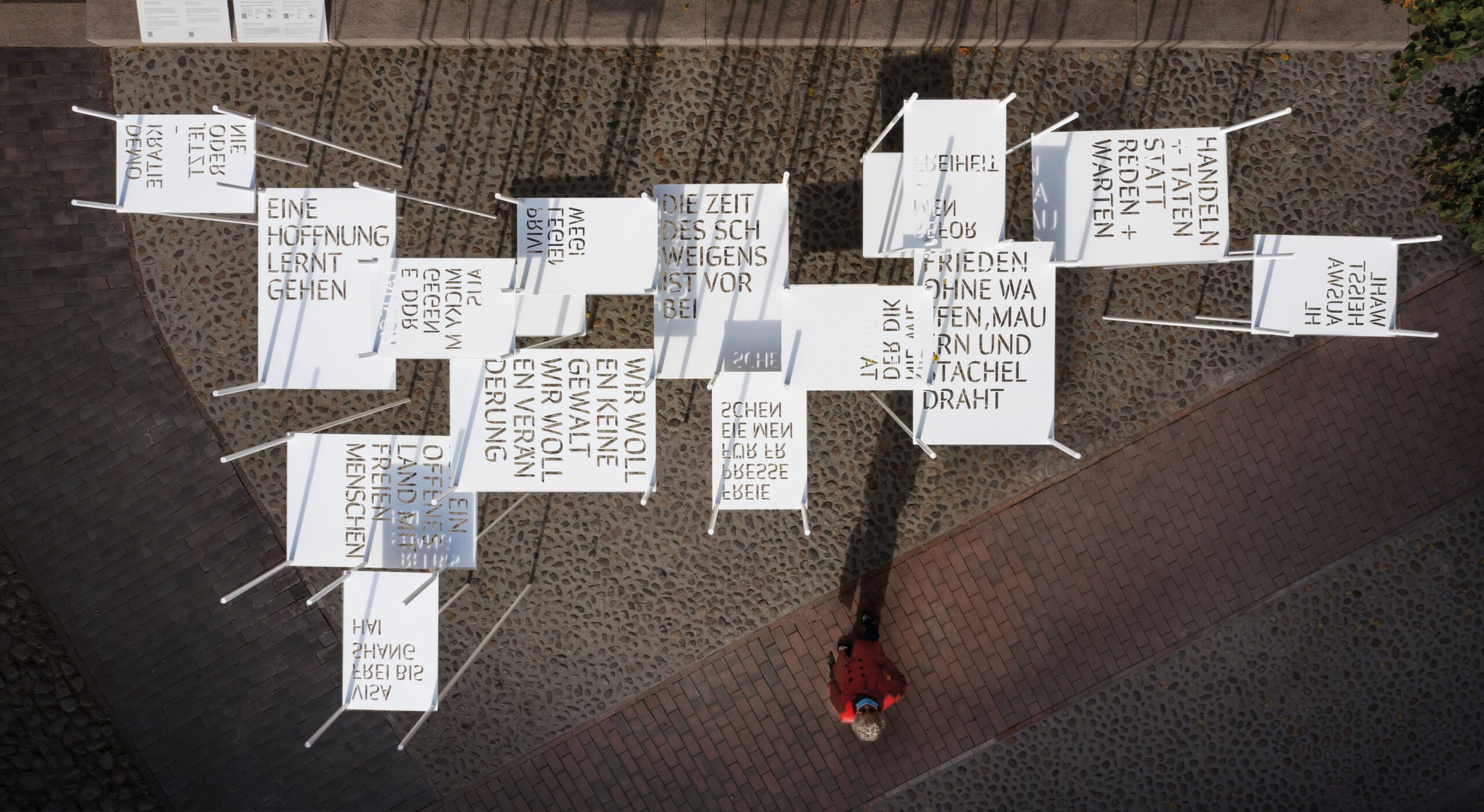 This memorial exhibition in Waren-Müritz recalls the events of Germany’s Peaceful Revolution in 1989, when East Germany’s borders opened up to the West. Referred to in German as Die Wende (“The Turning Point”), this period saw weekly small-scale protests happening across the country, in what were called “Monday Demonstrations.” The first such event consisted of a walk from the St. Georgen Church to the St. Marien Church, with around 400 people with candles in their hands documenting their will for peaceful change on that day. 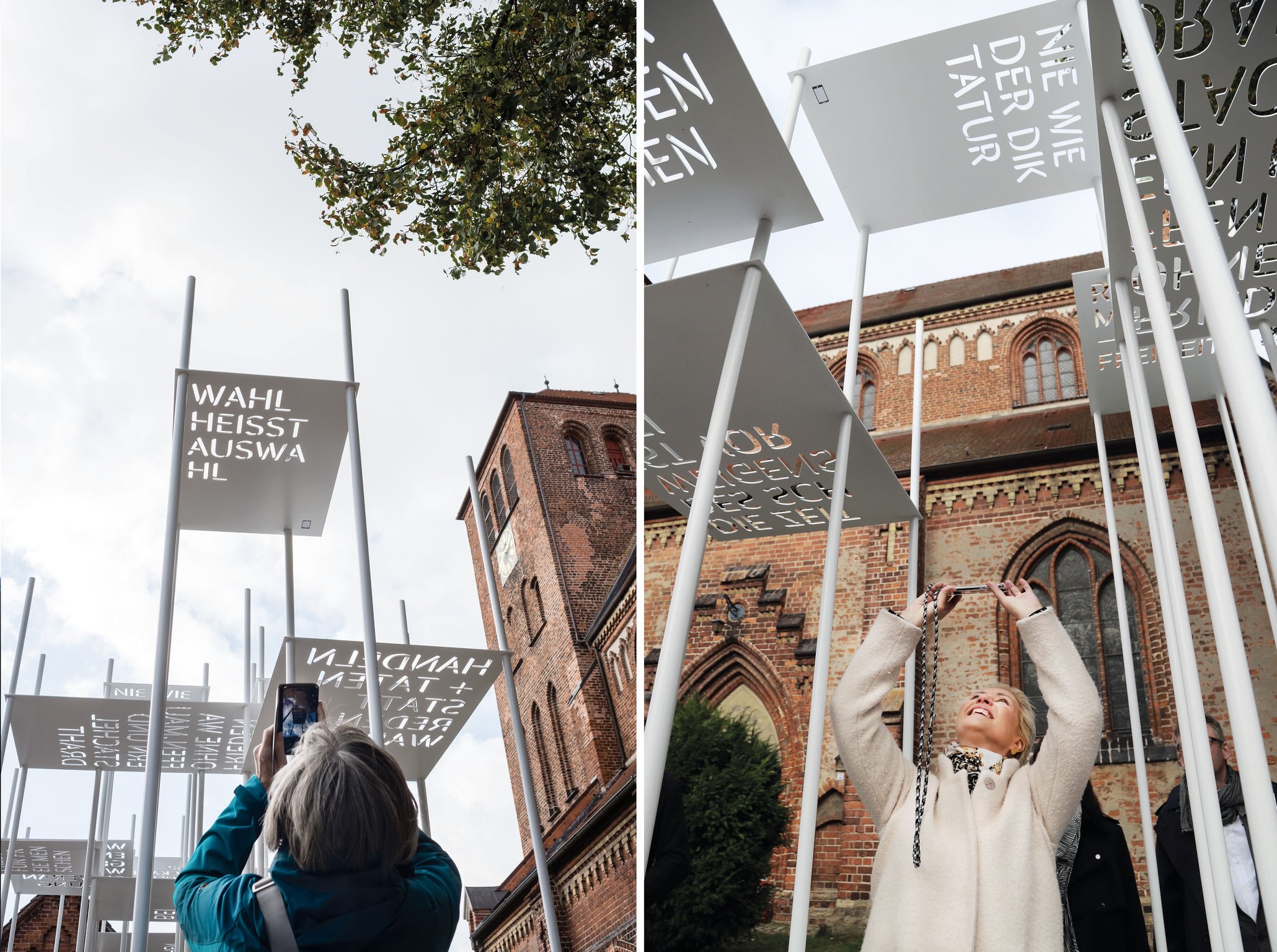 Thought up by artistic duo Dagmar Korintenberg and Wolf Kipper, this pavillion-like installation aims to make the slogans of the Die Wende visible again in public space, as a tangible reminder of Germany’s (recent) fraught history. Images of the protest in 1989 are made available via an Augmented Reality app, so that visitors can point their devices up to the laser-cut lettering in the sky and observe the archival images — and they can even add their own contemporary photographs to the mix.

This content was published by Azure on behalf of iF Design Guide.

These intriguing — and immersive — installations mine the hyper-local context.