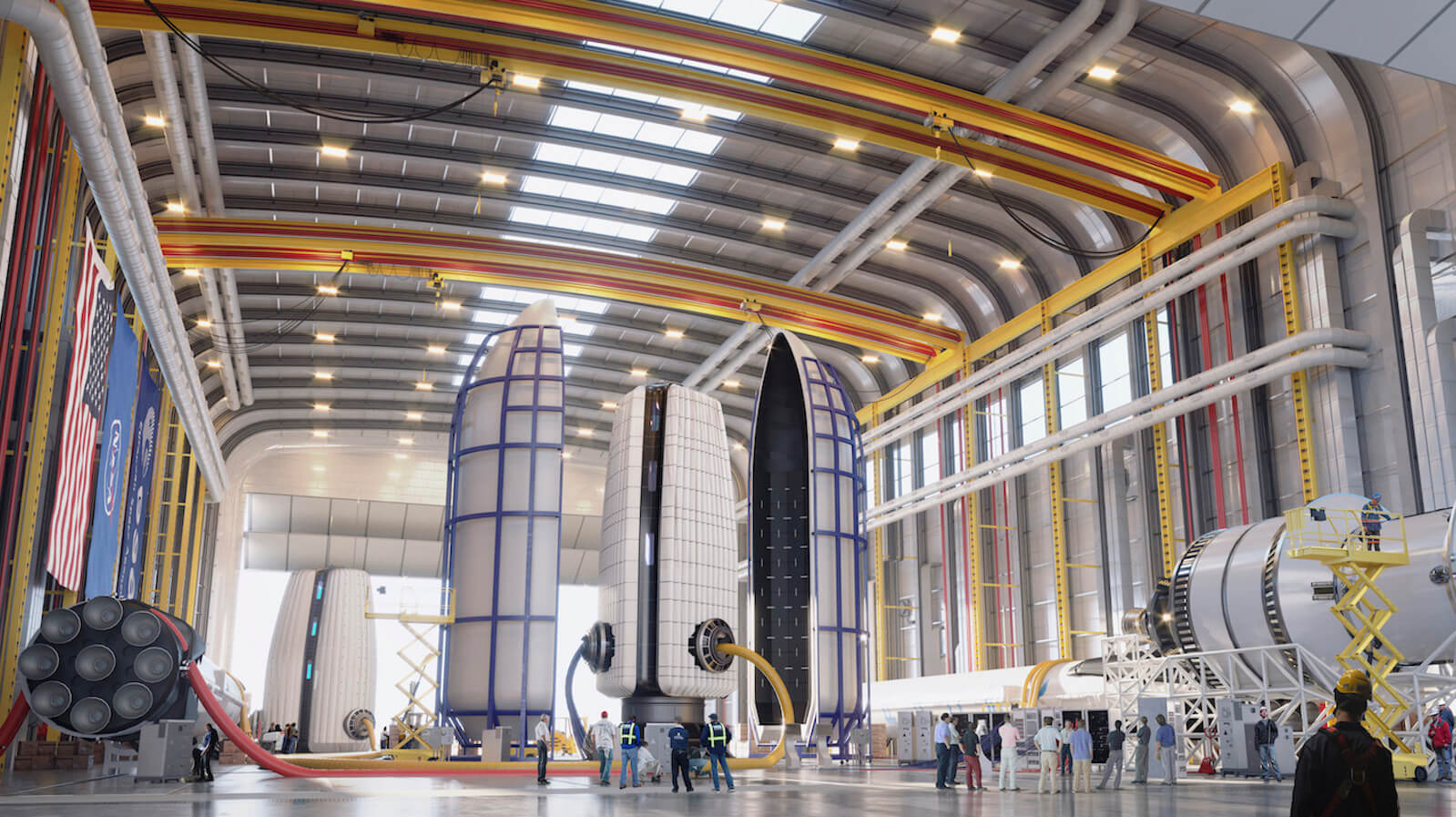 7 Highlights of the Venice Architecture Biennale 2021

From national pavilions grounded in the resilience of local communities to installations that speculate on our lunar future, architects around the world gather to ask and answer “How will we live together?”

As a rhetorical question, “How will we live together?” is more pressing than ever. Given the news on various fronts, it takes on the urgency of a plea. For the world’s most important architecture exhibition, the question is a mandate, a broad and all-encompassing challenge. On the occasion of the 17th International Architecture Exhibition – La Biennale di Venezia, architects are responding to curator Hashim Sarkis’s overarching theme in myriad ways and from various vantage points. As in past editions, no site is off limits: From traditional vernacular architecture and grassroots gathering places to new communities on the moon, the answers they provide show that architecture continues to speculate about what the future holds in every spatial context.

But the 2021 edition (on from May 22 to November 21) will be especially interesting. How will the participating teams, who have had their thought experiments delayed for a year, grapple with the shifting boundaries of their purview? How are they dealing with questions of how their work creates social cohesion and resilience — or stymies these goals? How are they expanding the parameters of the client brief — the client now encompassing the planet itself?

The main question leads to many more. And the physical scope of the show itself allows for a multitude of explorations. The Venice biennale comprises a central international exhibition featuring 112 participants from 46 countries; 61 national pavilions, including Canada, which is exhibiting Impostor Cities; and 17 collateral events. Just as important, the biennale includes a section called How will we play together?, a project by five international architects dedicated to children’s play, on display at Forte Marghera. Joy is definitely another worthy mandate. As is pure inspiration. Here are seven happenings at the Venice biennale that we’re excited about. 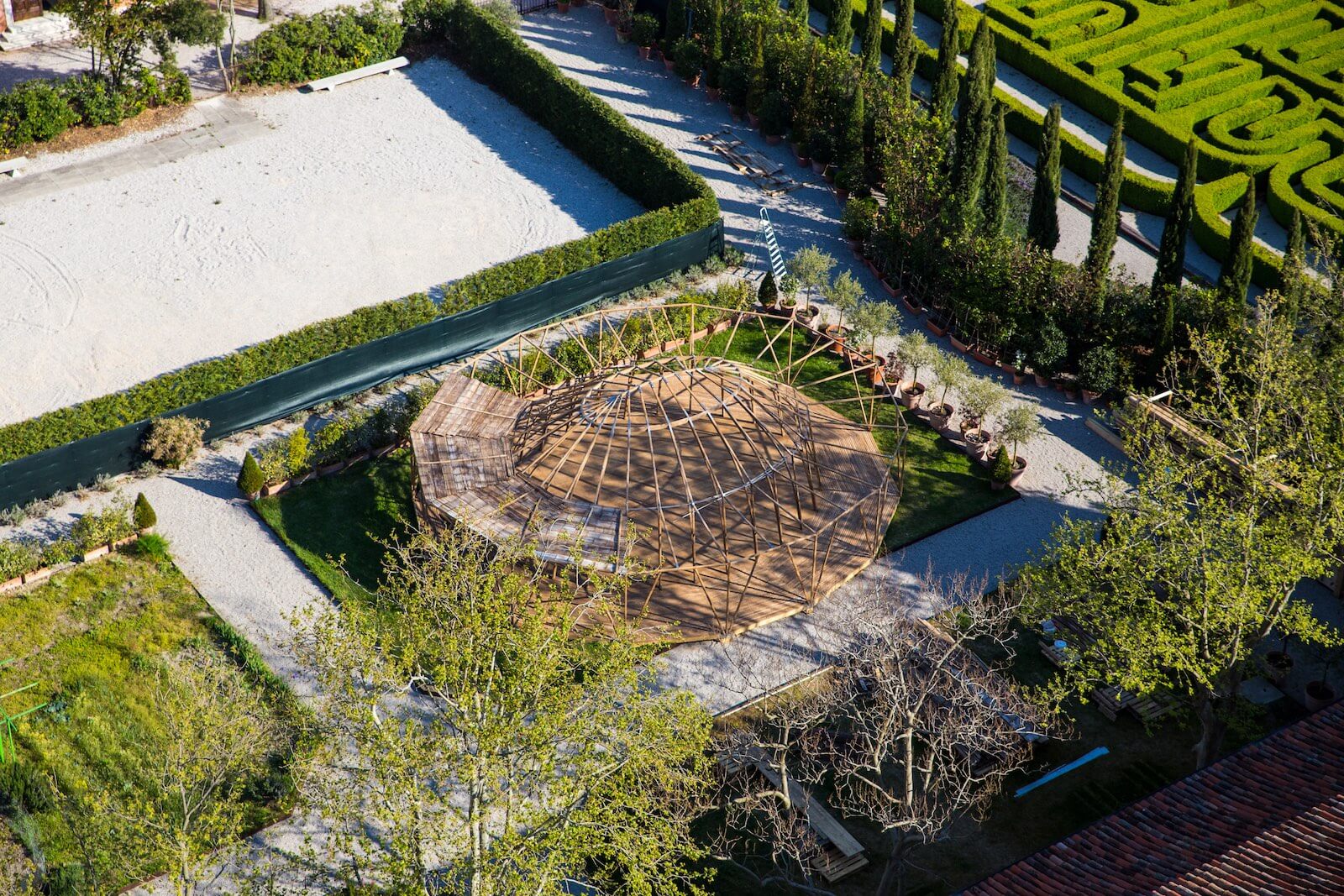 The Majlis under construction

A gathering place for programmed and impromptu talks, a beautiful bamboo Majlis has taken shape in the gardens of the Abbazia (Abbey) di San Giorgio, while the abbey itself will present an exhibition contextualizing the history of these unique structures. The enclosure is designed by Simón Vélez, a Colombian architect considered the world’s foremost innovator in bamboo, which he calls “vegetable steel,” and was constructed by local Venetian craftspeople. The majlis is wrapped in textiles handwoven by a women’s collective that includes members of the Boujad Tribe of Morocco. The entire project is presented by the Caravane Earth Foundation, which champions the preservation of vernacular architecture made with local materials in collaboration with the community. 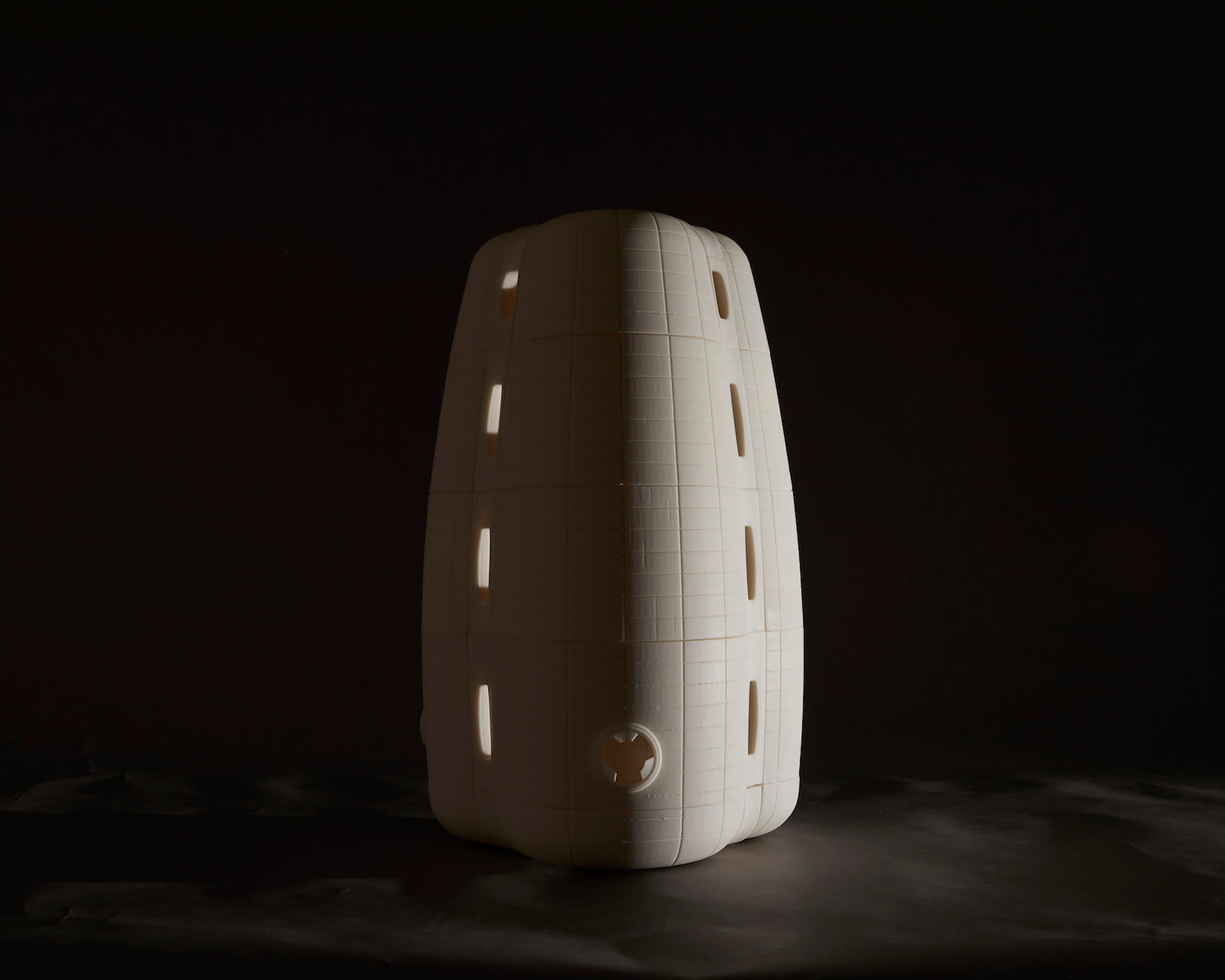 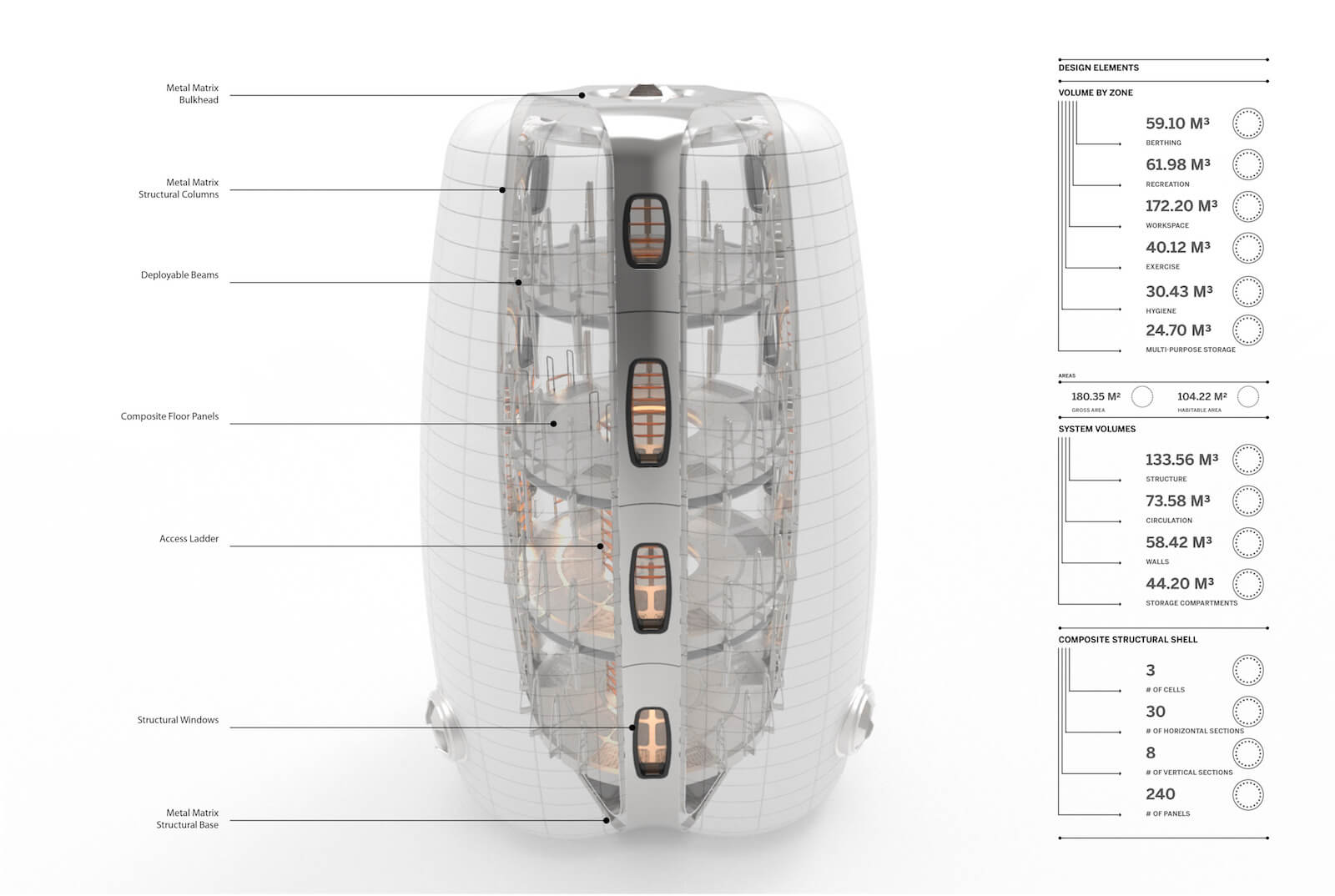 Skidmore, Owings & Merrill is one of a number of architecture firms anticipating a future human settlement on the moon. In an installation called “Life Beyond Earth,” located at the Corderie within the Arsenale, SOM has partnered with the European Space Agency to present its Moon Village. This “new type of space architecture” embraces the idea of a “sustainable ecosystem.” Two large-scale prototypes of habitat modules will be presented alongside a film that brings visitors to the surface of the moon.

3
Elasticofarm at the Italian Pavilion 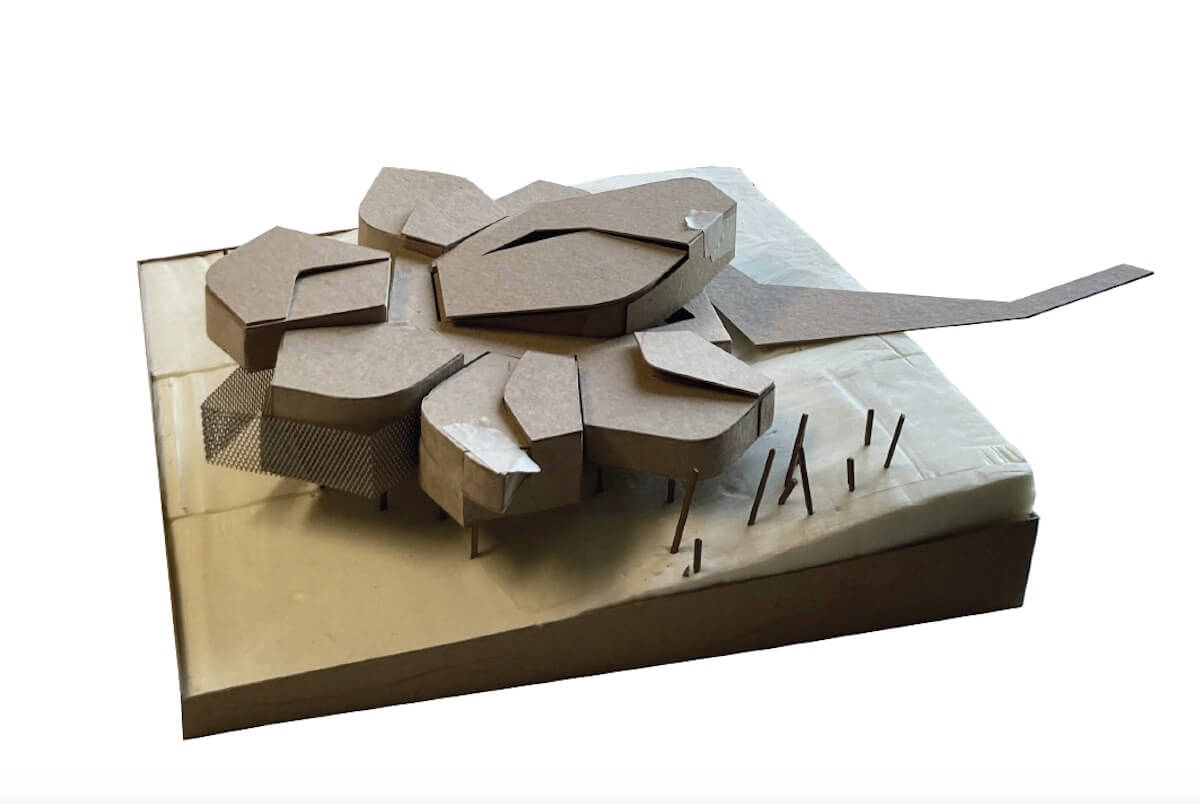 A model of the film school that Elasticofarm has designed for Manitoulin Island.

Part of the Italian pavilion’s “Resilient Communities” exhibition, architect Stefano Pujatti, whose firm, Elasticofarm, practices in Italy and Canada, will present a project grounded in the ongoing Reconciliation process in Canada. His proposal for a school on Ontario’s Manitoulin Island will take the shape of a turtle — North America is known as Turtle Island to many Indigenous Peoples — and house a program for film studies. Envisioned as a way to foster the talents of Indigenous students interested in the creative industry, the project is supported by the Weengushk Film Institute. 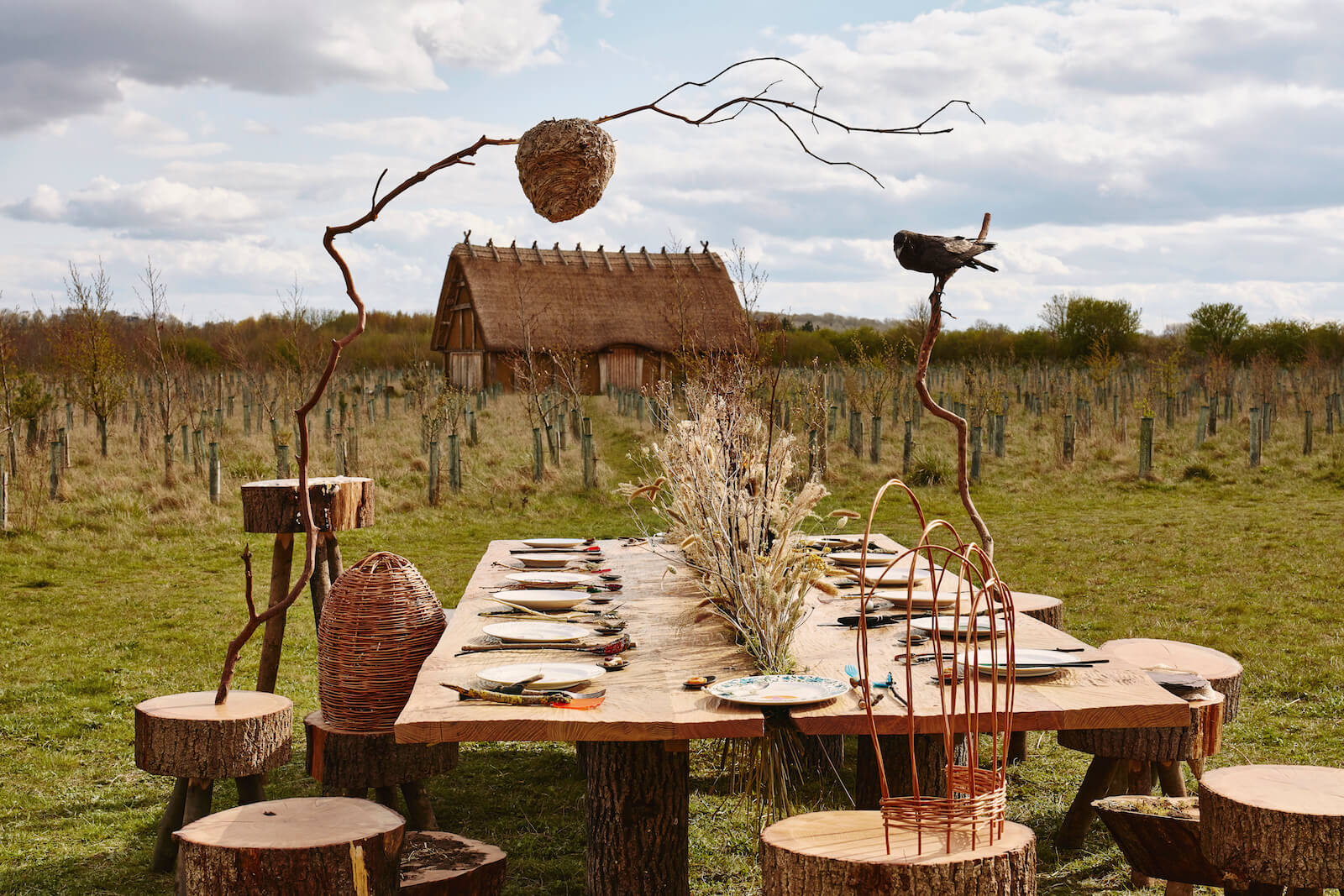 Species of the world unite. This image and opening photo by Mark Cocksedge

What will we do once climate catastrophe turns our landscapes into dystopias? Look on the bright side, seems to be the answer at this installation by Anglo-Indian studio Superflux. The multispecies dining experience considers “how all forms of life on earth might come together around the dinner table to celebrate their ecological interdependence in a post-Anthropocene world — a symbolic home where all species can prosper with resilience, adaptation, and hope.” At a rustic central table, and under an LCD triptych display of a flooded Earth overtaken by nature, wildlife large and small (in imagery, mostly) will join a trio of humans for a wondrous meal. Set with imaginative twig-hewn utensils, the scene is choreographed under the arches of the Arsenale and complemented by a sister installation called Invocation For Hope. 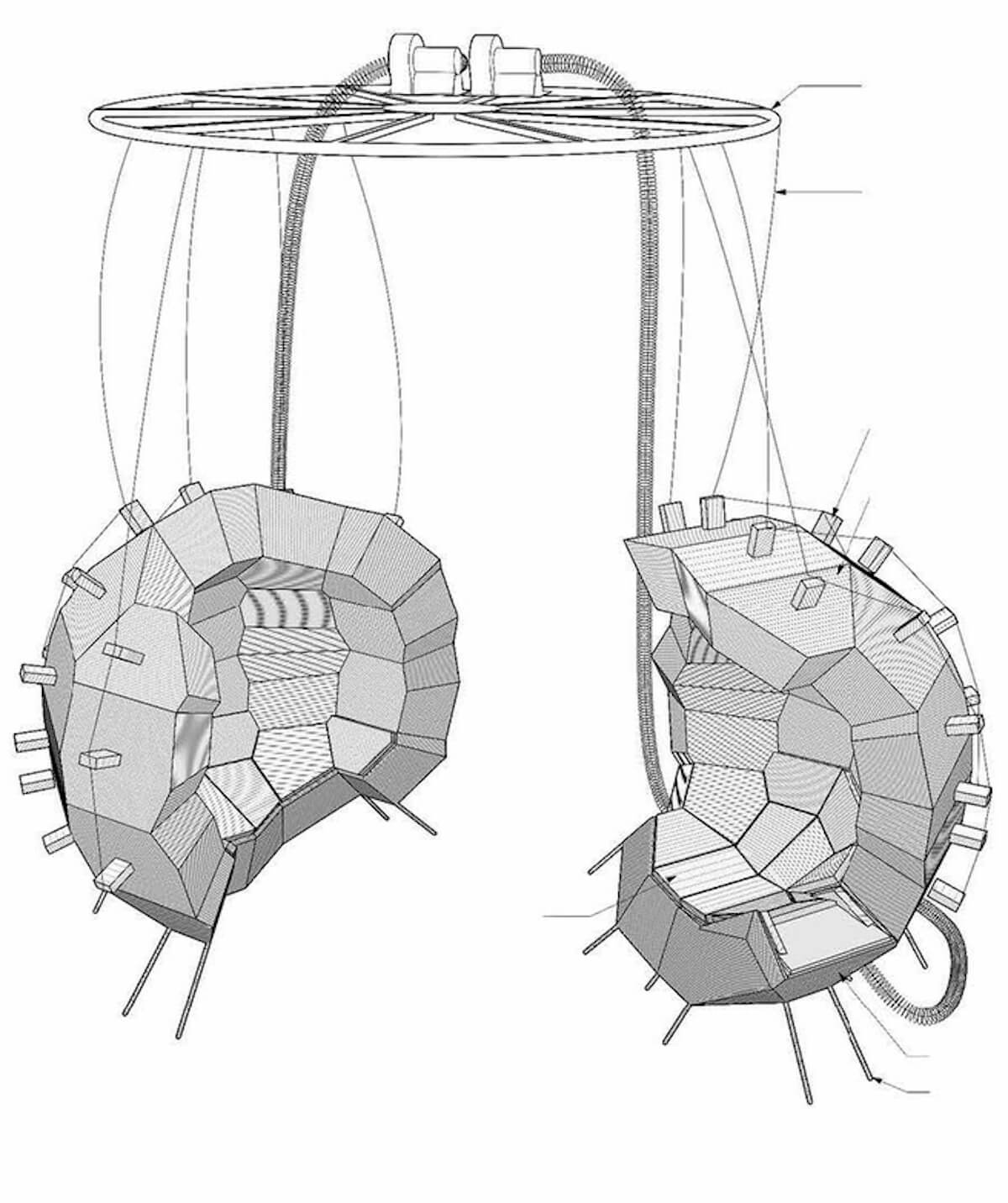 Buckminster Fuller’s legacy lives on. Geoscope 2, a split-sphere, multi-media installation, will showcase over a dozen participants, ranging from Pritzker Prize laureate Kazuyo Sejima to ecologist-philosopher Timothy Morton, who are reimagining the legendary American architect’s original geoscopes. Visitors to the installation, which is at the Central Pavilion in the Giardini, will be “enveloped in a panoramic multimedia experience projected over 42 individual faces” that “generates a complex, kaleidoscopic ecosystem, a tableaux of world-thinking on the edge.” 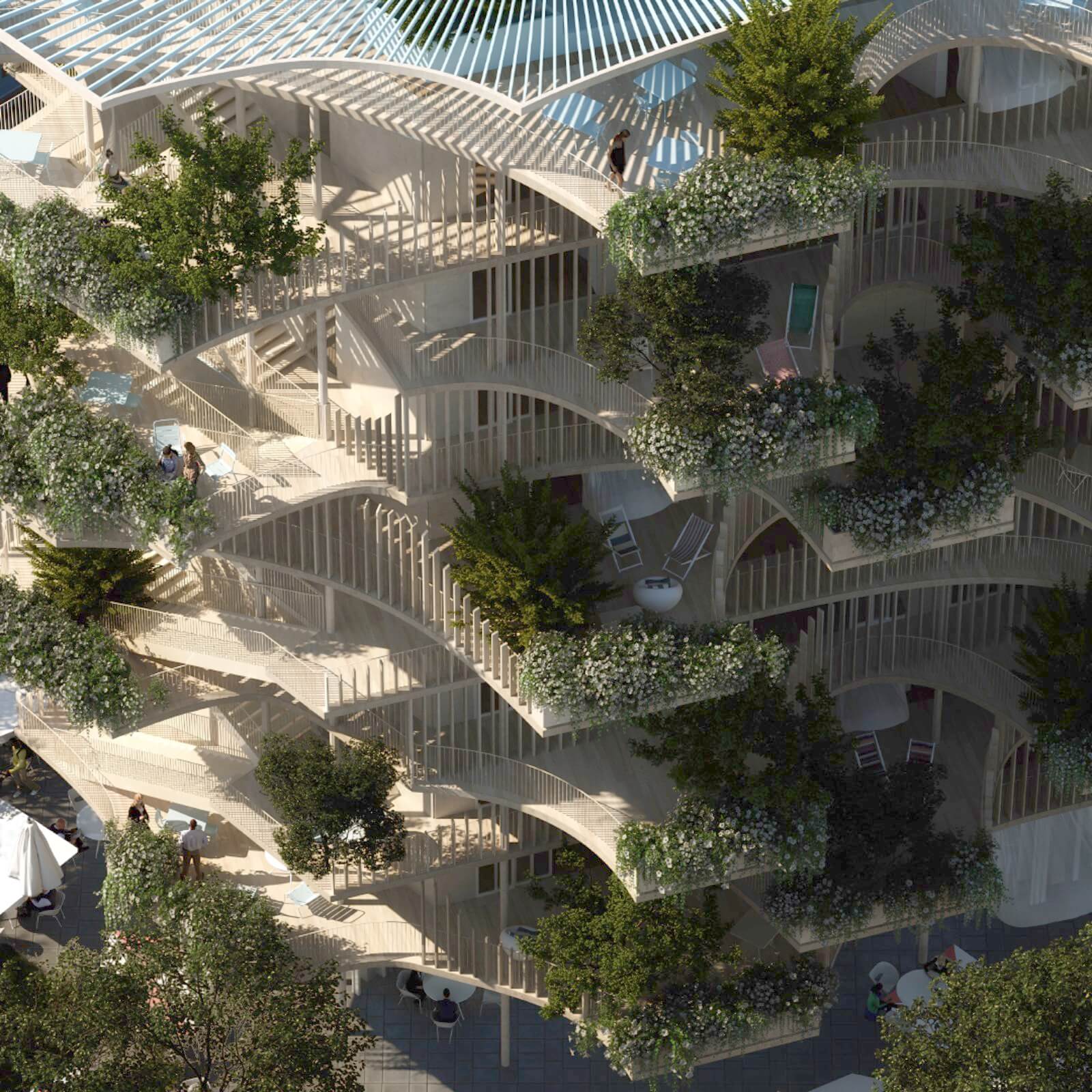 How will the urban tower adapt? The question is as loaded as the typology itself, which has long been presented as the panacea for everything that ails the city, from sprawl to climate change. French architect Nicolas Laisné, presenting at the Corderie dell’Arsenale, will show off his One Open Tower model. The five-metre-high sculpture represents his firm’s design manifesto “in which a new generation of buildings — open, generous, integrated, innovative in the use of space — explore new ways and practices of ‘living together’: the chosen proximity.” It will be interesting to see how his model encapsulates all the current trends around towers and the thinking that guides their future, which is often predicated on a live-work-balanced, plant-life embracing, 15-minute-city ethos. 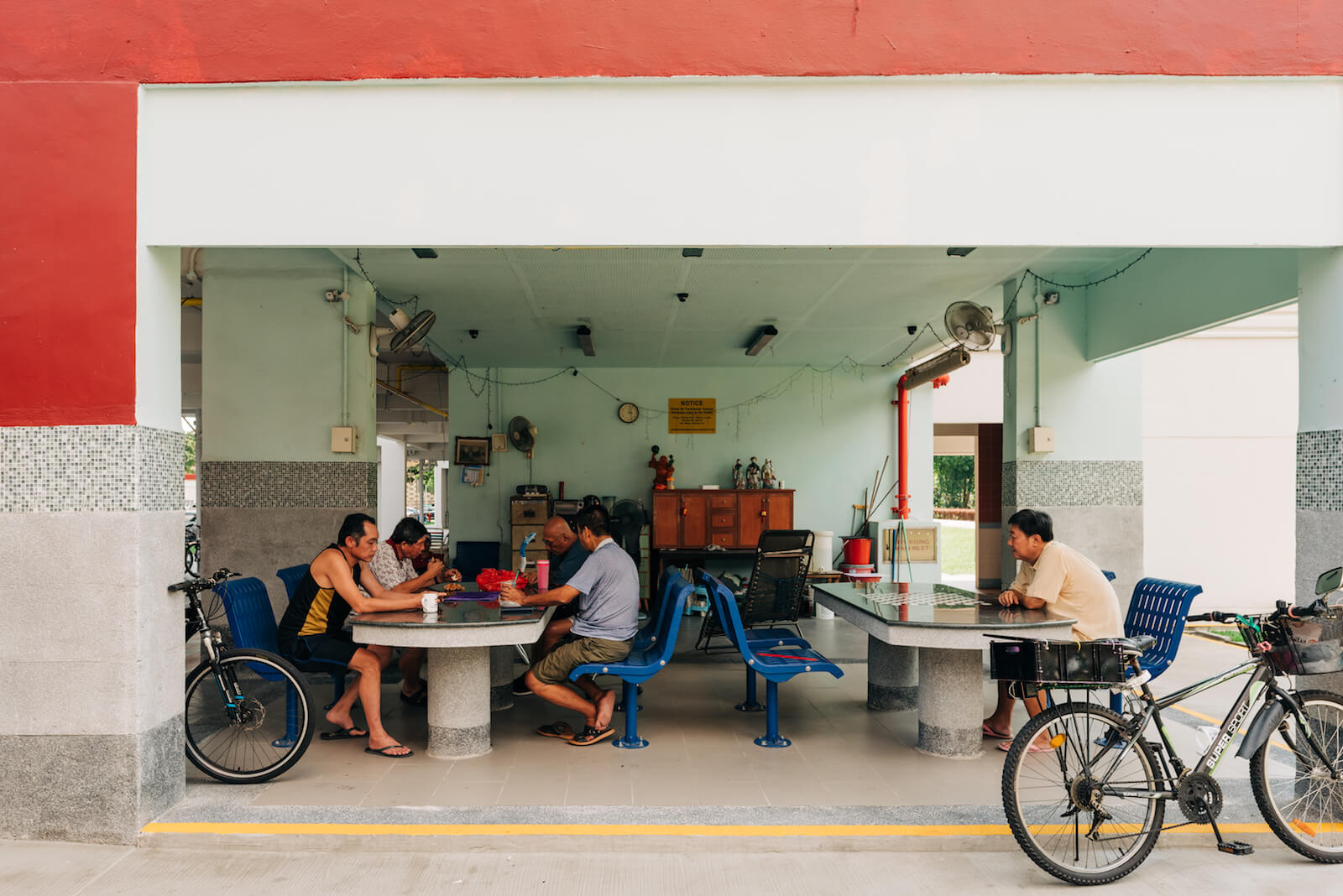 A void deck in Singapore. Photography by Open Narrative

The majority of Singapore’s population lives in public housing. This means that the creation of ambidextrous shared public space is a calling card for the island city state, which has become expert in creating gathering points such as hawker centres (food courts), void decks (open spaces below housing apartments in Singapore), and sky gardens. For “The Architecture of Relationships,” 16 built and speculative architecture, art and design projects by firms including Atelier HOKO, DP Architects, Lai Chee Kien, salad dressing and WOHA, examine these Singapore-specific places. There are lessons for other cities here, too, in how these spaces “can serve as catalysts in forming relationships, improving the quality of the built environment and forging new spatial contracts” – especially in the aftermath of COVID.

From national pavilions grounded in the resilience of local communities to installations that speculate on our lunar future, architects around the world gather to ask and answer “How will we live together?”