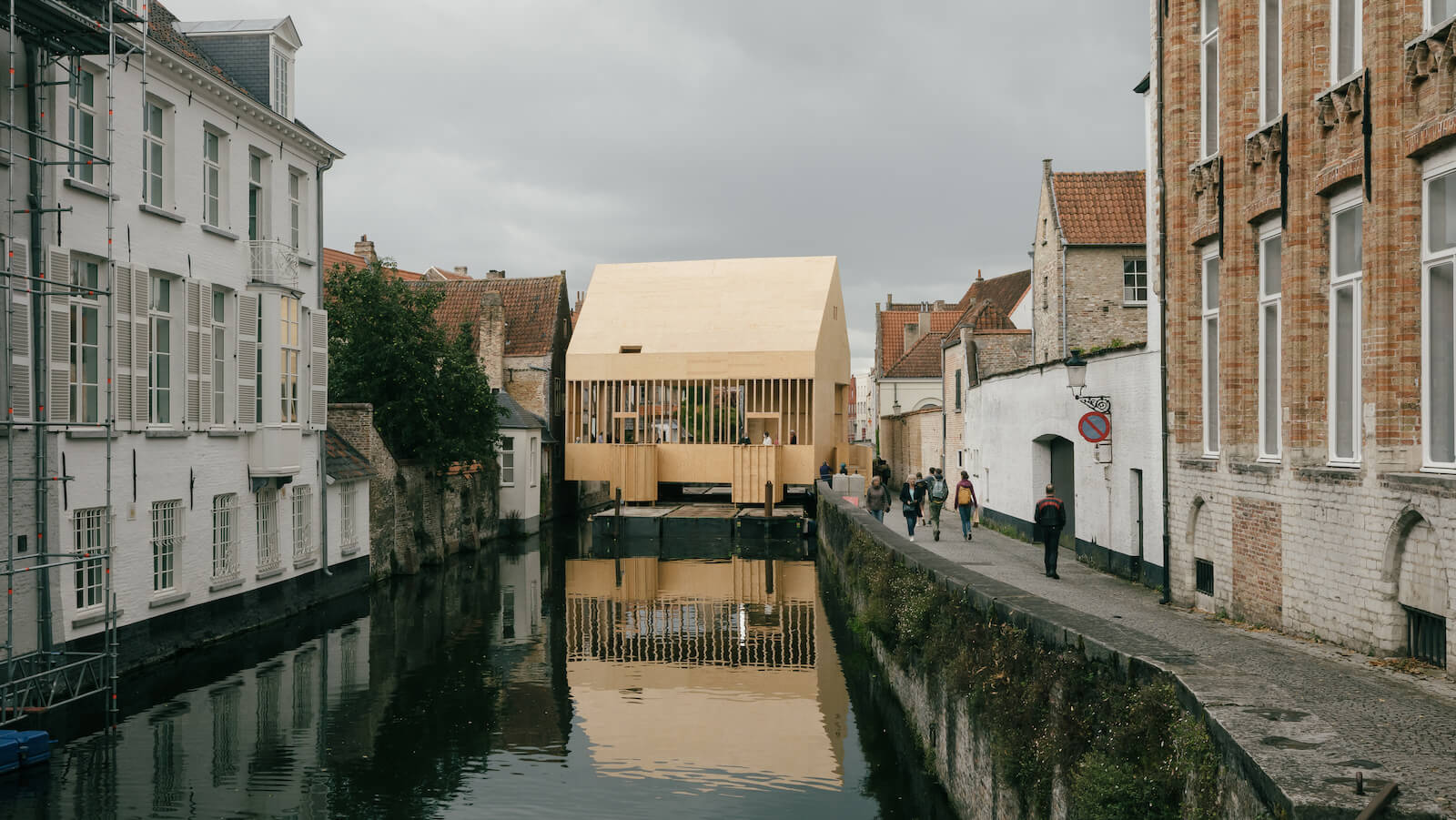 A Belgian Pavilion Stretches the Truth

A house divided – that’s the phrase that comes to mind when viewing the Brugge Diptych, a temporary pavilion created by Jon Lott / Para Project for the Belgian city’s 2021 Triennale. It served as a venue for talks and other live programming during the event (which ends this weekend) but will, thankfully, remain in place through late fall. 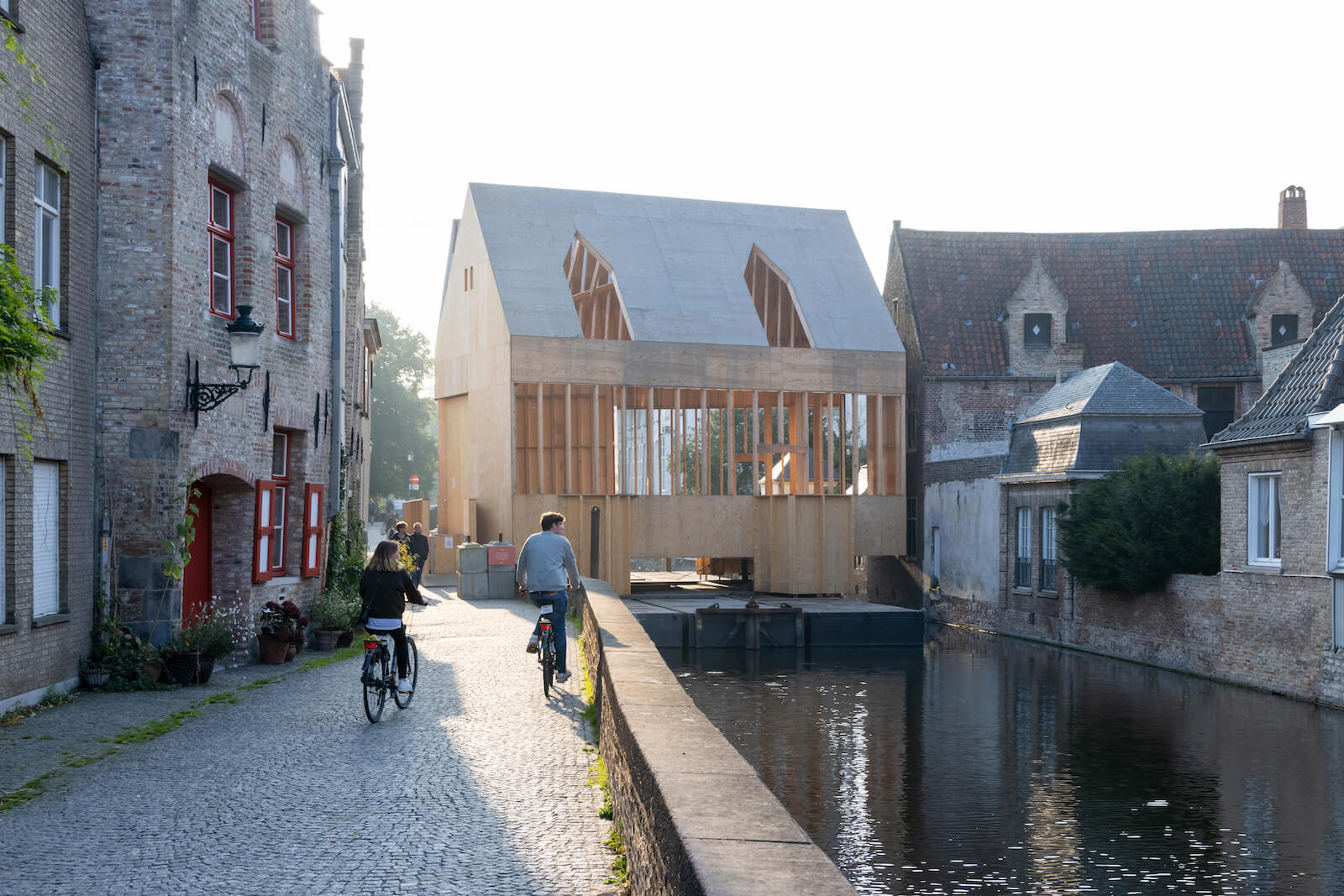 As a piece of modern architecture in dialogue with its traditional surroundings, it is an impressive and though-provoking feat. Floating on pontoons so as to not disturb the waterfront site, the pavilion abuts an abandoned 15th-century canal house. Built from blonde wood – as well as metal and mirror glass – it stands out from yet tucks itself into the surrounding scenery, resembling a pitched-roof abode from either side. Despite appearances, it is actually a diptych, pulled apart at its centre to present a double façade.

In gently joining a pre-existing site without encroaching on it, the project also speaks, although metaphorically, to the Triennale’s theme: TraumA. “Through estrangements of orientation, material, scale and posture, the pavilion attempts to recognize something of itself in its new neighbour,” the firm explains. “It seems that both have their trauma to work through. After all, architecture is felt before it is understood.” 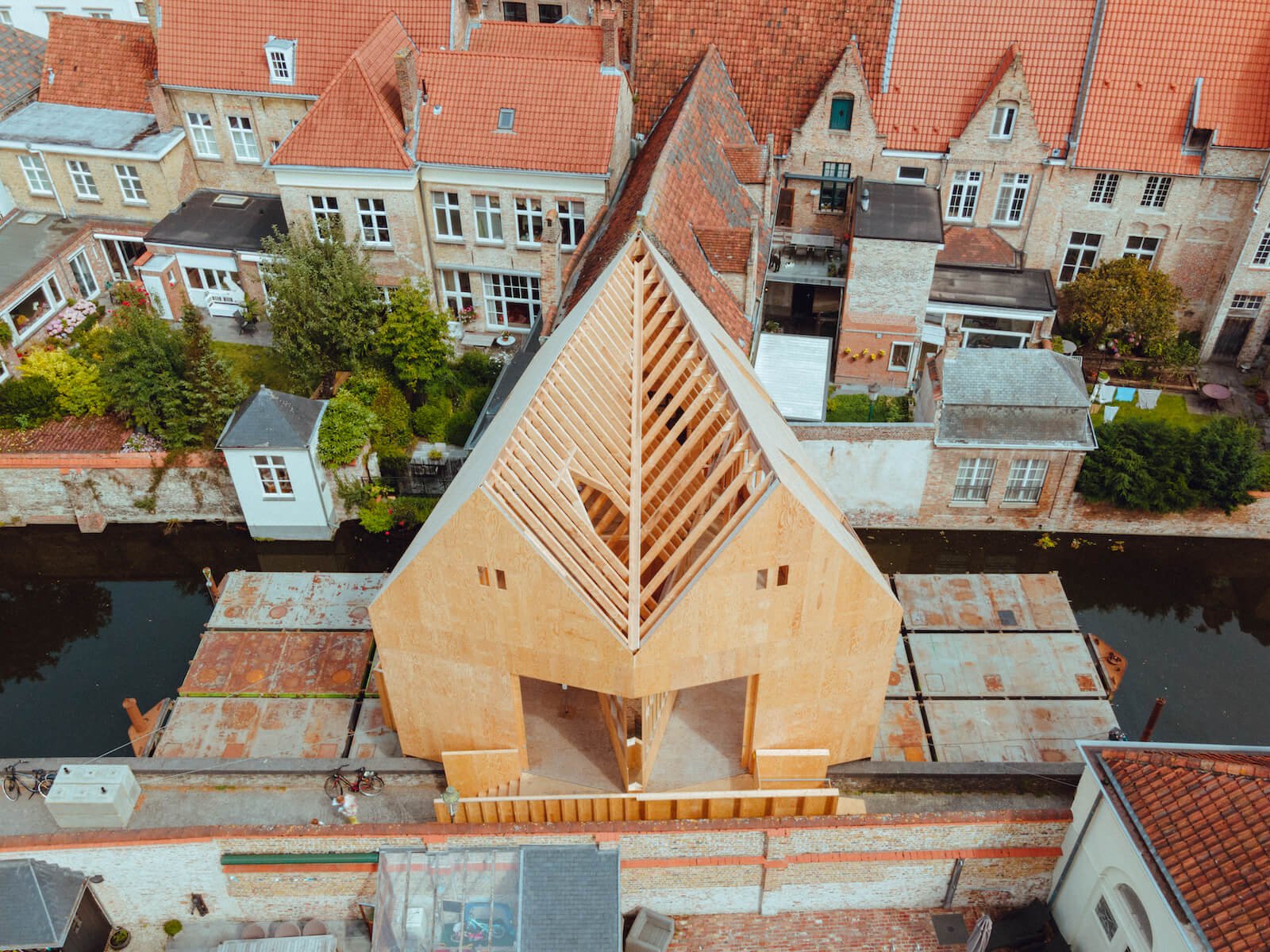 In splitting the house in two while keeping it as a cohesive whole, the firm makes art out of structural engineering: The roof is a latticework of beams that carves the upper portion of the pavilion into intricate volumes. One imagines that to walk around the building, a sort of kaleidoscopic effect – and a definite “Wow!” moment – comes into focus. 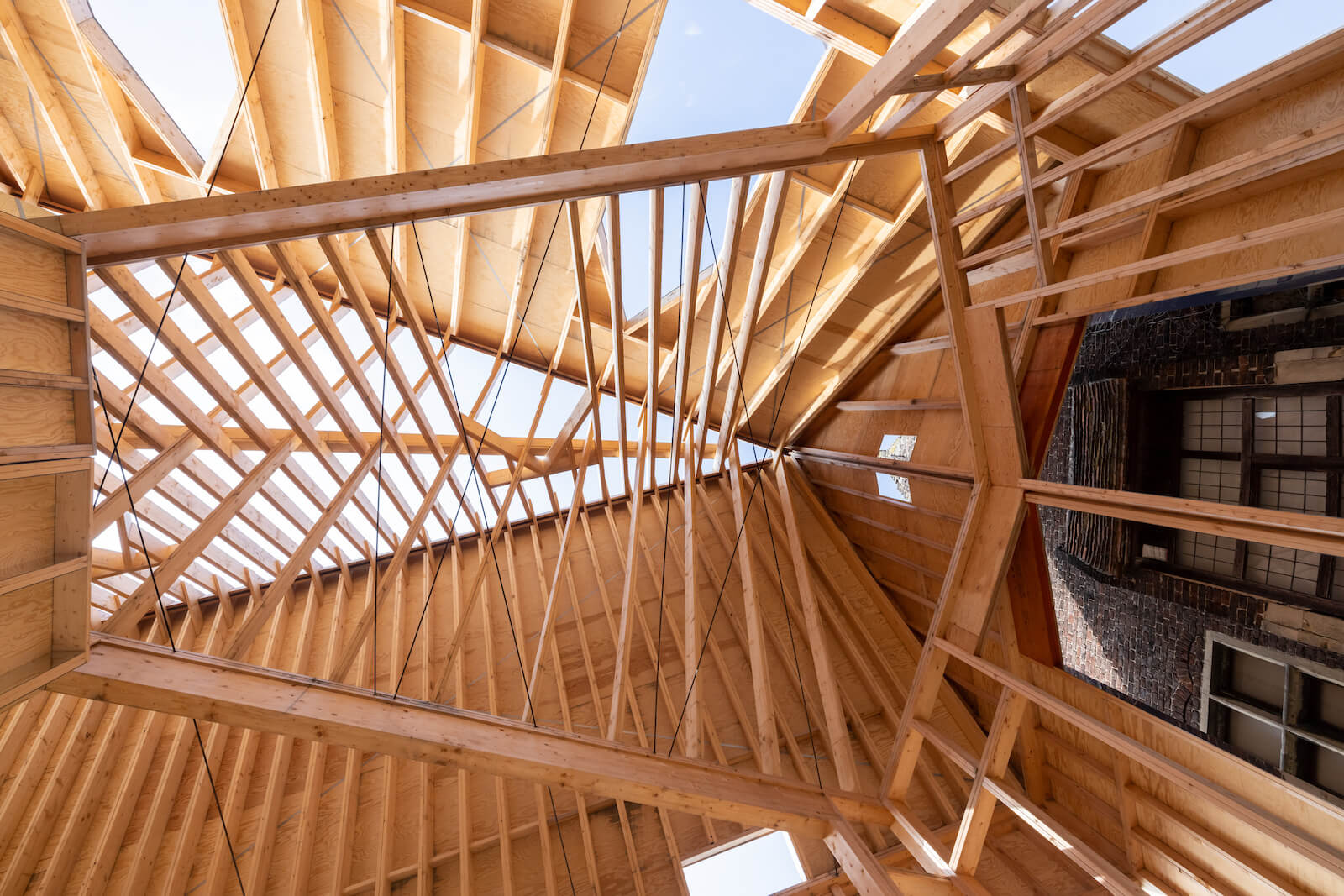 But for Para Project, the work is an evolution of a theme it’s been exploring for years now – that of “urban strangers,” or “doppelgängers,” such as those it explored in projects like the Roche/Dinkeloo Double and Storefront for Storefront. These experiments introduce something new – but made with a “common framing” – to local urban structures. The effect is an uncanny mirroring: The interlopers replicate but mostly riff on their antecedents. 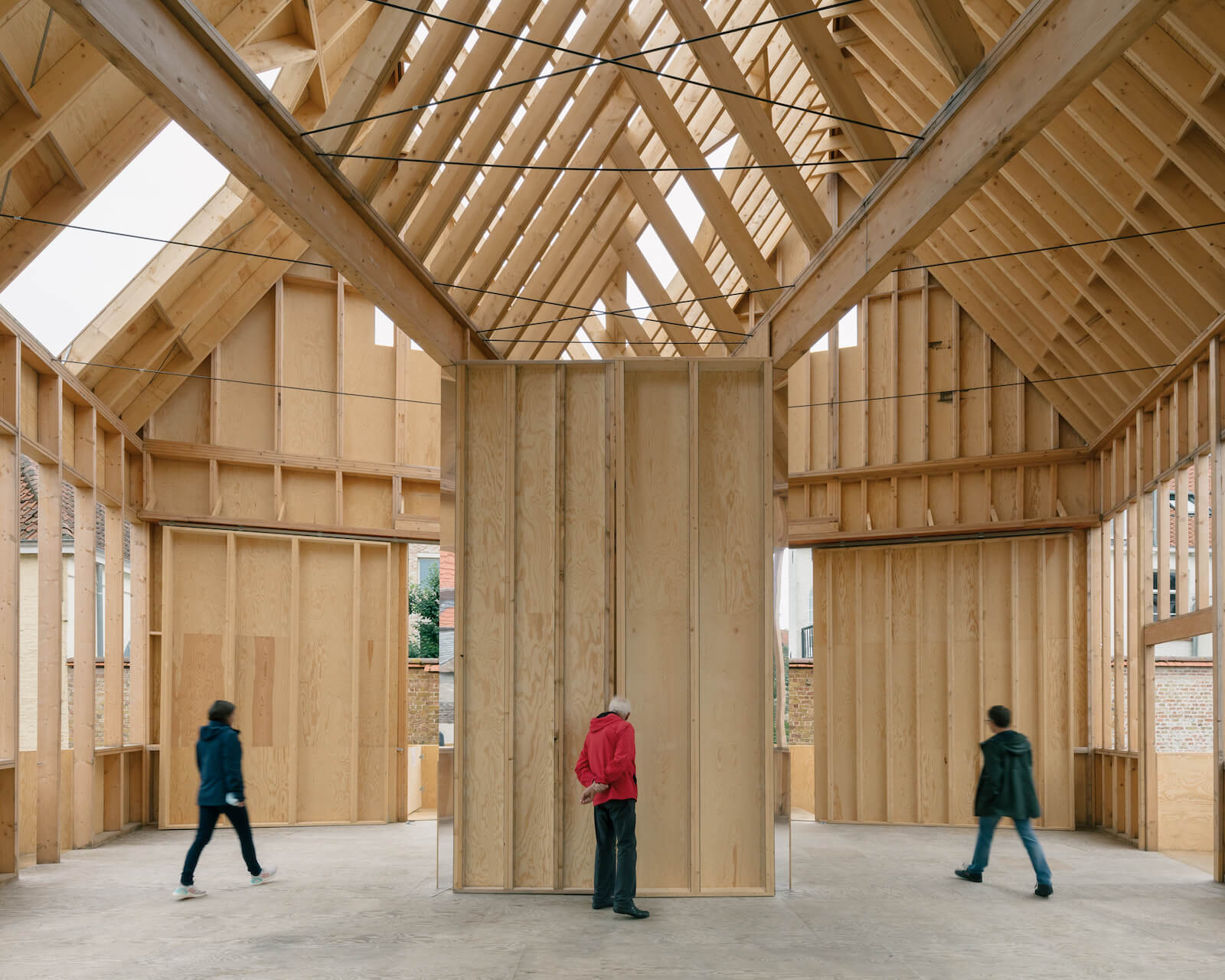 The house-like aspect of the pavilion also reminds us of how the firm, based in New York City and Cambridge, Massachusetts, is pushing the boundaries of residential architecture, like it first did in its marvellous Haffenden House. With its multiple skewed “windows,” that seminal project made a motif out of looking out/looking in – a dynamic it has in common with Brugge Diptych.