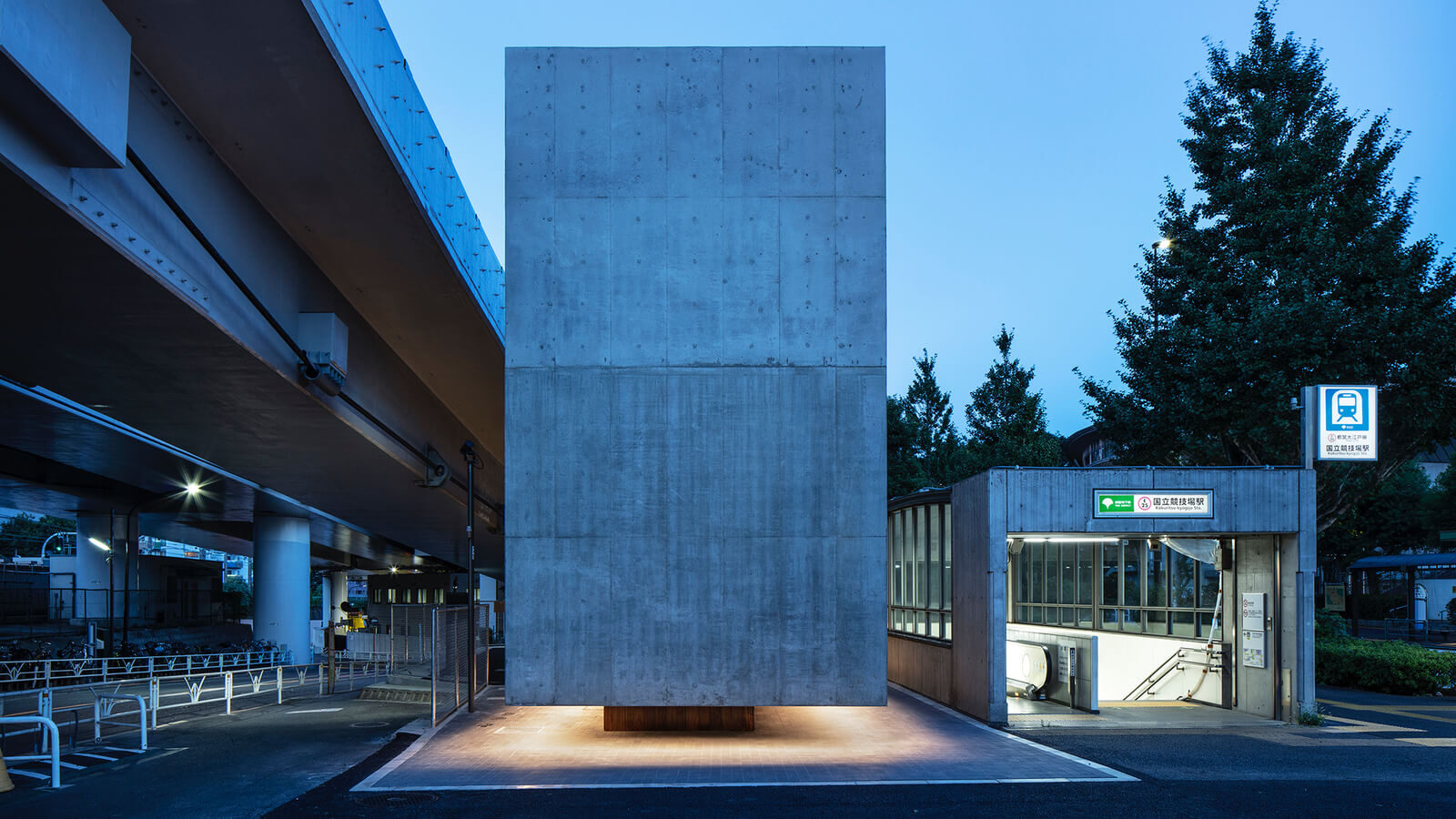 A Brutalist-Inspired Washroom Rises in Tokyo

As part of the city’s ongoing project to update its civic amenities, Suppose Design Office crafts an austere all-gender loo that flirts with boundaries of bodies.

Nestled between an off-ramp for the metropolitan expressway and the Sendagaya subway station entrance, a new monolith has gone up near Tokyo’s National Stadium. Behind the soaring 7.5-metre reinforced concrete facade, however, is a suite of all-gender public toilets. The high-design loo, conceived by local practice Suppose Design Office, is yet another addition to the city’s ongoing project of outfitting the Shibuya ward with improved washrooms ahead of the now postponed Olympics. 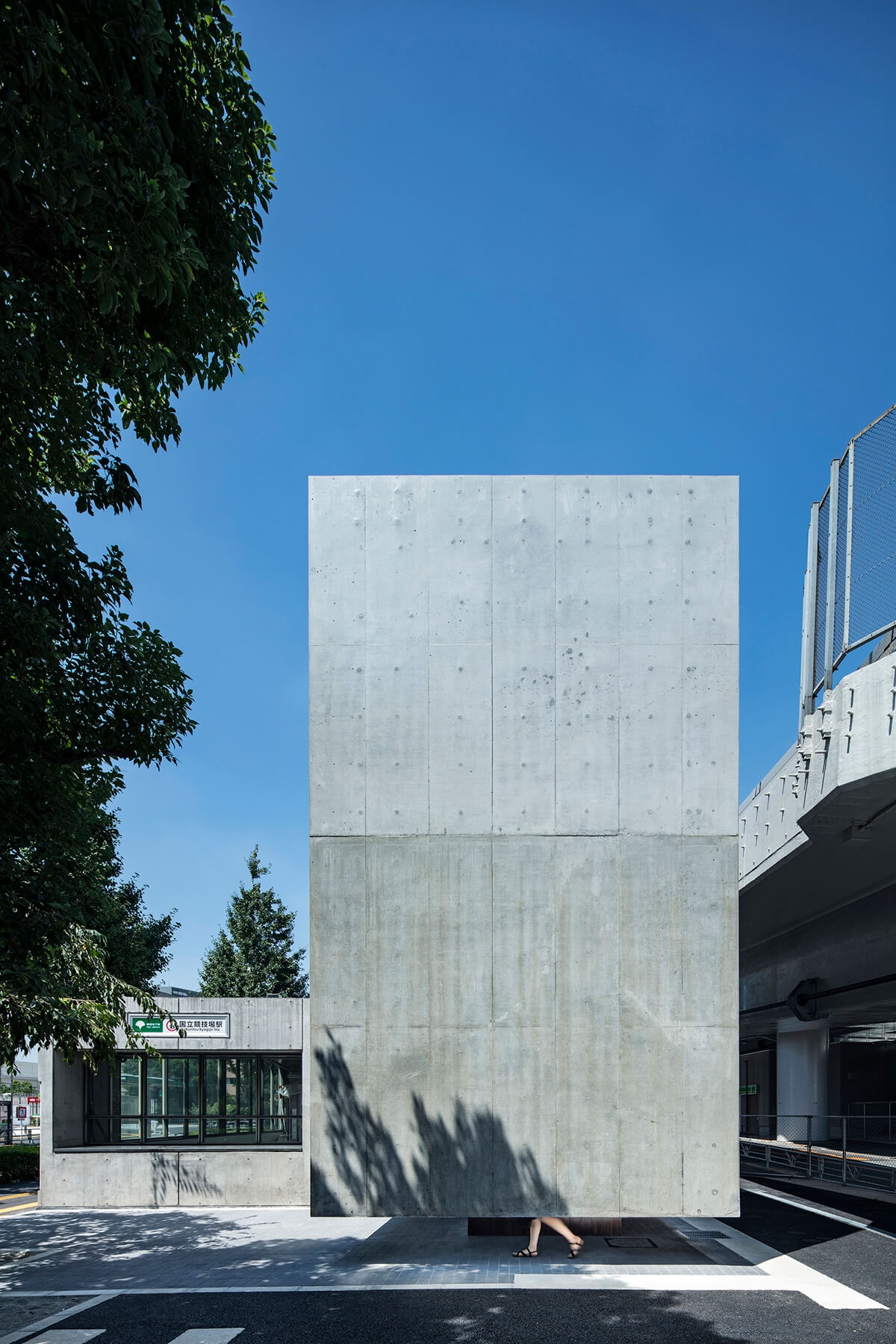 For the 75.9-square-metre facility, Suppose leveraged a number of simple yet daring moves that nod to the lineage of Brutalism in Japan and beyond. Two structural columns at the site’s core anchor the project while providing the ability to cantilever the suspended concrete enclosure. The opaque veil floats 50 centimetres off the ground, only interrupted by a concealed entrance along the narrow corridor between the new structure and the existing station. 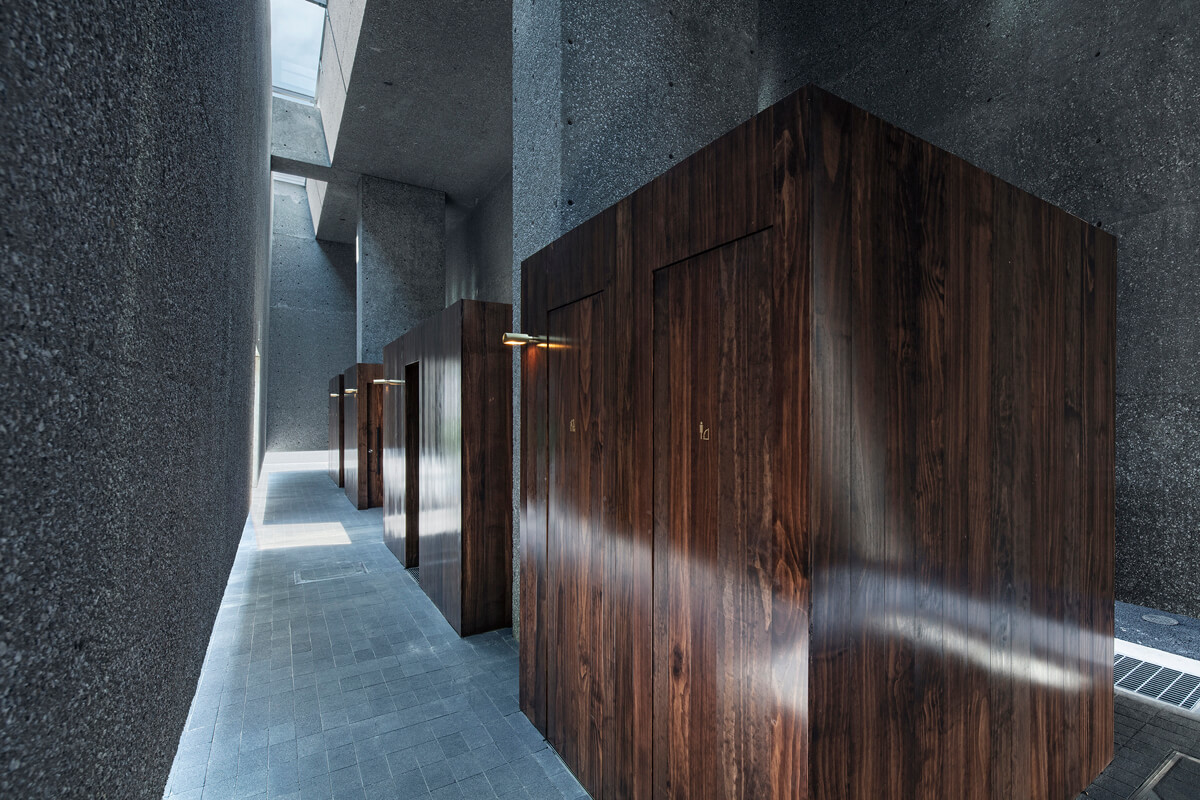 Inside, the austere skin gives way to a textured interior, illuminated by a run of linear skylights. Imbedded into the concrete shell are countless stones, rocks and debris that charmingly catch the light as the sun moves across the sky. “It is a space where you can unintentionally appreciate the ‘seasons and changes in time that nature weaves,’” says Suppose, “by the changing light.” Together, it’s a dramatic chiaroscuro effect that boldly embraces the haptic. 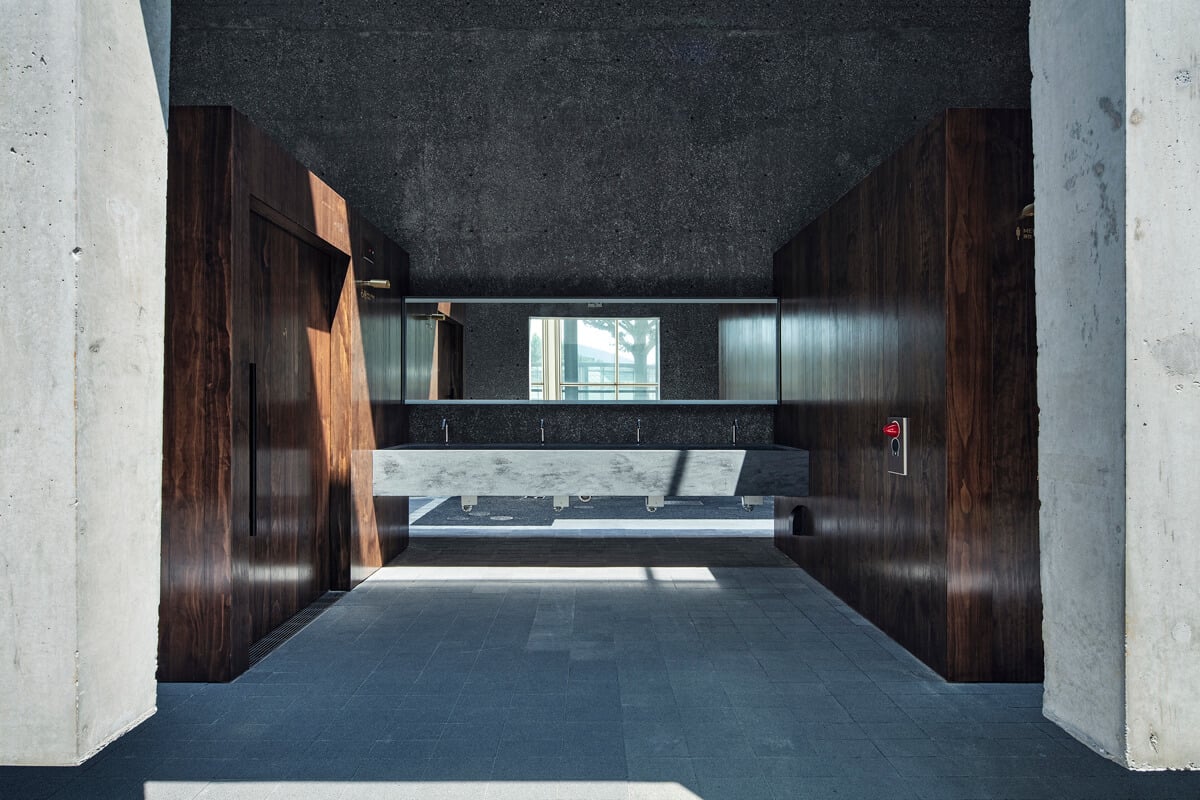 The central trough sink facing the entrance is the only spatial divider, sectioning the open interior into discrete gendered wings while literally mixing together the slippery fluids that are routinely separated in many gendered public lavs. Here, the element physically bridges the Accoya wood-clad pavilions housing the multi-person stall (which also includes a changing station) as well as the urinal enclosure, suggesting the commingling of liquids, fixtures and plumbing. (Perhaps even the potential for commingling the kinds of bodies these materials often stand-in for.) 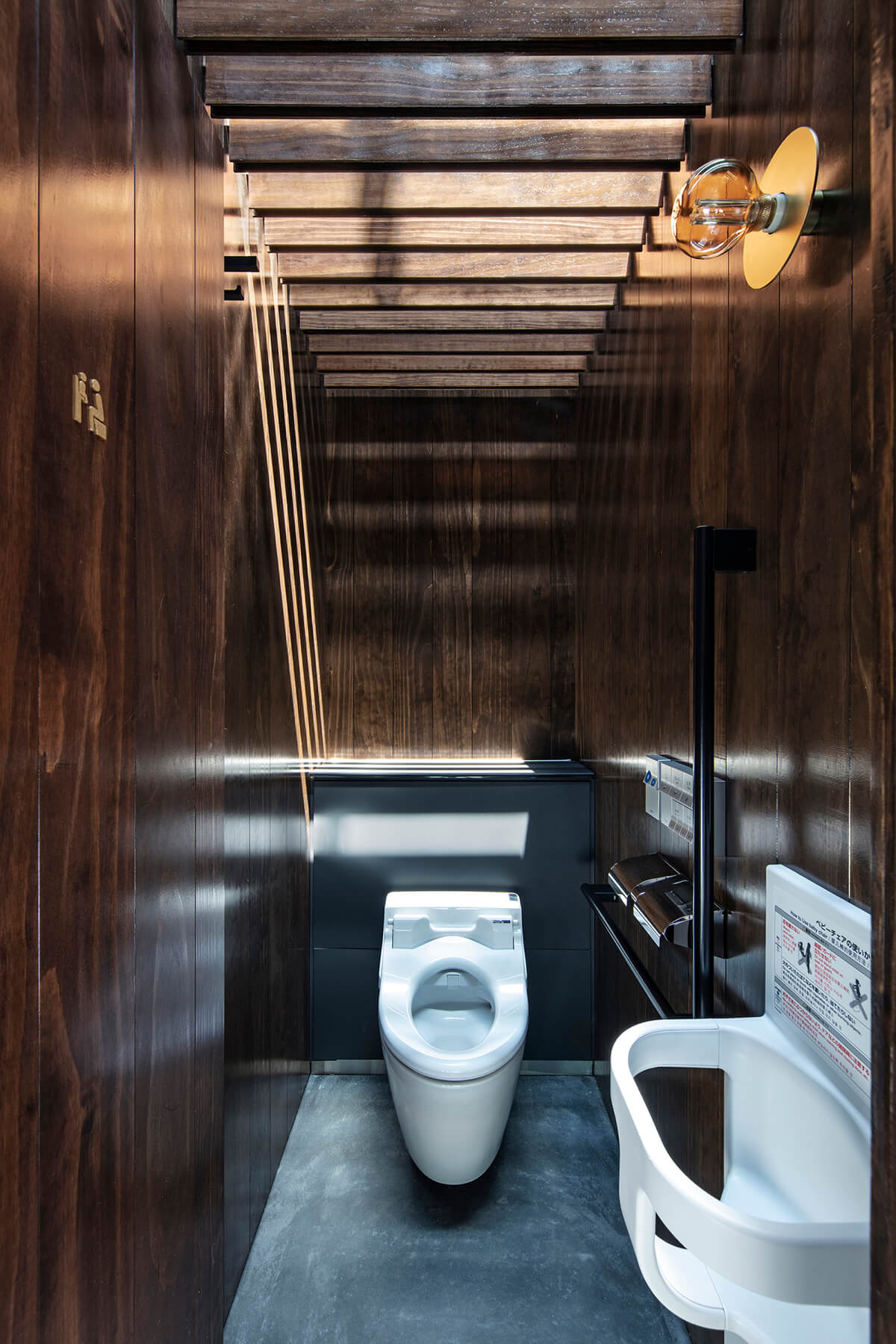 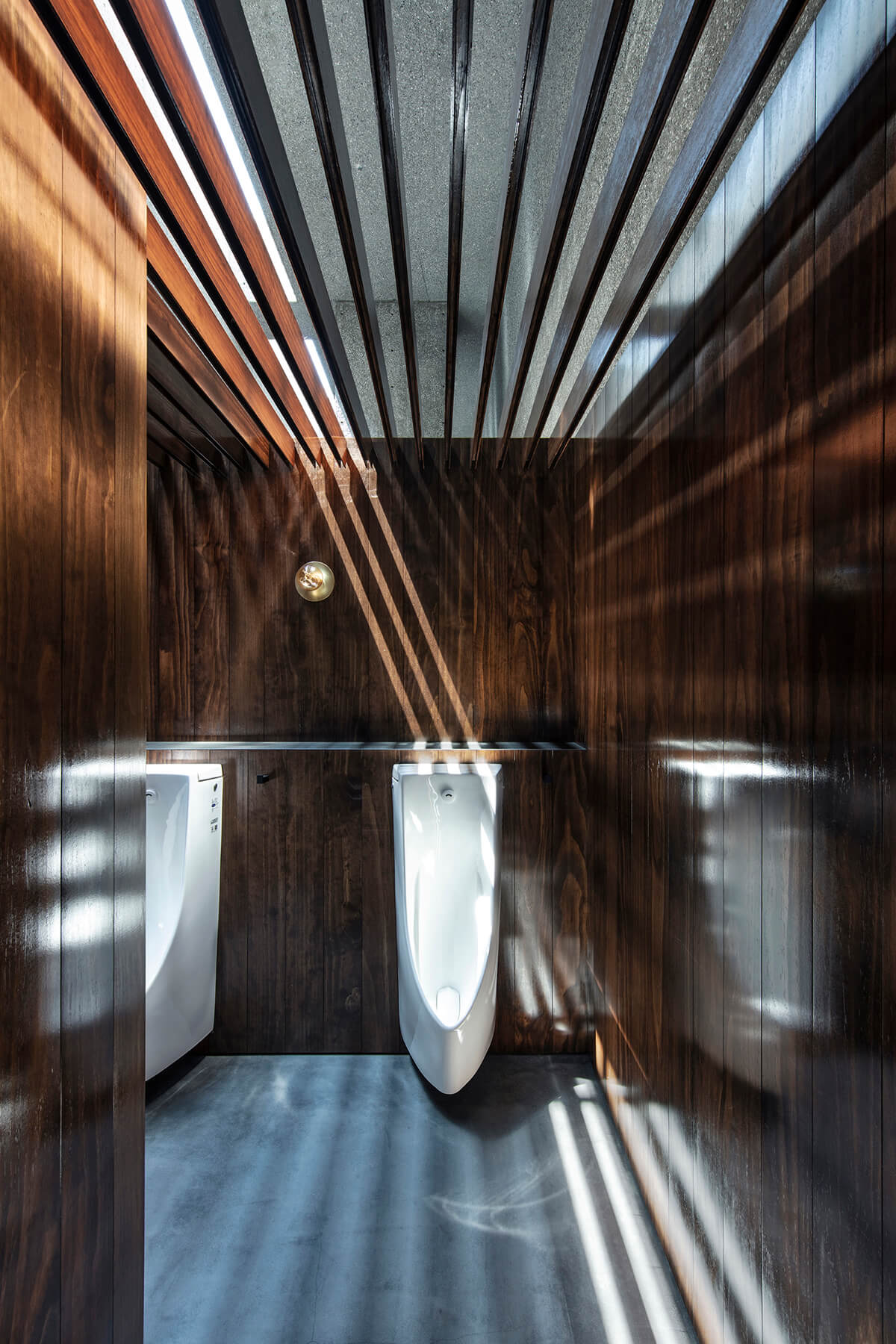 A series of slats form a canopy in each partial-height structure (six stalls designated for women and four more for men, though their self-containment questions the need to gender them at all), further modulating natural light from the openings in the shell. Brass signage in Japanese and English on the doors compliments the industrial fixtures — inside and out — that illuminate the space at night. 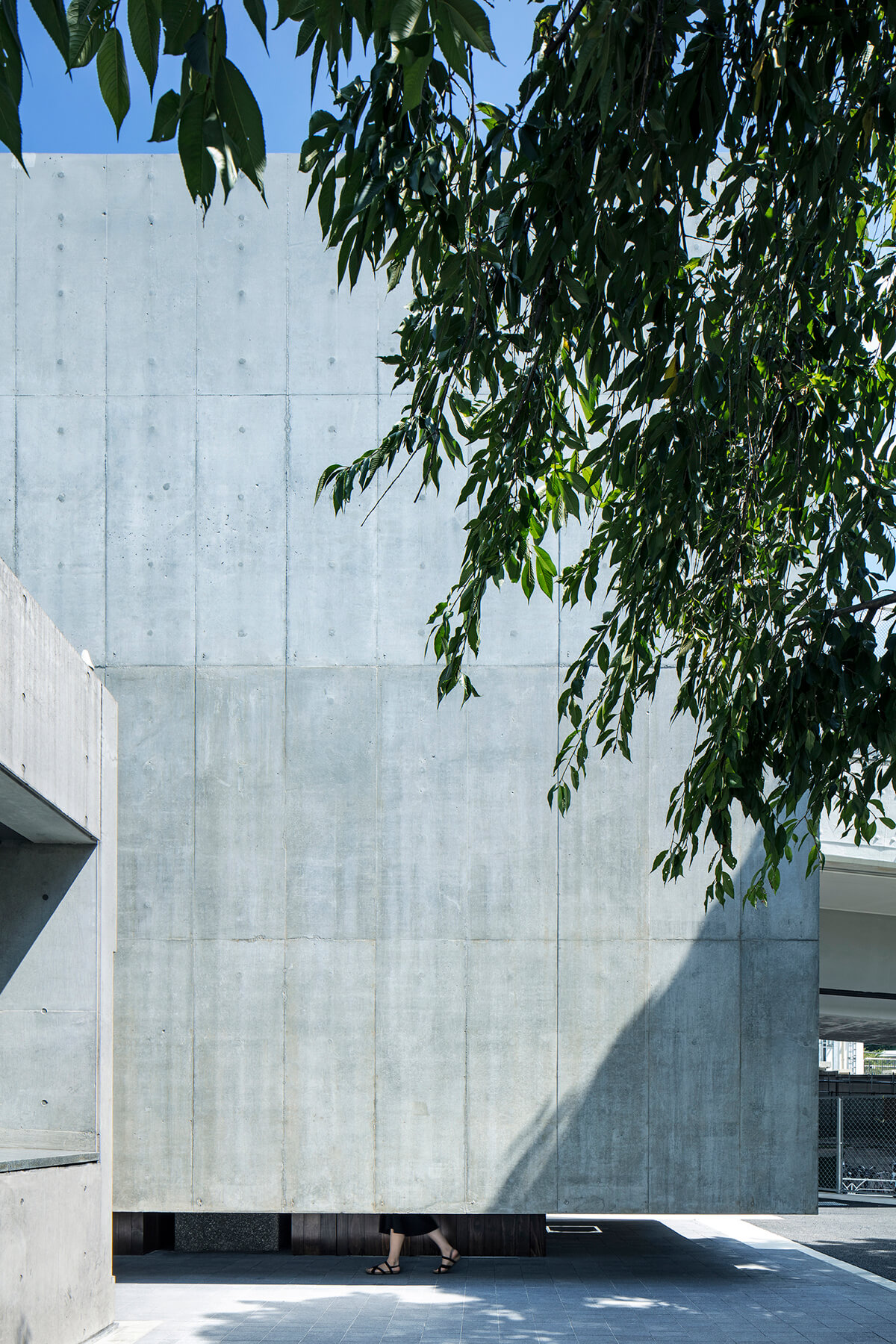 Though a playful and defining feature of the design, the partial reveal at the structure’s base serves another critical function. Gaps in typical washroom stalls highlight the use of material plumbing (toilets, urinals and the like) by bodily plumbing (whether one is sitting or standing), therefore establishing what are the “right” and “wrong” bodies in a given washroom through the clear position of one’s feet. Suppose’s structure moves this “foot traffic” in front of the stall, deliberately obscuring the potential for prying eyes to surveil the bodies of female-identifying, trans, non-binary and queer people in such public spaces. Such quotidian architectural elements are directly complicit in the staggering amount of assaults on trans and gender non-conforming individuals in public washrooms.

As part of the city-wide initiative, this new civic amenity and others like it are integral to unbuilding the binary oppositions in gender, ability, class and race that are embedded in the architecture of such places. In reimaging the typology of the public washroom, the structure reflects the potential for constructing manifold bodies into space, flirting with the boundaries between them whether it be a wall or washroom stall. 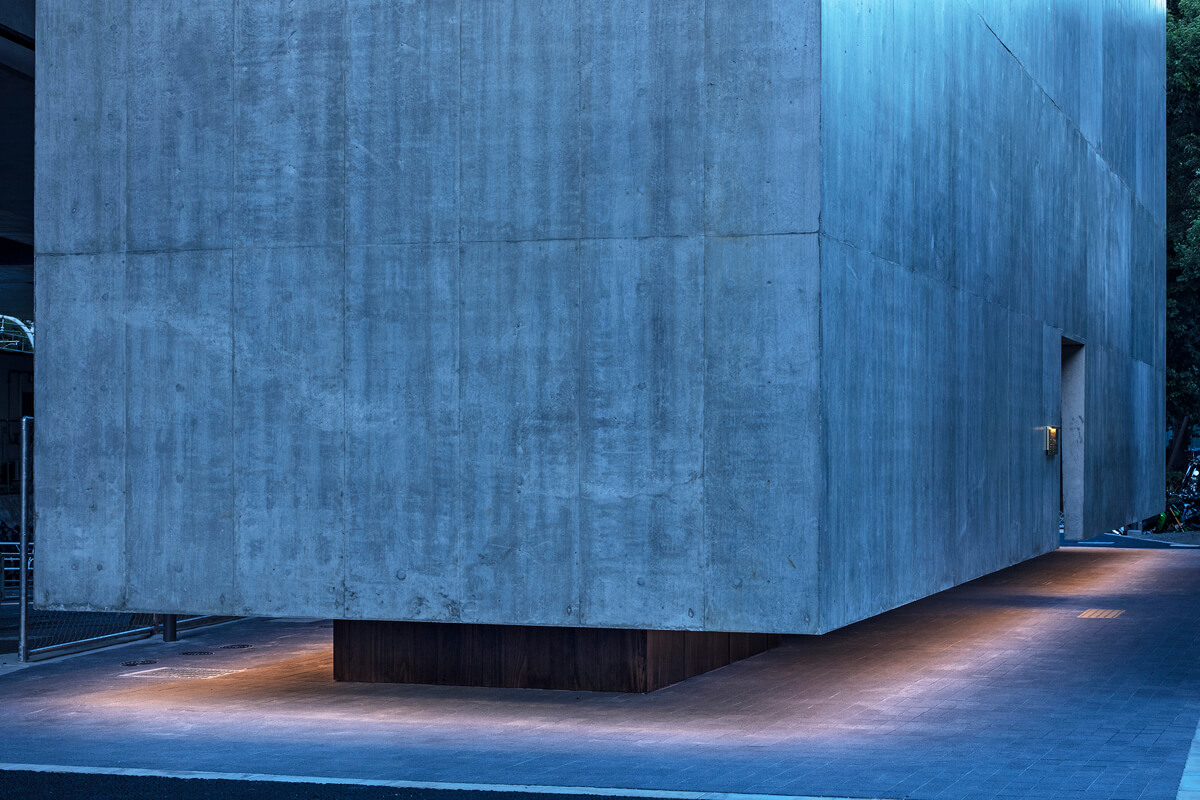 At night, integrated lighting reflects off the continuous tile floor to wash the site in a soft halo. In addition to acting as a beacon, it clearly reveals its occupancy. For some, this feature identifies a crucial amenity when nature calls. For others, it subtly but emphatically signals safety.

As part of the city’s ongoing project to update its civic amenities, Suppose Design Office crafts an austere all-gender loo that flirts with boundaries of bodies.