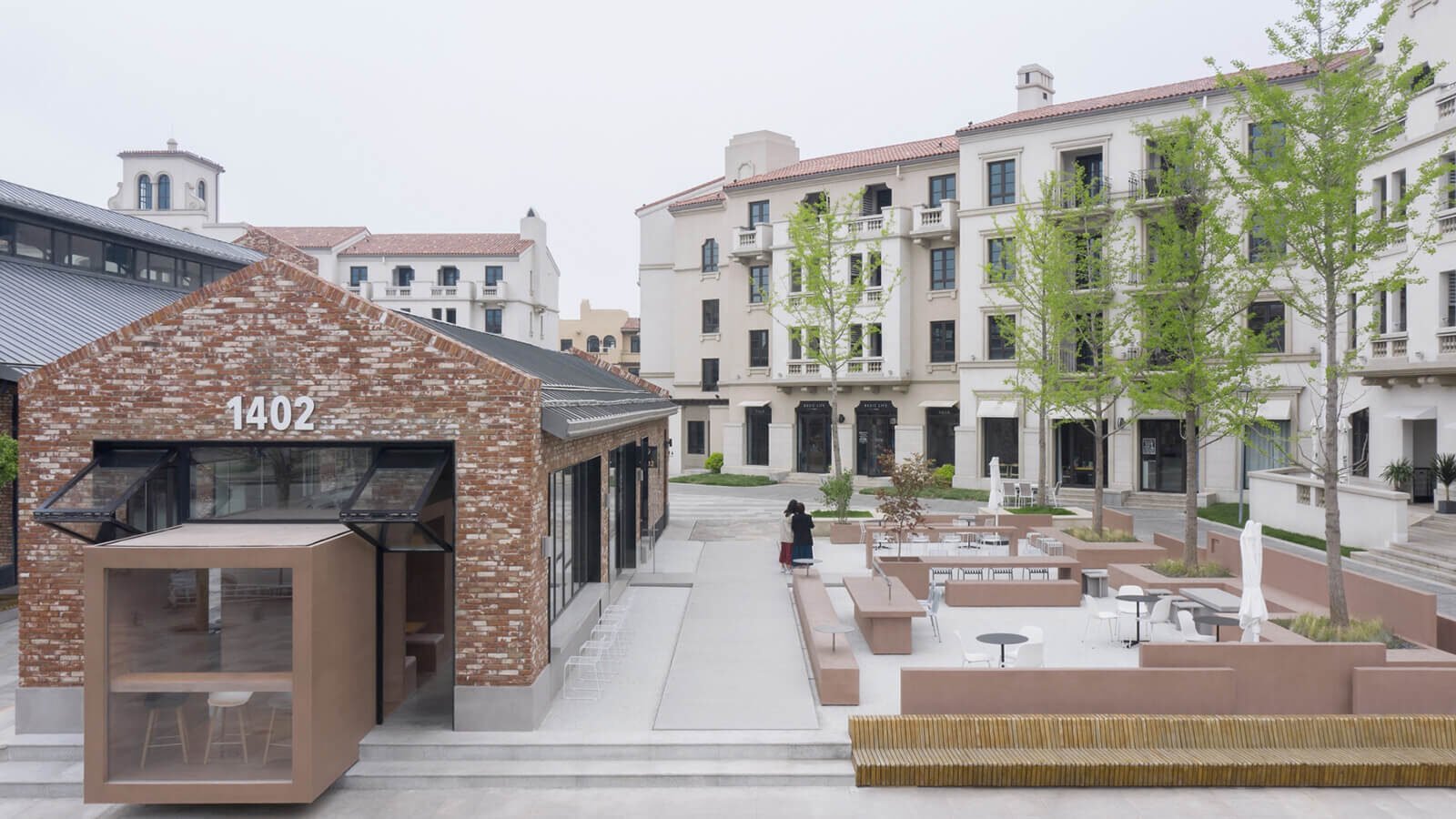 A Cafe Animates a Public Square in China’s Hebei Province

Wandering through the streets of Aranya — one of China’s burgeoning tourist destinations — it’s easy to forget that one is only two hours from the bustling city of Beijing. Imbued with a distinctly European influence, the local architecture is a stark departure from the monumental glass and steel monoliths favoured in the nation’s capital. But in the town’s public square, a new coffee shop is proving that these two distinct design languages can sometimes coexist in harmony. With a glazed addition and an understated yet impactful outdoor space, B.L.U.E. Architecture Studio has revived a traditional structure through a renovation that celebrates both the classic and the contemporary. 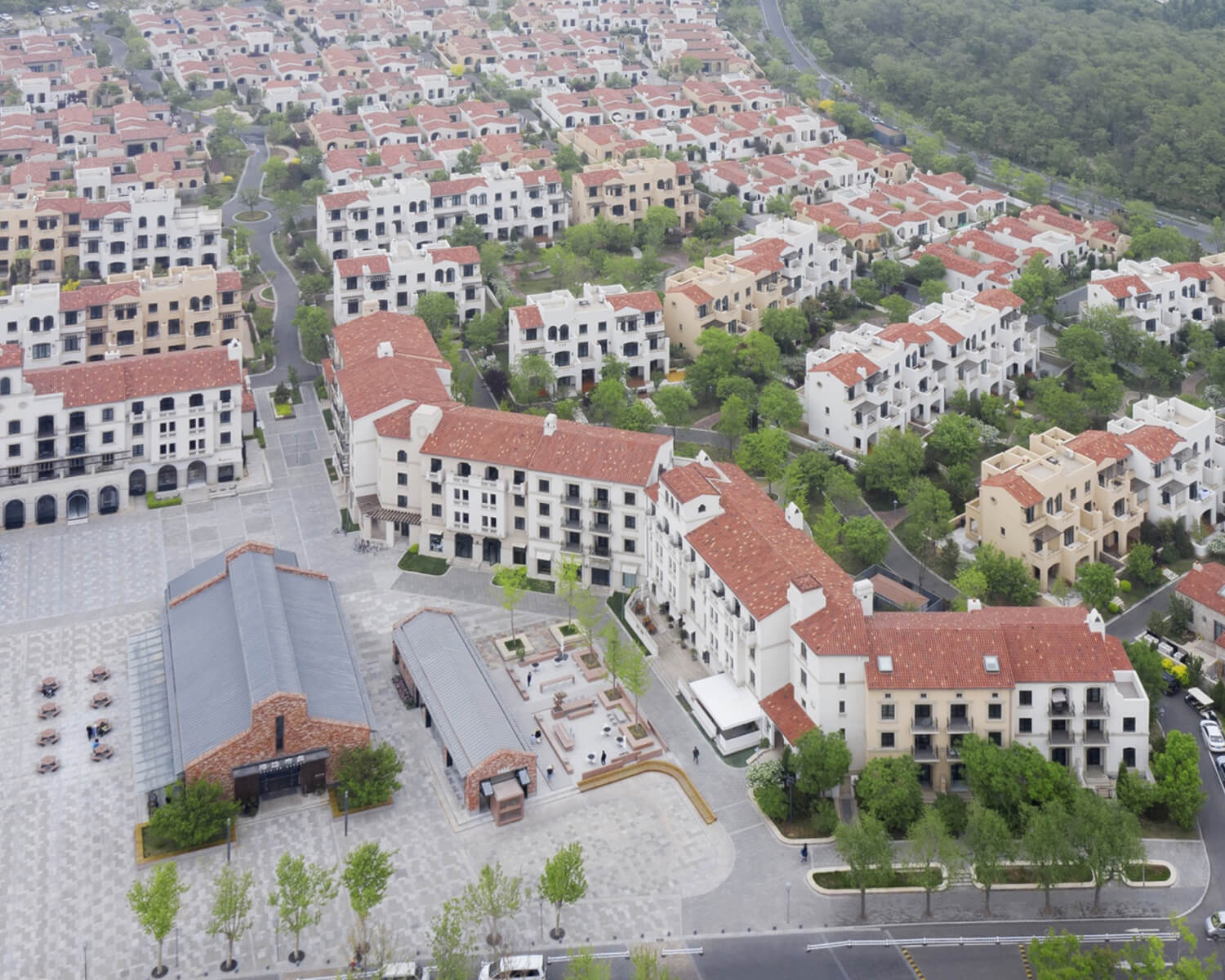 Short for Beijing Laboratory for Urban Environment, the firm is particularly adept at designing contextually sensitive architecture. Whether residential or retail, B.L.U.E’s projects are often driven by the interplay of old and new — and 1402 Coffee Shop shares this same sensibility. 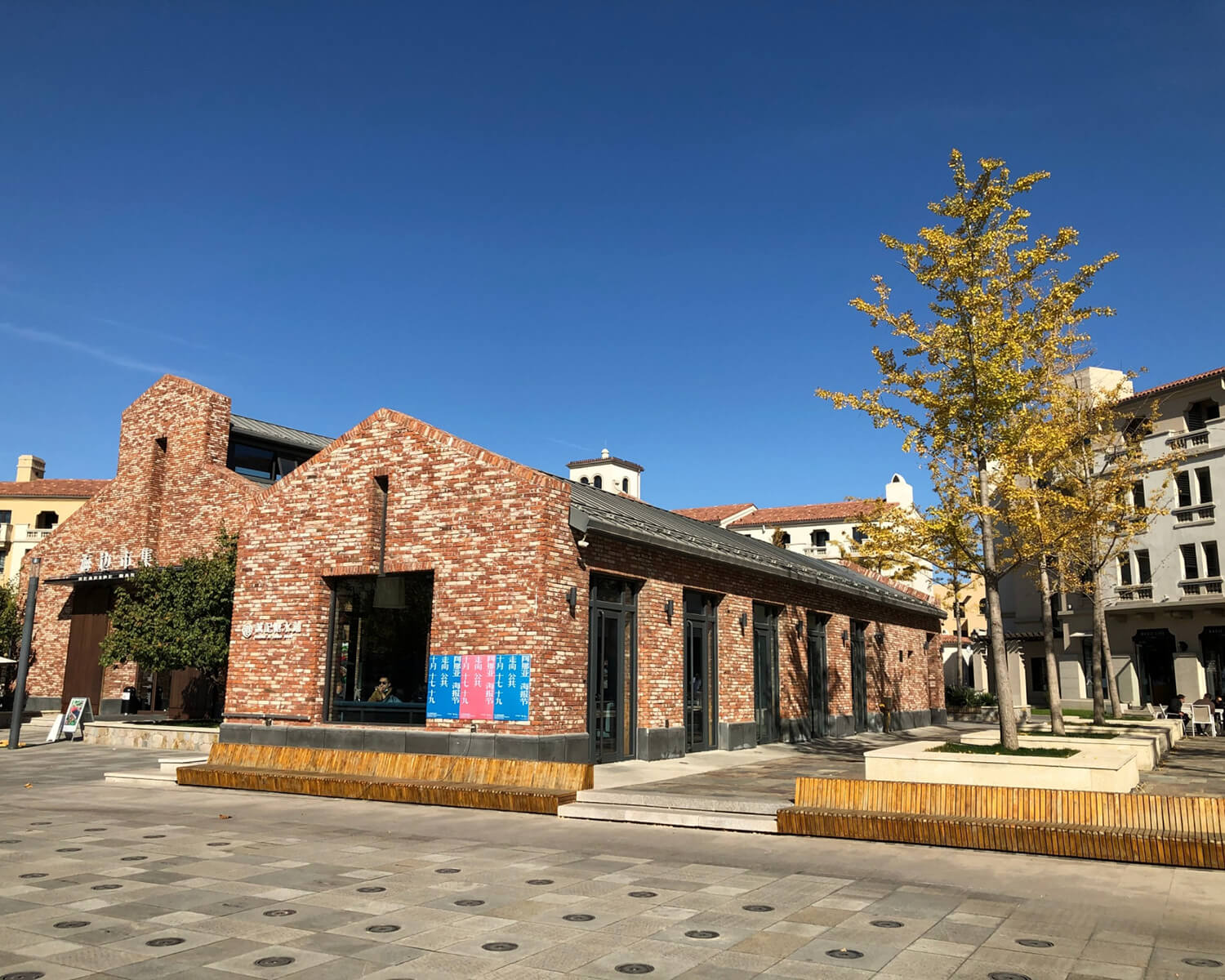 The original structure as seen before its renovation.

Though the building previously hosted a similar program (previously serving as a Hong Kong-style Tong Sui, or “sugar water” shop), the design had done little to elicit the welcoming atmosphere expected for a hospitality setting. With minimal intervention, the architects have retained the character of the original facade while strengthening the relationship to the adjacent square. 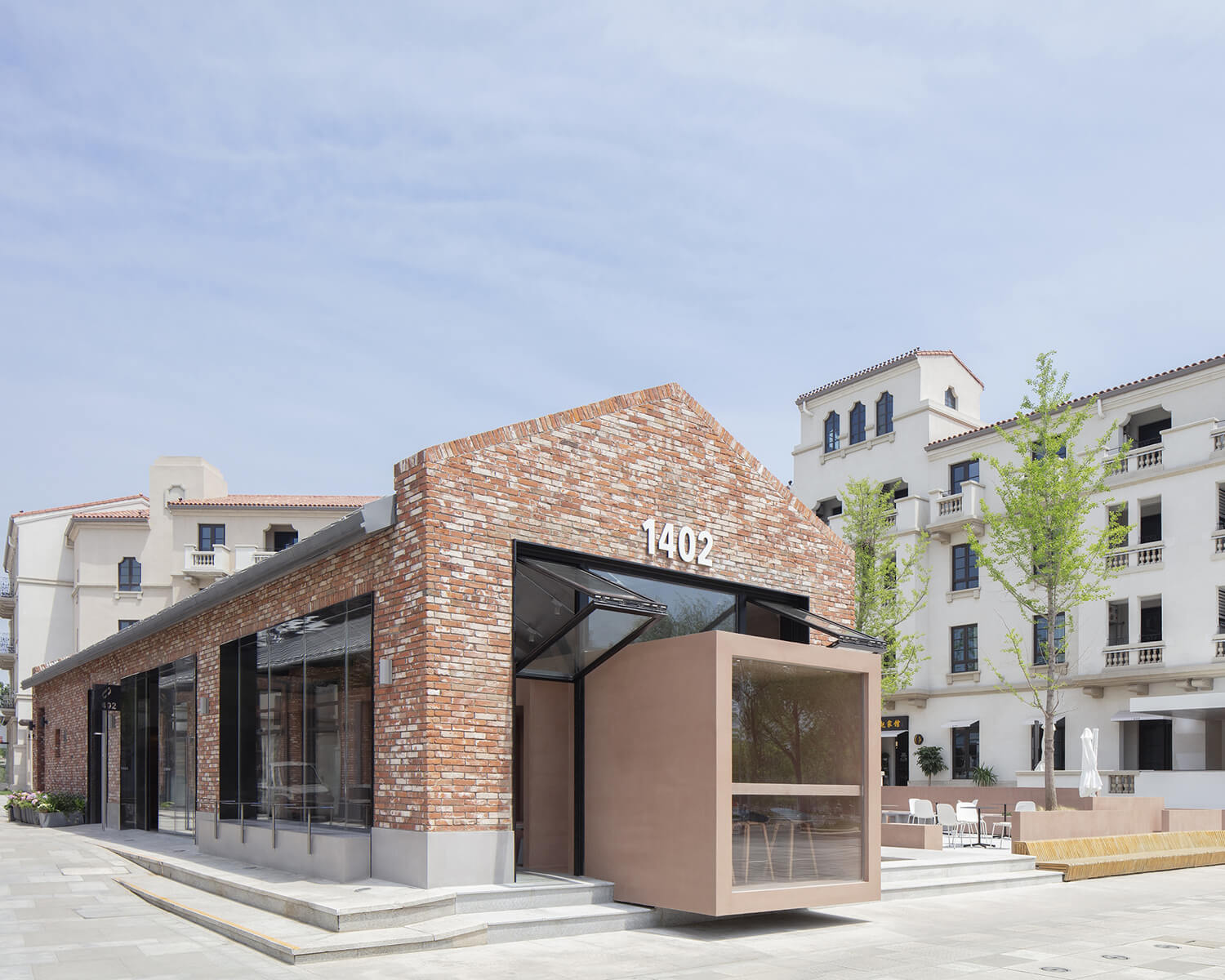 A new glass volume framed with taupe Dagu cement punctures the original brick-clad façade, providing a glimpse of the action inside. Though the design choice appears deceivingly simple, its execution was far more complex. The architects had to pre-cut the new opening — taking great care not to damage the facade — and insert a steel support so as not to undermine the structural integrity of the gabled roof. 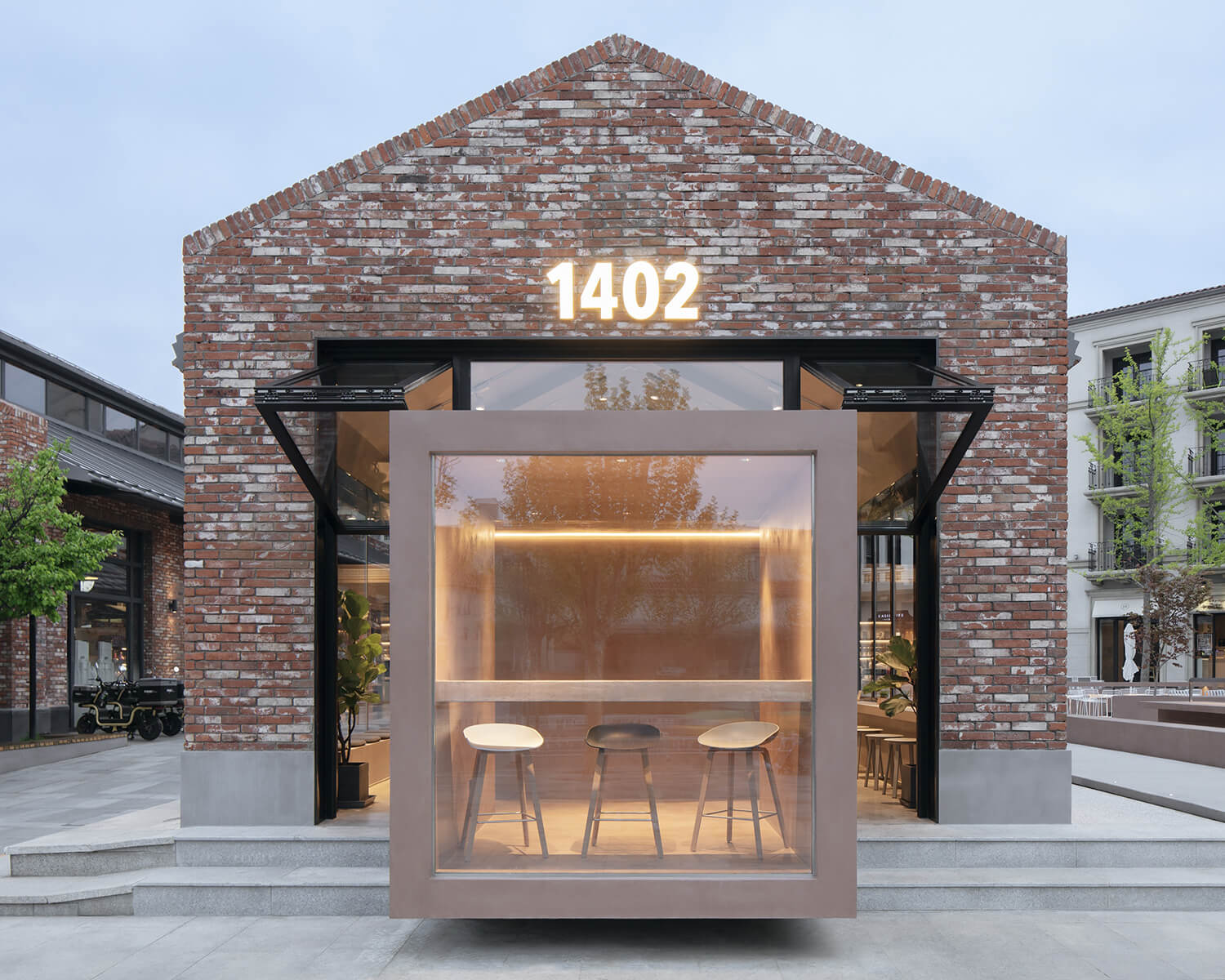 Flanking the new cement core, operable windows fold up to open out into the street, blurring the boundaries between public and private space. 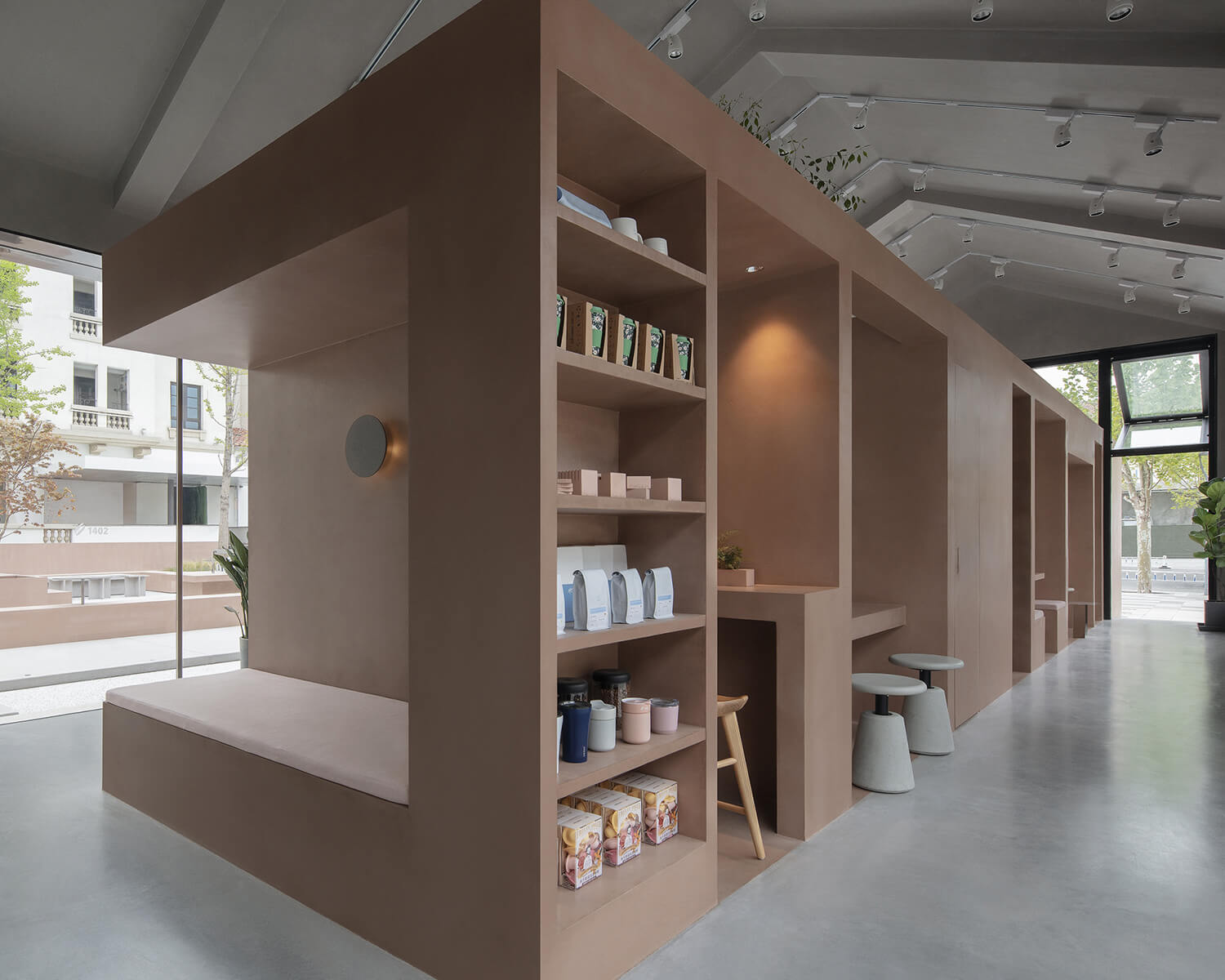 The interior is designed to facilitate varying levels of interaction. Concealed in private nooks within the central volume, guests can enjoy a quiet cup of coffee from the pour over bar, while patrons who prefer a more social experience can visit the more open espresso bar towards the patio doors. 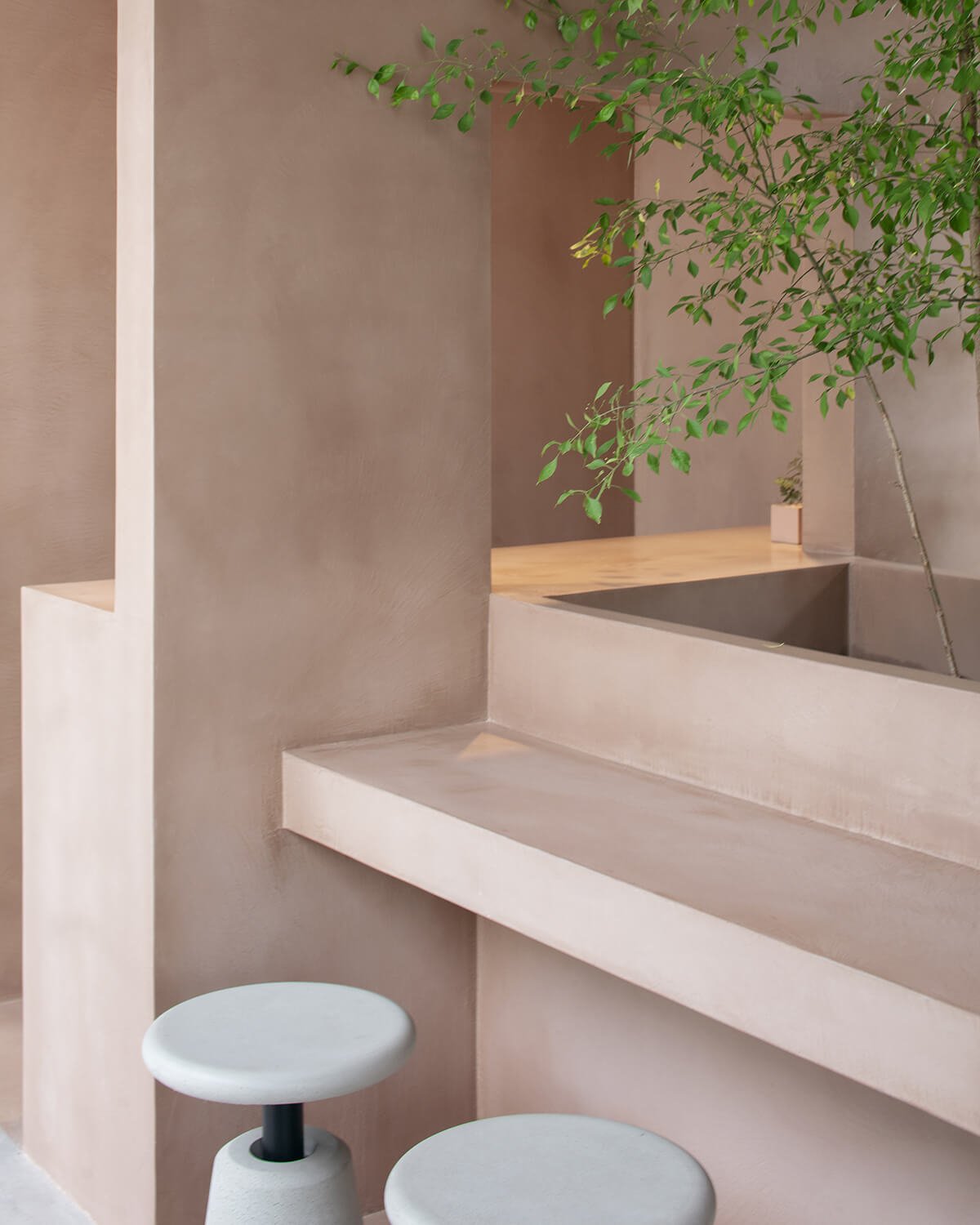 The human-centred ethos extends to the outdoor seating area. Because the patio previously served as a rest area in the public square, the client wanted to ensure that the space remained open and available to all. 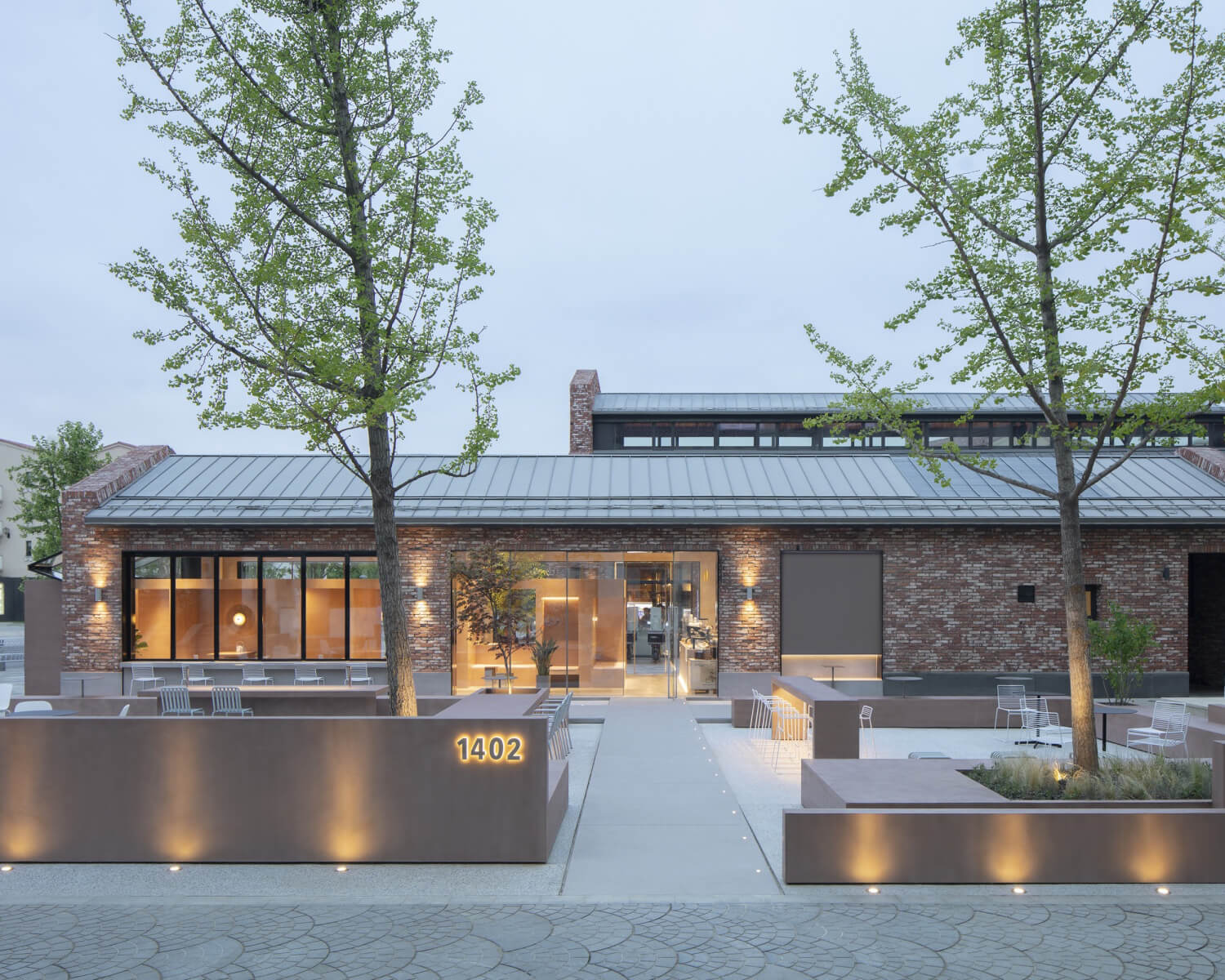 The architects used a low wall with varied heights to provide visual continuity in line with the square and retained the original landscaping, integrating existing trees with the built-in furnishings. The windows were also expanded, replacing opaque panes with clear glass to unify the indoor and outdoor spaces. 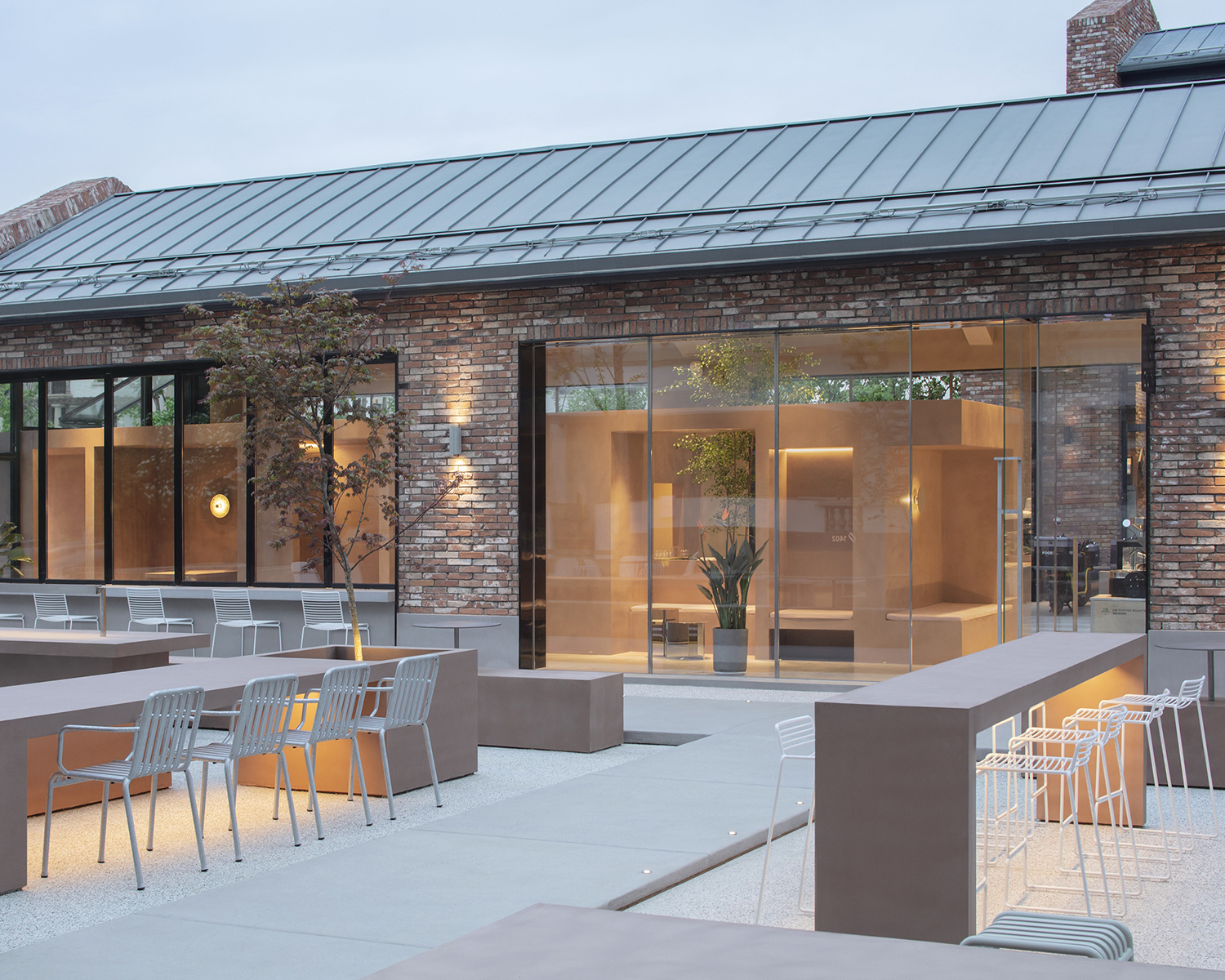 Benches and tables made of the same Dagu cement provide a visual connection to the interior while crisp white furnishings complement the old-world European ambiance. Below, exposed aggregate concrete flooring acts as a natural extension of the square, while subtly delineating the space. 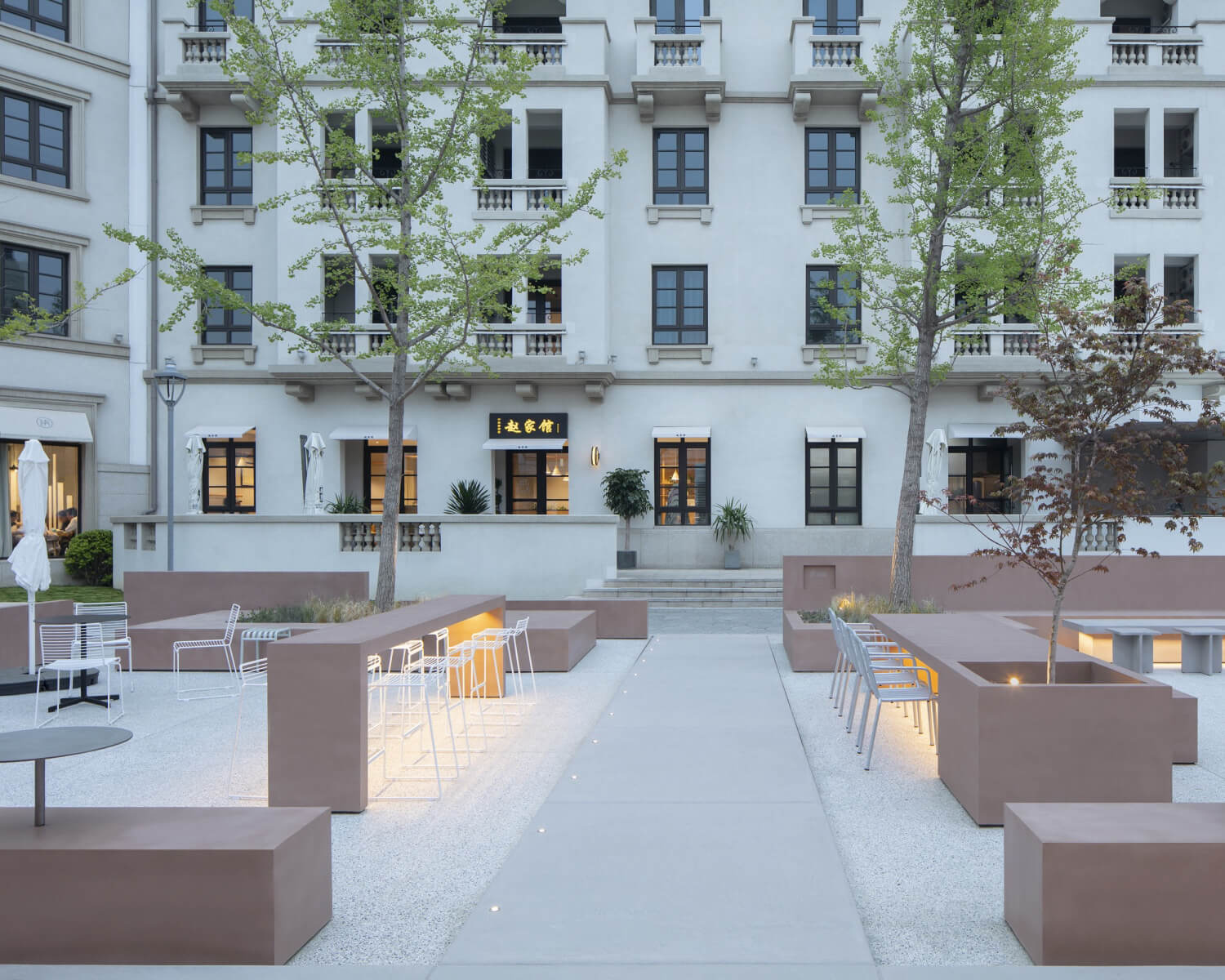 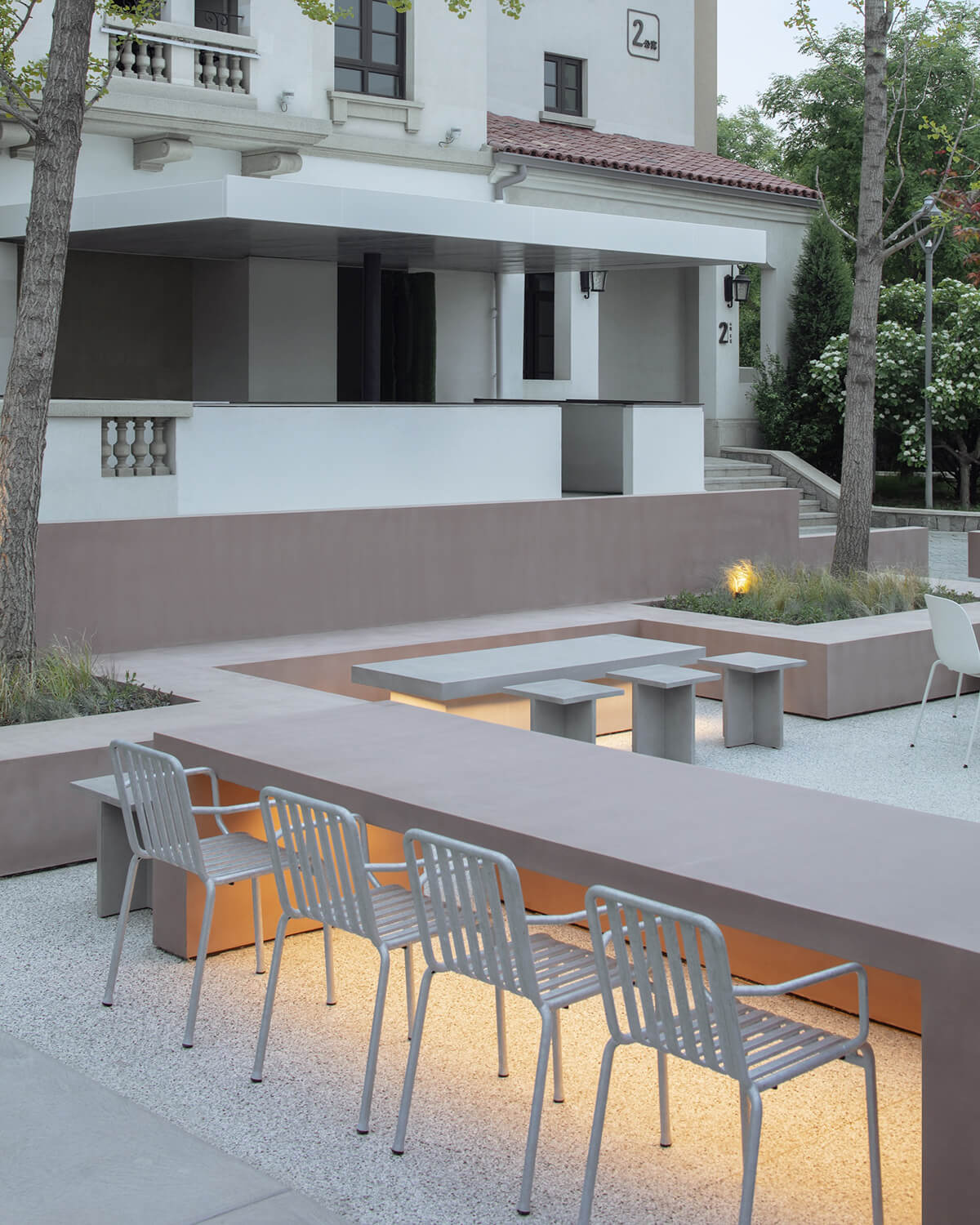 Subdivided into four distinct areas via a cross shaped walkway, the patio caters to each guest’s unique dining preferences. In careful consideration of scale, partitions and tables are set at different heights, establishing a deliberate “sense of spatial enclosure.” The series of room-like spaces run the gamut between public and private — for patrons who wish to dine together or the flaneurs who prefer to people watch solo. 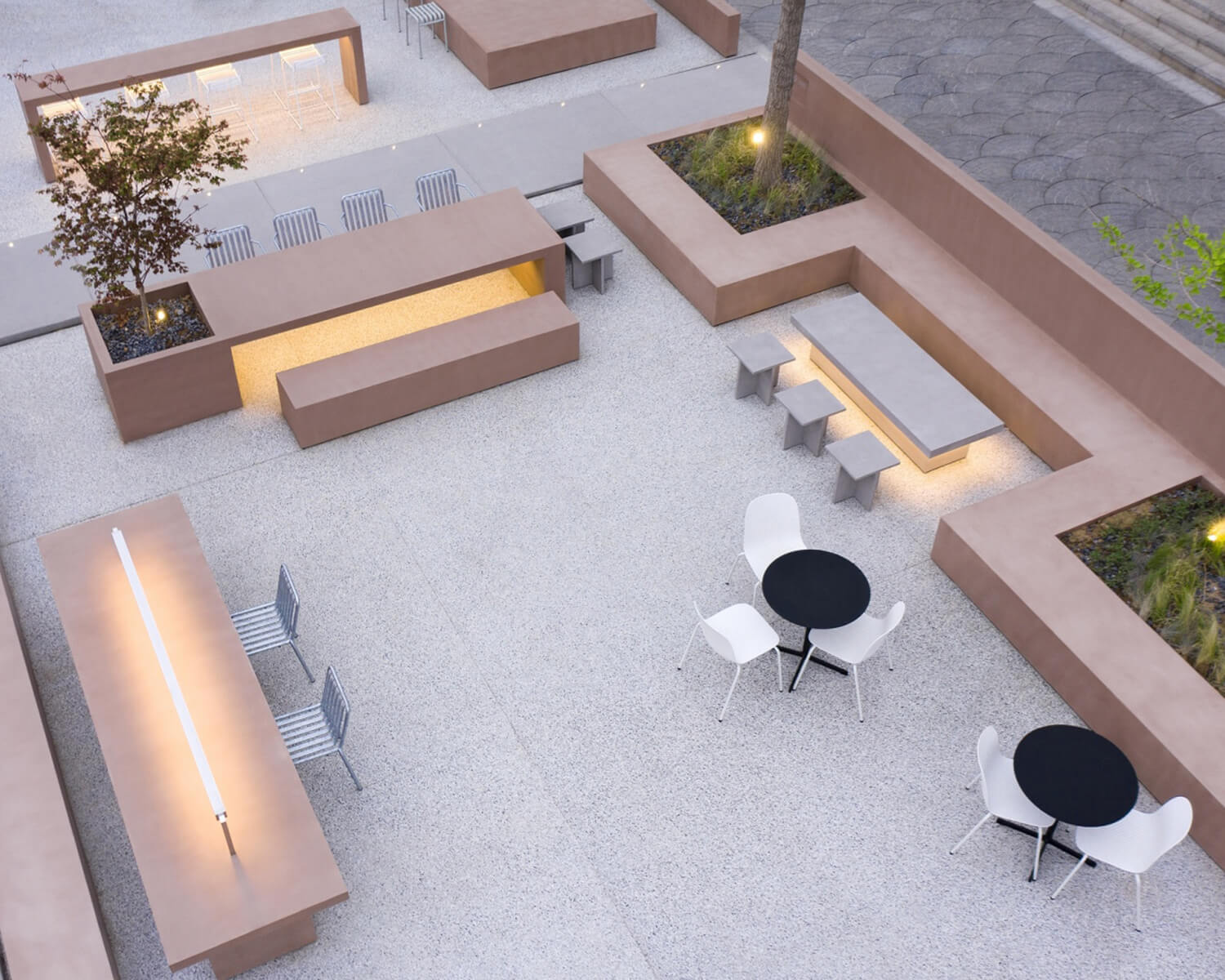