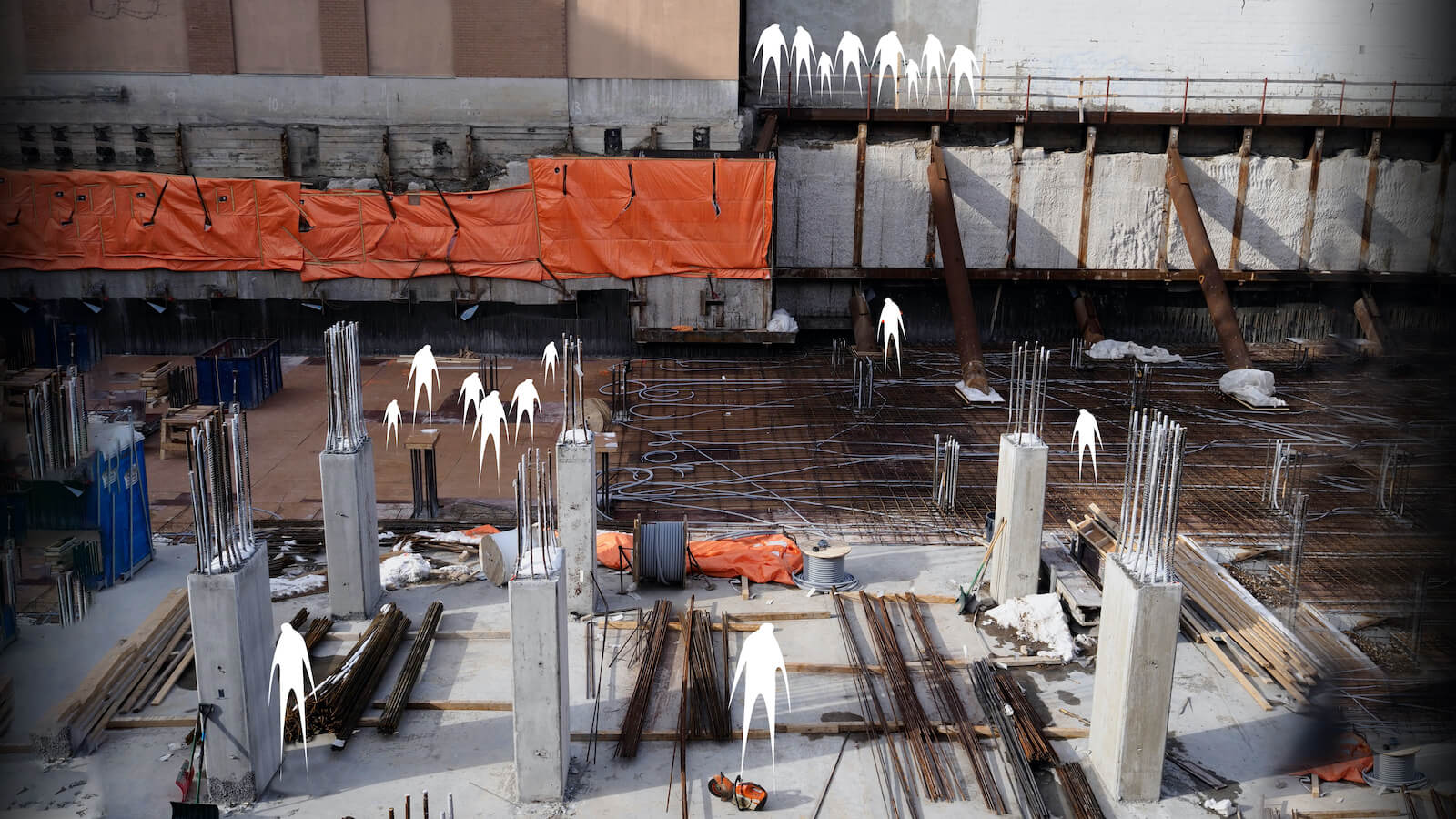 A Change is Proposed for this Site: A Short Story About Urban Inequity

The main characters that bring about the gentrification of racialized neighbourhoods are often hidden. Architect Reza Nik raises the curtain on how they work together – and how marginalized communities can play a bigger role.

The city is made up of many overlapping narratives, full of complex characters, that shape our social interactions and experiences. This is particularly true within the field of urban development, where the main players and their roles are often veiled, misunderstood. While urban dwellers are becoming increasingly aware of the significant impacts of development on our lives – as construction sites, cranes and luxury condos populate our urban landscapes – we rarely scrutinize such questions as how we build and who we build for (1).

The story I am telling here focuses on disenfranchised communities and the urgent circumstances they face as they endure continual displacement due to real-estate investment in their “up-and-coming” — read: gentrifying — neighbourhoods. As a socially driven architect, I am particularly interested in examining the role our profession plays in contributing to the city’s story and in perpetuating this urban inequity.

1. In her open letter, A Call to Courage, Jay Pitter discusses the larger inequities within our city, and presents a glossary of terms and practical steps in addressing inequity within our practices.

The reality I describe exists alongside another major discourse: Toronto is in dire need of more affordable housing, particularly of the so-called “missing middle,” which has been exhaustively discussed by local housing experts, city builders and community advocates (2). We must eliminate the barriers to increase the housing supply, and a recent City Planning report advocating gentle density may help push this in the right direction (3). But policy change is just one of many variables in this equation. NIMBYism, unfortunately, is another; some affluent communities and neighbourhood associations actively counter any progress, often with arguments about upholding “neighbourhood character” and limiting building heights – arbitrary values that obscure their entrenched socio-economic interests. This story is not about them; it will not delve into their claims, nor the type of community responses that seek to halt construction of housing projects for the most vulnerable (4). And this story is not about those types of projects, which should be championed and implemented city-wide.

2. House Divided is a brilliant collection of essays on the topic.

3. “Expanding Housing Options in Neighbourhoods” outlines the changes to policies that have prevented gentle density in and around the city of Toronto.

4. For a recent example, see 11 Macey Avenue in Scarborough.

Instead, this story has at its heart the question: What does community really mean? While NIMBYs are often taken as shorthand for any type of community advocacy, this narrow definition not only risks erasing the people actively advocating for more affordable housing and increasing density within the city (as well as equitable and transparent processes for doing so), it also outright ignores another type of community, one habitually overpowered by forces seemingly out of its control that seek, ultimately, to commodify the built environment. This story is about them. And it’s about us architects: In order for the profession to contribute to the systemic change that our communities have been calling for, we need to recognize our privilege and our power in order to hold ourselves and each other accountable. 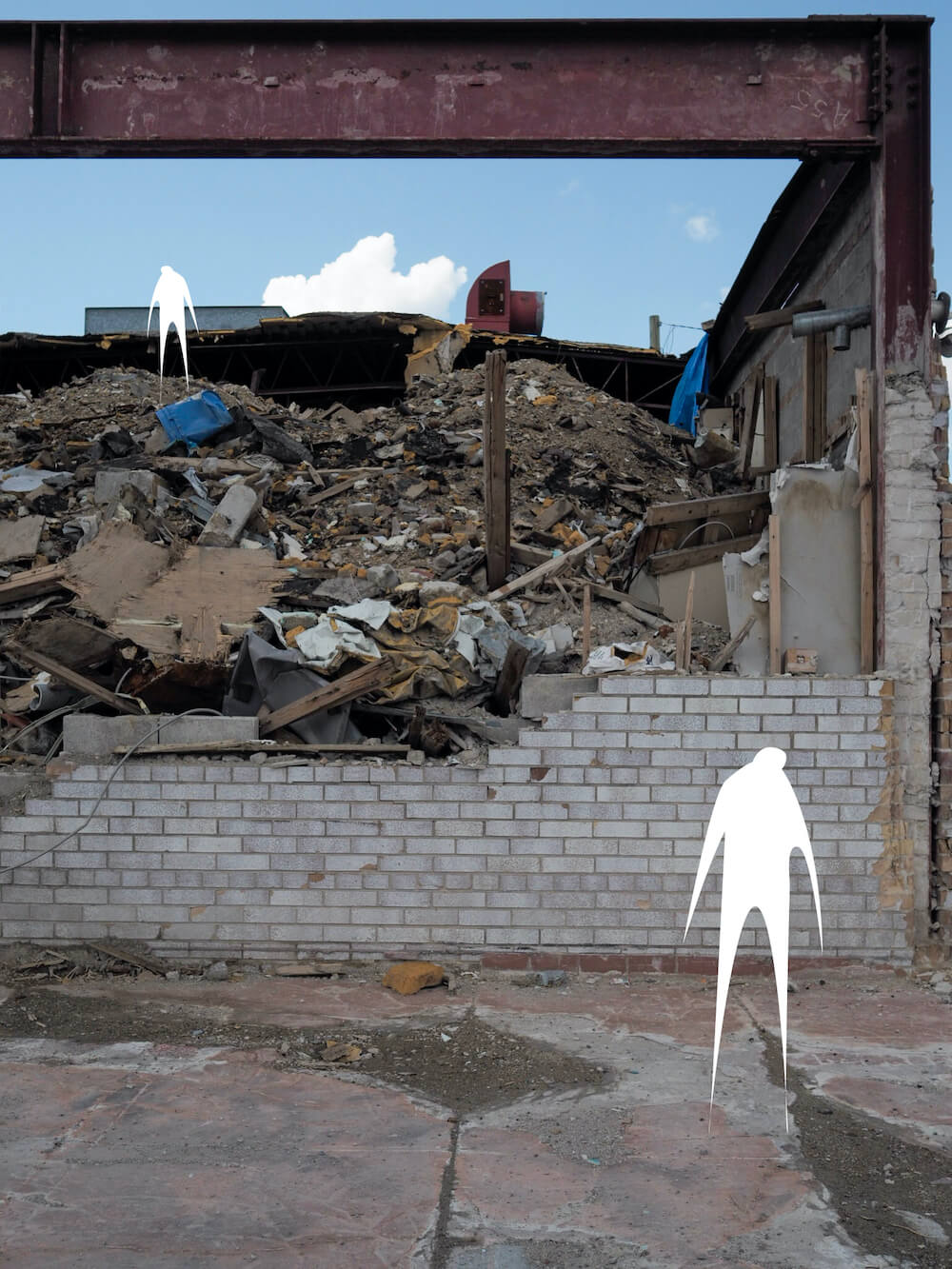 City-building is a highly nuanced process that involves all city dwellers. This story is told through six characters who play a significant role in developing our urban realms. Abstraction and simplification are intentional in order to shed light on the broader conversations around inequity. In reality, there are many minor players involved at every level. This is a simplified depiction and a microcosm of a much larger and multi-layered phenomenon.

The Developer hires a Realtor to find a suitable development property in the city.

5. Labels such as “up and coming” and “emerging” are gentrification speak for places that are generally home to low-income, racialized populations.

6. Predatory tactics can include but are not limited to taking advantage of sellers in distress, or owners with properties in poor condition, or playing a role in “bully offers” which make it difficult for owners to say no. A recent campaign in Parkdale is a local example.

The Realtor identifies “emerging” neighbourhoods which are speculated to be “revitalized.”  (5)

/ The Realtor locates a property for sale that suits larger developments.

/ The Realtor uses predatory tactics to acquire the desired property. (6)

The Realtor negotiates a great deal for the Developer.

The Realtor praises the Developer on their “smart” investment. 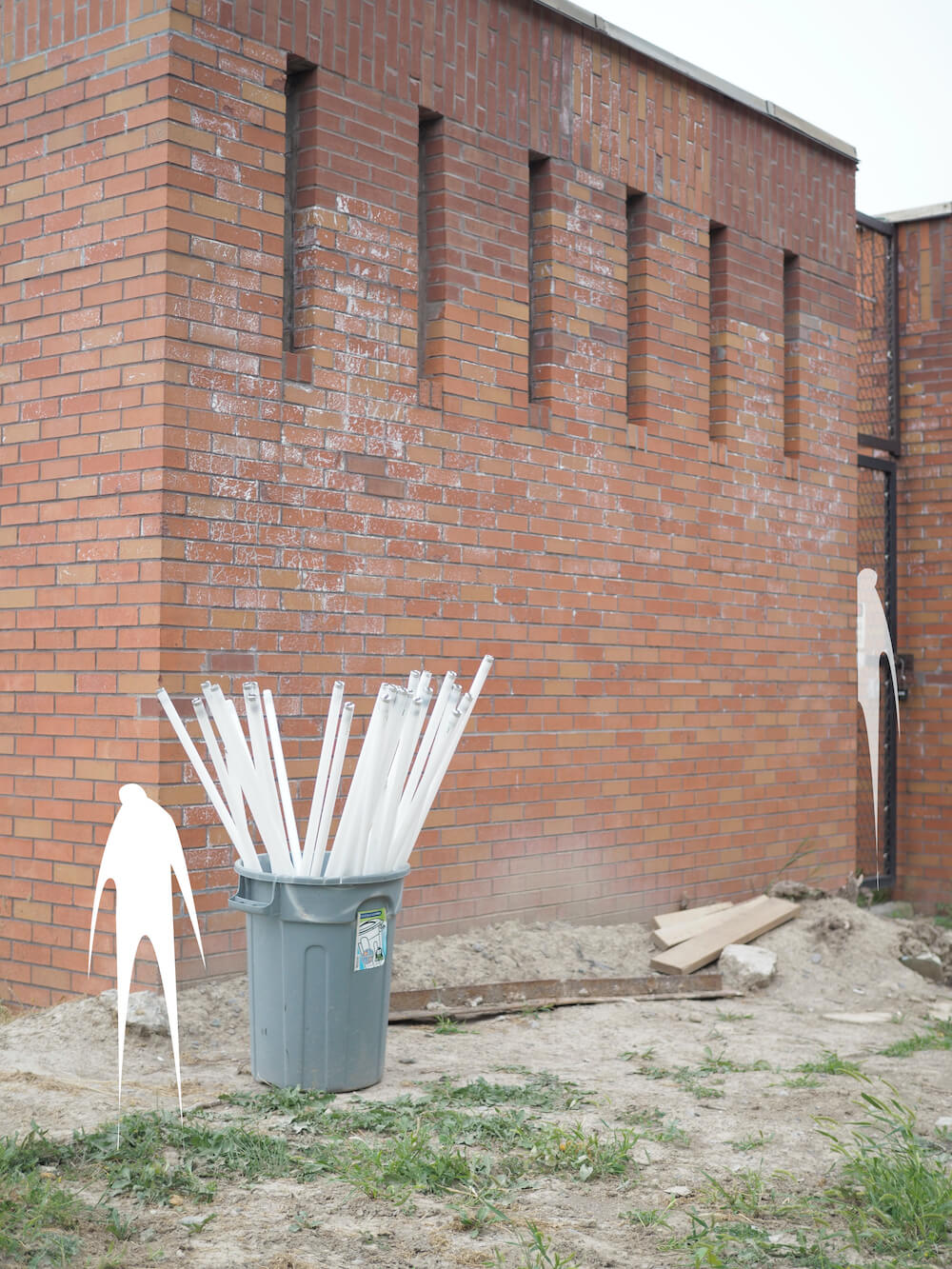 The Developer hires an Architect and a Planner.

7. Developers often work with realtors to find a financially optimal unit mix – information which influences the design of a condominium development from the start.  The project’s larger societal impact is often disregarded.

8. One of the building design’s main drivers is the maximization of condo unit numbers.

9. Most development projects in Toronto require a pre-application consultation with the City. During these meetings, the developer, the architect and the planner will present their drawings, and the City will decide whether or not to support the development.

10. This is usually in response to zoning or planning bylaws and rarely has to do with the specific existing community.

11. This step is crucial to obtaining permits for new construction and demolishing existing buildings.

The Developer engages the Realtor in assessing what kind of units sell best. (7)

The Developer also forwards this information to the Architect.

The Architect is excited to be designing a sophisticated development in the city.

The Architect and the Planner discuss the zoning and planning bylaws affecting the project.

The Architect does their best to conform to (or ignore) the requirements set by the Municipality and the Developer.

The Architect designs with the maximum saleable square footage in mind. (8)

The Architect has little to no interaction with the Community.

The Developer commends the Architect on achieving the desired number of units within the design and on illustrating this through convincing renderings.

The Developer is pleased and presses to move forward.

The Planner coordinates a meeting with the Municipality. (9)

/ The Municipality informally “backs” the project

/ The Municipality informs the team that they need to make changes before moving forward, (10)

The Architect and the Planner coordinate a set of drawings and submit an application to the Municipality. (11)

The Municipality informs the Community about a public meeting with a couple weeks’ notice and a sign reading:

“a change is proposed for this site” 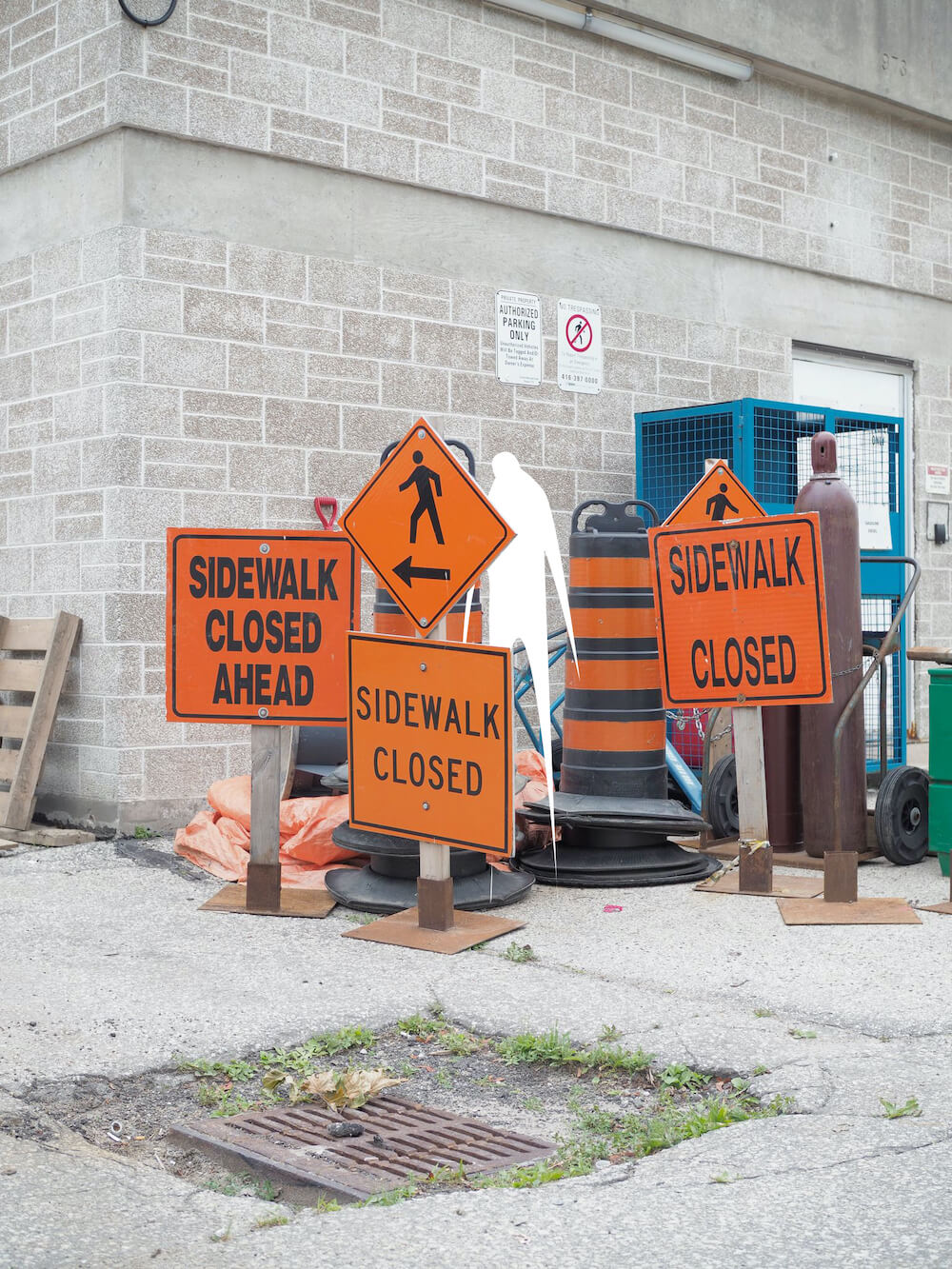 The Municipality holds a public meeting to discuss the proposal with the Community. (12)

12. The first interaction with the community, this process usually begins after the project has received the green light. Local politicians (councillors) usually act as intermediaries between the developer and the community.

13. Many communities are highly active in responding to new development with concerns around socio-economic inclusion, community involvement and engagement, and accountability.

14. From the City of Toronto’s website: Community Benefit Agreements (CBA) are a mechanism to leverage social and economic outcomes for local communities and equity-seeking groups impacted by large development projects. They are typically legally binding, contractual agreements between the developers, government and/or community. CBAs are negotiated on a project-by-project basis and are often driven by community efforts to both protect community interests and leverage the opportunity for the benefit of the community. (For an example of such a document, see the Parkdale Community Benefits Framework.)

The Community raises concerns about what the neighbourhood requires if such a development is to move forward. (13)

The Community prepares a Community Benefits Agreement for the Developer. (14)

The Developer, the Architect, the Planner and the Municipality continue to “listen” to the Community.

The project moves forward as is, with some superficial changes.

The Community writes petitions and letters to the Municipality and attempts to communicate with the Developer.

The Municipality approves the demolition and the construction permits for the Architect.

The Architect finalizes the drawings for the contractors. (15)

Members of the existing Community are evicted and displaced,

The existing buildings are demolished to make room for new construction,

The Community continues to organize and mobilize to bring on a more equitable process,

The Community is slowly “moved” out.

The shovels hit the ground.

The Architect supervises the construction site and works overtime to make sure everything is built according to their drawings.

The Architect does whatever they can to keep the Developer pleased.

The Developer is pleased.

The Architect is pleased.

The Developer moves on,

the Realtor moves on,

the Planner moves on,

the Municipality moves on,

the Architect moves on,

16. As real estate investment returns to urban centres – bringing with it related amenities like upscale retail and coffee shops – upwardly mobile populations also return. This wider demographic shift towards whiter and wealthier constituents in turn creates new (sometimes re-branded) neighbourhoods that are much less affordable than before. 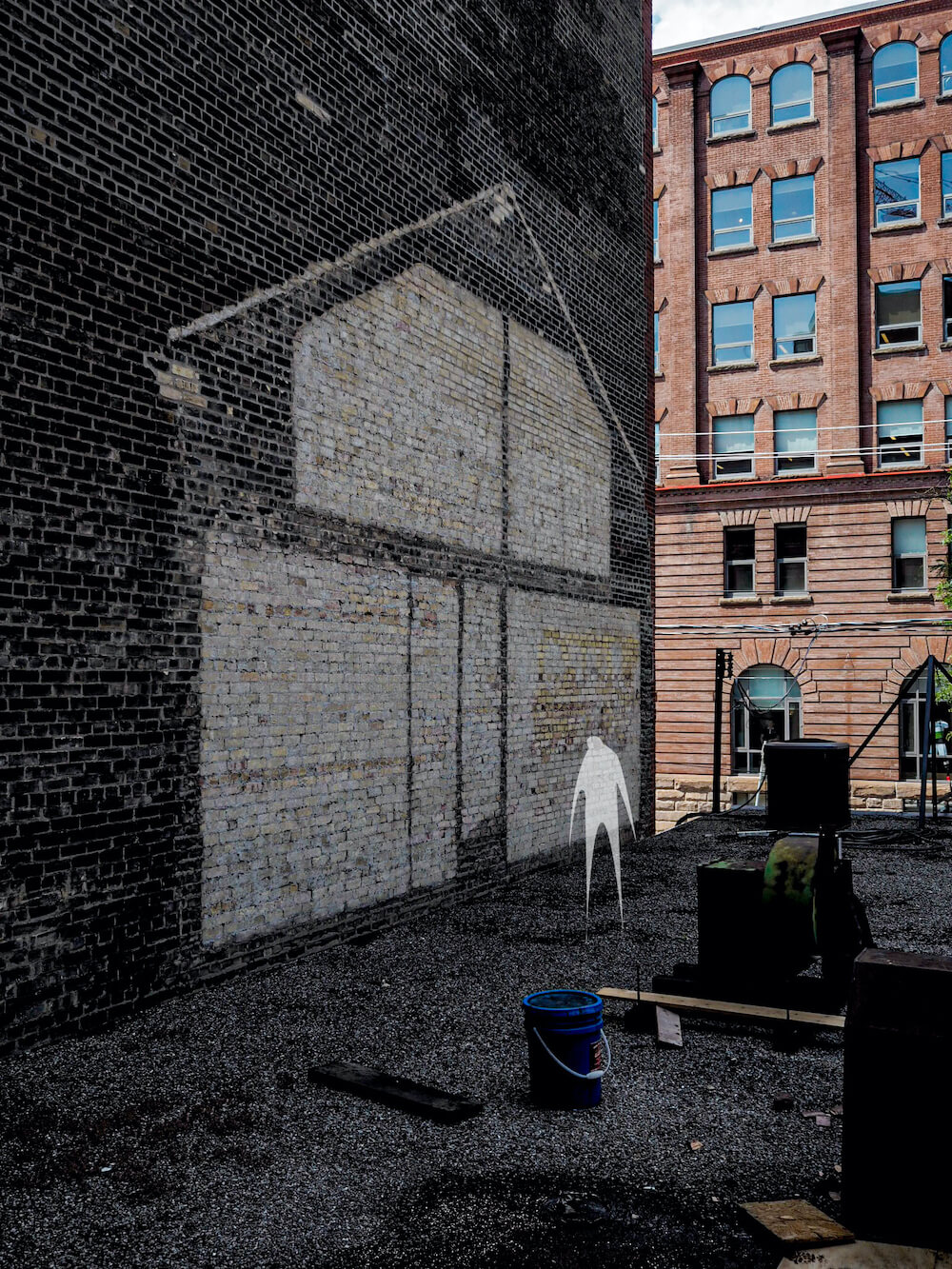 The developer is just one character in this story of housing injustice, as is the realtor, the planner and the municipality.

Architects play a role in urban inequities and gentrification, too. We are not apolitical service-providers – we need to hold ourselves accountable for the part we play. Rather than confusing community involvement with NIMBYism, we should encourage it. We can advance our processes of consultation, particularly when engaging equity-seeking communities, by bringing everyone to the table at the beginning of the conversation. This is no easy process – we need to bring on experts in the field to walk us through it.

The story can change: Architects can play a more active role in advocating for more equitable urban development. While I often hear stories that – like the one above – end with displacement, there are other, more inclusive possibilities for development that can lead to new beginnings. The alternative story will require that every character question and rethink their role, their power and their agency in order to leverage their position to support housing justice in the neighbourhood they are building. This story can end with hope: the hope that comes from looking deep within every single one of our practices and actively designing a better world for all. But it requires that the community is introduced as a starring role in the narrative – and in the first chapter.

Images were a collaboration between Reza Nik and photographer Antonio Fernandez.

Reza Nik is an architect, educator and an artist. He is the founding principle of SHEEEP, an experimental architectural practice working through an equitable lens.  He teaches at the University of Toronto’s Faculty of Architecture, Landscape and Design.  Reza is also one of the founding members of the Toronto chapter of the Architecture Lobby (TALTO) and currently acts as the Research and Education coordinator. @rezaniik

Antonio Fernandez is a Toronto-based photographer who explores light, and movement through socio-spatial contexts around the city.  @pxl.push

The main characters that bring about the gentrification of racialized neighbourhoods are often hidden. Architect Reza Nik raises the curtain on how they work together – and how marginalized communities can play a bigger role.