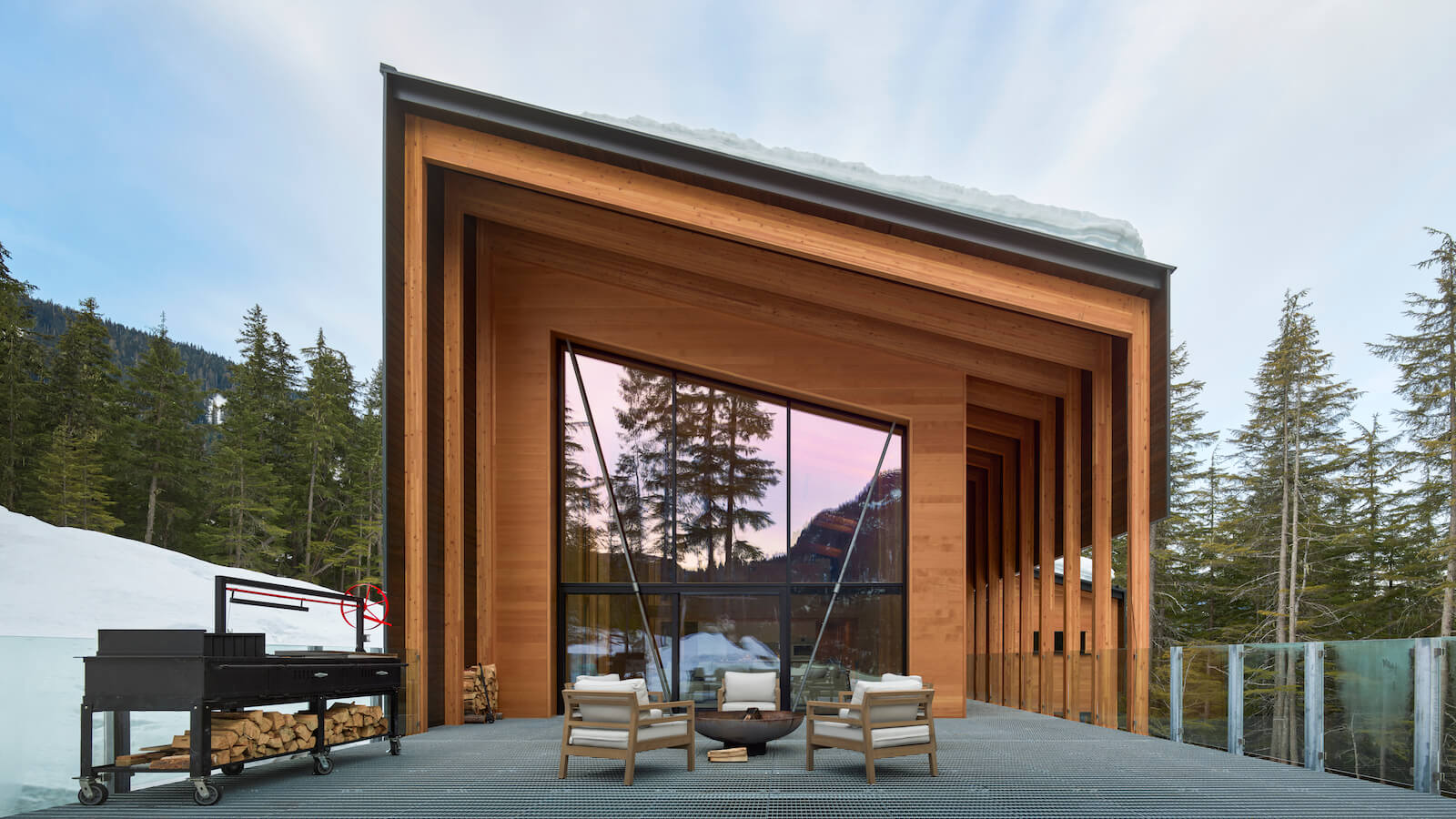 In the province’s Lower Soo Valley, architects Perkins and Will and eco-conscious developer Bruce Langereis have built a prototype intended to both withstand and harness the elements.

To reach SoLo, a sensitively designed all-wood house prototype not far from Whistler, British Columbia, you first have to ascend a winding forest service road shrouded by unbroken stands of fir, hemlock and western red cedar trees. A drive over uneven gravel brings you to the top of a knoll where, after rounding a bend, the trees part and suddenly you face an imposing wall of darkly shimmering solar panels. More than 30 metres in length and punctuated with two-storey cathedral windows, the residence bears a passing resemblance to the snow sheds that emerge, also unexpectedly, along the province’s mountain highways to steer sliding snow packs out of drivers’ way.

As you approach the main entrance, the house’s mass timber framework reveals itself. A series of glulam posts and beams reach beyond the gently asymmetrical roofline to form a covered walkway that leads out to a large terrace and sweeping northeast views of the lower Soo Valley, Soo River and Coast Mountains beyond. There are no blinking lights off in the distance. No light pollution of any kind. The closest neighbour is 15 kilometres away, the village of Whistler another 10. Despite its otherness amid the roaming deer and territorial Steller’s jays, the structure is designed to yield to its surroundings, combining Passive House building principles and low-energy systems that don’t use fossil fuels with a limited set of prefabricated materials selected to minimize on-site construction. Critically, the house and its auxiliary building absorb more carbon than they produce. It is less a vision of the future than a way to stabilize the present. 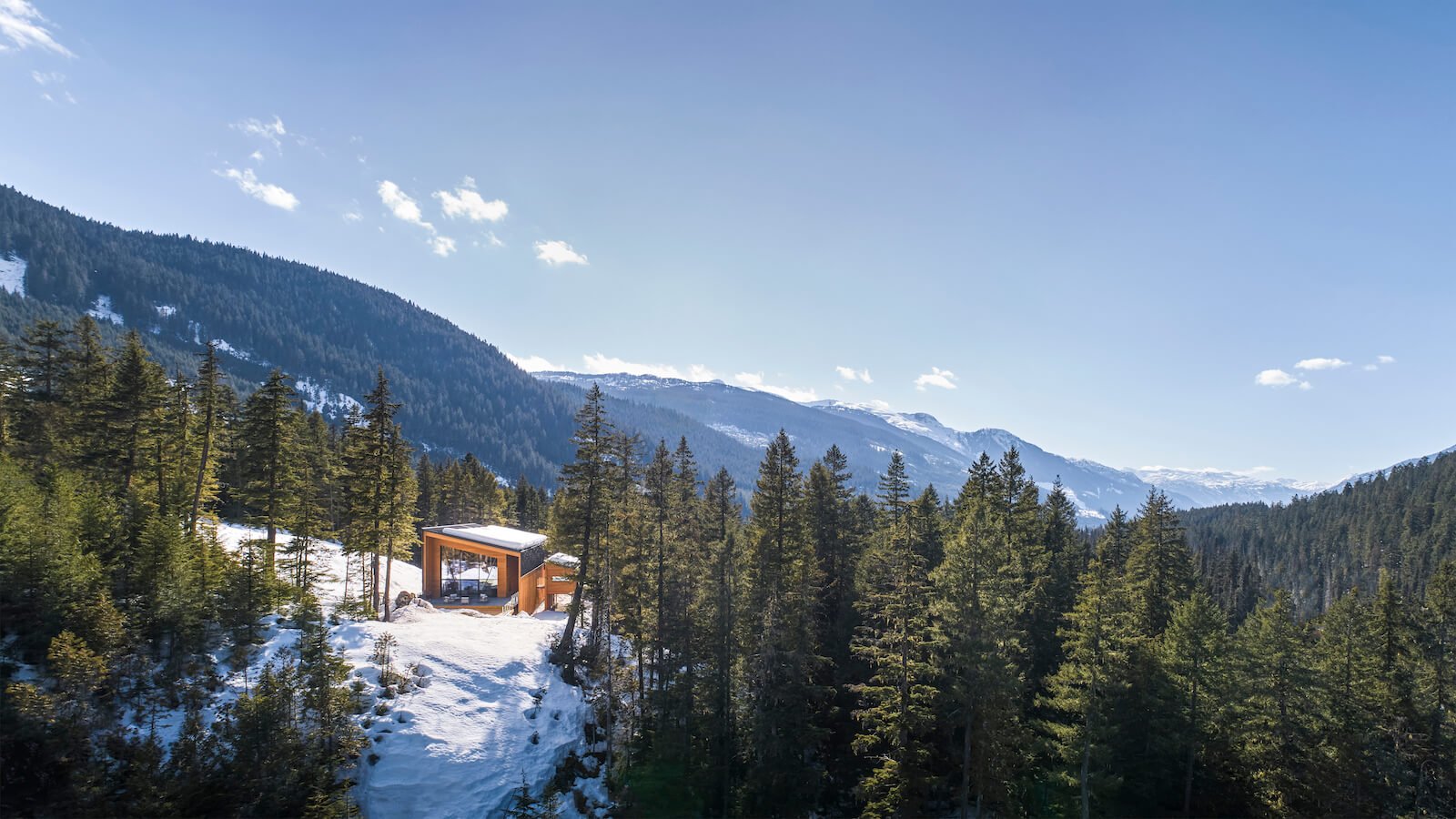 Designed by Perkins and Will for the Delta Group, SoLo is elevated about three metres off the ground to minimize site disruption and allow snow to accumulate in winter. The Passive House model is envisioned as the first in a range of eco-homes for a future alpine village. 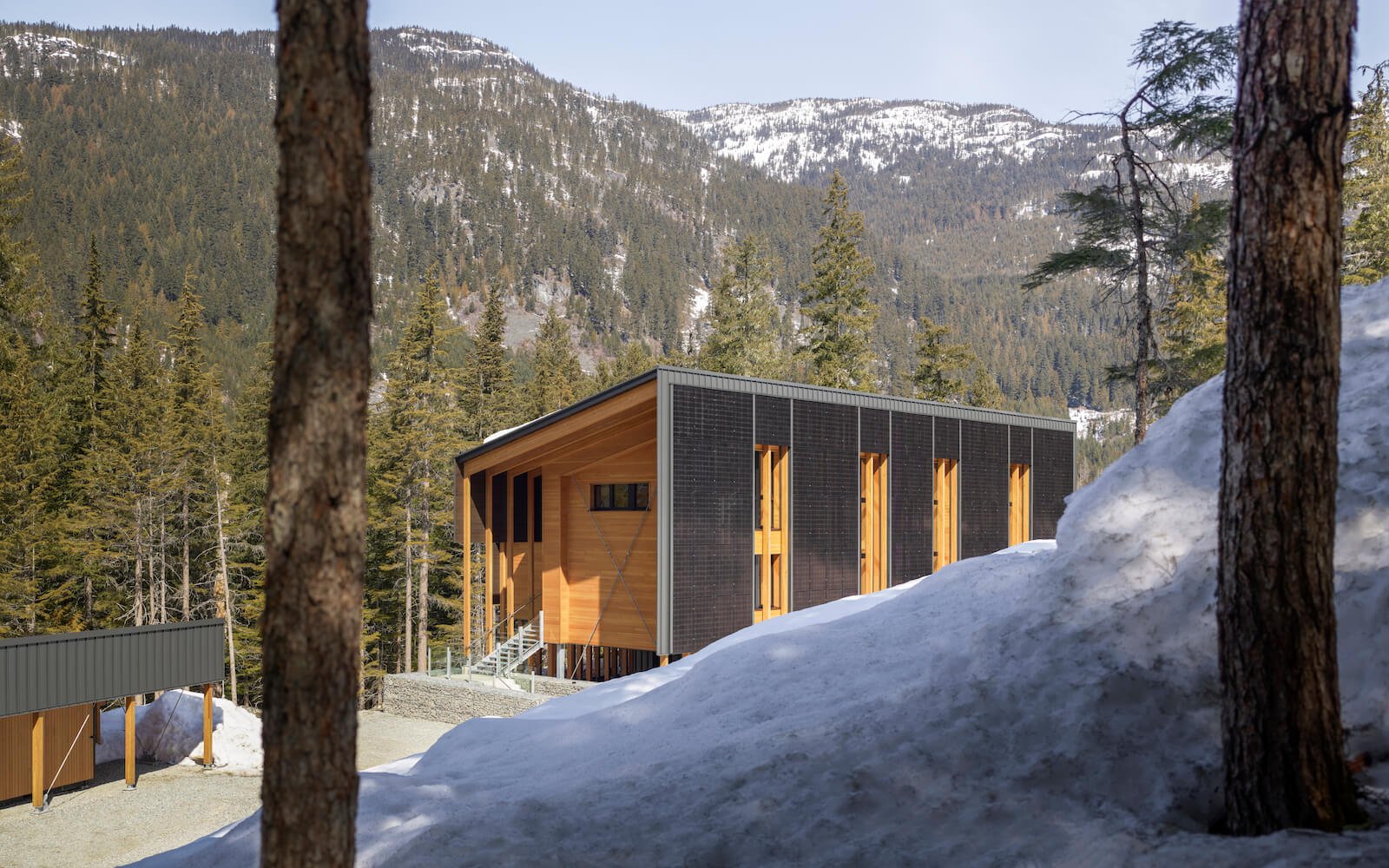 “Everybody talks about pipelines and cars, but buildings are a big part of the [carbon emission] problem,” says Bruce Langereis, president of the Delta Group, which commissioned architecture firm Perkins and Will to design and execute the project. “We are living in an age where there is an alternative.”

Langereis, who has been a key player on Vancouver’s real estate scene for more than 35 years, contributing several residential towers to the city’s glass and concrete skyline, readily admits that he had been slow to act on climate change or embrace green building practices until about five years ago. Now he calls his work on climate-positive buildings “a crusade.”

The developer seeks counsel from noted environmentalists such as David Suzuki and, last fall, marched with Greta Thunberg when she visited B.C. “I am so far down the rabbit hole,” he laughs. “I used to develop buildings and think about who was going to live in them and what they were going to sell for. Now I think, what’s the impact? I have to.” 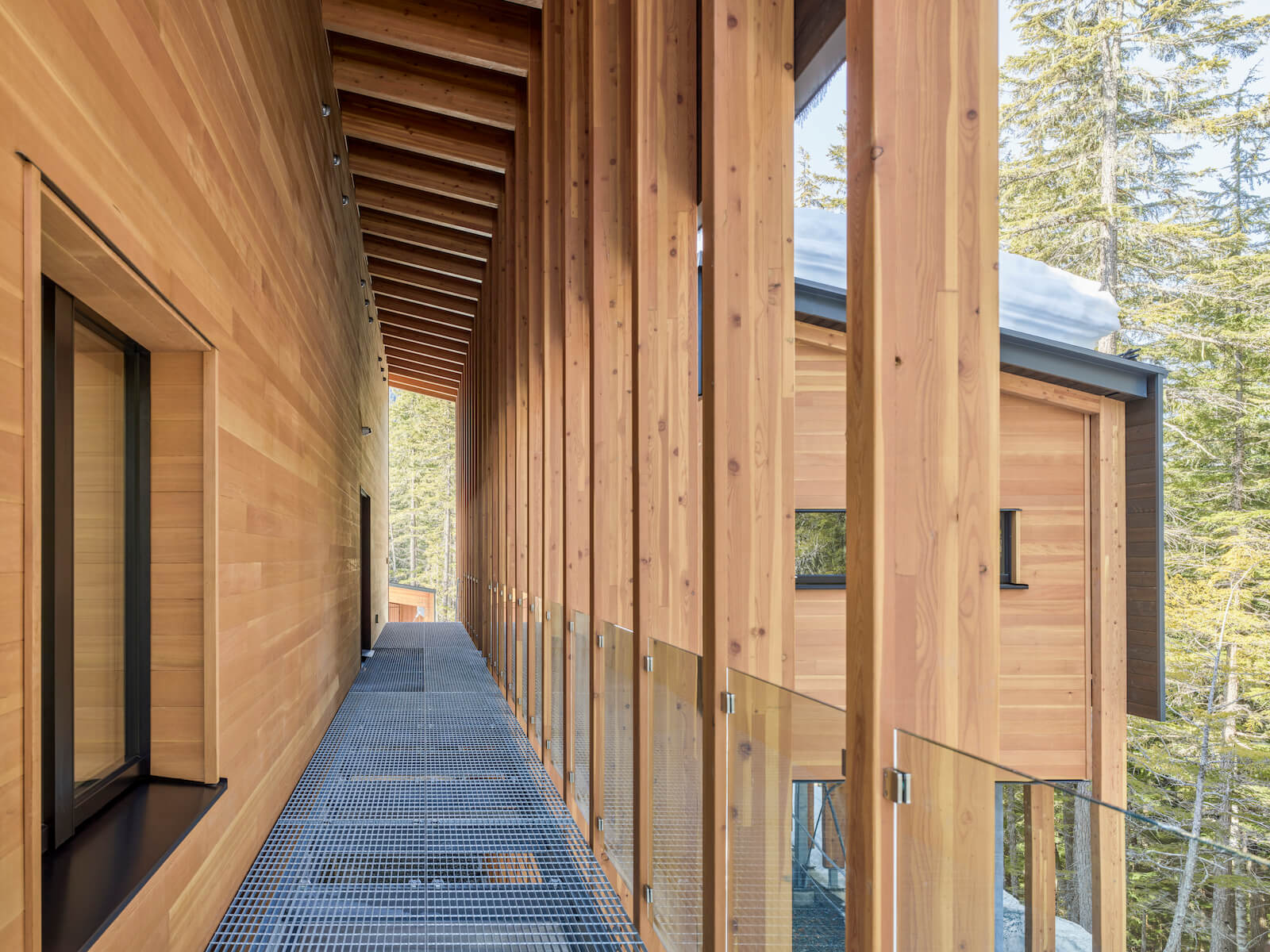 A colonnade of glulam posts and beams veils a walkway that links the home’s main entrance to a terrace offering valley and mountain views. Inside, an open-tread staircase is characteristic of the nearly all-wood palette, applied without nails or adhesives. On one side of the house, a wall of solar panels spans more than 30 metres. 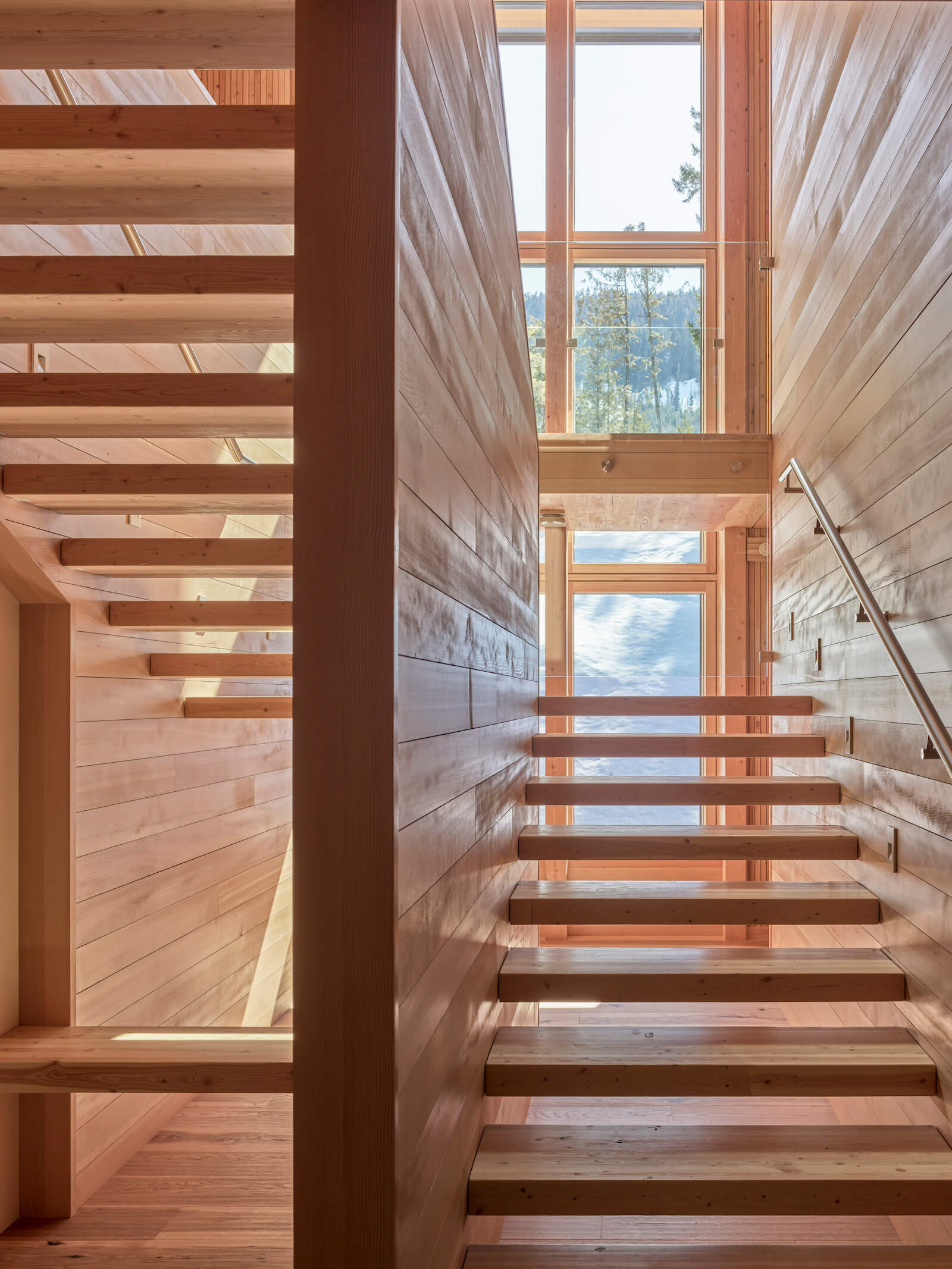 Stepping inside SoLo, the limited material palette — wood on wood on wood — has an immediate immersive effect. Solid prefabricated panels of Douglas fir cut into varying widths wrap the walls and ceiling and are fastened together using only hardwood dowels — no nails or adhesives. An open-tread staircase bisects the main floor with a principal bedroom and bathroom to the west and, to the northeast, a streamlined open kitchen and living space fronted by a massive floor-to-ceiling window measuring more than six by six metres. Upstairs are two more bedrooms and bathrooms as well as a second living area open to the ground level. 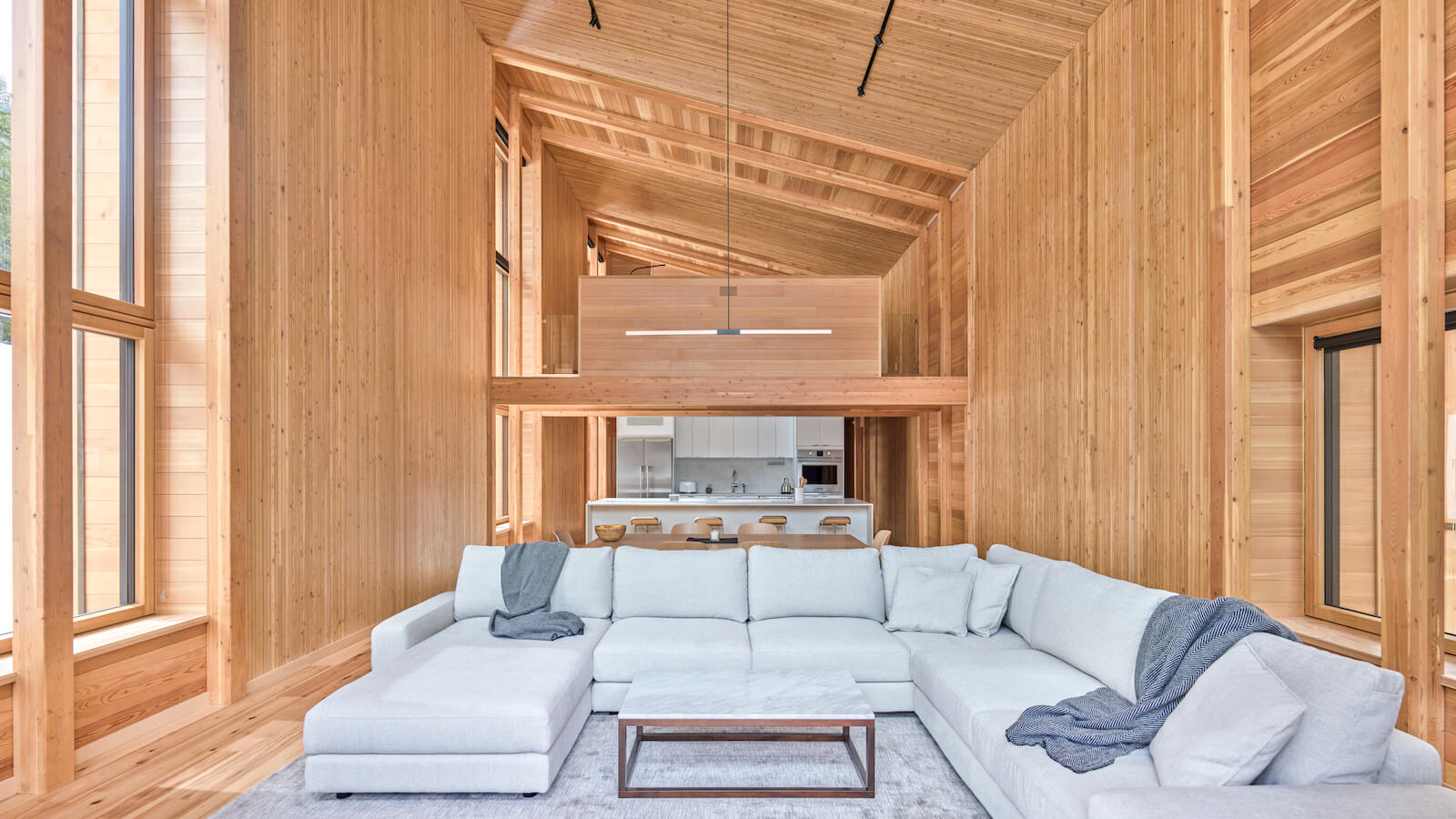 An open kitchen and living area takes up most of SoLo’s ground floor, underneath which lies a water collection, filtration and treatment system, as well as a geothermal heat exchange that supplies the home with heat and hot water. 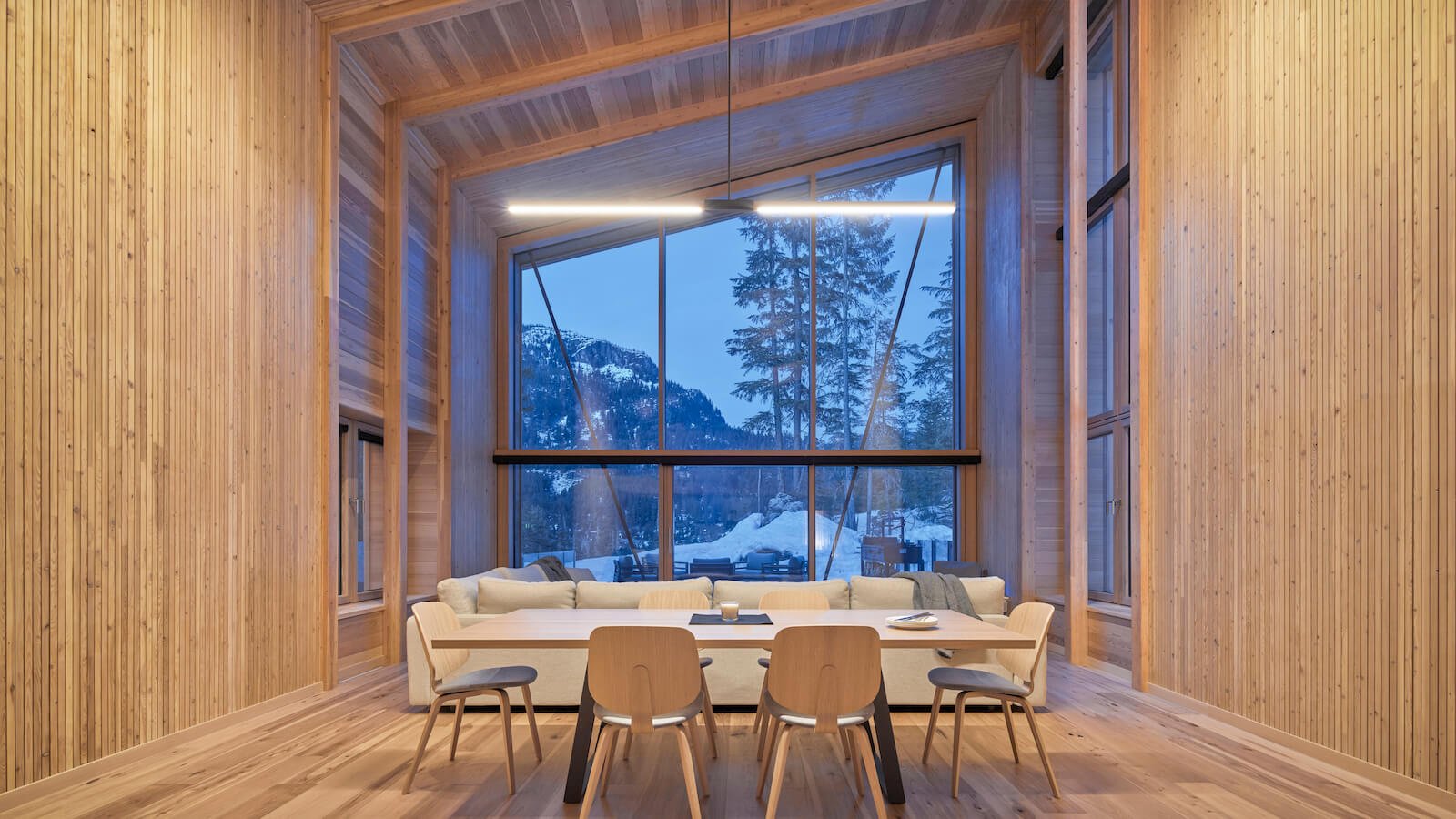 “The intent was to limit finishes in the building as much as possible,” says project architect Alysia Baldwin. “It was a very conscious choice to authentically showcase the types of mass timber products used throughout the home.” Eventually, the Delta Group aims to build an entire alpine village in the surrounding area using similar Passive House principles.

Although Langereis is reluctant to forecast the future (a long consultation process looms), he imagines a community comprising a range of homes, all zero-emission, with a house manufacturing facility on site. For the moment, though, SoLo will be informing the other projects that the Delta Group and Perkins and Will have on the go in B.C.’s Lower Mainland, currently as a demonstration project and — perhaps one day — as just an ordinary house.

In the province’s Lower Soo Valley, architects Perkins and Will and eco-conscious developer Bruce Langereis have built a prototype intended to both withstand and harness the elements.