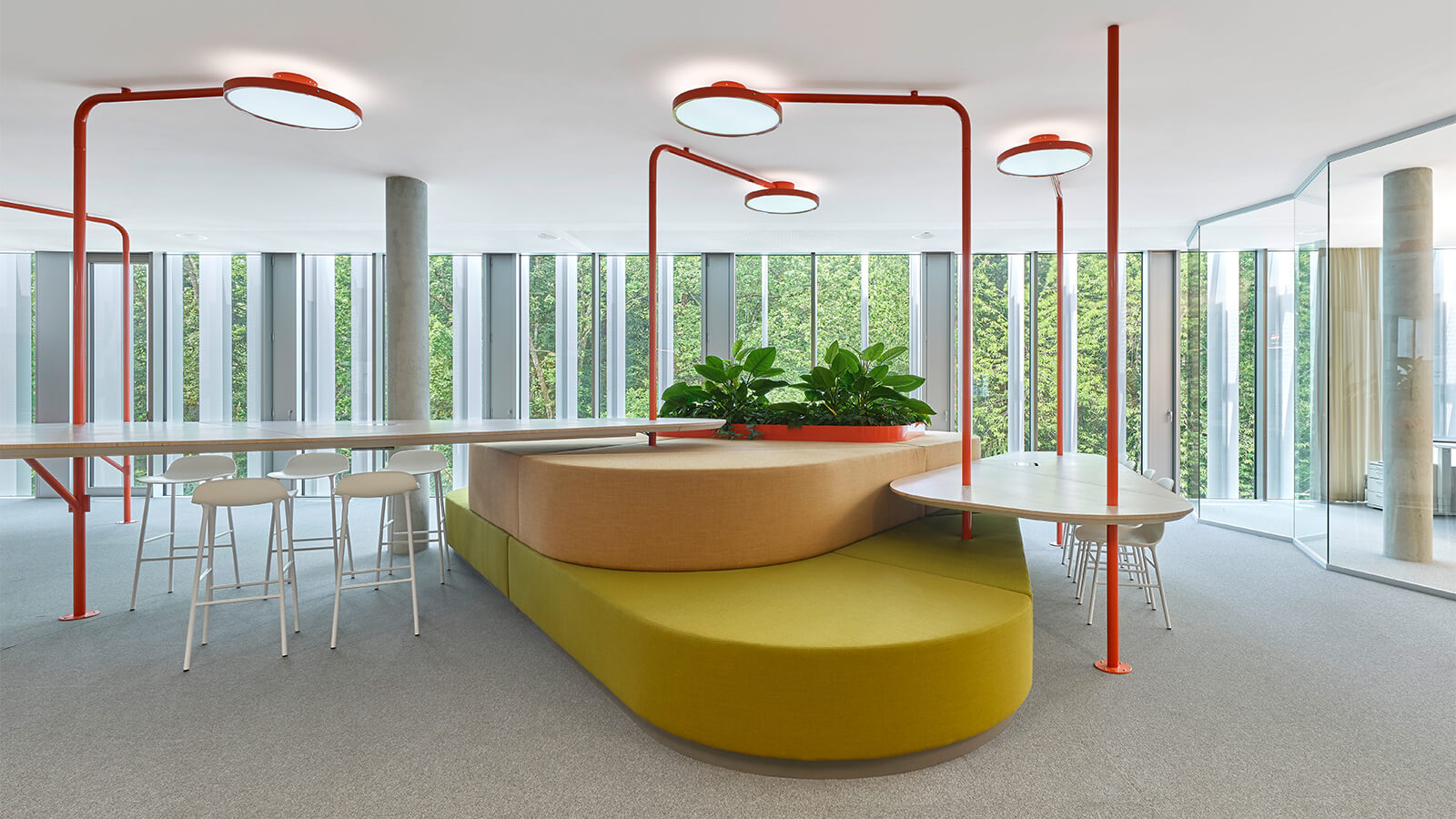 Bosch Automotive Steering’s New HQ is Ahead of the Curve

The buttoned-up German auto industry isn’t immediately what comes to mind when one thinks of innovative workplaces. But after some soul-searching, the top brass at Bosch Automotive Steering outside Stuttgart made a decision to shake up their office layout with the help of local firm Studio Alexander Fehre.

“The work culture in German automotive companies has been changing,” explains Fehre, who was tasked with converting the interior of a building originally designed by Wulf Architekten into the company’s new development campus. “The teams at Bosch used to work quite rigidly in their different departments, but they’re moving to a more interdisciplinary approach and lowering hierarchical barriers.” 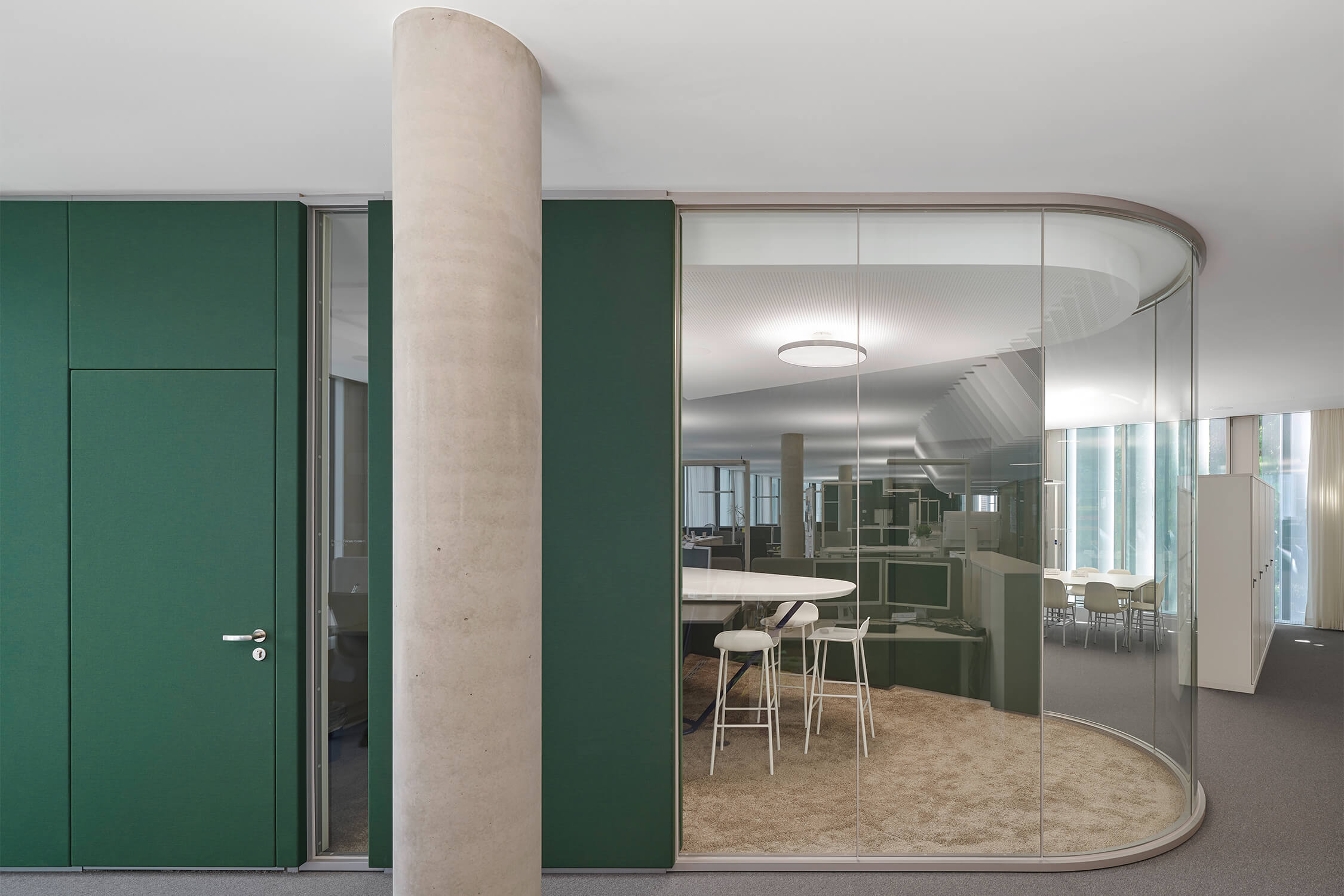 Previously, the interiors were sleek but sterile, housed within a pair of monochromatic multi-storey towers with triangular footprints connected by a ground-floor atrium. “Our brief was to interrupt the minimalist white scheme and bring in a livelier concept,” Fehre says.

The intervention loosened the client’s necktie, so to speak, transforming the interiors into a playful, colour-saturated environment complete with multi- use spaces, flexible meeting areas and ample room for creative diffusion (plus, now, physical distancing). 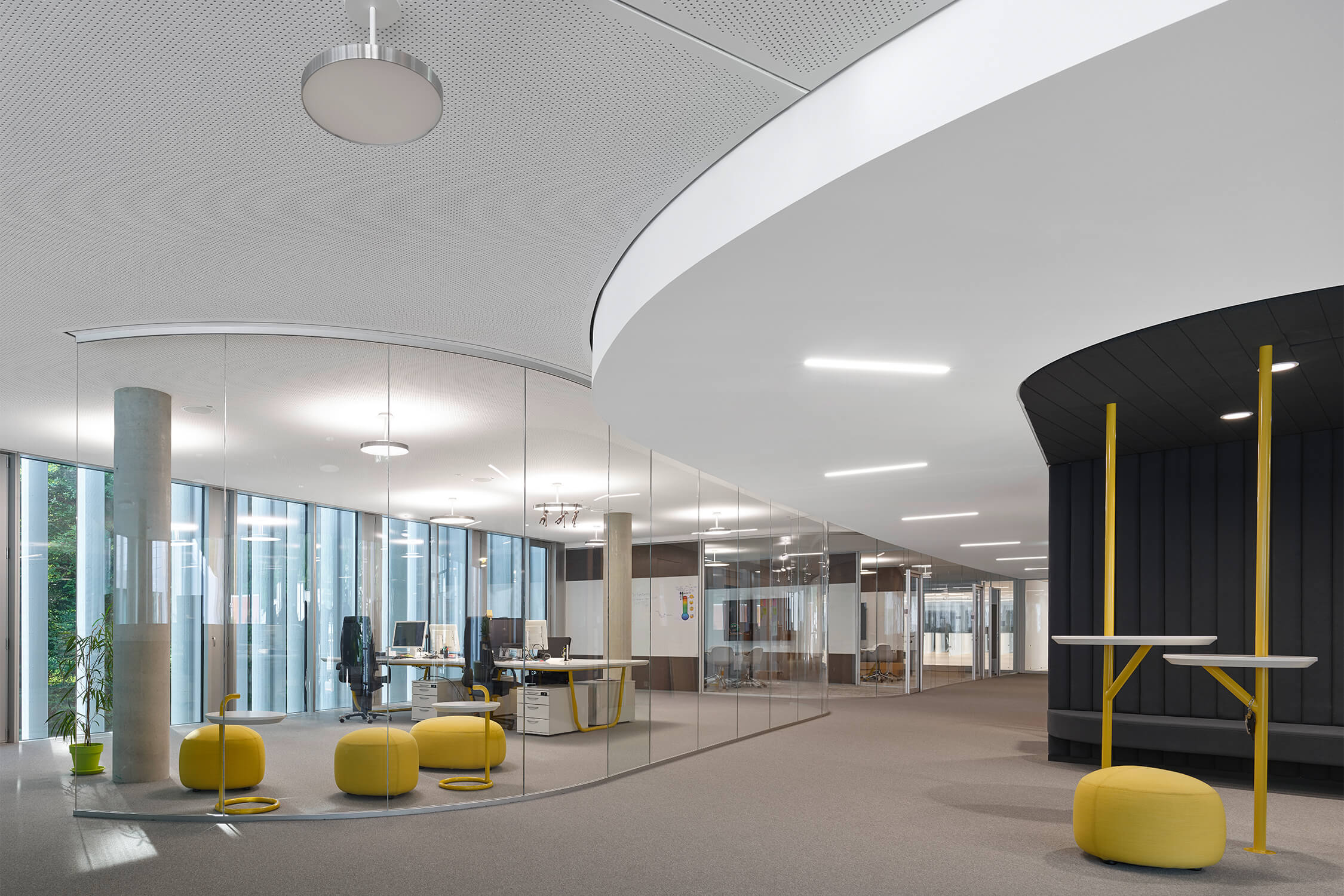 First on the design docket was devising a seating solution for Bosch’s board members, whose previously rigid work set-up — involving separate offices, each with an assistant posted outside — no longer gelled with the evolving realities of their jobs. “The board members had only 15 minutes per meeting before they were on to the next,” recalls Fehre. “They didn’t need separate offices; it made more sense to share a space.”

The new scheme clusters board members in one partially open office with a communal table and glazed walls to encourage communication. Their assistants sit close by, within a panopticonesque bank of desks affording them sightlines into the visitor waiting area and their bosses’ office. Nearby, bar tables support standing meetings and informal briefings. 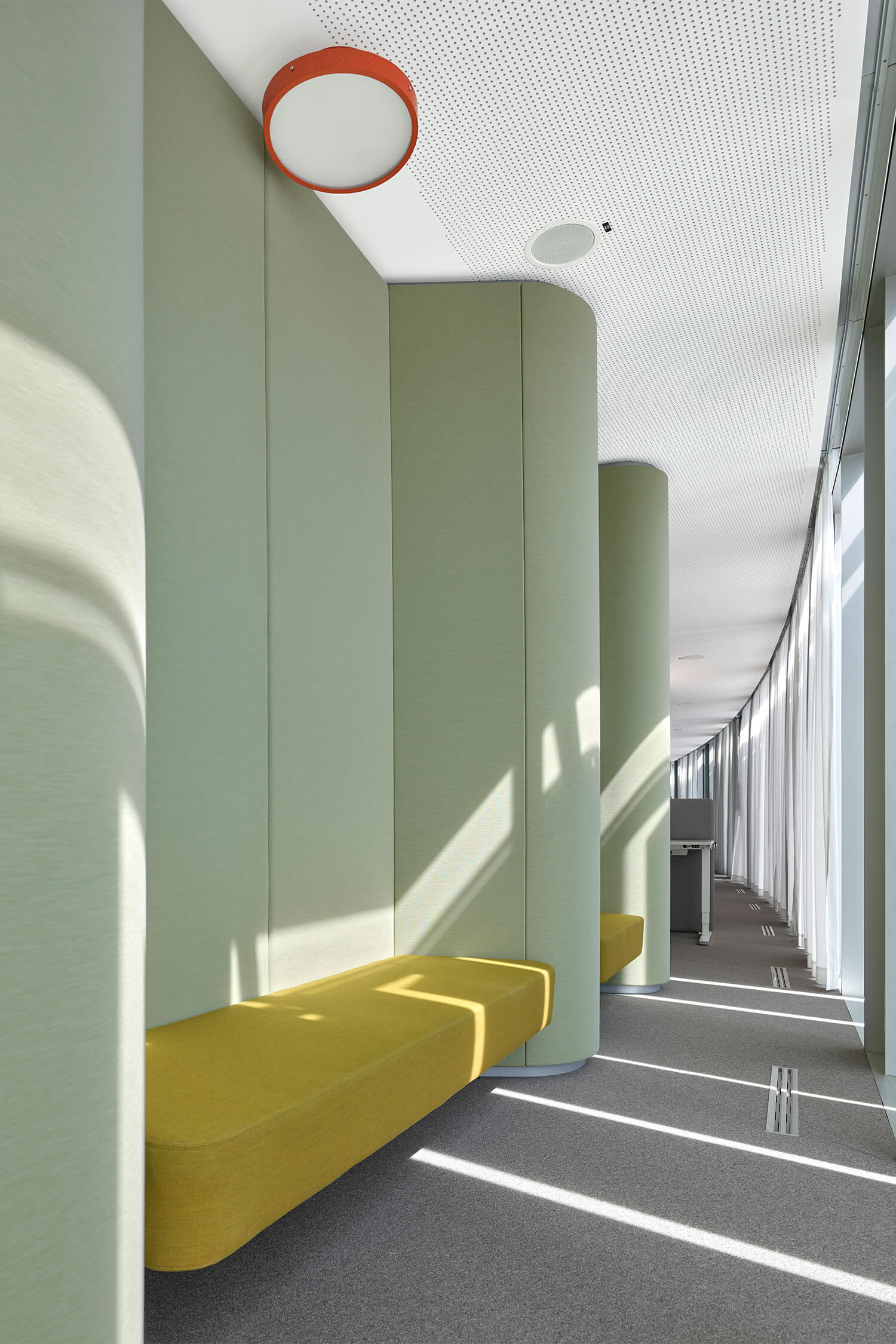 Benches and seating areas were built into the capsule’s window- facing wooden frame, allowing workers to pause and gaze into the greenery outside.

The other major challenge was the building’s unusual floor plan: an oblique triangle surrounded by 360-degree convex floor-to-ceiling glazing, which Fehre describes as “beautiful, but not easy to furnish.” The design team set desks back from the window, creating a circulation route around the perimeter and uninterrupted views onto the lush forest just outside. At each curved apex, a capsule was installed for flexible meeting spaces or private study rooms; benches built into the capsules’ window-facing wooden frames let workers stop and gaze into the greenery beyond.

To boost interdisciplinary work habits, breakout zones with kitchenettes, shared tables and benches were added at the centre of each floor. “Employees,” Fehre notes, “have their own desks, but congregate in communal areas for meetings and to chat.” A playful colour scheme enlivens the corporate atmosphere and reflects the headquarters’ verdant setting: Chartreuse, mint, vegetal greens and yellows are spread out among the floors, set off by light fixtures in brighter contrasting hues. 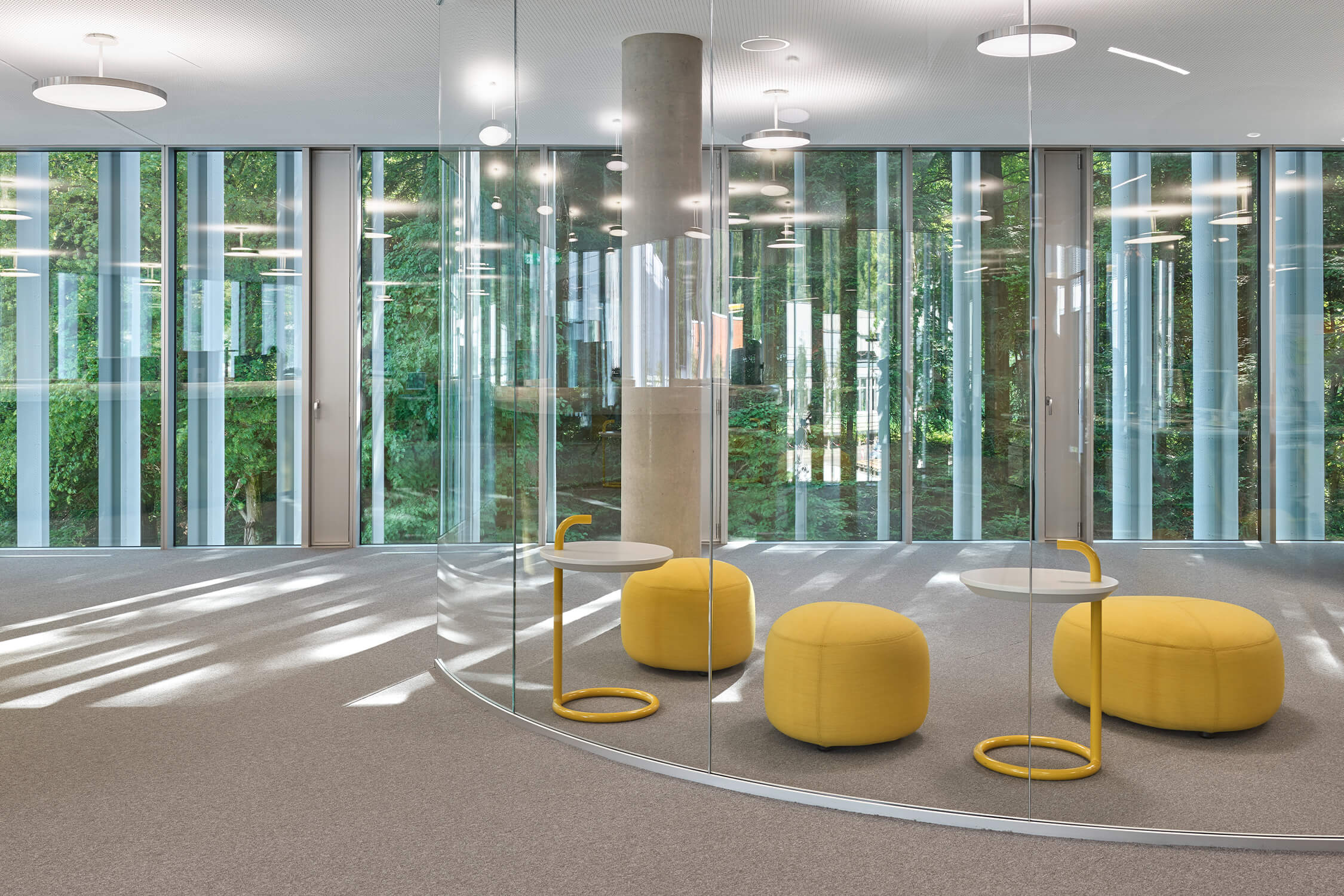 Glass-wrapped capsules were installed at curved apexes along the circulation route for flexible meeting spaces or private study rooms.

In the end, the corporate stuffiness has largely been shaken out of the premises, but a sense of German practicality still pervades. “We kept the organization very loose,” says Fehre, “but also very usable.”