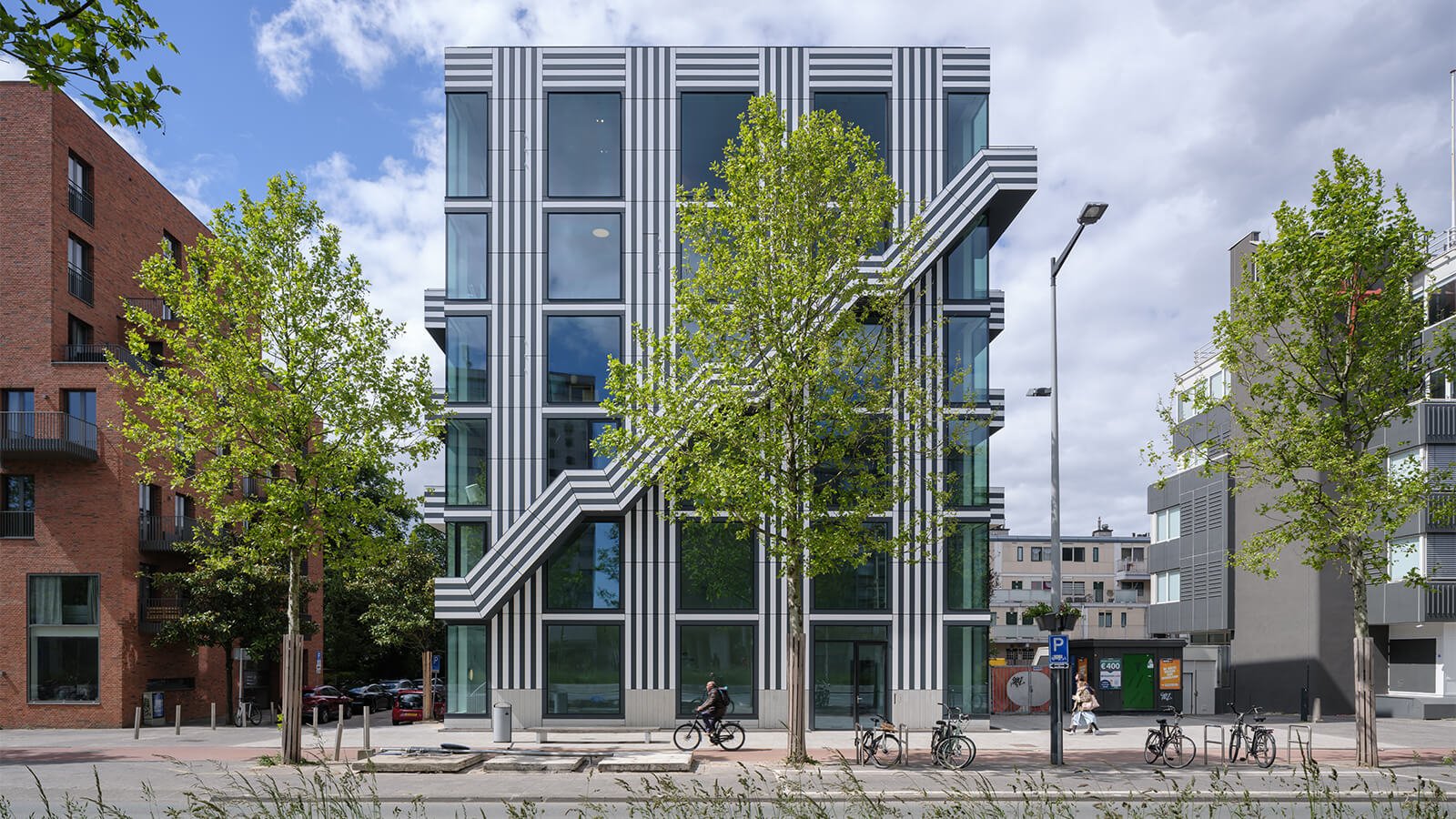 Thonik’s Amsterdam HQ Was Designed with Future Uses in Mind

To fashion its sustainable, ultra-versatile headquarters – intended to evolve with the city – the creative studio teamed up with MMX Architects.

For a creative company, one way to avoid the intractable cycle of moving to an affordable neighbourhood, helping to earn it a hip cachet, then being priced out and having to start all over again is to buy your own property. Or, better yet, to build it from scratch so you can knit in the sort of tailor-made spaces you really need. 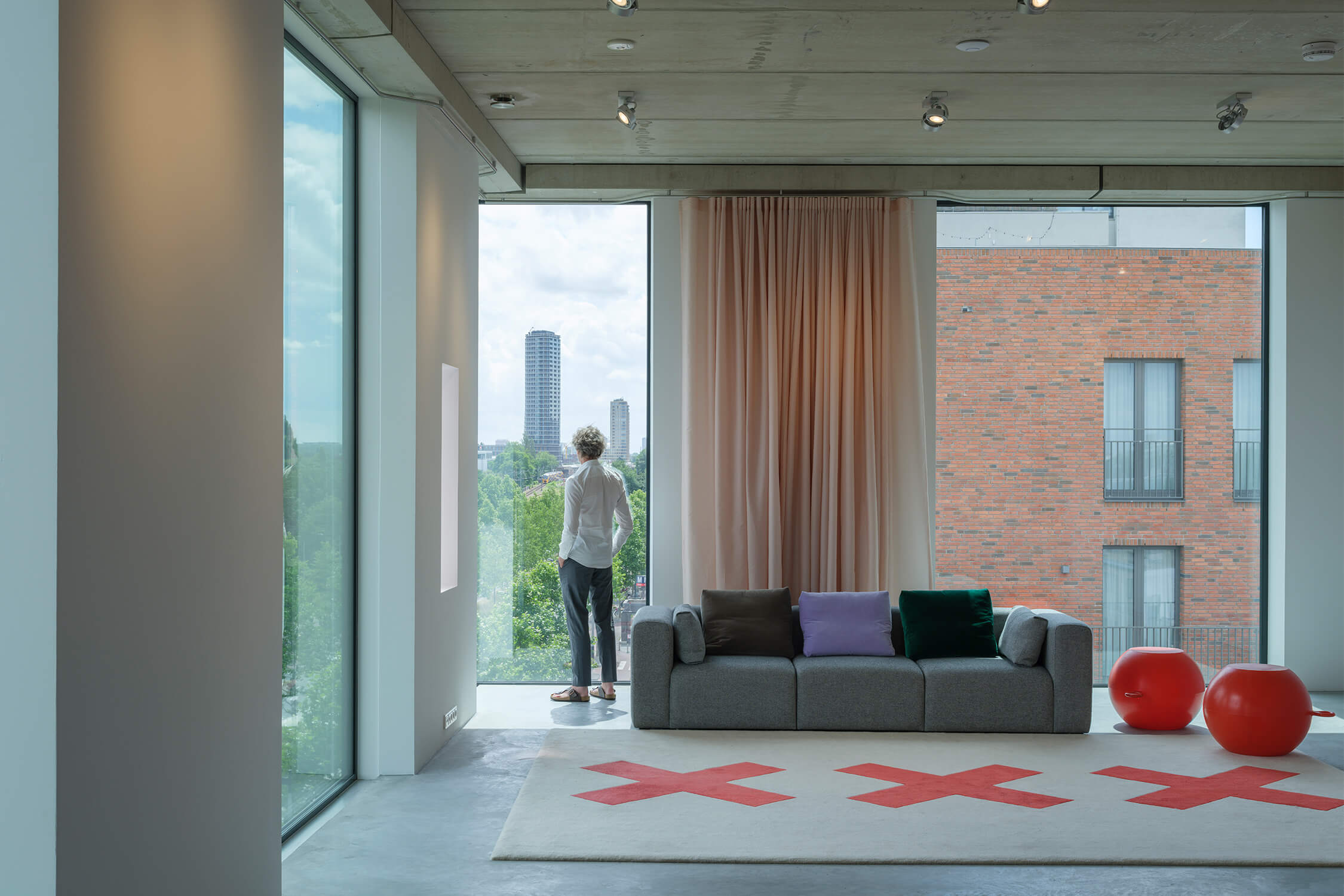 The triple- glazed floor-to-ceiling windows, treated with a special UV coating, are hung with curtains by Bas van Tol for Vescom.

That’s what Amsterdam-based graphic design studio Thonik has done — twice. In the late 1990s, it transformed a nondescript hidden inner courtyard in the east of the city with a colourful home-cum-studio designed by Dutch architecture practice MVRDV. Then came outright gentrification. “Everybody wants to live and work in that area now because it’s an oasis in the middle of the city,” explains Thomas Widdershoven, who co-founded Thonik with Nikki Gonnissen.

In 2008, the pair leased another small plot of land on a wide postwar boulevard in the centre of Amsterdam to build a larger studio for their growing team. It took longer this time — 12 years, in fact — but earlier this year, they finally moved into their new six-storey HQ. The slender building, which dazzles with its highly graphic grid-like facade (inspired by the Mexcellent typeface and logo made for the 1968 Summer Olympics in Mexico City), was designed by Widdershoven in collaboration with Arjan van Ruyven of Amsterdam-based MMX Architects. 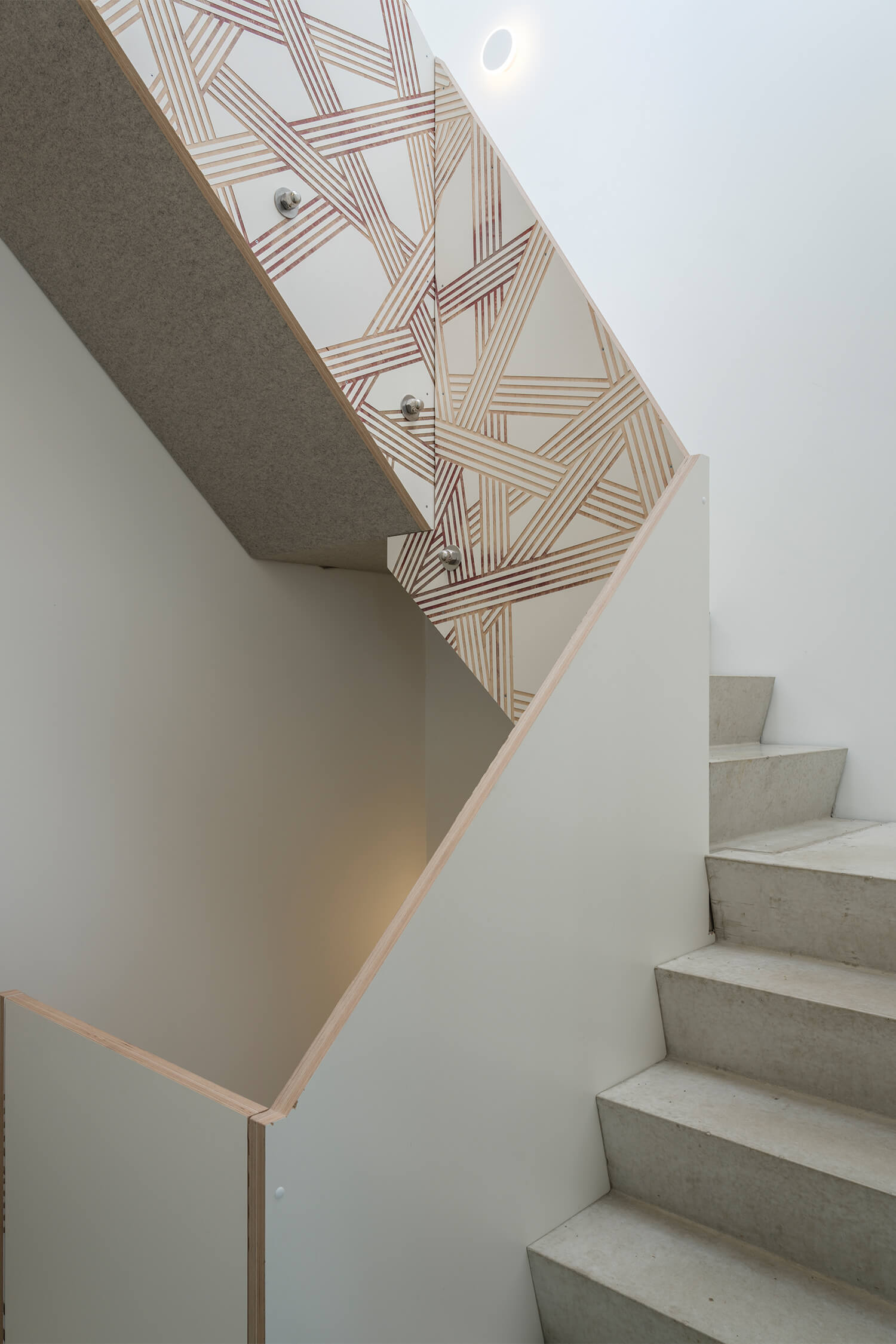 Riffing on the facade, the staircase’s pink linework pattern was designed by Envisions, a studio run by Sanne Schuurman.

The grey and off-white cladding is made from a high-pressure laminate called Trespa that, while not conventionally used in upscale architecture, wows with its deep and sophisticated tones. What’s more, the recyclable material has a small carbon footprint: It’s largely made from trees grown near the manufacturer’s factory in the southeastern part of the Netherlands. 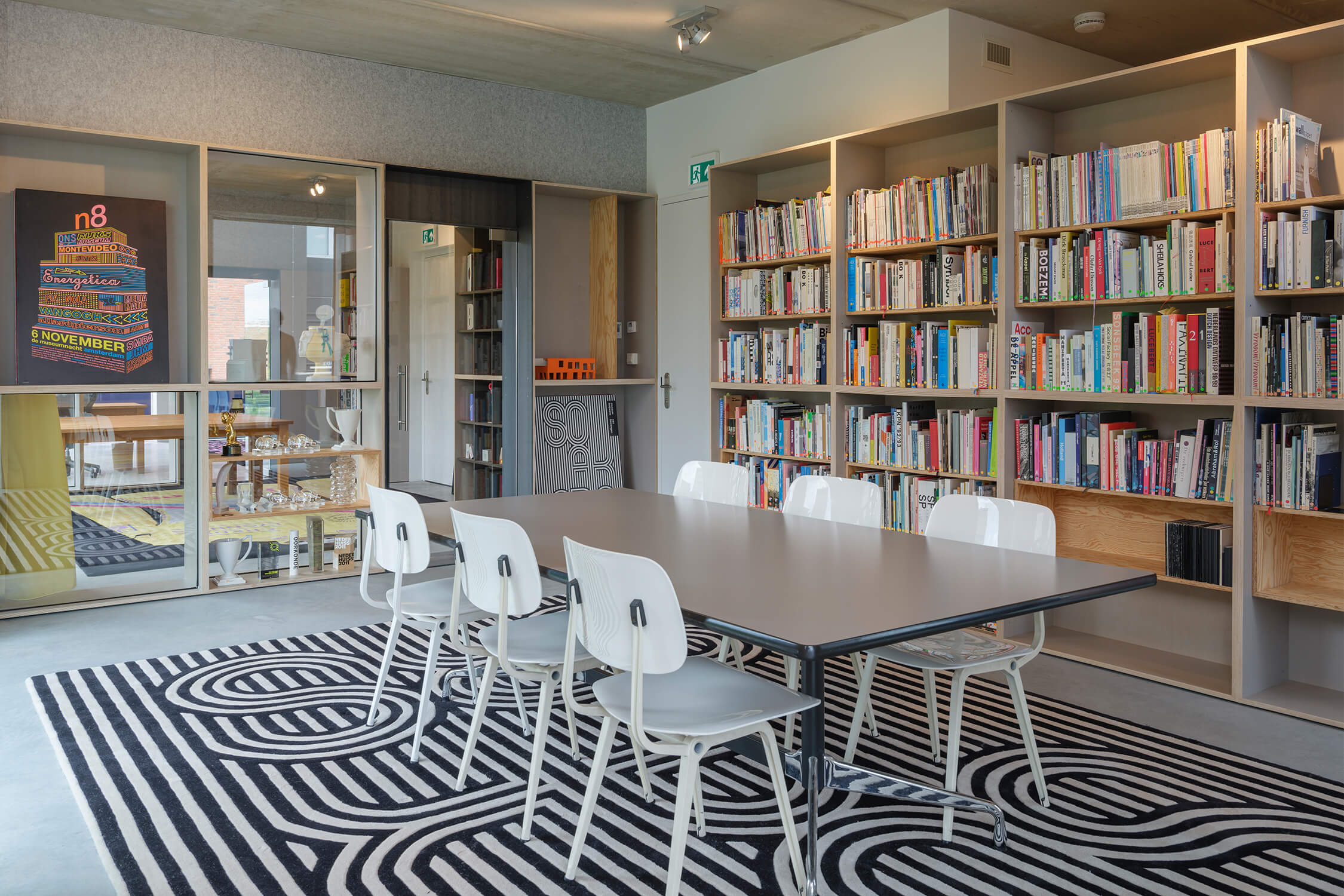 The graphic design studio created the bespoke rugs (such as this one echoing the facade), while fellow Dutch talent Bart Guldemond designed the cabinets and room dividers — all of which made their way over from Thonik’s previous location.

Inside the building, Thonik chose to erect as few internal walls as possible to allow for maximum flexibility. Instead, the company opted for cupboards and bookshelves as room dividers, all brought over from its previous studio. Upcycling as an ethos was central to the interior outfitting. “We also re-used the tables Richard Hutten designed for our second studio in 2000, the woollen carpets we made for an exhibition at the Shanghai Museum in 2008 and the modular kitchen we bought for our third studio in 2009,” says Widdershoven. 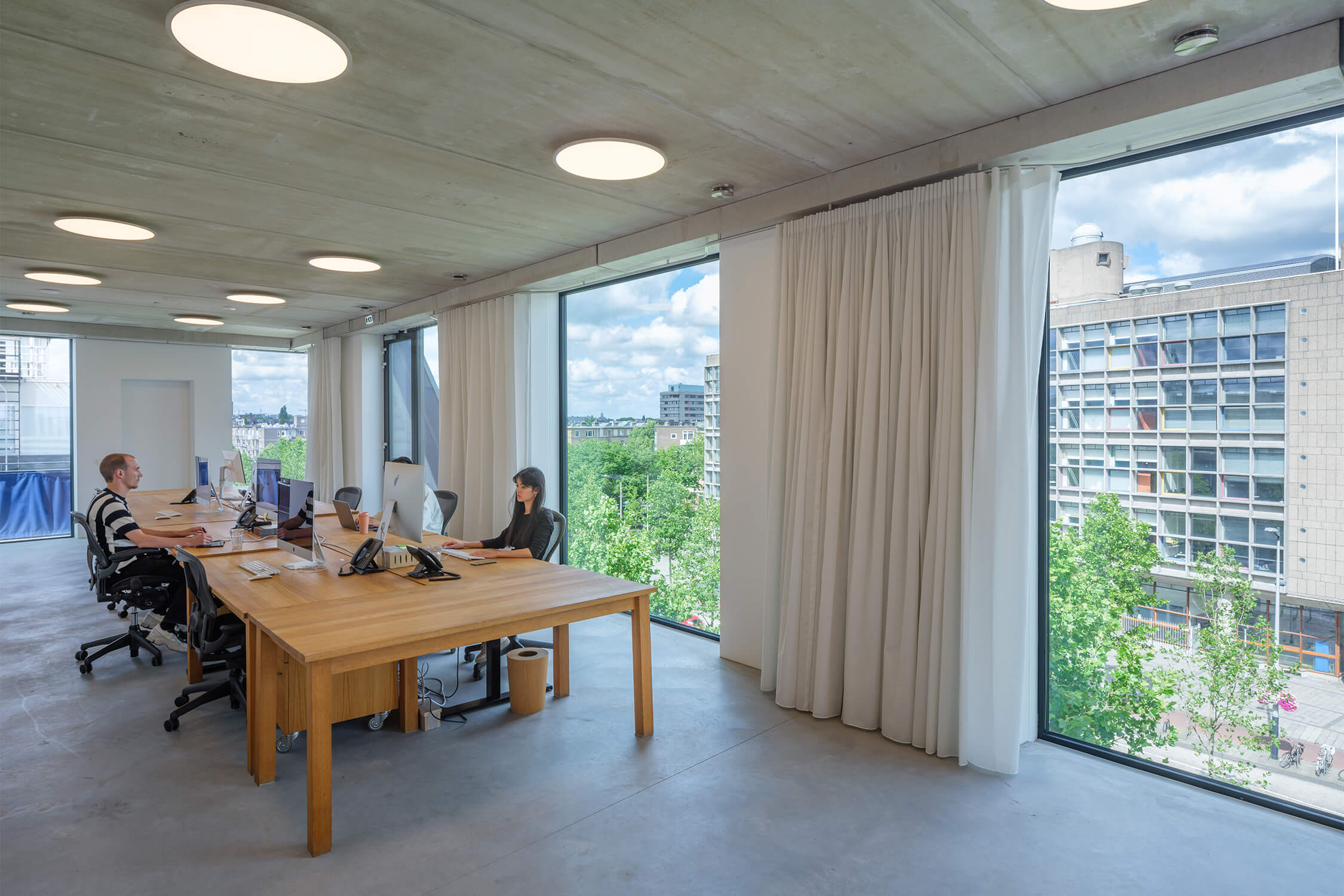 The light fixtures throughout, including these bold ceiling-mounted discs, were sourced from the companies SLV and AEG

Even with these ready-made elements, it took over a decade to complete the project. And the reason for that was Thonik’s insistence that the neighbourhood’s zoning adapt to the build- ing’s mixed-use, loose-fit and future-ambiguous nature. “It took a long time, but we managed to convince the city government that an experimental non-restrictive zoning plan should be developed on this site so the building would remain relevant in future scenarios,” says Gonnissen.

For the moment, offices occupy the upper floors and a restaurant and bar the ground and first floors (post-COVID-19, the top floor and rooftop terrace will open as an events space), but the company foresees the potential for a switch to residential and retail at any time. 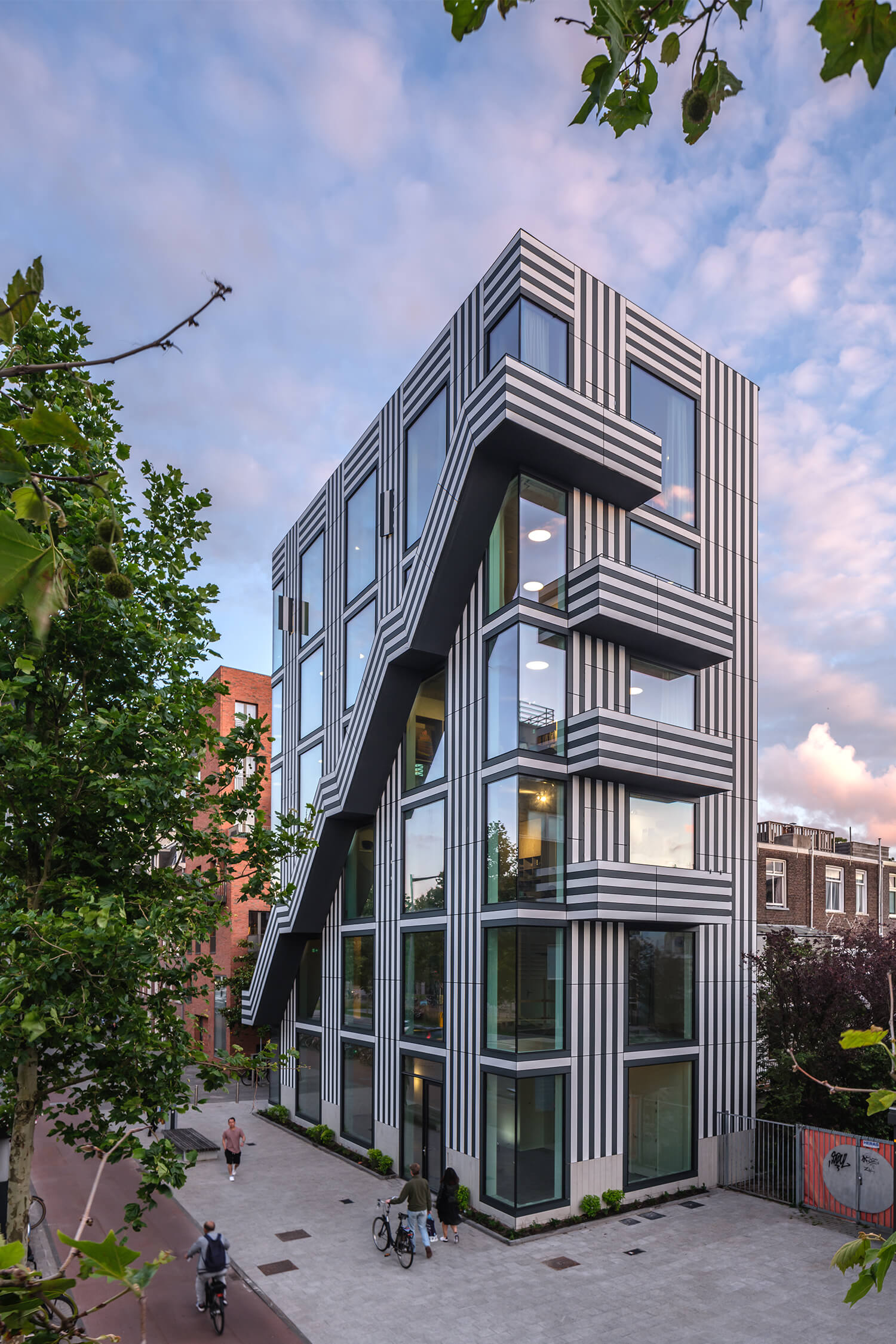 In a realm riddled with red tape, this achievement cannot be underestimated — and it was arguably only possible because, as amateurs, Thonik took an approach that was uninhibited, collaborative and open-minded. To Gonnissen and Widdershoven, future-proofing isn’t just about internal flexibility, circular materials and innovative technologies, but also something as basic and unglamorous as giving bureaucracy a nudge in the right direction.

To fashion its sustainable, ultra-versatile headquarters – intended to evolve with the city – the creative studio teamed up with MMX Architects.