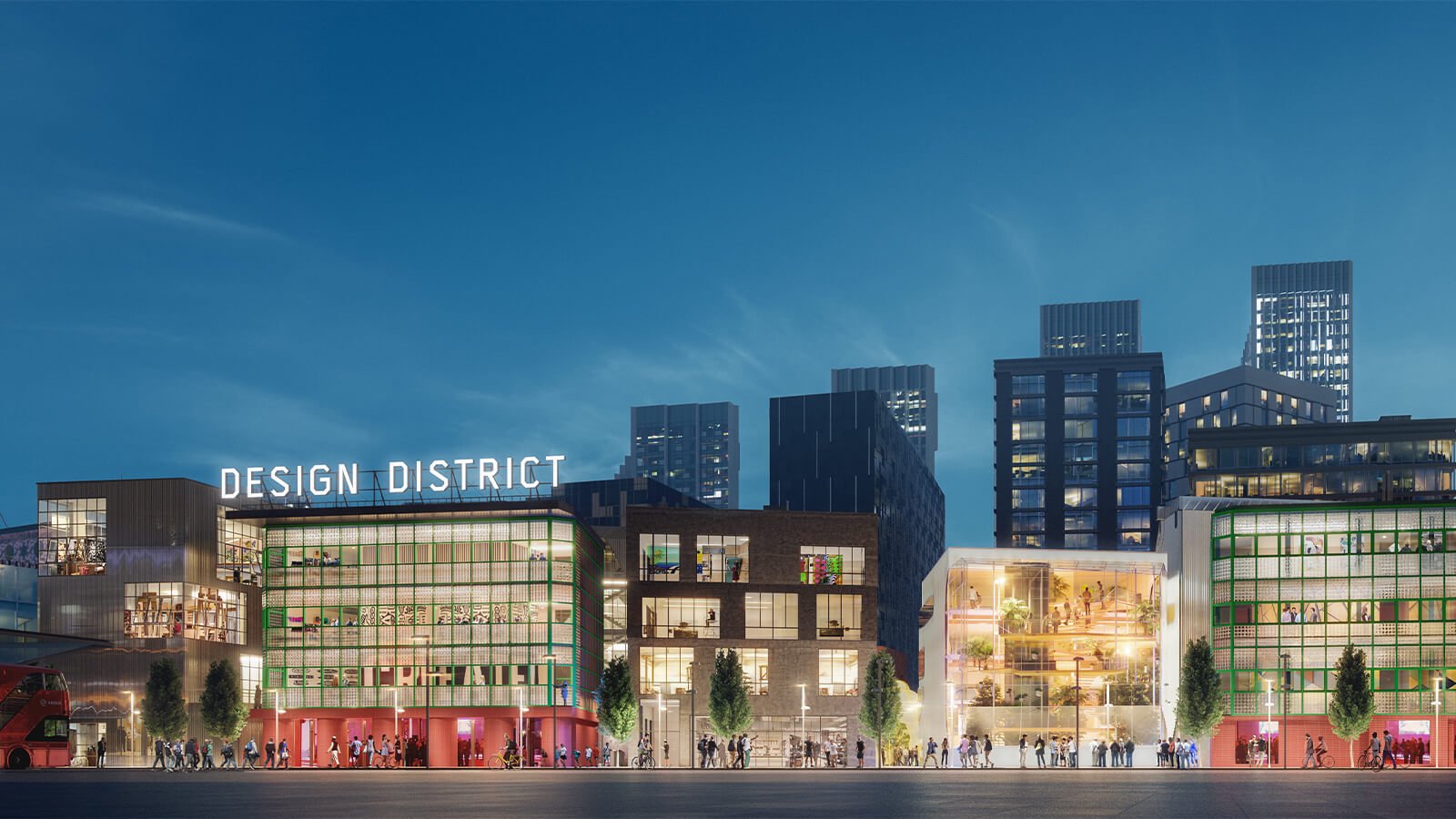 In London, a Co-working Development Celebrates Strength in Diversity

The multi-use Design District development boasts offices by a range of firms to give local creatives a permanent home.

A ground-hugging caterpillar that glows at night. A regal edifice inspired by Venetian palazzi. A multi-tiered structure topped with a sports court and wrapped in a translucent veil. The architectural diversity of Design District — a London development boasting contributions by SelgasCano, David Kohn Architects and Architecture 00, to name just a few — integrates a wide range of visionary forces into one densely packed area.

And its program has much the same purpose. Intended specifically to provide co-working and office space for creative industries, the project not only helps bring artists and designers together, but looks to solve a recurring problem of working in an exorbitantly costly city: having to pack up and move to new studio space whenever a neighbourhood becomes too pricey. 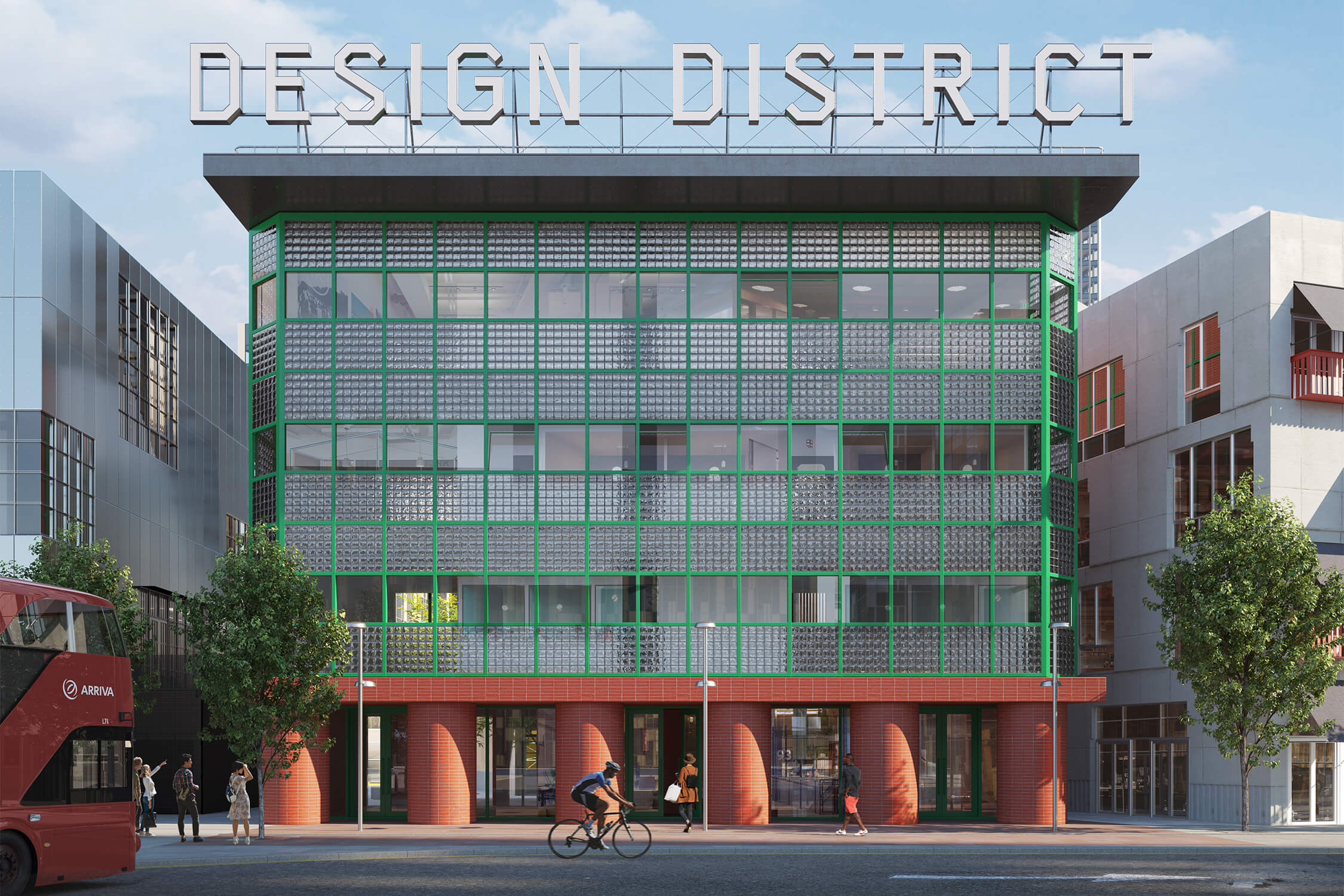 Led by local firm HNNA (formerly Assemblage), Design District has creativity in its DNA, thanks to a roster of firms that contributed two buildings each to the development.

“It’s expensive, time-consuming and disruptive,” says Helen Arvanitakis of the continuous cat-and- mouse game creatives must play. “The time and effort it takes to relocate every two or three years could be spent coming up with bright ideas and building their businesses.” As director of the new district, Arvanitakis is intent on addressing the gentrification-driven problem, at least in the British capital. 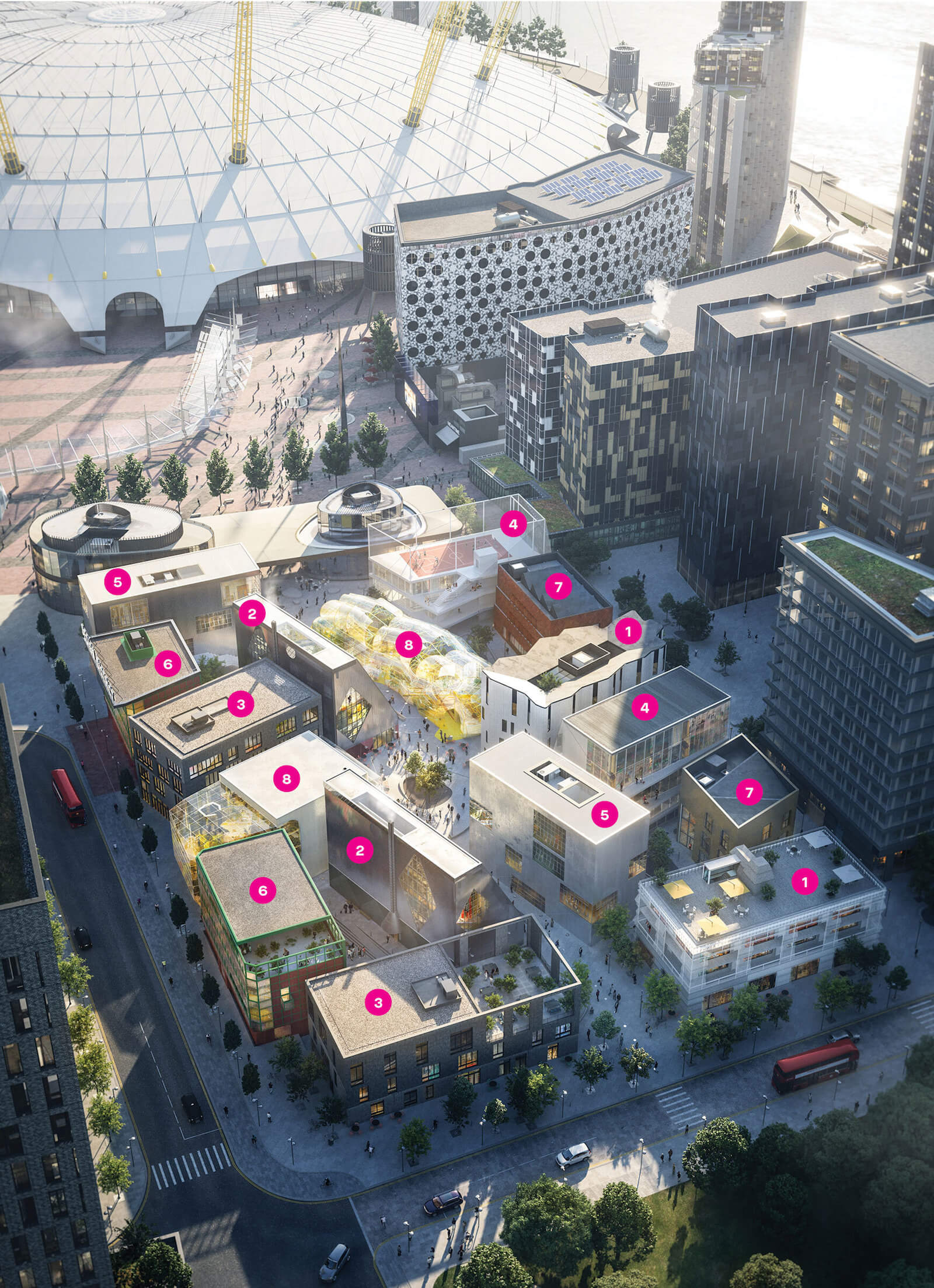 Formerly the managing director at Tom Dixon’s design studio, Arvanitakis joined Design District in the summer of 2019 to oversee a new co-working and leasing model that would give tenants security and stability. Dubbed the On/Off Office, the paradigm differs from conventional co-working set-ups by allowing lessees to rent a space (or desk or entire floor) according to their needs and wants, such as three days a week instead of the usual five. “For those three days, the space is their HQ, after which they decamp to their own worlds,” says Arvanitakis. “It’s much more flexible and responsive to remote working.”

As for the physical spaces, asking multiple firms to contribute to the development has resulted in an “instantly authentic neighbourhood with an architecturally interesting streetscape,” says Arvanitakis. Each practice, she explains, was given a “sugar cube brief” — including plot size, building height and internal areas needed — and then left to its own devices, resulting in an eclectic mix of styles and materials. Facades, for instance, run the gamut from an undulating translucent material to a Corten-clad ziggurat. 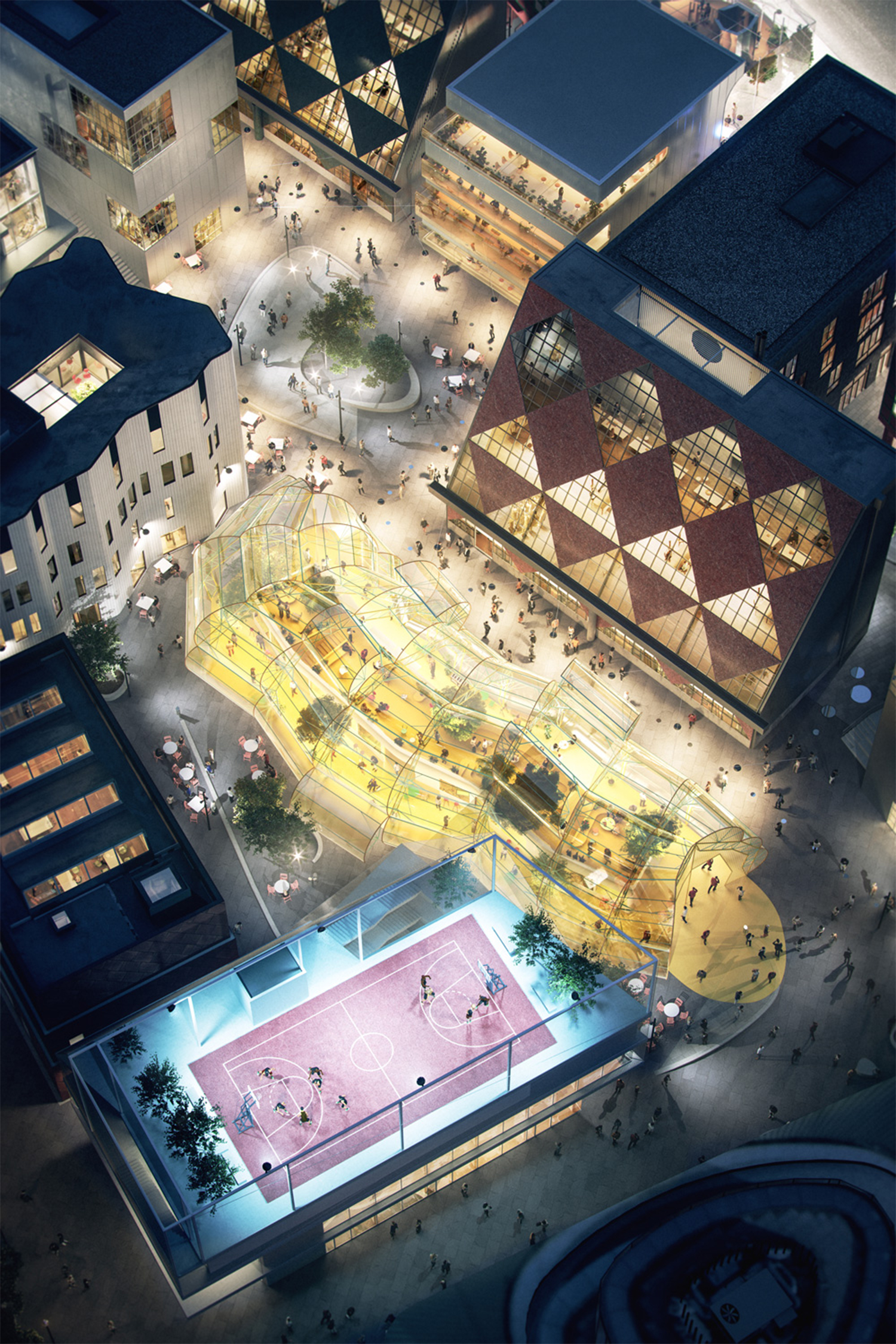 As seen from above, SelgasCano’s glowing caterpillar nestled amid the other buildings. 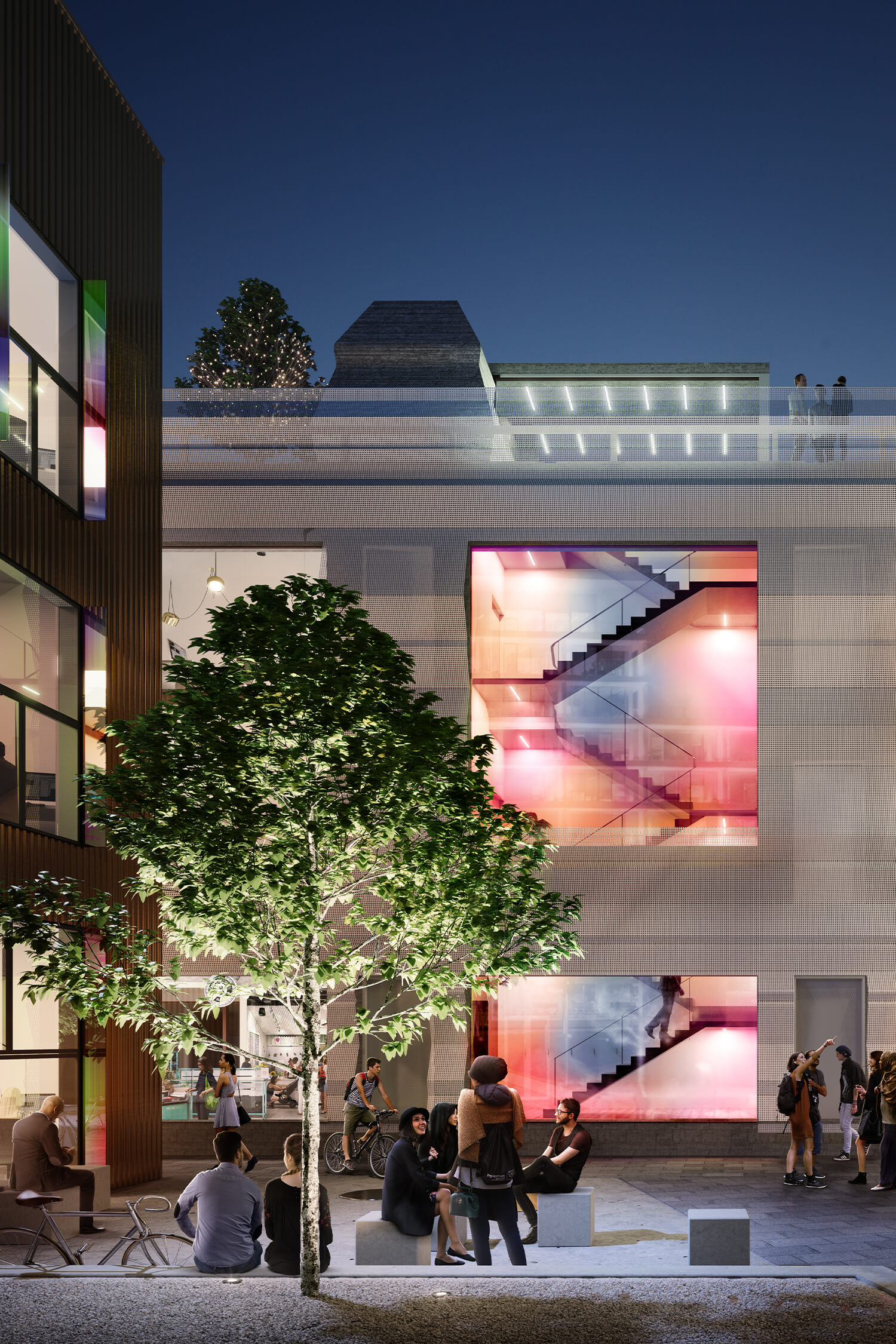 A building by HNNA with generous openings.

Internally, the buildings are just as diverse, providing 75 usable studios that range from 18.5 to 139.3 square metres; they are fitted out for photographers, ceramists, textile artists, video editors, sculptors and others. Adding to their appeal are communal event venues, outdoor terraces, a rooftop sports court and an open-to-the-public food court.

While Design District’s opening was slowed by the pandemic, the On/Off Office, as it turns out, holds even more promise now. “I think what we’re experiencing shows that we can work remotely,” says Arvanitakis, “but do we always want to?” The adaptive system she espouses allows for a more balanced lifestyle, allowing creatives to focus on their work instead of finding their next workshop.

The multi-use Design District development boasts offices by a range of firms to give local creatives a permanent home.